After using the jumbo Roccat Kone Aimo for a couple of weeks at the end of last year, Steelseries' Rival 110 comes as quite a relief. Not only is it a much more petite kind of mouse that's infinitely better suited to the overall size of my hand, but it's also significantly lighter and easier to move around a mouse mat, weighing just 87.5g as opposed to 130g.

Devoid of Robocop-style grooves and armour plates, this is one mouse that doesn't feel like it's contorting your fingers into some kind of industrial torture device. Instead, it's delightfully low-key and comes with a price to match, costing just £30 in the UK and $40 in the US. What's not to like?

All right, so it's not completely perfect. Despite the shape of the Rival 110 being roughly symmetrical, this is still a mouse designed with right-handed people in mind. Lefties would probably just about be happy with it for day-to-day office tasks, as its textured grip feels equally comfy on both sides, but they'd have to be particularly adept with their little finger if they wanted to use the two side buttons with any degree of regularity. Position that little finger too high and the buttons start to rub a bit, too.

Admittedly, this will probably happen if you're right-handed as well, as I often caught my thumb on the top edge of the nearest, larger side button when reaching for the other one. It's not sharp, per se, and certainly won't result in any open flesh wounds like the Logitech G603, but it's got just enough of a point on it that I can see it becoming an annoyance over long-term use.

Fortunately, the Rival 110's other four buttons are much less troublesome. In addition to the usual right and left click switches, which Steelseries claims are rated for 30 million clicks over the course of the Rival 110's lifetime, the scroll wheel doubles up as button number three, while the fourth one is found just below it. By default, the latter is set to toggle between two different CPI (counts-per-inch, which is essentially the same as DPI/dots-per-inch, or - in plain English - sensitivity) speeds, but each button can be configured however you like using Steelseries' easy-to-use Engine software. 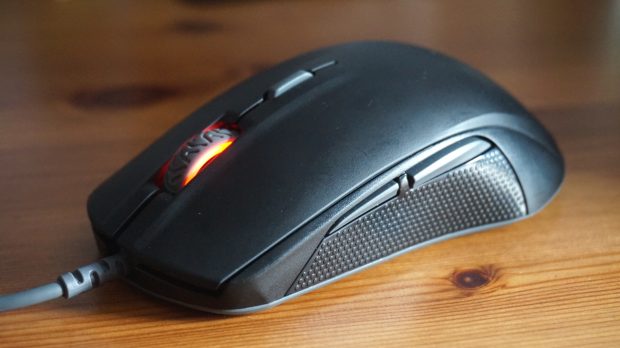 This includes keyboard buttons, macros and media keys, as well as the ability to launch specific applications, OS shortcuts, configuration options for other Steelseries products you might own as well as Engine apps for CS:GO, Dota 2, Discord and Steelseries' PrismSync lighting software to name just a few available options. You can also deactivate any button you please and record your own macros.

And just to make sure you know it's a 'gaming mouse', you can also adjust the RGB lighting on the Steelseries logo and scroll wheel to almost any colour you like, whether it's a plain block colour, one that shifts between different shades, or simply 'breathes' from dark to light.

With the aforementioned CPI speed, the Rival 110 maxes out at 7200. That's not as high as the Roccat Kone Aimo's 12000 DPI, mind, but unless you have the reflexes of a ninja zen master or bionic eyeballs capable of tracking tiny objects at breakneck speed, then anything above 3000 CPI is just overkill, especially if you're going to be using it for everyday office work as well as gaming. Personally, I found somewhere between 1200-1600 CPI to be the most practical setting, but if you're one of those esports types with faster reaction times than I could ever hope to muster in the twilight years of my late twenties, then at least the option's there if you want it.

By contrast, the Rival 110's lowest CPI speed goes right down to 200, which is useful if you're a dab hand with a sniper rifle and want maximum control over your movements as you track enemies down the scope. Again, the Kone Aimo offers a fraction more flexibility here, both with its even more glacial 100 DPI offering and the ability to toggle between multiple speeds instead of just two, but I certainly didn't feel like I was missing out on either count when I was mucking about in Destiny 2 and attempting to provide long-range support for the rest of my fire squad. 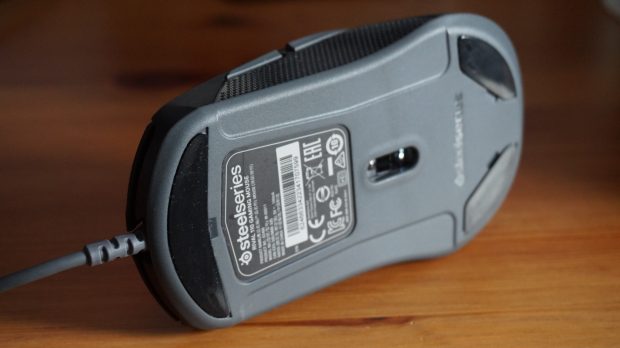 Meanwhile, the Rival 110's polling rate (how often your mouse tells your PC what it's doing) is pretty typical for a wired mouse, ranging from 125-1000Hz. Again, not something you'd probably notice in daily use unless you're a high-level esports-er (in which case you're probably not looking for an entry-level gaming mouse), but good to have nonetheless.

One thing that does make the Rival 110 stand out, however, is the fact you can both accelerate and decelerate its sensitivity to reflect your own natural hand movements, allowing it to reach up to twice or half its current CPI speed depending on how fast or slow you typically move it around your mouse mat.

It sounds like silly marketing guff, but for me, it actually did make the mouse feel more accurate and responsive. While I didn't feel the need to make it go any faster, the ability to slow it down in line with my hand movement was more useful than I expected, whether it was aiming down a sights in-game or simply following lines of text in an online article. That's not a bad feature to have on a mouse that costs just £30/$40, and personally I think it goes a long way in redeeming that slightly irritating side button problem it has.

On the whole, though, I liked the Rival 110 very much and claims a deserved place on my list of the top gaming mice. list. Mainly for its size and lack of go-faster gaming grooves, but its customisation options aren't half-bad either. Yes, the Roccat Kone Aimo's got more bells and whistles, but it also costs twice as much. If you're looking for something simpler and less expensive, the Rival 110 will do just fine.