If you click on a link and make a purchase we may receive a small commission. Read our editorial policy.
Premature Evaluation is the weekly column in which Steve Hogarty explores the wilds of early access. This week, he's being pulverised by trolls and torn to shreds by wolves in challenging roguelike Stoneshard.

Like any decent professional videogames journalist, I have spent the last ten years devaluing the term “roguelike” through overuse. Anything where a goblin politely waits for you to take your turn? Roguelike. Anything where a big slime can permanently murder you? You better believe that’s a roguelike. We would walk down the street with wheelbarrows full of roguelike. We burned piles of it just to keep warm. We introduced the word “roguelite” as a form of quantitative easing, but it failed to curb spiralling rogueflation. So now, faced with Stoneshard – a roguelike that’s really, very, incredibly, actually like Rogue – I’m left reaching for useful adjectives.

Stoneshard is a top-down, tile-based dungeon crawler in which time only moves when you do. It’s as if Superhot and chess stole Diablo’s car to go on a road trip to Durham. It’s like NetHack and Dungeons of Dredmor held hands and stared lovingly into one another’s eyes as they walked into the ocean. You are an adventurer in a richly detailed, open ended fantasy world piled high with quests, magic, monsters and loot, whose main superpower is the ability to – between any two footsteps – go make a tofurkey sandwich in the real world while your gracious opponents remain patiently frozen in time. 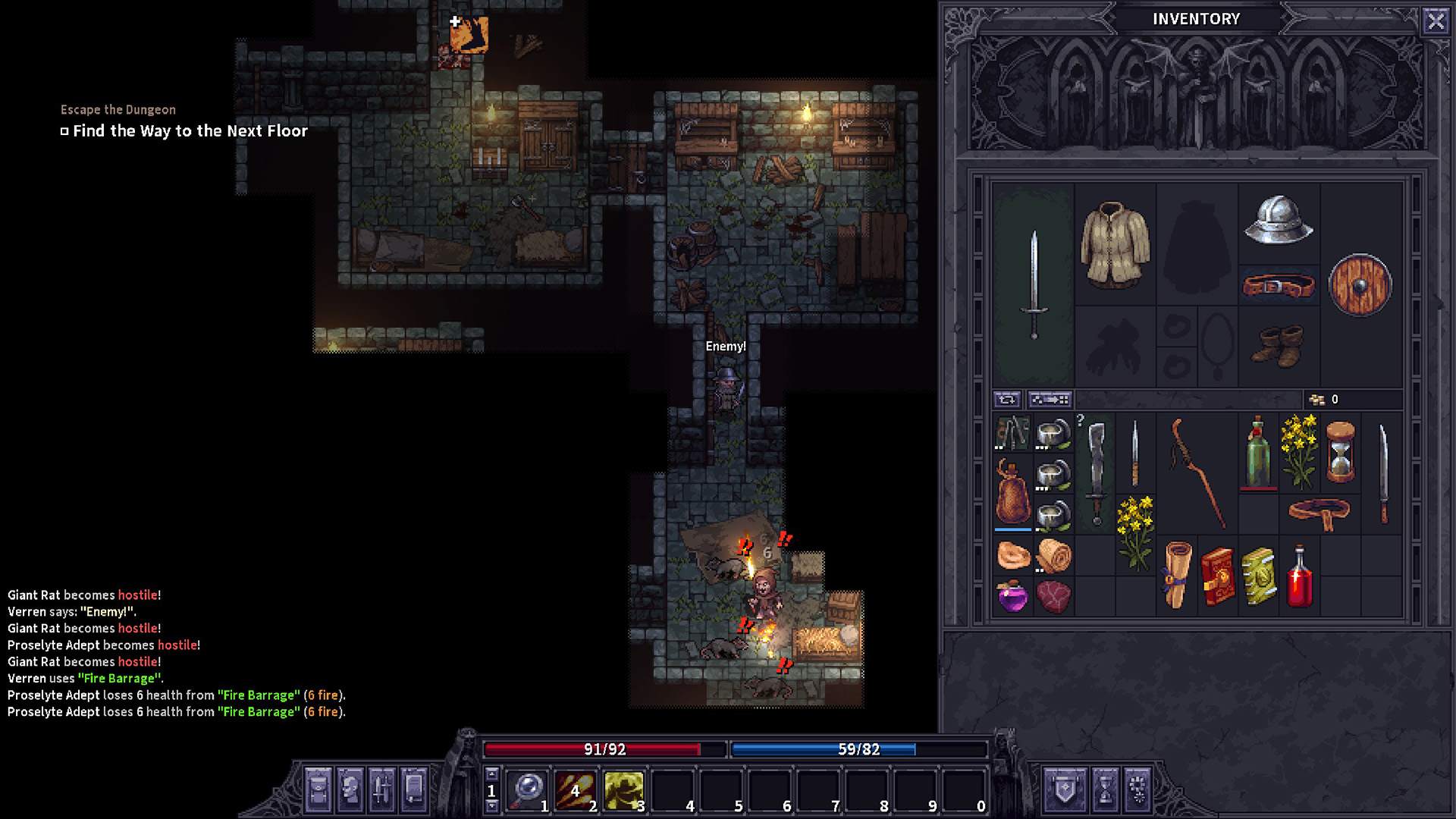 To mitigate this ability to pore over each tiny decision, Stoneshard is also blindingly difficult. Combat is driven by a detailed injury simulation in which individual limbs can be broken, wounds can bleed, and head trauma can leave you seeing things that aren’t there. Snapped bones have to be treated with splints and open gashes wrapped in bandages. And even if you’re able to remedy the immediate damage to your soft wet body, all of this evisceration leaves an indelible mark on your mental health, ratcheting up an entirely separate pain meter that must also be kept in check.

Booze can dull the pain, as can a hit from a bong full of ether, but both of those treatments increase your intoxication levels. If you’re drunk you become clumsy, or worse, you might vomit or pass out, which sends your thirst and hunger bars flying. So you might take a whiff of a special herb to sharpen your senses and sober up, which usually brings all of your various health meters back into alignment. The only victim of this repeated process of scrapping and healing is your fragile sanity meter, which is difficult to keep topped up and quietly erodes with the generalised trauma of being an adventurer. 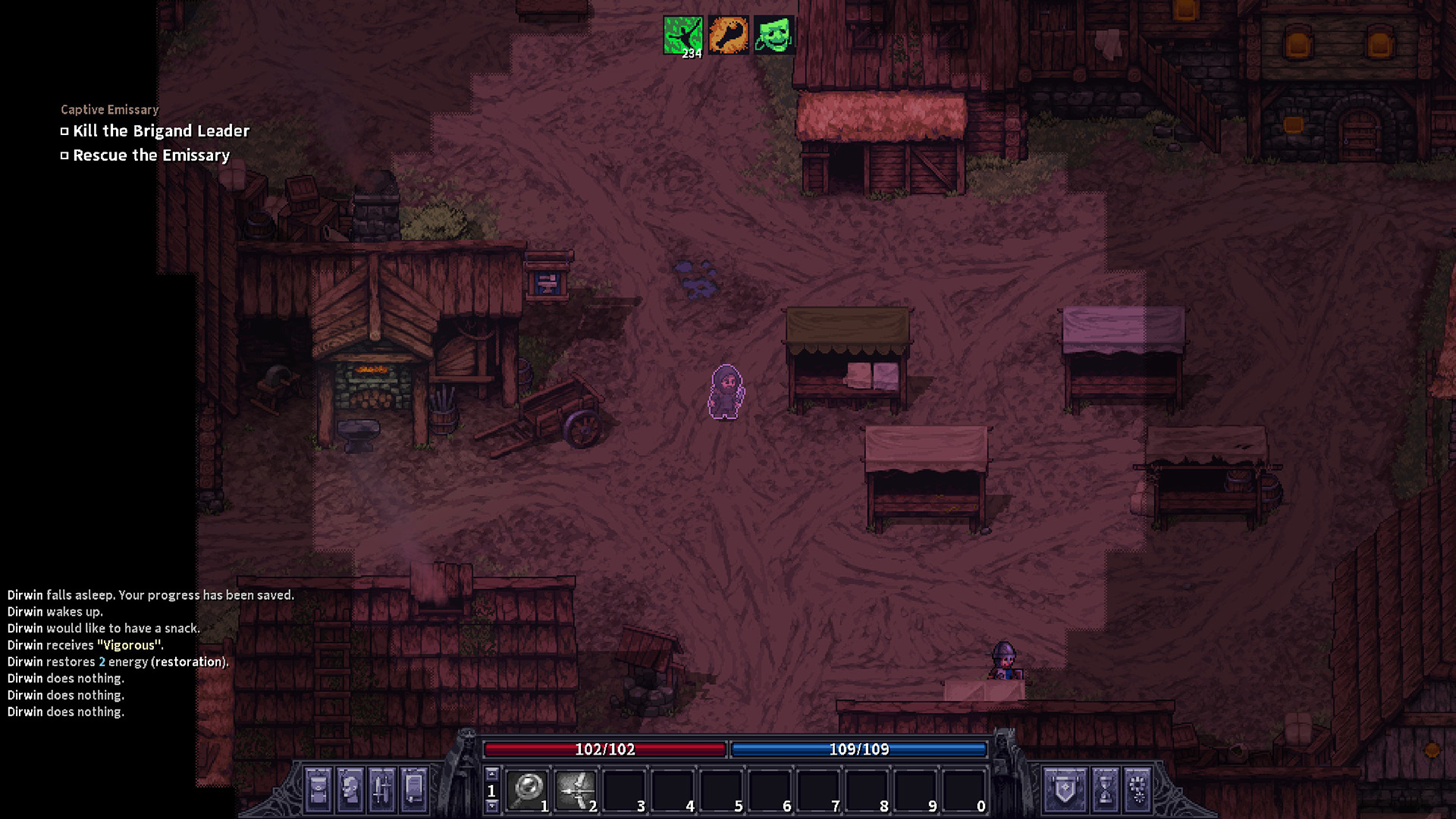 There’s a tendency among some indie developers to believe that all detail is good detail. Outdoor survival sim Scum, for example, keeps a running total of how many teeth you’ve got at any given moment, on the off chance that knowing how many molars are still inside your skull might somehow enhance your enjoyment of the game. But here in Stoneshard, all of this fine bodily detail really does improve combat. Breaking an arm is just rare enough to not be irritating. The risk of sustaining an injury you might not be equipped to deal with means you can’t charge into a fight with the unearned confidence of somebody who can simply wait 50 turns in a quiet corner of the dungeon for a health bar to replenish.

This attention to detail is lavished on a bunch of other systems, and learning which aspects of it you can safely ignore is the only way to make sense of Stoneshard’s often turgid hover-text. Some weapon and buff descriptions read like mortgage terms and conditions. This is an RPG in which your pyromancy is less effective in the rain, because wet enemies have a 50% resistance to fire magic. Food is especially riddled with stat boosts and penalties, some of which conspire against the integrity of your guts. You can go foraging in the woods for mushrooms, eat them all at once and go utterly haywire near a bush, vomiting uncontrollably before eventually dying in a drug-induced stupor as your wretched body attempts to turn itself inside out. 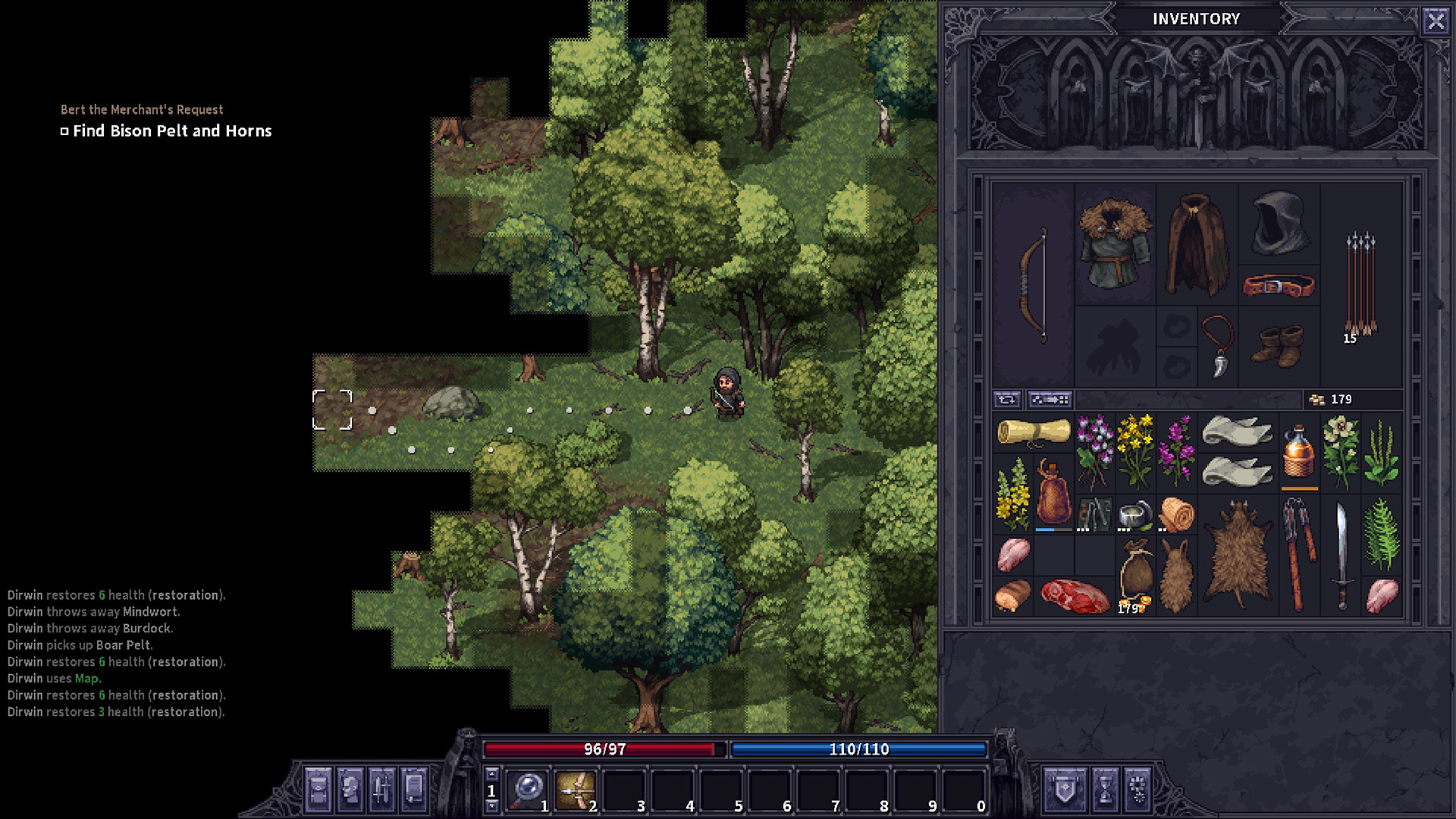 Every NPC in the game follows a daily routine, sleeping in their beds and showing up to work at market stalls. At one point I backtracked along a forest path where I had earlier murdered some bandits, to find birds picking the flesh from their rotting corpses. Occasionally your character will say something encouraging to themselves, giving you an optimism buff that lasts for a short while. This is a richly textured world filled with interesting little surprises. I remember imagining what NetHack would be like if you could sack off your quest for the amulet, stroll out of the dungeon and explore the world above ground. Stoneshard feels eerily close to what my tiny brain had conjured up.

What’s sorely missing from this early access version is all of the bigger picture stuff. Entire chunks of the game are still missing, enough to make it tough to recommend at this stage. The main plot abruptly vanishes into thin air, and what story there is stumbles over every fantasy RPG trope you could think of. The difficulty level is all over the place too, bound up by a punishing save game system that can wipe out hours of hard-won progress at the whim of a random encounter with a hidden spike trap or an overpowered archmage leaping out from behind a bookshelf. 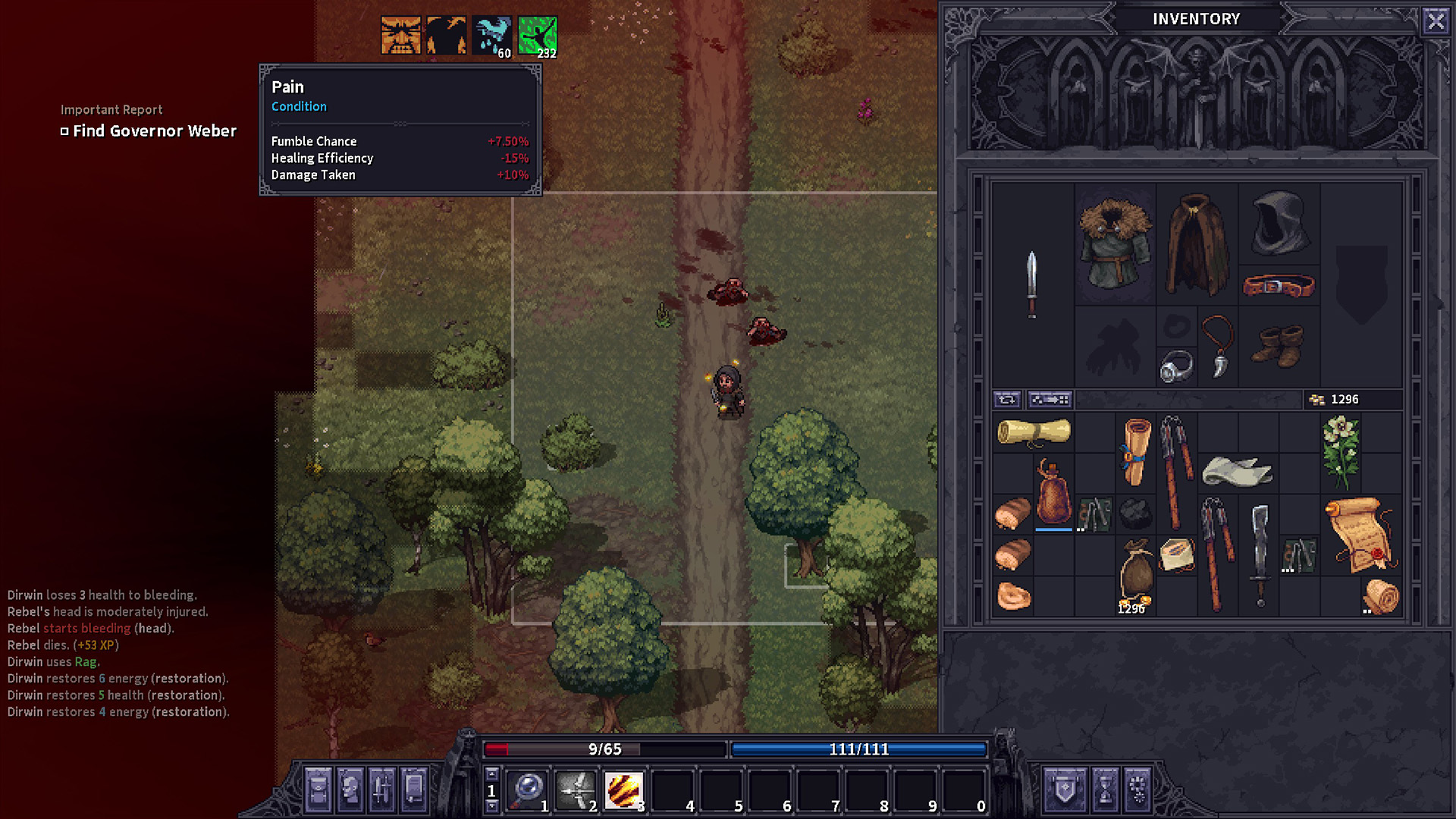 Stoneshard is a true roguelike in its unwavering insistence that each death feel significant – adding the ability to save the game at all seems to have been a concession – but in its current form the game’s semi-permadeath solution feels like a codge. Repeatedly trotting back to a tavern to bank your progress feels in opposition to the spirit of the game, a ritual that soon becomes an unavoidable chore, like having to take out the bins or wash your hands before you head out on a quest.

Hey, I don’t have any better ideas – if I did I’d be sipping Moet and laughing with all of the other incredibly wealthy indie devs aboard the big indie dev blimp – but the rapid pace at which giant, content-heavy updates are landing gives me confidence that a healthy balance will be found, one that accommodates the temperaments of every kind of player. Stoneshard already feels like a classic RPG in the making, an ambitious project with vast potential, a seemingly endless capacity to add depth and detail to its already intricate world simulation, and a uniquely roguelikey roguelike.