There's a dire force abroad in the open world of Subnautica, an irresistible entity hell-bent on warping or destroying everything that world contains, and just for once, it isn't the fucking player.

Soon after you dip your head beneath the game's lurid, teeming ocean, you're infected by a deadly bacteria with no known cure. Over the course of the ensuing 50 or so hours the game's helper AI - think TrafficMaster with copious hints of GLaDOS – keeps you updated about the slowly increasing percentage of bacterial cells in your blood. It creates a structural irony: as you delve ever deeper through Subnautica's notionally unspoilt terrain, raising eggshell habitats near fuming lava vents and gliding between the ribs of long-dead megafauna, the disease is making its own conquest of the fluids and catacombs of your body. While it has no direct impact on play, the bacteria is a gnawing presence, as remorseless and inexorable as an Ubisoft protagonist burning the fog from a mapscreen. It represents everything reductive and brutal about the open world, and everything that Subnautica is, on some level, trying to escape from.

Calling Subnautica an “open world” only tells half a tale, like calling Fez a platformer or Wolfenstein: The New Colossus a shooter, but the label features heavily in marketing materials and is a useful starting point. Cast up by the riptides of Early Access this January, the game gives your starfaring Robinson Crusoe the run of a vast aquatic sandbox, as deep as it is wide. It has a story you're free to ignore for long intervals, and plenty of incidental narrative to pluck from the crevices alongside needful things like crafting blueprints or kelp.

In broad terms it's the same kettle of three-eyed fish as, say, Far Cry, but where other open worlders I've played this year have long since clumped together like stray headphone cables in my brain, my memories of Subnautica are pixel-clear. Seeing the shadow of a leviathan on the sand all around as I rummaged under the belly of a crashed starship. Descending into a trench that, as my AI helpfully informed me, fulfilled seven of nine preconditions for human terror. Encountering a creature that, much like Tetris Effect, hypnotises its prey with strobing patterns in order to, unlike Tetris Effect (so far), bite your face off. And yes, dealing with the game's maddening house-proudness, which forbids the dropping of loose objects inside your subs or habitats. 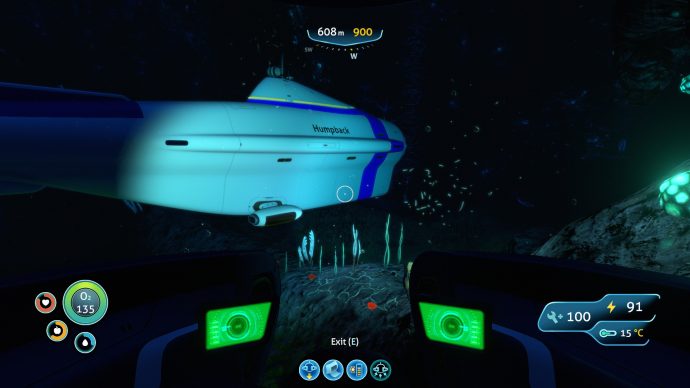 Part of the reason Subnautica stands out where this year's Ubithons have faded from my mind, of course, is that it isn't just an open world game. It's also (well, providing you pick this mode to begin with) a survival game, the open world's rather humbler cousin, with hunger and thirst bars to manage that check your bold forays across the map. Perhaps as a consequence, it lacks a quality inherent to most open worlders yet seldom actually bolted onto the definition: the will to domination. Games that wear the label “open world” are often defined less by openness than the callous, deadening process of translating that openness into territory and possessions. They are colouring books for armchair despots and expansionists, filled in region by region to expose the goods and opportunities that lie, like forgotten cluster bomblets, within them.

That colonising spirit is, admittedly, present in Subnautica's crafting systems, which tempt you to regard its places and species as inviting aggregates of raw material. And yet, you yourself are more than a plague upon this realm. Where the spread of the bacteria is represented in brutal, completionist terms, your presence is corrosive but on some level, benign – not as in actively benevolent, that is, but in the sense of an abnormal growth that doesn't jeopardise the liveliness of the whole. If the planet is a quarantine zone for the bacteria, Subnautica itself is a quarantine against its genre's propensity for rending and taking. It is an open world granted its own integrity, allowed (somewhat) to heal.

The key point of departure is that Subnautica doesn't really do combat and absolutely doesn't do aggression. Oh, there are a few weapons dangling high up the research tree, such as costly torpedoes you can launch to scare off leviathan-class predators, and you'll carve up no end of smaller fish for food. But this isn't a game where you kill indiscriminately, nor one that makes killing fun, and that's very much a political gesture. As Unknown Worlds founder Charlie Cleveland has outlined a few times, Subnautica began life as a quiet act of protest about virtual and non-virtual cultures of violence following the Sandy Hook shooting of 2012. Rather than the classic FPS games from which the developer's previous projects drew inspiration, Subnautica accordingly looks to Minecraft for an ideal of play in which competition and aggression come second to creating and experimenting. 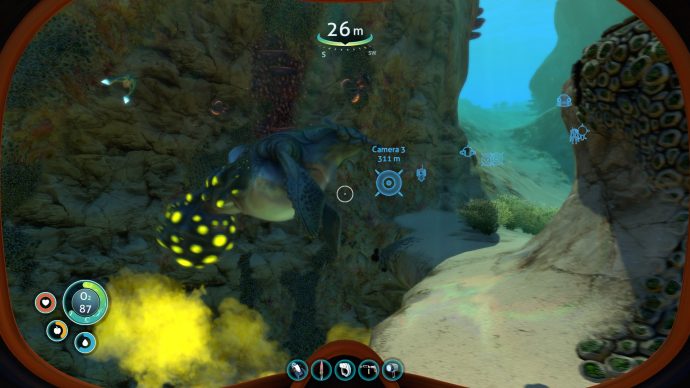 The game's primary achievement is that it doesn't throw out all peril along with the principle of progression through conflict – an achievement that shouldn't be as novel as it sounds. Partly, that's because lacking tools to defend yourself ensures that you are always teetering on the brink of flight, even in the summery shallows where the only hazards are kamikaze pufferfish. But the deeper source of anxiety - and a nicely submerged piece of transhumanist commentary - is that your character's body is not at home in the medium you're steeped in. You are not quite this environment's master key. Rather, you're required to augment your wallowing and contaminated human anatomy with prosthetics, from powered exoskeletons to submarines studded with cameras that evoke the networked perceptions of an octopus, if you want to survive what lies below.

In the shorter term there's your scanty oxygen to consider, a mere 30 seconds of breathing room before upgrades, which means that even grinding for resources is a gut-churning, risk-reward endeavour. The risks diminish as you expand the cylinder on your back, but the thought of asphyxiation is never far from your mind. Nor is the question of pressure, which gives Subnautica its “levelling curve”. Each of the game's three, elegantly retro subs has an upgradeable maximum depth, below which it will begin to collapse - an invisible boundary which discreetly gates access to certain biomes and story beats, and which stokes continual temptation as you spy precious salvage in a crevice, just below the point of implosion.

Much as Subnautica leaves room for combat without building the game around it, so it allows you to create havens and routes without invoking the practice of taking territory. Beacons can be dropped to create landmarks, bulbs of plastisteel grown like obscure coral formations to serve as hideouts and depots, but there's no binary flipping of regions into safe zones. 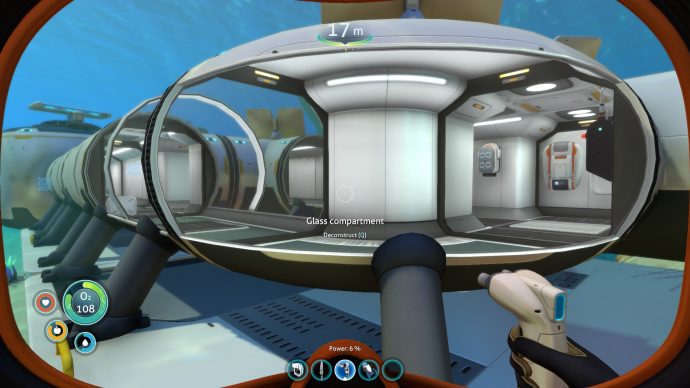 Local predators will continue to hunt nearby, attacking your habitats if they spy you through a porthole; some are even drawn to sources of electricity. Larger creatures such as John's best friends (and hottest young band of 1963), the Tread Walkers, will follow their paths across the seafloor undeterred, stamping flat any swimmers in their way. If a game like Assassin's Creed is a baleful ascent to omniscience, every nook's possibilities laid bare as map nodes are claimed, building structures in Subnautica feels like lighting candles in alcoves around an enormous cathedral. You will never have enough candles to illuminate every last corner, and the gargoyles are peckish.

Just as important as understanding how Subnautica breaks from genre convention is understanding where it compromises. If it began life as a soft rebellion against the callousness of both games and a society in thrall to the gun, it is nonetheless a work of entertainment – writer Tom Jubert compares it to a good Star Trek episode, in that the aim is to be enlightening but also fun. Its ocean might make you feel like a hapless trespasser, rather than the usual powerful outsider, but it also opens itself to you in subtle ways. Consider the light, for instance, which travels much further through the water than it should, and so transforms what should realistically be a silty blue haze into a riot of colour. It's a simulation in which the laws of physics are less important than the player's desire to see. 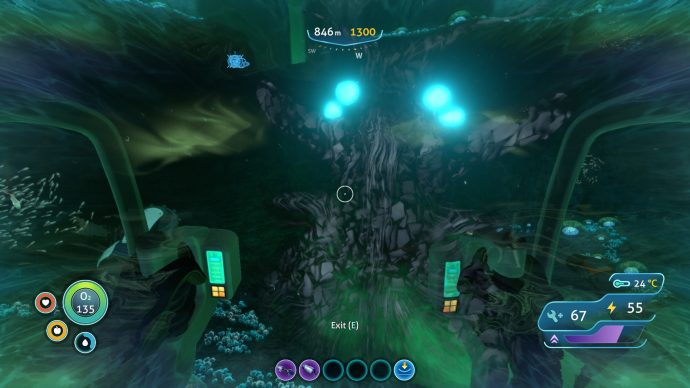 For all its elusiveness, Subnautica's ecology is also strongly in hock to the player's resource drive. Many of the creatures are designed as much for quick recognition and consumption as to resemble the results of aeons of evolution. Prey fish sport bioluminescent designs that recall desktop and phonescreen icons - lunar pink diamonds, darting green triangles, squeaky yellow ovals - allowing you to gauge differences in protein content in the dark. Some creatures exist to not just to make the game easier to read, but more entertaining to stream, a curious extension of the ecosystem into the boiling saltwaters of social media. In a 2018 Edge interview the devs revealed that the Reaper - a sea serpent which can seize your craft in its headlegs, trapping you in open-mouthed close-up - was added as part of a push towards horror after Unknown Worlds traced sales spikes to screamy reaction videos on Youtube.

If Subnautica is a conflicted affair, it is one of the few games that manages to fashion something elegant in the gap between the genre piece and the political artwork. It is at once more gripping than any blockbuster I've tackled in 2018 and more searching than many of the smaller, more openly activisty games I've played this year, too. I haven't even touched here on some of the considerations thrown up by its backstory writing, which (as you'd expect from the scribe behind The Talos Principle) is packed with philosophical digressions that chime intriguingly with the mechanics and systems that enclose them. It is that rare open worlder that mitigates the open world's virulence to the point that it starts to feel not just engrossing but actually worthwhile.

If you've got an itchin' to play Subnautica now, don't forget it's free on Epic's new store until December 27, as a bribe to tempt you away from Steam.