As autumn chill sets in I'm really enjoying the sun-bleached holiday pool theme of movement puzzler, Swim Out [official site]! It's absolutely delightful and puts me in mind of the 1920s, all stylish swim caps and geometry and a south-of-France holiday vibe. I dived in to see if the puzzling side held up and so far so good!

In the trailer you can see the neatness of the design and how the different top-down views of the pool denizens communicate their function.

Regular red caps swim up and down in a simple fashion, the person clutching the brim of a striped hat that looks like a bullseye from above is an obstacle taking up a square on the side of the pool, red cap swimmers facing upwards are doing backstroke and thus take one step longer to turn when they reach the end of their lap, the lady lounging on a lilo blocks two spaces... It's so NEAT! 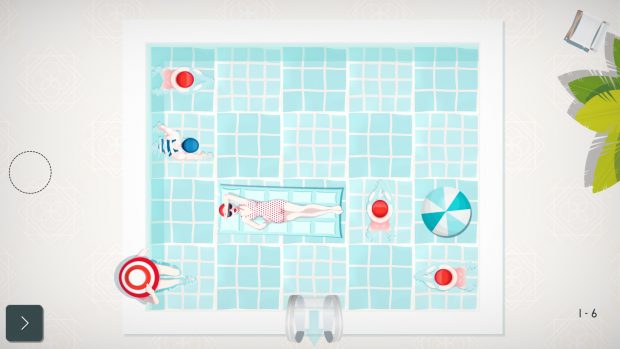 Two crucial game rules strike me as interesting, though:

One is that the onus is on you to get out of the way of everyone else. It's the entire premise upon which the puzzles rest, but I found myself getting secretly annoyed about the entitlement of these other swimmers who are so aggressively intent on their activity that if you get in the way you're a casualty and will hear the wrathful peep of the lifeguard's whistle. I got whistled and had to restart after a red cap diver decided to dive in even after I was CLEARLY in the lane! Other people are AWFUL and that is something my local swimming pool experience supports.

The other is that there is a kind of justice in that the lifeguard seems fine with you picking up a beach ball and deliberately flinging it at another swimmer's head in order to concuss them and force them to stop moving for three turns. I'd say that's probably the most peep-able offence you can commit short of attempted murder and yet the lifeguard turns a blind eye. I wonder if they are giving you a pass because they agree that the other people in the pool are awful and that the rules are stacked against you.

"Dive into the relaxing and refreshing atmosphere of Swim Out, a strategic, turn-based puzzle game, that will transport you into a sunny day by the swimming pool, the river or the sea. Plan each of your strokes wisely and be sure to never cross any other swimmer's path if you want to peacefully enjoy the sea view on a cosy chaise-longue."

And here's the features description:

Over 100 levels nestled in carefully crafted landscapes, soothed by the sound of seagulls, frogs or water splashes.
7 chapters combining :
- 12 different types of swimmers : each with their own way of moving around, ranging from the simple breaststroke swimmers to the more complex divers or cheeky water-bombing kids
- 12 different objects to interact with : buoys, fins, water guns, you can even ride a kayak!
- 6 disruptive environmental elements like waves, crabs or jellyfish that will give your brain a workout until you swim out!

I'm towards the end of the first chapter of seven and I have no idea how the difficulty curve will go as this is obviously still more of a training pool but it's such a cool look and unlike anything else I've played recently. 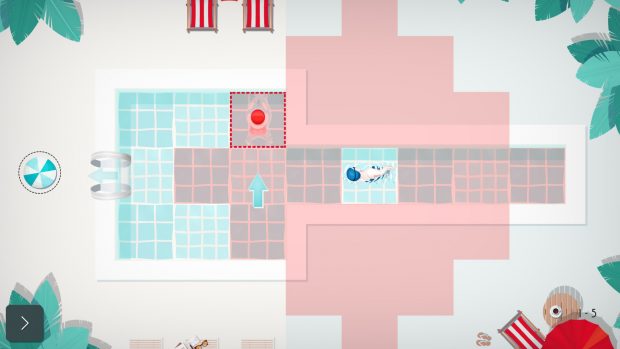