Taxinaut is a top-down space taxi simulator in which you can make pocket money by yelling back at people who insult you.

It's available as of today, and I have a real soft spot for it.

"Why is Taxinaut so big?" asked Alice0 during one of our recent knife fights. To emphasise how humble and tiny your little life is compared to the infinite cosmos, Alice, godddd. Taxinaut is indeed big, in a way that spacey games often are. The planet you start on is one of several around the local star, which in turn is a dot among tens of thousands. 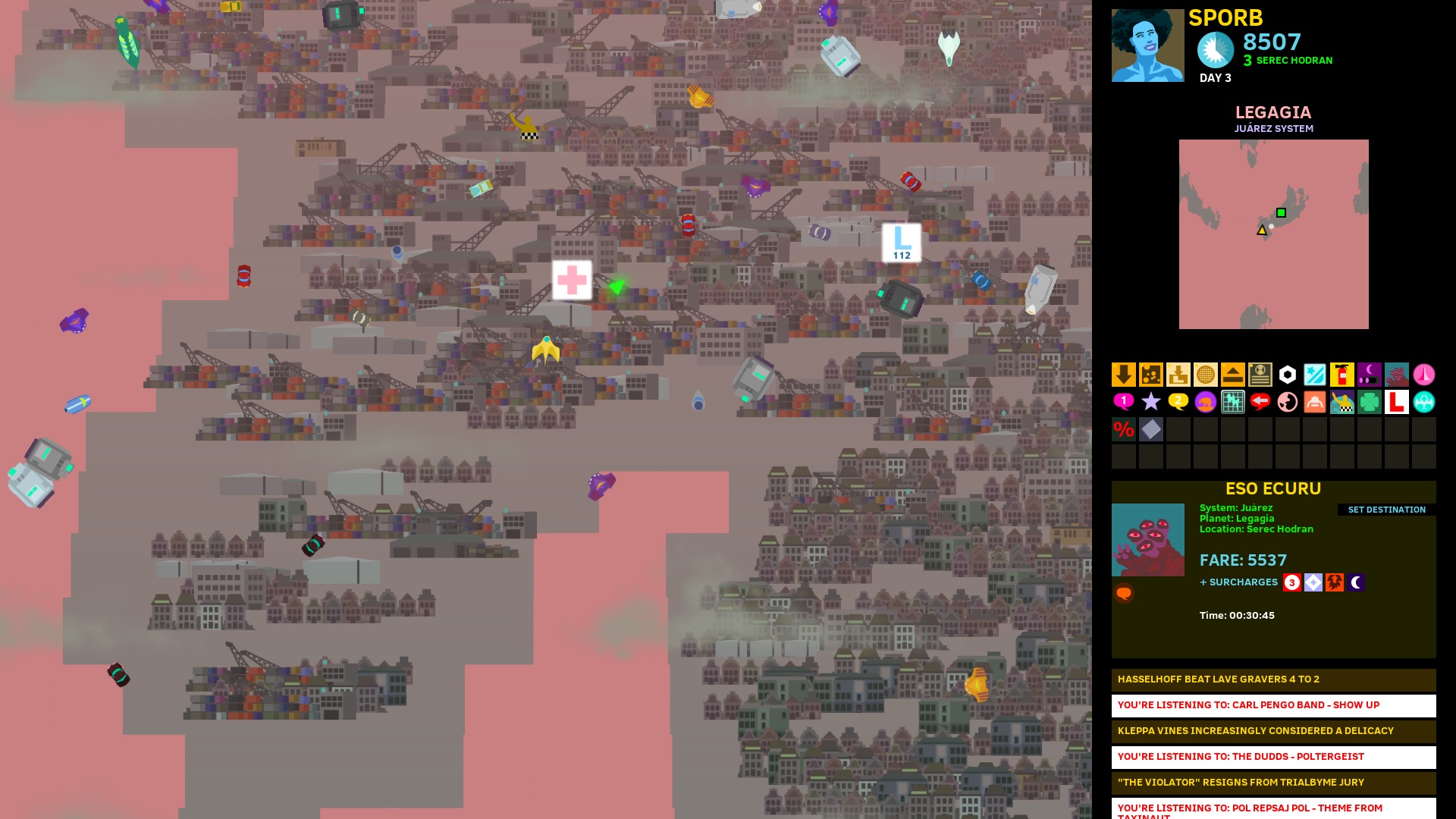 Of course many of them are alike. Sure, you could probably succeed in it without ever leaving the starting planet and still have the same experience on a reductionist level.

Your cab scoots around, you pick up passengers, you find the destination and take them there. Along the way you'll buy weird alien foods and booze, talk to people in bars, shops, and garages, and pitch up for the night in motels or any houses you're lucky enough to afford. You take people from A to B, but hey, FPS games are just about clicking on heads anyway, and RPGs are about making the number go up. Come on. Don't be like that.

It's both simple and complicated. All you're really doing is using the mouse to steer your cab around from icon to icon, but the details fill it with personality and a lovely escapist atmosphere. Picking up an interstellar fare means finding a travel agent (you may have to fly around asking the locals for directions), booking passage on a liner, then flying to the starport. That launches you into space, where you'll dock with the passenger liner and wait for your departure. Perhaps you'll do this several times if there's no direct route. 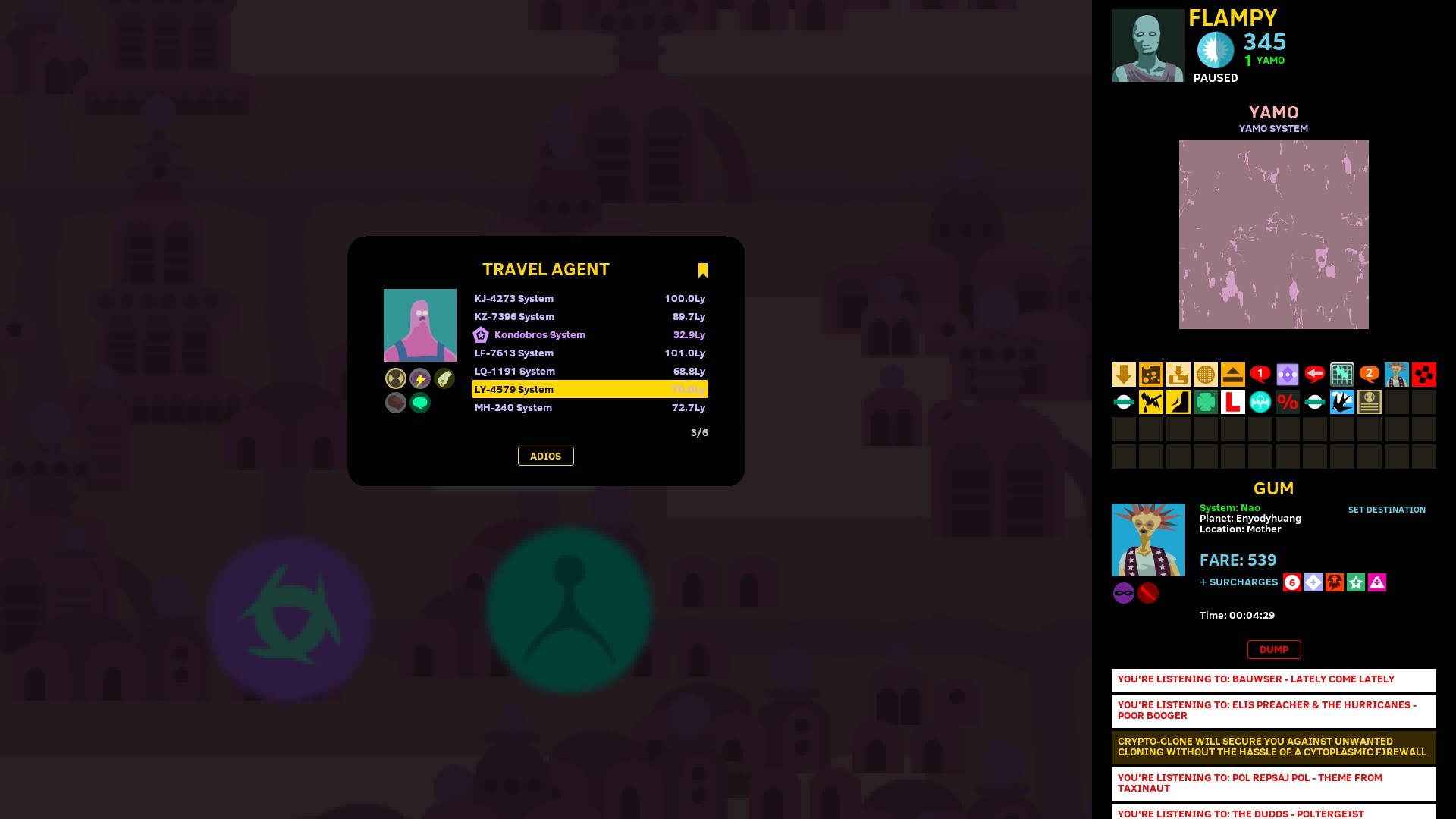 Then you'll fly through the new star system, perhaps having to stop off at the local space station to make a declaration at customs, depending on the local laws. Then you'll head to your destination planet and try to find the drop off point, all the while dodging hazardous traffic, and perhaps trading anecdotes or opinions or jokes with your passenger in the hope of squeezing more out of them, or placating one who's very grumpy that you had a couple of collisions on the way.

But if you don't fancy all that, it's fine. You can turn down any fare, or turf one out if they're turning to be too much hassle. The debt you start with is much easier to manage than it sounds, leaving you free to coast and take things at your own pace once you've done a couple of fares. You can get into fights, pick up weird diseases, be bothered by space insects, even attack other ships with the right equipment, although it's not a fighting game by any stretch. 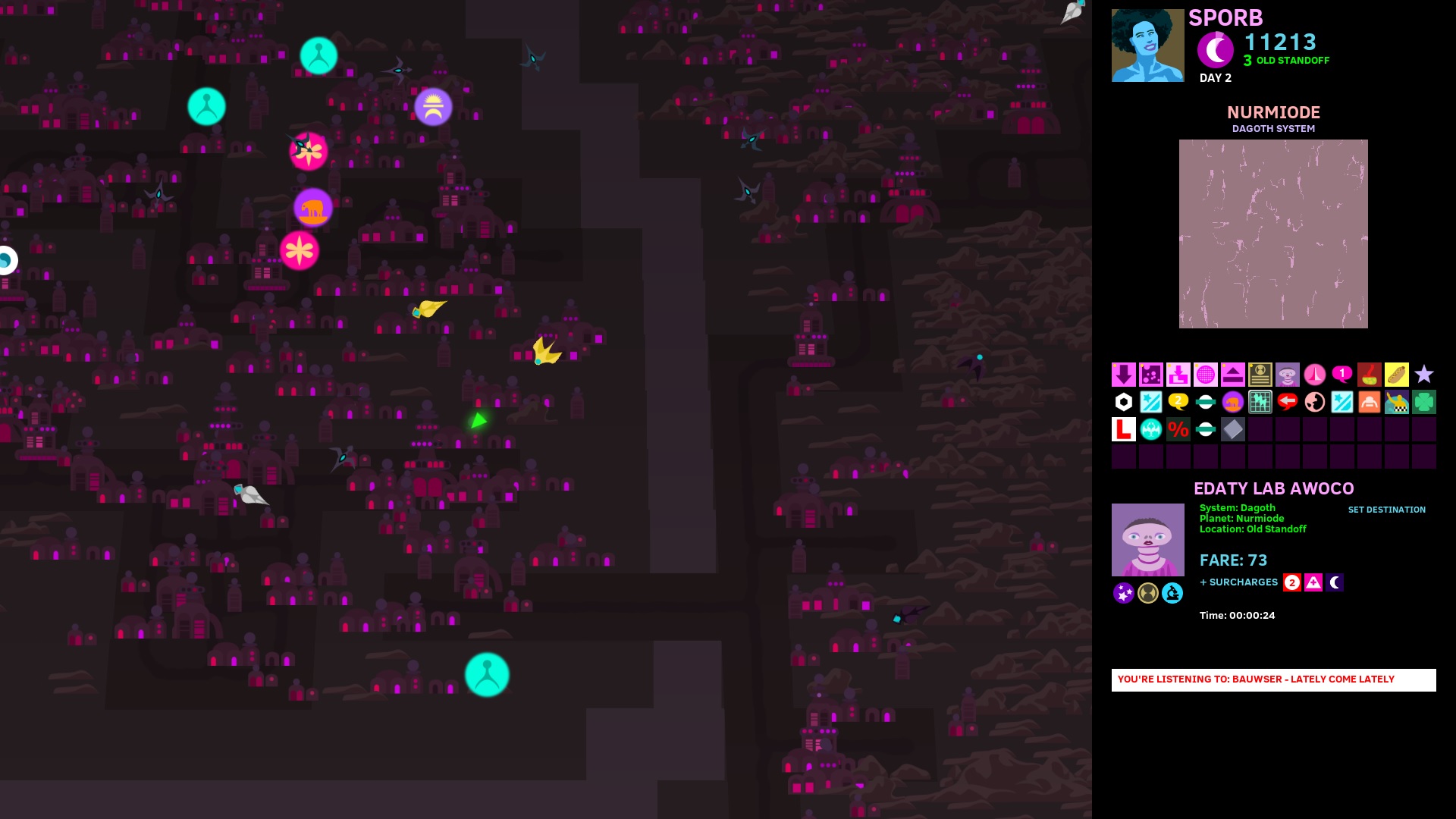 Or you can just keep your head down and drive people around, gossiping about popular books and new inventions, and reading news bulletins like "Opi-Daran says he punctured Glarence on purpose, that it's a legal play and that he'll do it again". It's a getaway. I don't recommend playing it all weekend, but dipping in for an hour or two is a real treat.

The first time I woke up at night I saw the planet had switched to a lovely deep purple pallette, and cooed like a toddler. Another planet was heaving with flying cars, while a third was a desolate wasteland, with most civilisation sheltered in a series of mass transit tubes from the giant robots patrolling outside. Its soundtrack is wonderful too, as Astrid pointed out last week. Just be aware that the opening is currently much more frustrating than the rest of the game, something its developer Mosgrom plans to address. Once you get used to dodging those pterodactyl jerks though, life gets a lot easier. 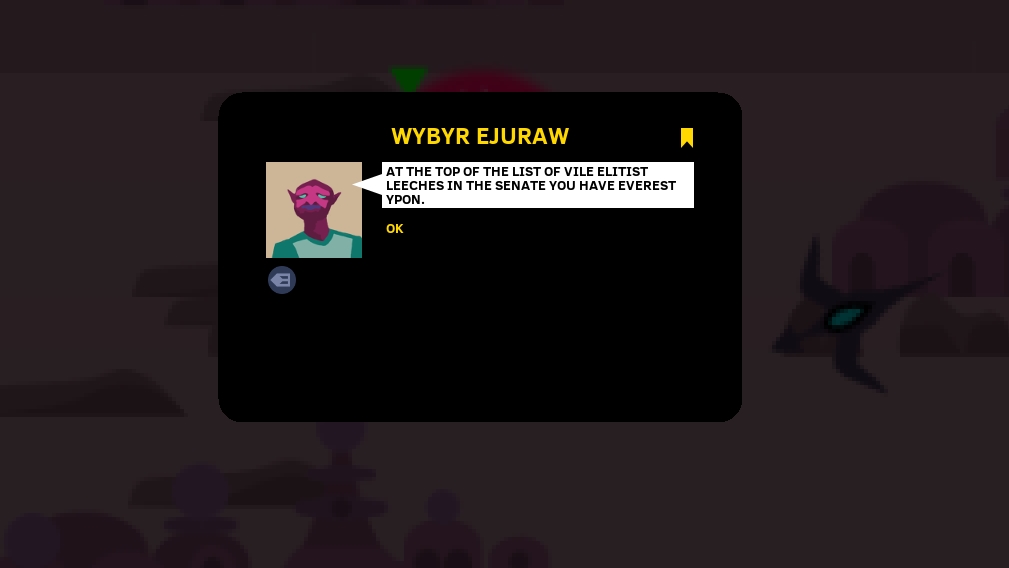 Taxinaut is in early access now. Mosgrom intends to add more stuff over time to fill all that vastness, but I've already spent several happy lunchtimes relaxing with it. It's currently going for $6 on Itch.io.