As an actual adult human being who still reads DC comics, I have to put up with a lot of BatBullShit. It's not the brooding that gets to me or even the weird and sudden flips between psychologically scarring street-level crimefighting and wacky Justice League space adventures. It's not the callbacks to events from previous decades that I don't care about or understand, and it's not even the fact that the world's greatest detective solves far too many problems by punching people until they stop moving.

It's the romance that bothers me. The sexytimes. I really don't care if Batman and Catwoman are making out on a rooftop, or tearing off each other's costumes in Crime Alley or some other unfortunate locale. It's not that I object to any of these mostly miserable characters having a bit of fun every once in a while, but just as in a computer game when two doll-like faces smash together and I'm supposed to pretend I'm witnessing a passionate and intimate moment, these caped and costumed comic characters don't seem real enough for anything other than the kind of sex-free coupling that Ken and Barbie might engage in.

How remarkable, then, that Telltale's Batman Series actually had my favourite romantic moment in any game I've played for a good while.

Telltale make games that ask you to make IMPORTANT DECISIONS. You know this because whenever you load up a Telltale game a splash screen tells you that the decisions you make will be very important indeed. If you didn't know this whole choices and consequences deal was something of a convention in modern games, you might be a bit worried. What if you make a decision that leads to your in-game romantic partner dying horribly, and the player character is so heartbroken that the very next choice is between walking into the sea and jumping out of a window? 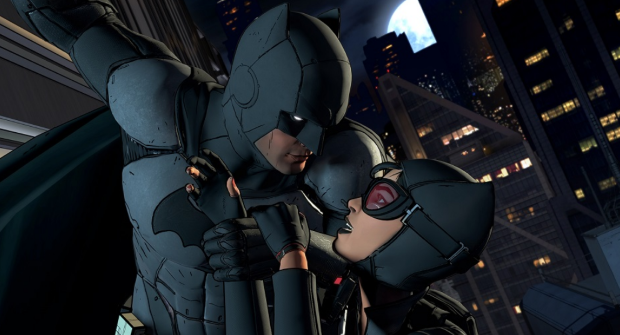 In truth, you're not going to be making decisions like that. Your favourite characters will die, especially if you play The Walking Dead (spoiler: THAT'S THE WHOLE POINT OF THE WALKING DEAD), but it's never really your fault. Maybe it's the player character's fault but it's not your fault, and there's an important distinction to be made there.

The game already knows what's going to happen - it's a scripted narrative adventure rather than an open world mucking-about game - so the choices you make inform how you're going to feel about predetermined events rather than determining what those events are. Choose to get closer to someone and when they eventually bite it (or get bitten by it), you're going to feel quite a bit worse than if you'd always treated them with disdain. Or maybe the other way around. Emotions are complicated.

Minor spoilers up until the end of Season 1 Episode 3 follow! Nothing plot-specific, beyond what I've already hinted at, but if you want to be surprised by the possibility of Cat on Bat action, please stop now. 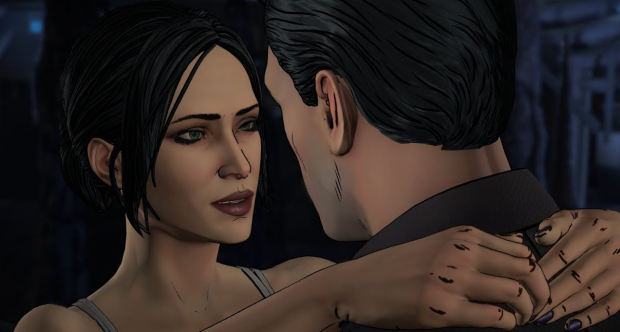 I'm happy to accept that Telltale games are about the emotional impact of decisions rather than the important narrative consequences of decisions. Hell, it can be both things at the same time; often the emotional weight of a choice is the important narrative consequence. That's a much more complicated point than the one I'm making here though. The point I'm making here is that I really enjoyed watching Bruce Wayne and Selina Kyle having some sexual tension and then chilling out with hot drinks instead of entangling themselves into a hot mess of leather and latex.

Chances are they can fuck. I don't know because I chose to back off and calm things down when it looked like things might be getting physical. There were too many horrible things happening, too many lives at risk (including our own), and it just didn't feel like the right time for anything more than a quick smooch. I fully support the idea of mid-crisis sex but only if both (or all) participants know exactly what they're getting out of it, whether that's reassurance, release, relief or something else entirely. My Bruce Wayne did not know what he wanted from Selina that night and he wasn't sure if she knew what she wanted from him.

And, of course, that meant his rebuffing her advances would make them bitter enemies because that's how these things tend to work out in poorly fleshed out relationship dramas. 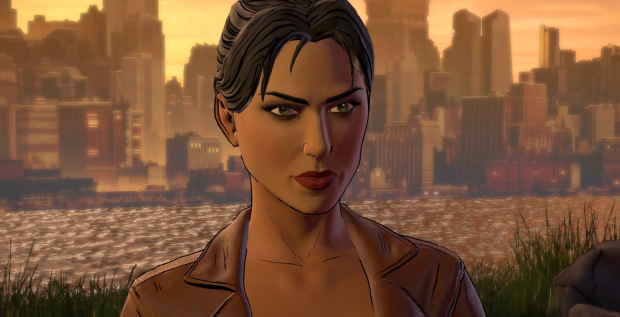 To my great surprise, it didn't work out like that at all. I expected the game to read my choice as a rejection but it didn't and the scenes that followed were my favourite in the whole first series of Telltale's Batman. They are humanising moments that might well happen in a slightly different post-coital context if the other road is taken, but they were meaningful to my take on the characters because they made them so much less than hot-headed sort-of-adversaries with sexual desires. Selina, as the person taking the lead on the seduction, is potentially in a vulnerable situation, made to feel ridiculous by rejection, but her reaction is as strong as anything that happens in any of the game's daft action sequences.

Both characters are shown to be capable of appreciating that a rejection of one moment isn't a rejection of an entire person, and their relationship suddenly seems much more mature than anything else about the game. It's enough to make me excited for season two, about which I hear good things from many people whose opinions I value.

That one moment of friendship and romantic possibilities is precisely what Telltale's model can excel at - a moment in which I felt like I'd decided how my character felt rather than exactly how they might behave, and this one time at least I was happy to trust the writers, artists and performers to show me how that played out.