I've never really been into A Song Of Ice And Fire. Even before the internet collectively turned on the telly show in its final act, I couldn't have told you what a Targaryen is. Even so, A Game Of Thrones: The Board Game is one of the best tabletop games I've ever played, its cardboard kingdoms a beloved backstabbing battleground during my uni days. Today, developers Dire Wolf Digital brought Fantasy Flight's stellar tabletop tactics to PC - an adaptation of everything but the dagger held behind your best friend's back.

I might have no idea what a Stark is, but I know damn well folks are happy to ignore you up there in the North. At least, until you bring down a late-game snowstorm.

Here's the deal. Every round, each player lays down a series of hidden commands on each region they control. Once everyone's made their plans, everyone reveals - and we see where each kingdom has chosen to raid, rally, assist or reinforce. Named characters are thrown into the mix as wildcards during combat, and every so often the wildlings will descend to wreak havoc, forcing cooperation between the warring states - if only for a moment.

The goal is to be the first to overtake Westeros with your castles and banners. Along the way, however, you're fighting for a space on three influence tracks - determining your place in the turn order, or resolving ties for all other forces in the game. The adaptation even includes the Mother Of Dragons expansion, letting you fill out smaller player games with neutral "vassals". 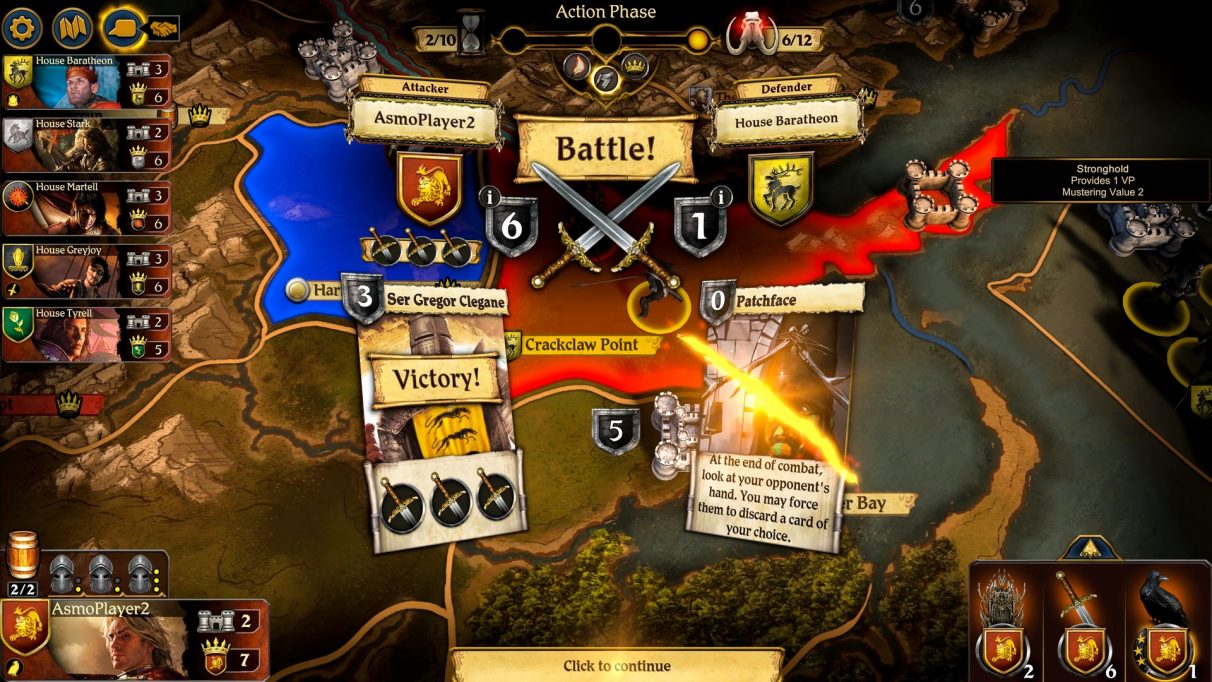 Really, though, A Game Of Thrones is about stabbing your mates in the back. It's about the shock of seeing a friend renege on their promise to have their navy assist a decisive battle, or the sideways glances between folks who know that smug prick with The Throne and The Crow needs taking down a peg.

I can't tell you if this videogame adaptation is any good, or if its ten "story challenges" can evoke the feeling of sitting around a table with your scheming friends. But I can tell you that plotting my way to an unsuspecting victory was some of the best damn board gaming time I've ever spent. If Dire Wolf can reignite even half of those bitter betrayals, this may be a great alternative to ill-advisedly meeting your pals for another tabletop meet.