Have you ever seen a Banbaro? Oh, you sheltered child of reality. They are quite lovely creatures. Banbaros are large herbivorous snowbeasts with big, chunky antlers, presumably used for bickering and clashing with other Banboys down at the Banbar on a Friday. Bantlers. Ignore my jokes, they’re beautiful creatures. Serene, tranquil, perfectly at home in the cold ecology of their glittering wintry domain. I murdered one this afternoon.

Not a real Banbaro, of course. I’m not heartless. No, I killed a fake Banbaro in the slush and sleet of Monster Hunter Iceborne, the upcoming expansion for popular leather hoarding game Monster Hunter: World. I got to try a bit of it at E3 today, and it’s basically more of that lizard pestering and pelt skinning that I heard you like. In this add-on, we’re off to a big old icescape called Hoarfrost Reach. Dave has already rounded up a lot of what we know about this snowy land.

But as someone who last week thought, “I’ll just play Monster Hunter: World for an hour or two as pre-E3 homework”, and then found themselves playing it every night thereafter, I finally understand the appeal of this snarling world. So I thought it good to give you some idea of what to look forward to. In essence: look forward to fighting more toothy things.

In the middle of my fight with the Banbaro, for instance, another beast showed up. The Beotodus. It’s a snowfish that swims around in the soft drifts and snaps at you with barbed teeth. I don’t enjoy him. Later I fought a Tigrex, which is a big, reptilian wing-haver. Imagine an enraged bat the size of a bungalow sporting a Komodo dragon's flaring nostrils. During our struggle, he pooped mutliple times. I did not get to see the Velkhana, the icy elder dragon of the expansion. Though I understand it to be the biggest of the added bads. Big enough, anyway, to have a huge replica of it built on the E3 show floor. 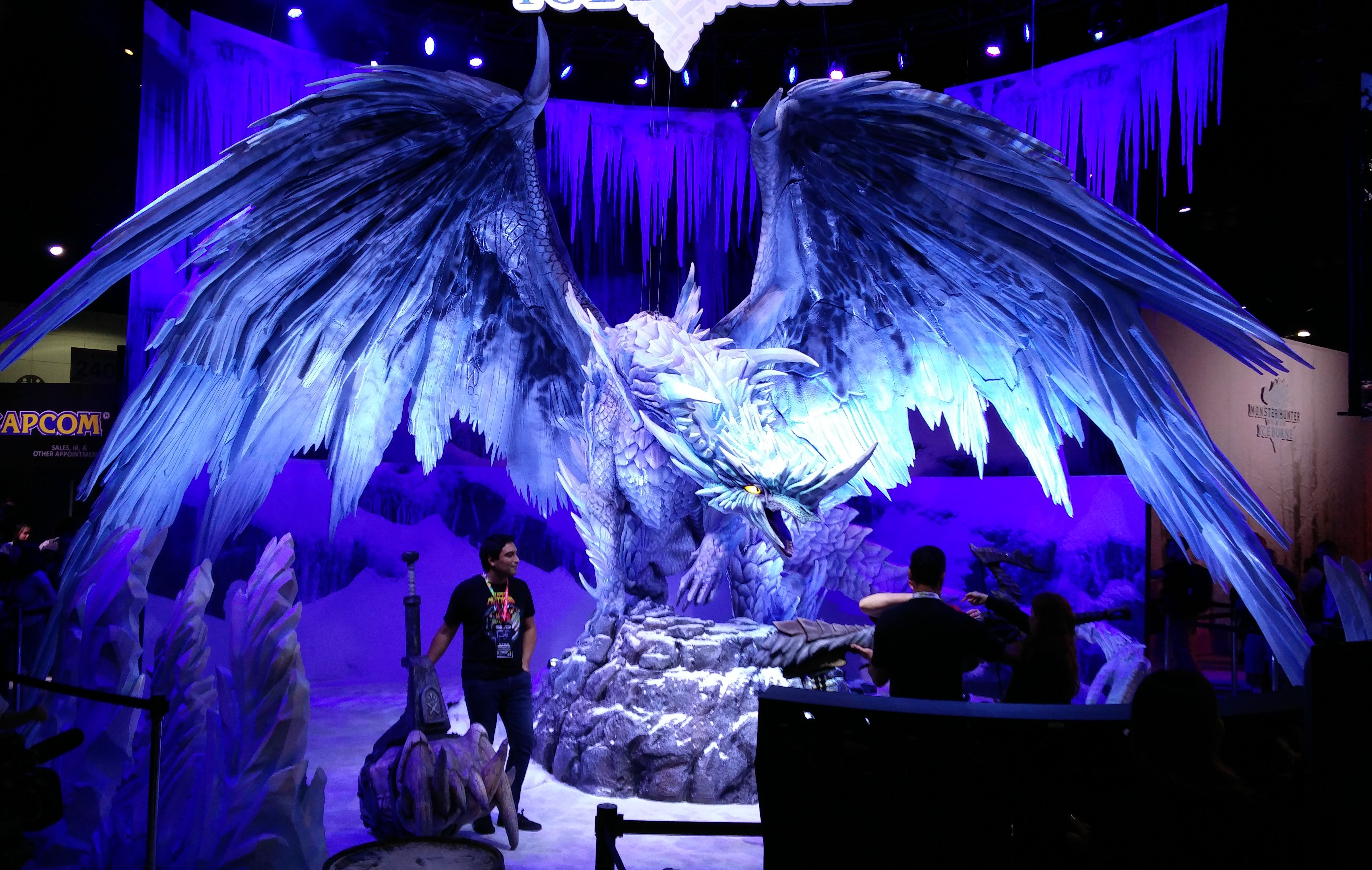 There are some new moves too. You can shoot your slinger with your sword out now, and this tweak is so basic and handy that it’s a wonder it wasn’t always this way. I also got to try the Clutch Claw, a hookshot that lets you grab onto beasts. I grappled onto my friend the bungalow-bat, for example, while he was tired (the only time using this device really works) and performed a big superslashing attack to his lower bod. I think it does different attacks depending on where you grapple on, but I didn’t get much chance to try it out. Bats McAngry got annoyed and became enraged, a bellicose state of monstering which means you can no longer use the Clutch Claw.

But enough about monsters, let’s talk weather. The winter of the expansion doesn’t add too much to worry about (at least from what I saw). It feels more like an injection of steamy-breathed atmosphere than a deeply game-affecting thing. There are big, glimmering caves, and chunks of ice floating in streams like lost ice cubes. Sometimes large glades of soft snow will see you wading slowly through the white waterfluff. But this is pretty much the same effect as swampy water in the main game. On a slightly more pressing level, the cold will sap your stamina very very slowly. 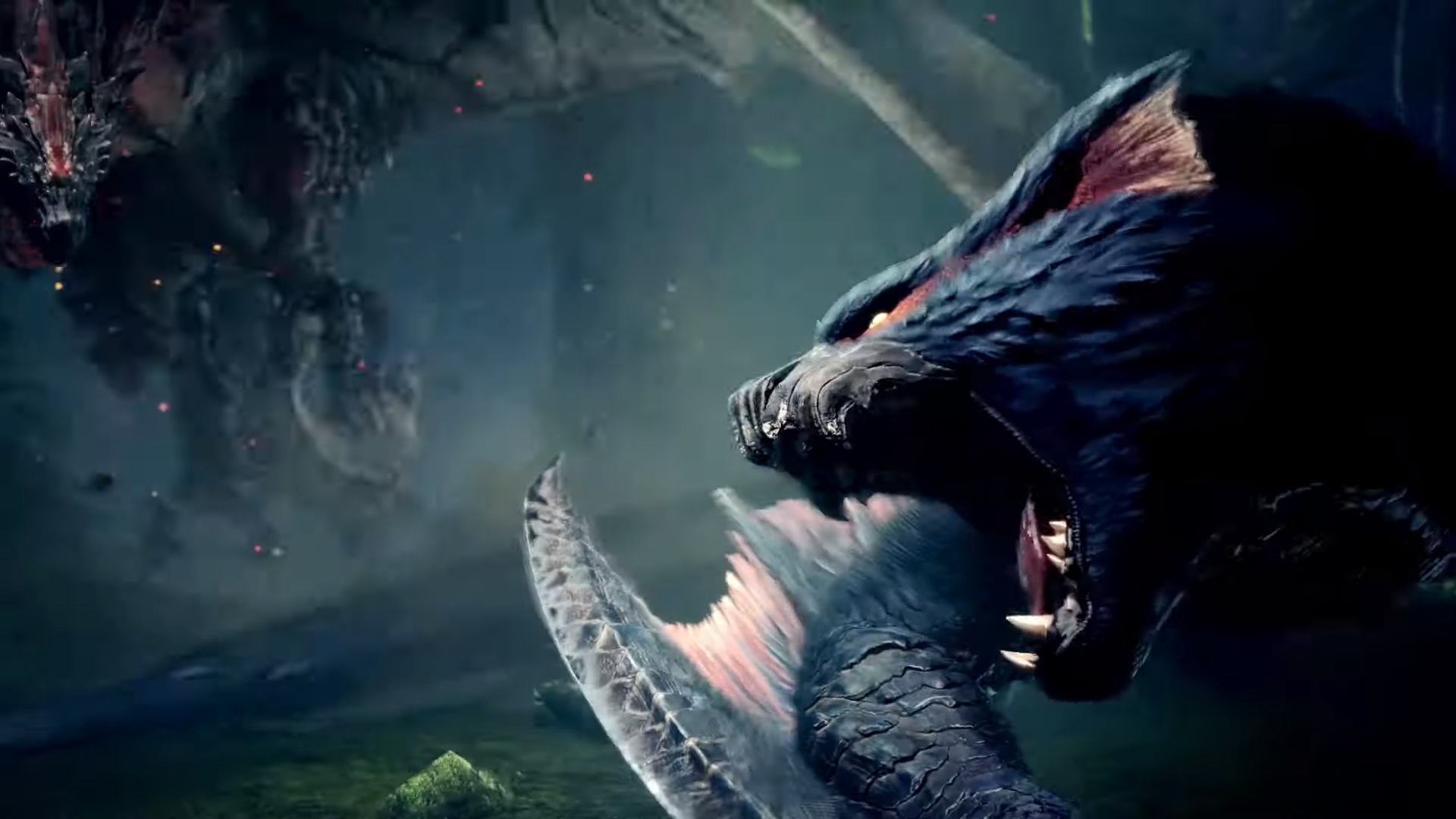 Yet avoiding this only involves periodically slugging down a hot drink made from chilli peppers. That’s not a huge demand, but it does mean fights can sometimes be interrupted by a flashing stamina bar, causing you to high-tail it into an icy alcove where you can safely pour scalding, spicy water down your throat. It’s not a massively game-changing thing, but it is more of that the Monster Hunter sense of mid-battle improvisation and panic that I’ve learned to recently enjoy.

You'll only be able to play this expansion if you've beaten the final boss of the main game. If you have any monster-bashing console pals, they’ll be able to give a fuller picture of the game when it comes out for them in September. But we PC chumps have to wait until real world winter. But maybe that long wait until the cold months is a good thing. It gives me time to get my bone-covered character up to scratch before I fight that Tigrex again. Until then, I’m off to throw some Banburgers on the Banbequeue.