Few things are as terrifying, or as potent in piercing morning’s sedate veil, as the sudden outburst of an adult Canadian man, shrieking “THE SHAPE. THE SHAPE IS COMING,” through your desktop speakers.

In the Canadian adult’s defence, however, one of those few things is The Shape itself: the Big Bad of stealthy co-op spookfest The Blackout Club. A relentless spectral apparition, only visible as a humanoid heat-blotch when you close your (in-game) eyes, The Shape is an omnipresent threat in TBC’s uncanny suburbs, and the labyrinths beneath them. Whatever procedural fetch quests you and your one-to-four fellow players are tasked with during the game’s 10-30 minute matches, The Shape will factor into your game plan.

Should any player fill up an invisible ‘sin’ meter by, broadly, being shit at stealth, The Shape will materialise and hunt them down. If it catches them, it grasps hold of them and inhales their cognitive abilities through their sinful faces, leaving them in a trance that can only be broken by another teammate. Sometimes this satisfies The Shape. Sometimes, it decides to start coming for someone else.

I love The Shape. In fact, it might be my favourite new idea-thing in a game this year. A macro-penalty that looms over any micro-instances of stealth fuck-upery, it provides real, palpable tension. Any mission can go horribly wrong at any time with The Shape in play, providing a constant incentive for players to work together. Prancing around outside the shadows isn’t just letting you down, xxBongWolf69xx, it’s letting the whole team down. 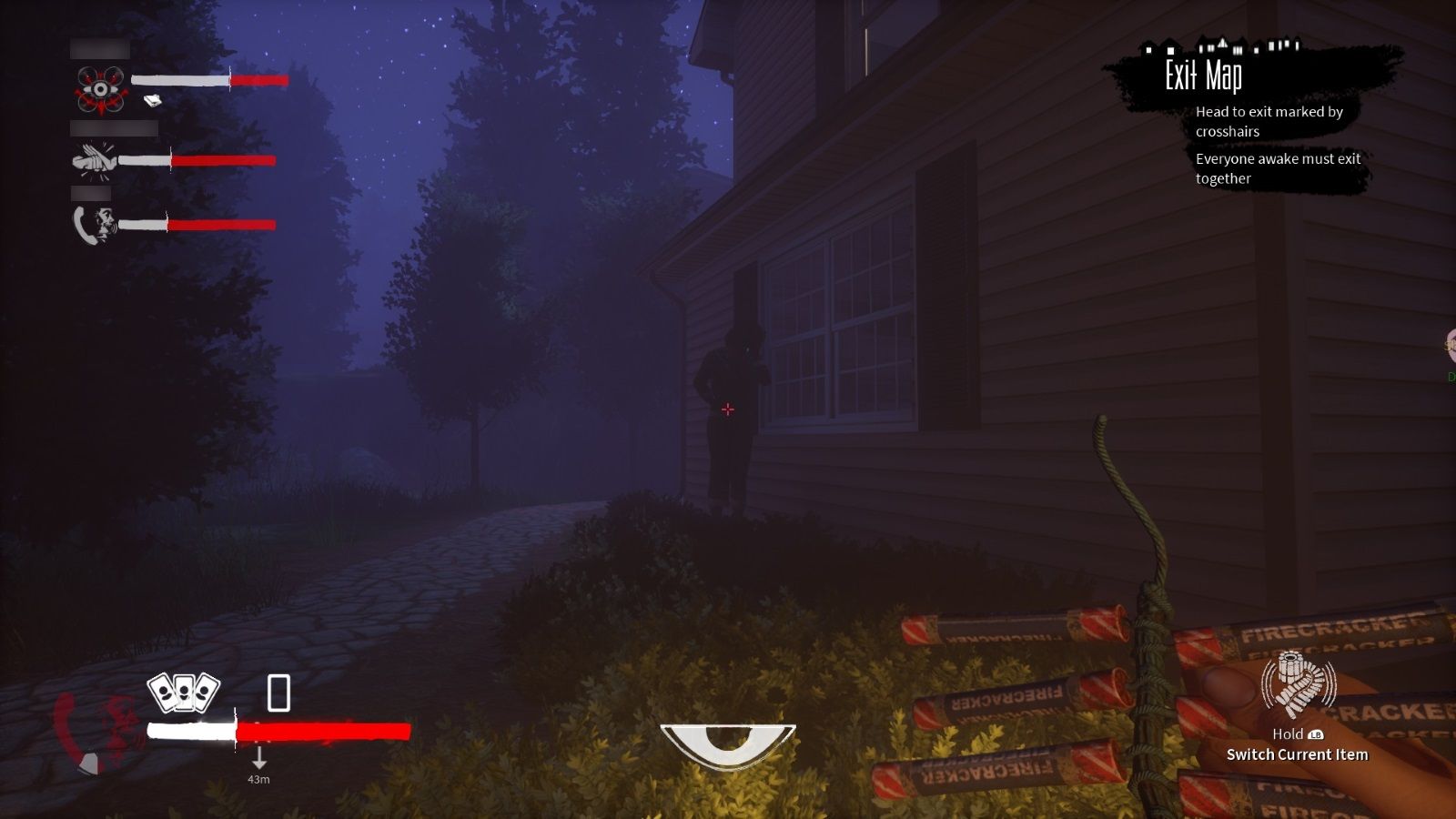 The Shape also reinforces the hostility of this alien, twilit suburbia, by reminding you that there’s always an authority figure lingering in the dark, tallying up your perceived sins. This is particularly resonant given the game’s homage aesthetic. I want you to go and play, or at least watch someone play, the game’s phenomenally effective introduction for yourself, but if I throw out the phrases ‘sleepy town’, ‘plucky teens’, ‘strange happenings’, and ‘1980s lighting, albeit in a modern setting’, I’m guessing you can fill in the blanks.

In this familiar (arguably overpopulated) thematic territory, The Shape makes perfect sense, pitting clandestine teenage defiance and subterfuge against pure evil in the guise of an authority figure. The theme spreads further, too - the game is named in reference to the periods of narcolepsy plaguing a town, and many of the enemies you encounter are sleepwalking adults. For example, the pyjama-wearing soccer moms who stalk the town’s lawns, faces obscured by sleep masks. They’re hypersensitive to loud noises, and wait to drag players too wounded to resist far below into the labyrinth.

The game doesn’t just allow you the knuckle-gnawing terror of scrambling into a closet and praying to be forgotten about. Oh no: it also gives you the chance to be that clumsy, hapless kid who decides to start eating a bag of crisps while everyone is hiding out in the bushes. That doofus, that absolute clown. Indeed, the atmosphere of slightly goofy but still acutely disturbing horror is established so well that it just makes sense that things have to go disastrously wrong sometimes. Depending on the people you’re playing with, this can be just as much fun as pulling off a mission flawlessly. 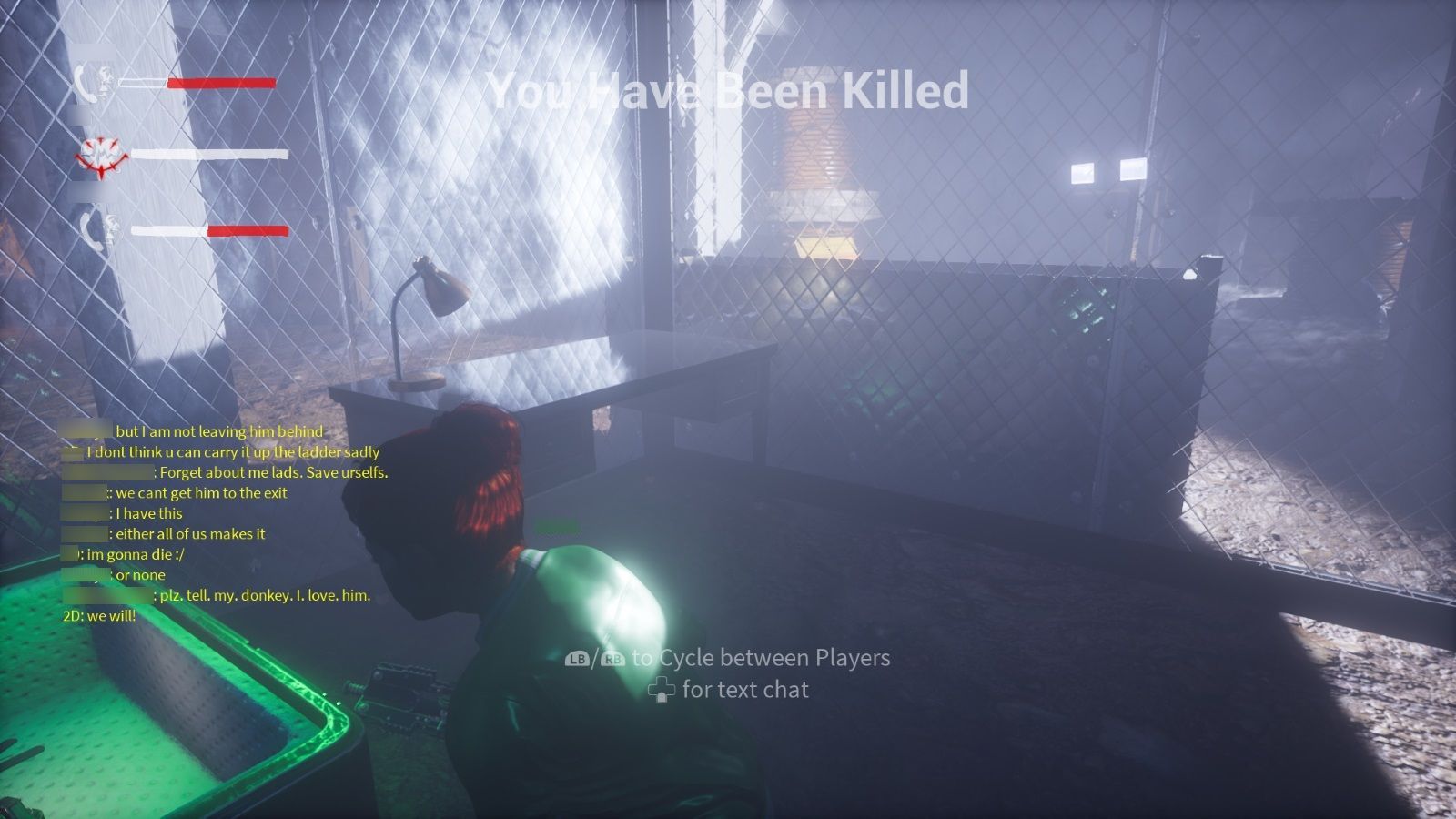 Each mission starts in the Blackout hub; a gutted, glitzed-up train car from which you can purchase upgrades, swap out items, buy cosmetics, and dab, dab, dab emote until the pale moon falls from the sky and shatters like a ghostly egg at your merriment. You also kick off matches here, either by hosting for other players to jump in, or matchmaking with randos. You can play solo, if you’re up for a challenge - but it’ll mean there’s no-one to rescue you, should The Shape come callin’.

I don’t know if I just got lucky, but I get the sense there’s something about the game’s spirit that encourages not only co-operative play, but genuine teamwork. It’s the 1980s teen film thing, I guess, spilling like unconscious roleplay into the way players engage. Whatever the reason, it’s a powerful and wonderful thing. During my first few matches, while I was learning the ropes, it felt like I was following around my smarter, more capable siblings, learning tricks to outsmart a seemingly insurmountable enemy.

Seconds from being caught by a sleepwalker, a teammate I had no idea was perching on a rafter above me dropped down on to the walker’s back, pinning them down just long enough for me to leg it up a set of stairs. In another match, pursued by The Shape, we all climbed another player’s grappling hook to the roof of a house, where we huddled in silence, waiting for the terror to saunter on past. 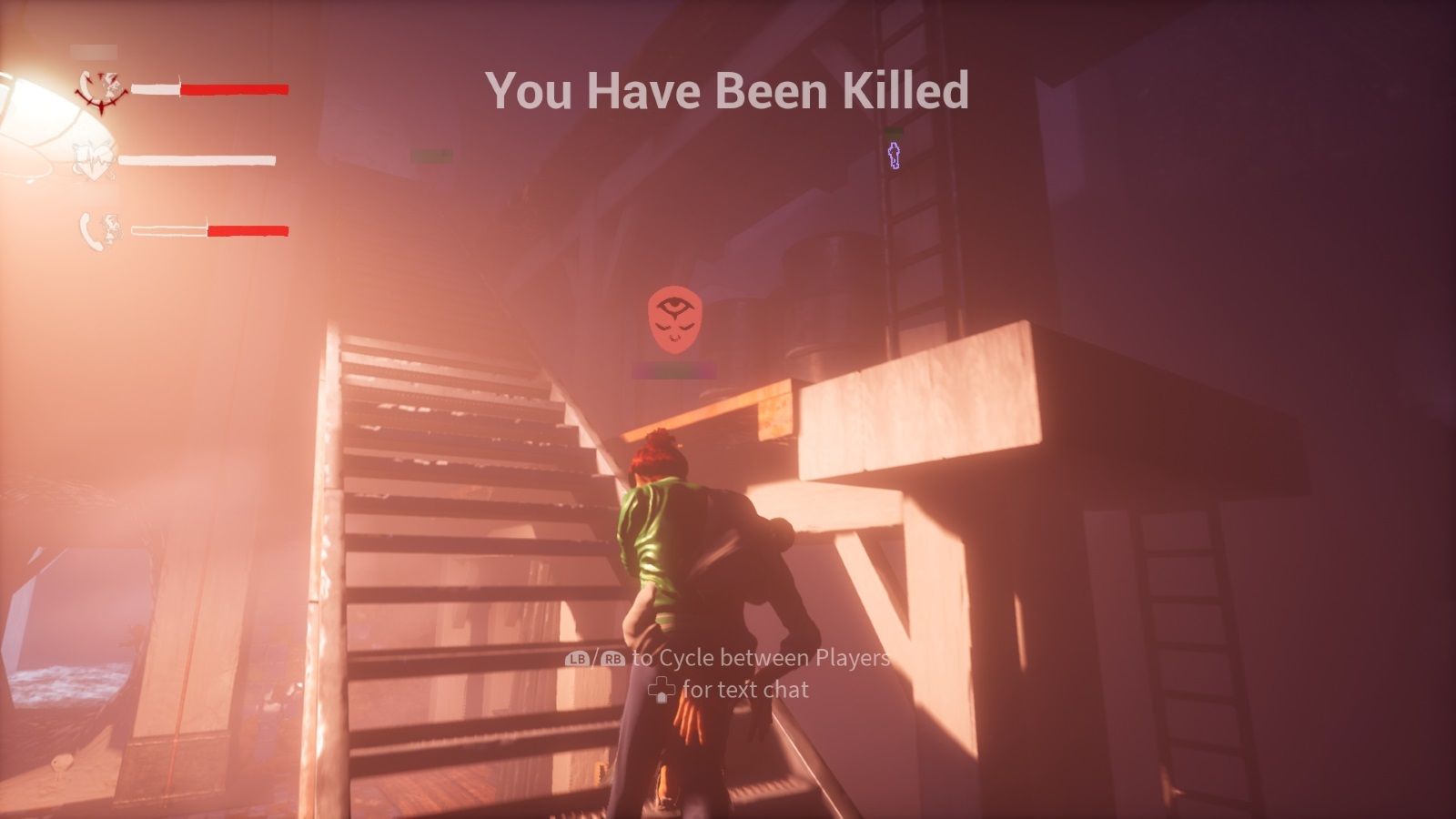 These sort of spontaneous moments of camaraderie aren’t guaranteed, of course, but the game does encourage them with its unlockable class abilities, and hero items you can swap out before a mission. You can temporarily distract sleepwalkers by prank calling them, for example, or send out drones to scout ahead, or just get... extremely beefy in order to better perform takedowns. You can start a mission with a sleep-dart launcher, or a taser, or a grappling hook, and pick up things like noisemakers along the way. Cans of spray foam can be used to cushion landings from high places, or gum up shock traps, or blind pursuing foes.

All in all, it’s a varied set of tools, and it works just as well for co-ordinated team plays as ad-lib chaotic getaways. I’d like to see just a few more gadgets introduced, to truly make the game into the immersive sim it nearly is. Still, whether it's the choco bars you scarf for quick stamina boosts, or the firecrackers you throw for a noisy distraction, the usable items do as much to reinforce the tone and setting as they do the tactical depth of play. 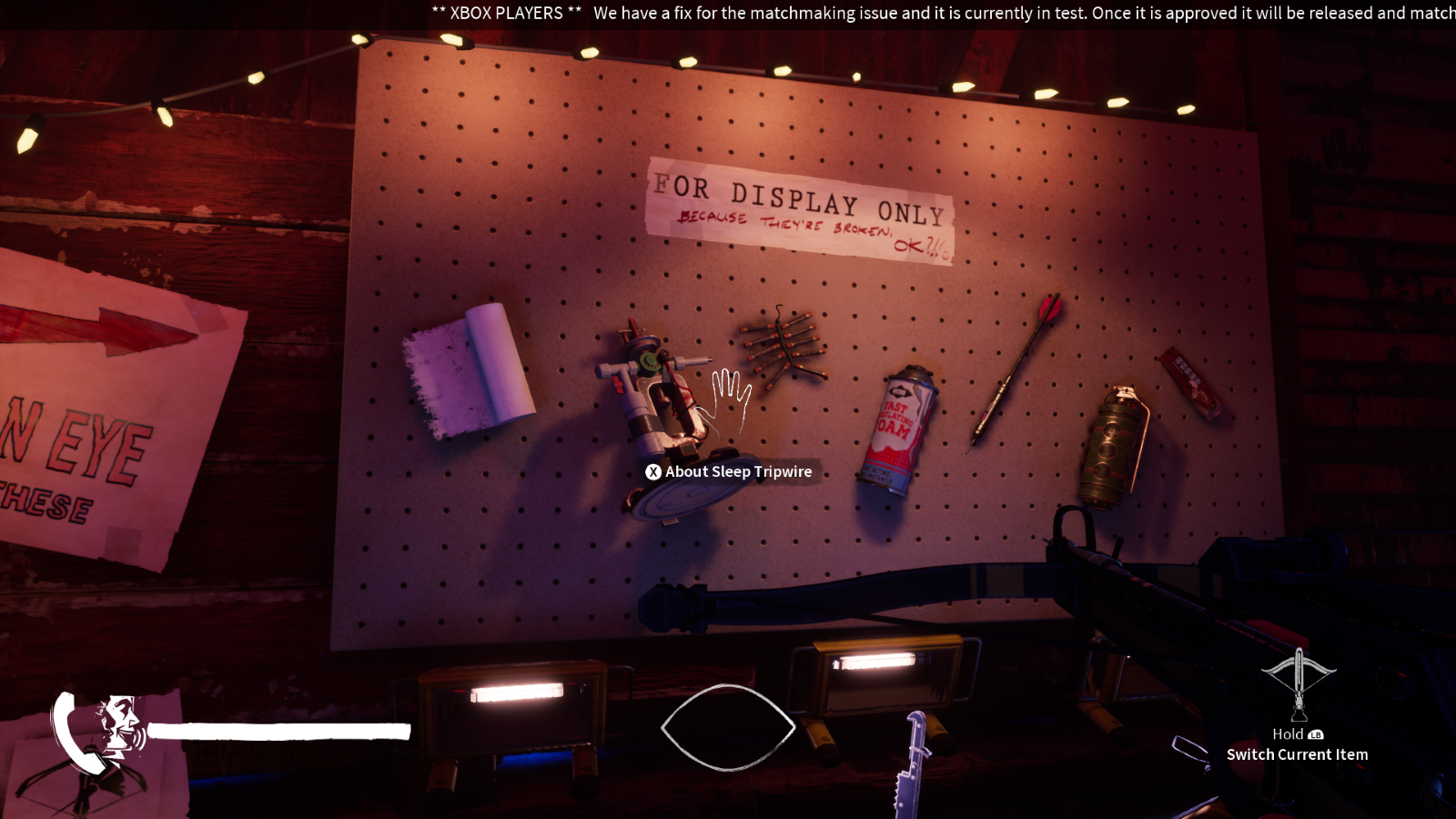 But yes, despite its unpredictable splotches of emergent chaos and its semi-random objectives, The Blackout Club does get repetitive quickly during sustained play. Even with experience to spend on ability points and ‘candy’ to spend on cosmetics, I found it very difficult to find the motivation to play for more than an hour at a time.

Conversely, however, I don’t think I played a single match that I didn’t enjoy. The game offers an immediately recognisable concept, that manages to innovate and surprise, and it’s entirely unlike anything else I’ve played before. Just like a secret clubhouse, it’s likely to lose its allure if you spend all your time there - but it’s exciting as hell to to visit in a snatched moment. 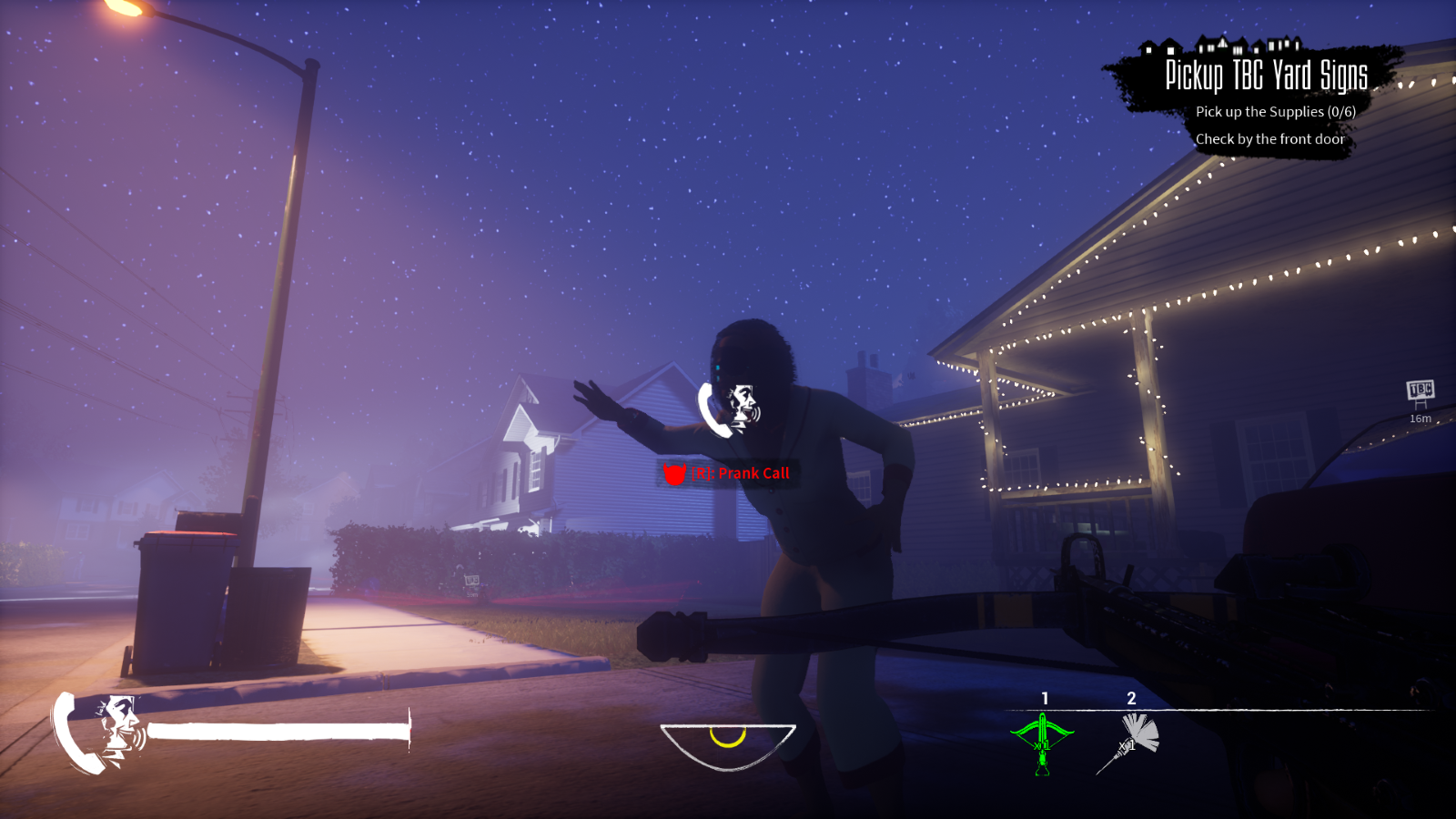