At EGX this year, I went in the Leftfield Collection and I saw a shredder. A paper shredder with a face, and a big pile of books next to it. And a big pile of shredded books underneath it, too. So I ambled over, eager to destroy some literature. It was, it turned out, The Book Ritual, currently free on Itch. The Book Ritual is by Alistair Aitcheson. I did not know this when I sat down to play it. The identity of the developer is particularly relevant to me writing this, because I went to school with Alistair Aitcheson.

I asked him if he remembered anything about me. “I do a bit, but nothing specific... It's so long ago now!” He said. “Did you play violin?”

Reader, I did not. But that’s okay.

I remember Alistair. He was, I think, two years above me, but I was part of a social group that intersected with his. Alistair had much longer hair back then. Once he came to a fancy dress party as, I’m fairly sure, Super Ali, in a Superman style shirt over a t-shirt with a big A on it. We called him Ali A (I presume because of the existence of another Alistair, but I do not remember so much as a molecule of same). “I was really happy when you called me Ali A,” he said. “Nobody’s called me that in forever.” To be fair, it’s not a great name if you want to stand out in video games.

It turns out that Ali spent the last decade beavering away making video games. Since launching a few iOS games, he’s “been working on progressively stranger games”, and more recently experimenting with what he calls “alternative-controller games”. Which explains the shredder.

The Book Ritual has a framing narrative of sorts. You choose a physical book that you want to play it with. This book turns out to believe it’s actually a human that’s been transformed into, in my case, Katie Price’s 2014 barnstormer Make My Wish Come True. Your task is to help the book remember what it’s like to be human by doing increasingly creative things to it. Drawing in it, describing things you’ve lost, cutting up paragraphs and sticking them back together in a different order, crossing out all the words on a page except the ones that you like… even giving your book a face. But through every stage, you also have to tear pages out and shred them, sometimes three or four times, before you can progress to the next part.

Ali told me that he’d been thinking about the difference between a virtual thing, like a game, and physical things. Physical things can all be destroyed in a different way to how you destroy lines of code. “One of the nice things about books is that you can destroy them gradually -- they're made of lots of pages, so tearing them out can become a repeated action,” he explained. “Having a single object that you damage again and again made it feel like a totem that would ground the whole experience. You always come back to the book. The book is with you through the whole journey, and you see it change.” 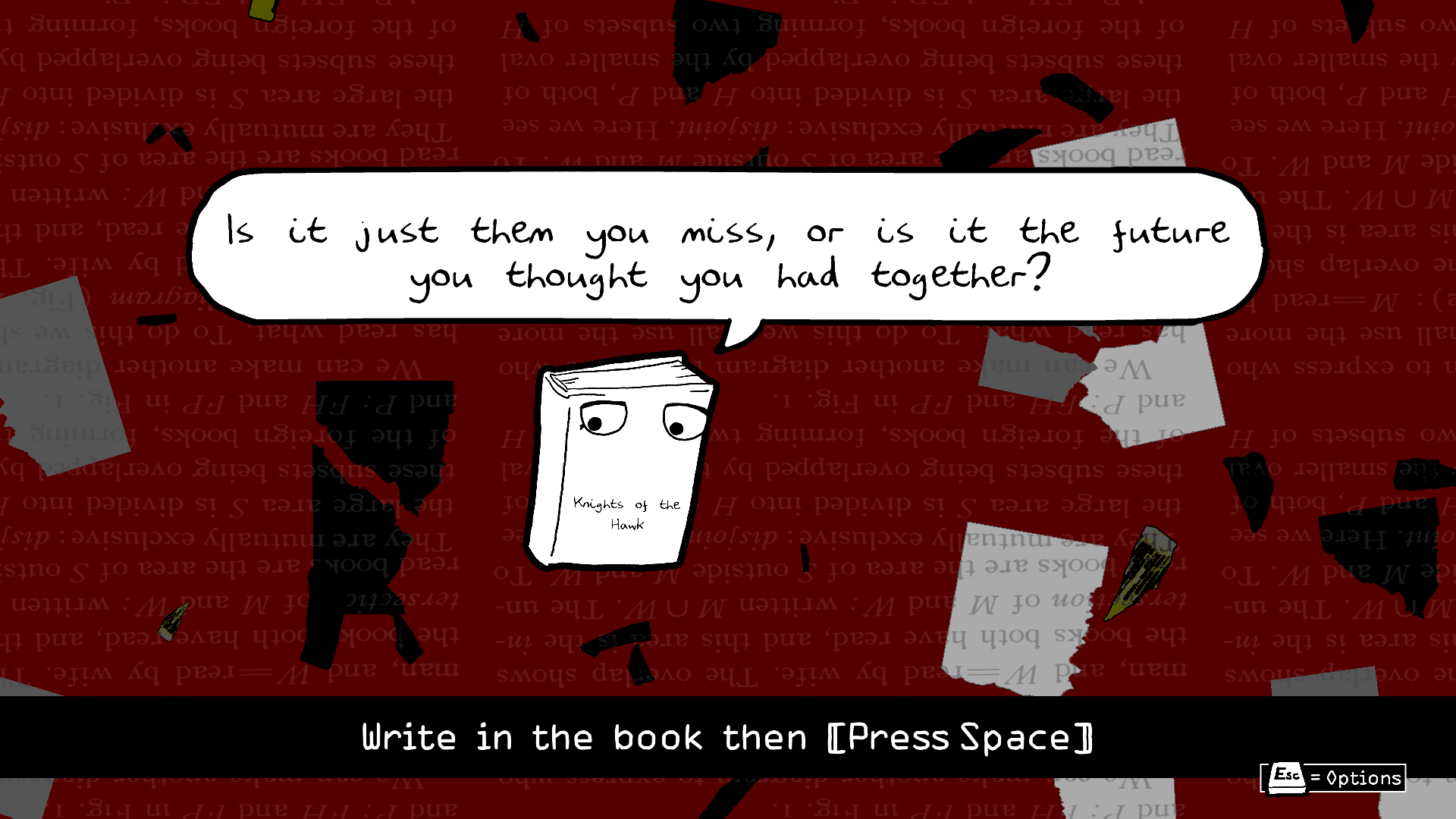 Being asked to repeatedly destroy bits of a book was a strange thing. At first I really didn’t want to. Ripping out pages of a book felt wrong. It felt transgressive and savage. Even Katie Price’s Make My Wish Come True, which I’m sure is very good, but equally sure isn’t winning a Nobel Prize any time soon. Ali said that he thinks it’s because books are filled with magic and imagination; writing comes from the soul so when we tear up a page of a book we feel like we’re tearing up part of that soul. But that’s what made the concept interesting to him.

“It's just an object. There are thousands of duplicates of the words you tear up all over the world. And what's the difference between words that you destroy and words that you will never read?” That’s probably one to ask our Matt.

The point, of course, is to question your attachment to physical objects. "I didn't make it because I think books are bad and must be destroyed. I made it because books are important," Ali explained. "Why do we feel emotionally connected to diaries and souvenirs in the same way we feel connected to people?”

I asked Ali if he had any favourite or least favourite teachers at our school. He, evidently a kinder person than I, only listed favourites: Mr. Streeton opened his eyes to the bigger questions of History; Mr. Shelton went the extra mile to help him prepare for maths exams; Mme. Cooper pushed them very hard in French because she saw potential in the class, and he has a lot of respect for that.

As I played The Book Ritual, I began to really relish tearing out the pages. The physical act -- the papery resistance before the book gave one up, and the noise of the shredder, and the heap of word spaghetti growing ever higher on the show floor -- became more and more satisfying. But because it was a show floor, other people had been playing first. I picked up one of the other books and flicked through it. One of the things the game asks is for you to write down something you lost, and how you felt about it, in the pages of your book. Whoever had played that time had written a list of women’s names, and an apology.

Ali told me he makes a note not to ask people what they write. The sense of safety you get from knowing the book is private is important in the player being honest with their answers -- though he thinks a bigger factor is whether people come in hungry and open to share themselves, or if the game needs to earn their trust first. This, he says, makes them more likely to choose to play the game with a book they actually like.

“I think it's more cathartic with a book you like, as if you're throwing off the shackles of your attachment to objects,” Ali said. “When people don't care about the book they choose they often do so because they think ‘I need to throw this out anyway.’ By the end they find themselves wanting to keep it.” 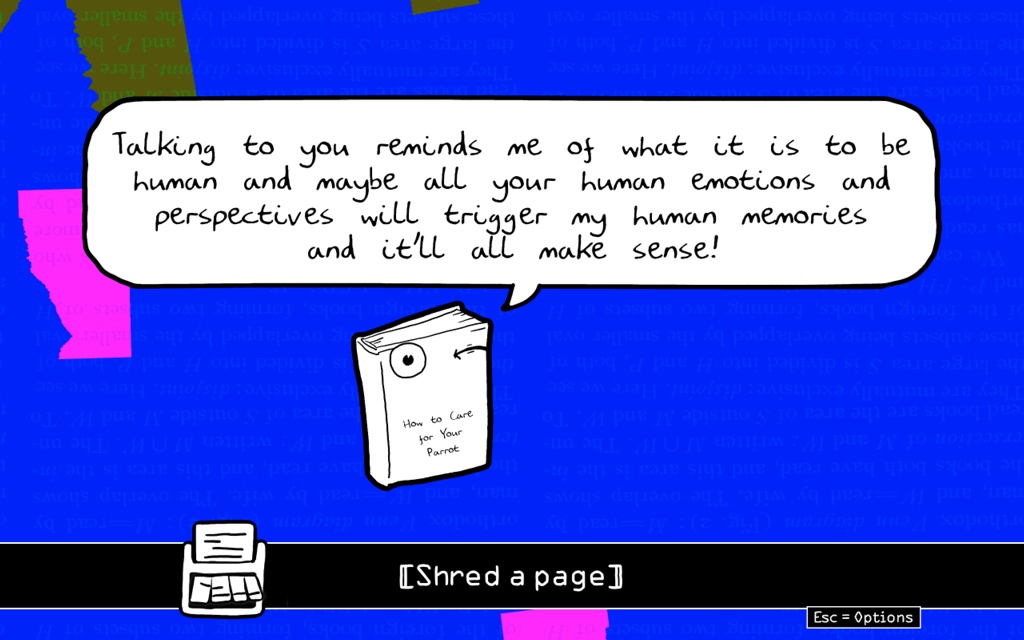 As you go through The Book Ritual, you create something that really is unique, and shaped by you as a player (though I spose it’s not recommended you play The Book Ritual with, e.g., the album insert from Once Upon A Time In Shaolin). The on-screen version of the book leads you through the process of destroying bits of it by asking you to share moments of your life. “By the end of the story every missing page, every little doodle and every bit of writing, is a memento of a different part of this heart-to-heart. The content of the printed text is gone,” said Ali, talking about the cycle of creation coming out of destruction. “When we acknowledge that loss is a part of life, recognising that growth gives us hope.”

He said something similar when I asked if he remembered his time at our school fondly. Ali said he has lots of great memories and friends who he’s still in touch with, but also remembers being a “total embarrassment”. The social group would sometimes book out a scout club hut overnight. People would make out in shared sleeping bags (mostly, I believe, for warmth, because the hut was unheated) and then be wary of each other the next day. I think Ali thought I played the violin because our friend Tim went out with a girl who played the cello; we looked kind of alike and I also sort-of-dated Tim for a summer.

We weren't cool. We were the kind of teens who drank room temperature Stella and the sort of weird bottles of booze that you’d swipe when your parents weren’t looking -- port and sherry. “To grow up is to learn from our mistakes,” said Ali, “and I think I provided myself plenty to learn from!”