Officer Dooley is the best point and click character I've met in ages, and I say that having thoroughly enjoyed the company of Thimbleweed Park's misfits and misanthropes. Dooley is on a different level though. Maybe it's that he's unvoiced and yet so smartly written that I can hear his every word, or maybe it's that he's secretly the world's laziest anarchist trapped inside the uniform of a policeman.

He's the best thing about The Darkside Detective [official site], a small but perfectly formed paranormal adventure that is full of good things.

Everything about Darkside Detective is tiny. There's more detail than in the visually similar horror adventure The Last Door, but there's a similar approach to pixel art. These pixels are big and chunky, giving a zoomed-in view of the world, and obscuring some of the finer detail. The flipside to that is no hunting for hidden hotspots. The cases may be pint-sized but the clues are written large on the world. 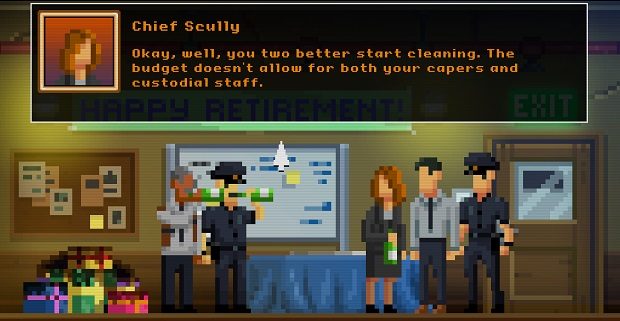 That means you'll be able to coast through Darkside Detective's six chapters, each an individual supernatural outbreak, in three hours or so. I spent longer, partly because I managed to get stuck for a while, but mostly because I was hunting for every last line of dialogue and gag. That's where Dooley comes in; he accompanies you on all but one case and you can talk to him in every scene. At first I figured he was a sort of in-built hint system but he's actually a joke-dispensing machine.

Like the puzzles, the humour in the game is gentle, poking fun at the entire concept of a paranormal police department and the tropes of point and click adventures, but so many of the jokes land that playing is like having dinner with a well-oiled double act. Dooley and player character McQueen are both underdogs, their Darkside department mocked and poorly funded, but their dishevelled dismay is always jovial. They're such a far cry from the cocky, smarmy balls of ego that often pass as adventure game protagonists – I'm looking at you, Deponia – that I wanted to give them both a big hug.

That carries through to the game's sense of humour as a whole. Whether they're investigating a haunted library or trying to catch gremlins unleashed in the police station, Dooley and McQueen are at the bottom of the pile trying to fight their way to some sort of stability. Dooley in particular doesn't care about saving the world or the city – and all but one case could be classified as localised mischief rather than an actual threat – he just wants a quiet life, and if he has to seal portals to the Darkside to get off work early, he's happy to chip in with some advice once in a while. 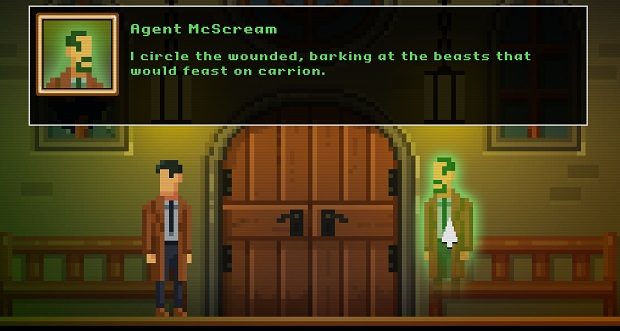 McQueen does all the real work though. Because the cases are self-contained, covering just a few screens and characters, there's very little backtracking, and every item you need is close at hand. And despite the otherworldly nature of the obstacles, most of the puzzles are logical. The only time I got stumped for more than a minute involved a single clickable hotspot I'd missed, and while I'd argue it was a little harder to spot than most, I didn't come close to the kind of frustration that comes from having twenty items, twice that number of locations, and no real idea what to do or where to do it.

I want to go back to that word 'gentle'. This is a game that makes jokes about itself. You know the sort: “Why is the moon always full in Twin Lakes?” “Because it's cheaper to reuse assets!”. That would normally make me cringe or roll my eyes, as would some of the jokes about the daft point and click conventions, but they worked for me here. It's all a matter of tone. The whole game has a lightness of touch, particularly in the writing, that means it doesn't seem like a desperate jester trying to entertain a mad king by taking a swipe at everything within reach, including itself. Darkside Detective is a chuckle, a funny conversation that takes the occasional surreal turn, but it's mostly good-natured self-deprecation threaded through with wordplay and comic misunderstandings. 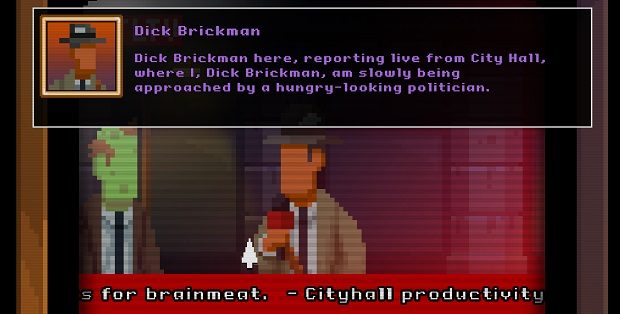 There's some actual narrative heft as well. It's not the focus but the six weird tales do lead into one another, with recurring characters and ideas. The Darkside itself is a sort of parallel reality in which vice is virtue and pain is pleasure, and everything is basically topsy-turvy. Crucially, even that doesn't seem entirely malevolent. It's just different, as are the people who live there. And some of them are helpful and some of them are villains. The game is more concerned about the tiny trials and tribulations of McQueen's job than any notion of good and evil.

As you can probably tell, I've found it absolutely charming. Humour can punch up and it can punch down, but The Darkside Detective seems more inclined to pick its targets up, dust them off and pat them on the back before sending them on their way. There are teeth behind the smile, but very rarely, and they don't seem inclined to bite.

If you like your adventure games to be challenging, Darkside Detective isn't going to satisfy on that front, but if you like witty and cheerful writing, I'd be surprised if it doesn't hit the spot. It has a great soundtrack by Ben Prunty, who you may know as the composer behind FTL's music.

Fair warning among all these warm feelings - there are things like that thing in the picture below to solve, involving water pipes, rewiring and other annoyances. They never felt like anything other than padding. They're simple enough even for a famous puzzle-idiot like me but I'd rather have skipped them entirely and there's no option for that.

You can play through the first case – which is the shortest and least inventive but gives a good idea of the tone – in the demo. Think of it as a pilot for a micro interactive series. If you enjoy it, you'll most likely love the rest. It may be slight, but it's delightful.

The Darkside Detective is out now for Windows, Mac and Linux, and costs £7.69 at the time of writing.