If you click on a link and make a purchase we may receive a small commission. Read our editorial policy.
A Panel Shaped Screen is a monthly column where Giada Zavarise explores how comics and videogames inspire each other. This time, Giada played videogames inspired by the horror comics of Junji Ito.

I first encountered Junji Ito's comics when I was a teen lurking on imageboards. "Storytime!" someone would announce, and we would all gather around the digital campfire to read some badly translated manga scans. Comics lasting only a handful of pages, quick to read and quick to share in those times when the internet was slower and darker.

Perhaps you read some of them too. Remember the one about the mountain filled with human-shaped holes? The giant human heads who float in the sky like balloons? The man whose dreams got longer and longer, a single night lasting a whole century in his mind? Spooky tales that felt like urban legends.

There are many things that scare me. Spiders. Dentists. Teenagers. Needles. My accountant. Brexit. They're the first-world fears of a person who has never been in a life-or-death situation. But Junji Ito gets how unnerving the mundane can be, if given just a little twist. He nails the perfect balance between Lovecraftian horrors and common anxieties — the fear that common accidents could hide a bigger meaning, a hidden message, the manipulations of a cruel god.

When being interviewed about his deepest fears, he cited cockroaches, war and ghosts. When he got asked about the inspiration behind Gyo, his comic about an invasion of fish with legs, this was his answer: “Sharks are scary. If they came onto land, they would be very scary.”

Over the years, Junji Ito established his reputation outside of Japan, the illegal scans replaced by luxurious hardcover books you can now find in shops. He's a more mainstream author now, and his works got adapted to cartoons and even live action movies.

But not to videogames. Junji Ito isn't into them. 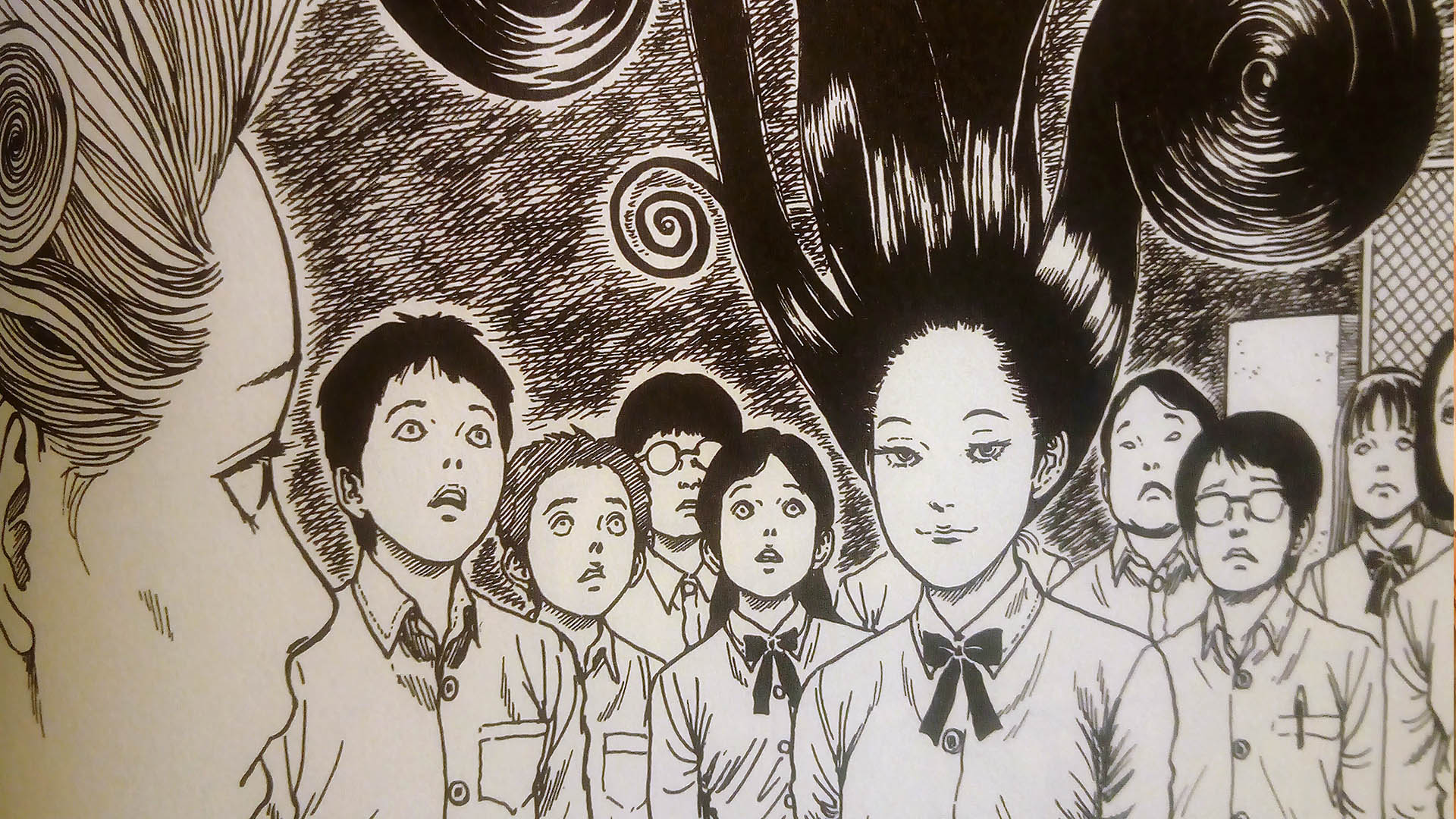 "I don’t know anything about games," Junji Ito declared when being interviewed at the Toronto Comics Art Festival. "I am afraid if I get into them I’ll miss deadlines".

Despite this, he almost worked on a game, once, when Hideo Kojima and Guillermo Del Toro dragged him to a karaoke and told him about their cool new project called Silent Hills. You know, the one that got cancelled, leaving behind only the spectre of Playable Teaser. Ito make a cameo appearance in - what else - Death Stranding, am homage to a collaboration that was never able to fully materialise.

The trouble with adapting Ito's comics to our particular medium, I feel, is that all the characteristics that make them so compelling would make for poor videogames. Ito's stories rarely have happy endings, for one thing. The monsters can't be beaten, and defeating them isn't even the point: what often destroys the protagonists are the spiralling obsessions, the anxiety, the bad decisions. It's a rare game that can pull off anything approaching this, without leaving the player feeling short changed out of their heroism.

Developed by Pawel Kozminski and published by Ysbryd Games, World Of Horror is a self described "love letter" to Ito's works. It doesn't have a planned release date yet, but you can whishlist it on Steam and play a short demo on Itch. The setting is similar to many of Ito's stories: a quiet rural town unsettled by a string of dark incidents, dark forces lurking behind the scenes. But in World Of Horror, the monsters can be defeated.

Not easily, mind you. The turn-based fights are horrid affairs, to be conducted with improvised weapons and determination fuelled by despair. Each hit rakes at your mental state; each random event can leave a permanent mark. Mission after mission, your character portrait deteriorates, their skin marked with new cuts, scrapes and curses.

So, the monsters can be defeated, but only by destroying yourself in the process. You may survive, but there's little remaining of what could still be called "you". Better to not give players weapons, then. Better to not give them choices. Better to just tell them a scary story.

You may have encountered artist Trevor Henderson's work on Twitter, where he spooks his audience with photo-manipulations reminiscent of found footage videos. But Henderson also illustrated The Silence Under Your Bed, a Twine game by Kevin Snow, Priscilla Snow, and former RPS contributor Cassandra Khaw. You Remember Cassandra? The one who posted the bargain buckets full of plushies?

The Silence Under Your Bed's tagline is "Two teens tell tall tales." That's it. That's the whole game. You decide which stories you want to hear, and read them. White text on a black screen, with Trevor's creepy illustrations occasionally awaiting you behind an unsuspecting click. A game to play like a horror comic, turning pages while holding your breath, wondering what will await you on the next page.

"The Silence Under Your Bed was my first game," Trevor explains. "Kevin would come to me with some general prompts for pieces of art they would need, and I'd just be allowed to work up whatever came to mind. The images I did for specific pieces of writing were a little more nerve-wracking, but thankfully they always liked them! The mood and style of the game were sort of based around the scratchy, spooky art I was drawing at the time, so it all fit together really easily."

It's a creative process not dissimilar from the act of sharing spooky tales around a campfire. 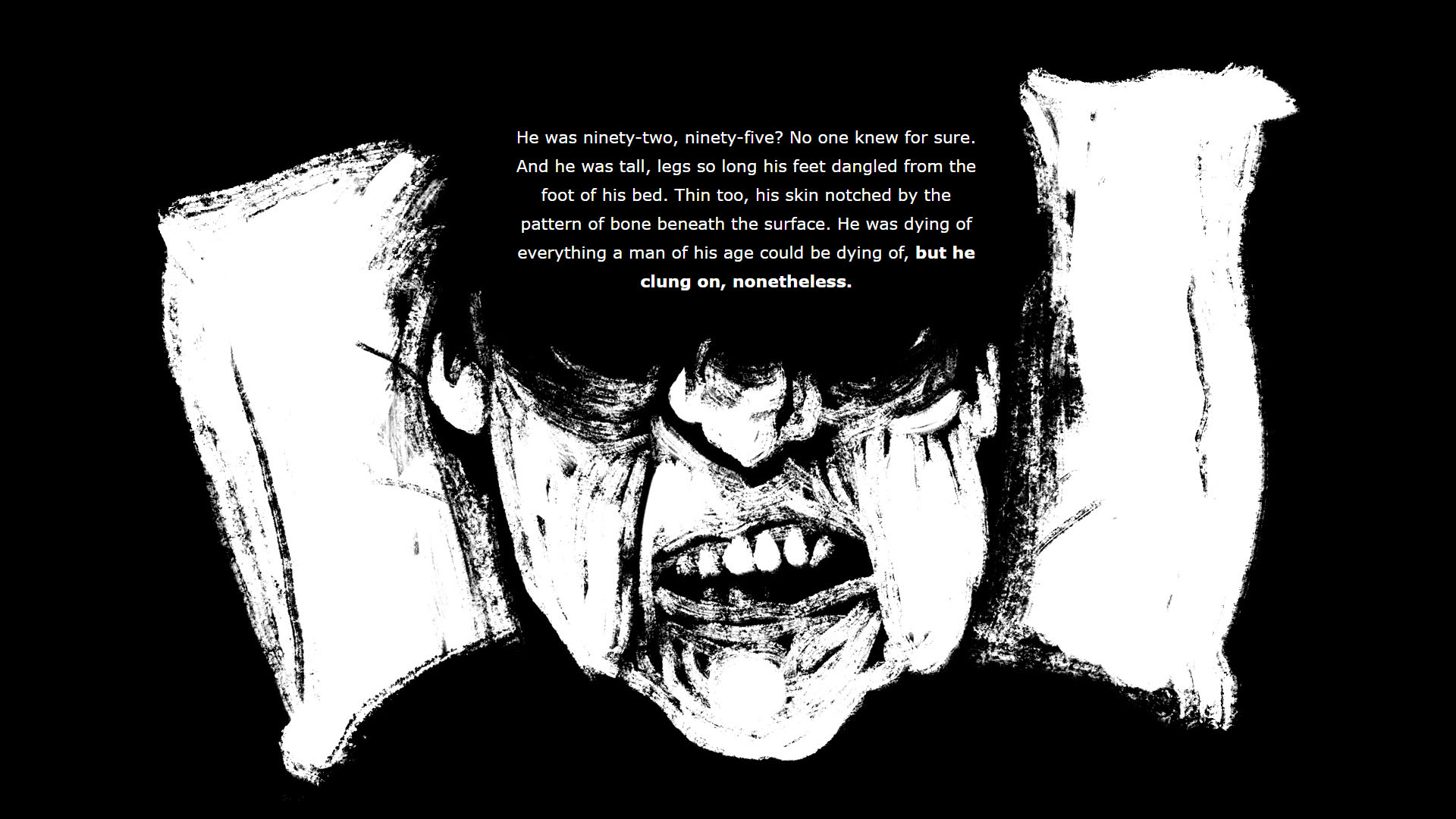 "I first encountered the work of Junji Ito when I was in ninth or tenth grade," recounts Henderson. "The first collection I read was called "Flesh-Colored Horror", a collection that included a story about headless mannequins eager to decapitate students, and a family that could take their skin off and on at will. I was enthralled."

Henderson was inspired by Junji Ito, who was influenced by others. When talking about his inspirations, Ito often cites authors like Kazuo Umezu (Cat Eyed Boy, The Drifting Classroom) and Hideshi Hino (Panorama Of Hell). Personally, the comic that most reminds me of Ito's work is Deep Dark Fears, a long-running webcomic where artist Fran Krause depicts the most nonsensical fears shared by his readers. 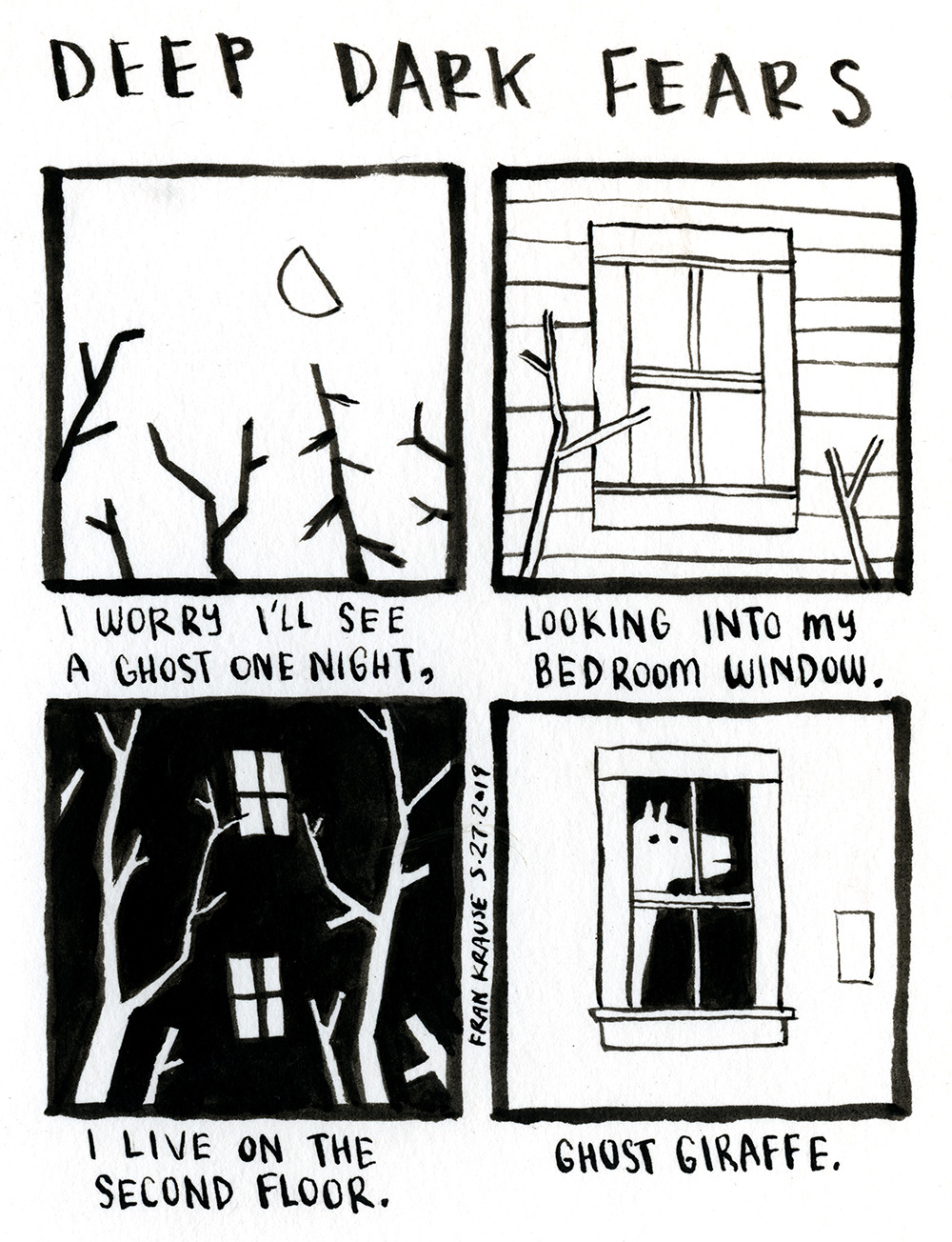 Because knowing your fears are absurd doesn't make them less real.