Back in 2015, we posted about a prototype called The Endless Cylinder, from ACE Team, in which a small long-nosed animal wanders around a surreal planet. This prototype has now reemerged as The Eternal Cylinder, and is a proper game and everything. Although it's all more polished, not a whole lot has changed from that original proof of concept (showing that it was probably a very good proof of concept in the first place). But it does now have a reassuring voiceover giving a bit of direction.

This was added because, said Carlos Bordeu, co-founder of the studio, "the game is so weird in some ways" that players do need something to grab hold of at first. I grabbed with gusto. It may have been my favourite thing I played at Gamescom, though it's still being tweaked and perfected. 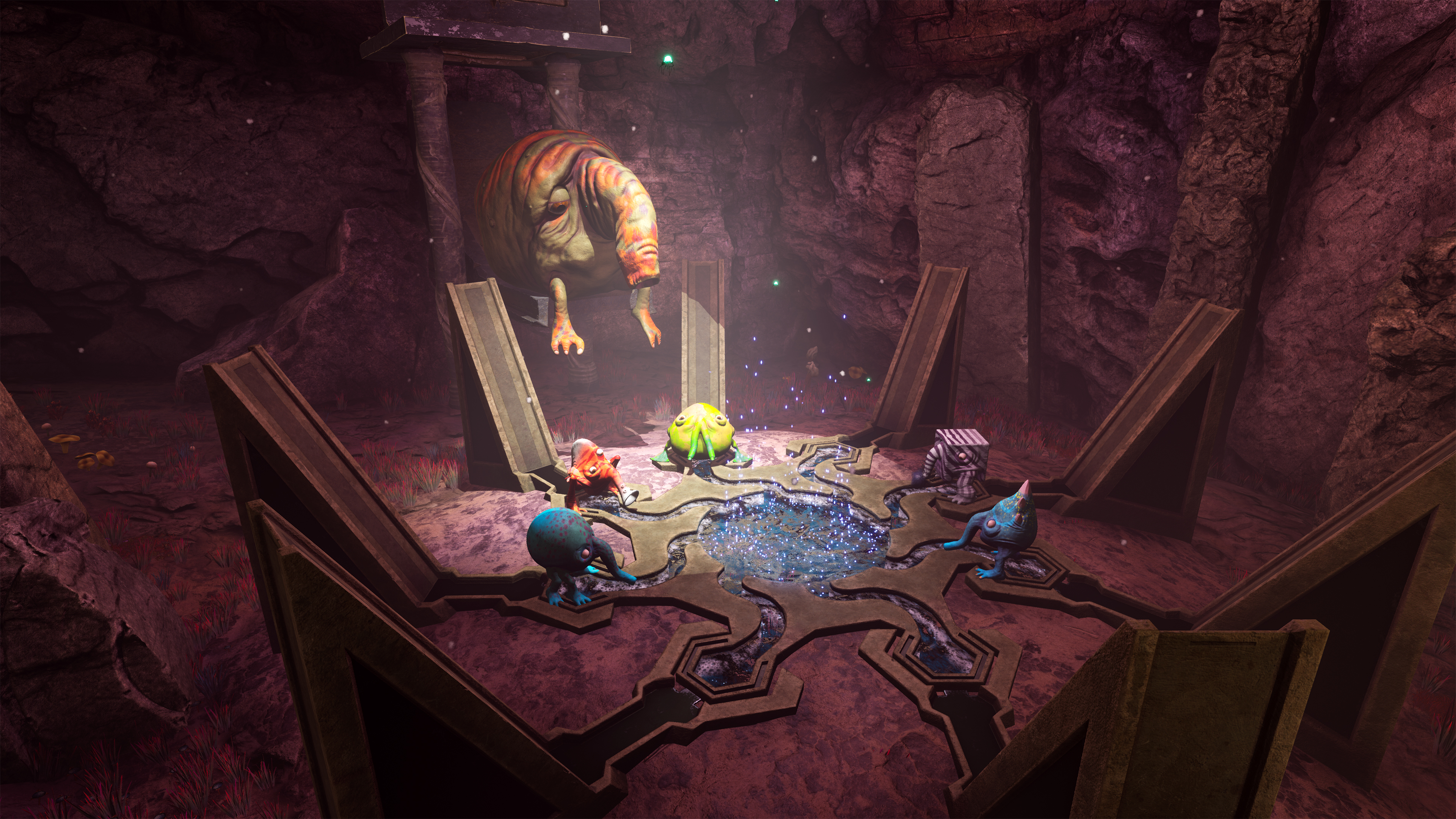 It's hard to disagree that The Eternal Cylinder is weird. I would perhaps say powerfully weird, in a way that radiates what I understand to be called big dick energy. It's a survival game but also, said Bordeu, "not really". You have to eat and drink sometimes, but it doesn't play like a Don't Starve, for example. You're not gathering resources to build a house, or machines to process them. Neither did it feel anything like Spore, which is the comparison everyone is reaching for, because The Eternal Cylinder involves genetically mutating a little floppy-trunked animal.

These elephant-frog-lizard things are called Trebhums, and you can add more and more to your group until you're running around in a big herd. "They're actually inspired by Q*bert," Bordeu told me, also expressing some surprise that people hadn't instantly spotted this. Trebhums do indeed have the short stubby legs, round bodies and nasal protuberance of that famous 80s arcade creature. But in The Eternal Cylinder you can turn your Q*bert knockoff into a literal cube shape. Or give it spines, like a porcupine. Or a trumpet nose. Or extra legs.

You can apply a mutation to a Trebhum's skin, body, legs, eyes, or trunk (one of each body part for each Trebhum) by sucking up something interesting into your vacuum nose, eating it, and seeing what happens. A puffer fish gives you a bigger body, and therefore a larger carrying capacity. Bordeu showed me a selection of some of the more than 50 mutations you can apply to a Trebhum, all of which do have a point.

To traverse cold biomes, for example, Trebhums need fur. In my hands on session, I turned a Trebhum into a processing factory that gradually converted everything in its belly into grim food slurry. It was all in service to solving puzzles or overcoming a challenge. The rough idea, Bordeu explained, is that rather than crafting what you need, you become what you need. It feels more like an exploration and experimentation game than a survival one.

You do have to survive exploring, though. The early stage and some key things are handcrafted, but much of the landscape is procedurally made. Many of the creatures roaming across it are much larger than the Trebhums, and are as aggressive as they are arresting to behold. Big car-sized bean pod things with a big row of teeth on their belly, like an inverted bear trap. Giant giraffe-esque things with big tentacle faces. Everything's mouth is wrong. Even the trees are weird, all covered in little eggs. Almost everything has a slightly… genital air to it, and I promise that's not just me being a big perv. And in amongst all these damp organic shapes, the titular Cylinder itself feels especially wrong. 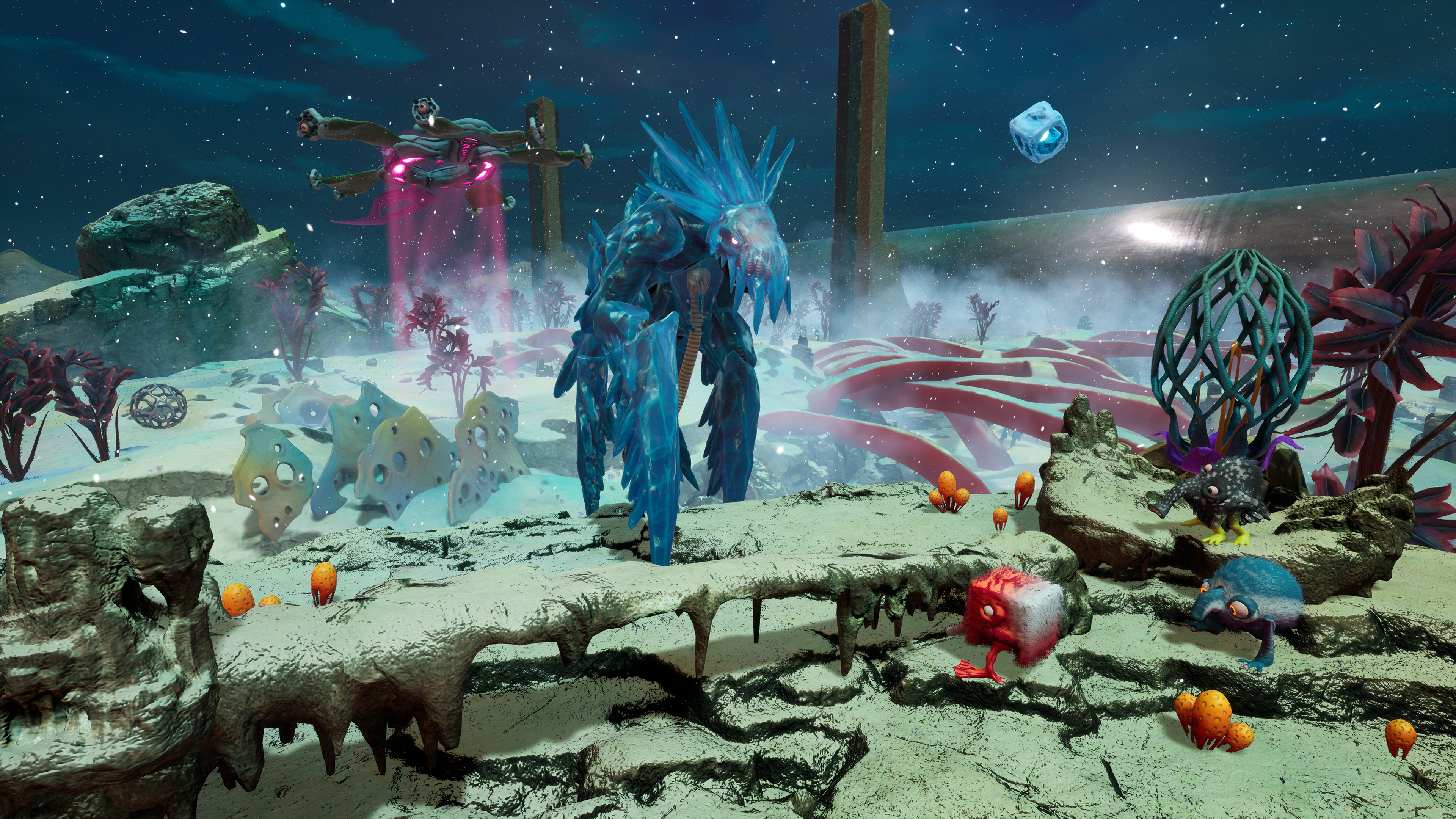 What it is, right, is a massive metal rolling pin thing. You can't see either end of it, and it's continually chuntering across the surface of the planet, crushing anything in its path. You can use special towers to pause its advance so you can explore for a bit, but that's it. It is both ominous and terrifying. There are also Servants of the Cylinder, who look like the toys that Sid the weird neighbour kid made in the original Toy Story. I got chased by a car that had the meaty arms of a lorry driver where it's back half should be, and it was very unsettling. These Servants have the ability to strip away all your darling Trebhums' mutations.

There is clearly a mystery at the heart of The Eternal Cylinder, and a slightly more complicated one than "wow, what the fuck is that thing?" There is evidence that Trebhums used to be a very advanced civilisation, and of course the origin and intent of the Cylinder and its weird Servants remains unknown. But the real glue of the game is collecting your little tribe of Trebhums and them all working together to overcome the seemingly insurmountable.

"It's about family," said Bordeu.

I watched a herd of strange creatures go past. Each looked like half a purple octopus trying to fuck a ball of lime jelly.