Check Your Six! vs Panzer Strategy. In the 'Battle of the Wargames Wot Have Hit Steam in the Past Week and Feature Hexagons and WW2 and Suchlike' there can be only one, two, or zero winners. If you're happy to adopt the role of Reader for the next five minutes, I'll don the mantle of Critic and, using screenshots and conglomerations of letters arranged in sequence and separated with punctuation marks and spaces of varying lengths, liberally dust you with my novichok-strength opinions. 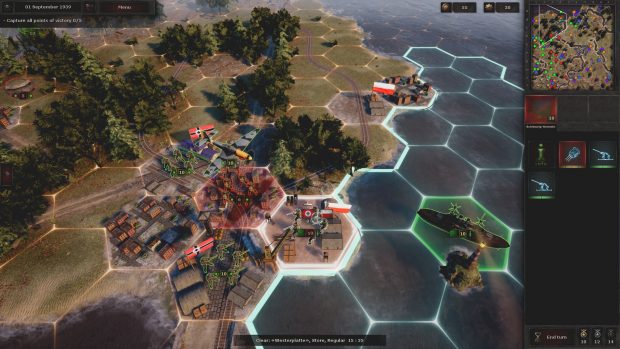 In Panzer Strategy's case, 'Early Access' is a euphemism for “precious-little content and the occasional crash”. Right now, £15.50 buys you a pretty, prone-to-freezes 3D Panzer General homage with one Spanish Civil War and one Fall Weiss scenario. Just enough substance to show that Starni know how to craft competent AI and predictable but entertaining missions, but are heartbreakingly conservative where play mechanisms are concerned. 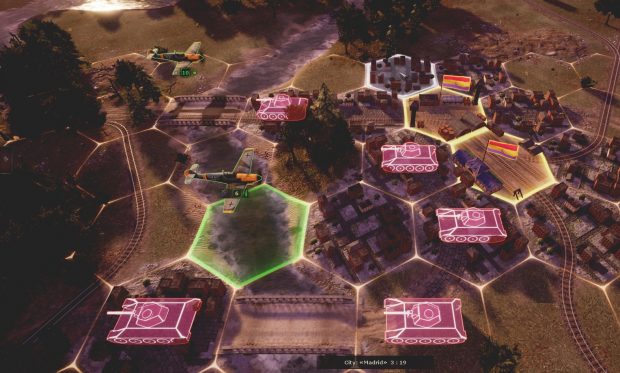 PS apes like King Kong. If you've been Panzer General-ing for the past quarter of  a century, its rules and rhythms are going to seem awfully tired. A few turns in you'll realise that the pattern of scouting, softening up and advancing that produces results in the likes of PG, OpenGeneral, Panzer Corps and Order of War - and ensures those titles are so (delete as applicable) comforting/approachable/enervating – also produces results in the line-toeing PS.

The closest thing to a surprise in PS is when a recklessly advanced AFV finds itself adjacent to a previously unspotted enemy AT gun. The closest thing to drama, when a unit reduced to a single strength point miraculously survives an attack that, nineteen times out of twenty, would eliminate it.

When all sixteen missions are in place, the impact of a purloined but potentially engaging core force customisation mechanic will be assessable. Hopefully, it will also be possible to gauge the AI's ability as an attacker and retreater. Asked to mount essentially static defences in the Spanish and Polish missions, the computer copes well enough. Mobile units like aircraft are employed energetically; artillery is generally kept at arm's length, small local counter-punches delivered when opportunities arise. If Starni can encourage artificial adversaries to show a little more respect for river hexes and guard VLs a tad more assiduously, then cheap kills and easy gains should be very rare. 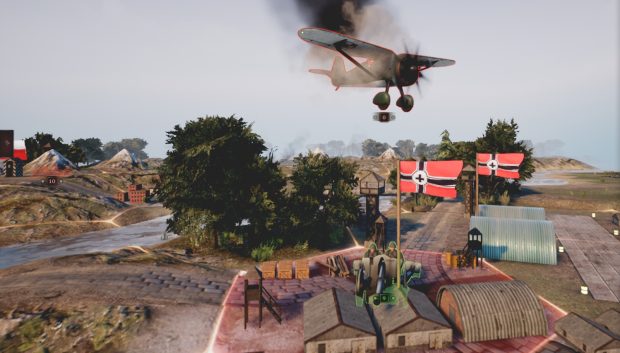 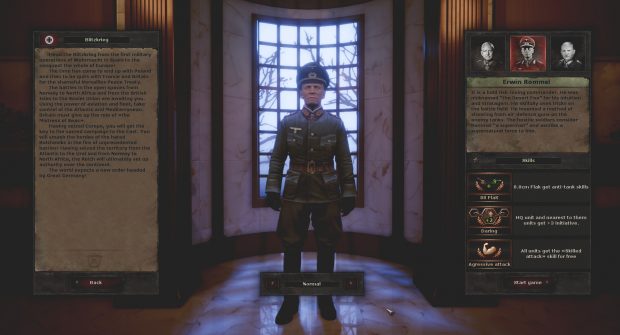 Aesthetically, the Unreal Engine-powered Panzer Strategy is streets ahead of its peers. Although I rapidly tired of the skippable over-the-shoulder camera views triggered by combat, I sorely missed the game's comely vistas, blousy explosions, and handsome menu screens when putting this week's other hexample of hexcessively hidebound hexiana through its paces.

Check Your Six! is unadventurous in a quite different way to Panzer Strategy. Lordz's unwillingness to tamper with the rules of this tabletop pursuit, ensures CY6's agreeably novel WEGO dogfights are touched here and there by inherited crudity and fussiness. Given a choice between another helping of Panzer General and a faithful PC port of a well-liked air warfare board game I'd take the latter every time, but I can't pretend I'm not disappointed by the choice of touchstone.

Just about the only thing the devs borrow from Achtung Spitfire, the twenty-year-old born-and-bred PC wargame that would, in a perfect world, have served as CY6's starting point, is a GUI flightstick and even that gets damaged in transit. 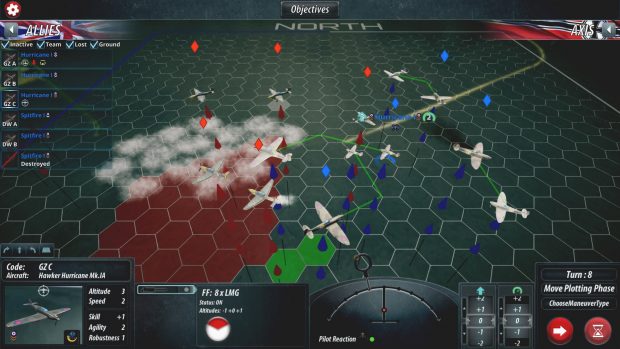 Although turns including Immelmans are plotted by manipulating the on-screen stick, altitude changes are, for no obvious reason, executed with a fiddlier, less sympathetic button beside it.

Sadly, there are no equivalents to Achtung Spitfire's semi-dynamic campaigns or configurable skirmish generator. It turns out that the “18 singleplayer scenarios with a great variety of mission goals” and “two engaging campaigns, one for the Axis and one for the Allies” mentioned in the feature list are actually one and the same thing. 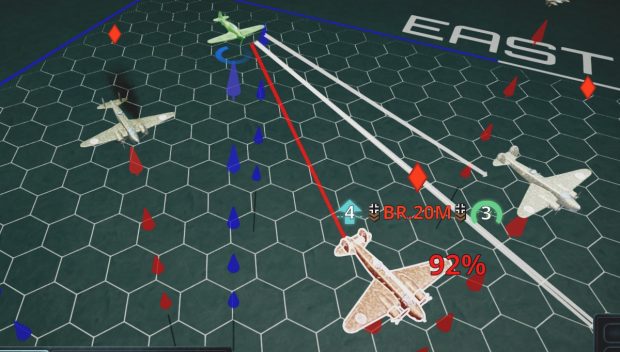 Playable from both sides the scenarios capture the feel of Battle of Britain clashes rather well. Schnellbombers are schnell, Stukas vulnerable, and Spits and Hurris often outnumbered and always too short of ammo to indulge in hopeful long-range gunnery. There are times, perhaps, when the invisible dice feel a bit too influential, and the underlying rules seem a little blunt-edged and compromise-happy (for example, it's not uncommon for an aircraft to have two different potential targets in the combat phase, with identical % to-hit chances on each) but it's easy to see why the analogue version of Check Your 6! has a devoted following. 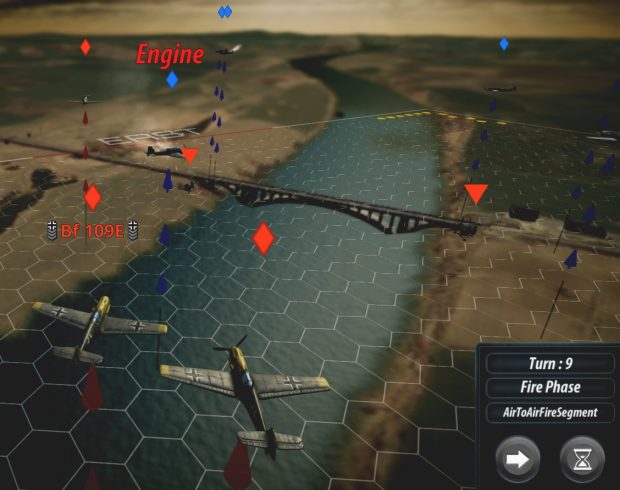 What the scatter of unconnected and easily unlocked 'campaign' scenarios fail to do is provide any sense of squadron or illustrate the fascinating attritional nature of the Battle of Britain. Destroy six Ju 88s... Protect the factory... Exit three Blenheims across the northern map edge...Victory/fail conditions are clearly defined and imperious. The sense of squadrons and pilots operating at breaking point day after day simply isn't there.

CY6 is at its most interesting when it's enlivening its dogfights with 'special damage' icons (out-of-control, crew panic, jammed rudder...) and at its crudest when 'simulating' ground attack. As far as I can tell (the manual and embedded rulebook are poor by Matrix/Slitherine standards) you simply overfly objectives with bombers to trigger the “Try surface attack?” pop-up and dice roll. Flak tends to be improbably toothless and airfields, factories, and bridges appear to have extremely basic damage models. This primitiveness, combined with surprisingly generous unit deployment zones and those nuanceless victory conditions, means some LW sorties are absurdly easy. Step 1. Position all bombers in pack as close as possible to target. Step 2. Press 'GO'. Step 3. Advance all throttles to maximum. Step 4. Keep jabbing the 'END TURN' button until the bomb buses arrive at their goal. 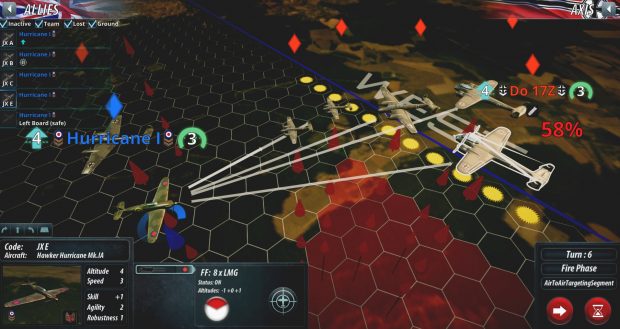 Feeble sounds, weak animations, damp squib pyrotechnics, and blurry photo-derived ground textures do CY6 no favours. Presumably the devs opted for a 3D treatment rather than a 2D one because they believed the extra dimension would make dogfights easier to read and more dramatic. I'm not convinced they've proved their case. 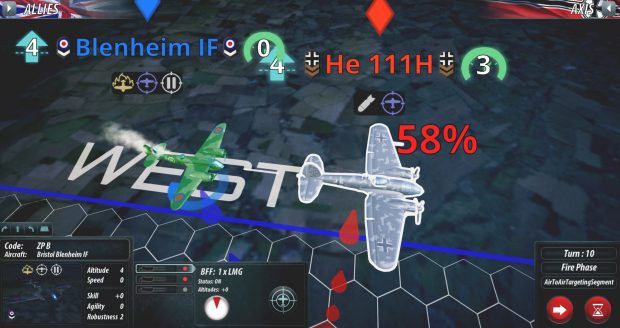 It might not have the charm, combat granularity, campaign depth, or range of aircraft necessary to eclipse the ancient Achtung Spitfire, but Check Your Six!'s easy-to-orchestrate dogfights feel plausible and are rarely boring. If Lordz get round to adding the skirmish generator they've talked about, customers uninterested in multiplayer (online or hotseat) should just about manage to hextract twenty-four GBP's worth of pleasure from their purchase before reaching for the canopy catch. 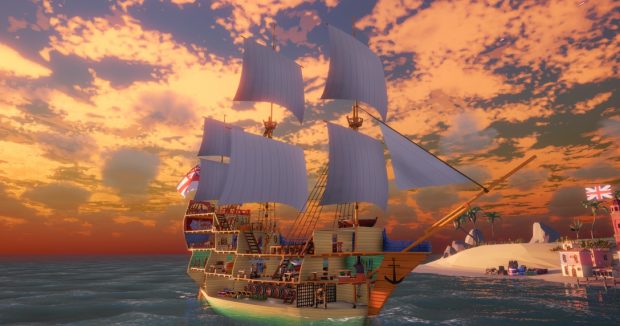 The Flare Path was rather hoping Johan Nagel's upcoming 18th Century man-o-war management game was going to have scurvy and scabs, rotten teeth and blurred tattoos. Videos like the one below suggest that, visually at least, the tone will be more Disney than dysentery.

I've grown accustomed to using the H Word (Hornblower) when writing about the next game in this sequence - Vietnam '65, Afghanistan '11, Carrier Deck - however the recent name change – HMS is now 'Her Majesty's Ship' – makes references to C.S. Forester's hero very hard to justify. The Her in question has to be Queen Anne, a monarch who died decades before either of the Royal Navy's notable Horatios were born.