If your hometown is full of Pilsner-swilling Schützen at the moment, if you can't pass a pub without hearing strains of 'Lili Marlene', or walk down a tram aisle without tripping over a Karabiner 98k butt, blame the makers of Broken Lines. Realising that the Wehrmacht was desperately in need of some time off, thoughtful Danish developer PortaPlay has left them out of the £20 “WW2” tactical RPG that has been effortlessly monopolising my monitor for the past few days. 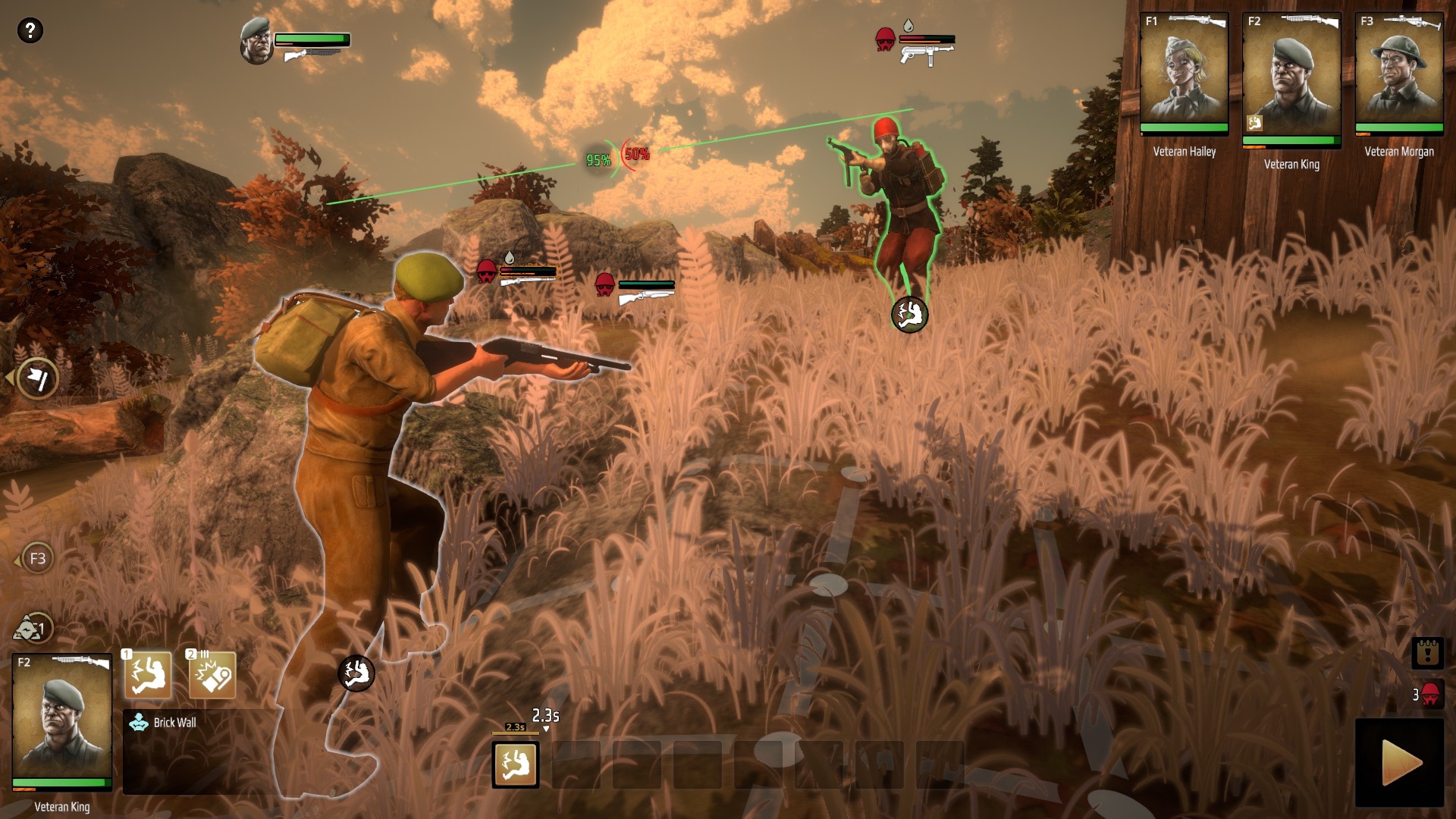 In place of the familiar Donner und Blitzkrieg brigade, the never dull Broken Lines provides an army of gasmasked weirdos of unknown origin and intent. The dash of sci-fi combined with turn-based combat choreography and team management inevitably brings to mind marvellous masonry mutilation excuse Silent Storm. Get stuck in, however, and it's soon apparent that there are as many differences as similarities. 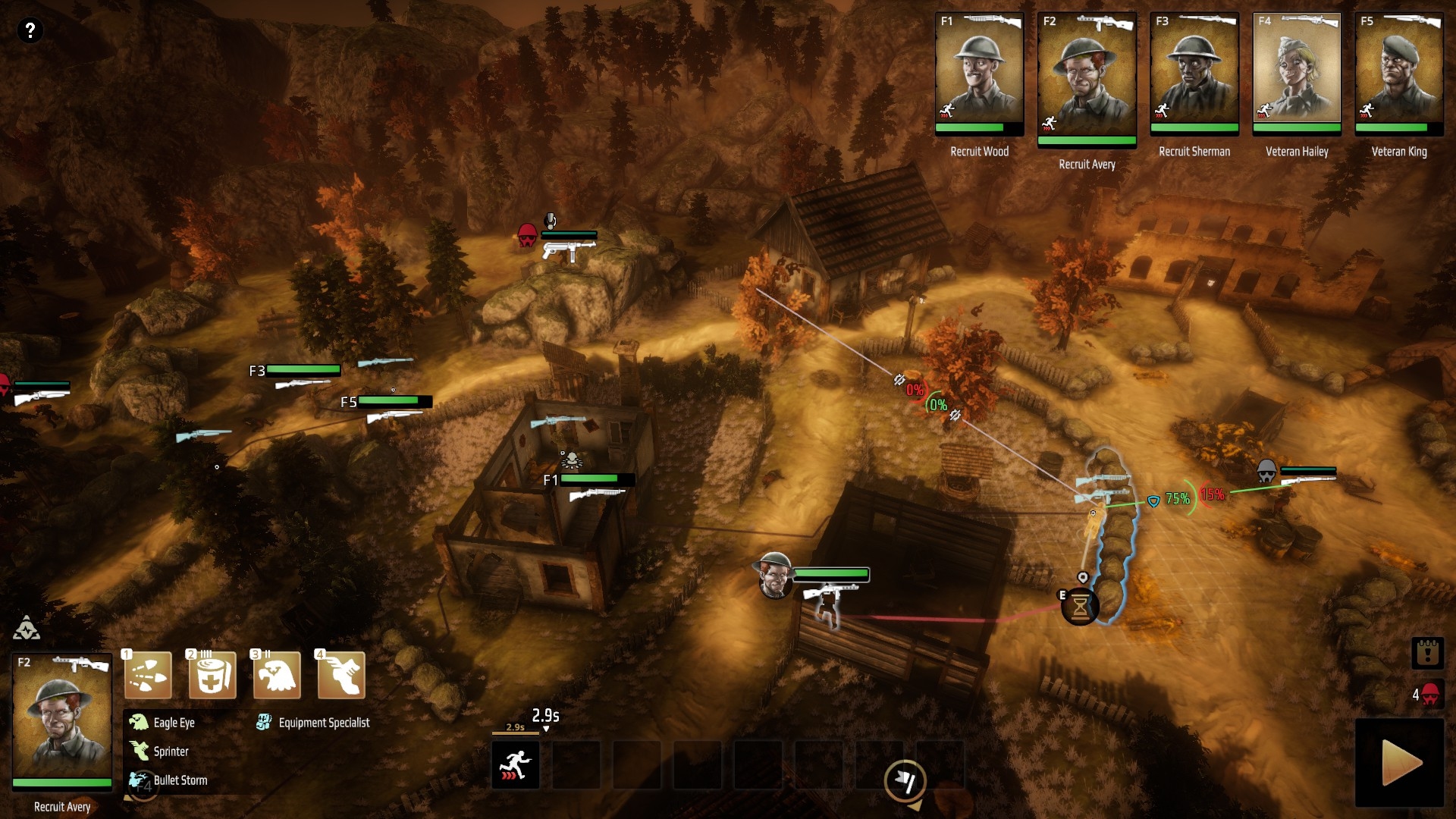 Pacier and, sadly, far more resilient to grenade and bazooka blasts, PortaPlay's offering lacks the ballistic subtlety and entertaining physics of Nival's, and some of the order sophistication of other genre notables like Frozen Synapse and Jagged Alliance. These inferiorities will probably seem far more significant at the start of the campaign than at the end, and are unlikely to be at the forefront of your mind when the lead is flying and the canny crimson-helmeted hostiles are advancing, but I found that they never completely faded from view. 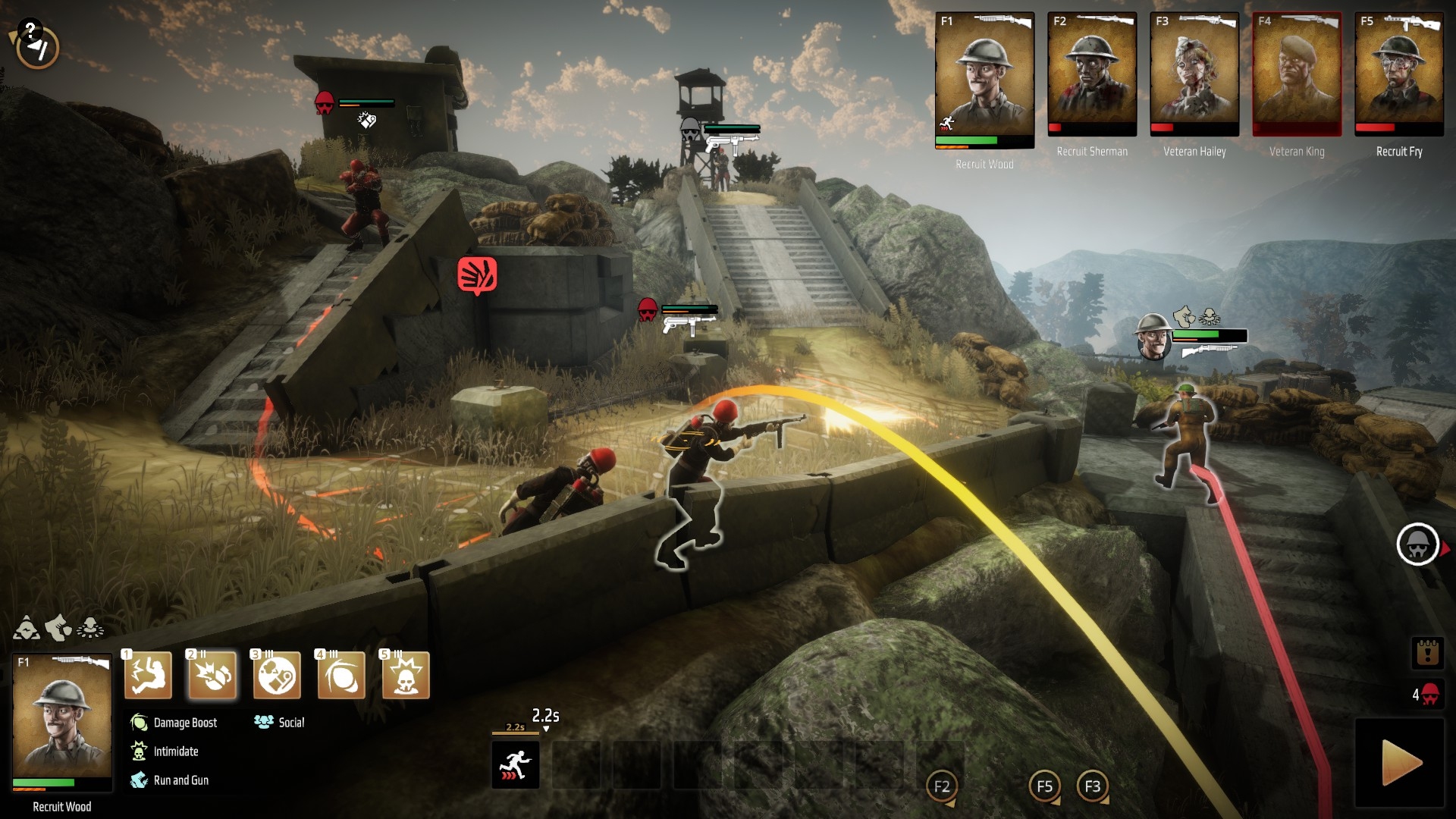 The game's furious, free-flowing firefights are delivered in intervention-free eight-second chunks. During the mandatory pauses between the action phases, you plot waypoints and issue special combat orders, while a capable computer opponent invisibly does the same. If titles like Combat Mission hadn't already proved that WeGo was the best Go, Broken Lines would make the case pretty convincingly. Instead of the sort of metronomic damage trading and polite positional one-upmanship that evokes chess better than it evokes a 20th Century gun battle, we get as much fluidity as any turnbased mechanic can hope to furnish plus the mesmerising interplay of the foreseen and unforeseen. Chaos is usually just one over-ambitious advance, mistimed flanking manoeuvre or unanticipated sentry away. 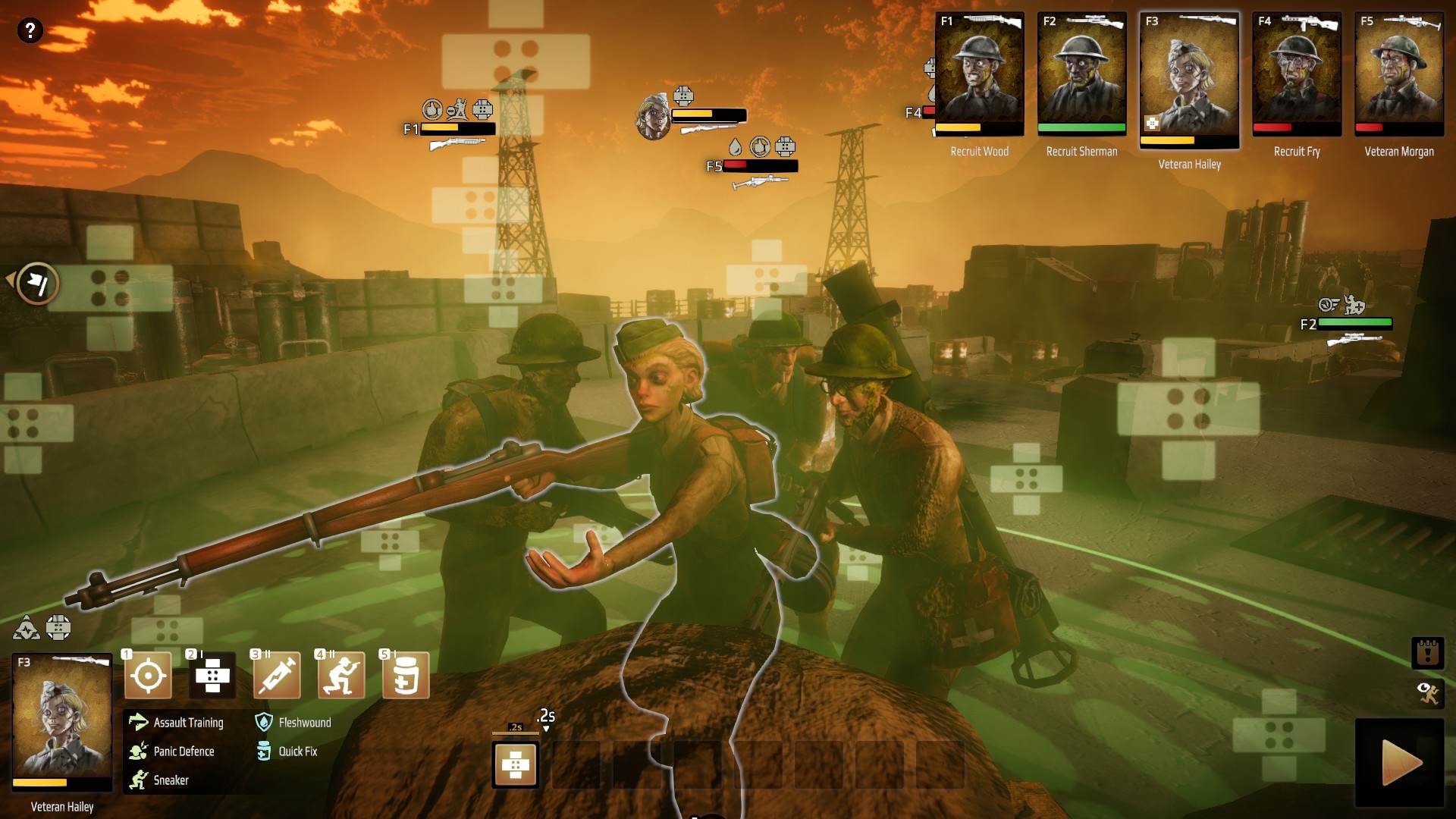 With automatic reloading, largely automatic targeting, and no corpse rifling, order interludes are refreshingly brief and mouse-kind. The three, four, or five hand-picked troublemakers that make up a mission team can move at three different speeds (the speeds influence spotting chances and aggression levels) and be persuaded to pause or employ special actions such as suppressive fire, aimed rifle shots, and first aid, at any waypoint in an order chain. What they won't do is walk in one direction while looking in another, peep round corners, or, bizarrely, sully their hands/blades with melee. If weapon ranges weren't compressed, friendly reaction times lightning-quick, and action phases aborted by encounters with new foes, the lack of fine control might lead to annoyance. 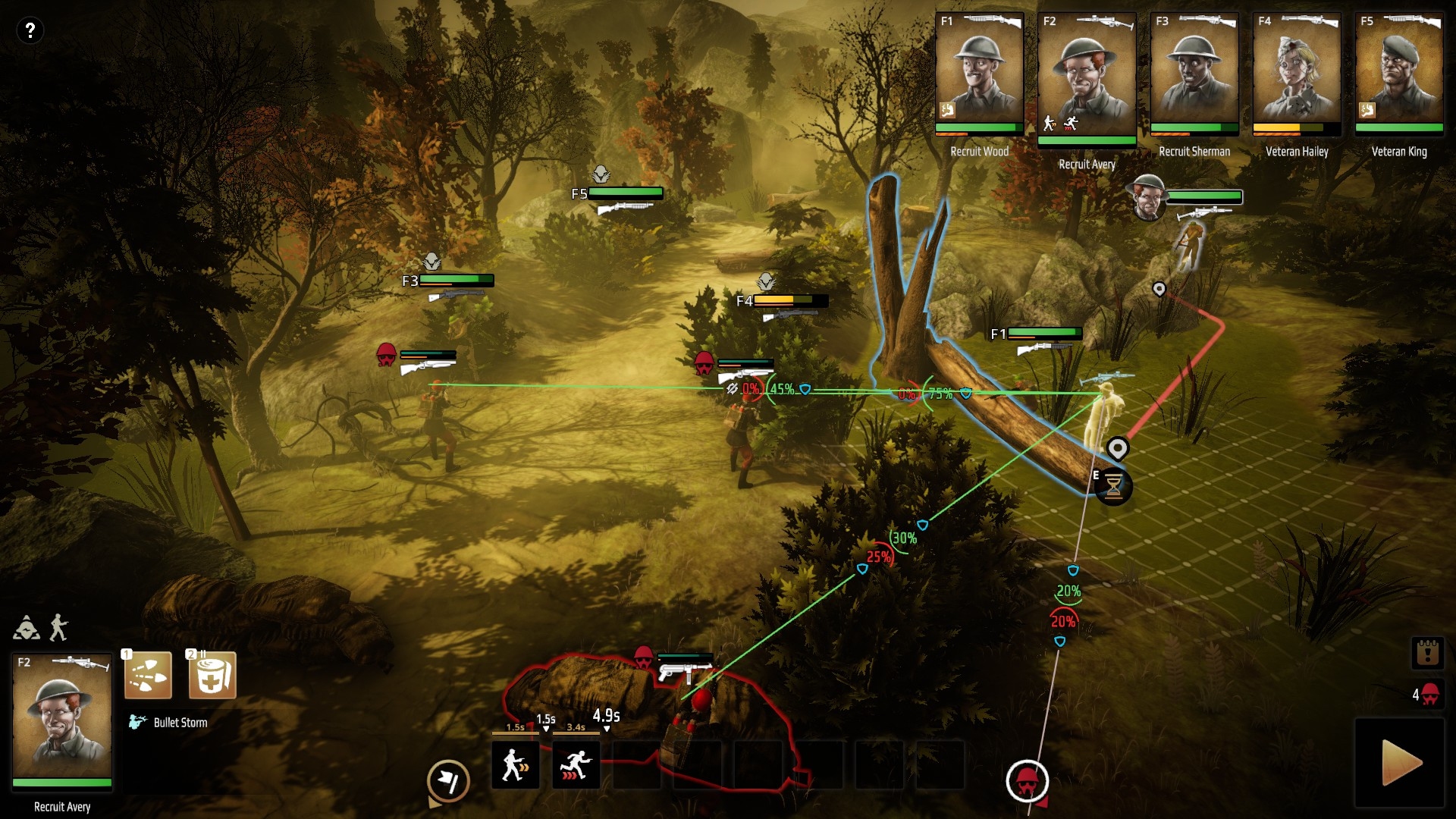 Waypointing warriors intelligently is child's play thanks to the cobweb of annotated, colour-coded lines that radiates from your cursor as you move it around searching for propitious positions. Aha! If I put Hailey behind the tree stump she'll be in cover, out of range of the goon with the MP 40* and have a 50% chance of hitting - and a 25% of being hit by - the rifleman in the ruins. I'll take those odds. And moving wounded Fry a few feet to the left should make him invisible to all enemies, assuming, of course, all enemies remain static this turn. 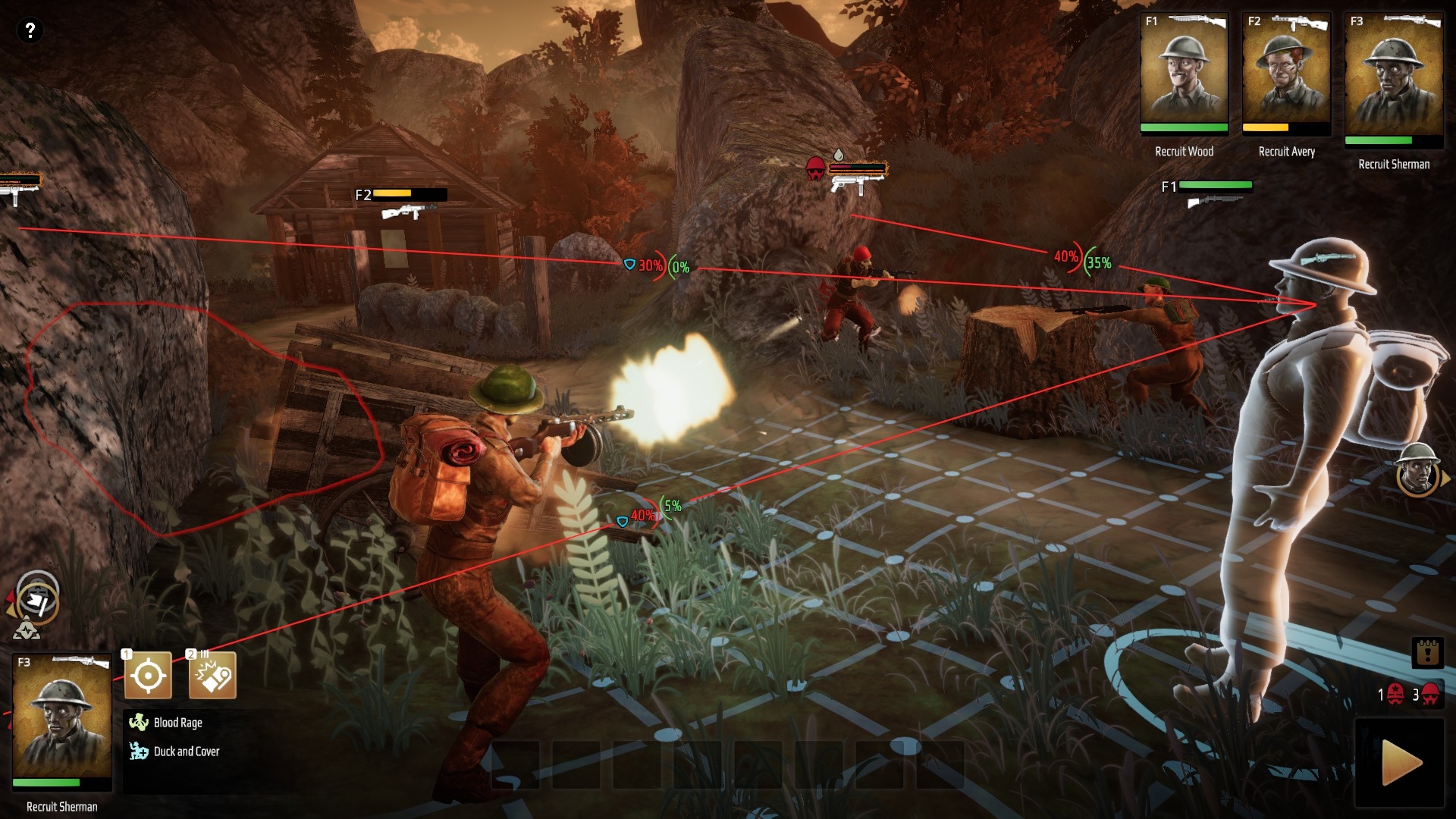 Although most levels are spacious, atmospheric, and equipped with multiple ingress routes, they often aren't as rich in cover or vantage points as they first appear. Rocks are never climbable, and cover- and concealment-affording scenic furniture doesn't include some tempting waypoint candidates like standing trees. Certain barriers can be destroyed with grenades or machine gun fire, but physics subdued almost to the point of non-existence and a sad lack of penetratable materials and persistent debris means Broken Lines hasn't Men of War's happy knack for producing entertaining emergent situations. 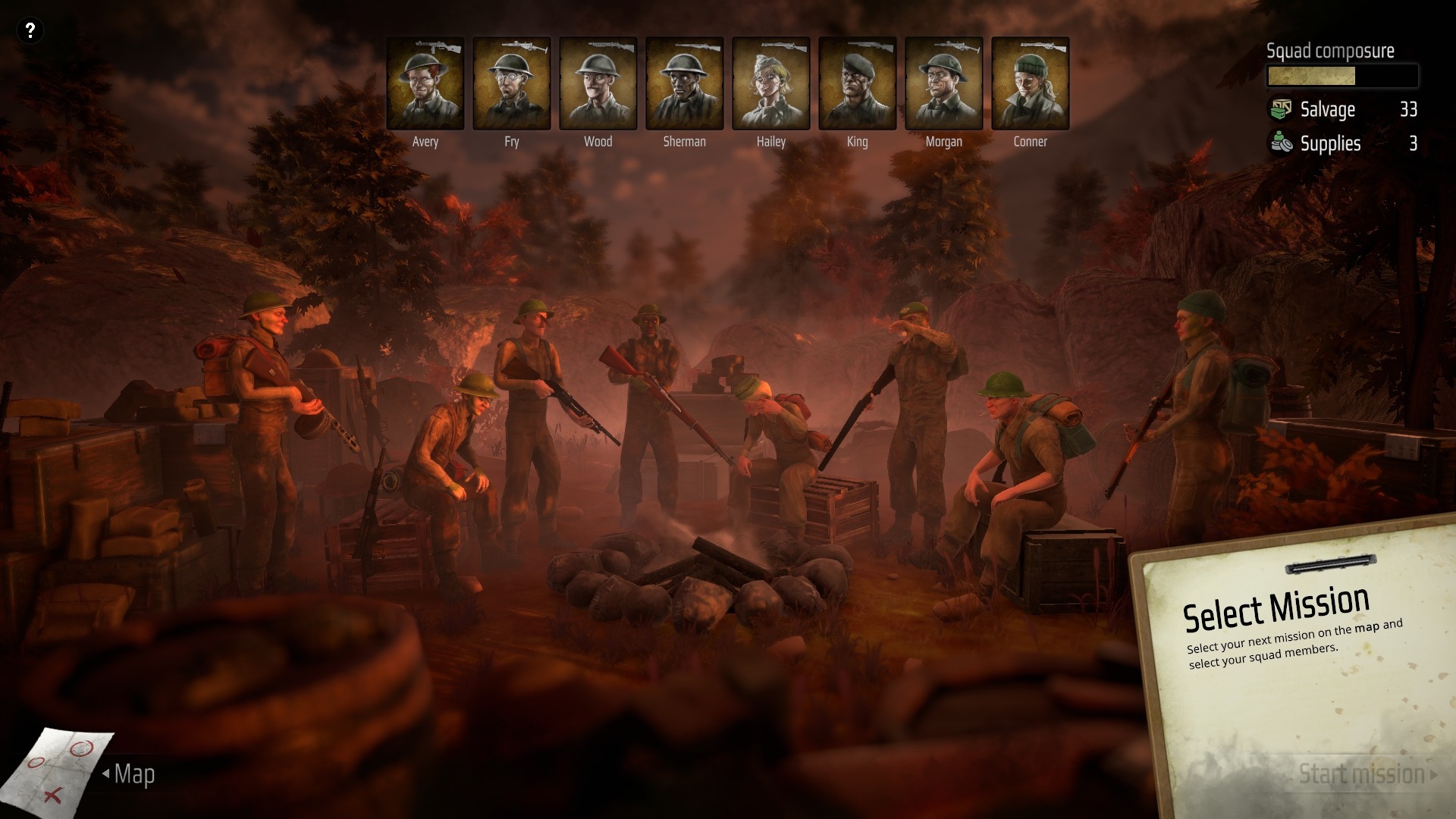 What the Danish newcomer does have that many of its peers don't, is engaging inter-mission interludes. Between story sorties you trade for supplies and new weapons, upgrade and equip characters, and, via modest helpings of text adventure, do your best to keep group members from falling out with each other, or tumbling into pits of dark despair. 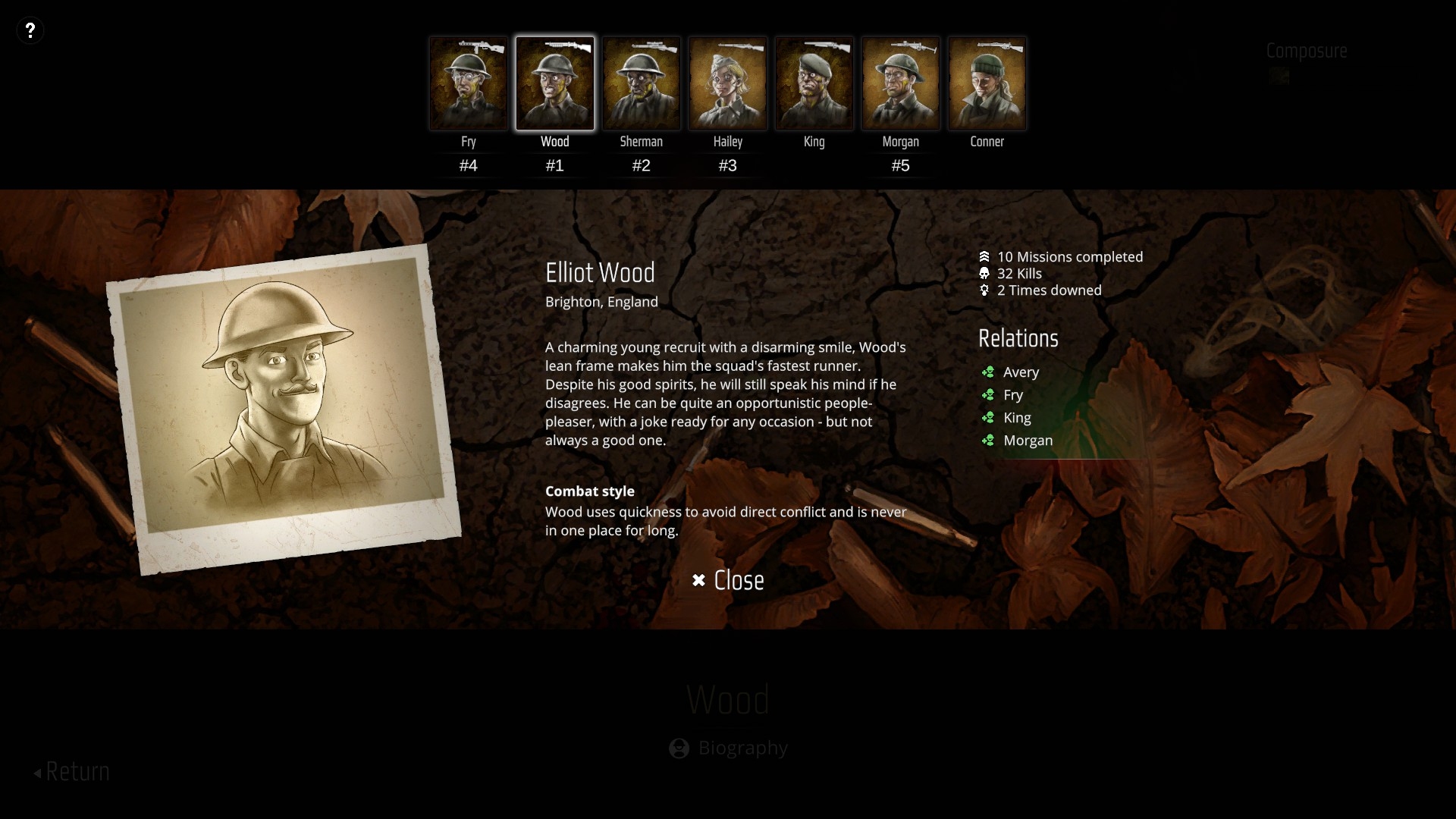 Every warrior has a Composure stat which determines how likely they are to panic in battle, and how well they resist mutinous/suicidal thoughts when things are quieter. Avery was my first Composure casualty. I failed to notice the parlous state of his mental health, and one night, while everyone was snoring around the campfire, he slipped away and, within earshot of the camp, pulled the pin from one of his Mills bombs. 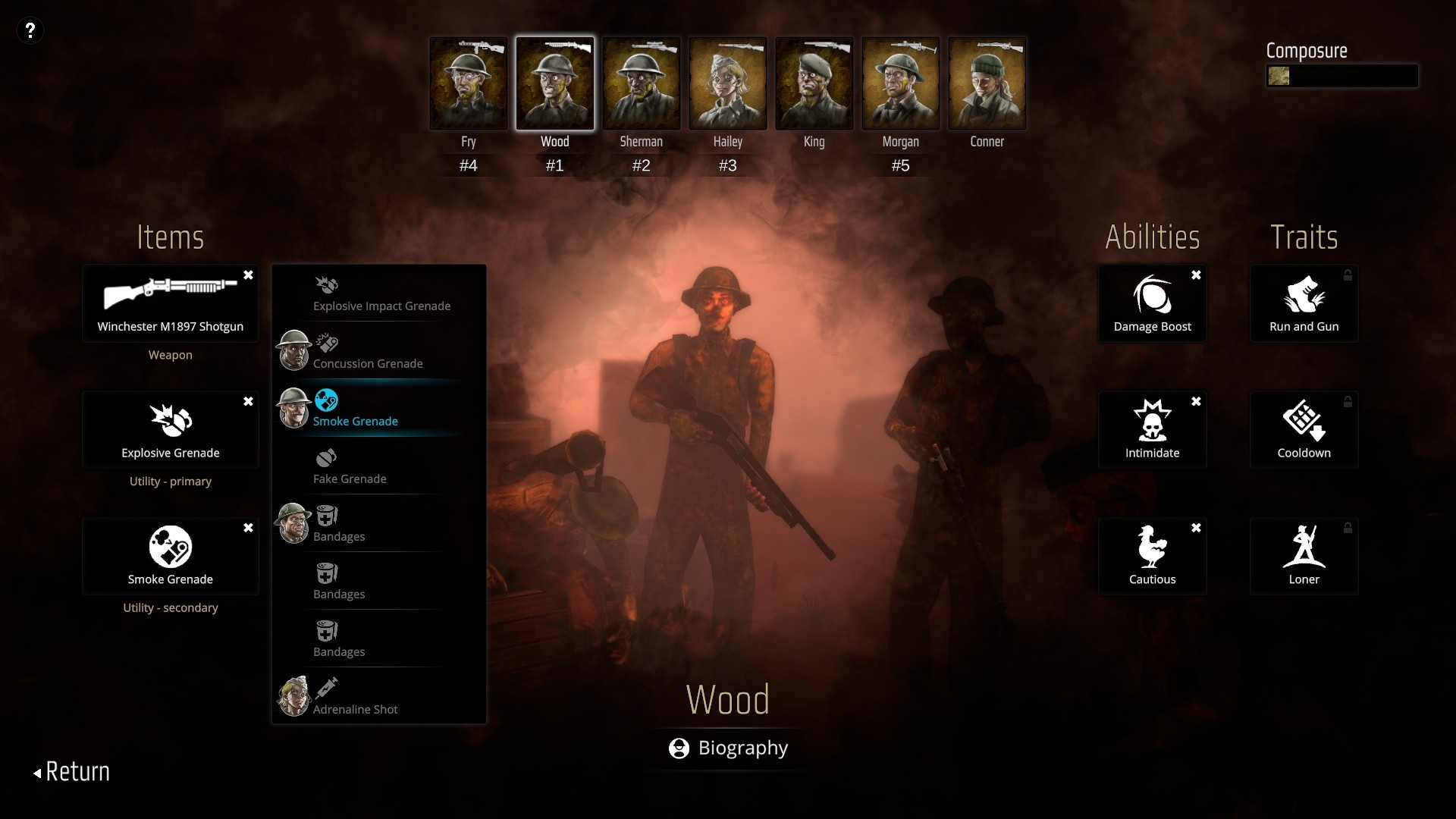 There are times when the developer's “war is hell” message is communicated clumsily or is undermined by weak characterisation, but ultimately Broken Lines is stronger and more original for its presence. As the campaign progresses, your charges gain skills and grow deadlier, but they also acquire hang-ups and become more fragile. The double-edged metamorphosis complements a story that is heavy on mystery and menace, and light on overblown set-pieces and pantomime villains. 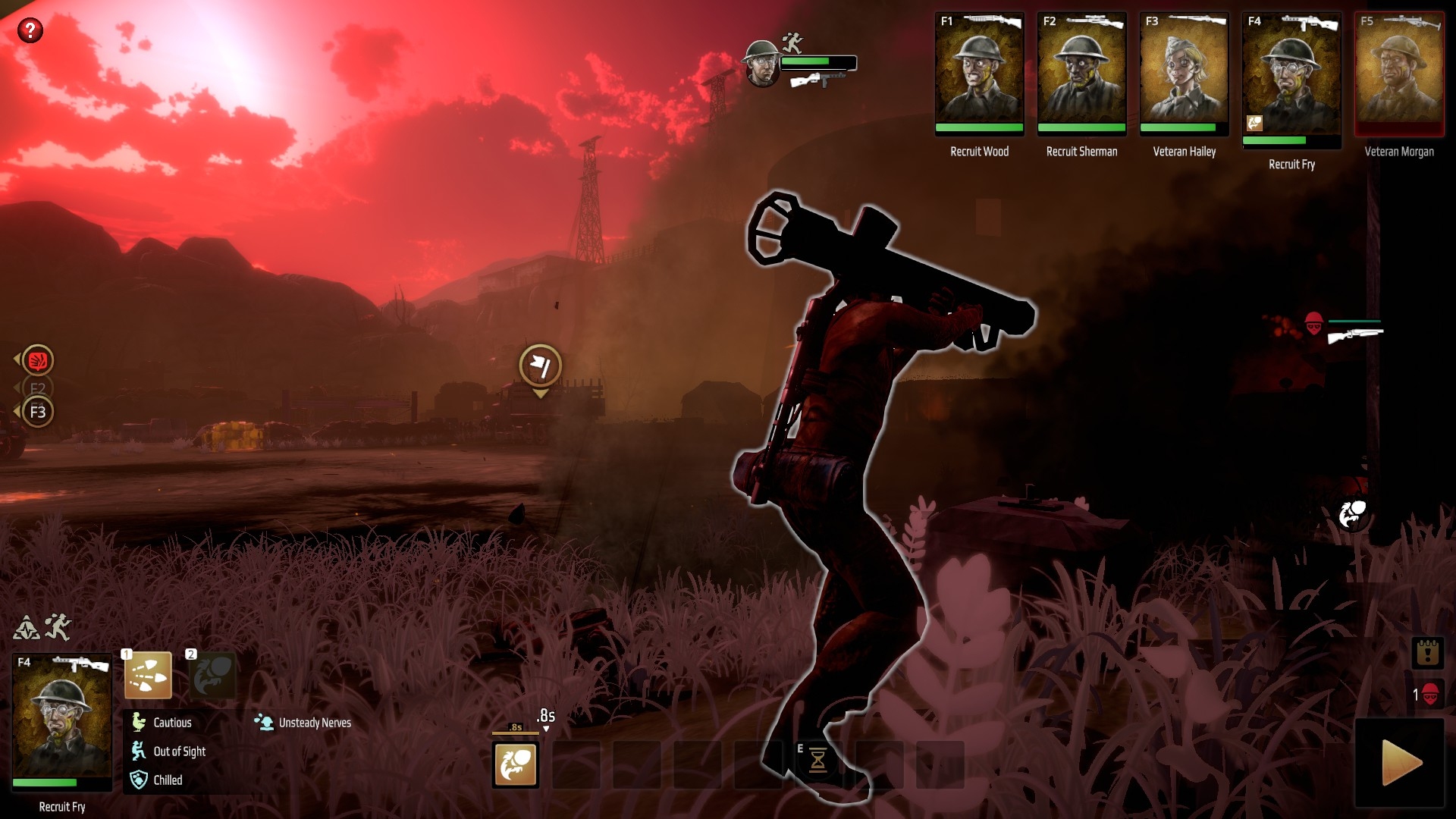 If you were feeling uncharitable you might describe the narrative as “underdeveloped”. The adjective I prefer is “understated”. There's something about the gritty tone and the fusion of sci-fi, horror, and WW2 that reminds me of early 2000 AD – never a bad thing. 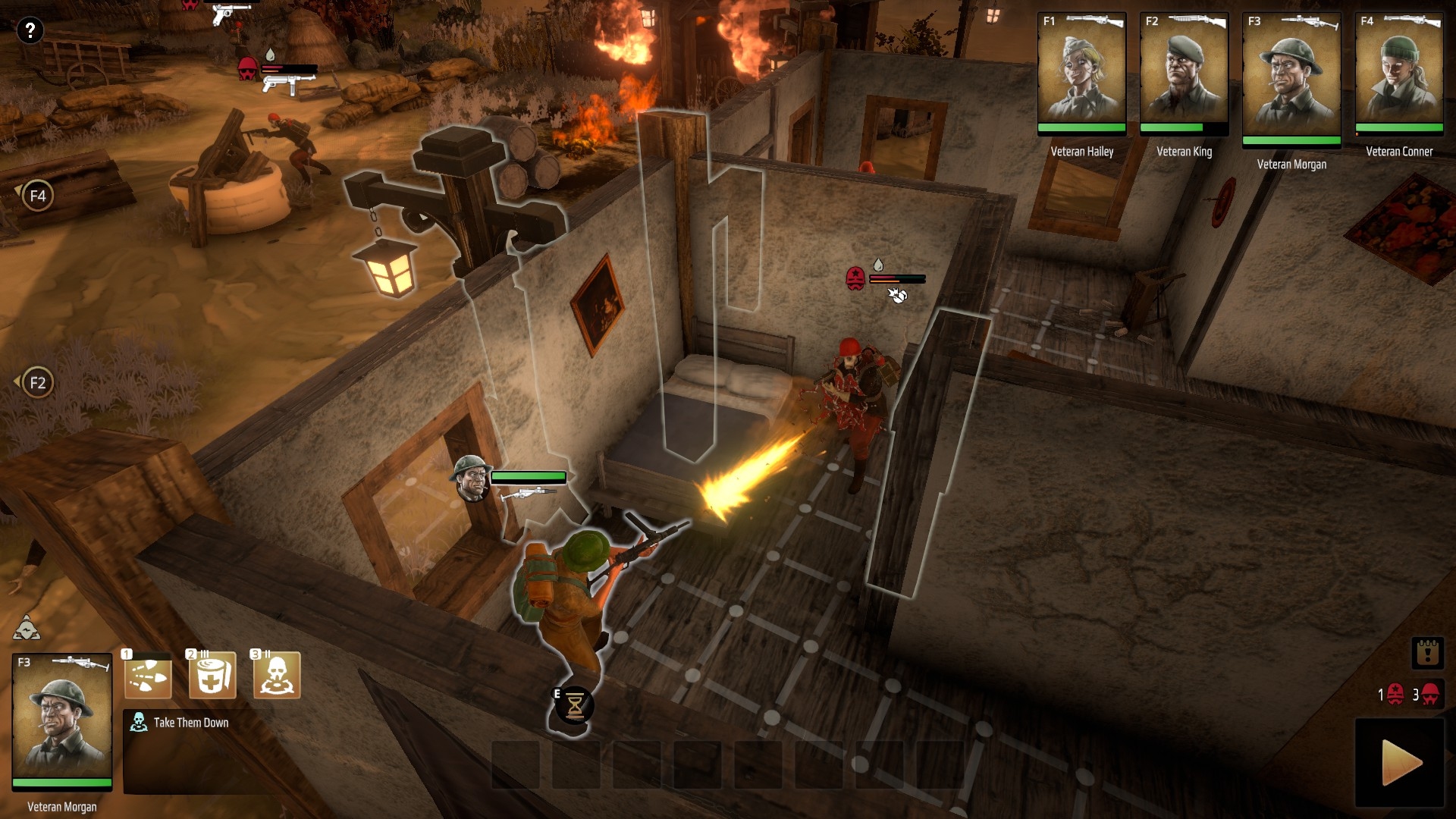 If they'd had a bigger budget, I imagine/hope PortaPlay would have provided a little more in the way of foe variety. The vast majority of the threats I encountered, in the tac dimension at least, were foot soldiers. Their numbers increased and the weapons they carried diversified as time wore on, but a sequel as AFV- and aircraft-light as BL would be something of a disappointment. 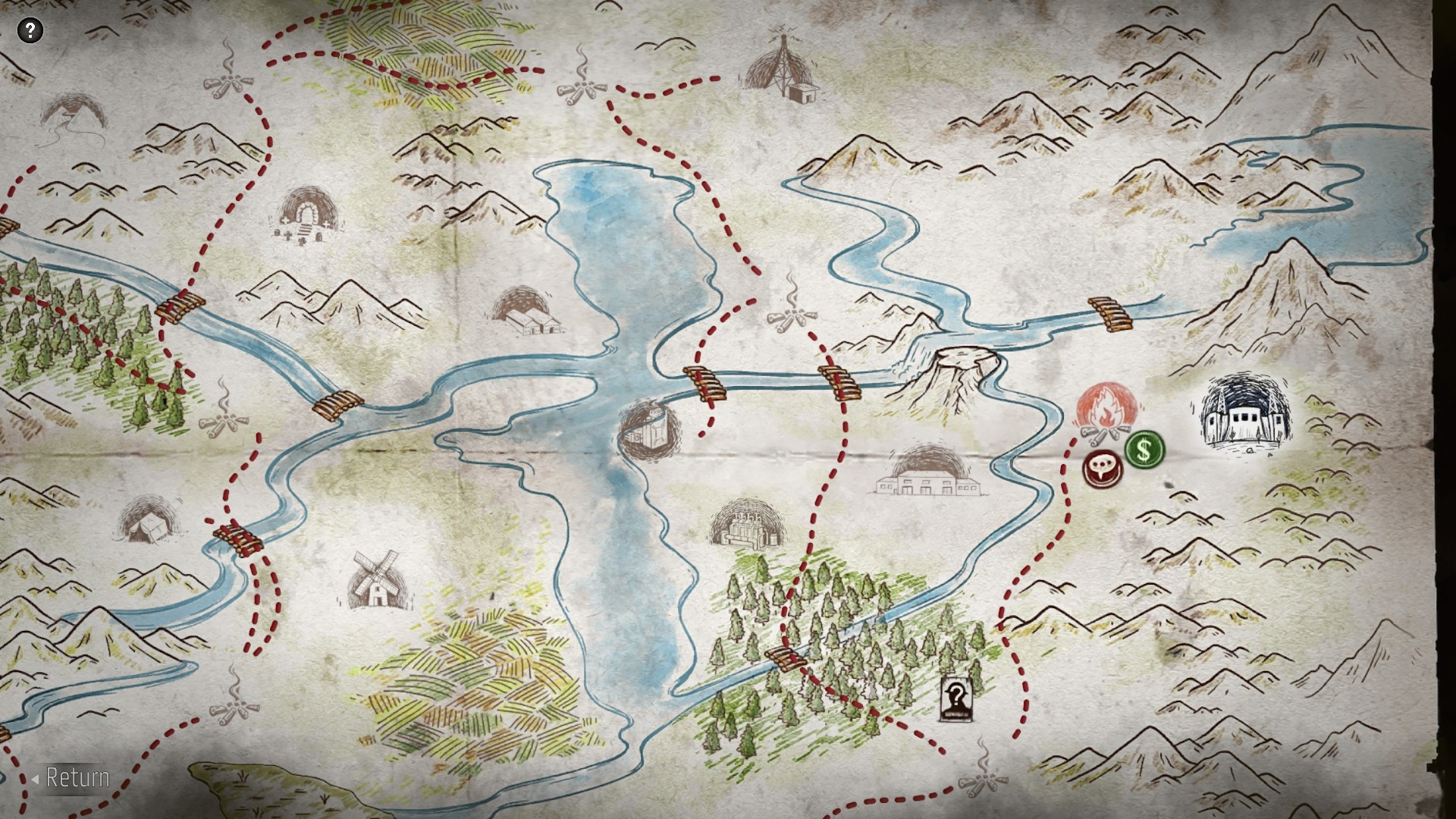 A commendably flexible approach to difficulty combined with a campaign generously sprinkled with mission and character development choices mean Broken Lines shouldn't attract many replayability complaints. It took me eleven hours to battle from Dakota crash site to hydroelectric dam and it probably would have taken significantly longer if I hadn't dialled down difficulty after a particularly painful outing ('Revenge') and then, lily-livered lightweight that I am, 'forgotten' to reset it once the hurdle was behind me. Next time - and there will be a next time - I'm determined to be less cowardly and map-wend via the numerous locales I rejected on my initial playthrough. 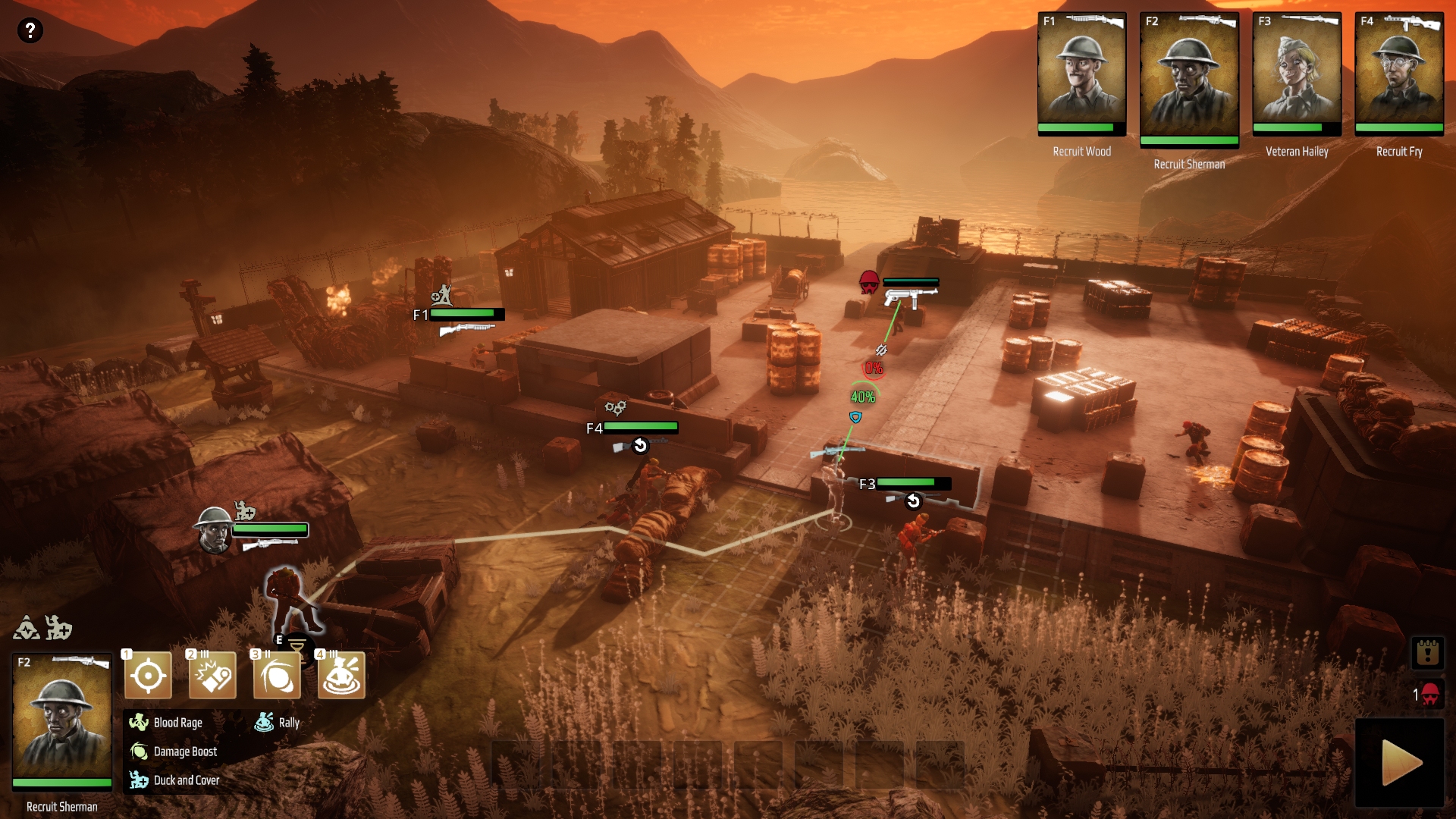 One of two turn-based tactics titles assayed on RPS this week, Broken Lines seems to have pleased me more than Corruption 2029 pleased Sin. Monty, my inner WW2 realism pedant, insists I point out that Avery and pals really should have arrived in Unnamed East European Country either bareheaded or with broken necks (parachuting in a Brodie helmet isn't wise) but even he warmed to this adept bedtime-postponer eventually. If you've silently stormed, kicked doors, frozen synapses, or formed jagged alliances in the past and enjoyed it, expect to break lines with a spring in your step and a smile on your face. 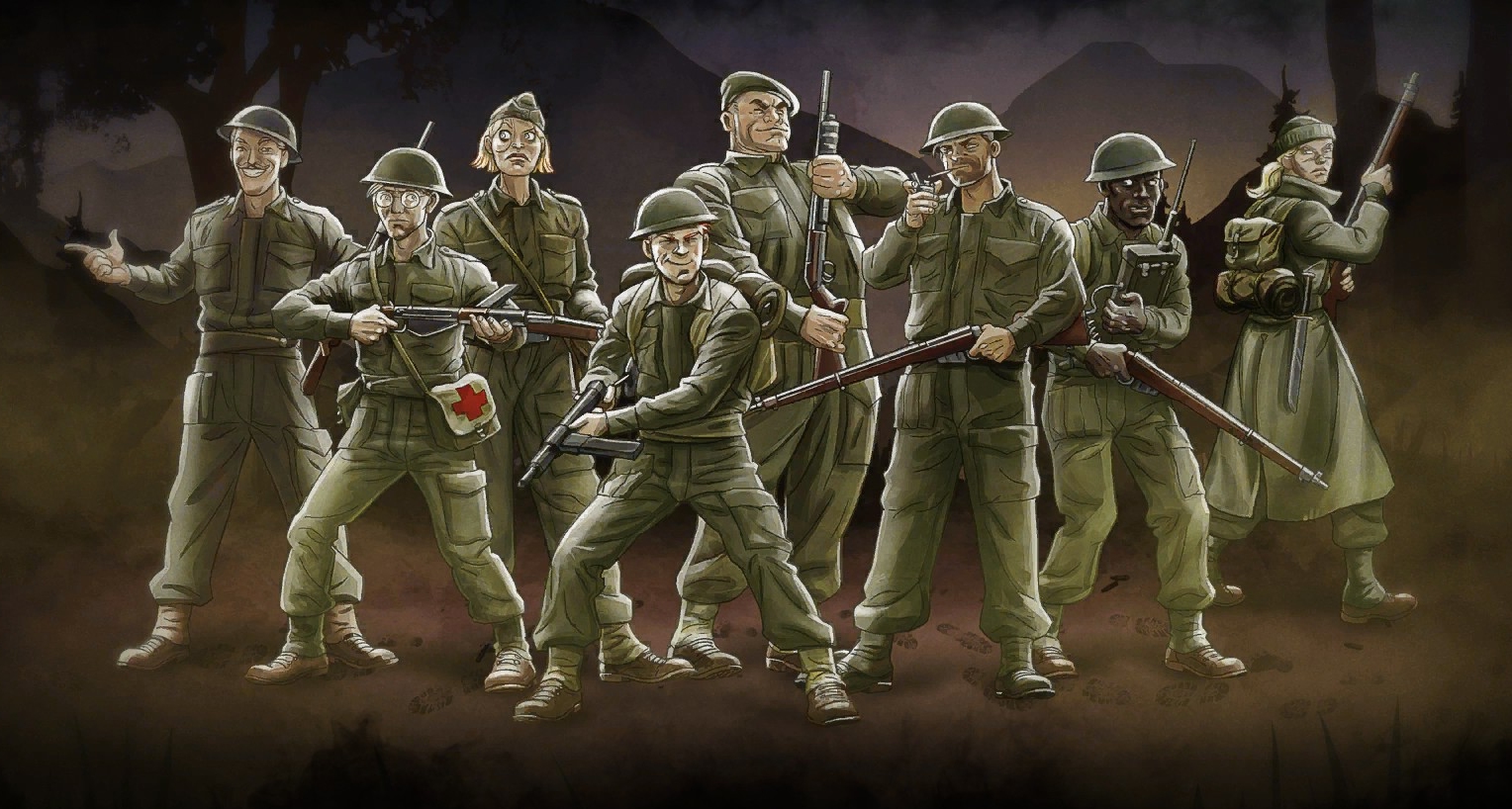