Operation Overlord entertainments don't come more all-encompassing than Futura's 1992 folly, D-Day. The French devs spent three years coding an offering as multifaceted as a Mk 2 hand grenade. Bursts of first-person Sherman tank simulation mingled with sorties in viewed-from-behind B-17 bombers. You bounced from issuing orders on a huge nodal map of the Normandy coast to guiding individual soldiers around isometric battlefields lousy with Panthers and pillboxes. The colour and scale of the June 6th, 1944 invasion was definitely there. Sadly, most of the tension and drama was not. 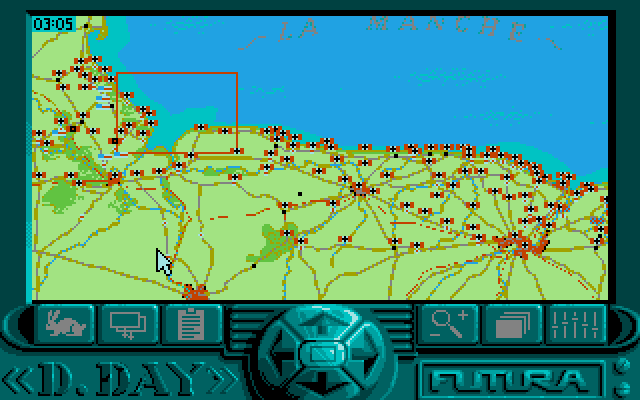 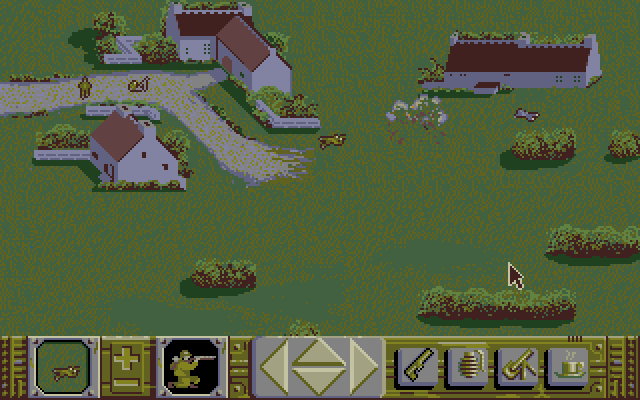 Questionable design decisions undermined D-Day's dazzling diversity. The strat map-sparked real-time skirmishes suffered particularly badly. Close Combat calibre sophistication in 1992 would have been asking rather a lot (CC precursor Iron Cross was still a couple of years away) but grumbles about the static enemies, scant fog-of-war, perverse pathfinding, and omnipotent Allied mortarmen (smart players quickly discovered that bomb-tossers were the only units they needed) were not unreasonable. 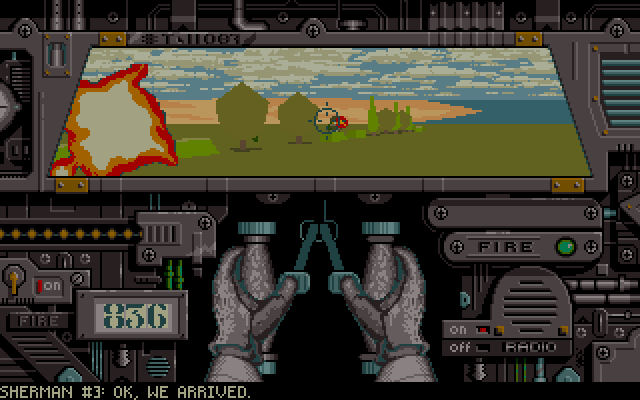 Sedentary panzers blighted the armour sim interludes too. Assuming you advanced slowly and kept a careful lookout for the Panzerfaustists that occasionally popped up from hedgerows like malevolent dormice, you were almost certain to prevail. 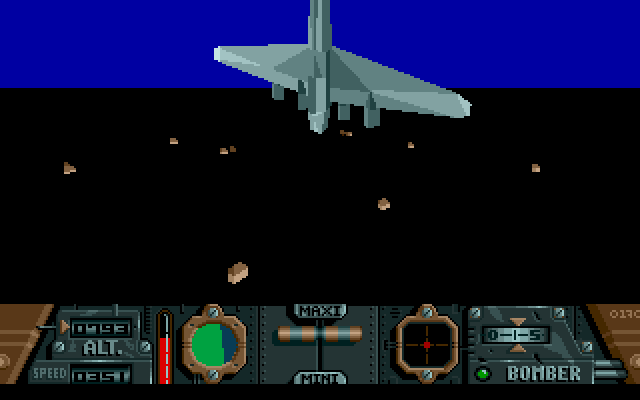 D-Day's trickiest tasks were its aerial ones. Although the easily stalled Flying Fortresses never had to contend with flak or fighters, their lack of bomb-aiming aids ensured sorties were demanding affairs. 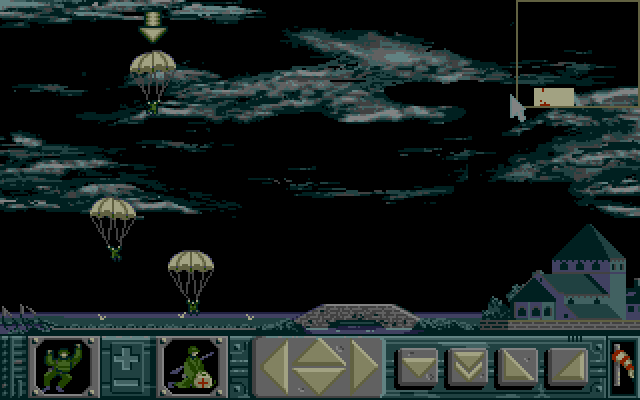 The breeze-influenced paradrops have probably aged better than any other aspect of the game. Choose to manually conduct one, and it's up to you to ensure a stick of amusingly animated individually controllable paratroops lands on a small DZ, rather than in the woods, villages and flooded farmland beyond. Aerial collisions collapse canopies, church spires snag them. If the nervy descents had been followed by engaging side-scrolling combat instead of weak isometric scraps and sub-par vehicle simulations D-Day might be remembered today for its accomplishments rather than its overambition. 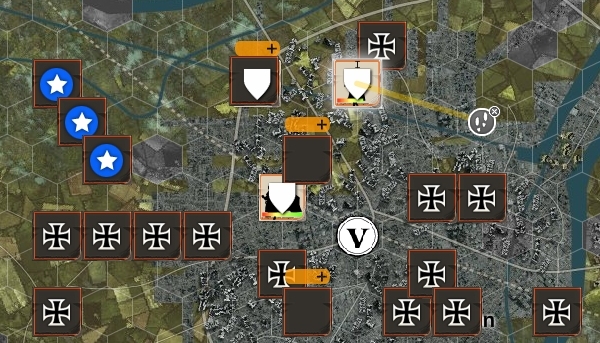 I can't think of a wargame that captured the chaos and uncertainty of the early stages of Operation Overlord better than Hours of War, an operational co-op project that sadly never made it off the developmental beach. Hailing from Helsinki, HoW seemed poised to revolutionise multiplayer wargaming when it abruptly disappeared from view along with its creators Sauma Technologies late in 2009. The open beta was Normandy-centred and agreeably unconventional as these paragraphs I penned at the time testify:

“Much of HoW’s novelty stems from the fact that you play alongside dozens of other human wargamers. Every army is divvied-up into battalions and each of those battalions is distributed at random to anyone that happens to log in. One game you might find yourself shepherding four of five Allied mechanized infantry companies still sandy from Omaha beach. The next you might be in charge of a clutch of hungry StuG tank destroyers or fragile-yet-fearsome artillery batteries.

There’s currently only one smallish scenario on offer (the struggle for Carentan) and many important features (command hierarchies, 2500-player campaigns, air cover, victory screens, drawing directly on the map…) are yet to be implemented, but the game is still capable of generating memorable moments. There’s a sense you just don’t get from other wargames of being in the midst of something huge and fluid – a sense of the importance of communication and coordination. As battles develop, the chat window begins to fill with confused sighting reports and panicky calls for support. Ad-hoc battle groups form and move off, defence lines re-orientate in response to perceived threats… It’s a lovely thing to be part of.” 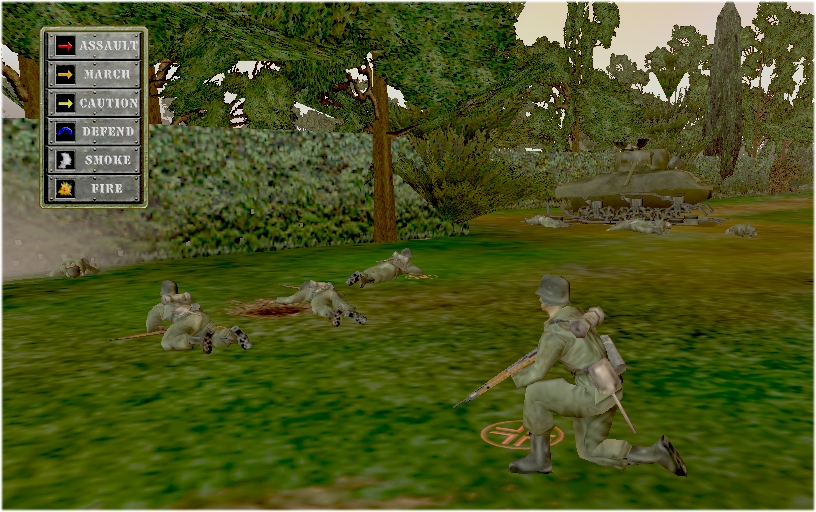 G. I. Combat, on the other hand, was not a lovely thing to be part of. This 2003 misfire had the misfortune to arrive at a time when Combat Mission enthusiasm was at its peak (The second CMx1 title, Combat Mission: Barbarossa to Berlin, was not long out) and had the presumption/courage to attempt something that to this day has yet to be satisfactorily accomplished – the 3Ding of Close Combat. The work of a studio led by Atomic Games notable Eric Young, GIC was savaged by reviewers like myself who were hoping the extra dimension would come with the AI improvements CC had been begging for since A Bridge Too Far (1997). What we found instead - bumbling cover-spurning infantry and eccentric, confused AFVs - felt nothing like progress. Muddy visuals, glitchy animations and Norman battlefields that lacked character and variety, only hardened hearts and further lowered scores. 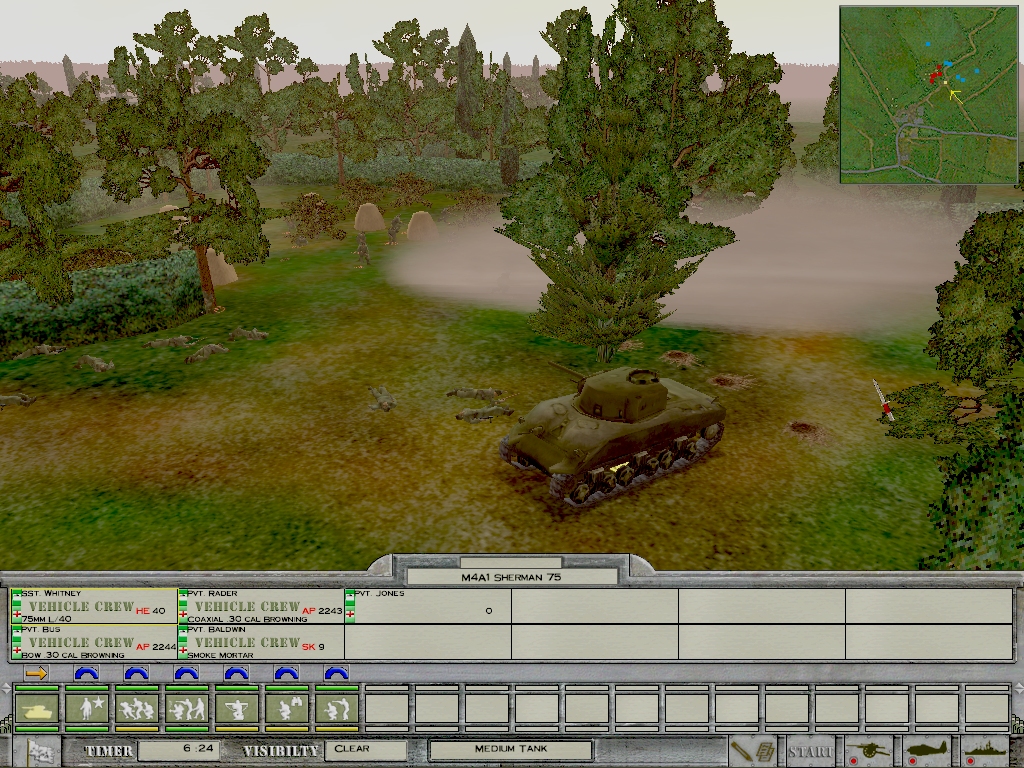 I'd be interested to read the text that accompanied my 41% PC Gamer UK score. I hope I wasn't so busy putting the boot in that I failed to acknowledge Freedom Games' pluck. 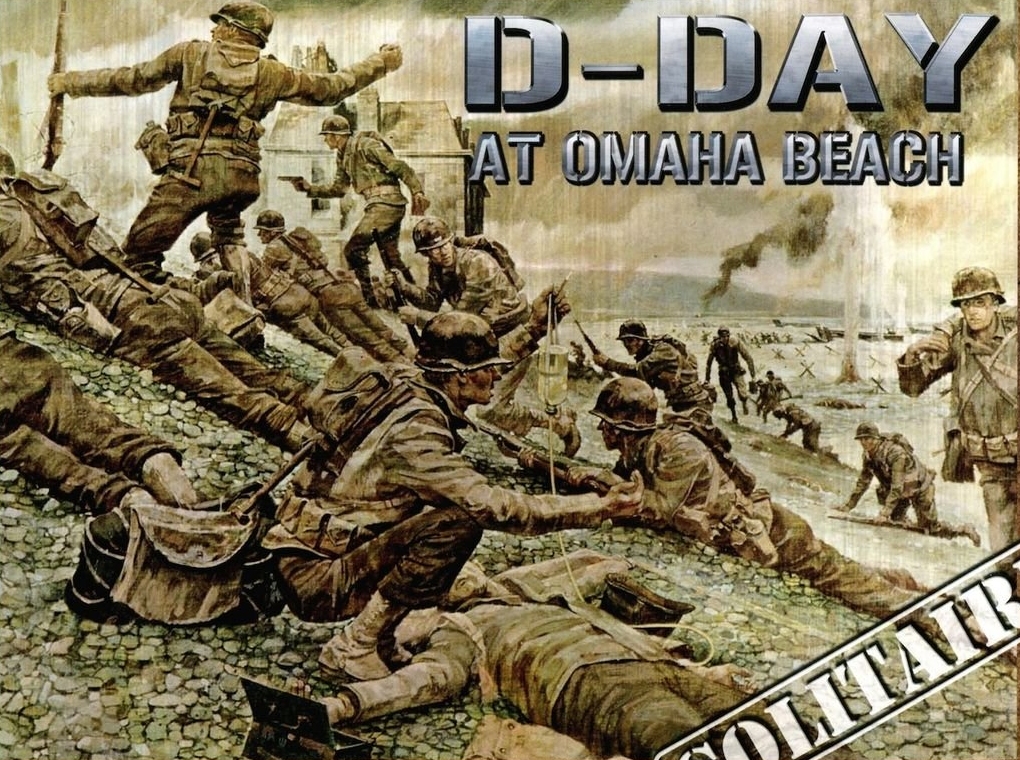 An Overlord experiment that succeeded as spectacularly as G.I. Combat failed, cardboard classic D-Day at Omaha Beach, worms its way into this piece by dint of free Vassal and Tabletop Simulator modules, and a digital version that silly sausages Decision Games still don't offer in downloadable form. 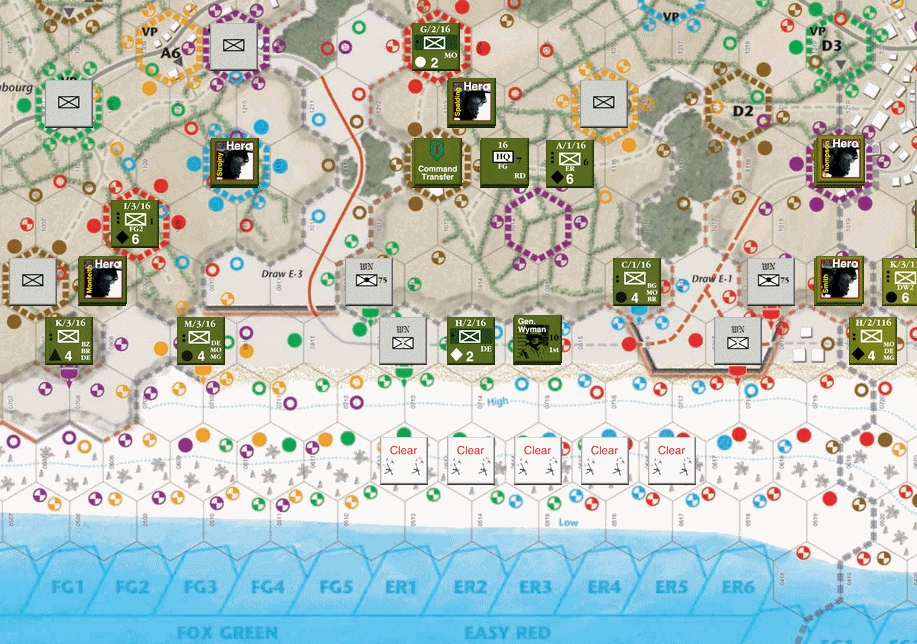 One of the highest rated solitaire wargames at Boardgamegeek.com, DDaOB communicates the complexity and challenges of D-Day's costliest landing better than any PC born-and-bred alternative. Improbably, it does it without dice too. Combat results are completely deterministic, the game's enlivening unpredictability coming largely from card-based German 'AI' and US arrival patterns, 'chit-pulled' enemy dispositions smothered in fog of war, and a simple yet influential special weapon mechanic that means some depleted US units don't haven't the tools necessary to neutralise certain 'Widerstandsnests'. 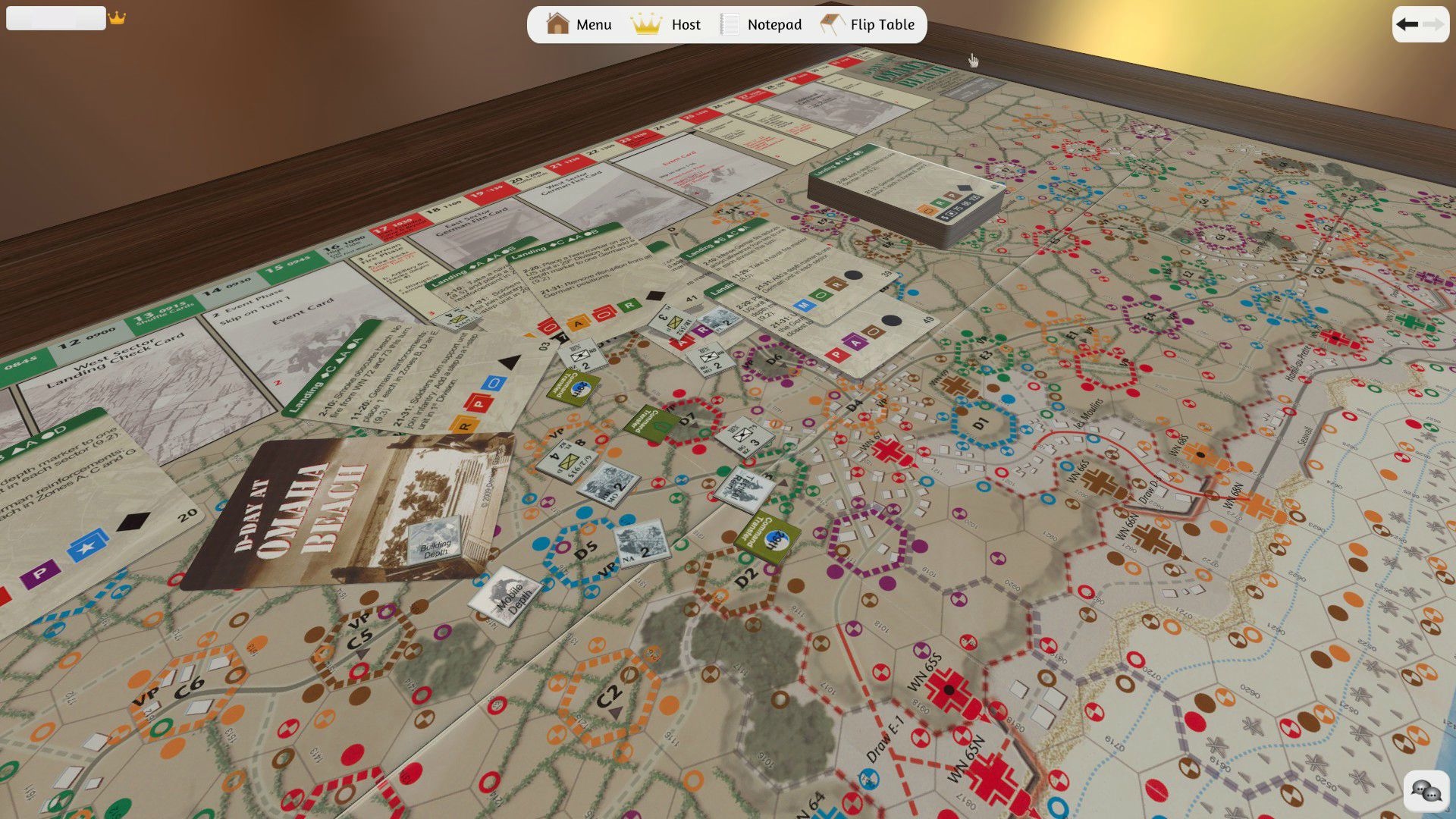 The need to manually check LoS prior to every lead exchange is eliminated by ingenious colour-coded map icons that not only indicate which bunkers are visible from which hexes but also distinguishes different exposure levels. All decent accounts of the fighting on Omaha Beach emphasise the crucial contributions of figures like Norman Cota and George Taylor. DDaOB acknowledges these individuals and their impact with a transformative leader/hero mechanic that overrides a punitive but historically-rooted two-actions-per-sector-per-turn rule. 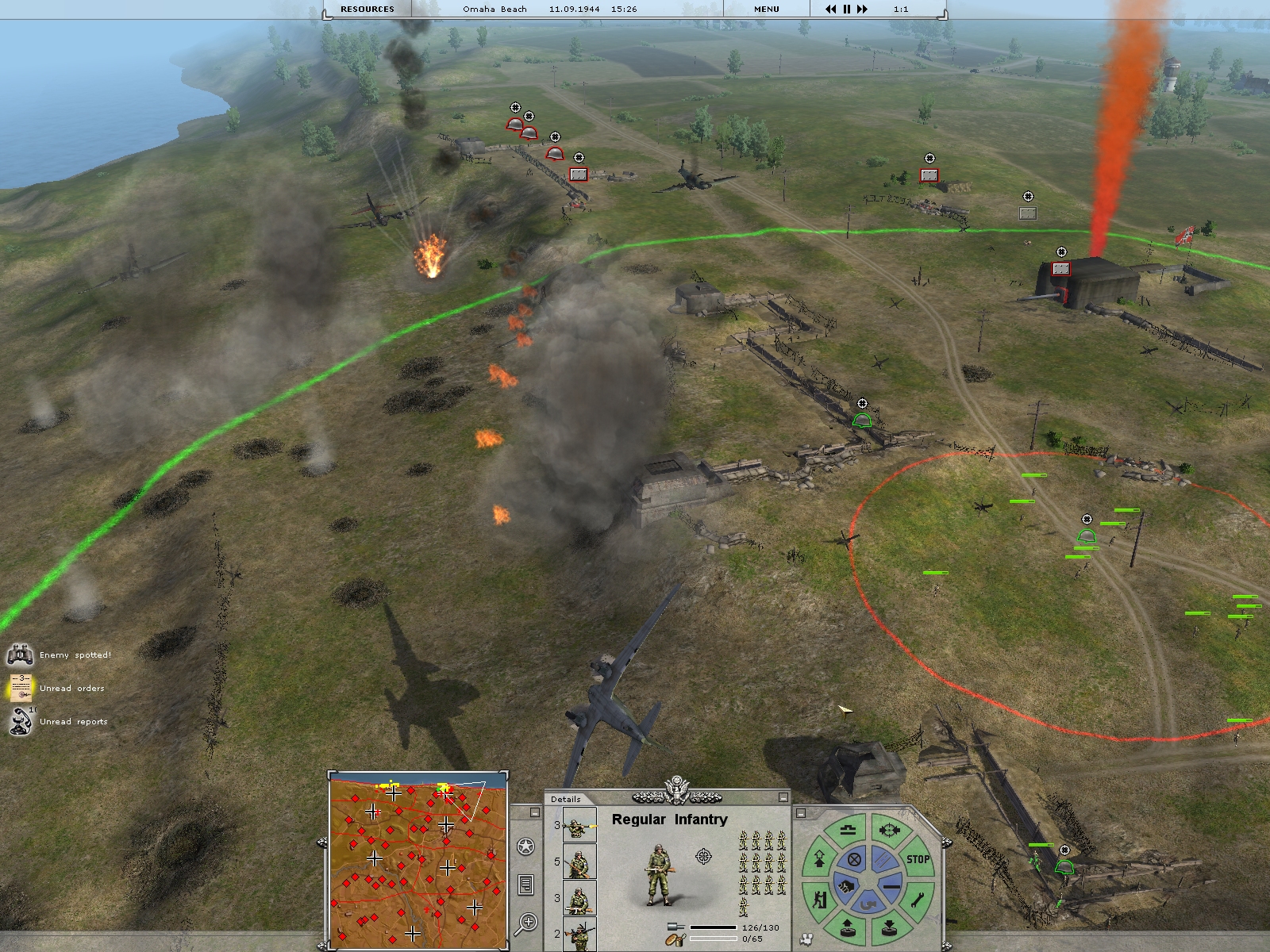 Of the numerous traditional real-time strategy titles that have tackled Operation Overlord, Game Factory Interactive's Officers is probably the most deserving of a mention in this catalogue of creative courage. Released in 2008, it attempted, with some success, to fuse the attractions of a dynamic strat map with the thrills of Sudden Strike-style scrapping. Venues were huge, heavily populated, and dotted with objectives that, once secured, furnished different logistical benefits and expanded a vital supply net. More than any other game in its class, Officers conveyed a sense of Overlord as a vast operation, a tapestry of interdependent tussles. 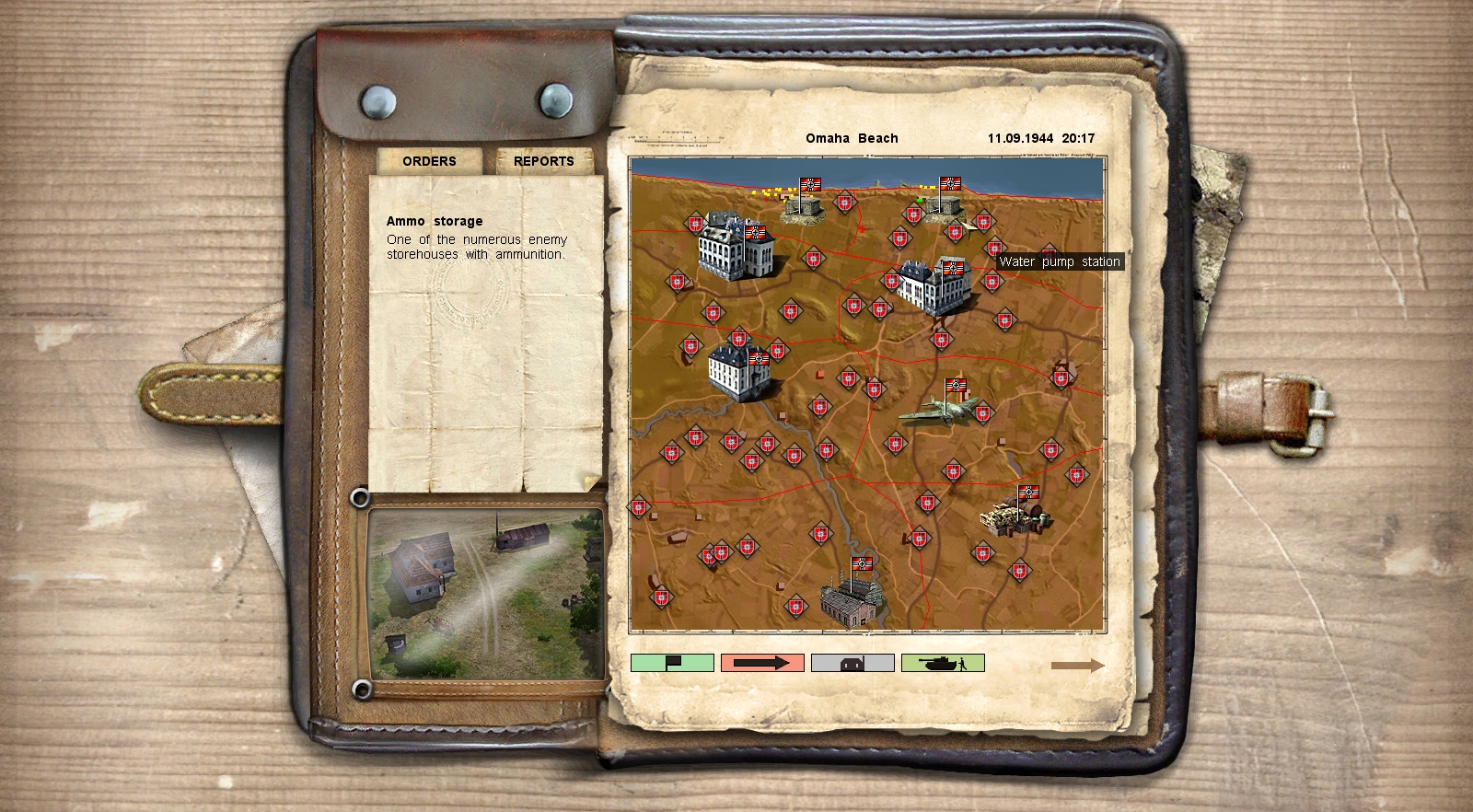 The warfare was sufficiently redolent for Matrix Games to attempt some code polishing in 2009 and to describe the resulting re-release as a "wargamer's RTS" (“It's still a real-time strategy game, but it has a lot more strategy and less twitch than most, combined with a good historical context and historical units and terrain.”). 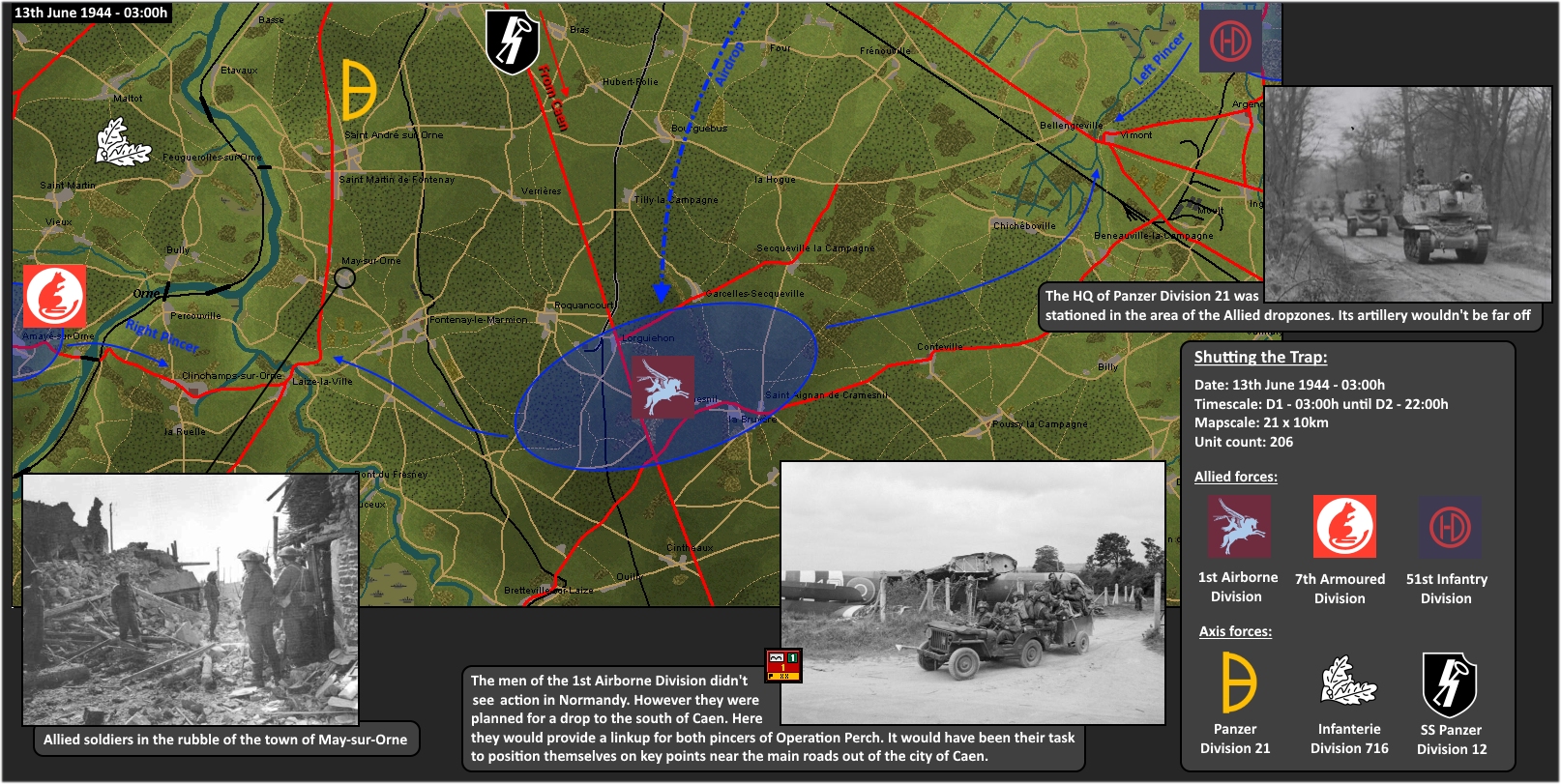 Oddly, two of our most forward-looking and ingenious wargame developers, Graviteam and Panther Games have shunned Normandy for years. Given Command Ops 2's airborne roots, it's strange none of the free base game's eight payware add-ons contain recreations of Operation Tonga or the Battle of Carentan. Thankfully, in the case of CO2 at least, modders are now stepping in and filling the gaps. Some of the most exciting and lively Overlord wargames released recently are free mods for Panther Games' incomparably fluid and naturalistic operational offering.