I pride myself on being able to spot game flaws lickety-split, but it took me two whole days to put my finger on Ultimate Admiral: Age of Sail's key shortcoming. Game-Labs' new surf-and-turf RTS is horribly, unforgivably, short of dinosaurs. Compare and contrast:

A) Having landed on a small tropical island to gather fresh fruit and fill water barrels, the crew of HMS Vortigaunt run into a party of Spanish sailors engaged in the same activity. A fairly dull skirmish ensues.

B) Having landed on a small tropical island to gather fresh fruit and fill water barrels, the crew of HMS Vortigaunt run into a Tyrannosaurus Rex busy tearing the throat out of a wounded Ankylosaurus. A flipping ace skirmish ensues. 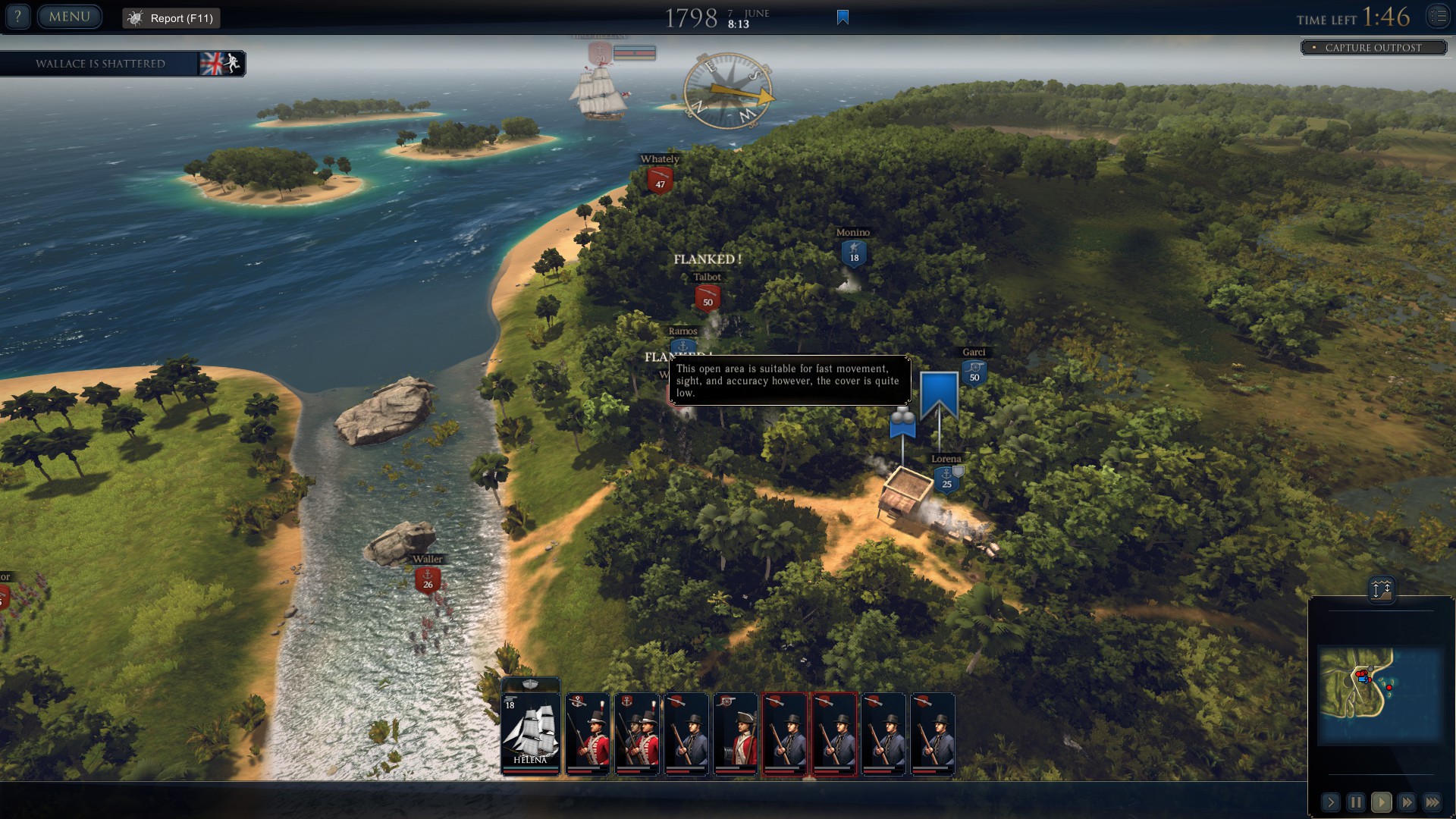 The half of this £34 Early Access offering most in need of thunder lizards is definitely the dry half. As I'll explain in a minute, the ship scraps are rather good even without plesiosaurs plucking marines off poop decks. The uncharitable thoughts tend to appear after the longboats have grooved beaches - when the lines of soggy-stockinged infantry are trading musket volleys or tramping through jungle and o'er hills. They are essentially the same uncharitable thoughts that slightly tainted my view of Game-Labs' American Civil War twosome: why isn't important tactical information more readily available?... I wish there was something more to this than lots of right-clicking and the odd “Charge!” order. 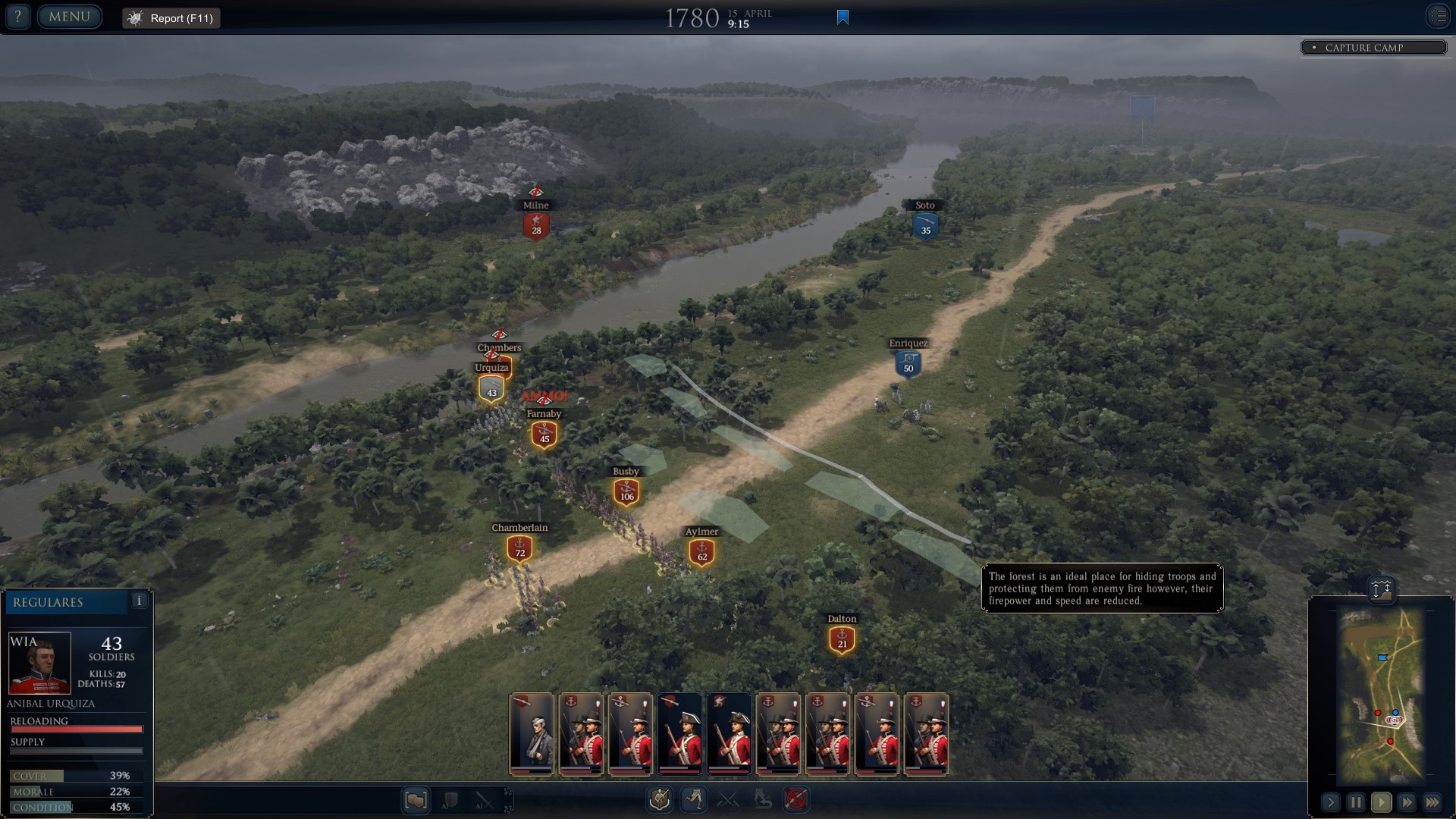 I (still) admire the smart foes, and adore the way I can crayon unit paths directly onto topography. Group-selecting a bunch of units, then, with a single fluid click-and-drag, scribing a sinuous battle line at their destination? Marvellous. The formation-free UA:AOS makes choreographing troops gloriously easy. 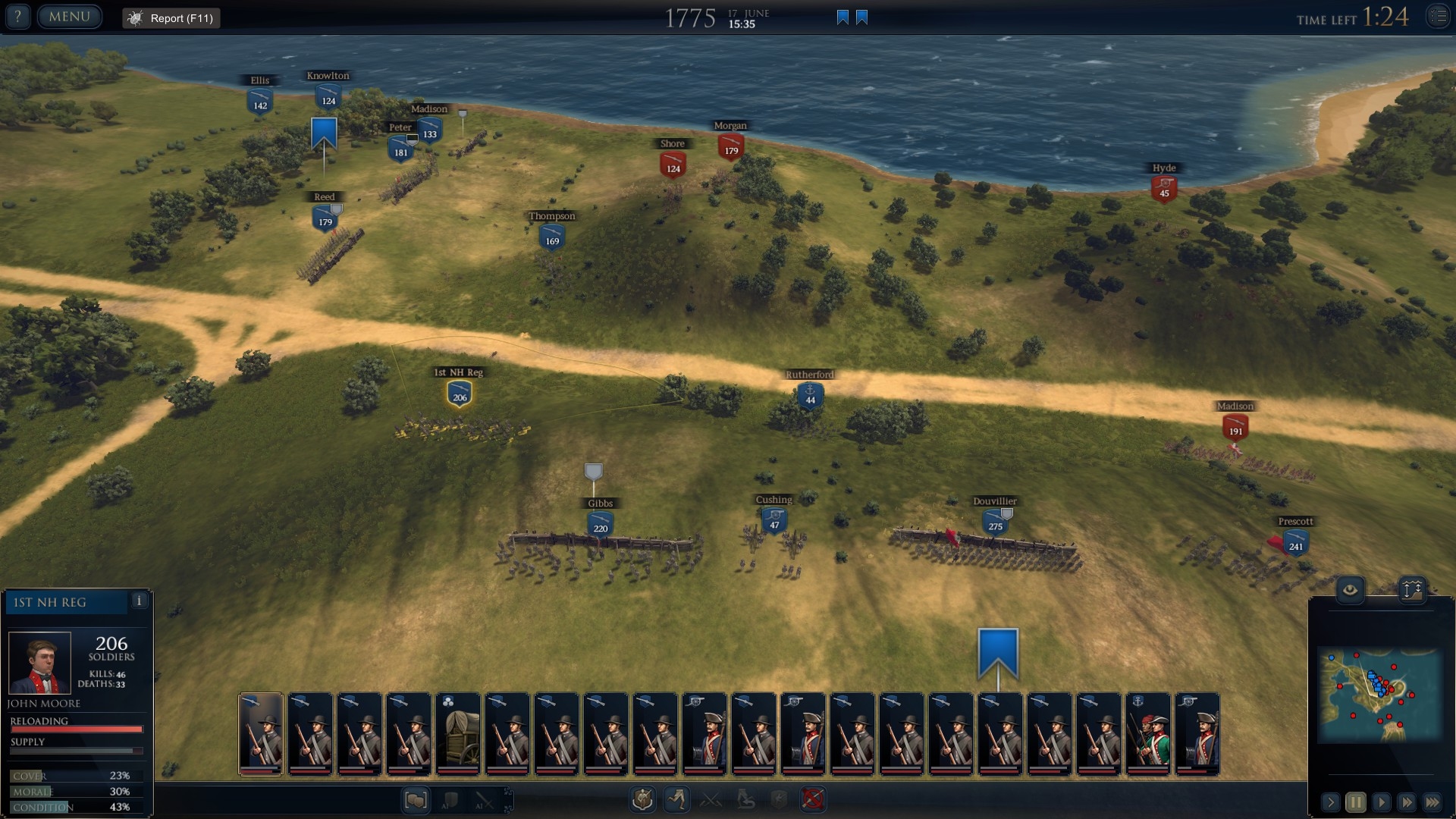 What I struggle with is situations like the one pictured above. Two of the friendly regiments are wavering, the rest are as steady as the Rock of Gibraltar. I should and need to be able to tell the shaky from the steadfast at a glance, but I can't because of the game's strange antipathy towards that RTS staple, the info bar. 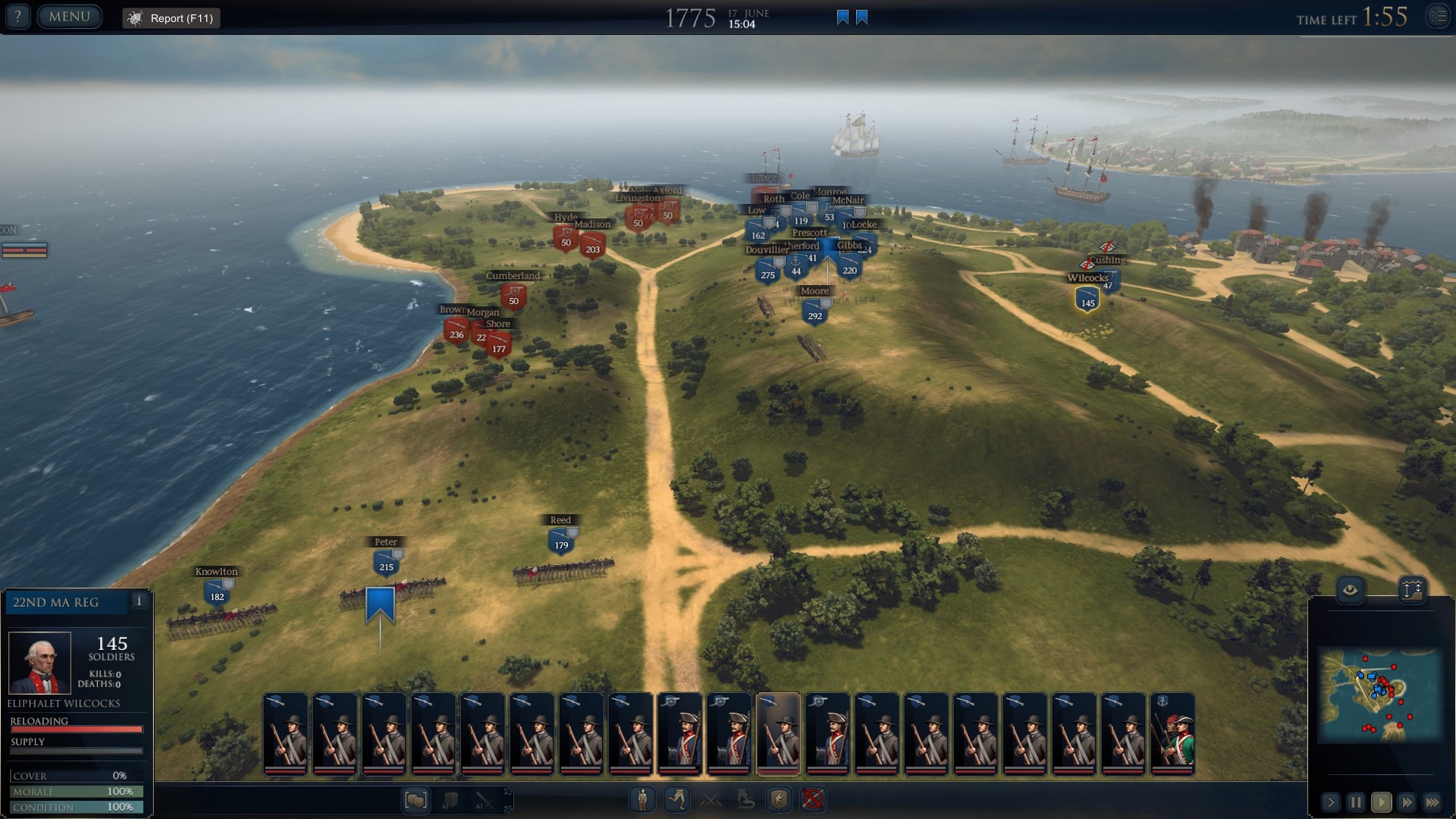 I don't only struggle to read engagements, when those engagements are sizeable I also struggle to cope with them without constant recourse to the pause button. By default infantry march at a fair old lick and morale reservoirs empty alarmingly quickly. In a large spread-out scrap like Bunker Hill – the second scenario in the American campaign – it's all too easy to lose sight of the big picture. I spend a minute or two helping the three-regiment line on the banks of the Mystic River weather a determined British push, only to look up and realise that the redcoats have taken advantage of my absence, and overrun one of the batteries on Breeds Hill. Another slower speed setting would help. The optional WeGo mode born-and-bred wargamers may end up yearning for is, sadly, about as likely as those dinosaurs. 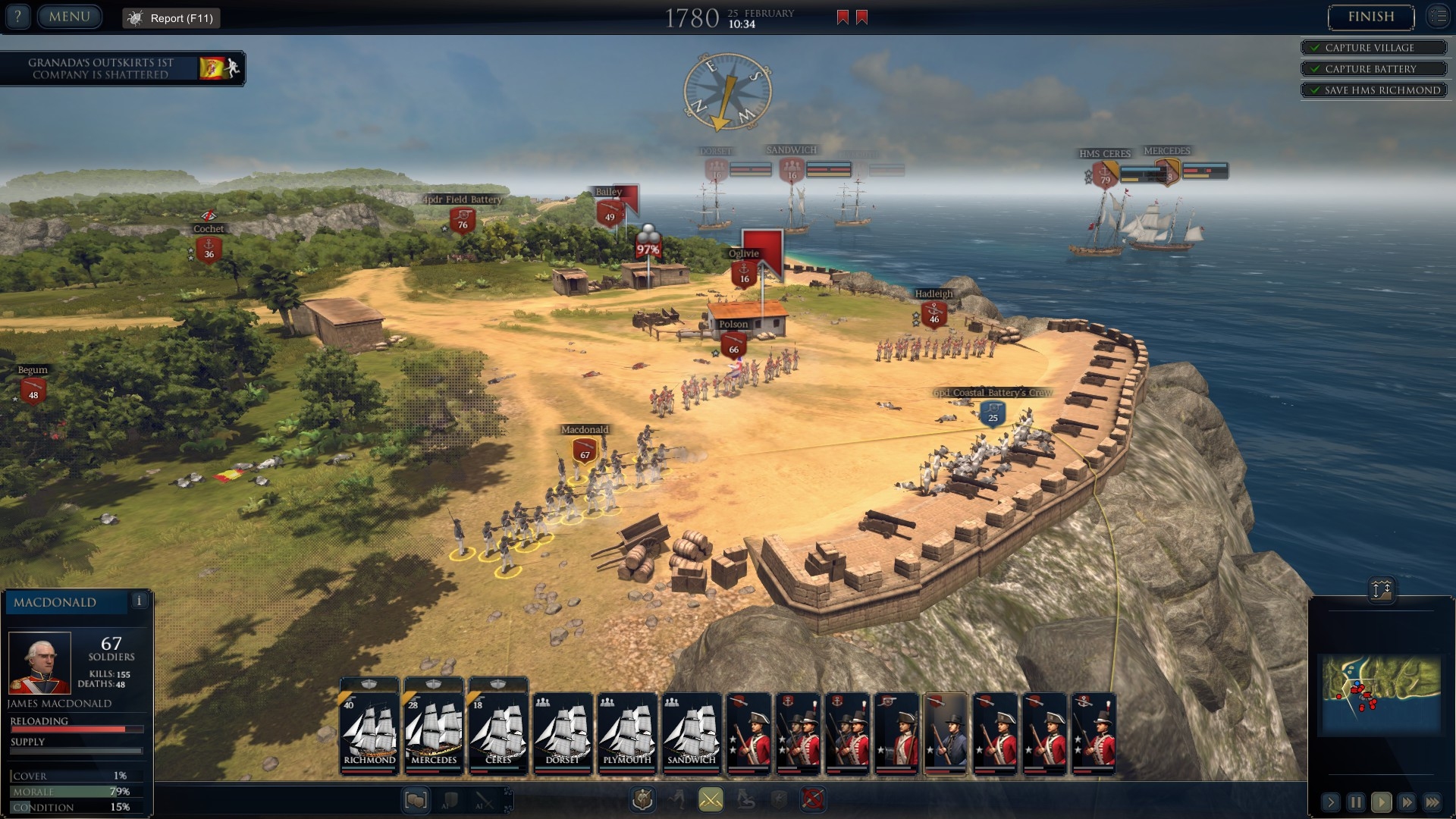 It doesn't help that the slightly bland land warfare is depicted in a slightly bland fashion. The stylish tilt-shift aesthetic of Ultimate Generals Gettysburg and Civil War has been replaced by something much more prosaic. Because the high altitude views are so redolent of Empire: Total War, the camera's refusal to drop to ground level (even treetops are out-of-bounds) comes as something of a disappointment. You can spin that mouse wheel as much as you like, warriors remain resolutely formicine. 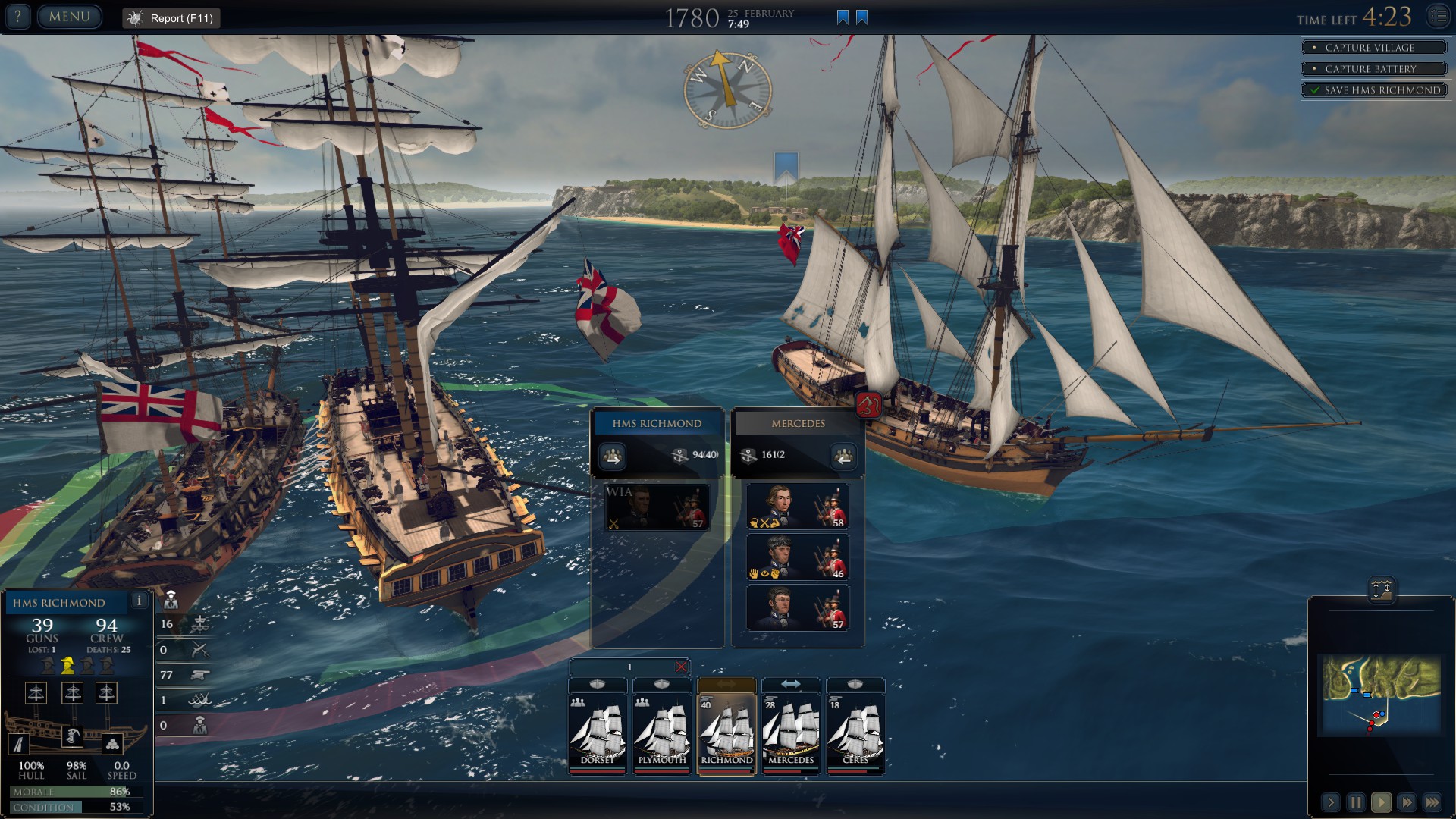 I assume the ships are the reason sprites have been given the heave-ho.

At sea at least, UA:AOS is a match for all of its peers. In fact, I'd go so far as to say it's probably top seadog. It's a while since I played both TalonSoft/Akella's Age of Sail series*, and Empire: Total War, but I don't remember enjoying their turnless naval tussles as much as I've enjoyed the ship-to-ship actions I've fought this past couple of days. 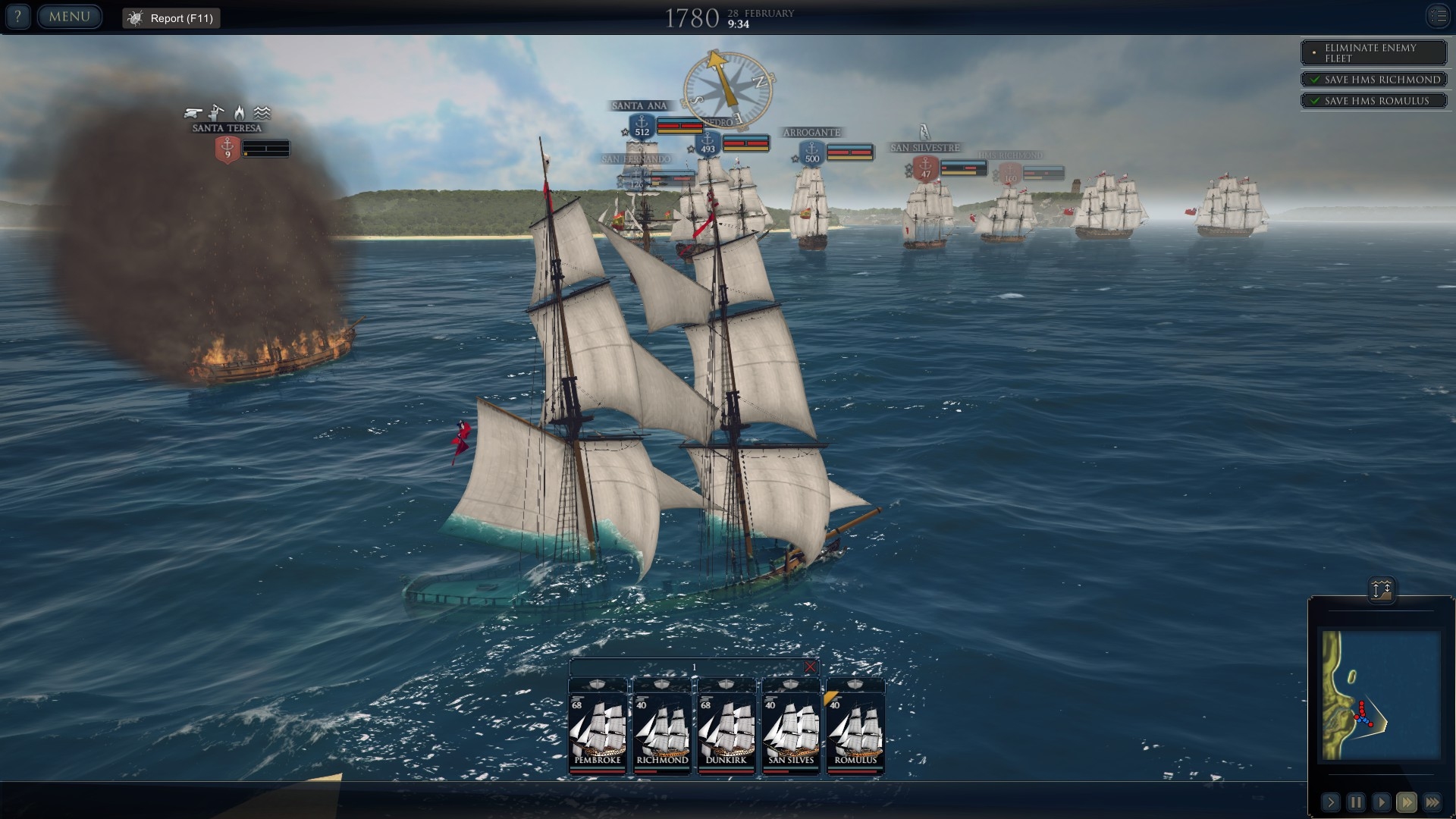 Control is as elegant* as it is on land and, for some reason, Game-Labs' allergy to info bars doesn't apply to brine denters; hovering above the crow's nest of every ship is an icon showing the condition of hull, side planking and sails. Whereas footsloggers always look to you for instruction, individual ships can be passed to the AI if things get too hectic.

* And as minimal. I'd have appreciated more formation options than “line of battle”. 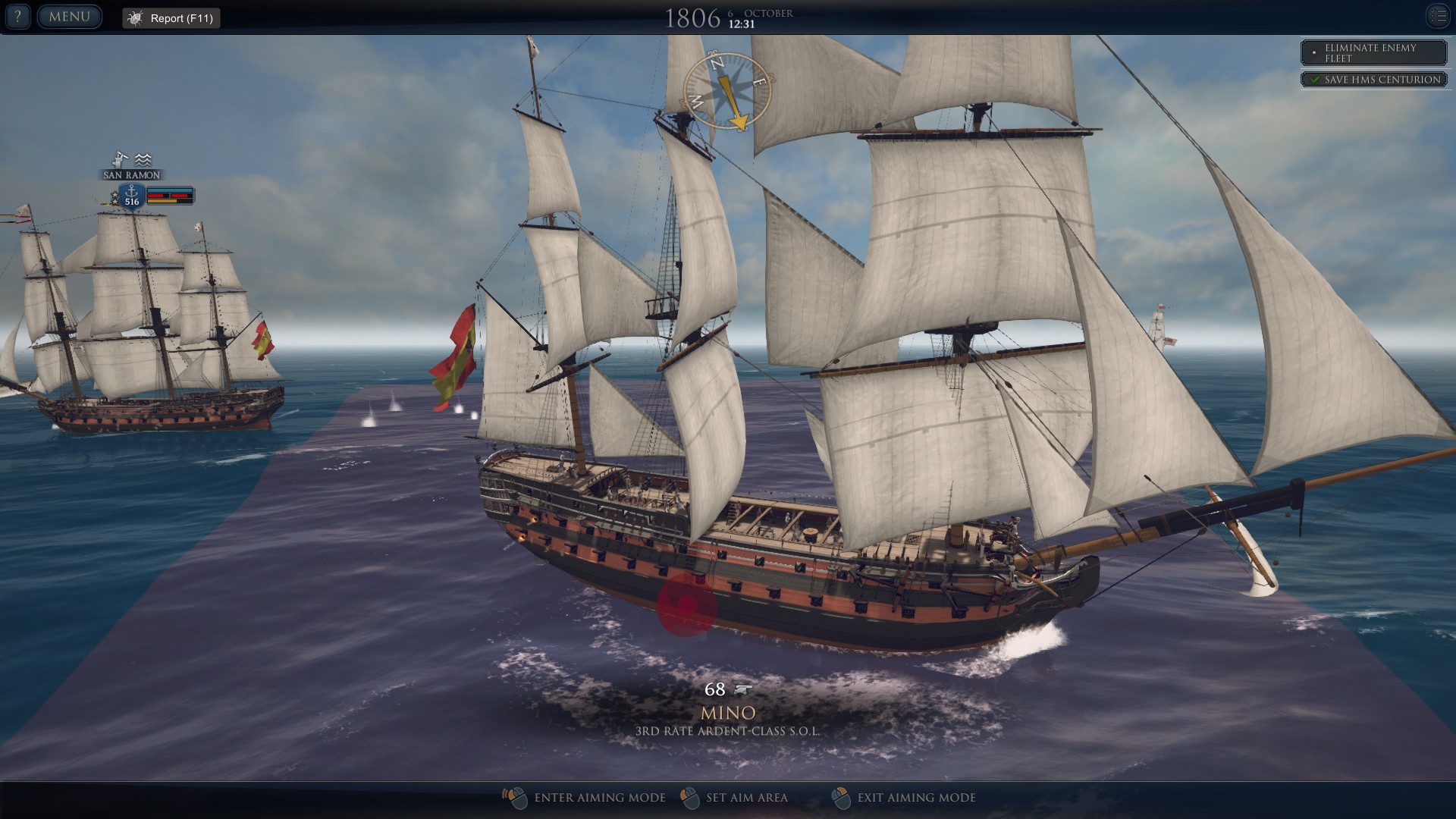 There's colour, novelty, and intimacy out at sea that's absent on shore. As well as selecting ammo types, you can specify aim points on a particular target using what is almost a first-person view. Want to ventilate a stern gallery, rake a quarterdeck with grape shot, or attempt to hole a threat below the water line? Click on the desired spot and your gunners will do their best to oblige. 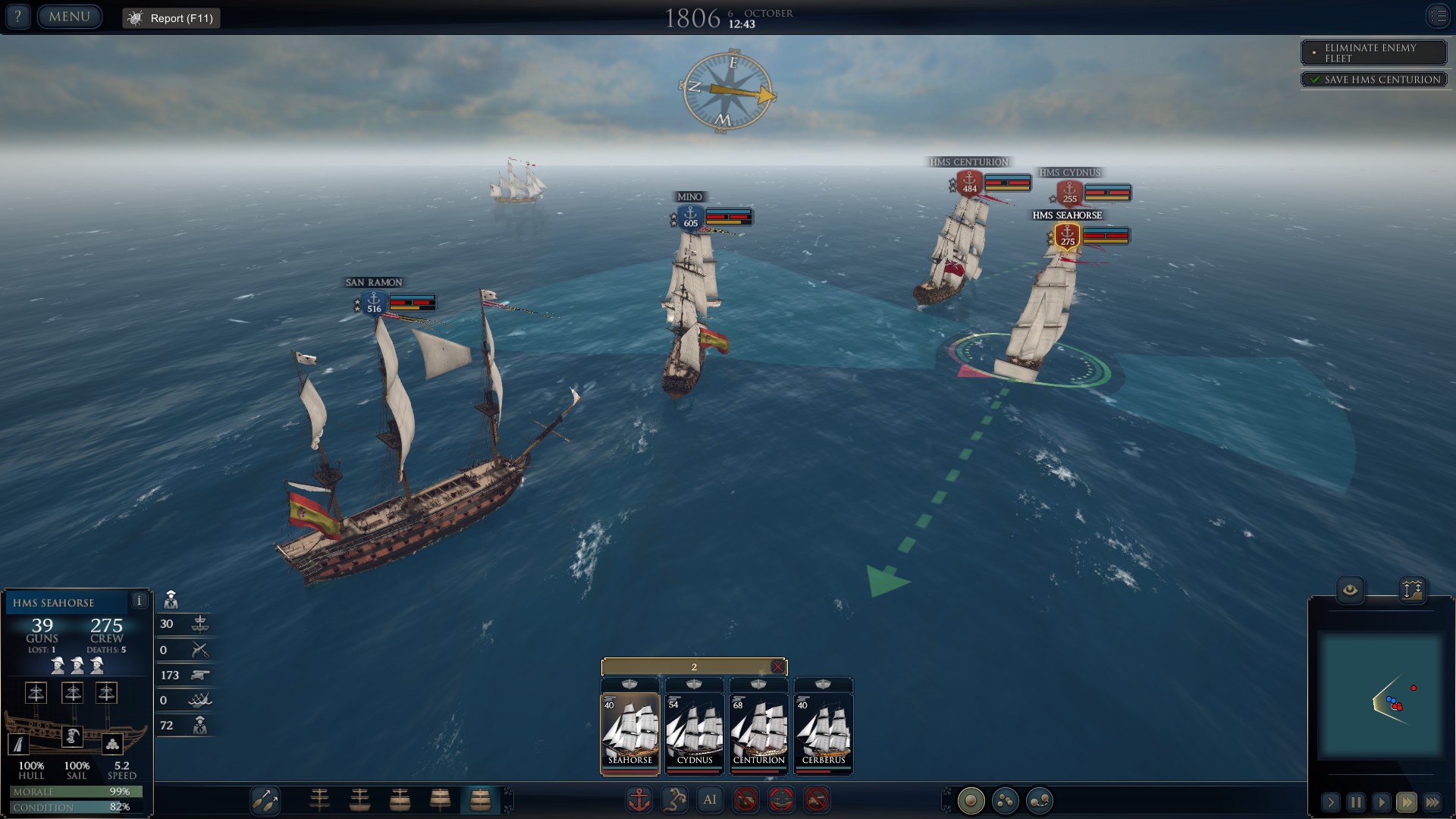 The ballistic algorithms are relatively sophisticated with shot angle, calibre, and plank thickness all influencing the chance of penetration. Guns on the leeward side of a warship heeled over by strong winds suffer serious range penalties – a fact made crystal clear by the helpful multi-function information halo that rings the hull of a selected craft. 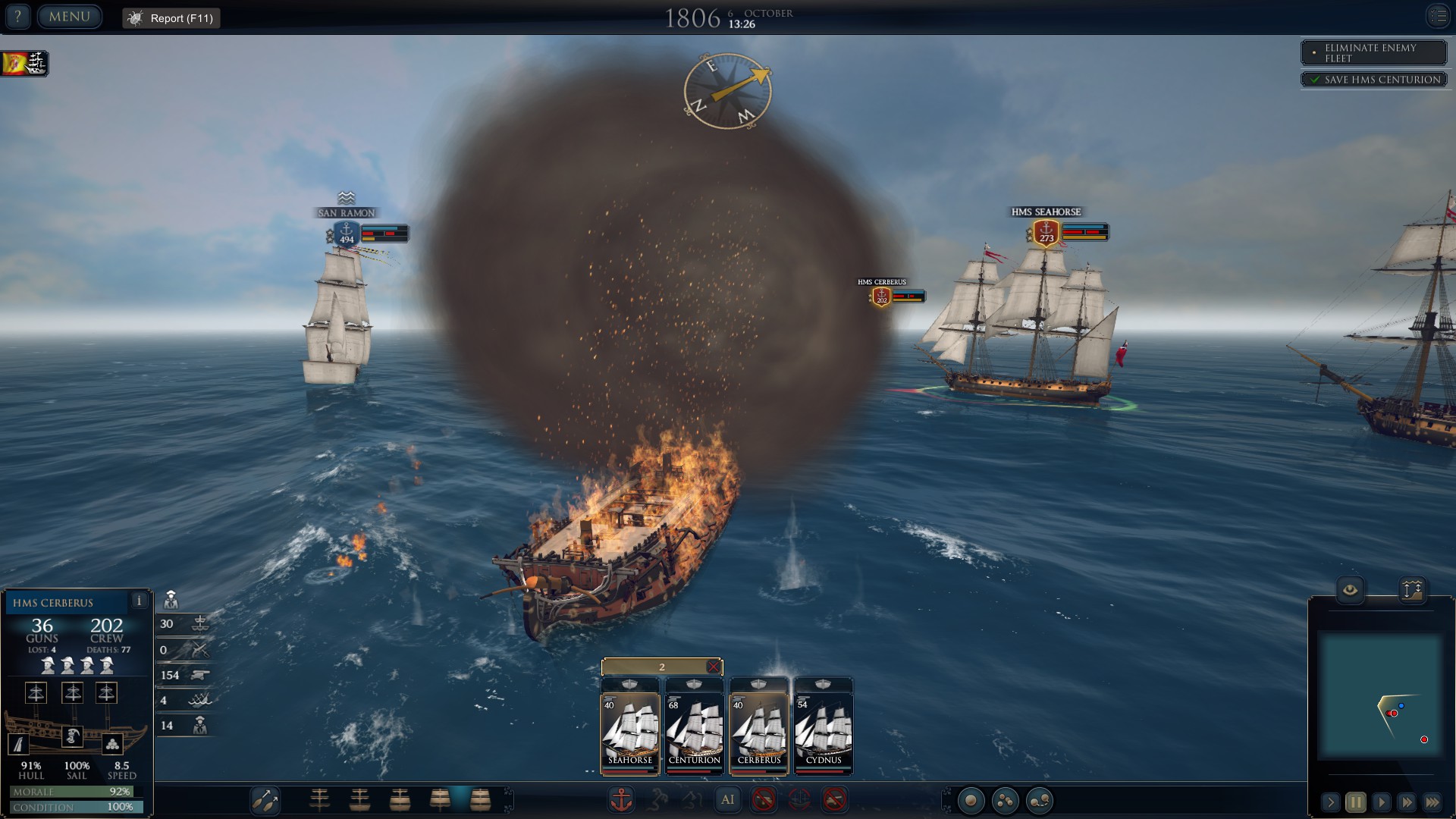 Occasionally a hurtling sphere will topple a mast, kindle a fire, or have an explosive encounter with a magazine. While blazes don't produce the towering smoke columns they should, and rare terminal detonations don't eject nearly enough debris, they do - along with special damage types like crew shock and broken pumps - endow wet combat with the kind of drama and twists that make tactical wargames tempting AAR subjects. 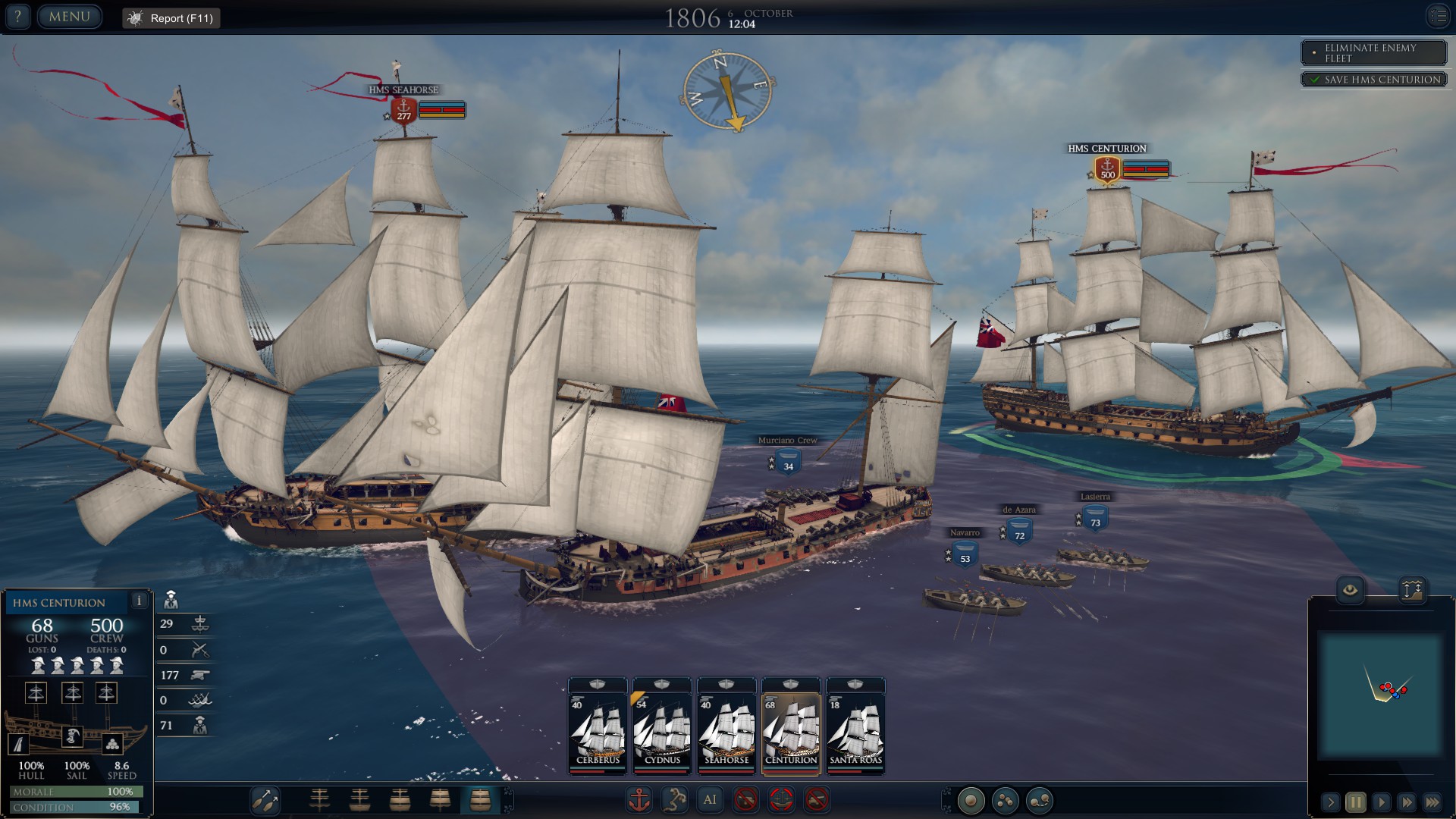 I love the way the crews of sinking vessels automatically lower boats and make for nearby friendlies. I couldn't have been happier when an outgunned Spanish man-of-war that had surrendered to me early in one clash, quietly unsurrendered a little later when left to its own devices (I'd forgotten to assign a prize crew). 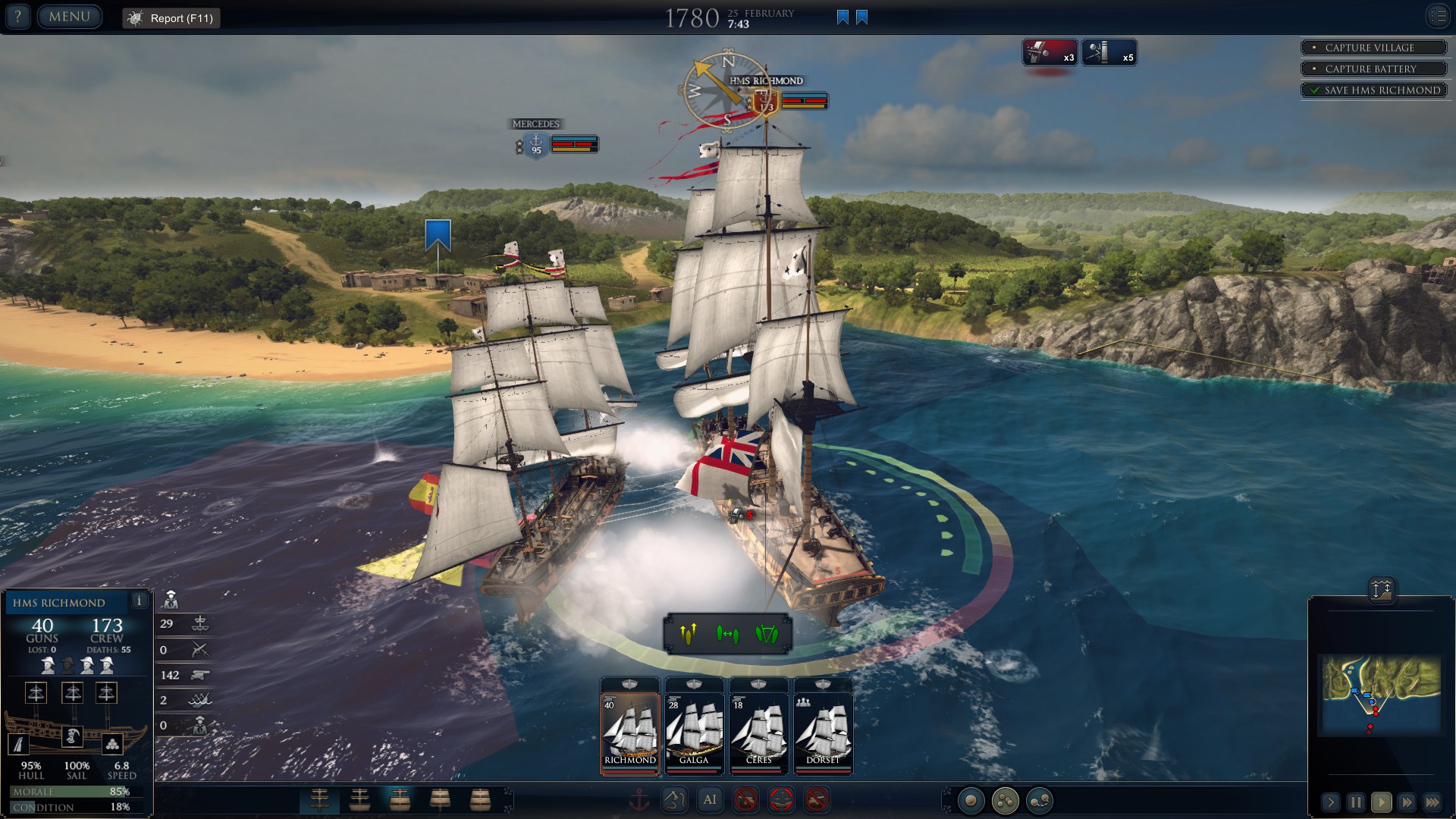 Grappling an enemy ship in readiness for boarding could so easily have been a simple matter of closing to within a specified range and dabbing a key. In fact it requires deftness and timing, relative angles and speeds also being considered. Because a seized ship is more valuable than a sunk one (prizes can be pressed into service immediately, and join your persistent fleet in campaigns) it's rare for a sea skirmish to pass without at least one exciting gunwale-grazing boat chase. 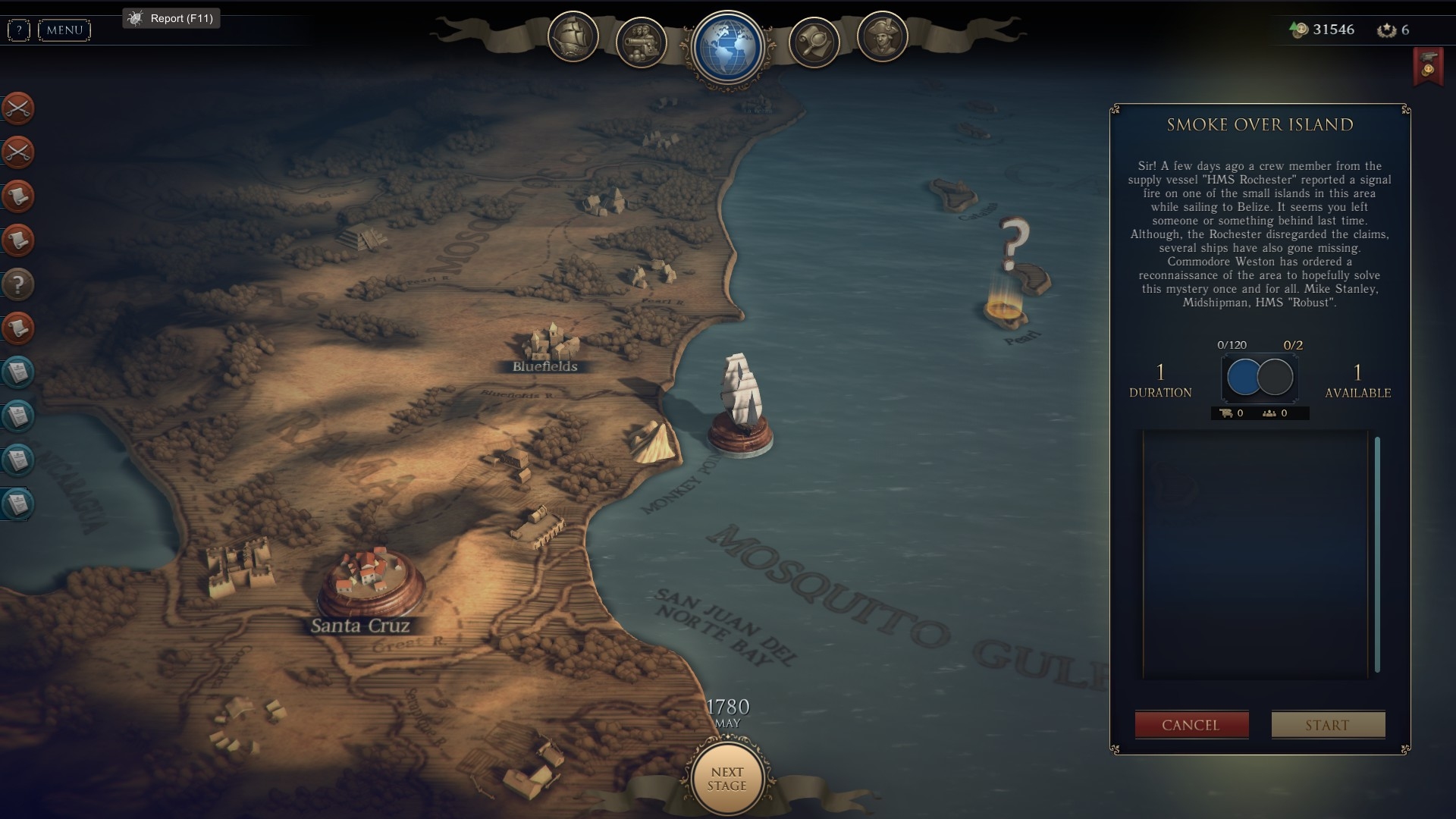 Given my preference for the game's salty side and deep-rooted suspicion of linear campaigns, you'll understand why I'm hoping promised story mode spectaculars like Trafalgar and Cape St Vincent eventually find their way into the single battle folder, and that UA:AOS gains a well-equipped skirmish generator before its nine-month Early Access phase comes to an end at Christmas. 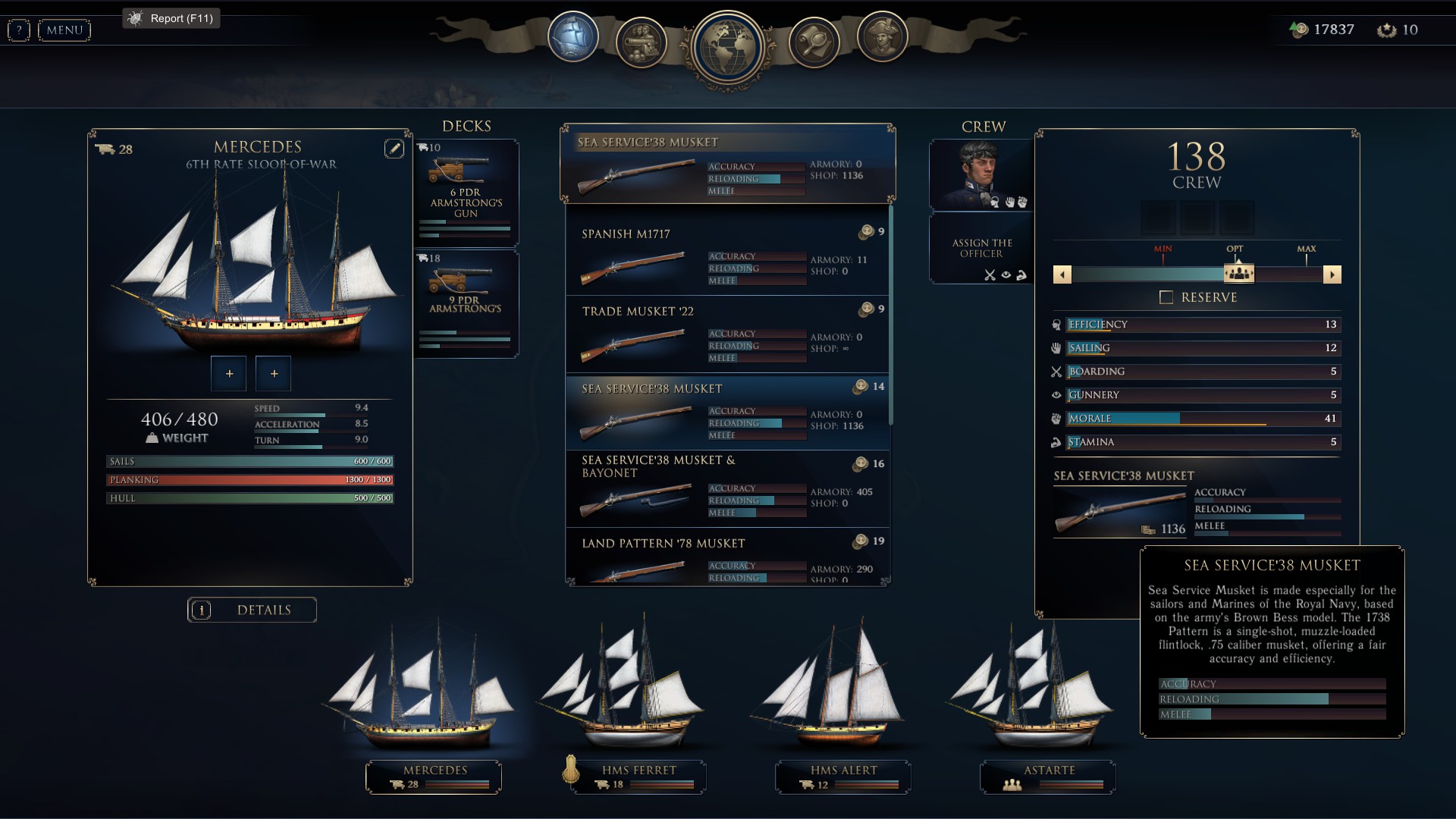 The two campaigns are basically mission sequences, albeit mission sequences complicated by lots of weapon purchasing, crew management, and character-focused R&D. Assuming 'easy' really does mean easy, and I can put aside my land warfare hang-ups, and my profound disappointment at the lack of prehistoric apex predators, my next Ultimate Admiral: Age of Sail article will be an account of Horatio Bornrower's journey from snotty-nosed snotty to column-worthy, national hero. If you'd like to feature in said account (I believe officers are nameable) then please submit an application in the usual manner. 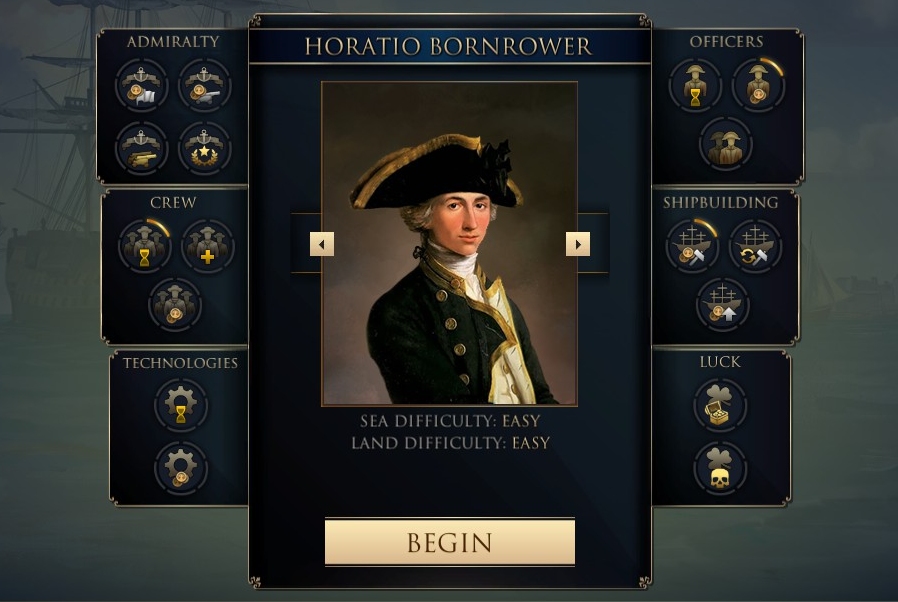