In all but one of the 32 airliner shootdown incidents listed on Wikipedia, the culprits have either owned up or been convincingly identified by subsequent investigations. Only in the case of Itavia Flight 870 does a shootdown remain veiled in mystery. Progetto Ustica, a free title from RIOT producer Ivan Venturi and games academic Mauro Salvador, sets out to remind and remember rather than lift that veil. 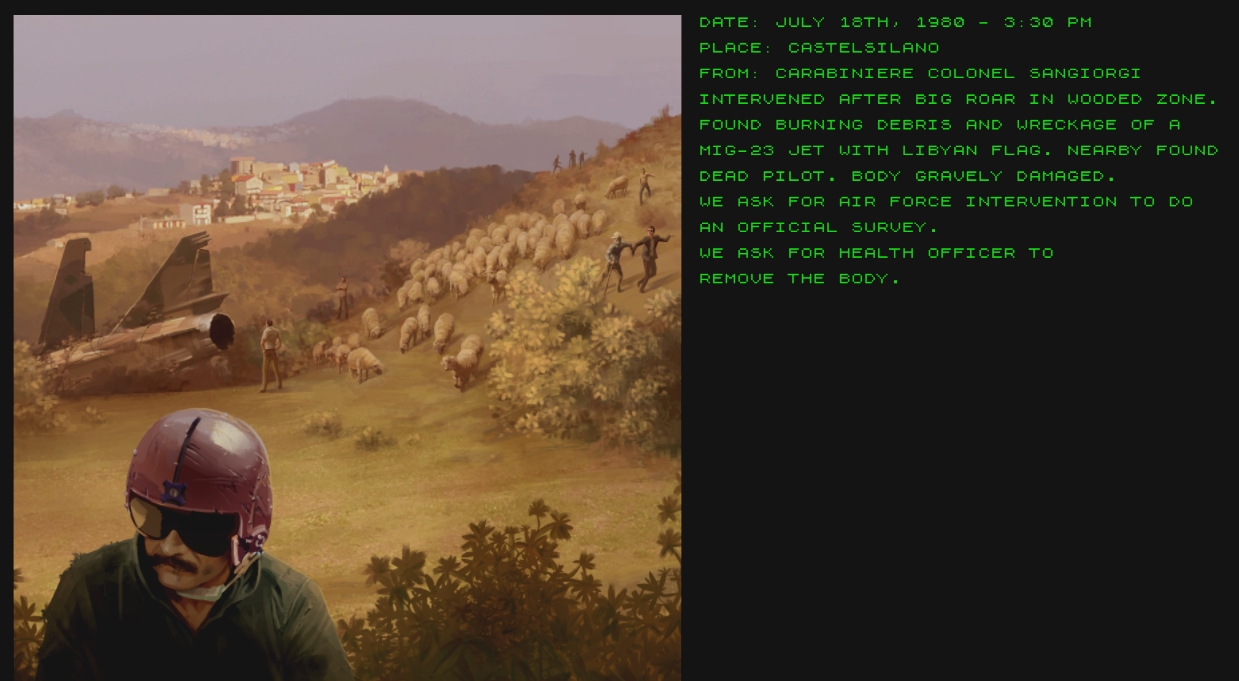 Using a rather confusing first-person clue finding mini-game in combination with high-quality illustrations and tantalising text fragments, the devs share evidence related to the DC-9 that, late on 27 June 1980, plunged into the Tyrrhenian Sea with 81 passengers and crew aboard. 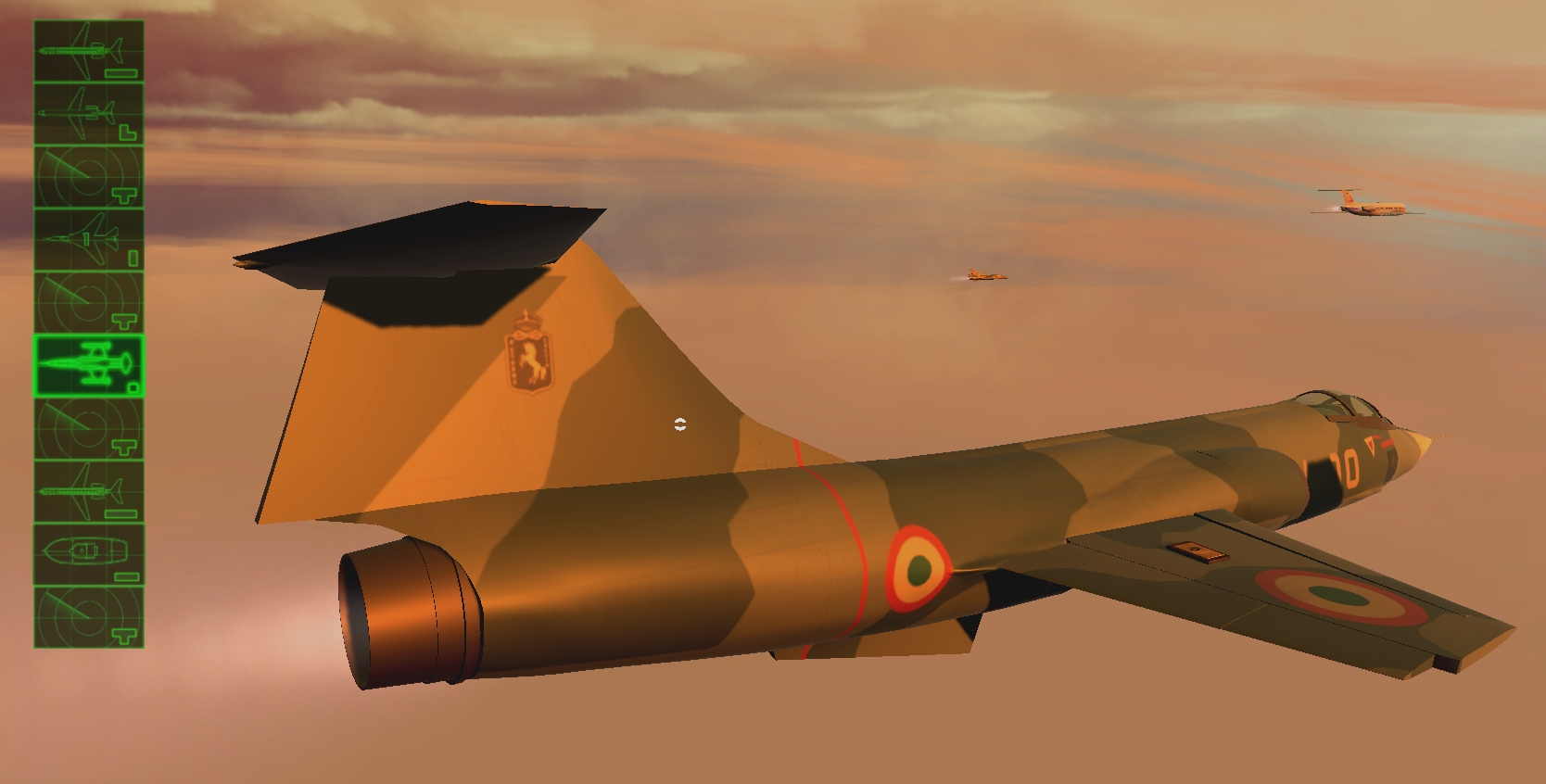 The fractured story delivered during the fifteen minutes the game takes to run its course, suggests Ivan and Mauro are in the 'missile strike' rather than the 'bomb blast' camp, but anyone expecting hard conclusions will leave disappointed. 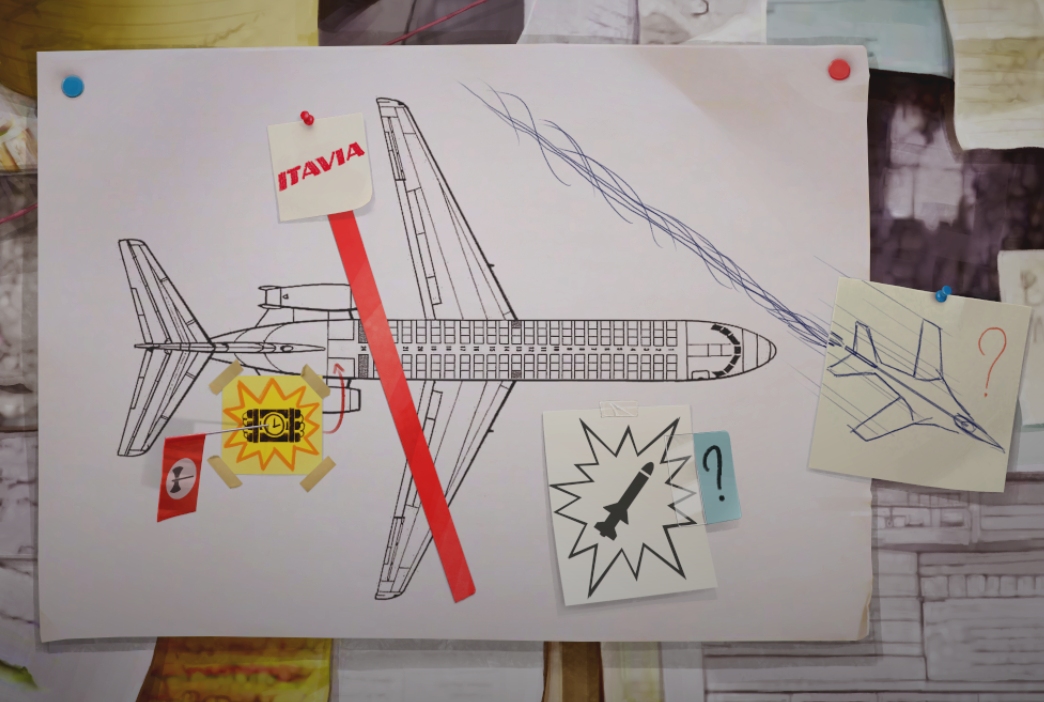 As an audio-visual experience and curiosity piquer, Progetto Ustica works well enough. Judged on purely ludological terms, however, it's a bit of a mess. I'm sure it all looked good on paper – the clue hunting, the shifts in vantage point from cabin interior to aircraft exterior to fighter cockpit to radar screen. Sadly, unintuitive controls combined with inadequate instructions and challenging 6DOF camera movement produce bafflement and frustration in equal measure. The game ends up almost as inscrutable as the incident it explores. 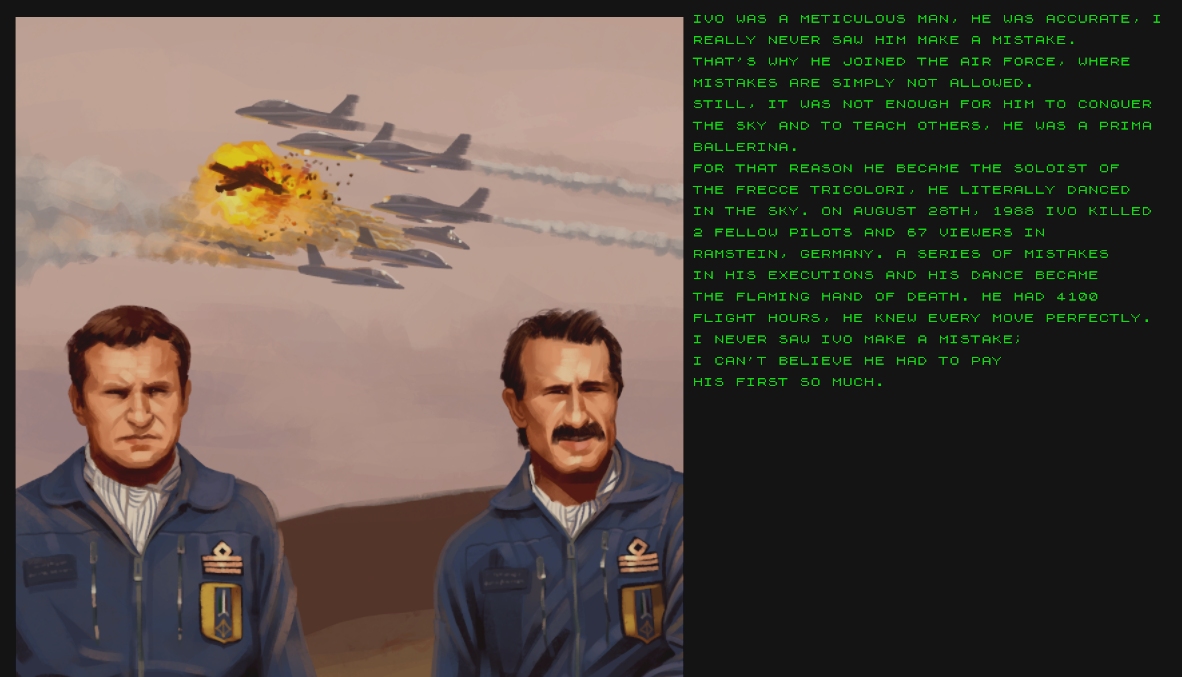 But I'm grateful to Progetto Ustica for pushing me towards unfamiliar Wikipedia pages and for leaving the following question hanging in my skullspace:

Why have I never played a serious air or rail accident investigation sim?

Assuming the simmed incident was fictional or suitably ancient and obscure, I reckon I could inspect and analyse with an easy conscience. Assembling the right team... roaming a clue-littered crash site... interviewing witnesses... dealing with political pressure and media curiosity... it's not hard to imagine the core activities or the satisfaction that would come from Sherlockian breakthroughs. 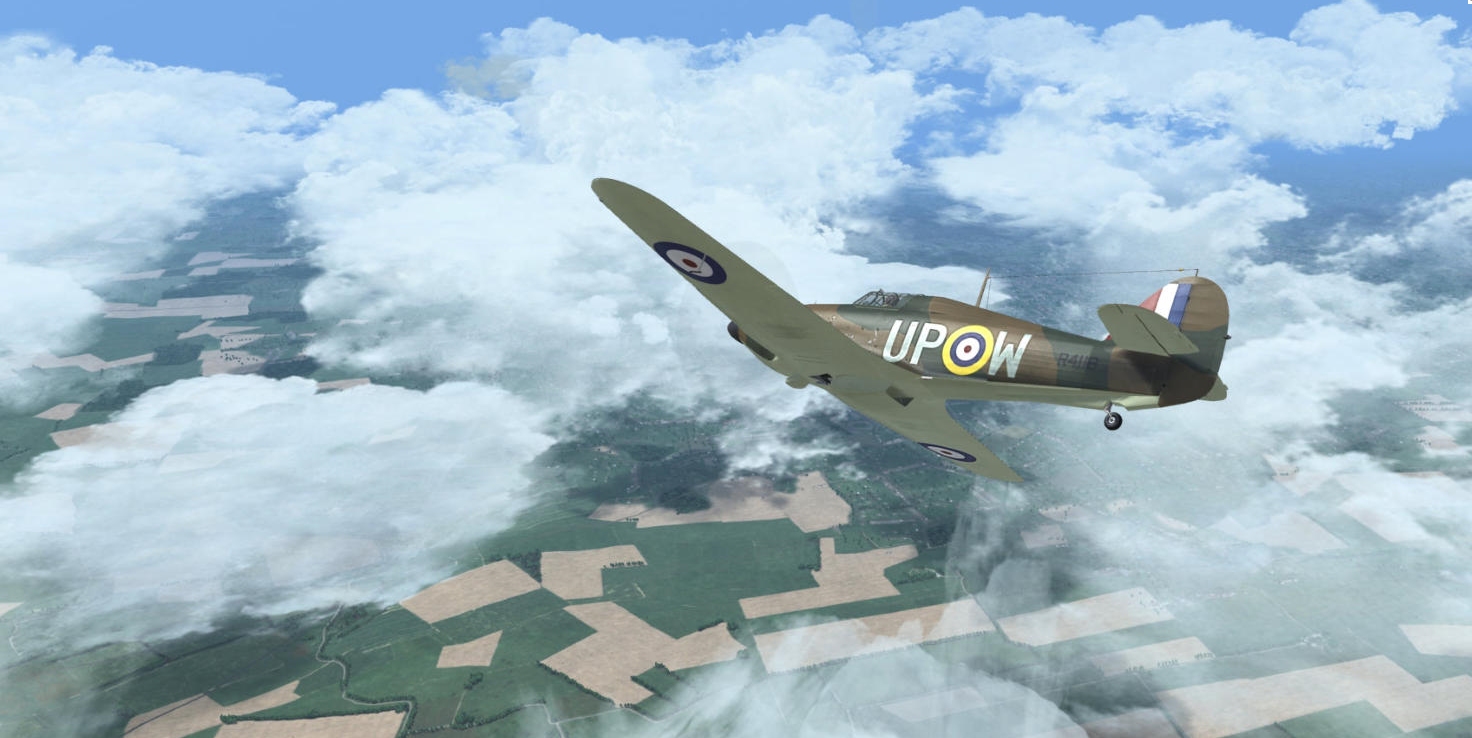 I can't remember a Battle of Britain flight sim ever shipping with just two aircraft in its flyables folder before. The lonely Wings Over the Reich Hurricane and Emil will eventually get company via expansions, but extra aircraft like the coming Spitfire MkIa will require extra outlay. 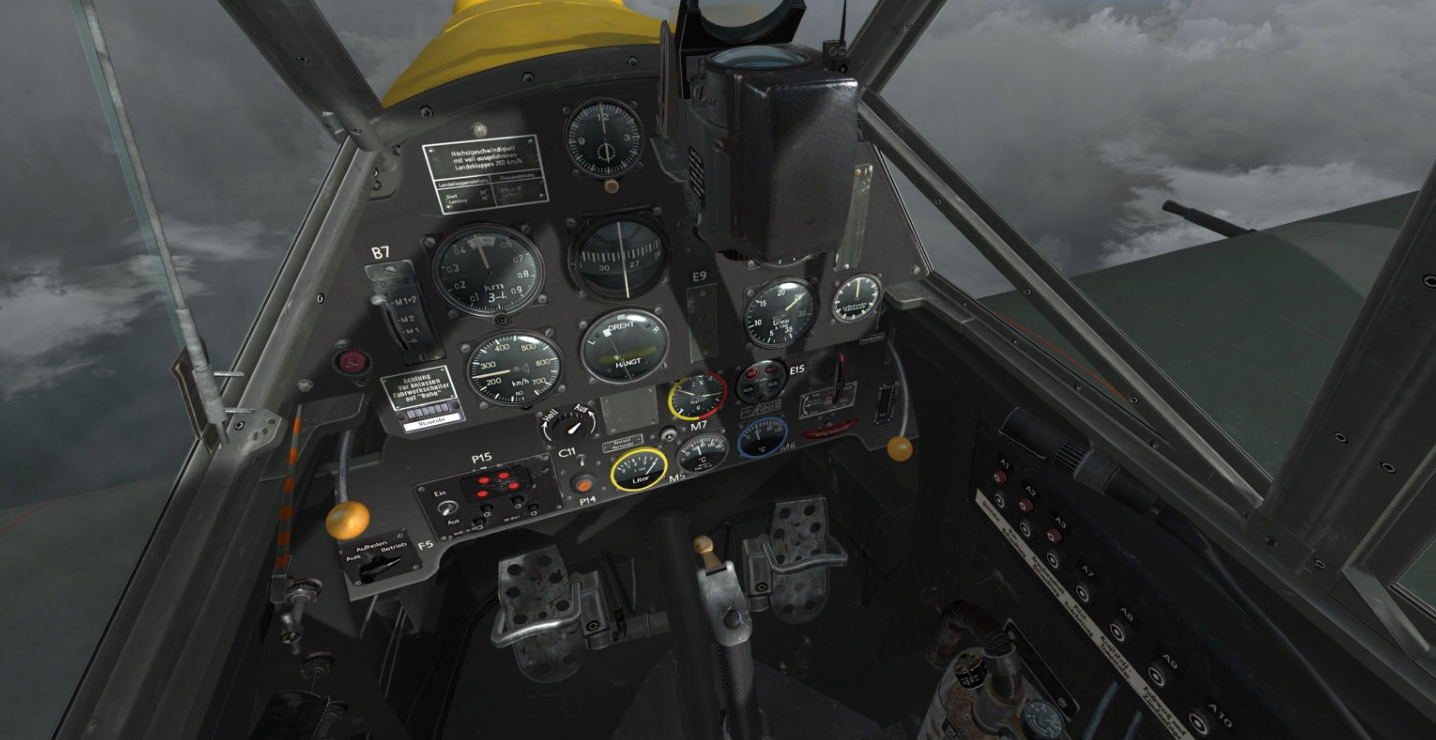 Old Brown Dog is clearly hoping that the richness of the sim's dynamic campaign and the zesty unpredictability of its bandits will keep steed selection complaints at bay for the time being. Having only managed to complete a couple of test flights thus far, I'm not in a position yet to say whether WOTR's long game is as wonderfully immersive as Wings Over Flanders Fields', but a brief glimpse of the scenery surrounding my local aerodrome/Free Flight starting point suggests I won't be doing much VFR navigation when I do finally start campaigning.

I vividly recall one of my first jaunts in Cliffs of Dover - Tiger Mothing across Central Southern England using familiar rivers, roads, railways, and hills as signposts. Attempting a similar ramble in a Wings Over the Reich Hurricane I quickly became disorientated due to the disappointing lack of simmed landmarks.

^ An example. I believe this is meant to be popular winter break destination, Salisbury. Assuming it is, where's the cathedral famous the world over for its 123 metre spire and ancient clock?

Afghanistan 11's first expansion pack is partially responsible for my failure to fully engage with WOTR. Now that I've worked out how to set-up up roadblocks (a new feature that really should have had its own mini tutorial or manual supplement) and remembered that campaign scenarios often require very different tactics from sandbox games, I'm really enjoying Every Single Soldier's £7 adjunct. 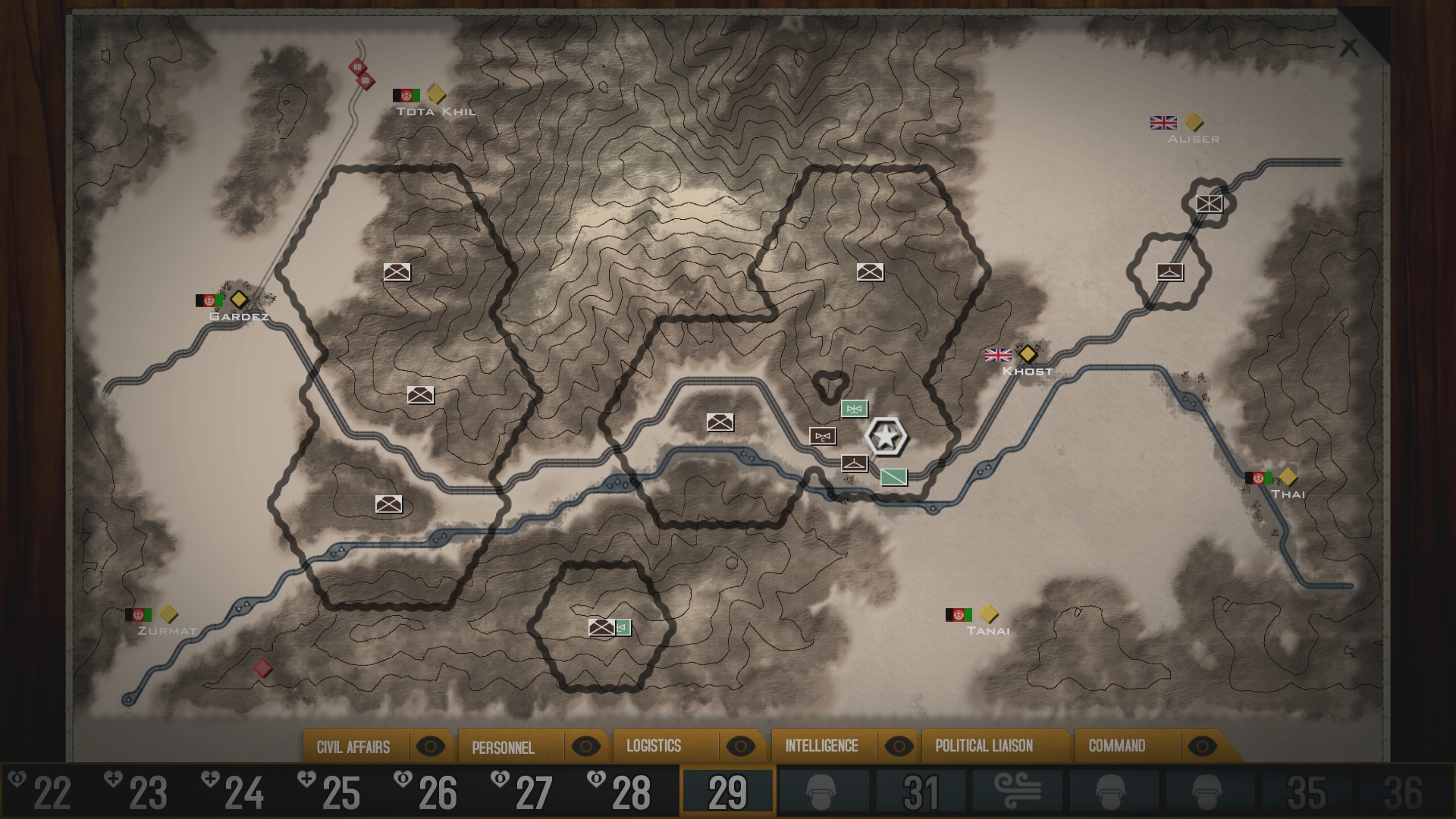 Starting with a challenge inspired by Operation Ptarmigan (2002) and concluding with one based on Operation Ghartse Dagger (2008), the ten-episode British campaign doesn't have to be played chronologically. However you tackle it, varied objectives and custom venues ensure you can't simply import standard random map strategies and expect to triumph. In some scenarios winning Hearts and Minds and planning for Handover is unimportant. What matters is getting your SAS teams up into the mountains ASAP, tasking drones sensibly, and then locating and liquidating Taliban fighters with alacrity. 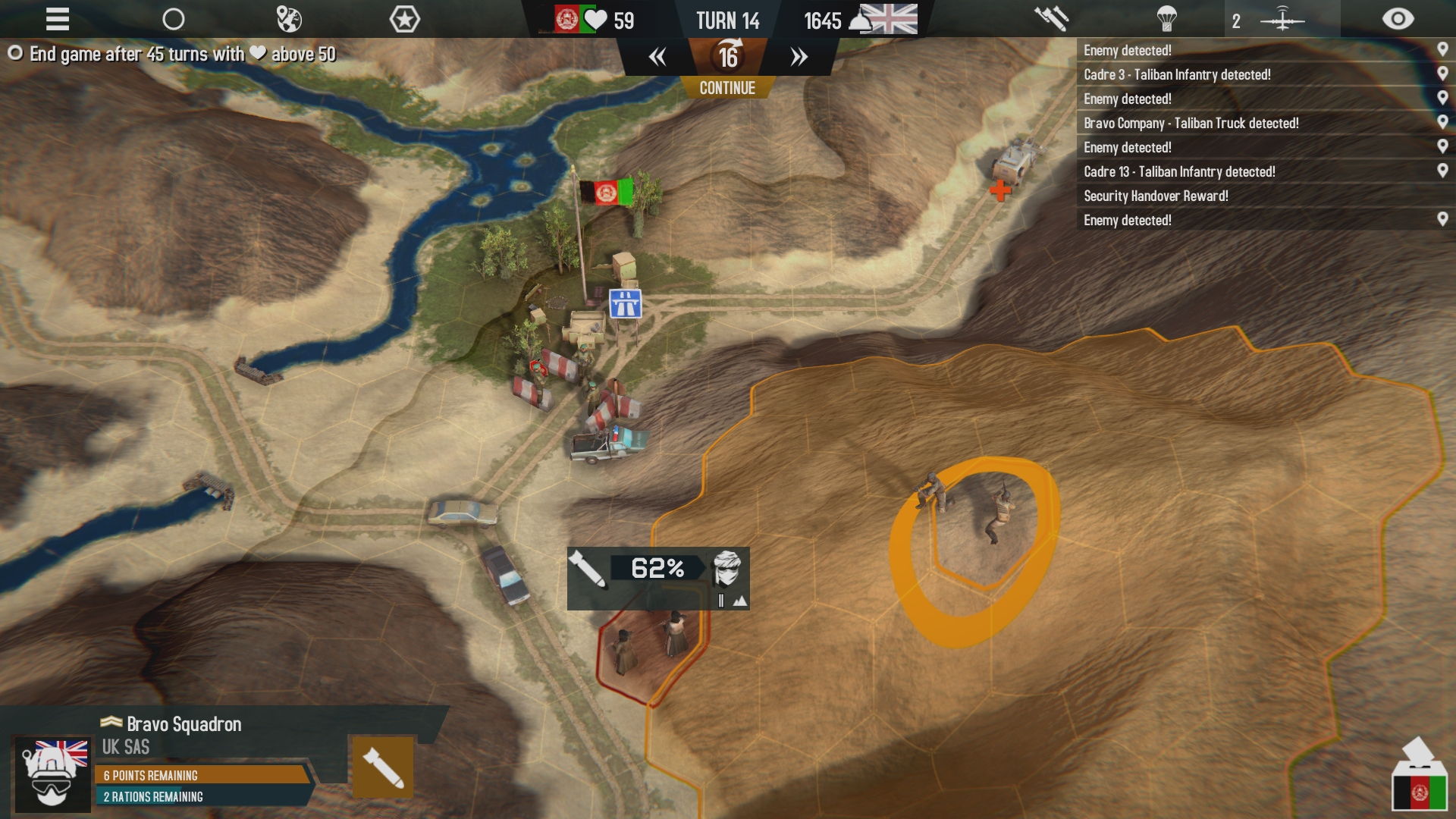 Cars and car bombs add extra tactical texture to a game that wasn't exactly short of it in the first place. The dilemma at the heart of A11 - troop safety versus troop visibility (a force that huddles in its base and relies on helicopters to move around stays relatively safe but doesn't inspire much local confidence) - is intensified by Royal Marines' exploding automobiles. Randomly generated and indistinguishable from the other civilian vehicles that scurry from village to village, the car bombs detonate on reaching their destinations knocking local H&M for six. The only way to stop them is by setting up roadblocks which require either a Marines infantry unit mounted in a Jackal, or an ANA unit in a police pick-up. As roadblock teams need to be supplied and, at times, protected, they're another strain on your stretched resources... another plate to spin and then spin again. 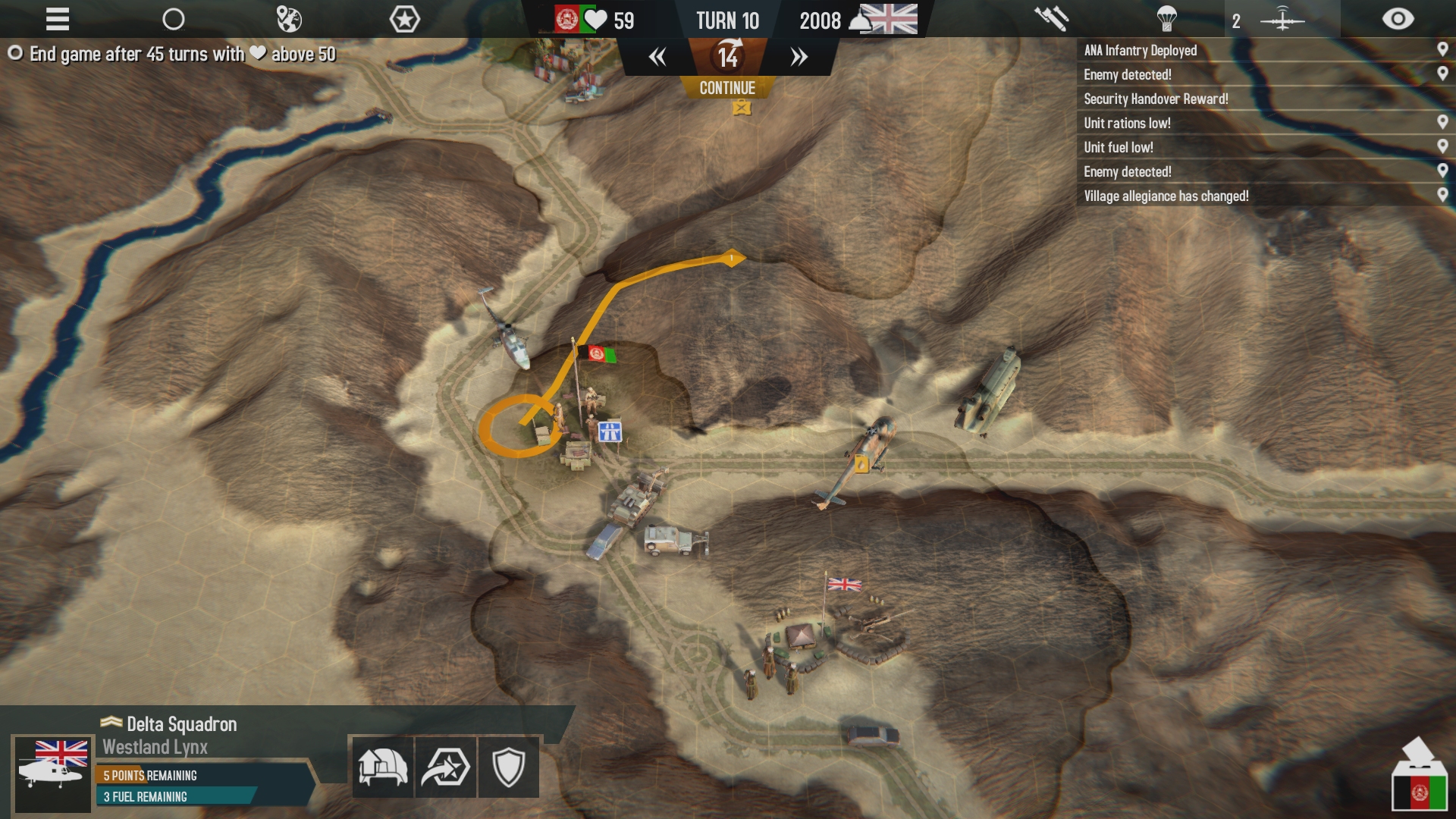 Other smaller tweaks like FOB crowding penalties and unpredictable village intel (villages no longer generate gen opportunities at fixed intervals) feel like sage finishing touches rather than overdue fixes. If it wasn't for the rare crashes that still blight play now and again (fortunately, autosaves mean you never lose significant progress) it would be tempting to say that Afghanistan '11 is now complete. As it stands, Johan Nagel and Co. still have some patching to do before they can move onto Angola '86 without backward glances. 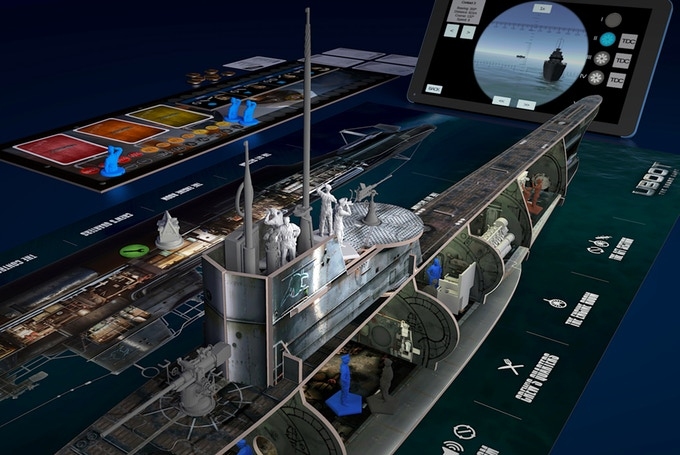 When I was a nipper, cardboard wargames inspired digital ones, not the other way around. Any dev that backslid as enthusiastically as Deep Water Studio or Every Single Soldier would have been lashed to a waterwheel for a day or two or made to undergo Trial by Ferrets. 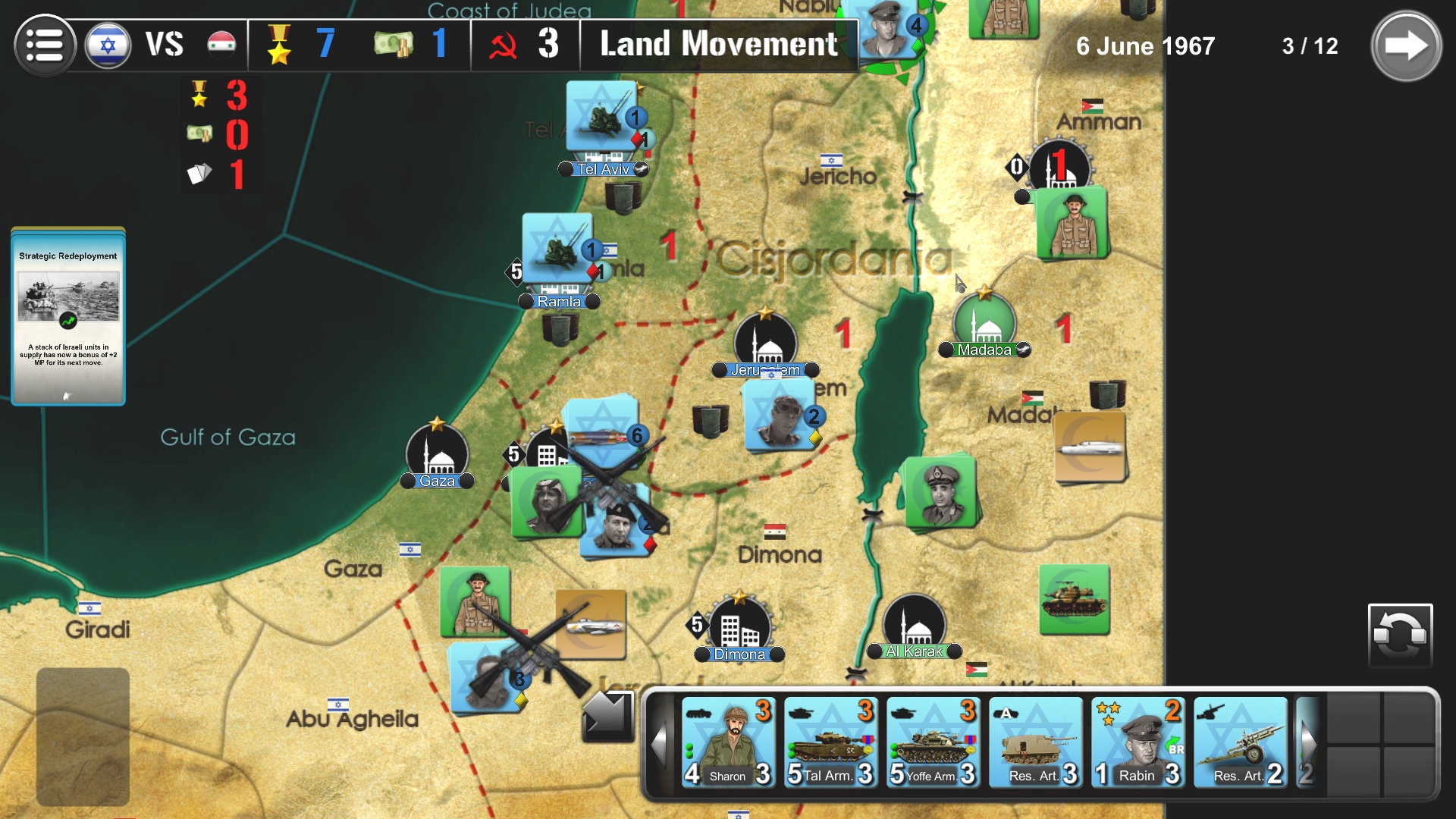 I daren't think what would have happened to Strategiae. The outfit behind the military magic porridge pot that is Wars Across the World have recently announced a partnership with Aleph, unapologetic disciples of The Old Way. By Christmas, assuming modest pre-order thresholds are reached, four WATW titles will be available in tabletop form. 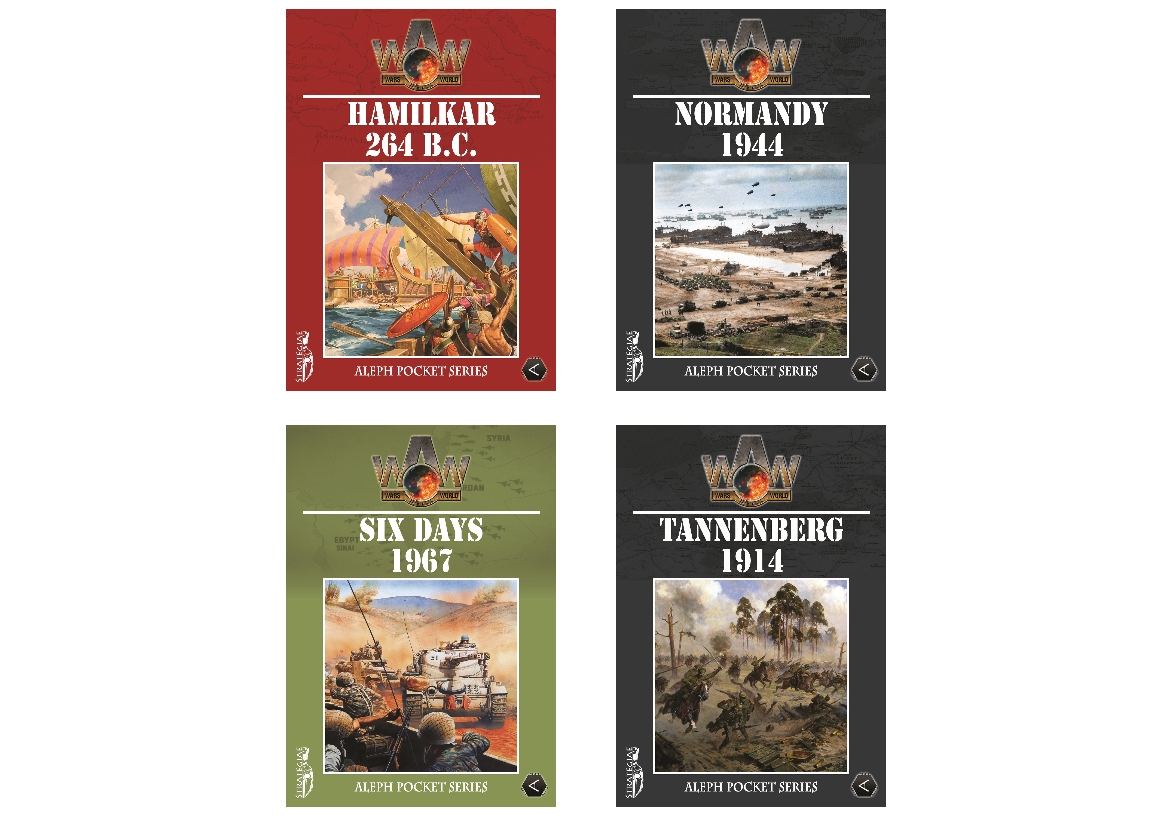 Not unattractively priced, each game will come with 108 mislayable counters, 36 droppable cards, and a flammable A3 map not to mention a 20-page rulebook that will eye you like a dying flounder until you pluck up the courage to peruse it.