Unwilling to stray far, thematically speaking, from my current plaything of choice, Strategic Command: World War I, my time away from hexagons this week has been spent sampling potentially complementary Great War fare. In search of the cranberry sauce for SCWWI's Ottoman Empire, the mustard for its BEF, I've consumed a new flight sim with major deficiencies, two dirt cheap wargame DLCs that ultimately disappointed, and a mechanical puzzle game that could, had it taken a different path, have proved quite the time machine. 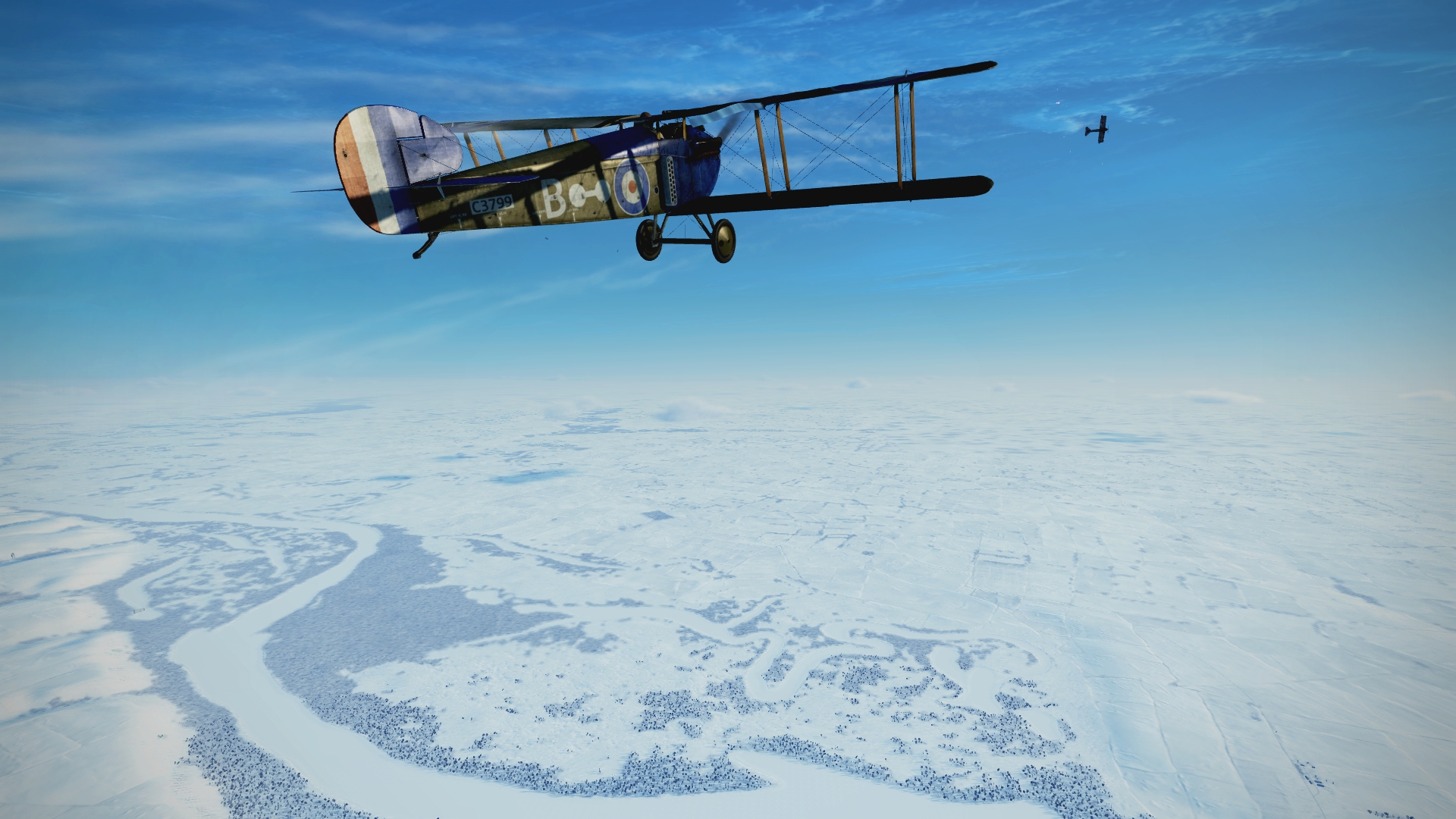 The aphorism “You get what you pay for” might work with underwear, blended whisky, and climbing ropes, but anyone applying it to PC games is asking to get fleeced. Wearing a £65 Steam price tag the way a prize-winning Hereford bull wears a Smithfield best of breed rosette, Flying Circus – Volume 1 radiates quality and comprehensiveness. 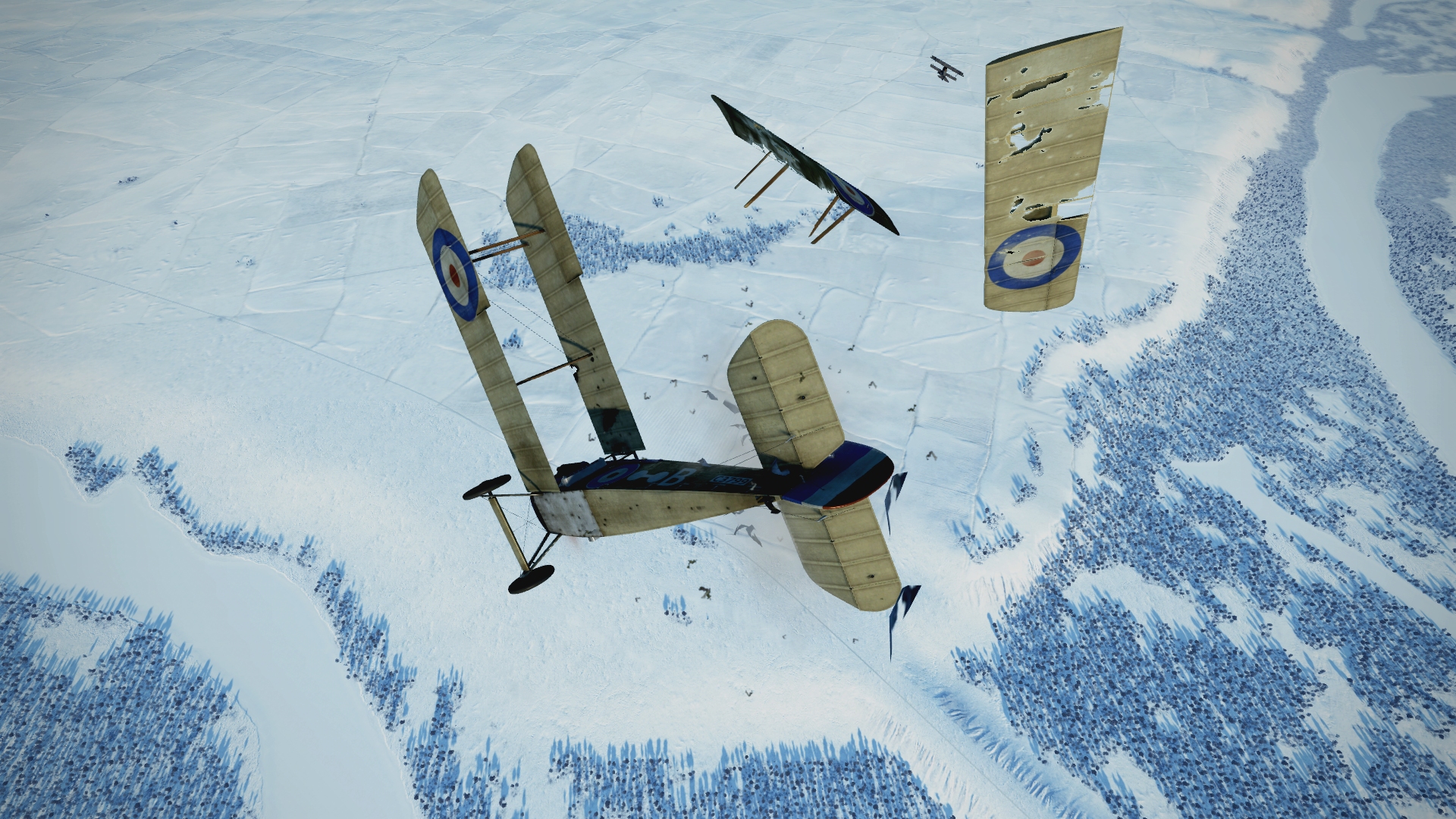 The reality is less impressive. In scope at least, this comely IL-2: Sturmovik: Stalingrad expansion doesn't feel like a sixty-five nicker game. 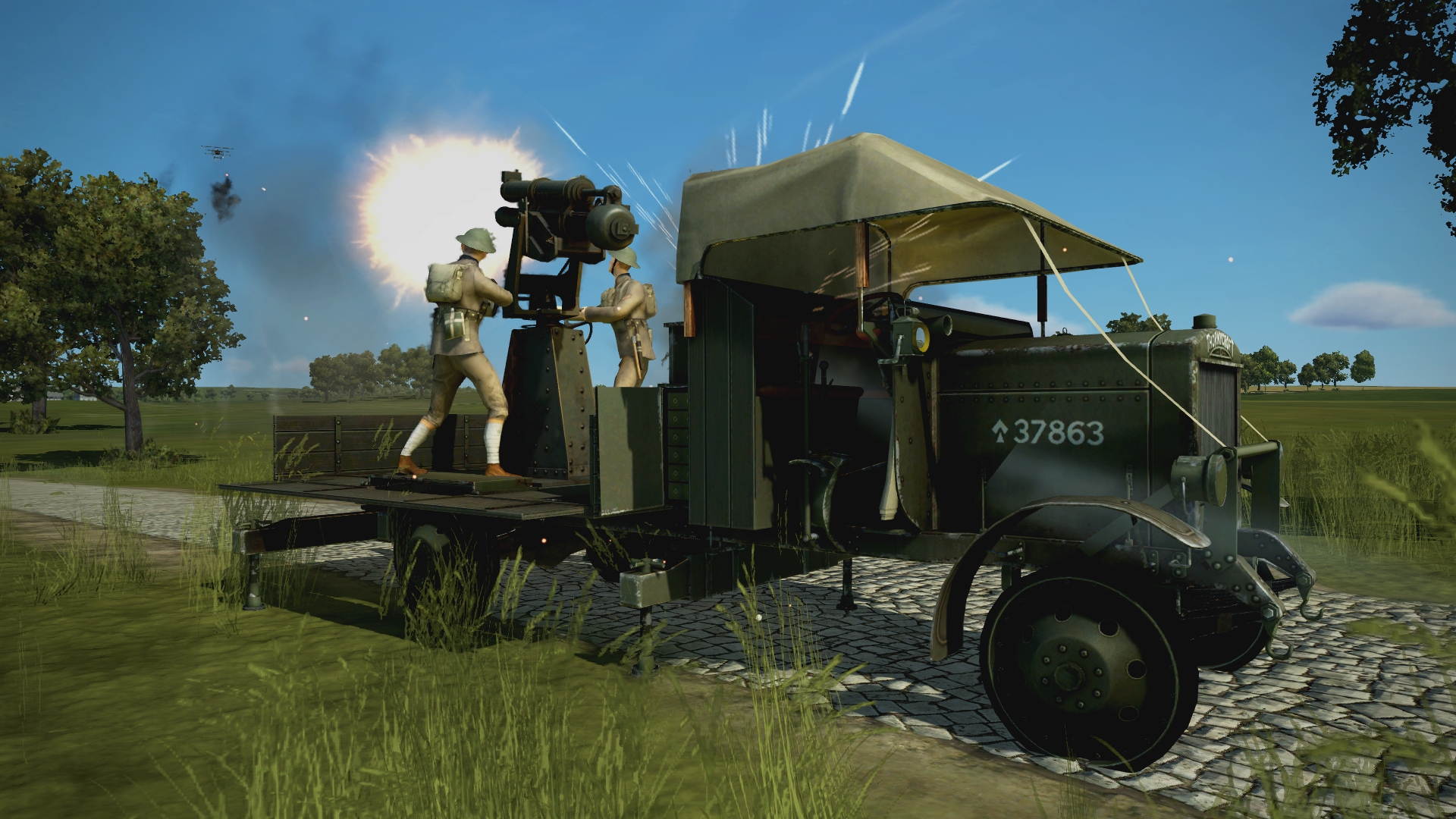 “From the team that brought you Rise of Flight: The First Great Air War comes a new, re-imagined Great War combat flight-simulator”

“Dogfight to the death against cunning enemies and see if you have what it takes to become an ACE!”

“Discover the bravery and courage it took to do battle where each mission could be your last. Are you the next Guynemer, Ball, Bishop or von Richthofen?” 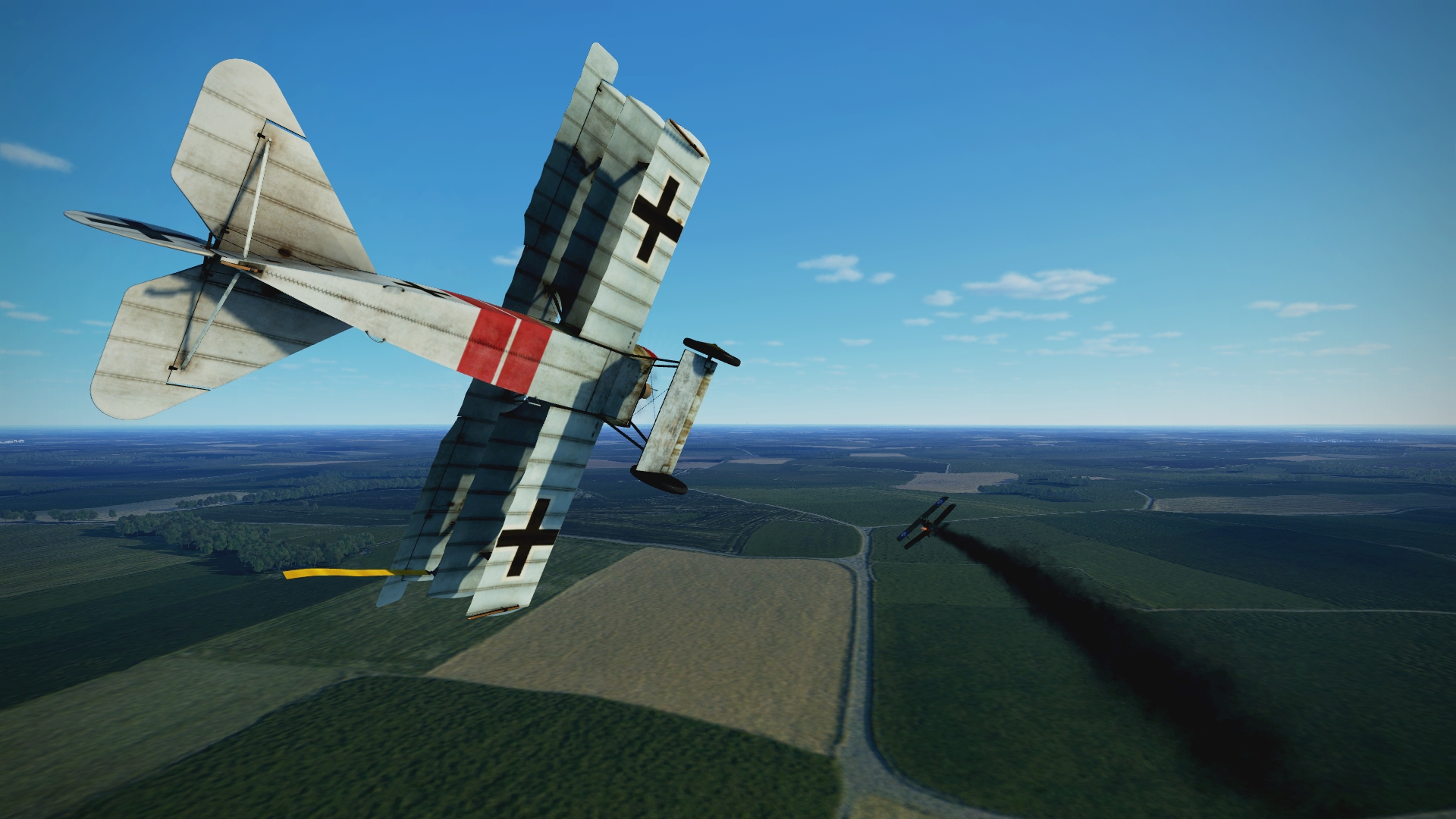 ...Flying Circus is actually far from rounded. Currently devoid of single scenarios or a campaign, and relatively short of period maps (there's just one, centred on Arras), it feels distinctly Early Access right now. Once you tire of test-flying the ten included aerodynes in skirmish and multiplayer modes, there is almost nowhere left to go. 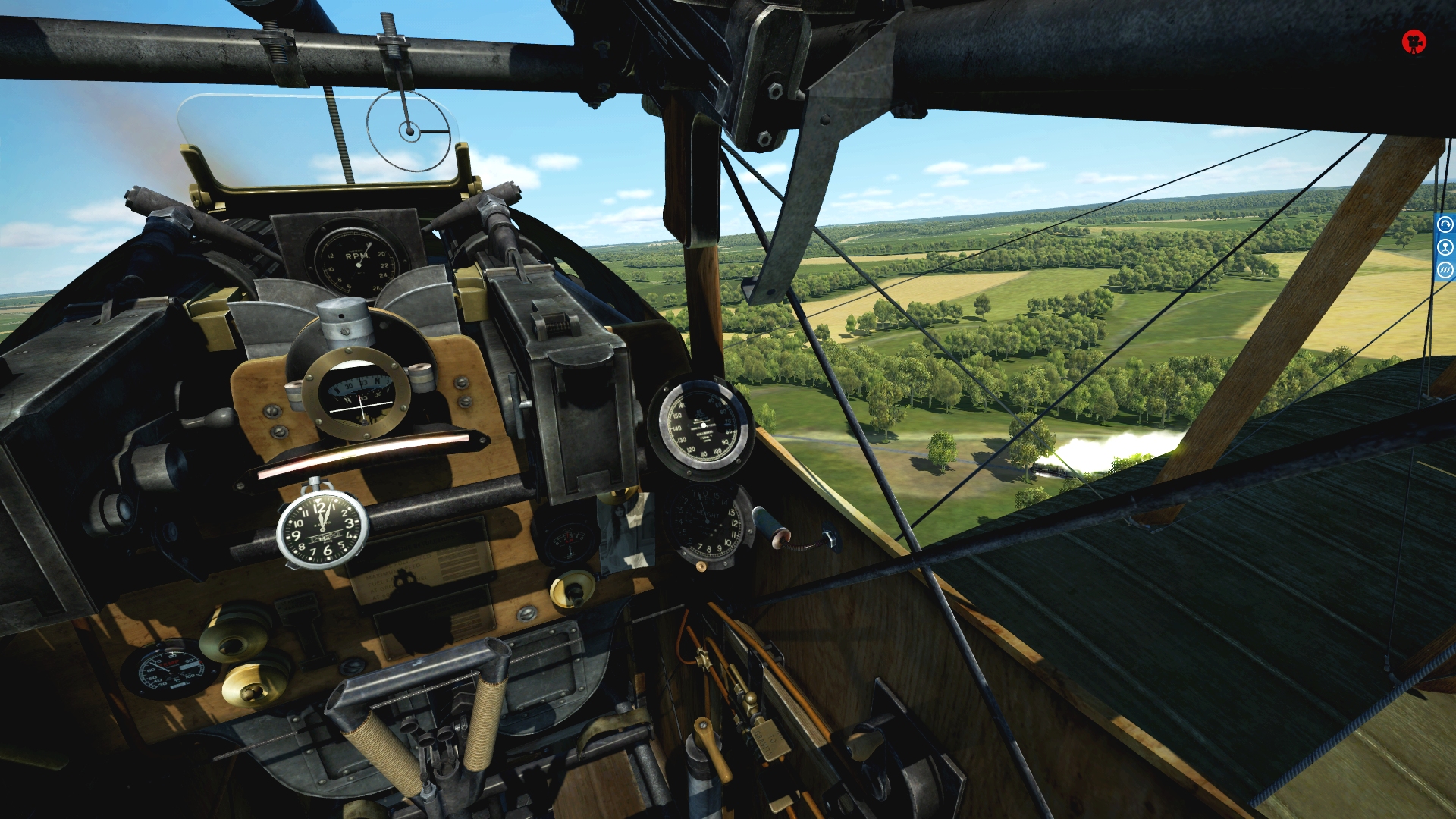 As lovingly modelled as those aircraft types are, and as enjoyable as it is to tank-tease... 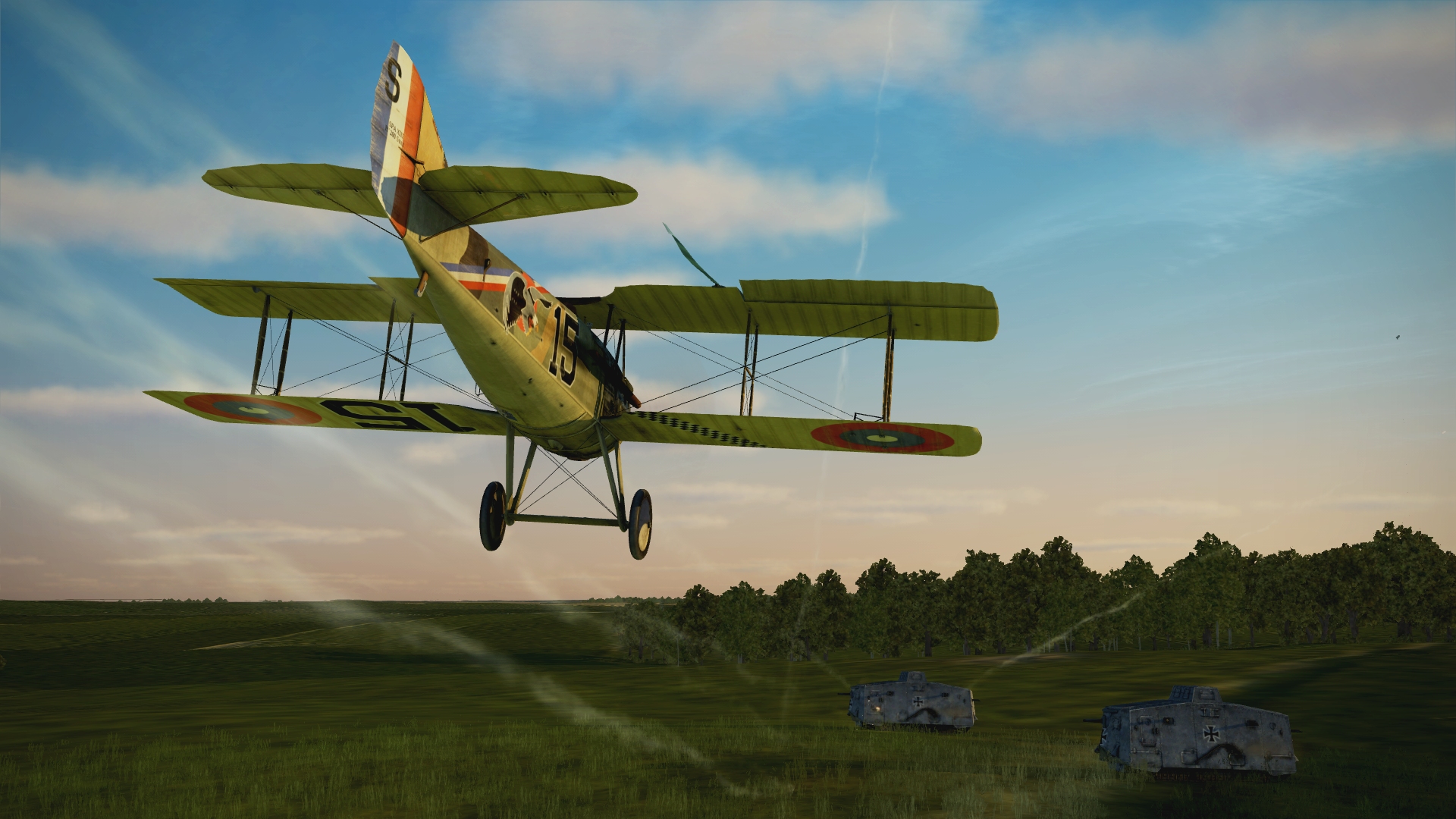 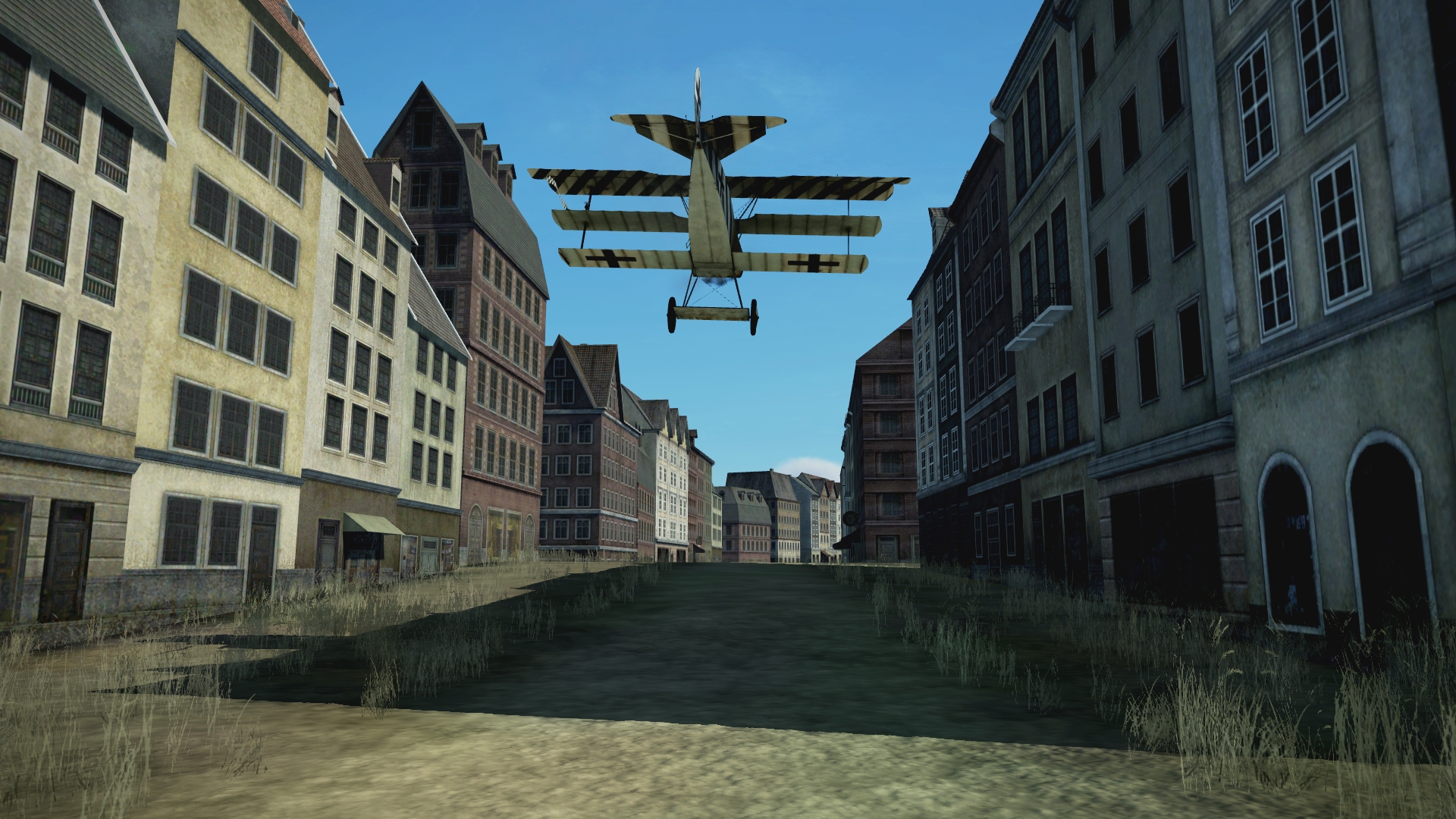 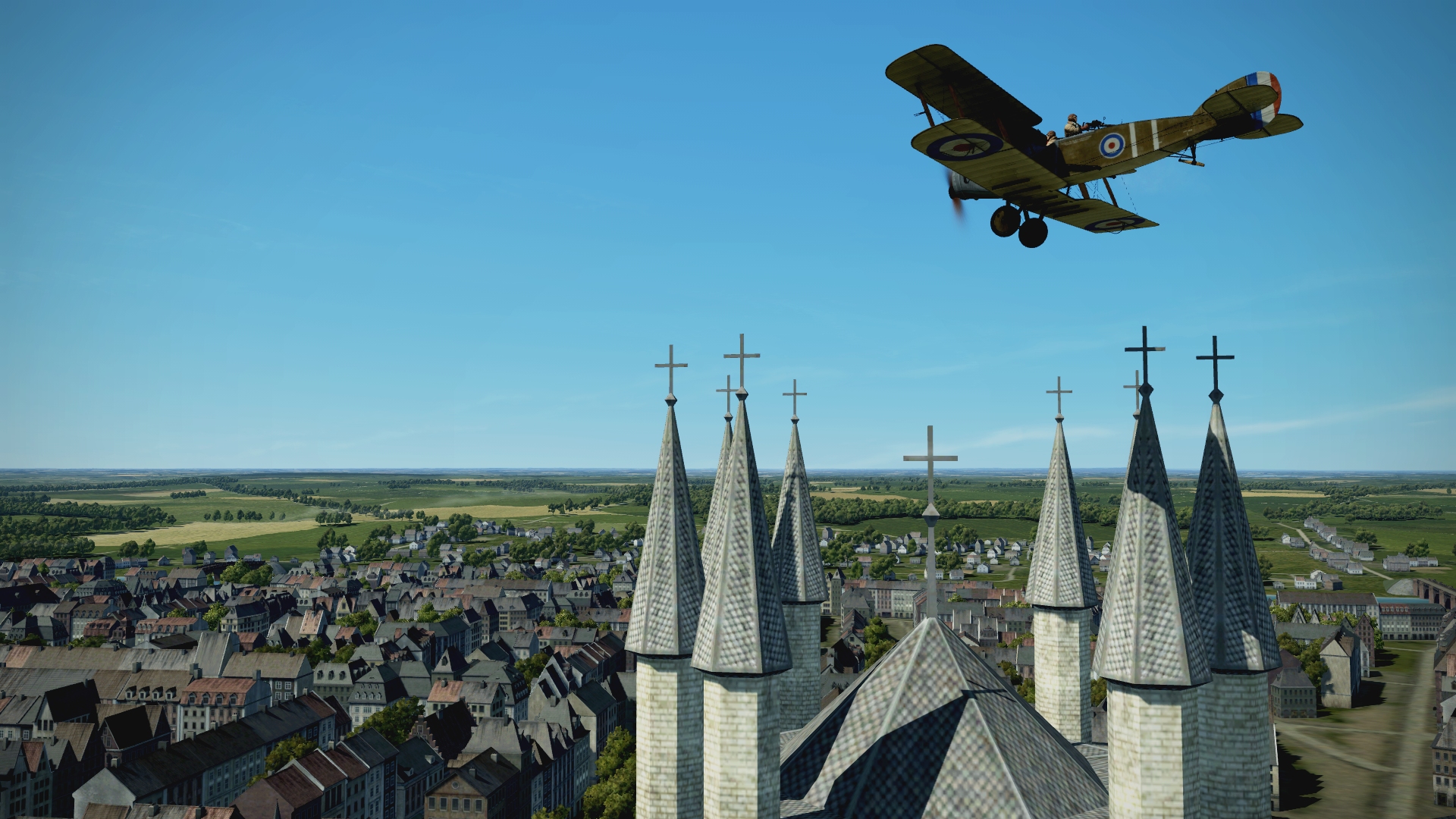 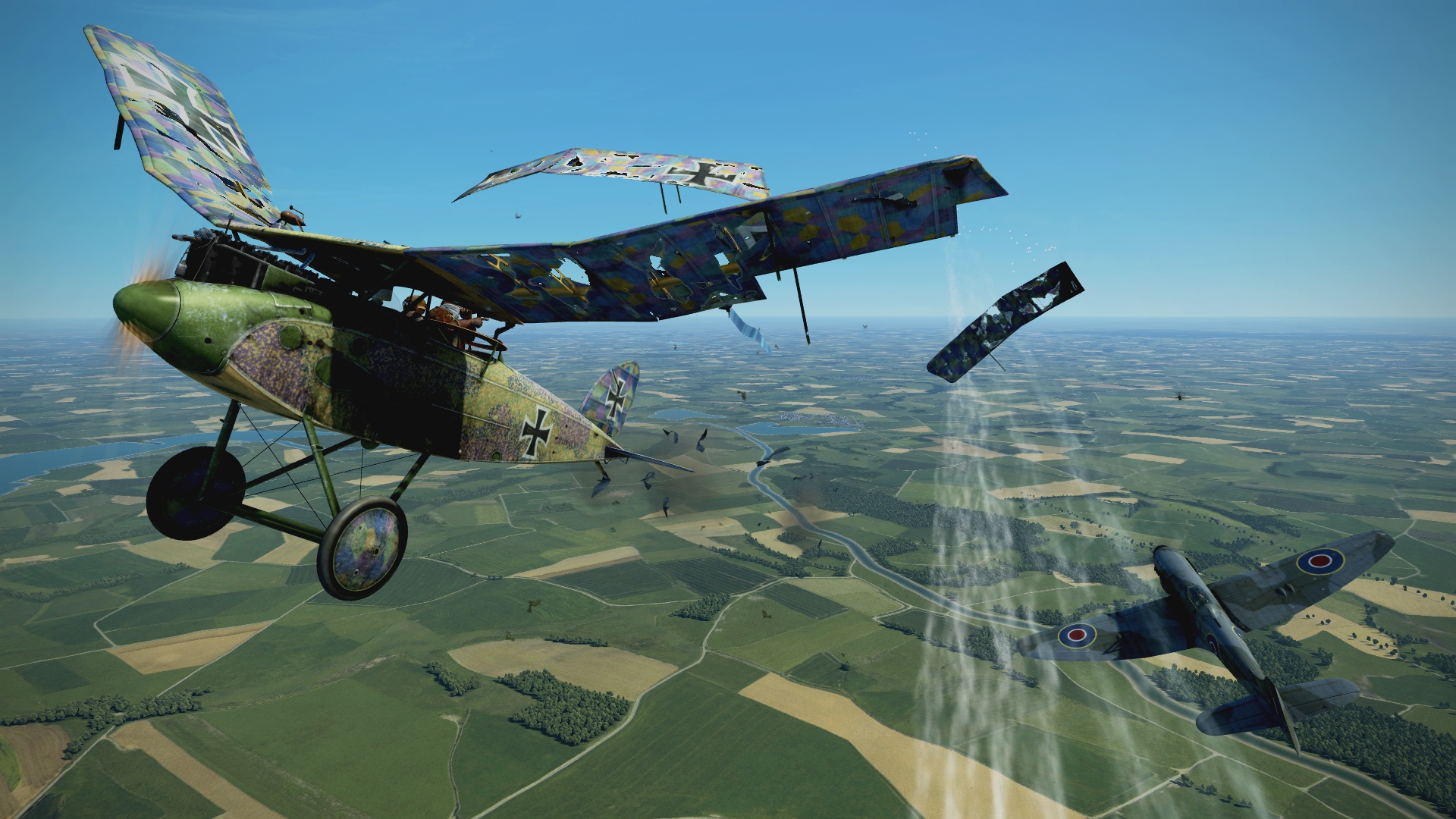 ...it's hardly surprising that some punters are grumbling. Even bolstered by Pat Wilson's Campaign Generator, a third-party career engine of high repute, the scrawny fledgling is a sorry campaigner compared to Wings Over Flanders Fields and Rise of Flight.

To produce sequences of plausible, interesting sorties, Pat's campaign engine needs access to large, cosmopolitan hangars - something the fighter-dominated, late-war FC conspicuously lacks at present. With only one two-seater per side, no large bombers at all, and no infantry representations, the potential for engaging escort, recon, and ground attack jaunts is seriously limited. 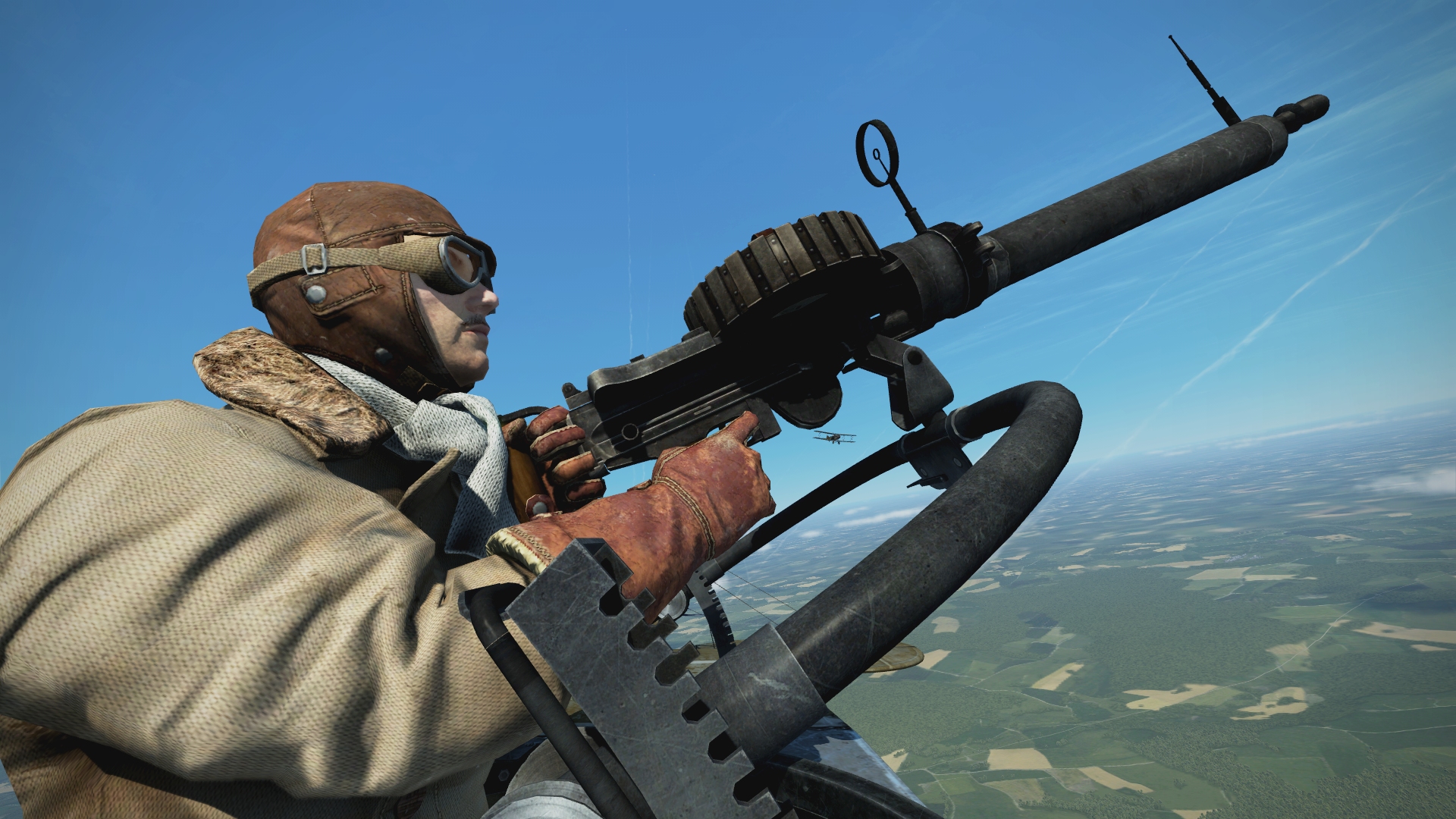 I've started both a Fokker Dr. I and a Brisfit campaign and suspect I may not finish either. The views from the cockpit are splendid, the bandits a little feistier than I expected, but the operational variety and incidental detail necessary to keep me interested simply isn't there. Outside of patrol/target areas, the game's Western Front is a lifeless wasteland. Ambling from deserted aerodrome to distant objective bubble and back, there's plenty of time to consider Flying Circus' inexplicable shortcomings - plenty of time to reflect on the superior WWI flight sims I could be playing instead. 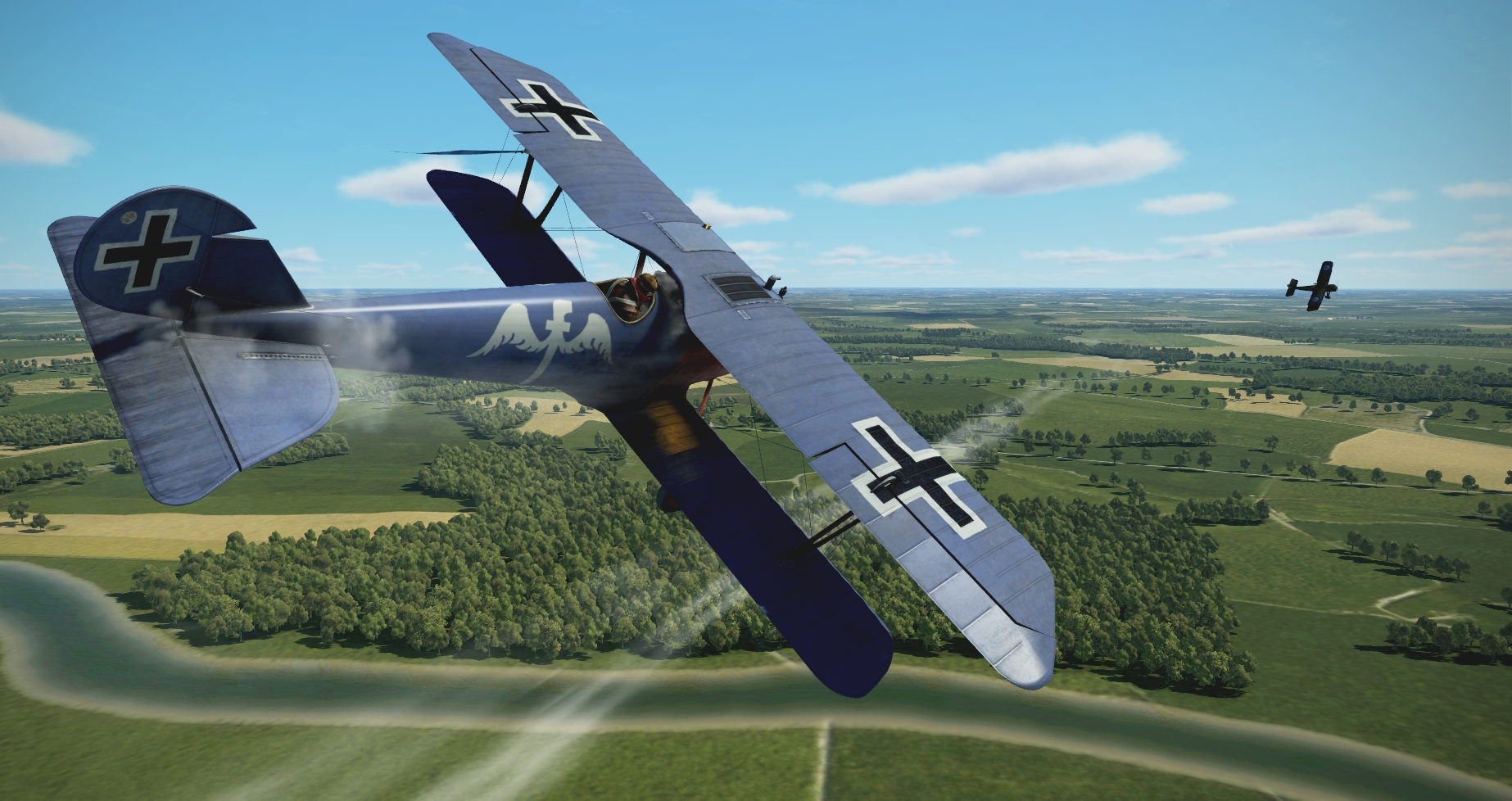 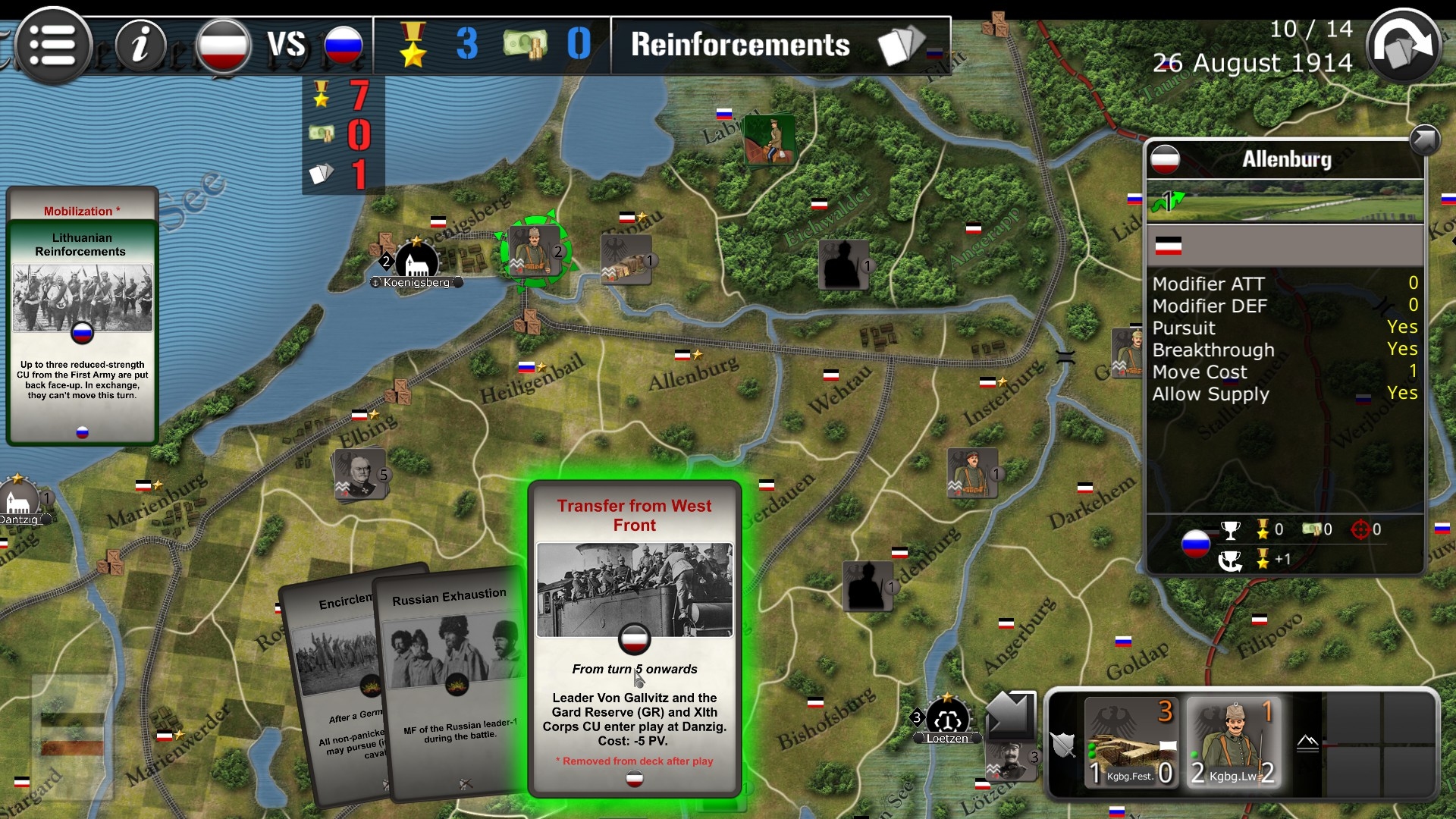 Regular readers of this column will be aware of my  like-exasperation relationship with Wars Across the World. The idea of a friendly turnbased wargame supple enough to conjure up any conflict, regularly supplemented by cheap unusually-themed DLC, still excites me, even if the reality often disappoints. Until this week I'd not tried the game's WWI offerings - Tannenberg 1914 and Serbia 1914. 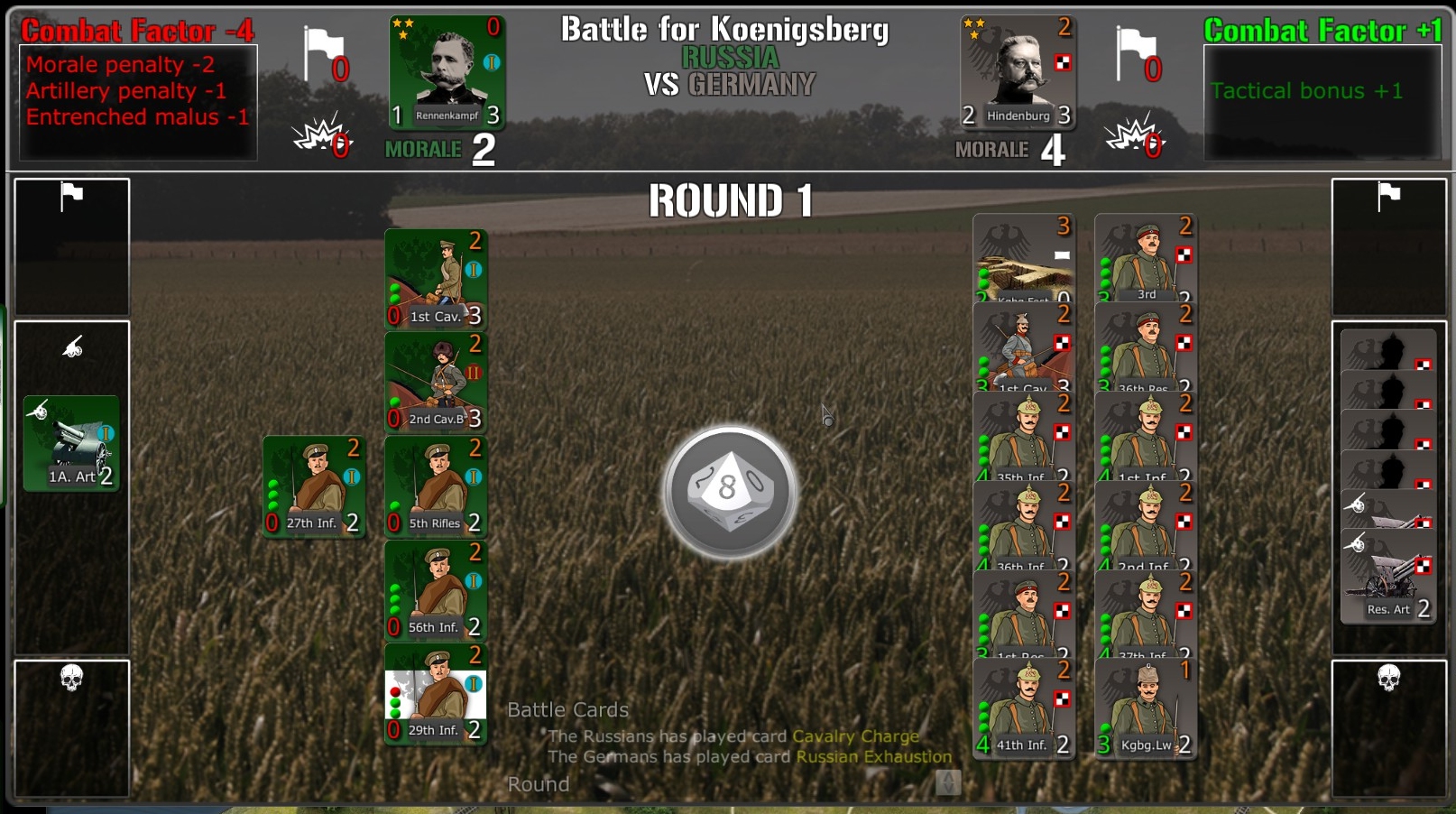 As its title indicates, the former release professes to sim the most dramatic German success of the conflict, the against-the-odds destruction of Russia's Second Army in East Prussia in the opening month of the war. Rapid rail-aided redeployments allowed the outnumbered but brilliantly commanded Germans to shatter the southern tine of a two-pronged Russian advance before turning to face the eastern one. 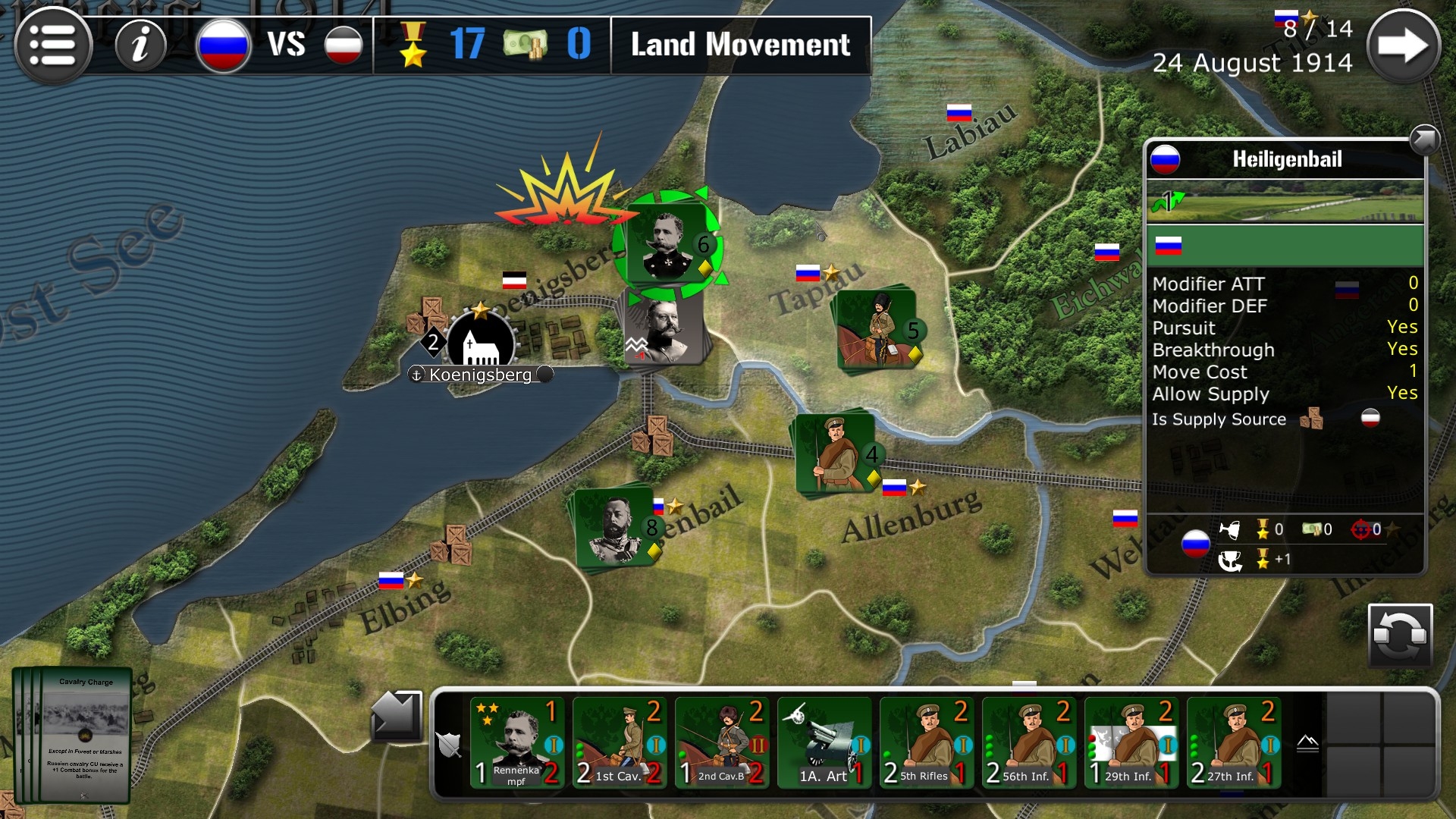 The history-crammed bespoke card deck, mass of named units and leaders, and essentially sound core rules do their best to keep things plausible, but ultimately, like far too many WatW scenarios, the 14-turn Tannenberg 1914 is undermined by a slow-witted AI and a dubious approach to difficulty settings. 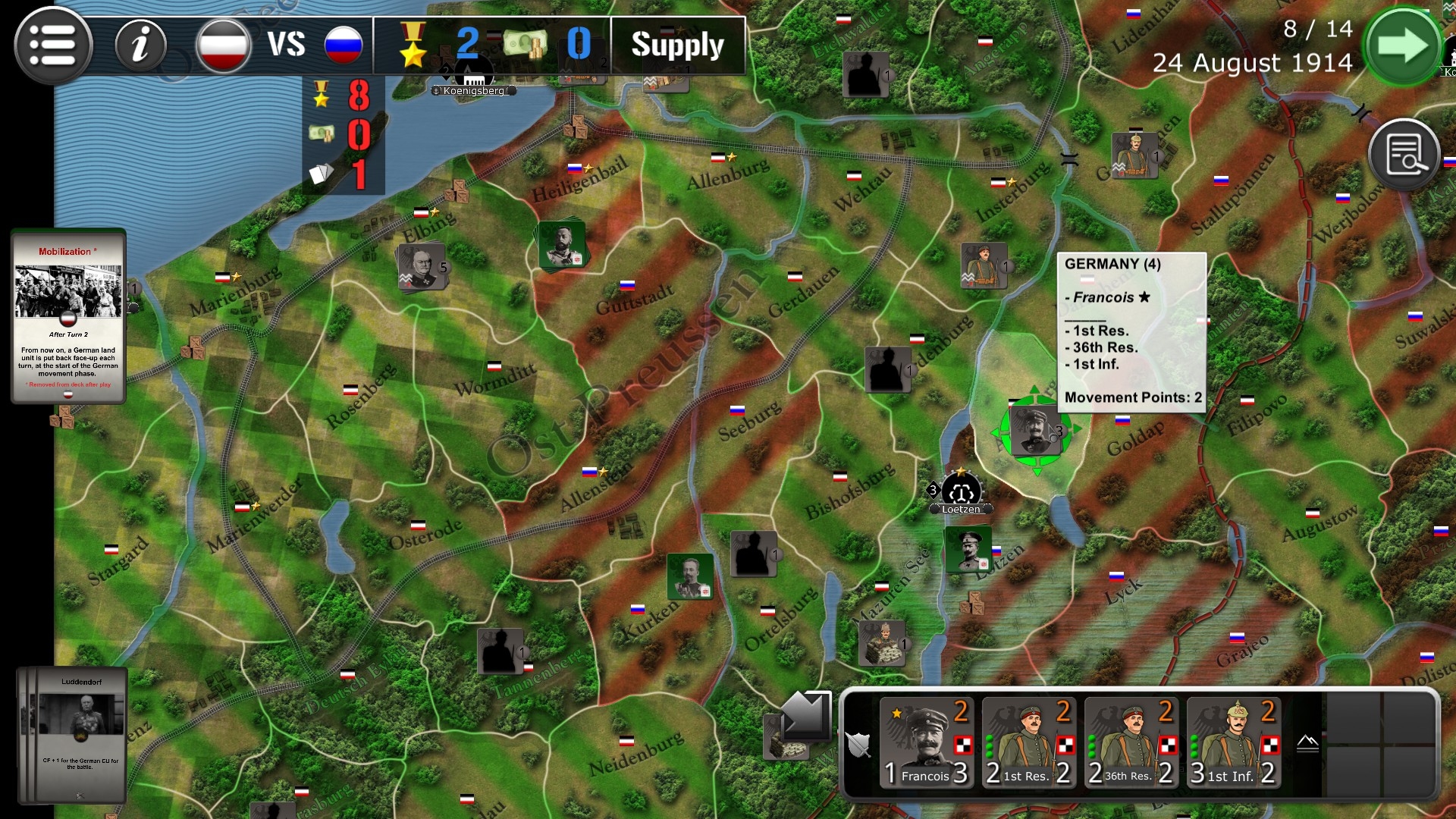 A cheeky cavalry advance here, some stubborn trench turtling there, and suddenly the computer's most formidable counter stacks are cut off from their supply sources and struggling. Asked to defend, the CPU demonstrates little of Hindenburg's, Ludendorff's, and Hoffmann's dynamism and insight. In attack it ploughs towards objectives on the Baltic coast with scant concern for logistical arteries. I won fairly easily in both roles. 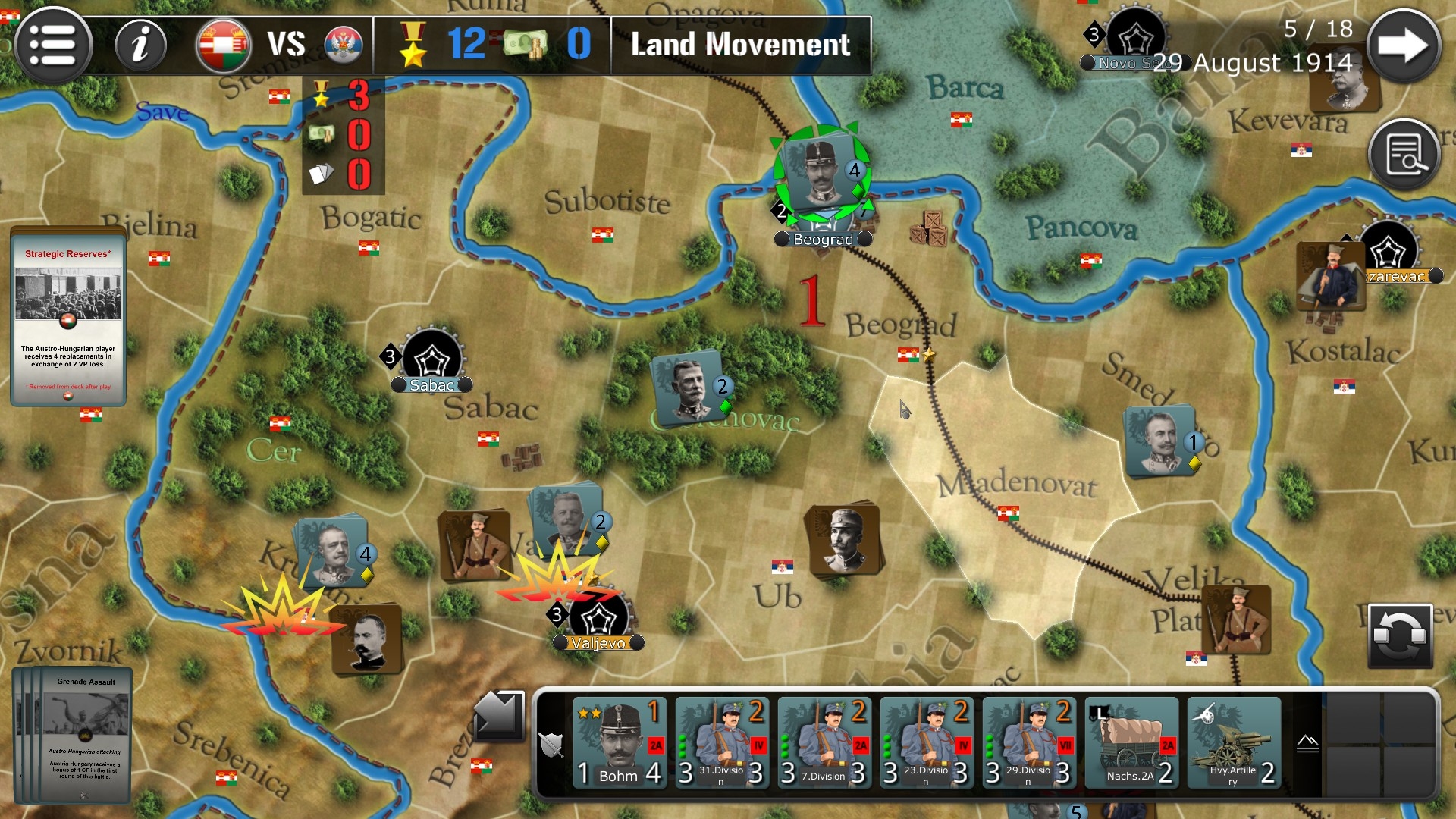 Serbia 1914 starts more promisingly especially if you opt to play the power vengeful Austria-Hungary blamed for the assassination of Archduke Franz Ferdinand. Resisting the multi-directional invasion that sparked WWI should be tricky and is until the Hapsburgs start exhibiting familiar AI failings. Clusters of isolated units perish before they can reestablish supply lines. Stray leaders are captured with ease because they sit passively next to occupied areas rather than seeking the safety of nearby counter stacks. 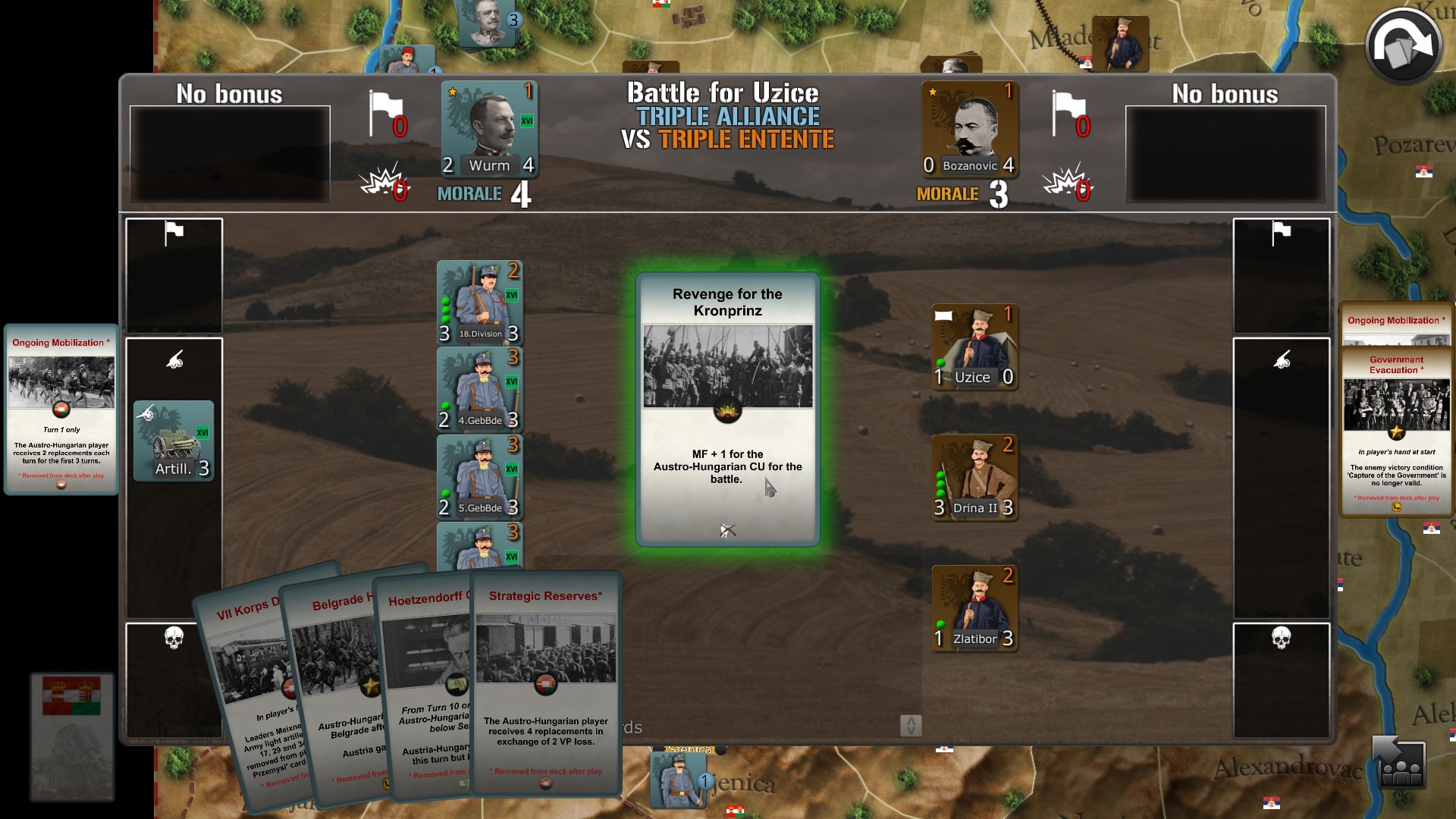 Challenge may be lacking, but the flavour of the campaign that ended with Serb forces evicted from their capital, and later from their homeland too, is palpable. Cards trigger periods of stultifying heat and disruptive rain. They trigger ammo shortages, leader changes, and typhus outbreaks. Although Serbia 1914 proved incapable of beating me I enjoyed the six hours I spent in its company. For a £2 outlay, perhaps it's unreasonable to expect more.

(Serbia 1914 isn't available through Steam but can be bought at waw-games.com and then manually inserted in the relevant Steam folder) 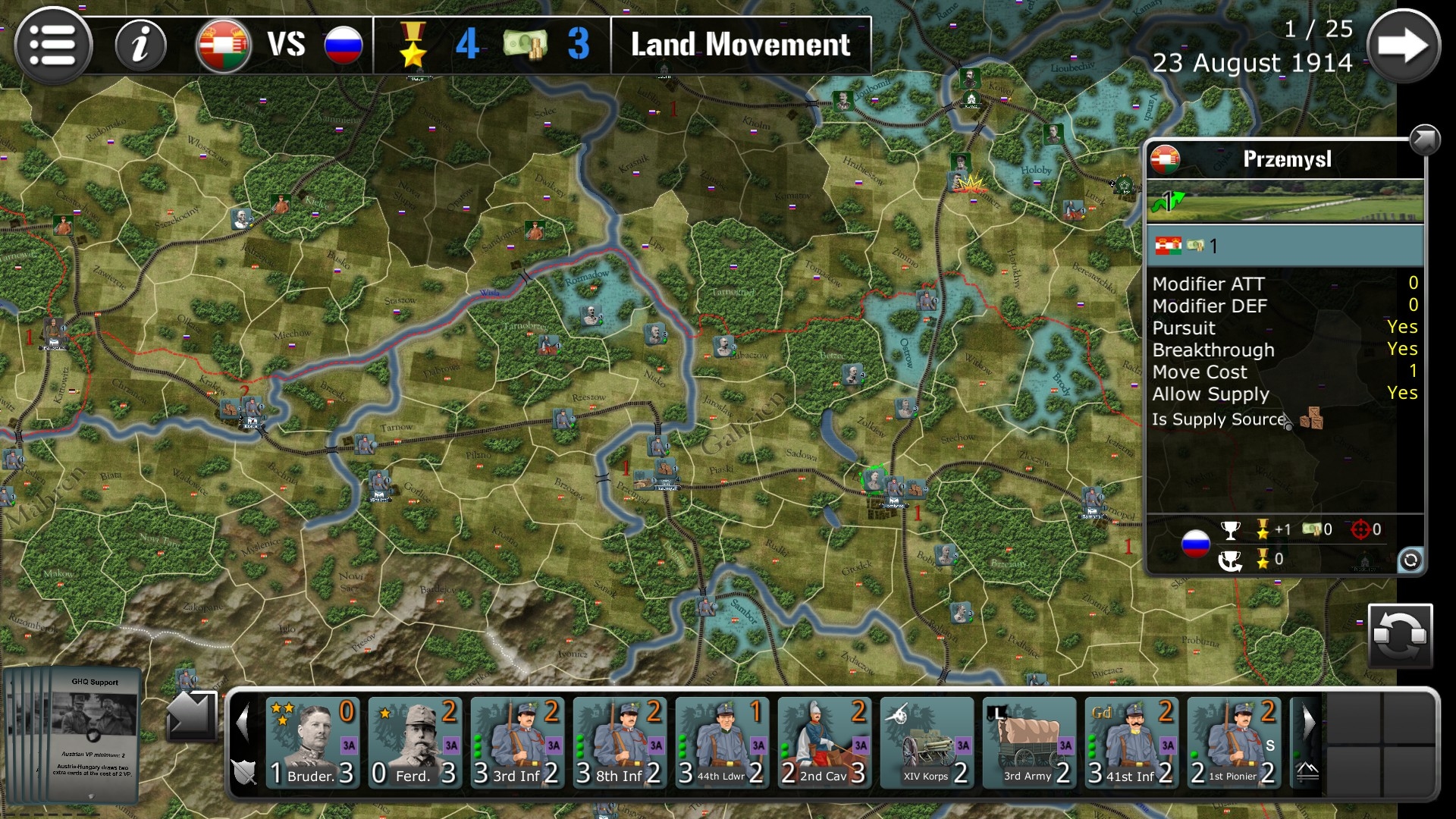 Tannenberg and Serbia are soon to be joined by a third WWI release - Galicia 1914. A recreation of Austria-Hungary's disastrous early push into what is today Western Ukraine and Southern Poland, the map looks roomy, the unit count high, and the turn ration generous. If the Russians manage to cow me the way they cowed Conrad I'll be more than satisfied. I'm tired of gazing at congratulatory victory screens in Wars Across the World. 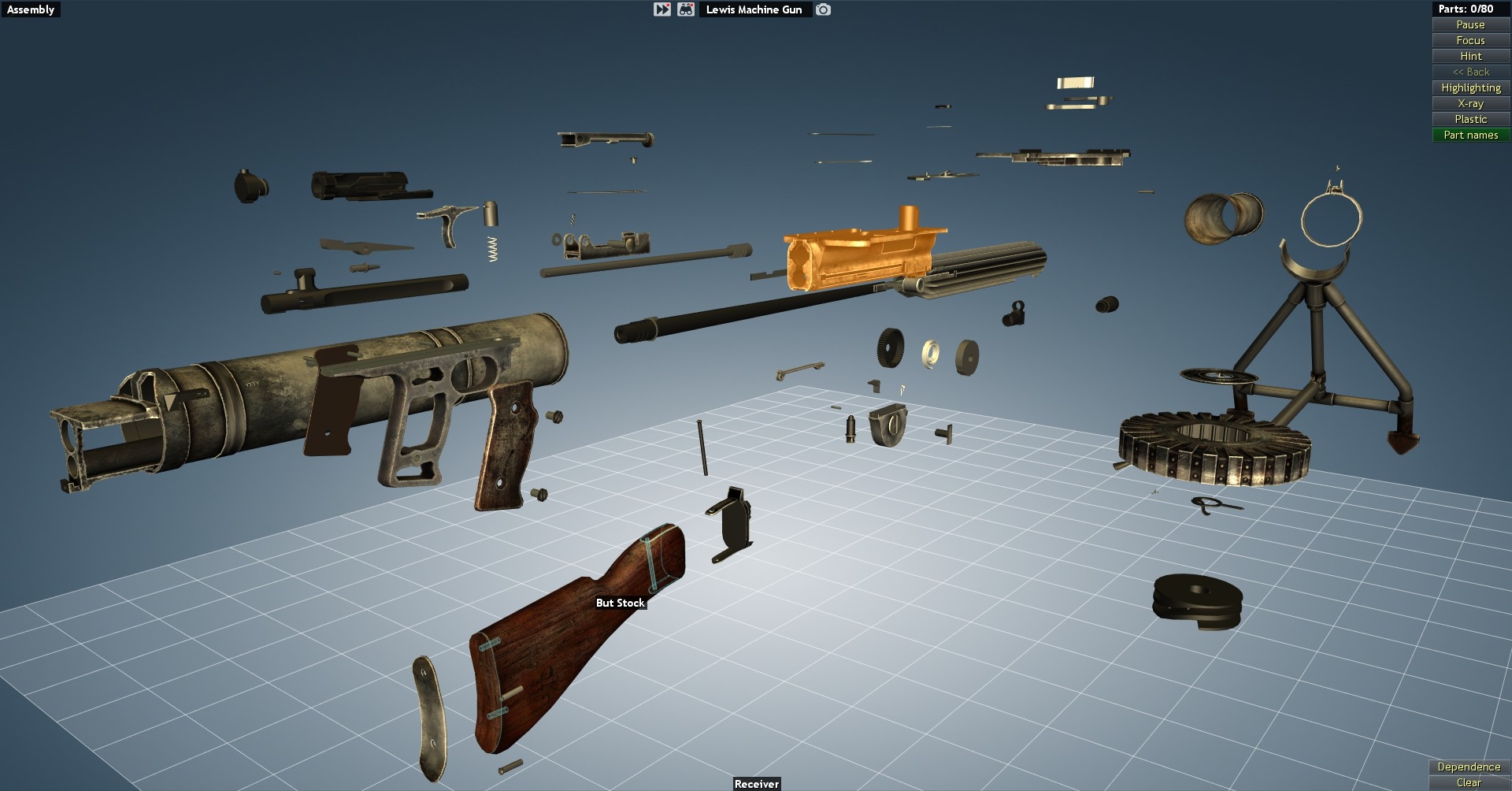 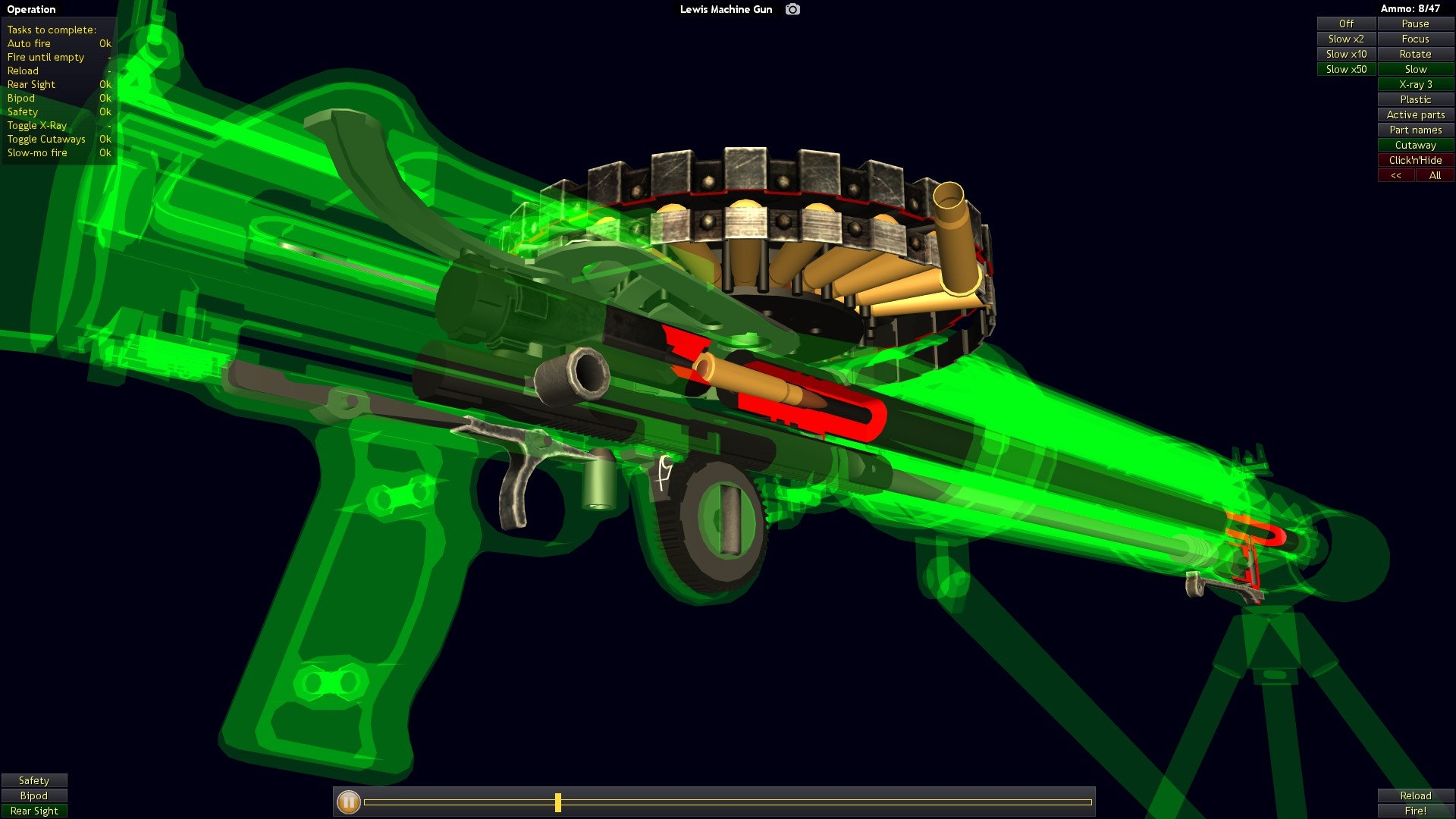 Oddly, some of the game's most interesting Great War firearms are not included in the WWI pack. Without full access you won't be able to dismantle and assemble lethal landmarks like the Chauchat, a temperamental but groundbreaking automatic rifle of French origin... 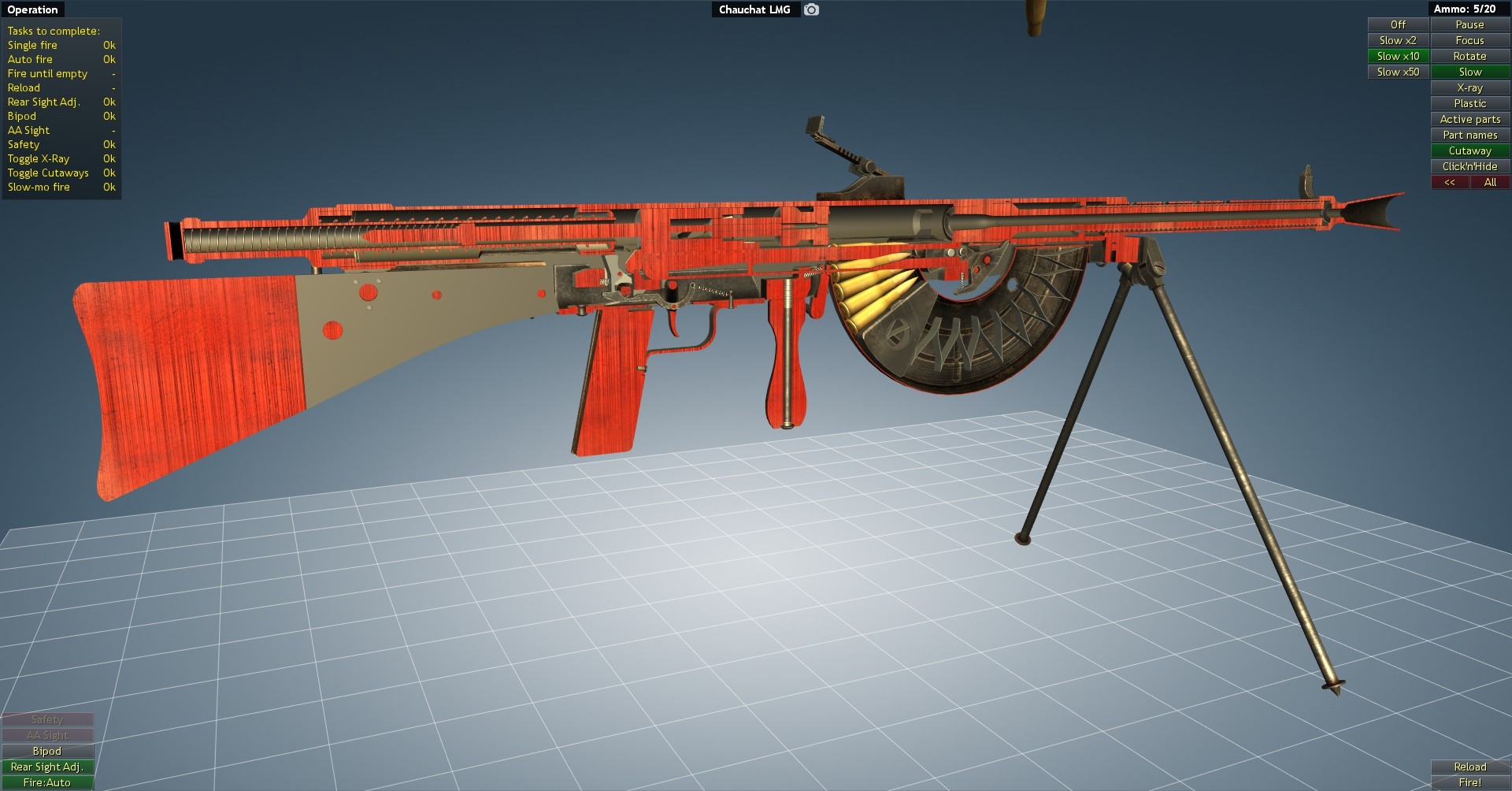 and the (very) late-war Fedorov Avtomat, the AK-47's great-grandfather...

If World of Guns was closer to Plane Mechanic Simulator in spirit - if there were repair tasks, period surroundings and sound effects - I'm sure I'd reach for it more often. Traditionally sim-smiths have sought to evoke conflicts like the Great War by reproducing the drama and danger. One wonders what could be achieved through painstaking reconstruction of more mundane situations and activities.

And talking of evocation, have you ever played Temporality? In its own way, James Earl Cox III's free, haunting two-key soldier soliloquy, is just as realistic a Great War simulation as Flying Circus.