If you don't want your column to be joyridden you really shouldn't leave it unattended next to a chap who's just spent the past week replaying one of the most diverse and colourful wargames money can buy in order to discover whether the talk of improved AI and fewer bugs is true.

Strategiae's history-bestriding conflict compendium has been around for over a year now. I've been watching its DLC list steadily lengthen, and, from time to time, trying a tempting expansion or official mod. What I hadn't done, until this week, was return to the (currently) £5.75 'base pack' to find out what difference fifteen months' worth of engine improvements and bug fixes had made to the ten original scenarios. 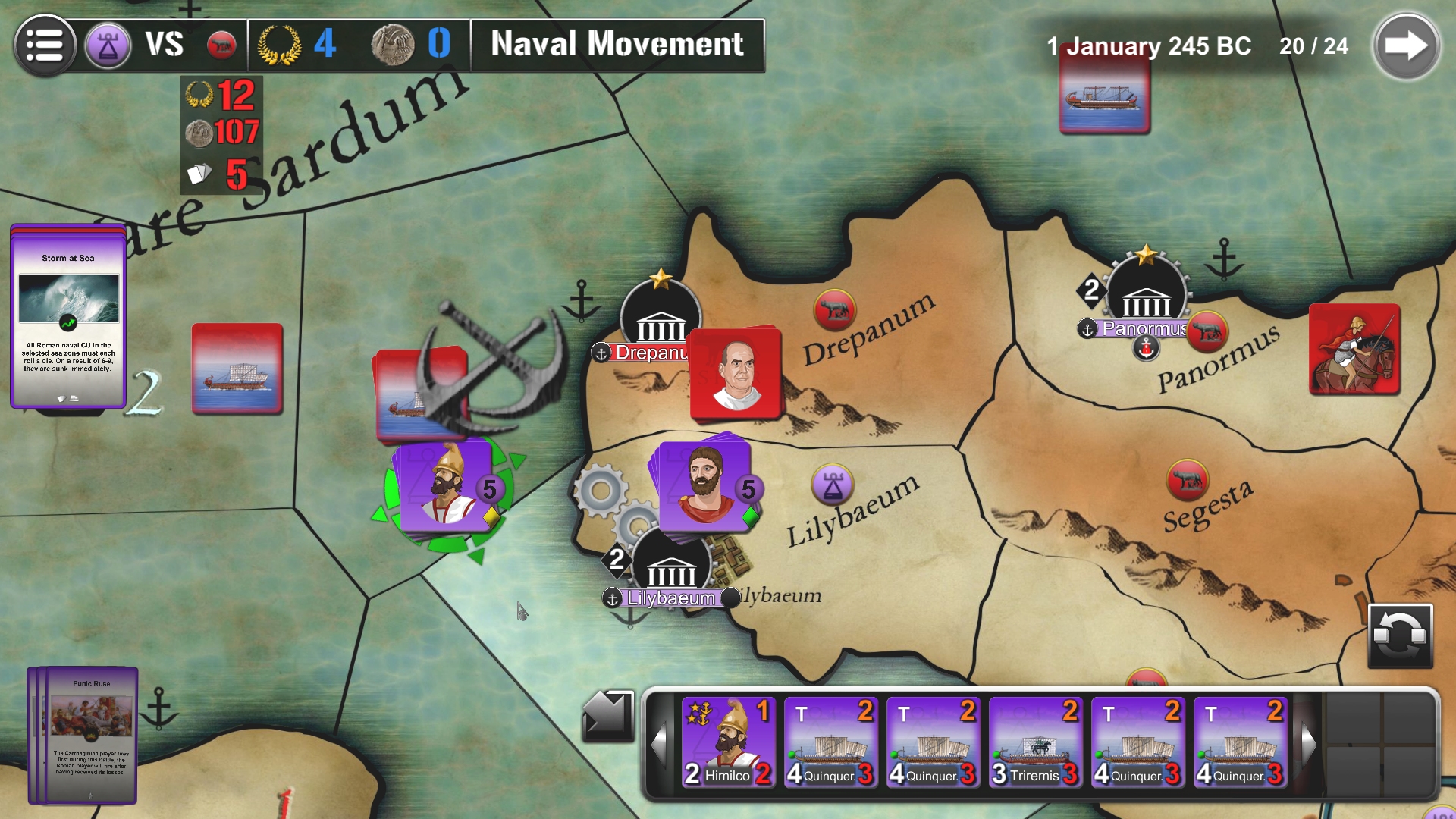 Using the term 'scenarios' in connection with WATW actually feels a tad unfair because one of the game's most endearing qualities is the way it persuades you that you're playing a medley of standalone titles rather than a homogenous heap of sibling skirmishes. Whether you're fighting over pre-Christian Sicily, or a tract of 19th Century Virginia or 1940s Normandy, although the basic turnbased play mechanics are the same, bespoke maps and card decks breathe a surprising amount of individuality and flavour into proceedings, and rule elements that are at the heart of one challenge can be peripheral or totally absent in another. 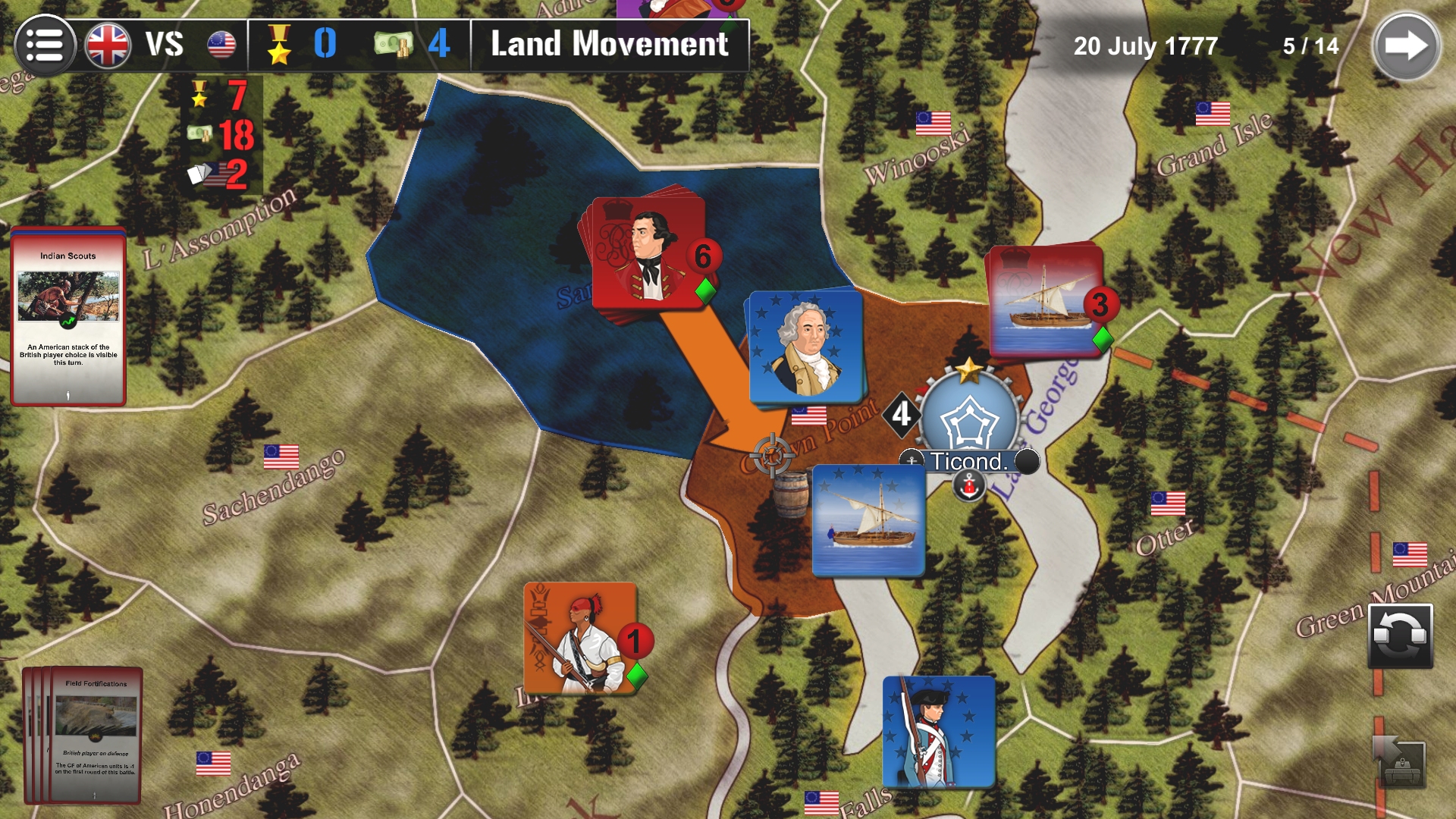 In the Birth of America-reminiscent Saratoga 1777 stealthy Native American units and riverine transport are potentially pivotal. Allied airpower plays a crucial role in Normandy 1944. Ships unlock wealth, enable sieges, and ferry vital troops in Hamilkar 264. In Bull Run 1861 you're a fool if you fail to utilise the rail network.

As the French devs make clear in their Steam spiel, once you've learnt the WATW way once (not an intimidating task) you're laughing. You can hop from conflict to conflict as effortlessly as a battlefield blow fly switches corpses. Each scenario is prefaced with a paragraph or two of special information, leaving the majority of scenario-specific novelties to be introduced painlessly via annotated cards as the action unfolds. It's a genuinely inspired system and, combined with relatively low unit and turn counts (victories or defeats are usually achieved within an hour) gives the game wieldiness and pep rare in the genre.

And though play patterns don't always feel completely plausible, there's a historical richness here that most other pop wargames can't match. Communicated primarily through those cards and through the beautifully illustrated counters, Strategiae's enthusiasm for sometimes delightfully obscure themes invariably shines through. 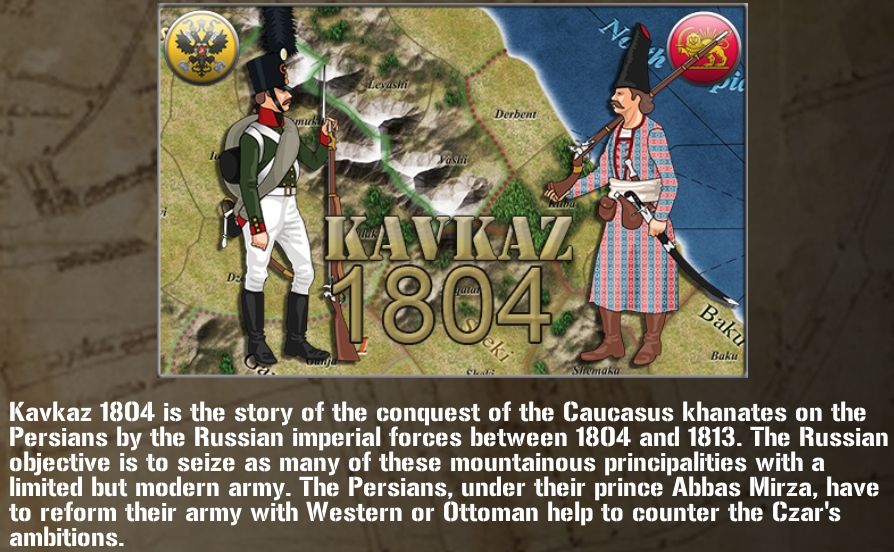 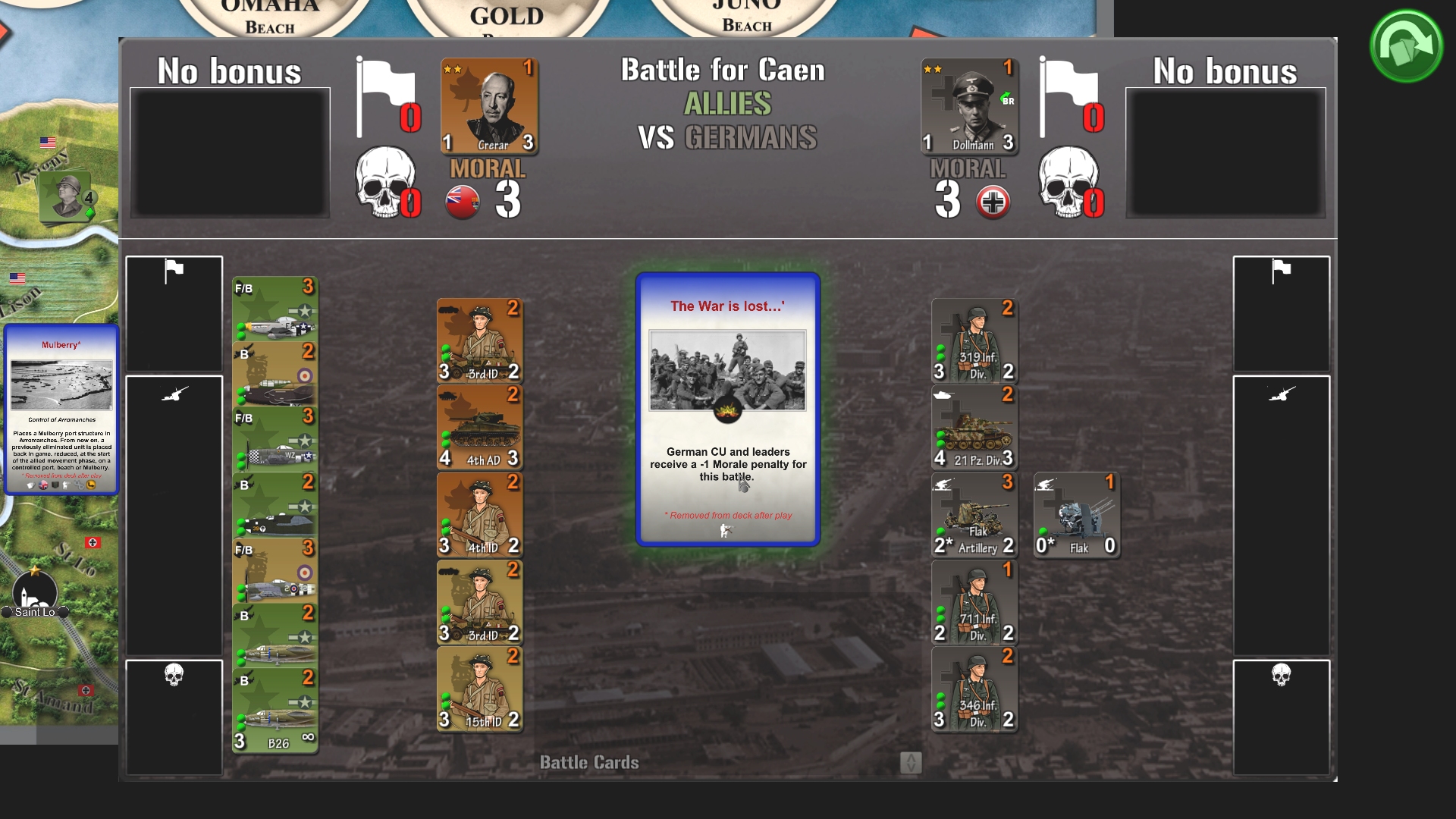 Surely, at some point during the past year at least one anglophone user must have mentioned on the official forum that 'morale' is not spelled 'moral'? There are typos sprinkled thoughout the in-game texts but because this one appears every time the battle screen is shown, it's particularly glaring. 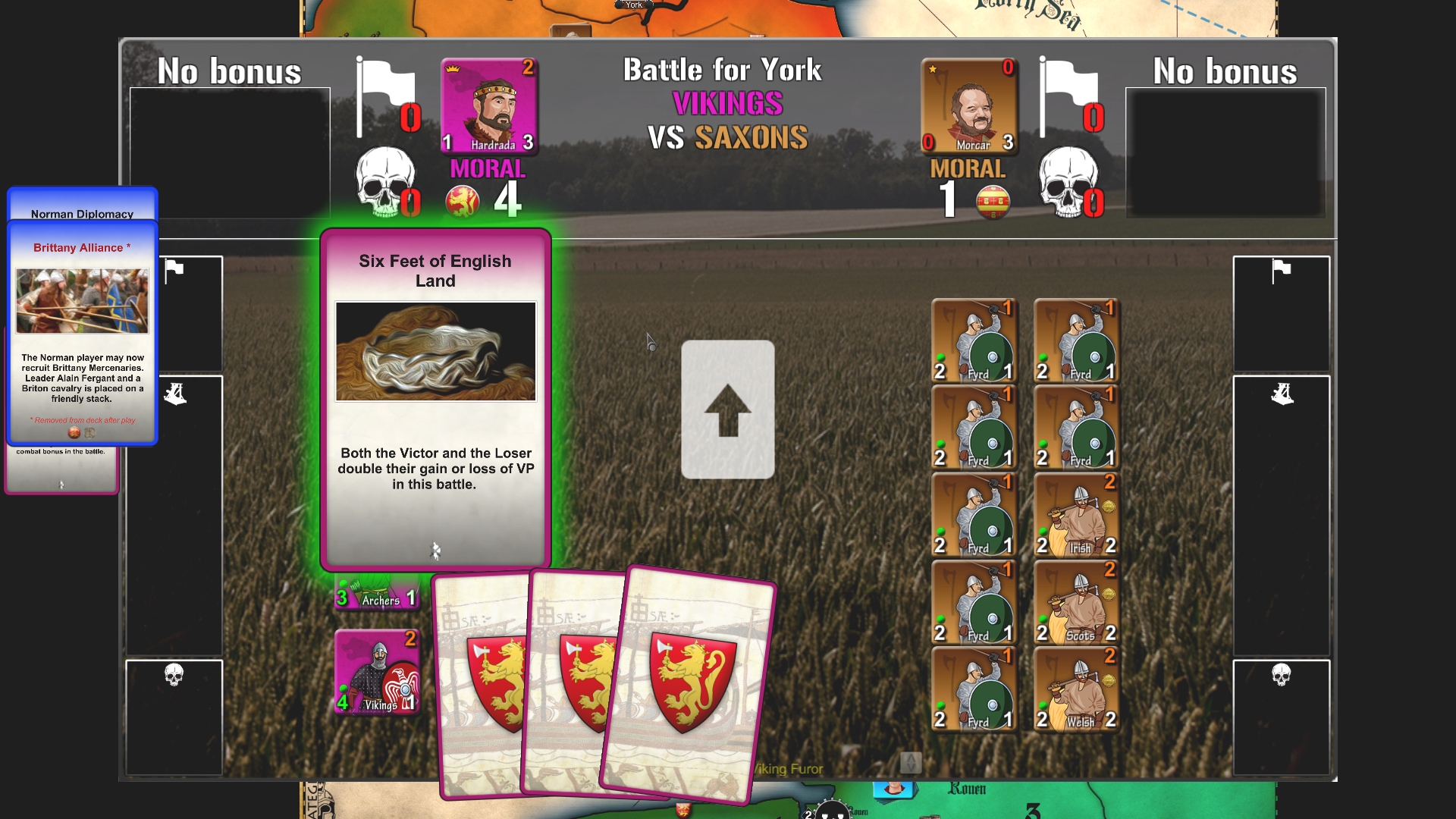 Definitely less common than they used to be, session-disrupting freezes haven't been totally eliminated either. I was juggling trenchers as Harold in the three-way (Saxons vs Normans vs Vikings) 1066 outing when I encountered one. Thanks to autosaves, it wasn't a major inconvenience, but like the minor graphical and audio bugs and the odd persistent GUI irritation (When I'm moving troops to an enemy-occupied region, please don't abort the action with a “You can't combine stacks” if I accidentally overlap them with a hostile counter pile when it's blindingly obvious what I had in mind) aren't the kind of issues I expected to encounter in a game that's been exposed to public scrutiny for over a year. 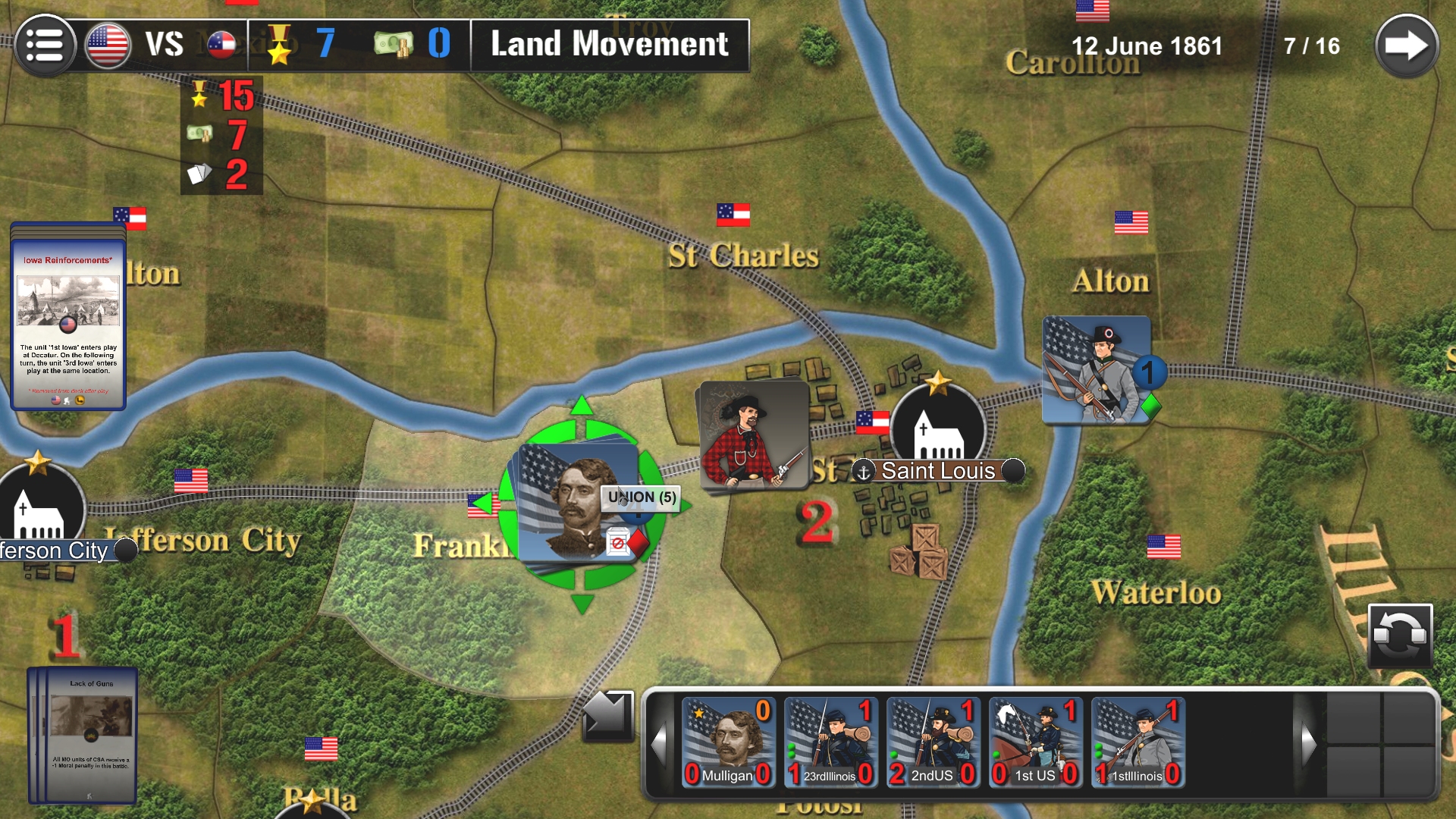 Without question, watching the AI struggling to cope with my less than brilliant manoeuvres has been the most disheartening aspect of my return to WATW. Whatever Strategiae has done to tweak behaviours since launch clearly hasn't been sufficient. With the AI set to 'expert' (the highest level) the CPU still struggles to compete in the majority of base pack scenarios. Carefully assisted with a sympathetic map and thoughtfully placed deployment zones and Victory Locations it can hold its own (Try Missouri 1861 as the Union if you want to see vanilla singleplayer WATW at its best). Without a helping hand and the kind of careful balancing Strategiae seem either unwilling or incapable of providing, computer-controlled opposition rarely provides much of a challenge. 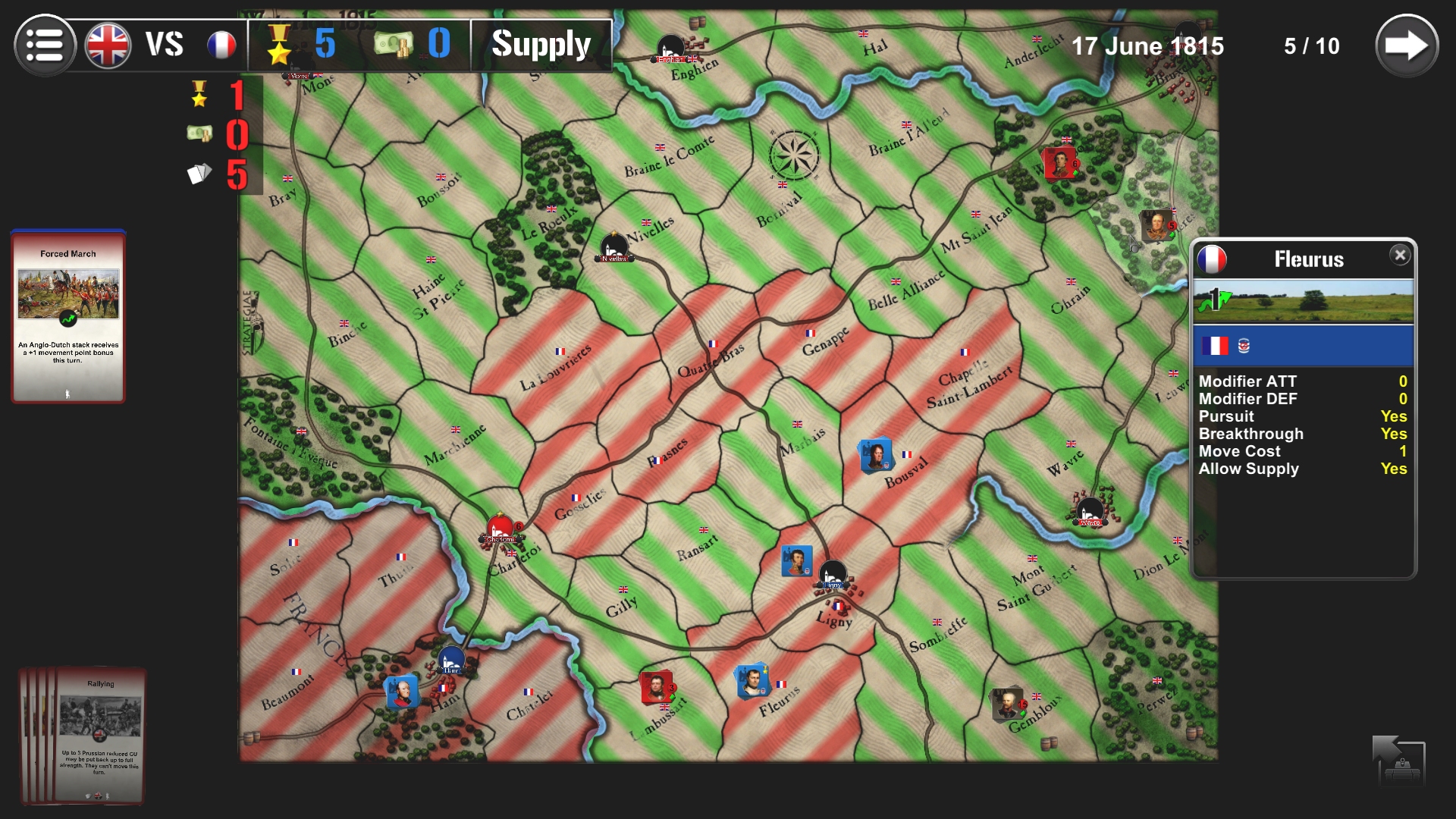 The Stéphanois urgently need to teach WATW's silicon stack shufflers to place greater value on big-ticket VLs and to better avoid death by strangulation. Most scenarios feature attrition modelling. Units that can't trace an uninterrupted route back to a supply source and aren't accompanied by at least one supply wagon or equivalent will quickly disintegrate if not reconnected to the logistics net by a caring colleague. Too often the AI exposes itself to this fatal form of isolation. 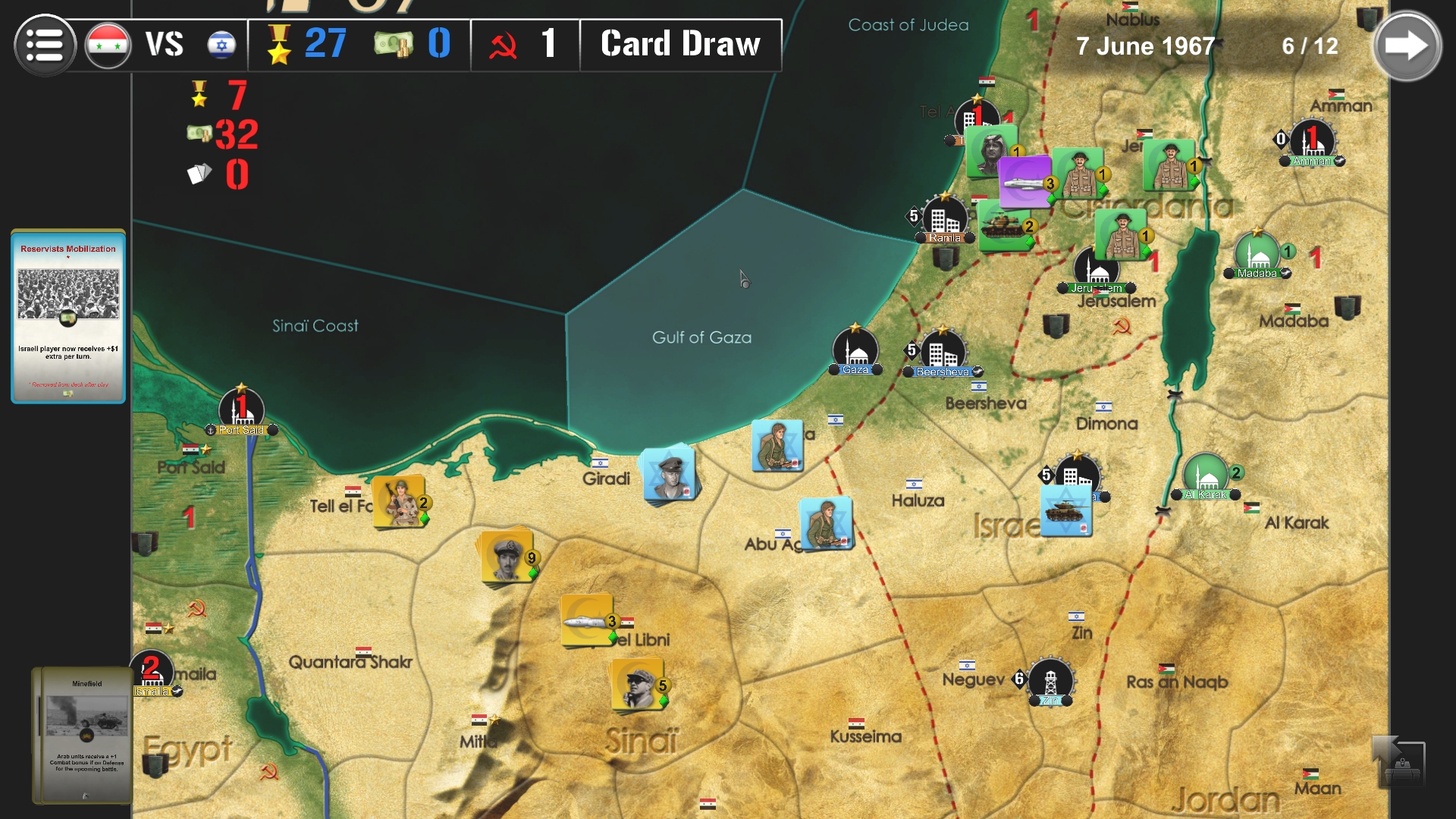 The computer's tendency to leave key locations thinly defended can prove catastrophic too. Playing Bull Run 1861 as the CSA (the 'hardest side' according to the briefing) I sashayed into Washington, snatching a quick victory while the shockingly negligent bluecoats fussed elsewhere. As the Arabs in Six Days 1967, I achieved a similarly unlikely coup driving deep into the heart of Israel while Sharon and his pals swanned about the Sinai obliterating Egyptians. All the research that has gone into constructing the card decks, the maps, counter art and OOBs, it can all be undermined in an instant by implausible AI actions like these. 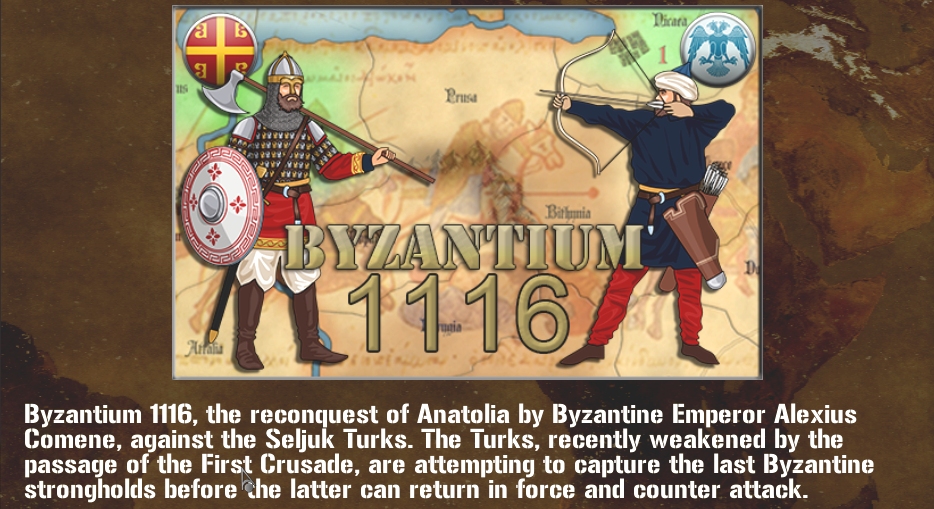 The frustrating thing is the engine isn't congenitally incapable of providing challenge or producing gripping climaxes. After trying the latest DLC as the “hardest side” (the Turks) and storming to victory in less than thirty minutes without losing a battle, I almost put it aside. 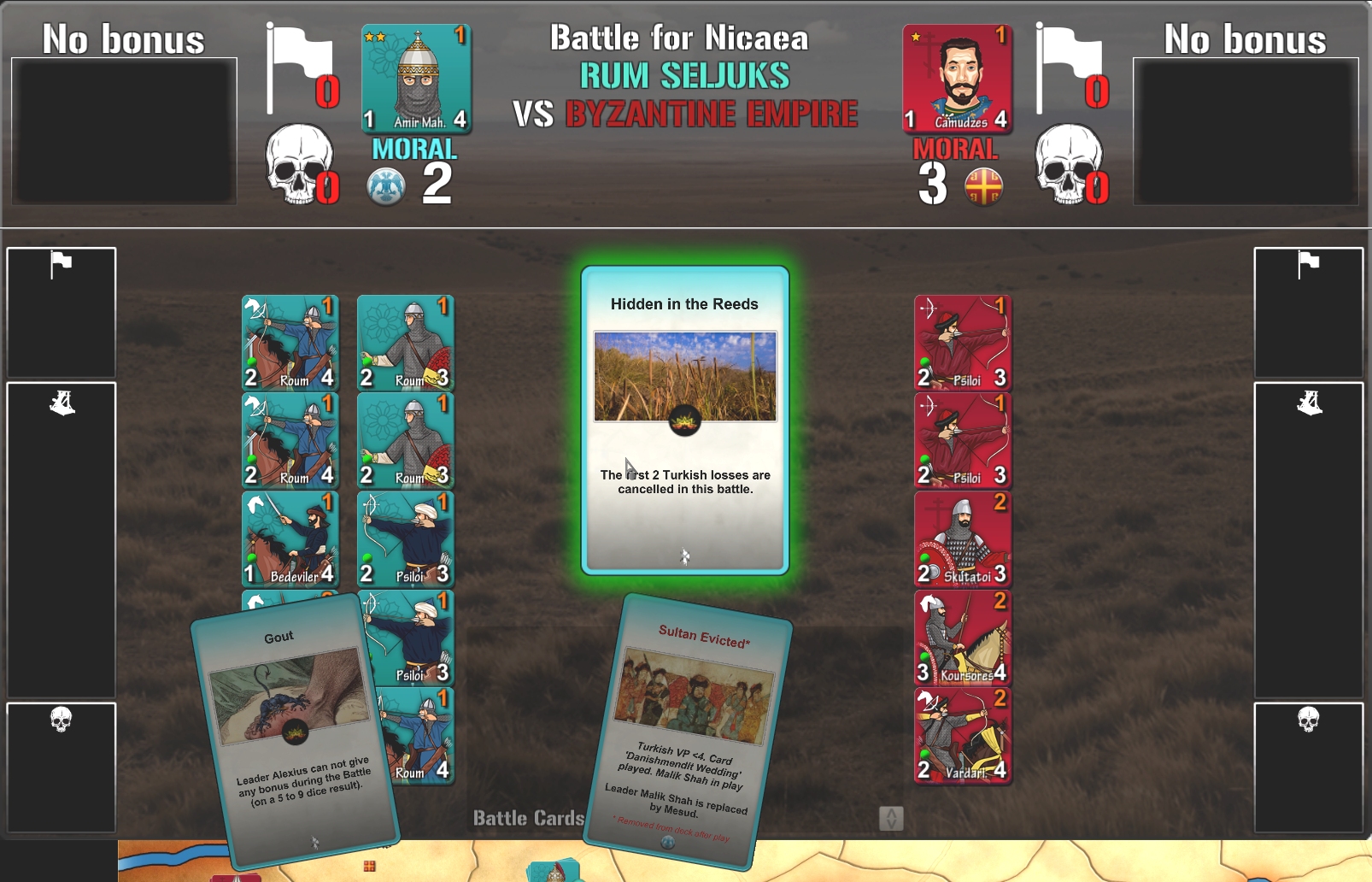 I half-heartedly embarked on a game from a Byzantine perspective expecting an even swifter triumph, but found instead the kind of tight, to-and-fro campaign that, in a week with the base pack, I'd experienced only once or twice. Overstretched and wrongfooted by Seljuk sallies in the north, north-west, and south-west I wound up contemplating one of WATW's most unfamiliar sights, a defeat screen. I've now seen that screen three times on the trot, which suits me just fine. To win in 12th Century Anatolia as the Byzantines I can see I'm going to have to be far more creative with my cavalry and possibly abandon some outposts early on. 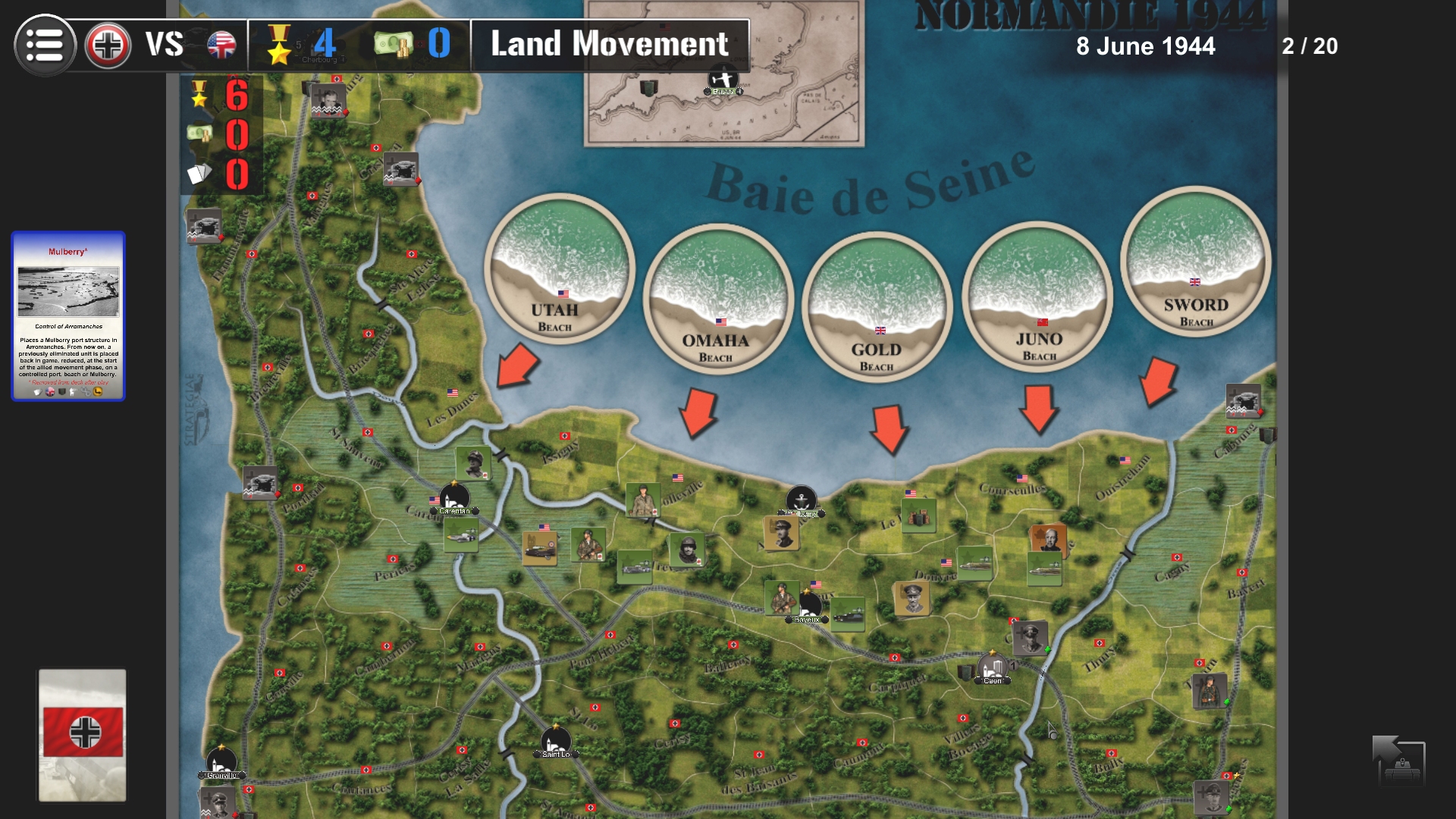 Right now, the base pack doesn't show Wars Across the World at its best. While it proves the engine can turn its hand to almost any era of land warfare, few of the provided scenarios are sufficiently challenging to justify multiple solo playthroughs. Assuming Strategiae aren't on the verge of patching in noticeably smarter AI, I'd love to see them gently reworking the lion's share of the base pack content at some point. If scenarios like Missouri 1861 and Byzantium 1116 can provide close-fought compelling experiences then there's no good reason why, after a little TLC, AI-humiliating lemons like Waterloo 1815 and Bull Run 1861 couldn't do the same.