Although a person with long-term experience of just one rudder set really isn't equipped to review PC plane pedals, in a pinch he can probably be trusted to dash off a passable preview. Next Monday Thrustmaster release a 7kg, £450 lump of strikingly unorthodox engineering that will, I suspect, end up supporting the soles of many a serious flight simmer. Last week this hardware dilettante rested his plates of meat on said device and spoke to some of the people responsible for marketing and testing it. 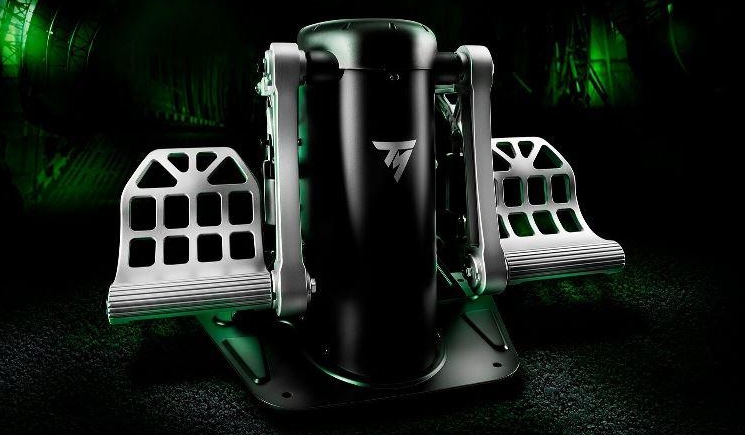 While most rudder sets hug the shagpile like exhausted puppies Thrustmaster's TPR stands proud like a petrified tree stump or discarded stovepipe hat. The sim chandlers from Rennes believe the unusual 'pendular' configuration, in combination with high quality sensors and sturdy all-metal construction, enables incredibly precise and fluid rudder control and braking. I'd be lying if I said I was able to verify this claim during the few minutes I spent abusing their apparatus over the Persian Gulf last Friday, but as Thrustmaster have 'previous' when it comes to designing superlative sim peripherals and are acutely aware of the importance of getting things right first time (“If we reach the market with some mistake it will be fatal. Fatal for the product... maybe even for us! We cannot do this.”) I'd be surprised if there wasn't substance behind the spiel.

Thrustmaster partners, the Virtual Red Arrows, have been using TPRs in combination with their HOTAS Warthogs for the past few weeks and seem extremely impressed. Dale Brewis, VRA's current 'Red 5' felt Thrustmaster had “Absolutely nailed it”. Steve Cousall, 'Red 2', told me about the significant difference the new pedals made when flying sim helos (when Steve isn't strapped into a DCS Hawk he's often to be found darting about in DCS whirlybirds). I flatter myself I can detect the bouquet of bull manure at a hundred paces, and nothing the British aerobats told me in the course of a fairly lengthy and wide-ranging conversation (expect more on the amazing VRA in a future column) felt like it was rehearsed or prompted by corporate loyalty. 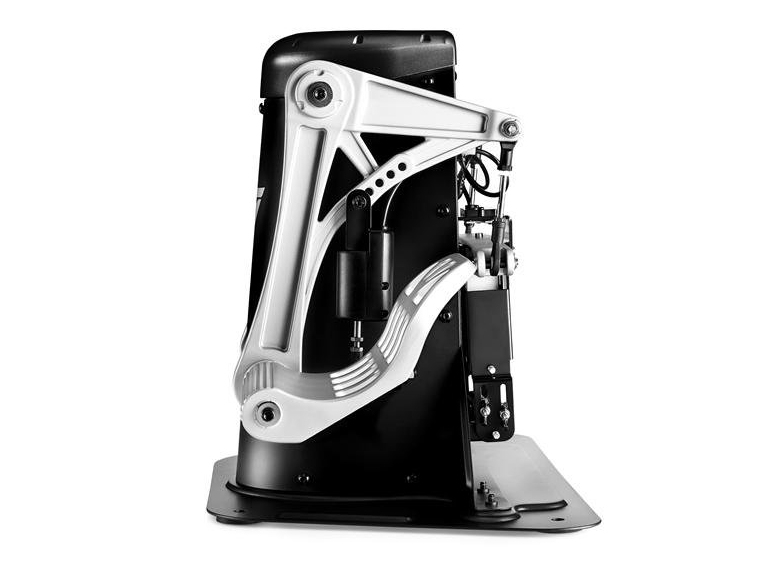 Realising that everyone's ankles and sim thrones are different and all red-blooded simmers love messing about with allen keys, Thrustmaster have built in considerable customisability. The pedals can be mounted at any angle between 35° and 75°, and the overall resistance altered by switching a heavy-duty rear-mounted spring (two different springs are included). The set's colossal weight means you probably won't need to worry about stability or anchoring, but holes for bolts are provided just in case you own a motion platform or live close to an active quarry. 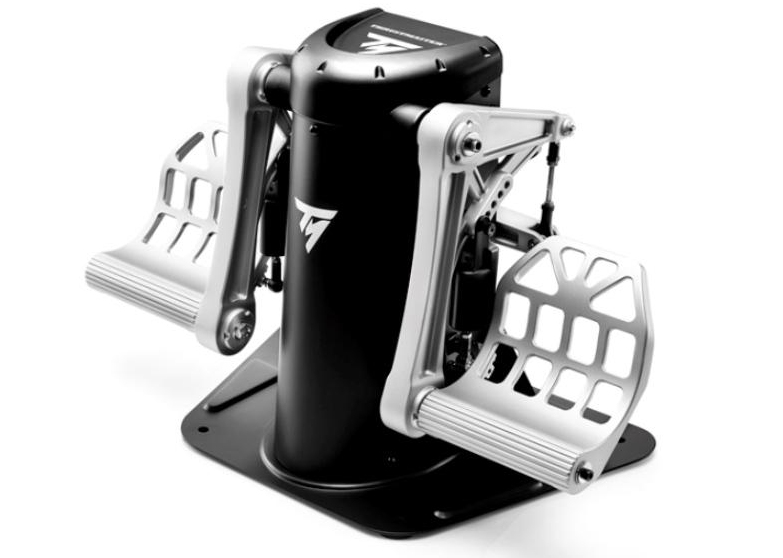 …then, via a series of informative graphs, explain how the TPR compares to cheaper rudder pedals like the Logitech 'Saitek Pro' set and the MFG Crosswind, and pricier ones such as the GoFlight GF-RP2. As I'm not that individual, I'll just jettison some asterisks and hurry on to the next story. 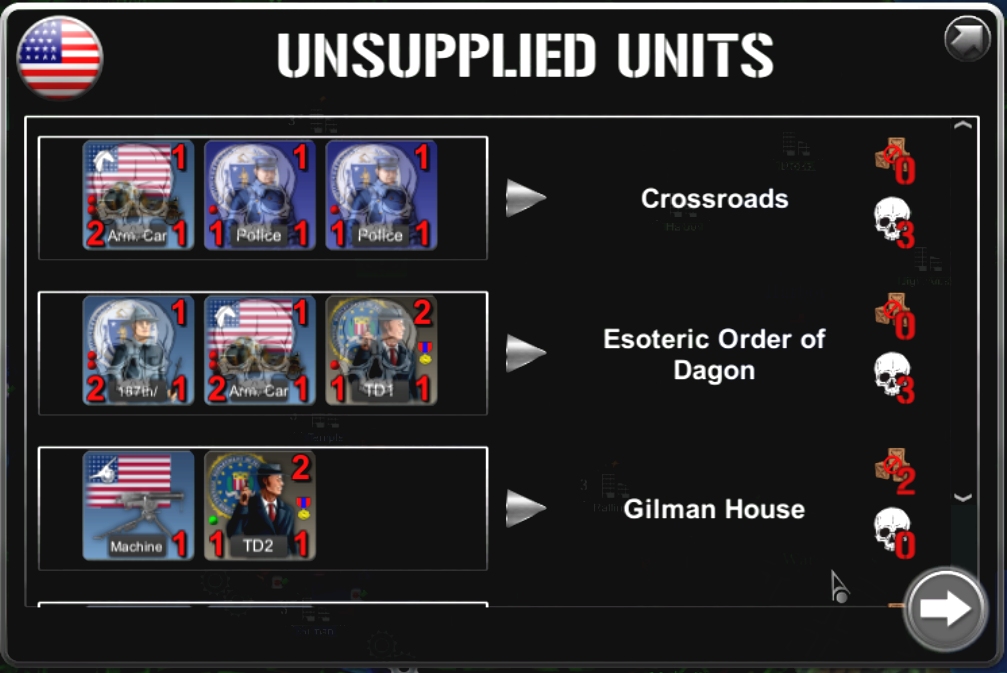 Cod's bodkins! The fish folk have done it again. For the third time in a roe the AI-controlled Deep Ones in 'Innsmouth 1928', a free scenario for peripatetic historical wargame Wars Across the World, have scuppered my attempts to liberate Massachusetts' most pungent/pagan port by snipping my supply lines. I thought Jameson would be able to hold the Railway Station with two police squads and an armoured car, while Hoover Force with its slow but powerful Renault tank went to the aid of beleaguered Anderson at Marsh Manor. I thought wrong. 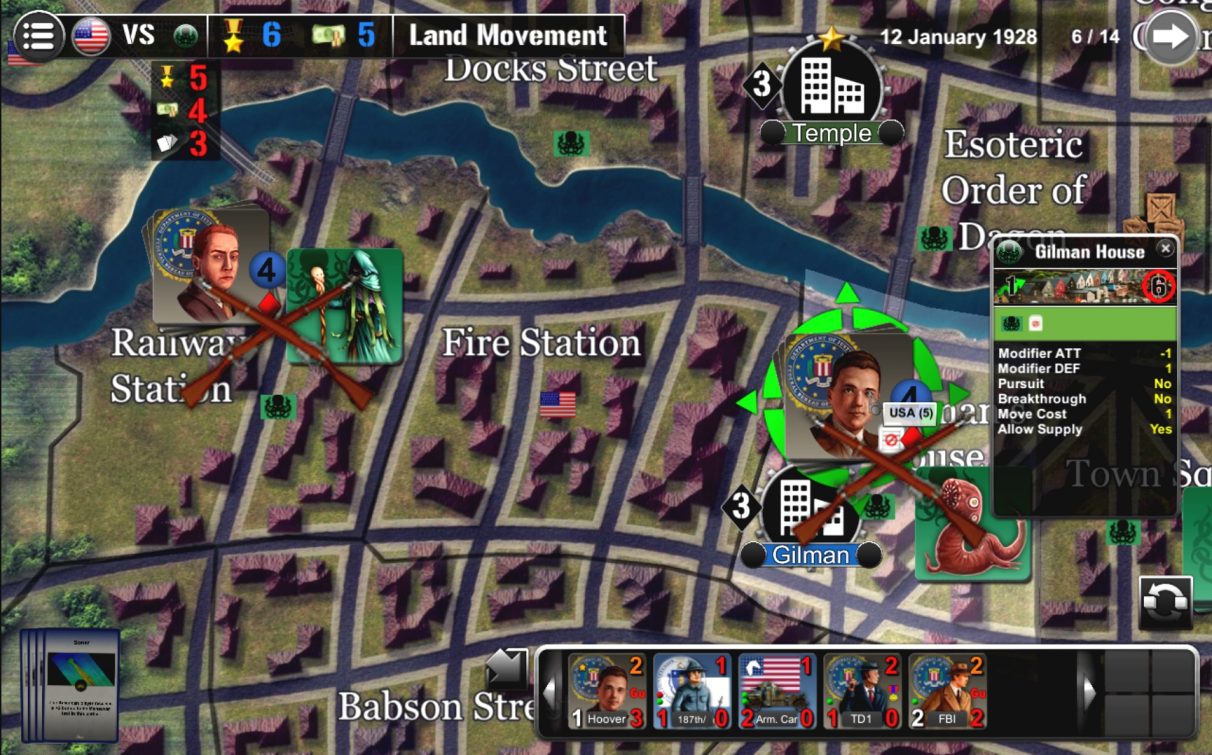 French strategy smiths Strategiae have been threatening to inject a bit of lobster-potty Lovecraftian menace into their DLC-fecund AGEOD-style TBS for over a year now. Hopefully it won't be another twelve months before they experiment with the outlandish again because Innsmouth 1928, which is currently only available through the official website, is probably my favourite WATW scenario thus far. 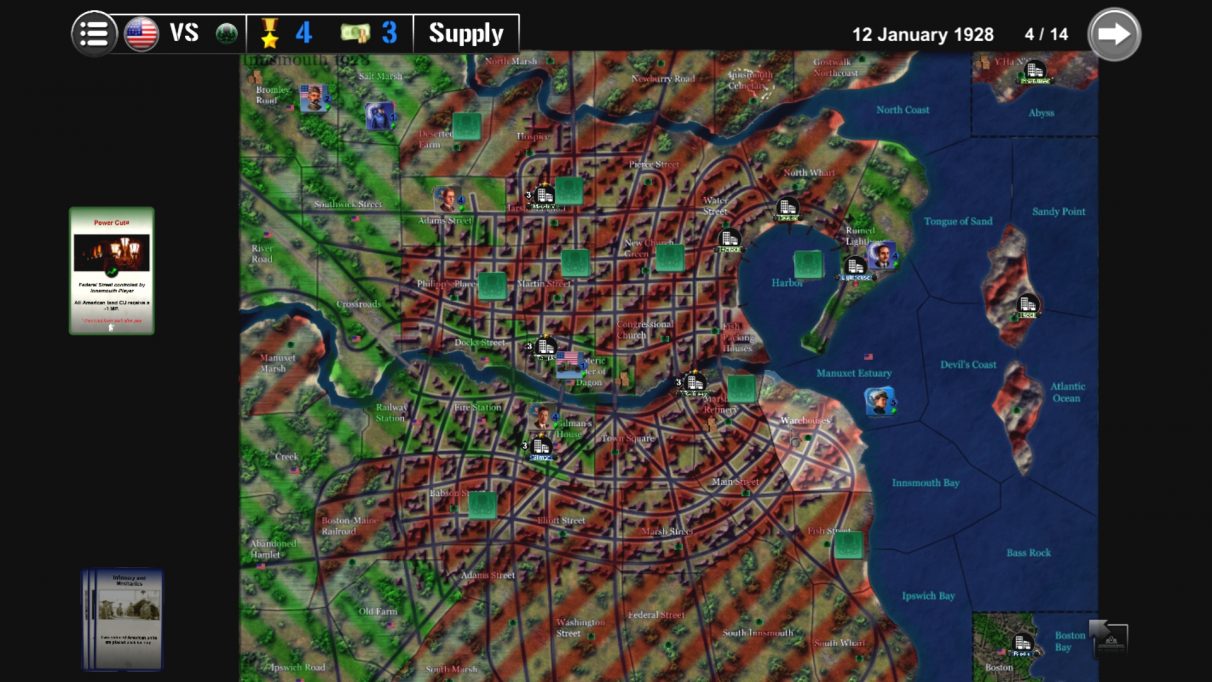 You could argue that the 'one hour' turns don't quite fit with the brutal out-of-supply rules, or that the sprinkle of card typos should have been spotted and fixed before release. You could point out that the AI, though adept at logistical interdiction, doesn't value VLs as highly as it should. But you'd have to be a horribly soggy eiderdown to criticise the crafters of this entertaining freebie for going with fish-frogs and G-Men for a change. 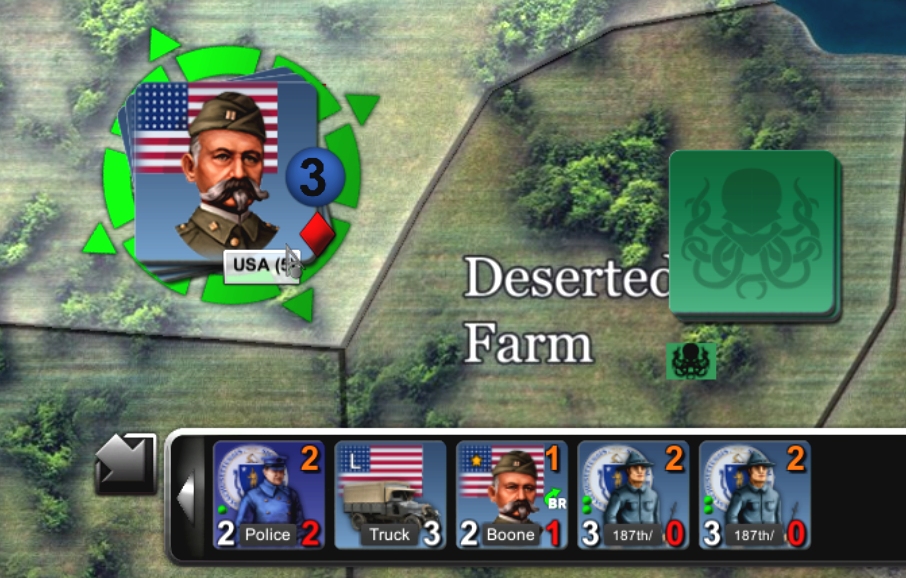 Fetching counter art, a colourful custom card deck, and some disgustingly moist sound effects, ensure the pulpy theme thoroughly permeates the action. Dispersed, non-negotiable deployment positions mean the US player is faced with interesting tactical choices from the outset. To seize the VLs near the centre of the map*, three distinct US forces must be imaginatively coordinated. How do you secure Deep One strongholds like Gilman's House and the Esoteric Order of Dagon Temple without exposing your supply lines to the lunges of a dangerously opportunistic AI? Where should Brockett's Marines be put ashore in order to best aid the pushes from the SW and SE? What abominations lurk in that counter stack making for the supply source on the Bromley Road? There are few obvious answers.

*The most reliable source of Victory Points, although you can also garner VPs by winning large battles and slaying enemy leaders. 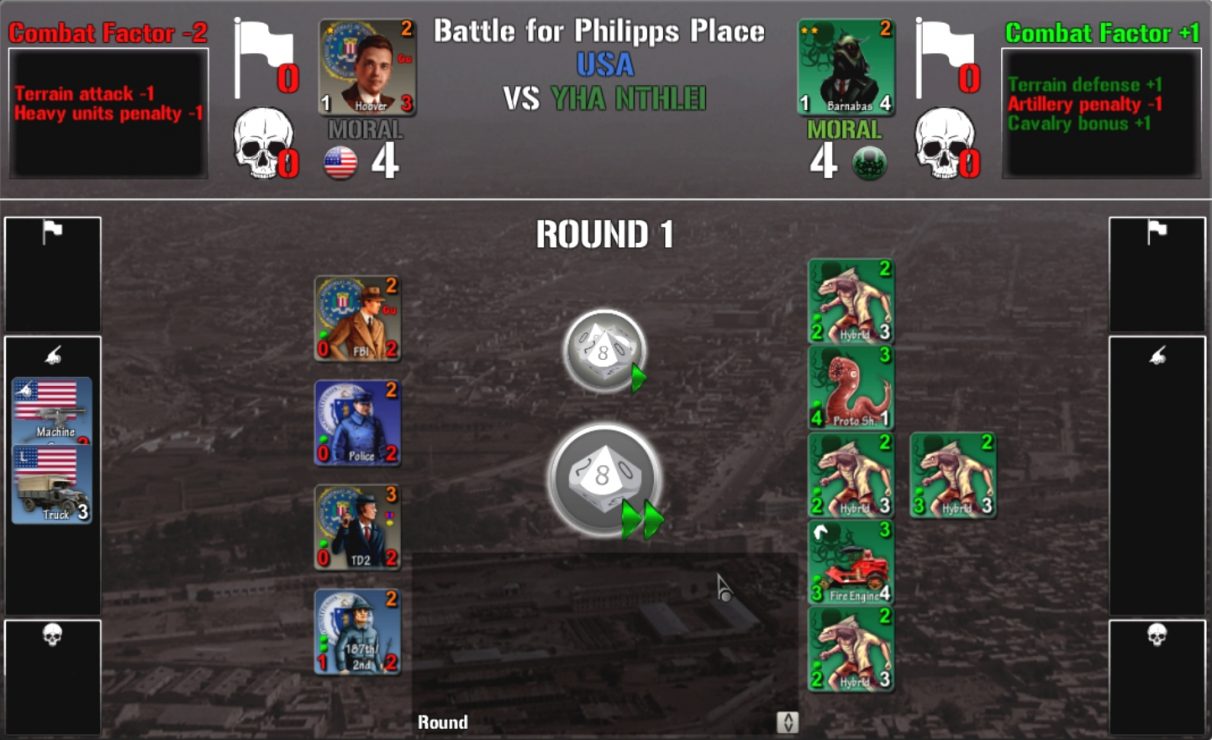 It's rare for one of the fourteen multi-phase turns to pass without at least one nerve-racking battle (scraps are relatively simple dice duels, but no less gripping for that). Thought-provoking movement, card play, and spending decisions (region-linked income can be spent buying casualty replacements, or new units or random cards) grace most turns too. 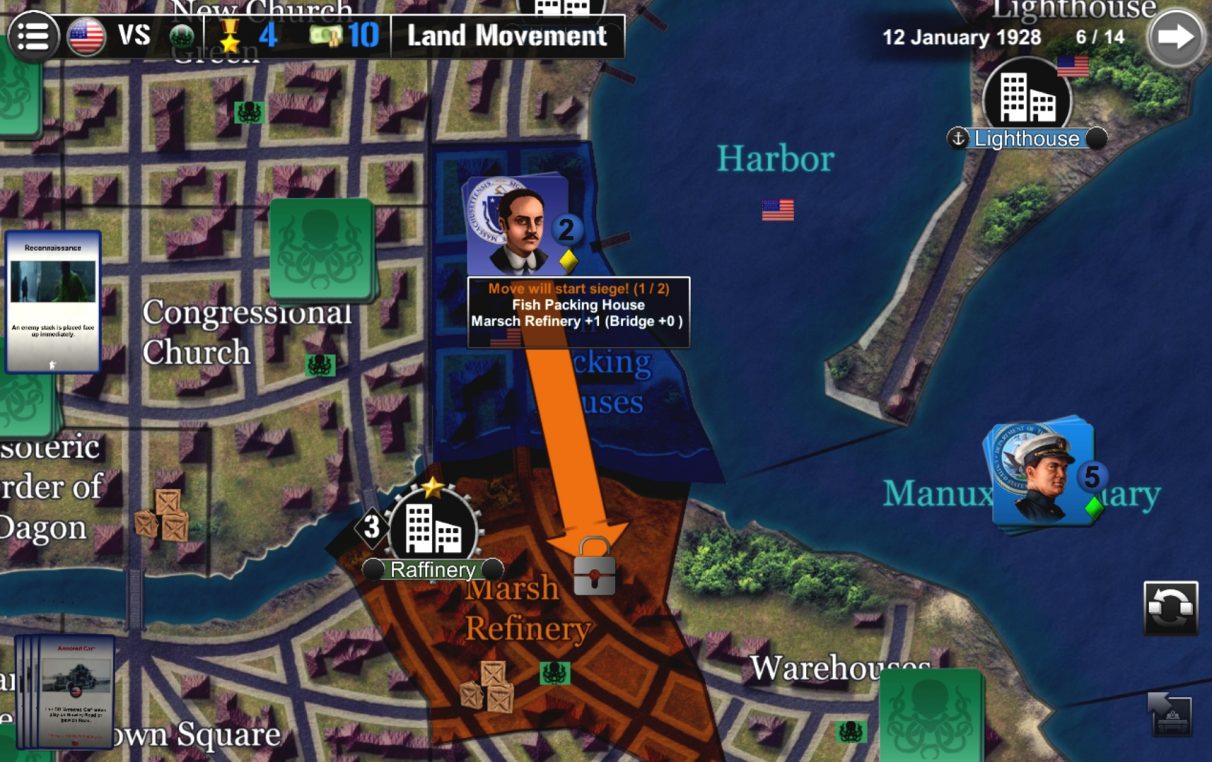 I'd happily play a mini campaign set in this world of gills and gunboats, tentacles and tommy guns, but as Strategiae's eclecticism doesn't seem compatible with multi-episode add-ons, would probably have to resort to the editor to prolong things. 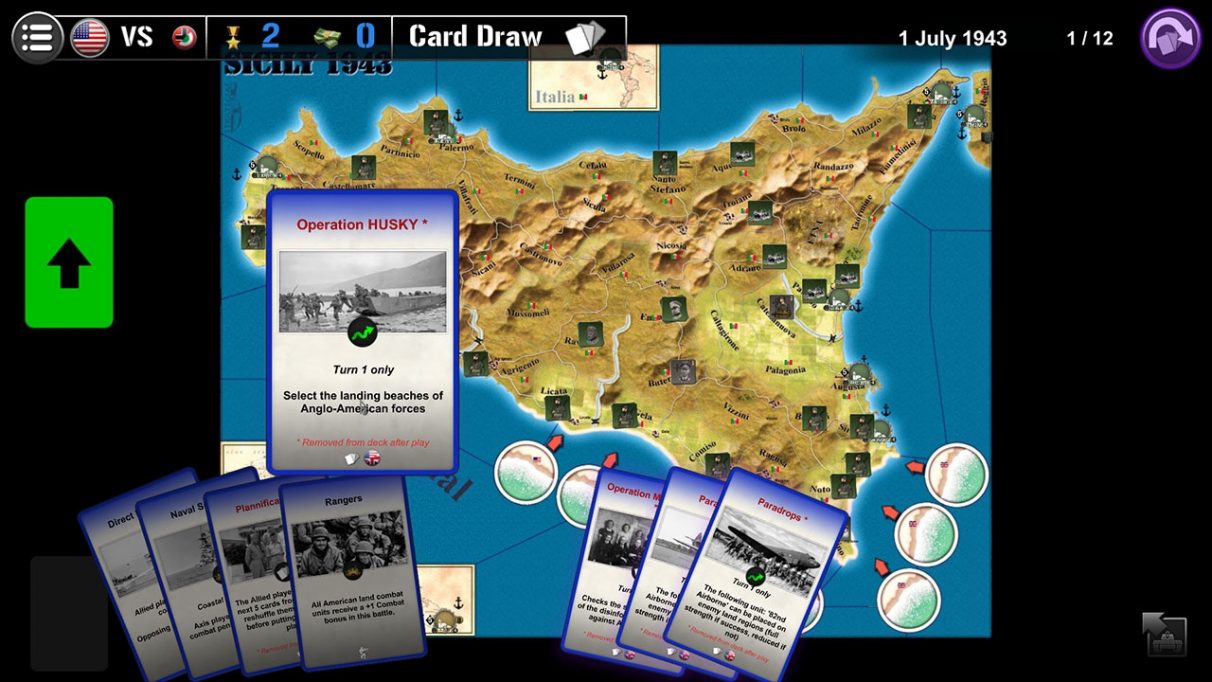 That powerful tool looks from a distance like a superb way for an amateur with strong ideas to launch a career in computer wargame design. One industrious fan has already used it to produce a scenario deemed payware worthy by the devs. Not available on Steam yet, Sicily 1943 offers WATW owners the chance to conduct Operation Husky in a manageable one and a half hours for a seemingly very reasonable £2.70. Reminded of Wars Across The World's friendliness, colour, and pace by Innsmouth 1928, there's a very good chance I'll end up pummelling the soft underbelly of Europe between Cheapside Orient games this weekend.