Being a left-leaning teenager in Britain during the 1980s wasn't particularly dangerous. You might pick up the odd knock during a fractious anti-apartheid or pro miners march, or accidentally scald yourself with clumsily poured carrot and coriander soup during a CND rally, but the chances of serious injury and death were slim. Commitment to the cause fifty years earlier meant something very different. Of the 2300 or so idealistic leftists who left Britain, Ireland, and the Commonwealth to fight for the Republicans during the Spanish Civil War, almost 1 in 4 perished on the Peninsula. 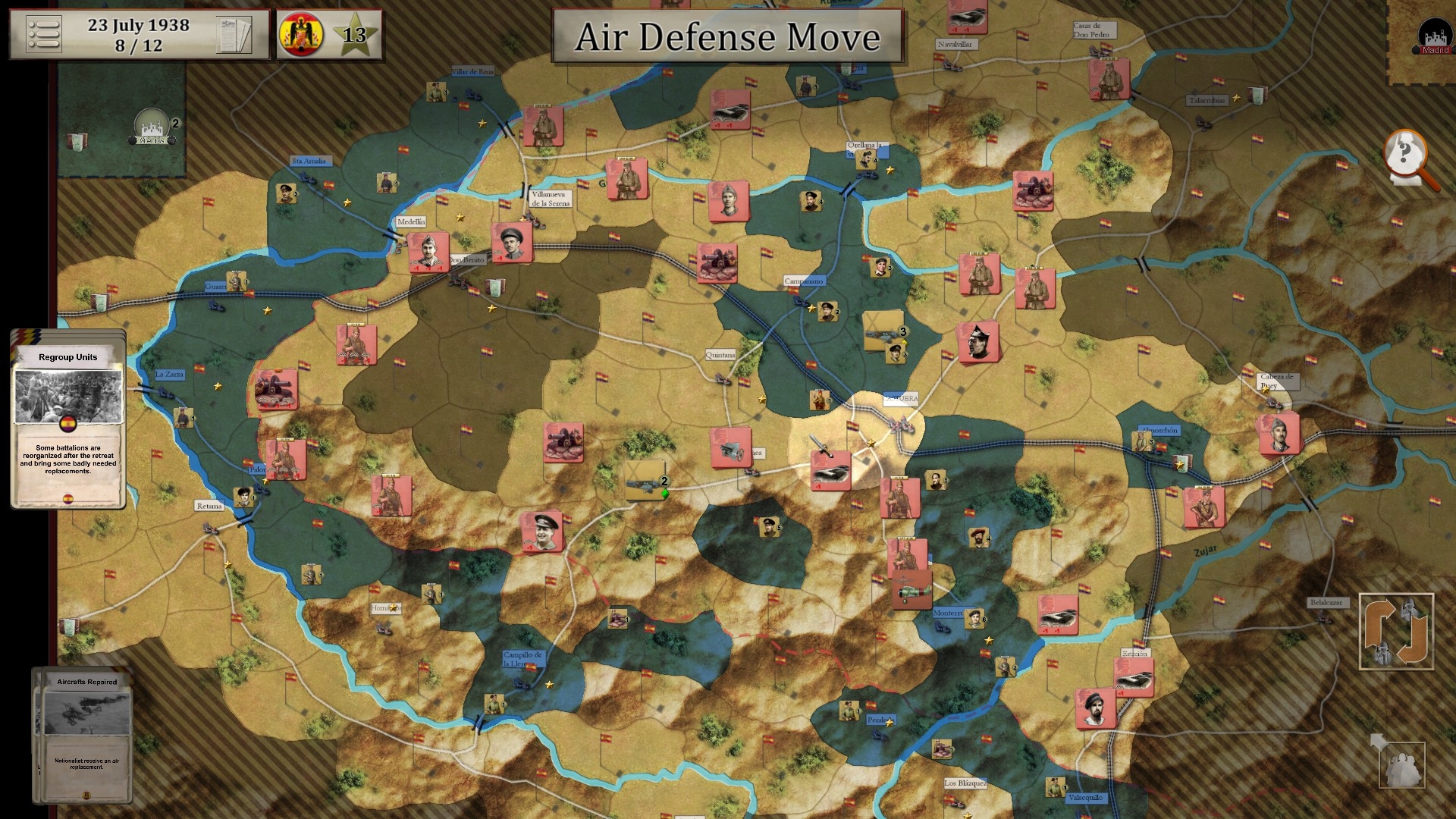 If you've ever idly wondered whether Socialist sympathies, unemployment, and an adventurous streak would have made you an International Brigadier had you lived through the Hungry Thirties, you're going to find it awfully hard to play as the Nationalists in Battles For Spain, a £24 standalone turn-based wargame from Spanish sprat Headquarter. Fortunately, all four of the game's pleasingly diverse scenarios - Guadalajara 1937 (an Italian offensive), Teruel 1937 (a deep-frozen siege), Mérida 1938 (a Francoist pincer attack), and Ebro 1938 (a contested river crossing) - can be played from the Republican perspective, so there's no need to lead the Stuka and flame tank equipped fascists if the thought appalls you. 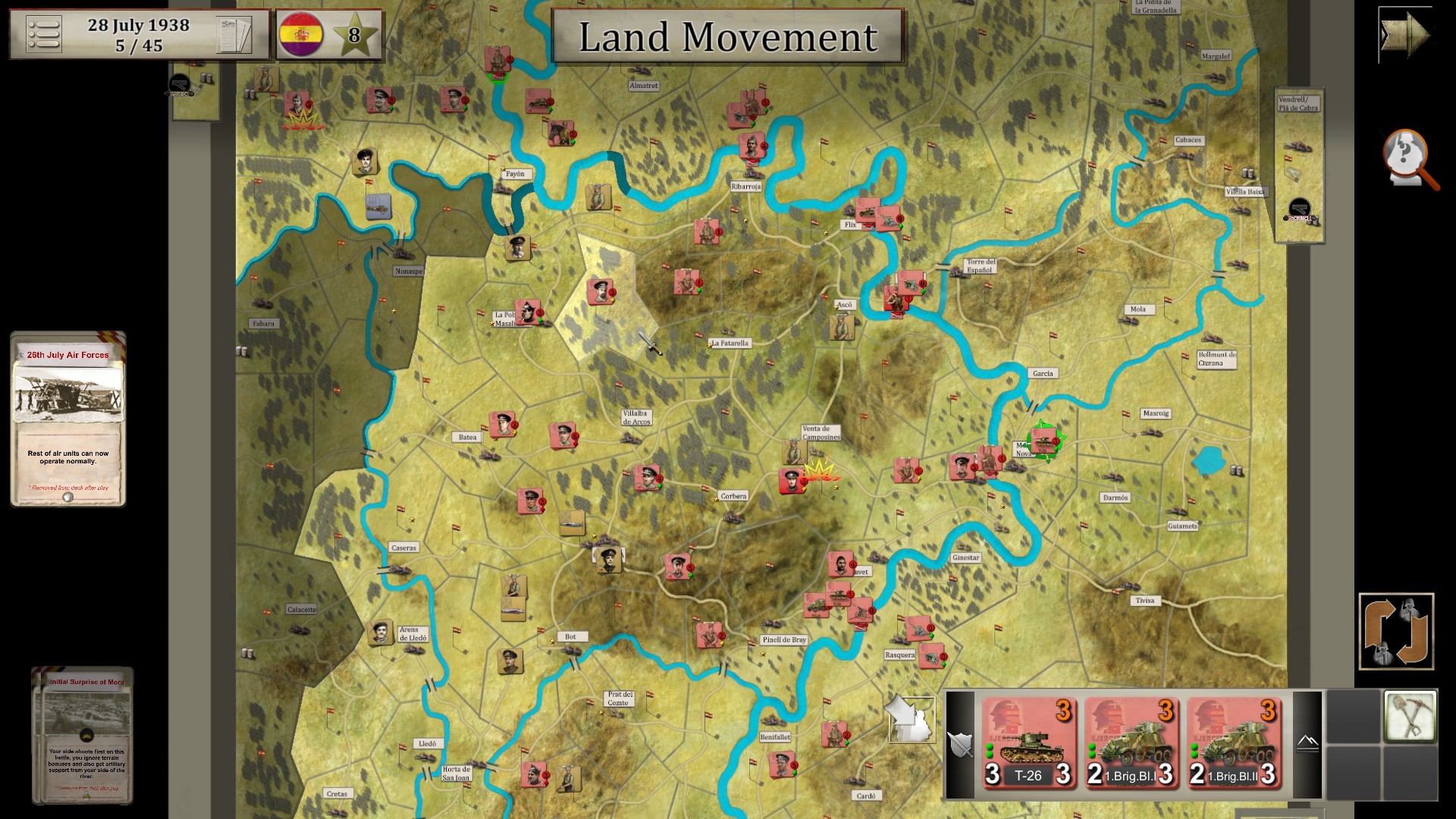 B4S utilizes the extremely supple Wars Across the World engine. This is both good and bad news. Those with experience of Strategiae's era-hopping, module-festooned curate's egg, won't be fazed by the rudimentary training facilities (an embedded manual is the sole source of tutelage) or caught out by irritating mechanical quirks like the absurd way the game rejects attack orders if unit stacks are accidentally dropped directly on an opponent's stack rather than on a patch of empty terrain nearby. Those without WATW experience will need to bookworm and experiment for an hour or two in order to learn a system that makes the AGEod one it superficially resembles, look slow and inscrutable in comparison. 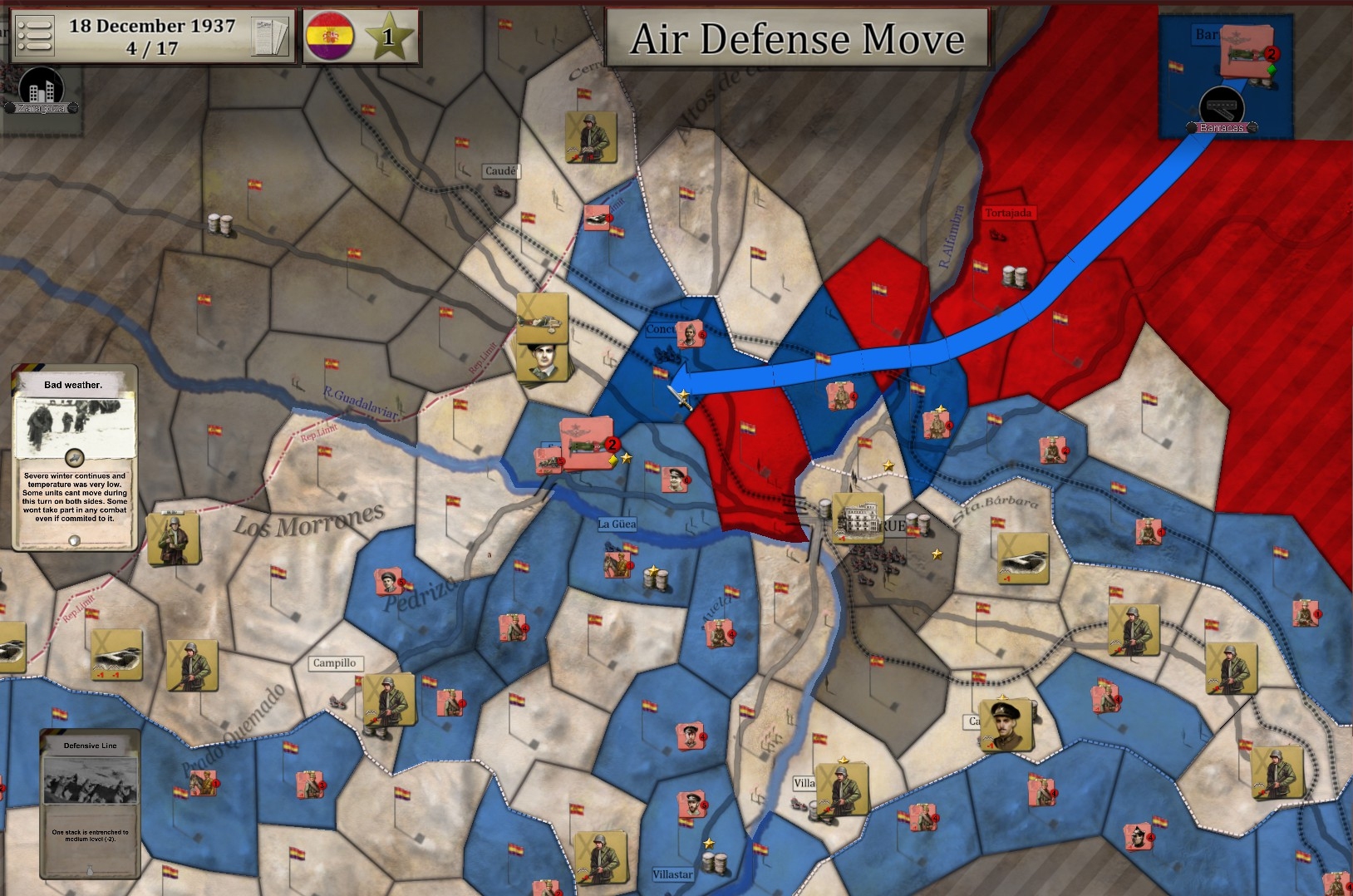 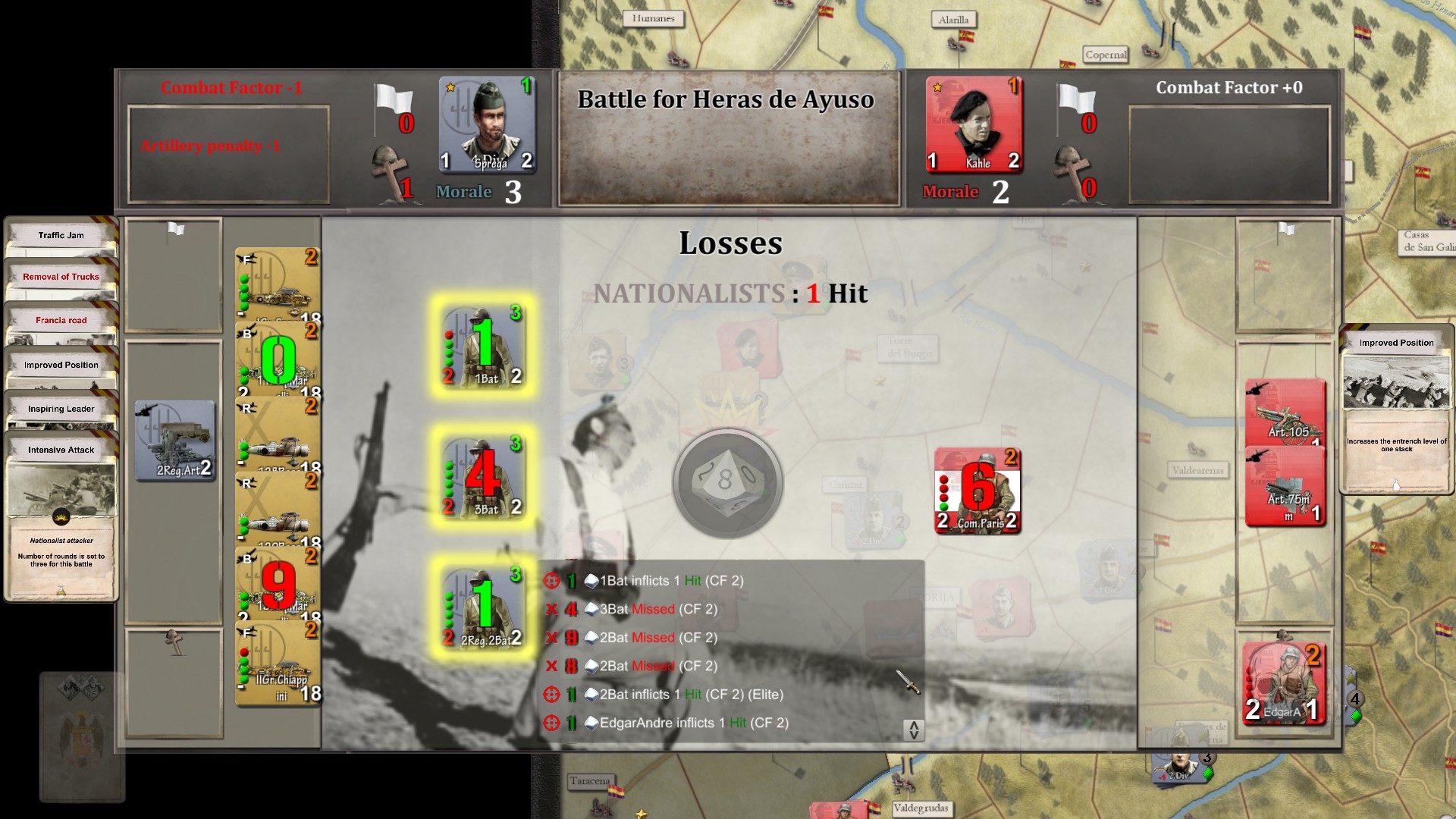 Excessively large counter stacks (infantry counters represent battalions) can't enter certain terrain types. More importantly, leaderless stacks can't initiate combat. When clashes occur, they are usually two-round simultaneous affairs tactically nuanced with card play. Every participating unit gets to roll a single number-adorned pentagonal trapezohedron in each round. If the result is equal to the roller's modified* Combat Factor (the number in the bottom lefthand corner of the counter) an opposing unit skedaddles. If the result is lower than the roller's modified Combat Factor, then an opposing unit sheds a strength step. Battles are seldom bloodbaths. Stalemates, automatic retreats, and slow abrasion are far more typical and B4S is all the better for it.

*Leaders, terrain, and artillery and armour imbalances can impact a unit's chance of drawing blood. 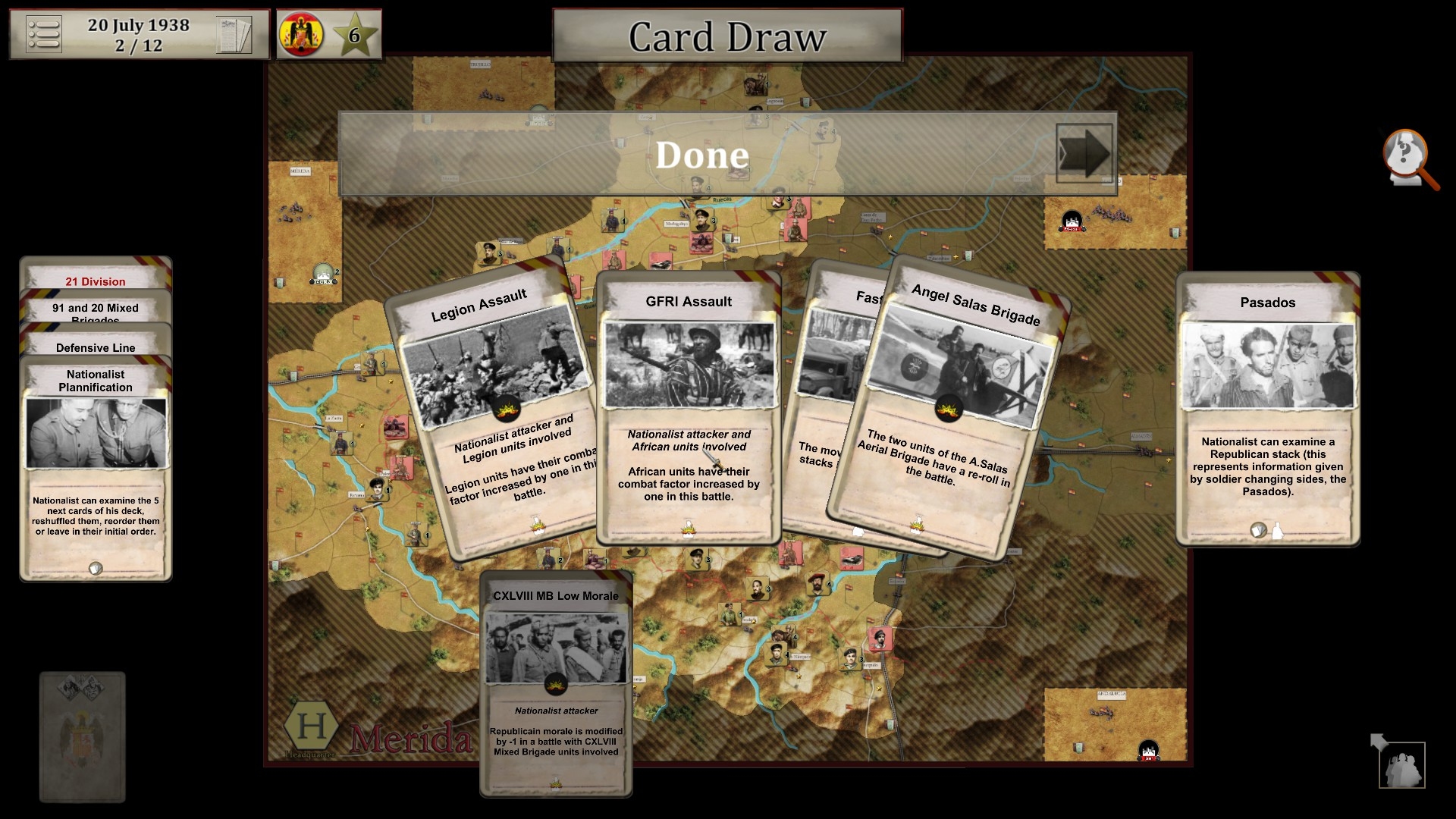 WATW modules rely heavily on cards to inject historical flavour and recreate battle peculiarities impossible to sim with the basic ruleset alone. B4S is no different. Nestling in semi-scripted decks (the positions of reinforcement cards aren't completely random) well-stocked with generic cards like “Forced March” (Units in a stack of your choice get an extra movement point) “Intensive Attack” (A battle of your choice is extended by one round), and “Entrench” (add an extra entrenchment level to any unit) are cards unique to specific scenarios. 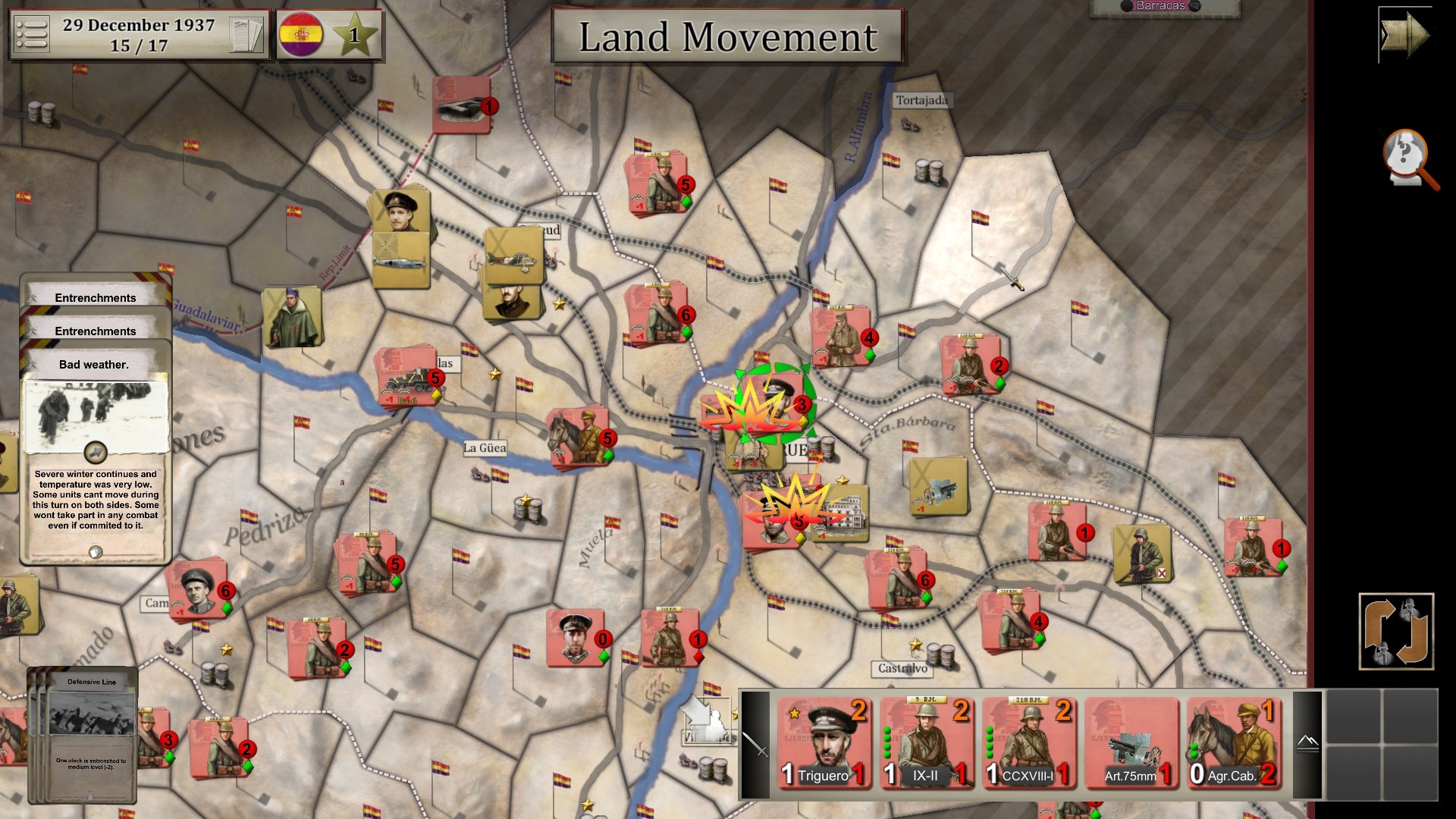 Shortly after erecting my first pontoon bridges in the game's massive 45-turn Battle of the Ebro centrepiece, those bridges were rendered temporarily U/S by the turn of the “Open Floodgates” card. The devious Nationalists had opened the dam upstream. During Teruel 1937, the succession of “Bad Weather” cards that immobilised random elements of my army with snow drifts and depleted others with frostbite and exposure, meant I rarely got to use all of my besiegers in the same turn. The custom cards, along with carefully researched cartography and OOBs allow B4S to communicate history without recourse to reams of verbiage. What a pity the painstakingly cultivated historical feel is often undermined by a mediocre AI and flattering victory conditions. 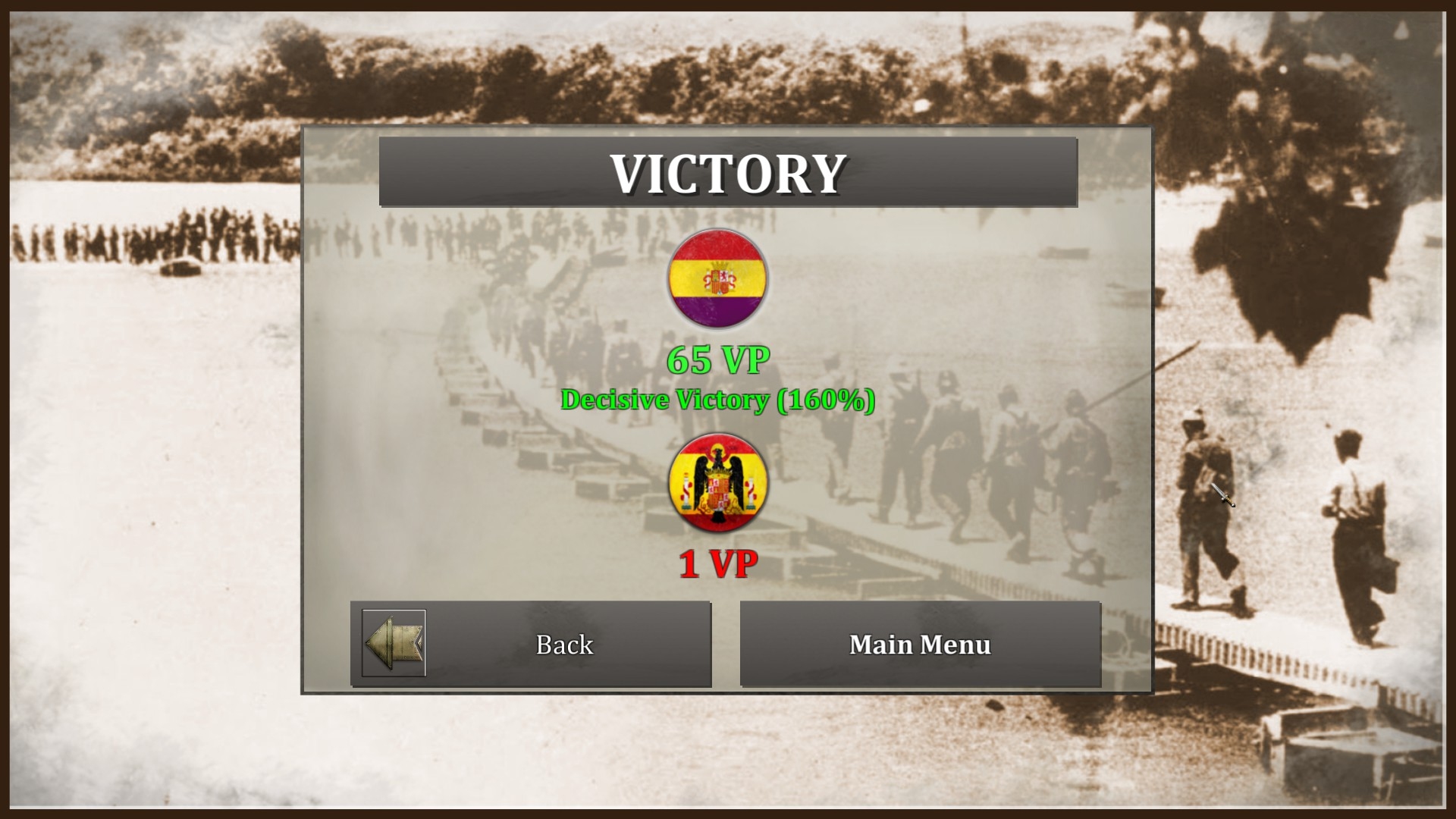 B4S is currently a member of a pretty select club: wargames in which I've yet to taste defeat. Not having tried all four scenarios from both sides, it's not impossible that a licking awaits me somewhere, but judging from what I've seen so far, I fear the game's failure to uphold clause 2 of the Difficulty Compact is total. My succession of disagreeably comfortable victories owes as much to difficulty settings that fail to fulfil their remit as lacklustre AI. Instead of giving the computer extra units or a helping hand in combat, the game's 'Expert' difficulty level merely reduces the amount of randomness in its decision-making. In theory you get a smarter opponent. In practise its hard to discern a difference. 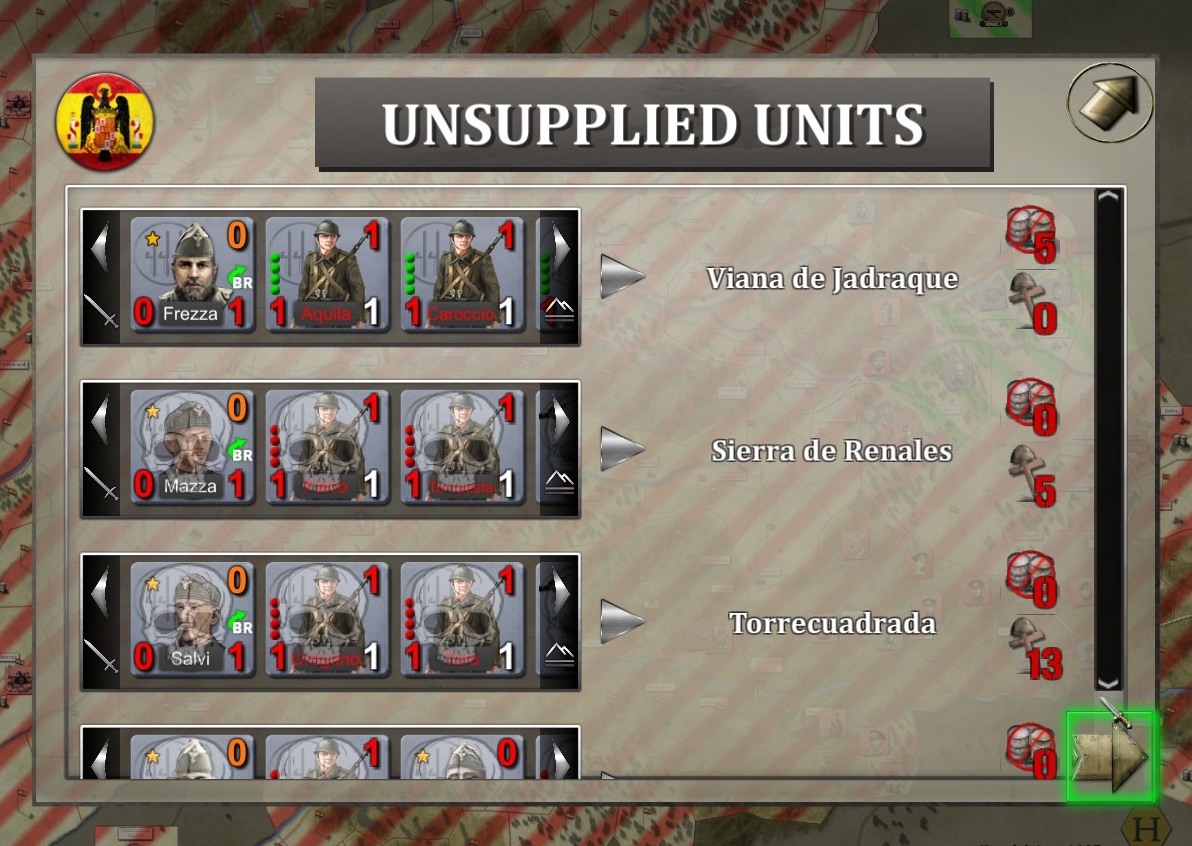 The most challenging WATW scenarios tend to rely on imbalance and canny map design for their challenge. While designer Miguel Santacruz seems to understand how to use cartography to disguise AI weaknesses (For example he provides plenty of supply sources so computer controlled forces are less vulnerable to death-by-pocketing) he seems unwilling to build the kind of lopsided scenarios Strategiae's AI needs in order to have a fighting chance of prevailing. 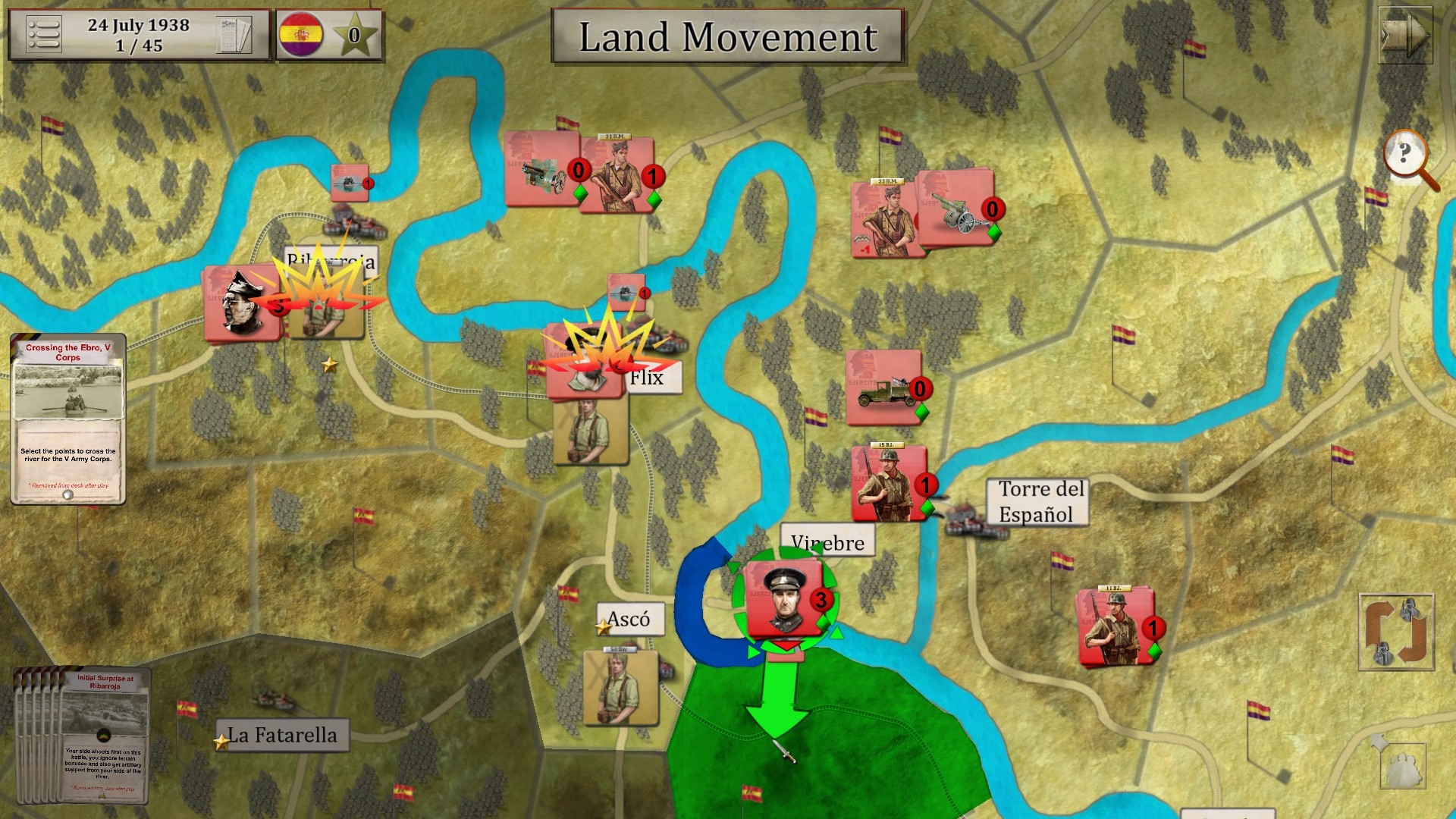 All four scenarios are diverting and capable of furnishing sticky moments and local reversals, but the jeopardy is spread far too thin for this reviewer. I played the Republicans in the spectacular (WATW engined scraps don't come any bigger) Battle of the Ebro in my last game and for the first 15 or so turns the action was genuinely gripping. We surged across the titular river in four places using boats and pontoon bridges. Bridgeheads were established and expanded. The surprised and outnumbered fascists recoiled westward, until bolstered by reinforcements that included the Bf 109s, Stukas and Ju 52s of the Condor Legion. Anticipating bruising counterattacks, I dug in, carefully positioning armour at vulnerable points. Thirty turns later, although I'd had to deal with a few halfhearted enemy thrusts, those bruising counterattacks had failed to materialise. Once again the AI's listlessness - its lack of coordination and sense of purpose - had handed me victory on a plate. 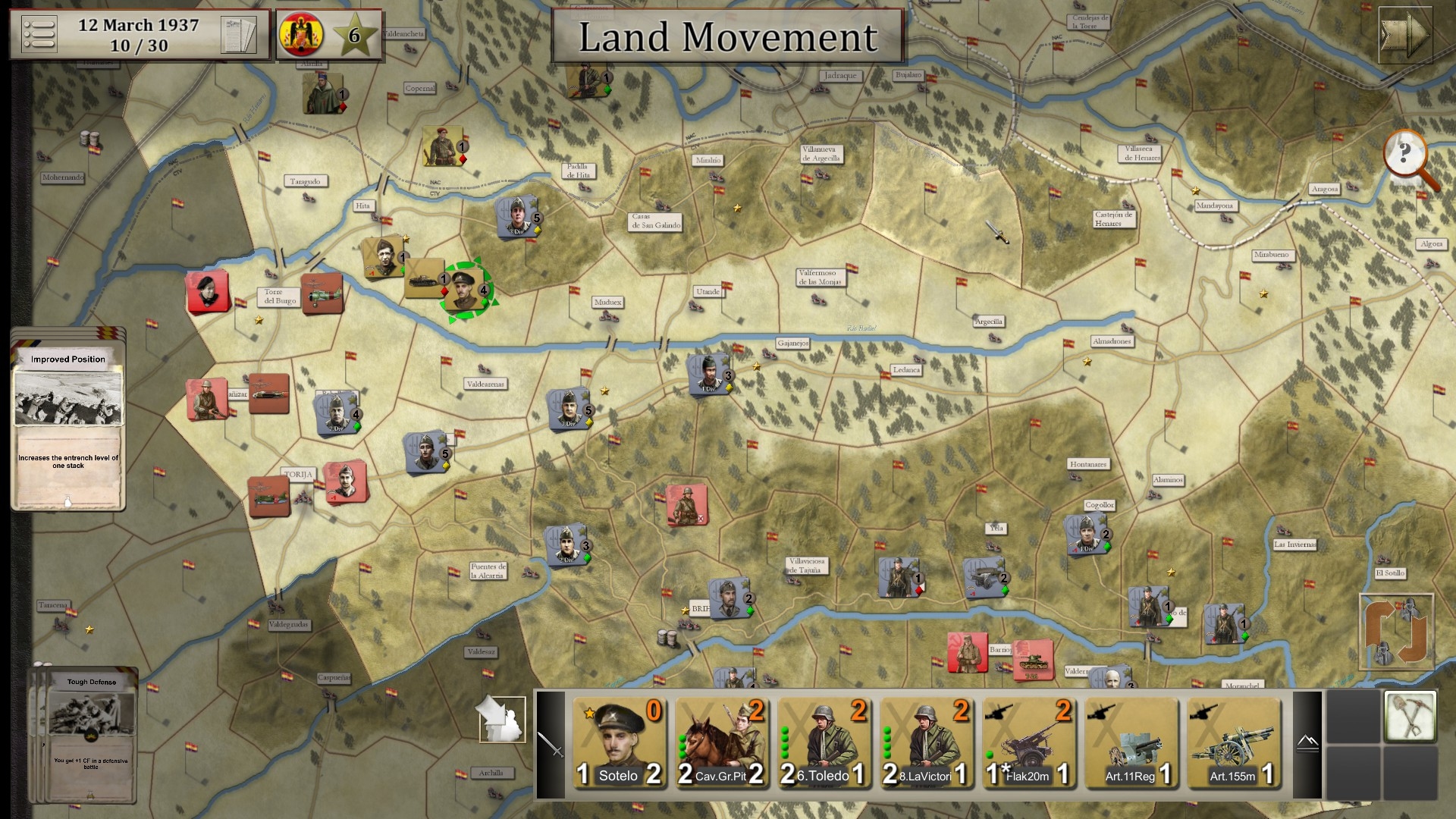 I feel for Miguel - B4S's indifferent AI and odd approach to difficulty settings are not his fault - but feel he could and should have done more to minimise their impact. Separate Republican and Nationalist versions of scenarios with victory conditions loaded to ensure challenge for the human player and a helping hand for the silicon one, should have come as standard. I'm grateful to B4S for expanding my knowledge of the Spanish Civil War and encouraging me to reread Laurie Lee's A Moment of War, one of the best things to emerge from the conflict, but until scenarios are tweaked I can only recommend B4S to PBEM or hotseat wargamers, or solo players in need of a vigorous ego massage.