One hundred and forty years ago today, colonial loose cannon Henry Bartle Frere singlehandedly started the Anglo-Zulu War. By the time London got wind of what was happening, the invasion of Zululand was well underway. Frere, the High Commissioner for Southern Africa, hoped that a quick victory would bring his dream of a British administered confederation of South African states a step closer. He hadn't reckoned on the martial prowess of King Cetshwayo's impis or the ineptitude of commanders like Lord Chelmsford. He hadn't realised that removing one obstacle to confederation might strengthen and embolden another.

Anyone wishing to mark this anniversary by recreating one of the Anglo-Zulu War's closer clashes on their microcomputer has a number of options. Over the past four decades Isandlwana and Rorke's Drift titles and mods have emerged at regular intervals. There have even been attempts to turn foregone conclusions like Ulundi into engaging diversions. 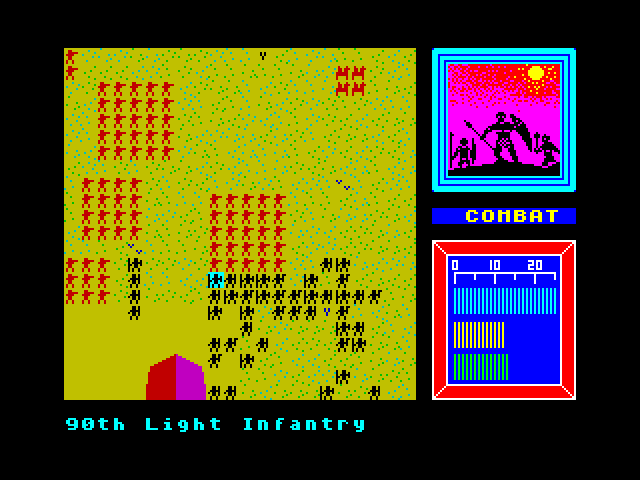 The sub-genre includes some gallant efforts but only one title I'd describe as essential and ironically that acme is a cardboard interloper. 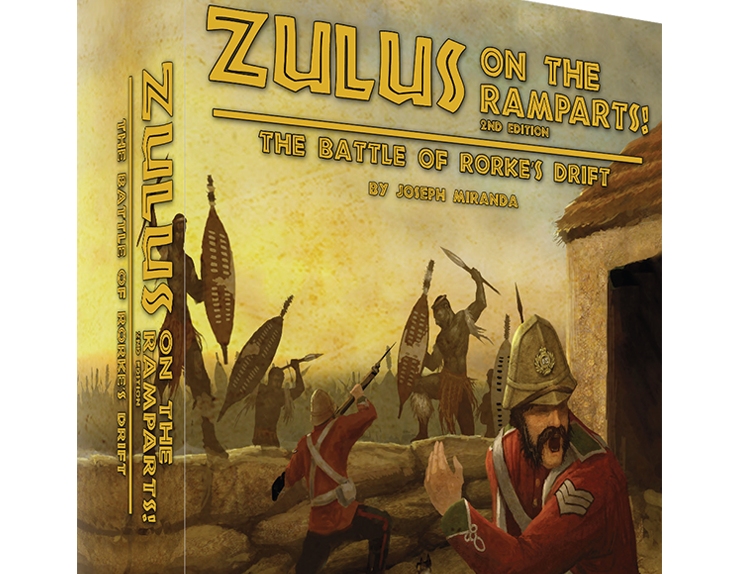 Thanks to Tabletop Simulator and Tabletopia, Joseph Miranda's drama-stuffed solitaire board wargame Zulus on the Ramparts! is now a practical PC pursuit. 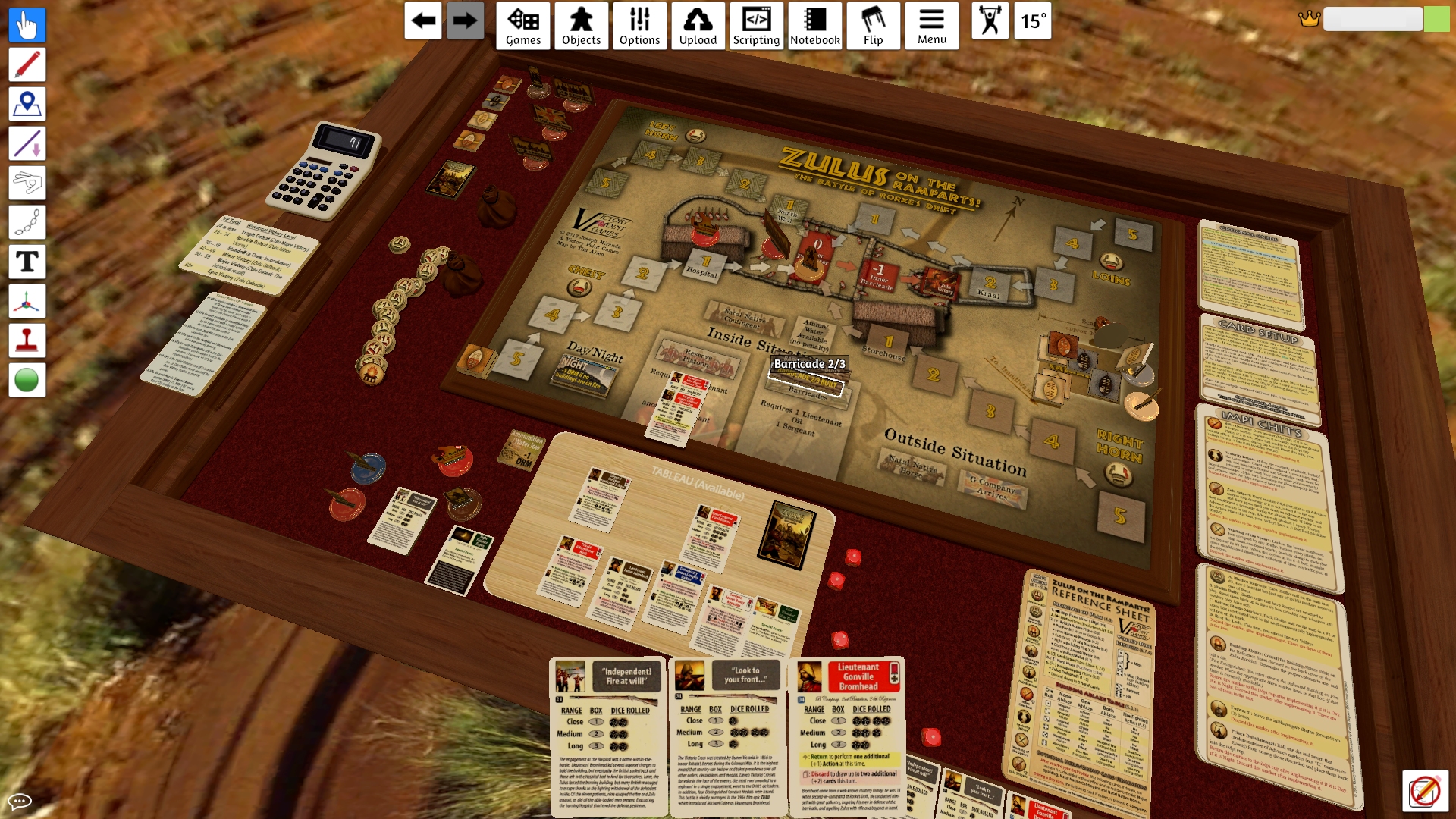 Because famous AZW engagements like Rorke's Drift and Isandlwana involved essentially static defences and most born-and-bred computer interpretations of them are mechanically conservative, the results can be somewhat bland, tactically speaking. What Miranda does that none* of his digital counterparts do, is focus on characters and ancillary activities rather than obsess about unit positions and morale levels. Realising that the most gripping depiction of the fighting at Otto Witt's isolated mission station is the 1964 movie Zulu, he uses that as his touchstone. 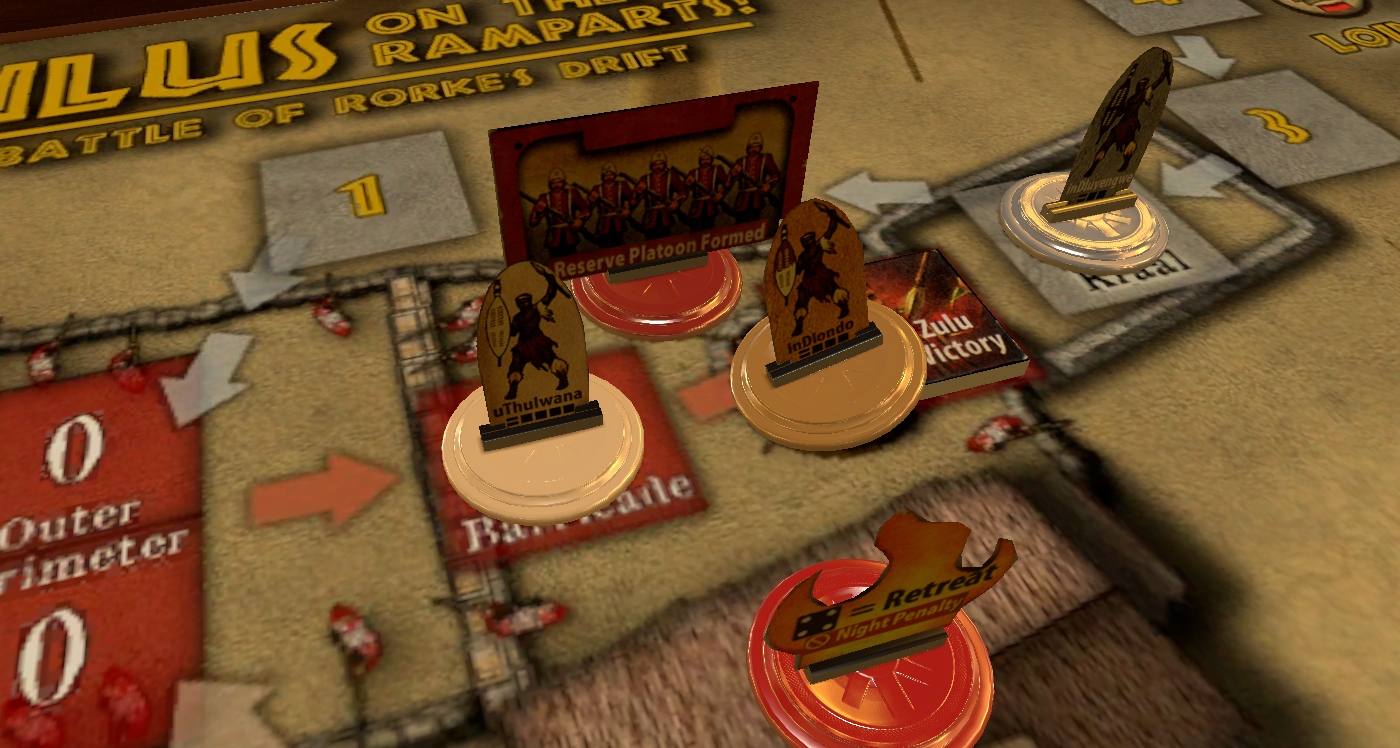 In the surprisingly cinematic Zulus on the Ramparts! Rorke's Drift and its environs are reduced to four converging 'tracks' – ribbons of squares along which the 'AI-controlled' impis advance and retreat. If one of the four impis – each a section of the famous buffalo horns formation – reaches the Zulu Victory counter in the centre of the board then it's all over for the pith-helmeted redcoats. Which impi or impis moves each turn is determined by a randomly selected chit. 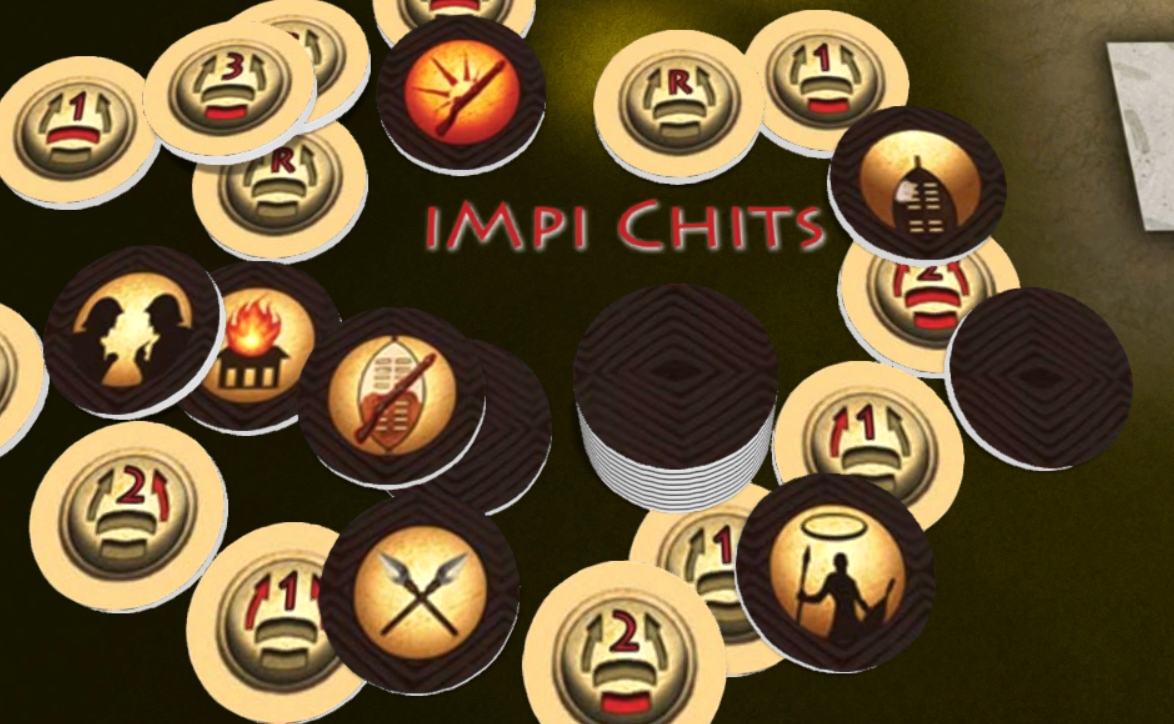 Daringly, the game abstracts British rank-and-file soldiery almost to the point of invisibility. During the fighting there's no meaningful indication of where in the compound the majority of Chard and Bromhead's men are, and no explicit tally of how many casualties they've sustained. It sounds like a recipe for horribly simplistic and vague action. What camouflages the brutal shorthand and ensures almost every turn contains a choice tactical conundrum is a sprinkling of event counters mixed in with the impi movement chits and a deck of cards that supplies the player with a steady stream of heroes and Zulu-whittling/worrying volleys. 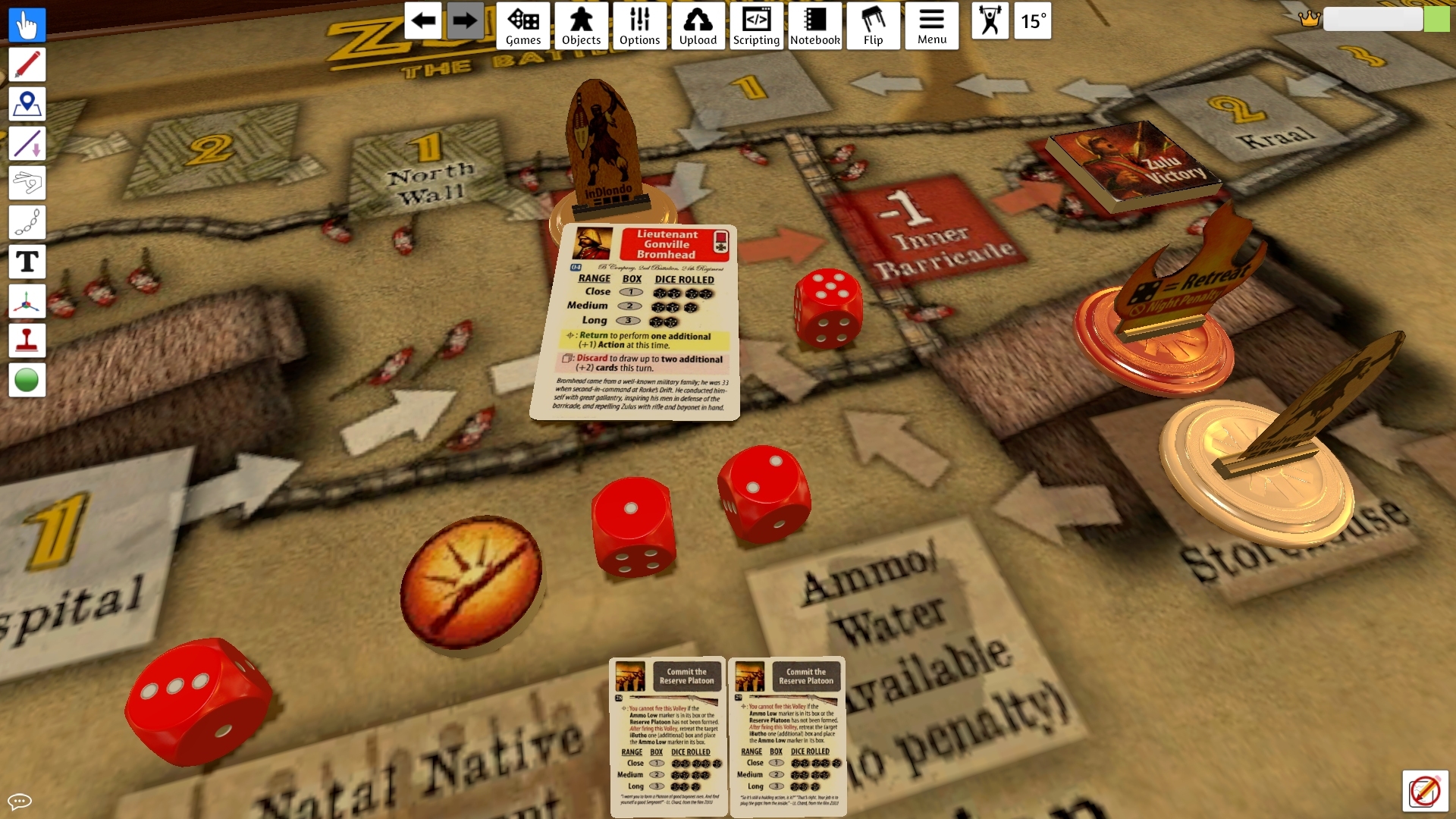 Most turns the plucked chit pushes assegai-armed attackers closer to their goal. Occasionally it causes them to retreat, pause, or commence sniping. Other chits ignite LoS-blocking/target-illuminating fires (night falls roughly halfway through each game), spark disruptive seniority debates between Chard and Bromhead, or cause hard-worked Martini-Henry rifles to overheat. 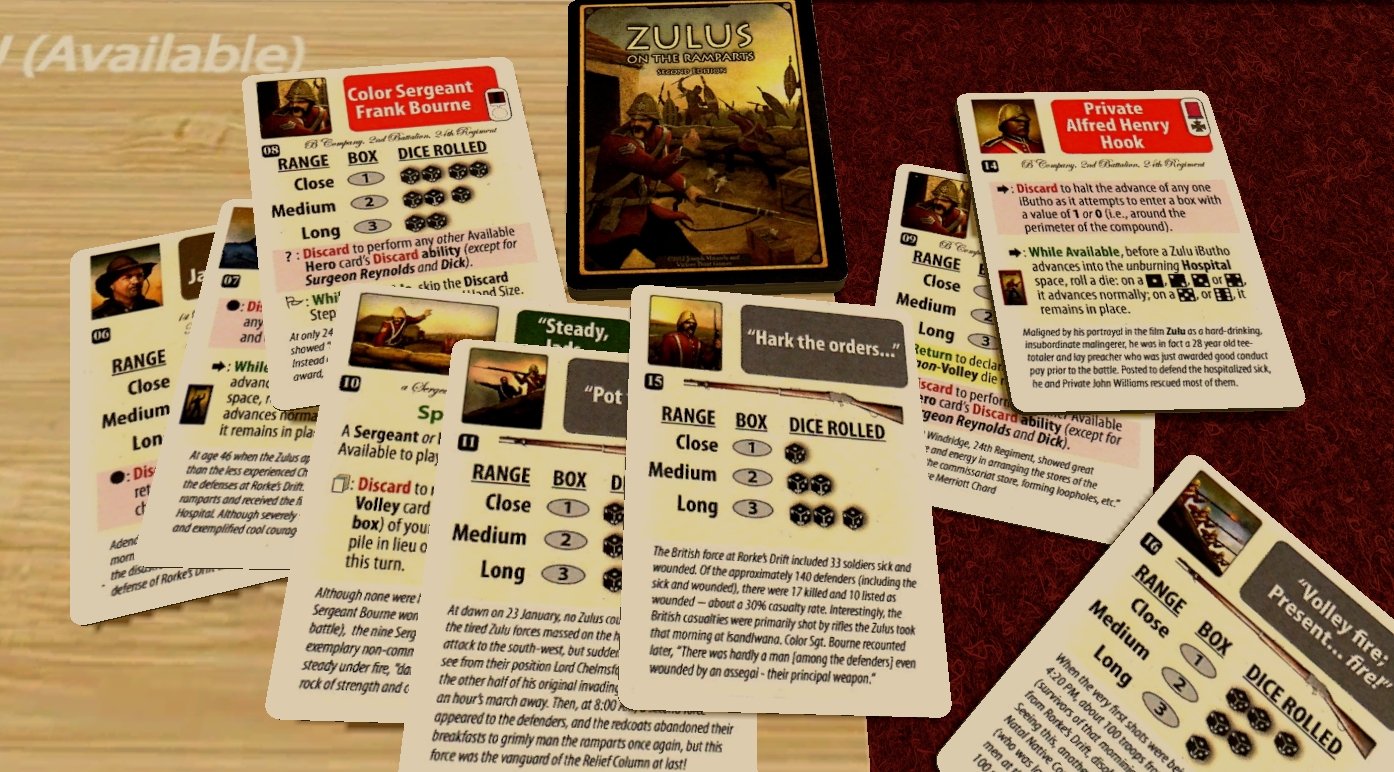 Containing two types of cards – heroes and volleys – the deck generally shrinks at a rate of one card per turn. Volley cards, each of which comes with its own range-linked strengths and weaknesses, can be played straight from your hand and have the potential to thin-out the vari-strength impis or push them backwards down their tracks. Hero cards are the game's most complicated and evocative elements and may, after they've been 'brought forth' (shifted from your hand to the 'Available' area) be employed in several different ways. 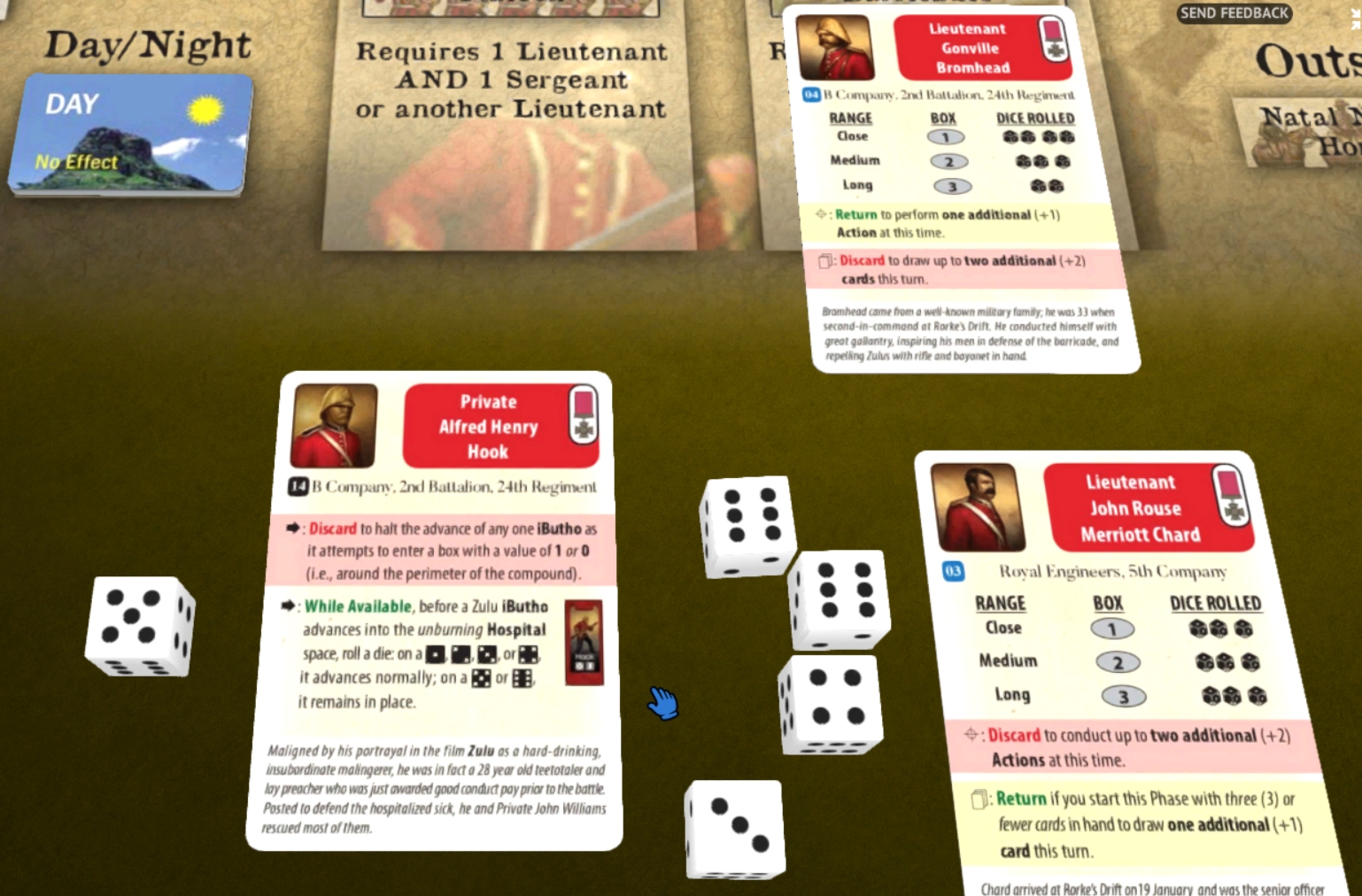 Most heroes are able to extinguish fires, oversee barricade construction (completed barricades move the Zulu Victory counter deeper into the compound) distribute ammo and water (depleted by some volley cards) and organise the reserve platoon (a prerequisite for using some of the most effective volley cards). They boast unique abilities too. Often you trigger these by returning the card to your hand (a mechanism that elegantly simulates the fact that a hero is temporarily occupied). If things get really desperate you can take the drastic step of sacrificing a character, permanently discarding them in return for a single 'free' volley or other boon. 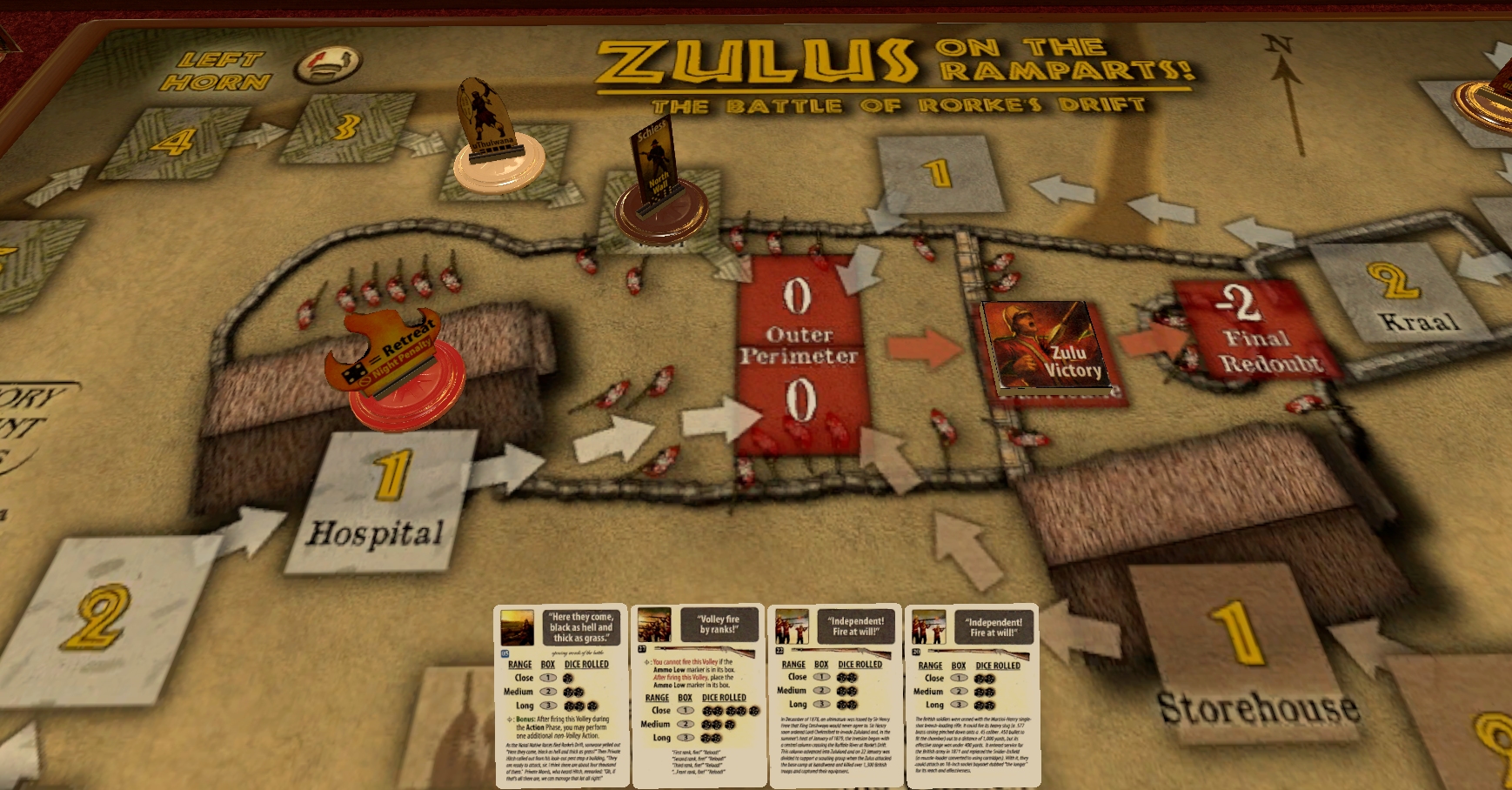 When 'brought forth' a few notables like Henry Hook and Ferdinand Schiess actually get to occupy particular board squares, their presence potentially blocking Zulu incursions via that track. 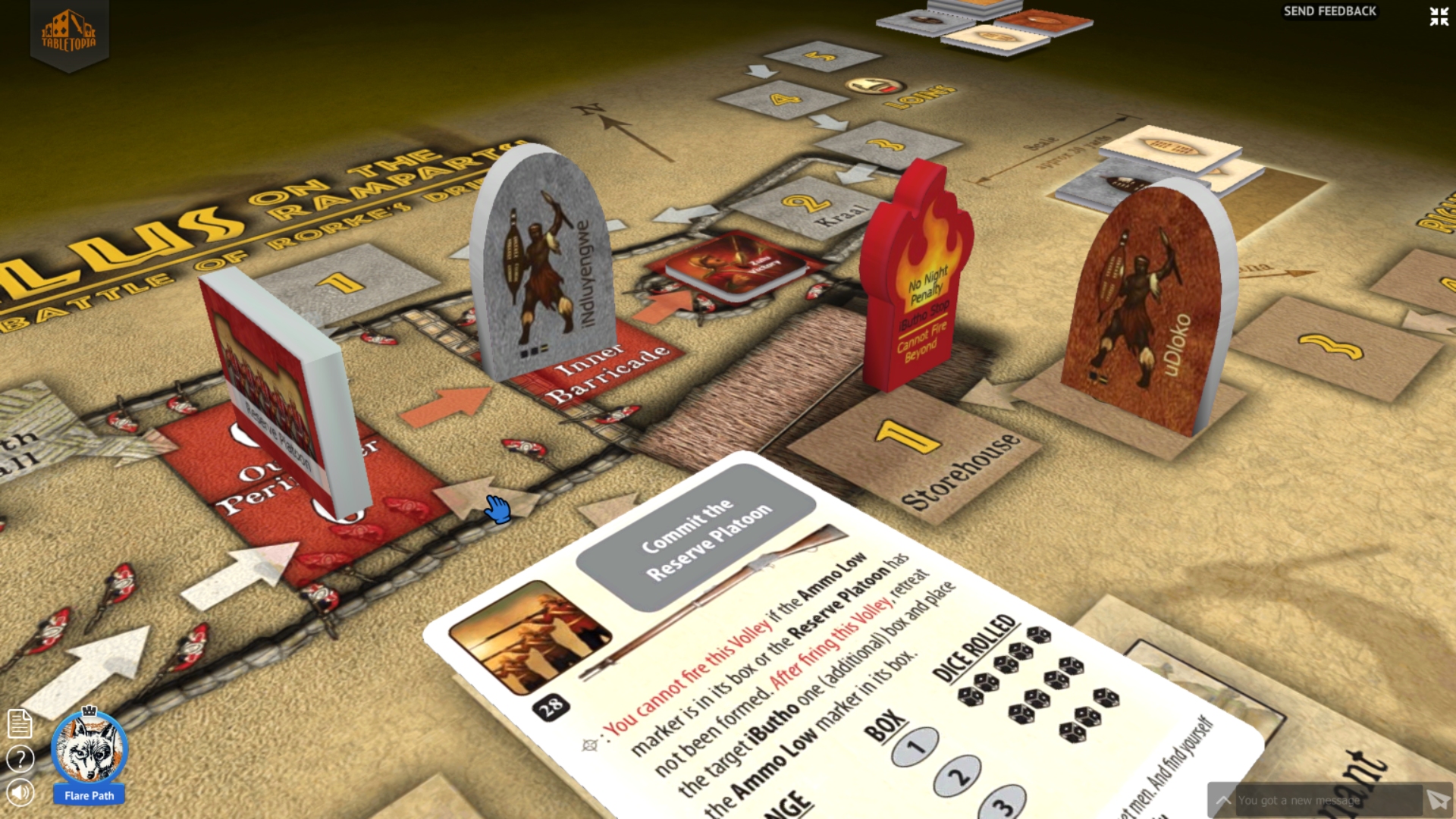 Combined, these ingenious, intertwined play mechanics can be mesmerising. Although it's unusual for a Zulus on the Ramparts! game to take longer than an hour, sessions invariably contain moments of high drama and force you to make multiple tough decisions. Where most AZW computer wargames are unidirectional... attritional... monotone, ZotR battles ebb and flow; there are lulls and crescendos. 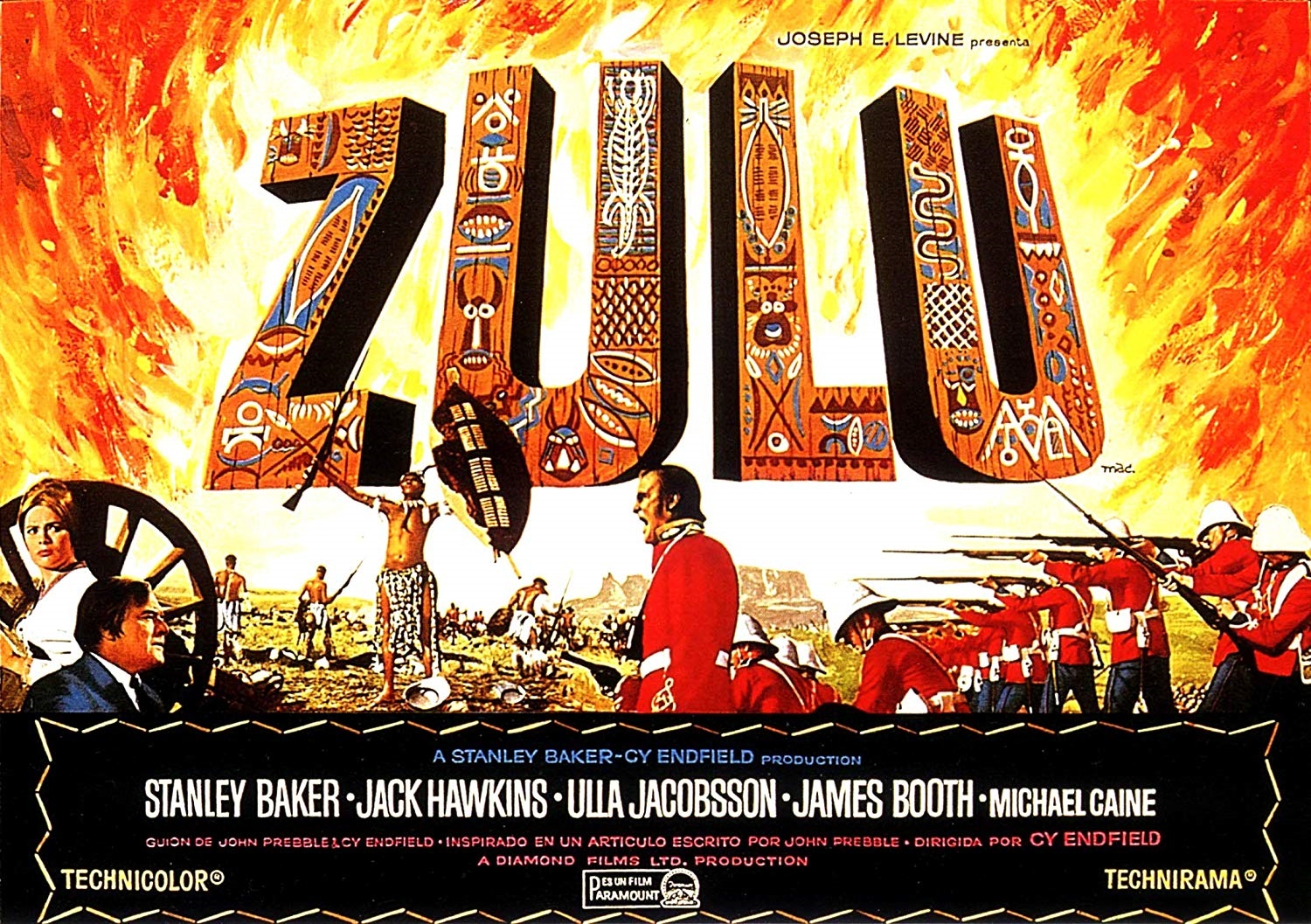 Obviously, a straight, no-frills board game port can't rival a Total War mod when it comes to spectacle or sound (there are no module-specific sound effects whatsoever in Tabletopia or TS) but assuming you're familiar with the classic Michael Caine/Stanley Baker film, you should be able to fill in the audio/visual blanks pretty effectively yourself. Thoughtful Miranda helps the movie memories flow by providing script snippets on many of the volley cards.

“Independent! Fire at will!”

Squint a little and there's Chard at the North Wall calmly felling enemies with his Webley... Hook wielding his bayonet in the blazing hospital... Schiess by the mealy bags causing mayhem with his crutch. Cock your head and you should be able to make out the wildfire crackle of Martini-Henrys, the beat of knobkerries drumming on taut cowhide shields. 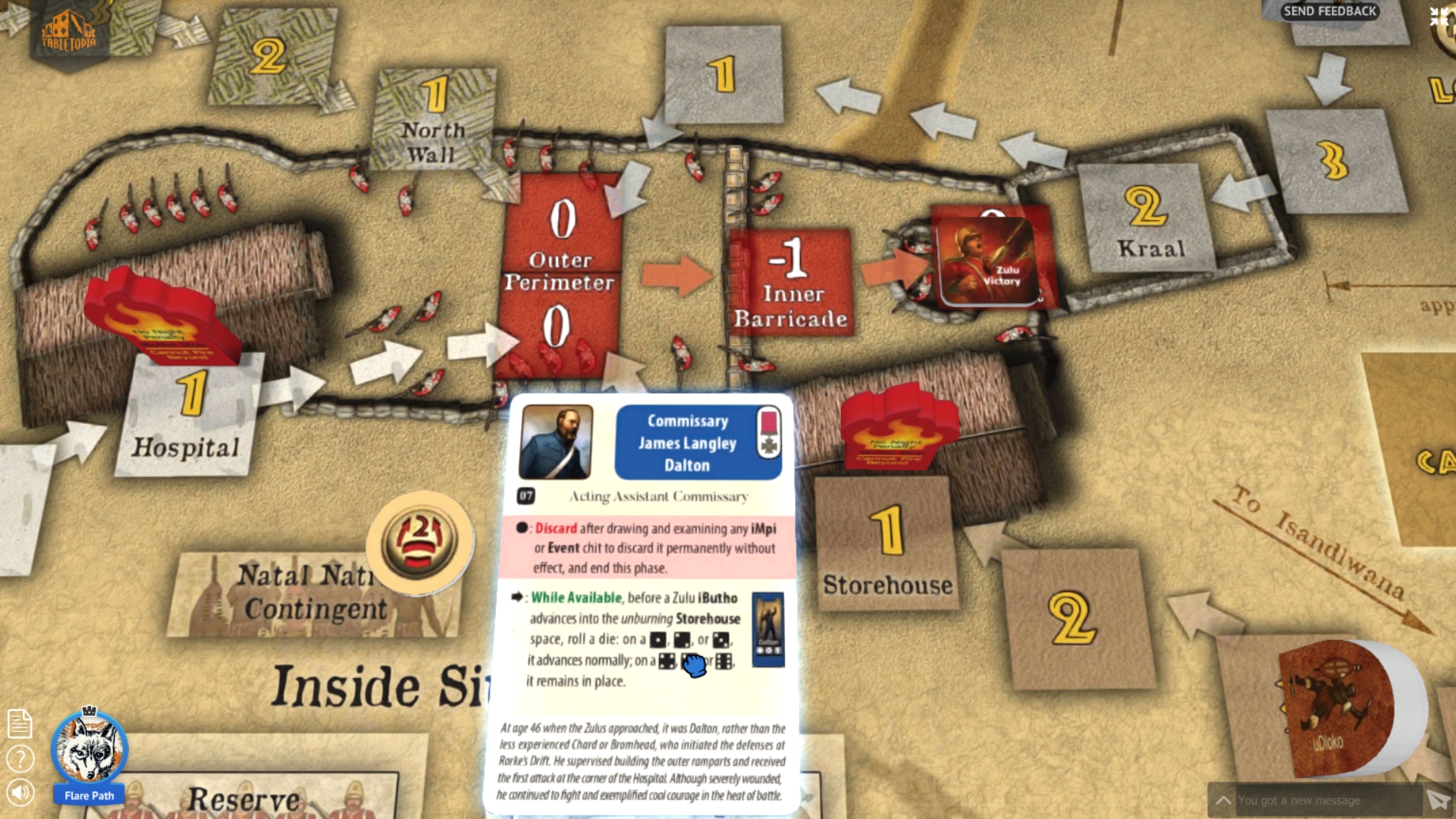 The two titles that allow ZotR to be played in an environment free of sticky fingers and stroppy felines both have their advantages and disadvantages. Opt for Tabletopia and once your month-long free trial expires you'll need to cough up five USD per month to keep playing. Disappointingly, ZotR isn't on Tabletopia's Steam DLC list – adjuncts that can be purchased outright with a one-off payment.

Defend the Drift via the £15 Tabletop Simulator and while you won't incur any ongoing fees you will have to source your own copy of the rulebook (easily done), put up with slightly fuzzier board and counter art (in this piece the darker images with red dice are from TS), and manually insert the 'night' and 'relief column' cards at the start of play (not a major inconvenience). I prefer Tabletop Simulator's controls to its rival's, and like the way reference tables are always close to hand in TS, but if you fancy trying ZotR without paying anything up front, the Tabletopia trial is the way to go. 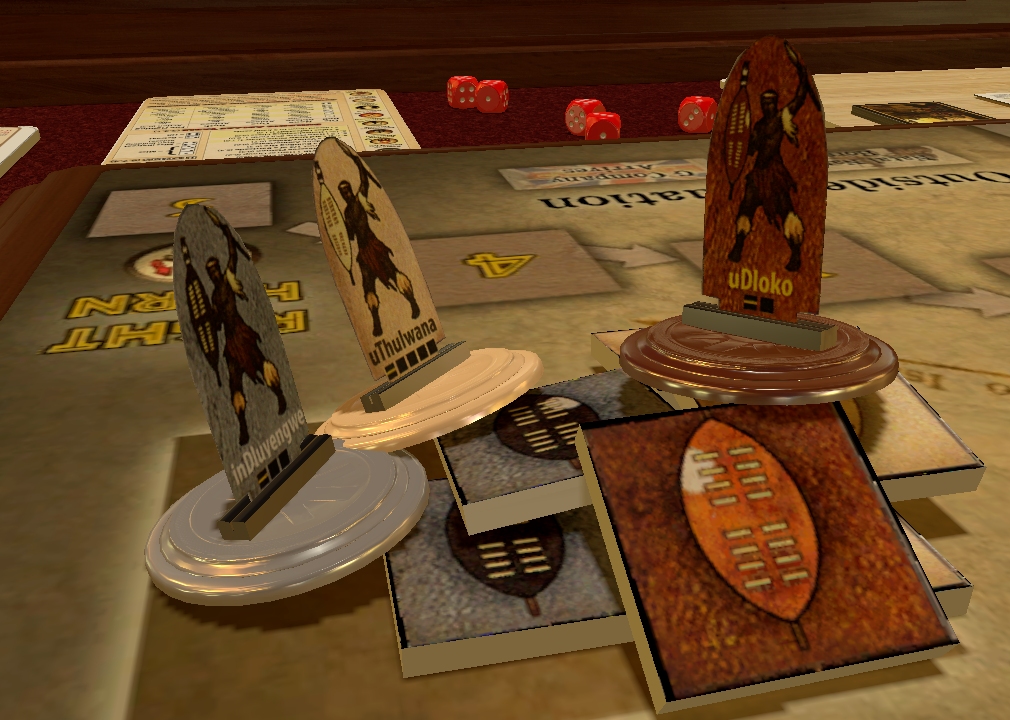 Whichever Zulus on the Ramparts! manifestation you plump for (Obviously, Victory Point Games' 41 USD cardboard version is also worth considering) you'll probably want to view a tutorial vid or two before facing Cetshwayo's forces for the first time. Watching a chap called Stuka Joe unleash volleys and hurl heroes into the maelstrom helped me get up to speed.