Setting your new combat flight sim in beleaguered 1940 Britain is both a safe and a risky choice. Because helpful individuals have been producing publicity material for BoB sims for almost 80 years, most potential customers won't need to peruse a feature list or read a preview to realise that you're offering them a recreation of an air battle in which the stakes couldn't be higher, the venue more bucolic, and the lead-spewing leads more charismatic. Release a few ravishing beta pics of sun-kissed Spitfire Mk 1s and your creation is sure to attract armchair aces the way an unescorted skein of Stukas attracts swarms of marauding Hurricanes.

Of course, the drawback of reprising BoB yet again is that a good few of those armchair aces will turn up with yardsticks tucked in their fleece-lined flight boots. Having played relatively recent Finest Hour treatments like Battle of Britain II: Wings of Victory and IL-2 Sturmovik: Cliffs of Dover, customers may have expectations your two-man studio is unable to meet. I'm certain Old Brown Dog Software were aware of this possibility when they decided to shift their focus from the WWI Western Front to the WW2 Garden of England just as I'm sure they will understand why I'm obliged to point out that Wings Over the Reich, though a solid solo sim with many likeable qualities, isn't a BoB2 beater or CLOD eclipser in every area. 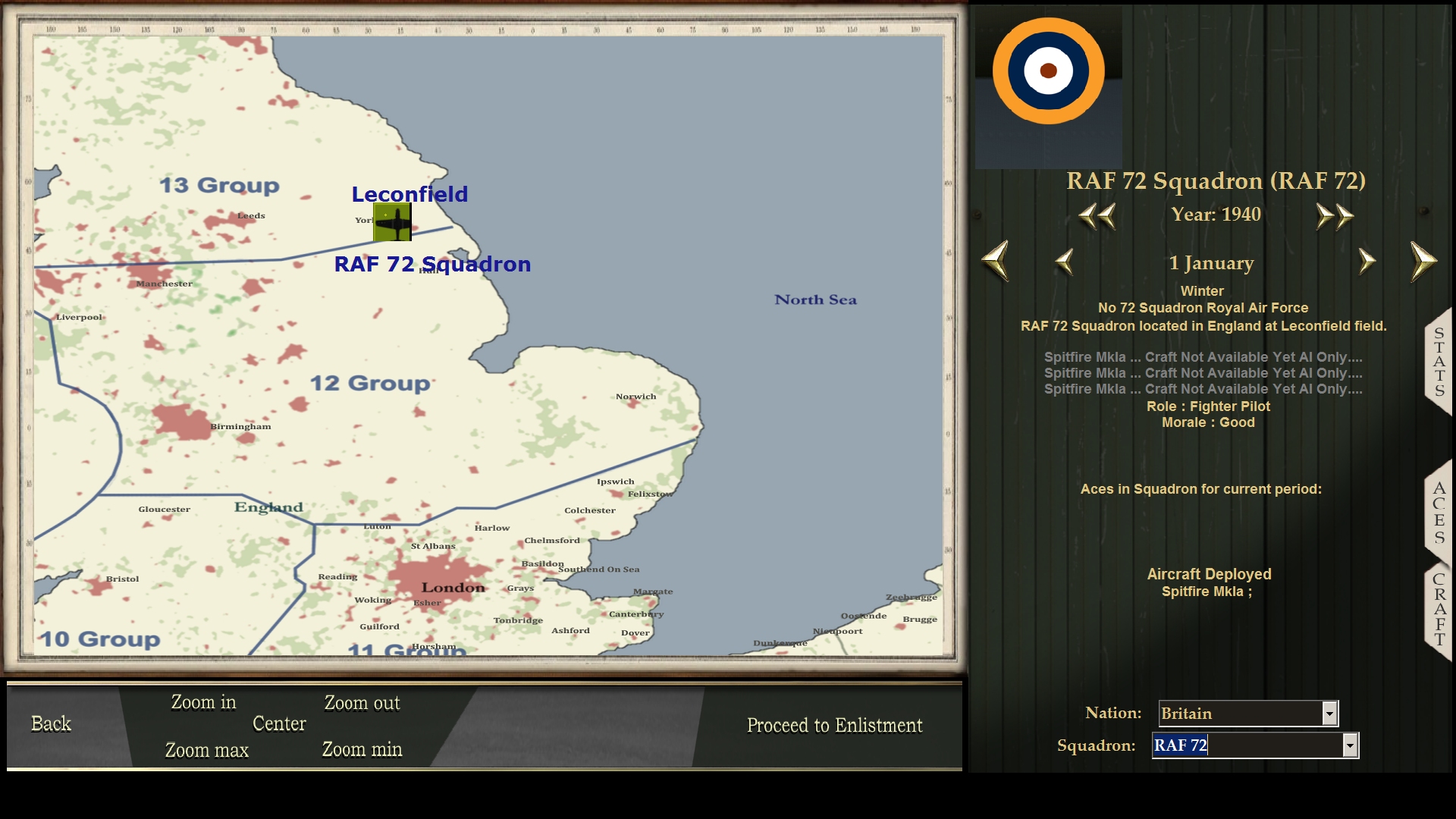 Titled with future plans in mind not in mocking reference to Goering's boast that Fighter Command would be defeated in four days, the $35, CFS3-based* Wings Over the Reich comes with two nicely crafted flyables (Hurricane and Bf 109), an impressive singleplayer campaign reliant on randomly generated sorties, and an unusually spacious map. In last week's column I hinted that I wasn't wholly satisfied with that map. Let me start by explaining my real estate reservations in a little more detail.

*There's no need to install Combat Flight Simulator 3: Battle for Europe prior to installing WOTR but the EULA assumes that you do own Microsoft's 2002 title. 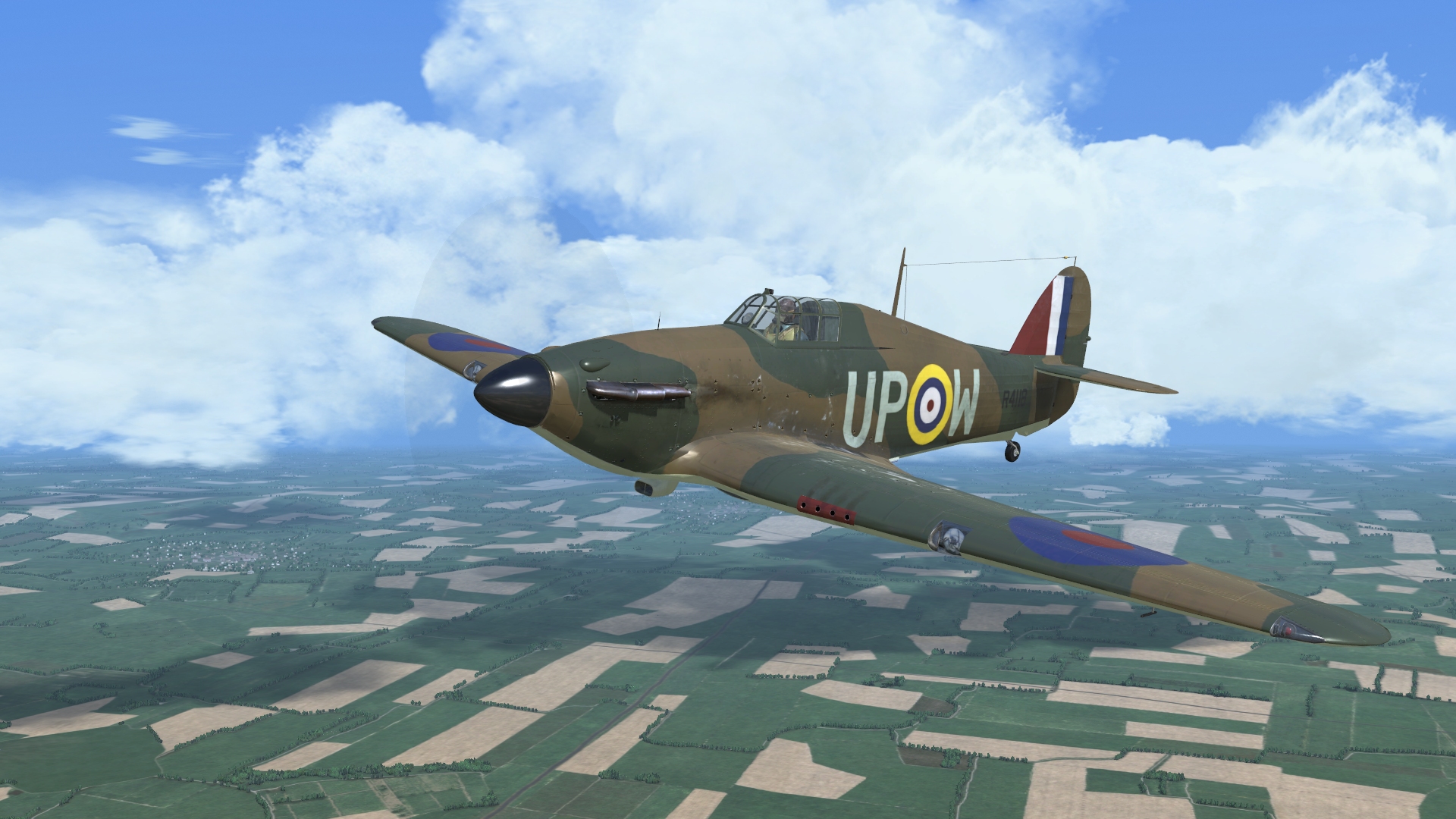 As screenshots like the one above eloquently testify, WOTR's scenery suggests Blighty magnificently. You hunt and sweat and daydream above a motley field patchwork that is quintessentially English. What irks me somewhat is that the pretty vistas aren't more faithful or useful. The distinctive filigree of railways, rivers, and roads, and the telltale shapes of forests and towns that should help player-pilots orientate themselves after the giddy gyrations of a dogfight are either absent or chased with an extremely blunt chisel. 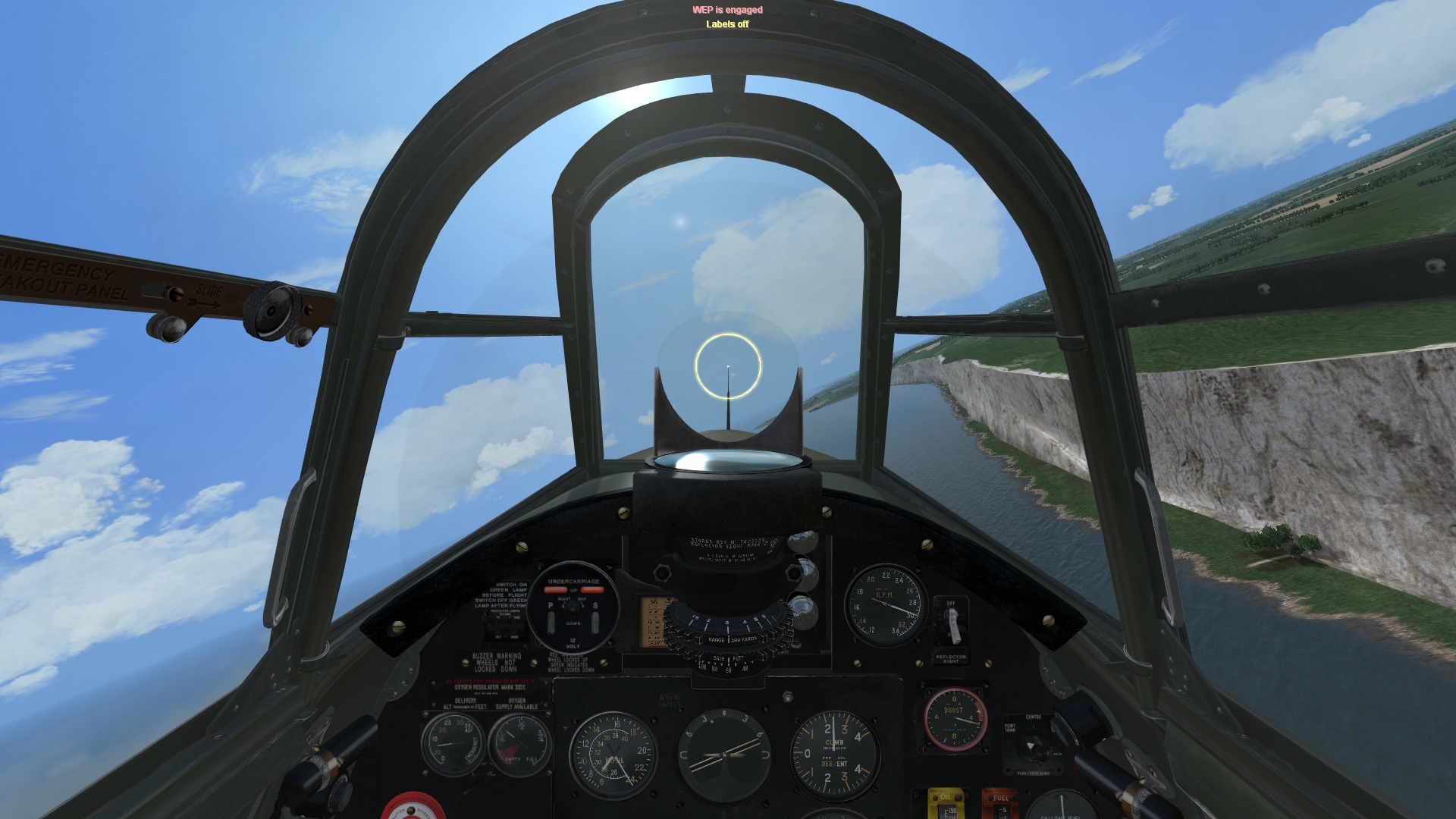 Some specific examples. In-game, that portion of the UK that I know best, central southern England, is missing its two most distinctive features, the New Forest and Salisbury Plain. Unbroken field textures extend over vast areas that really should be shrouded in trees, heather and gorse. My local Sector Station, the not unimportant RAF Middle Wallop, is represented with a generic airfield model and, thanks to relatively low-resolution elevation mesh and that primitive rail and road net, is surprisingly hard to locate without the help of toggleable terrain labels or the sim's woeful map. My ramblings over East Anglia, Kent, Sussex, and Surrey suggest the unhelpful crudity is countrywide. The natural ramparts around Dover are one of the few sections of coastline modelled in any detail. 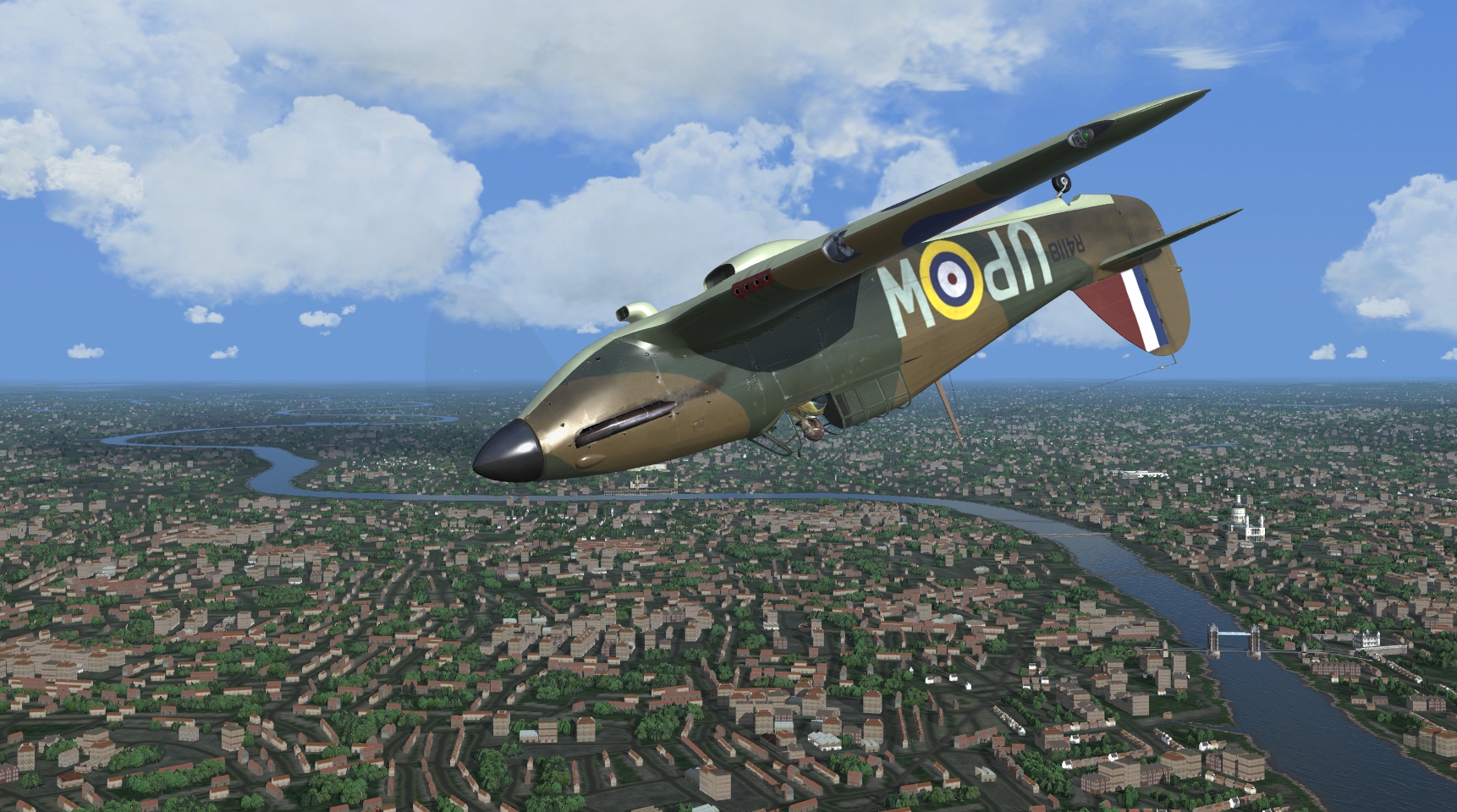 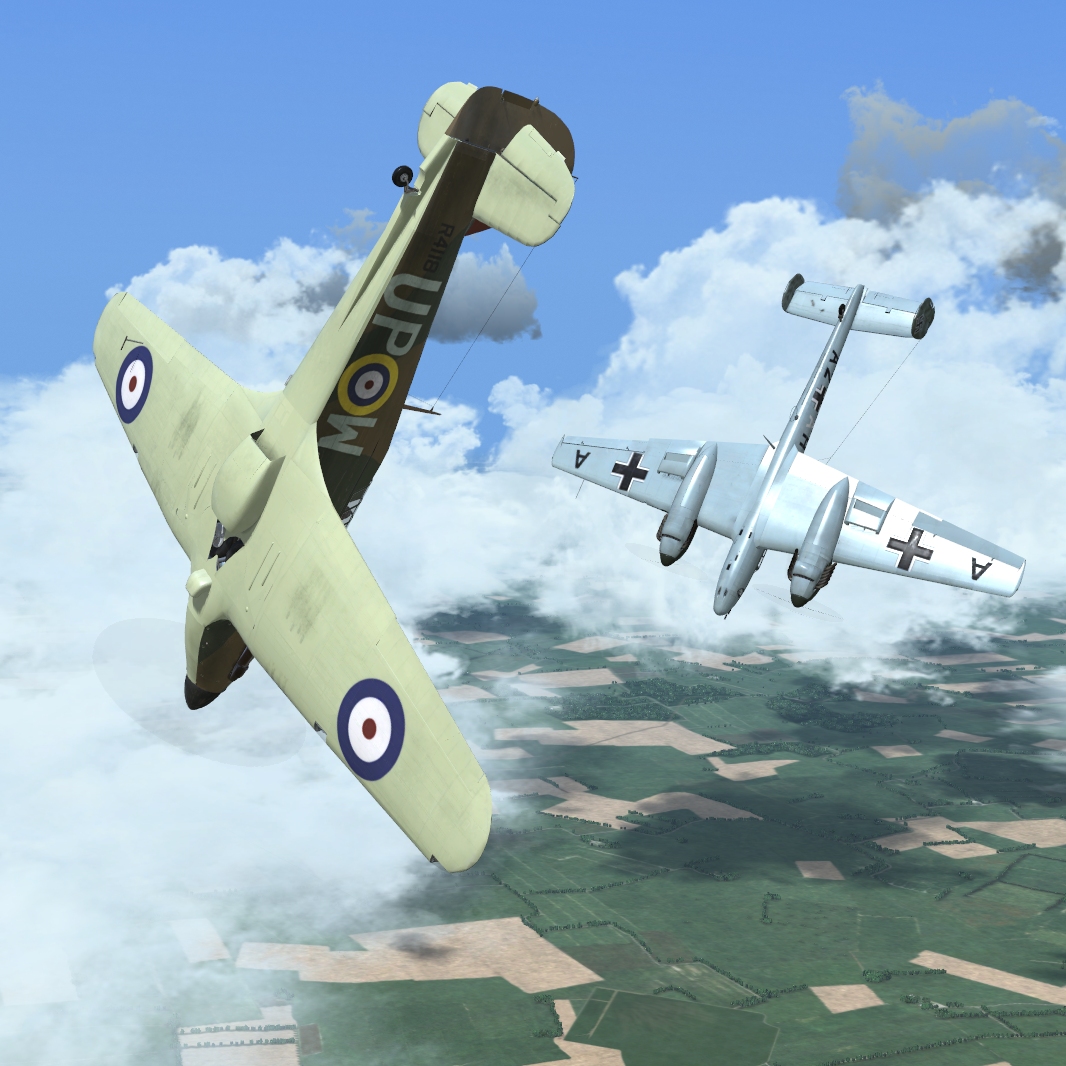 One of WOTR's most likeable traits is the liveliness of its snappers. More often than not AI-controlled fighter pilots fly and fight like people determined to make a difference and get home in one piece. While German bombers display improbable stoicism when under attack (Some weaving might be wise, Fritz, especially when you're heading for home!) the vast majority of my single-engined adversaries over the past few days have been as slippery as Elbe eels. As you'd expect/hope, Bf 109s seem to respect the Hurricane's superior turn rate, preferring to boom and zoom rather than endlessly orbit an imaginary mulberry bush. Zerstörers make good use of elevators during duels too. Tired of sim bandits whose idea of evasive action is a half-hearted mosey to port or starboard, and who refuse to run for it when damaged? There's a good chance you'll warm to WOTR.

A BoB emotion that this new release doesn't do is awe. I've yet to encounter more than a dozen enemy aircraft during a campaign sortie. The modest formations can be relied upon to produce  perspiration and, at times, panic, however they don't drop your jaw and smack your gob the way the massed ranks of droning Dorniers, Heinkels and Ju 88s do in BoB2. 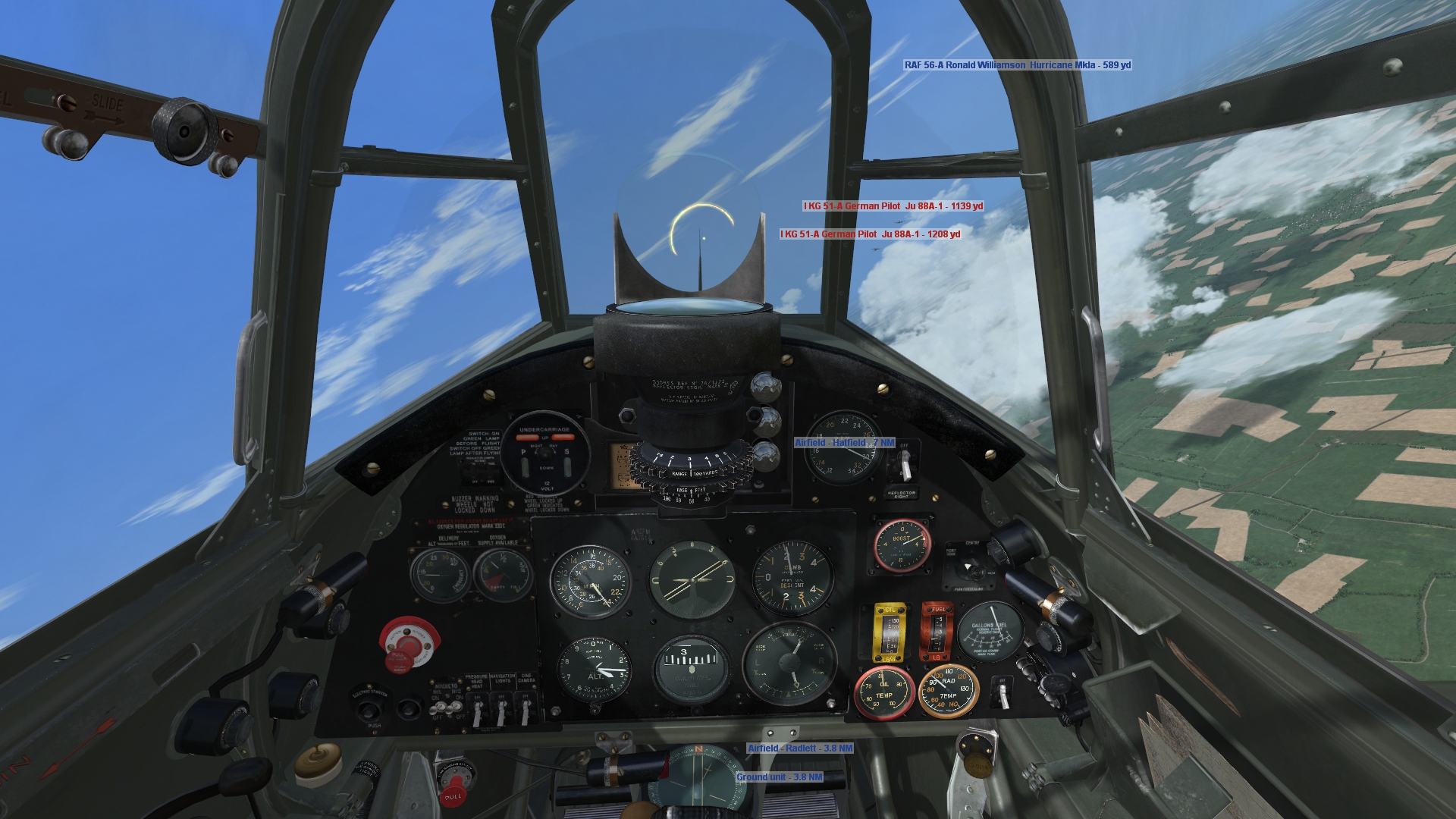 I'd describe the sim's flight dynamics as flattering. I imagine (but haven't actually checked) OBD have done their climb rate, stall speed, and spin characteristic homework diligently. What they haven't managed to do is breathe life into manoeuvres. At times I feel like I'm carving invisible aspic rather than turbulent air. The sense of buoyancy and greasiness that makes aviation in the likes of IL-2 Sturmovik: Battle of Stalingrad and DCS World so challenging and interesting just isn't there in WOTR. History books suggest the Hurricane – the aircraft I've spent 95% of my time in thus far – was a tolerant, biddable and wonderfully stable gun platform, but this tolerant, biddable, and stable? I suspect not. 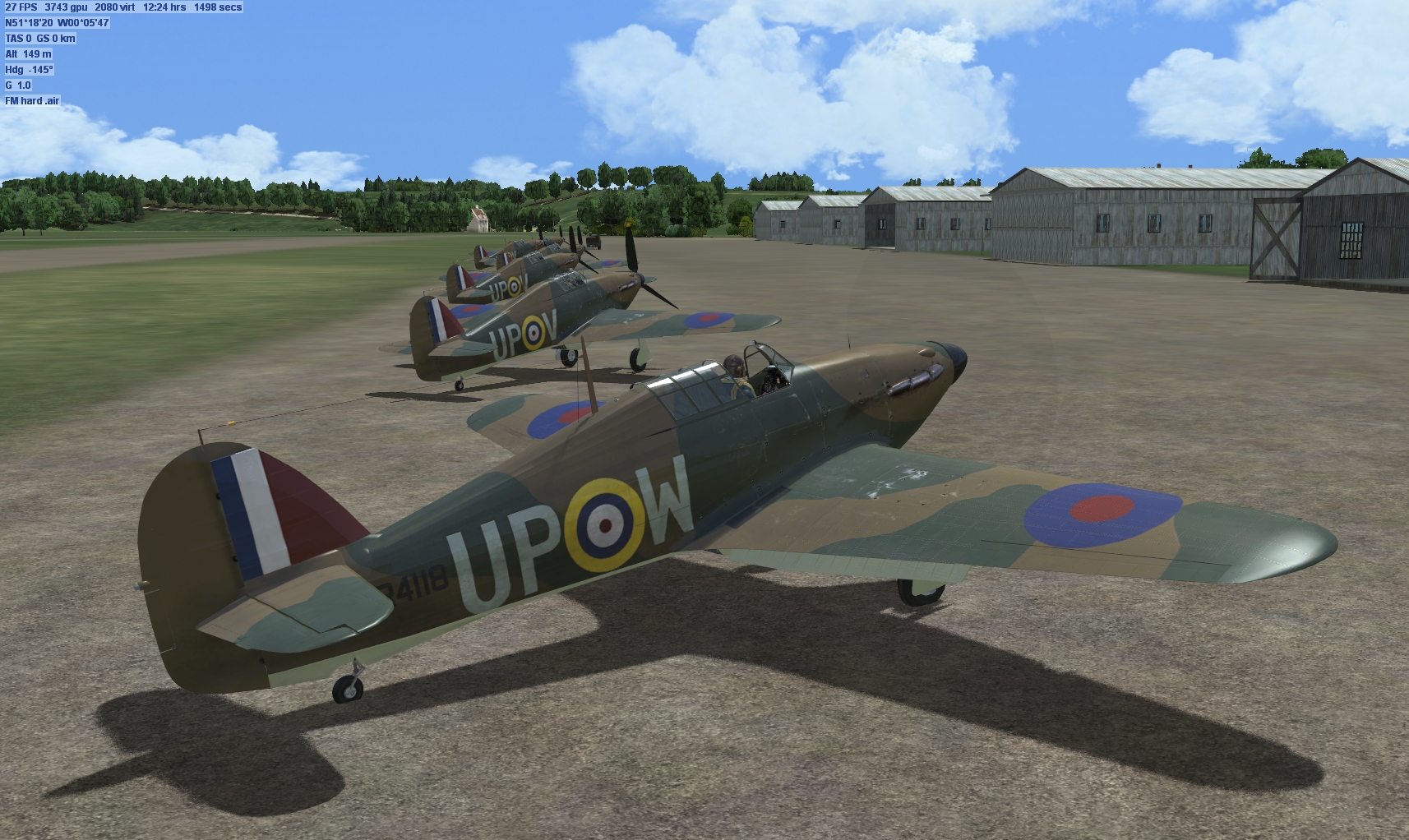 Ground handling feels similarly liberal, similarly old-fashioned. Smooth straight landings and take-offs, even in the narrow undercarriage Bf 109, are easy to achieve. My hairiest touchdown to date was a consequence of pleasingly deep damage modelling. Returning from a jaunt in which a  Bf 110 gunner had tried and failed to discourage me from chewing a wingtip off his mount, I discovered, close to home, that MG 15 emissions had scuppered my hydraulics. Repeatedly dabbing Shift and G (manual gear pump) eventually lit one of the green undercarriage bulbs on the panel but refused to illuminate the other. I got down safely but the landing was far from pretty.

Buying WOTR for its standalone scenarios or Quick Flight skirmish generator (there's no multiplayer) would be a bit like buying a Willys Jeep for its glove box. Wings Over Flanders Fields was designed around its singleplayer dynamic campaign experience and the sequel is no different. You begin by enlisting in one of 58 real squadrons with history-derived home bases, personnel, and equipment (obviously, only squadrons that flew Hurricanes or Bf 109s are available at present) and choosing one of five starting dates. The game then sends you on randomly generated sorties until the inevitable happens - you wind up in a casket or a convalescent home. 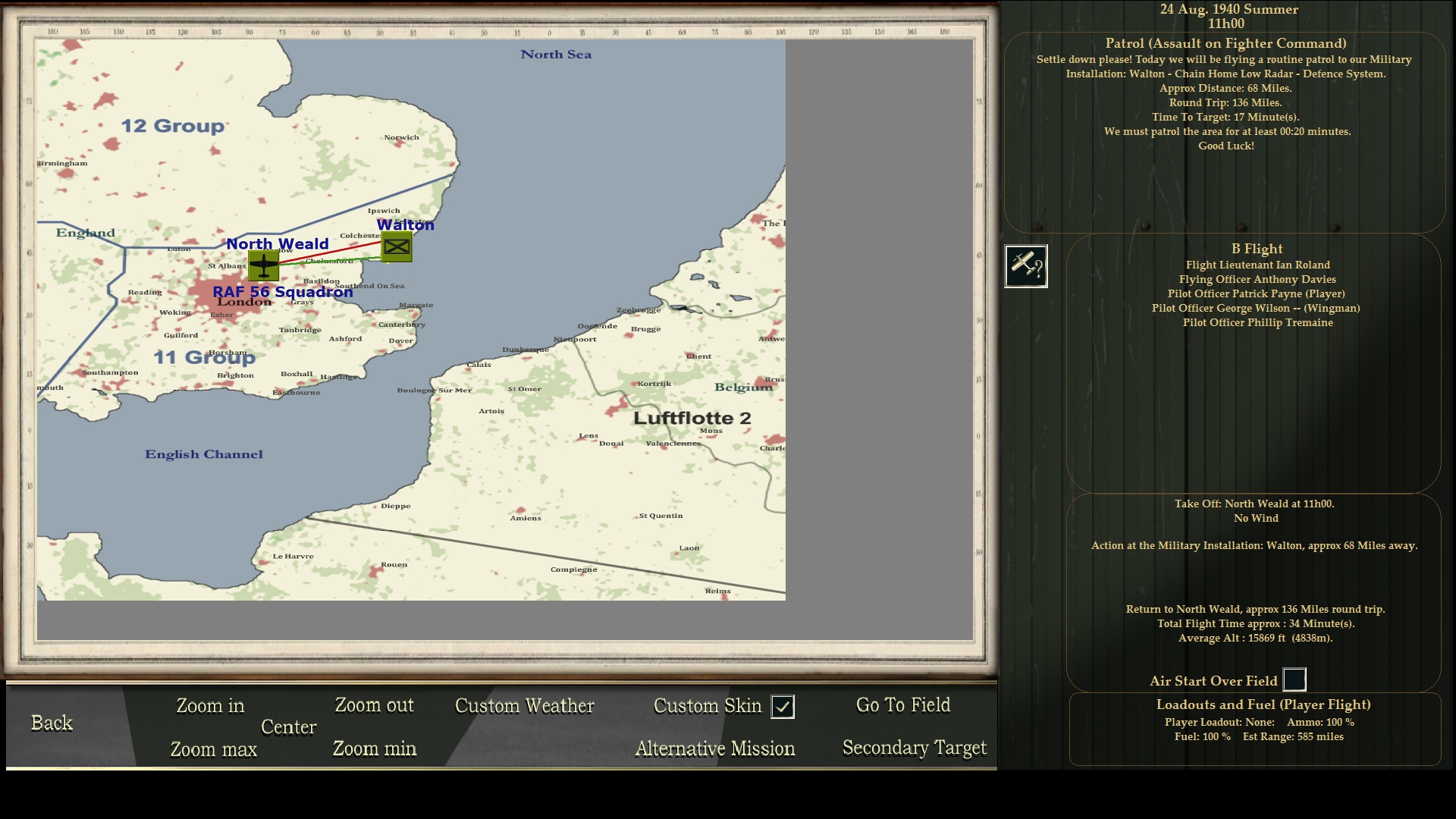 Not surprisingly most of the British missions consist of either patrols or interceptions. Kept fresh by varied destinations, weather, and opposition (occasionally you'll return home without seeing a foe) these outings communicate the flavour of the Battle of Britain decently and are generally less predictable than equivalents in sims like IL-2: BoS. Glimpses of neighbouring dogfights or recently pasted airfields are not common but fans of BoB memoirs will find themselves enacting dimly remembered passages from time to time. 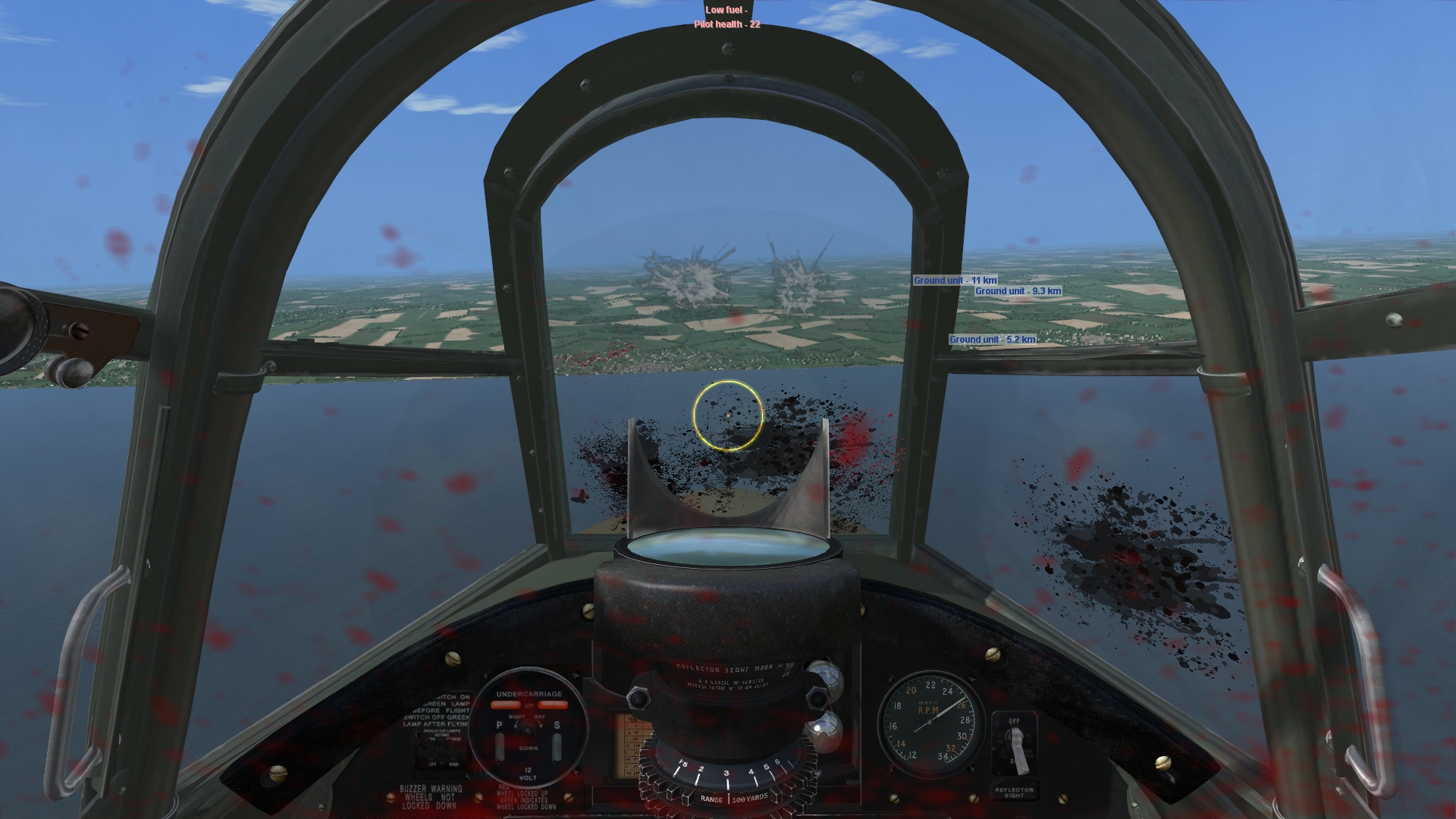 Yesterday evening, intoxicated by the thrill of the chase, I made the mistake of pursuing some fleeing Ju 88s across the Channel. By the time I realised where I was my ammo boxes were empty and there was an angry knot of Zerstörers on my tail. I eventually bounced into Hawkinge (not my home base but the sim is easy-going where landings are concerned) with unsightly blood and oil spatters on my windscreen and extra grey hairs on my head to remind me of my folly.

Detailed personnel records bind you to your squadron almost as effectively as the desperate radio chatter that accompanies furballs (Unfortunately, radios can't be used to call for vectors to bases or bandits). Sticking close to wingmen doesn't only improve your chances of survival, it increases your chance of being credited with kills. All air combat sims should emulate WOFF and WOTR by making player pilots submit claims. Waiting to find out whether victories can be independently verified and thus officially acknowledged adds interest to inter-mission intermissions aching for darts, chess, cribbage and patience mini-games. 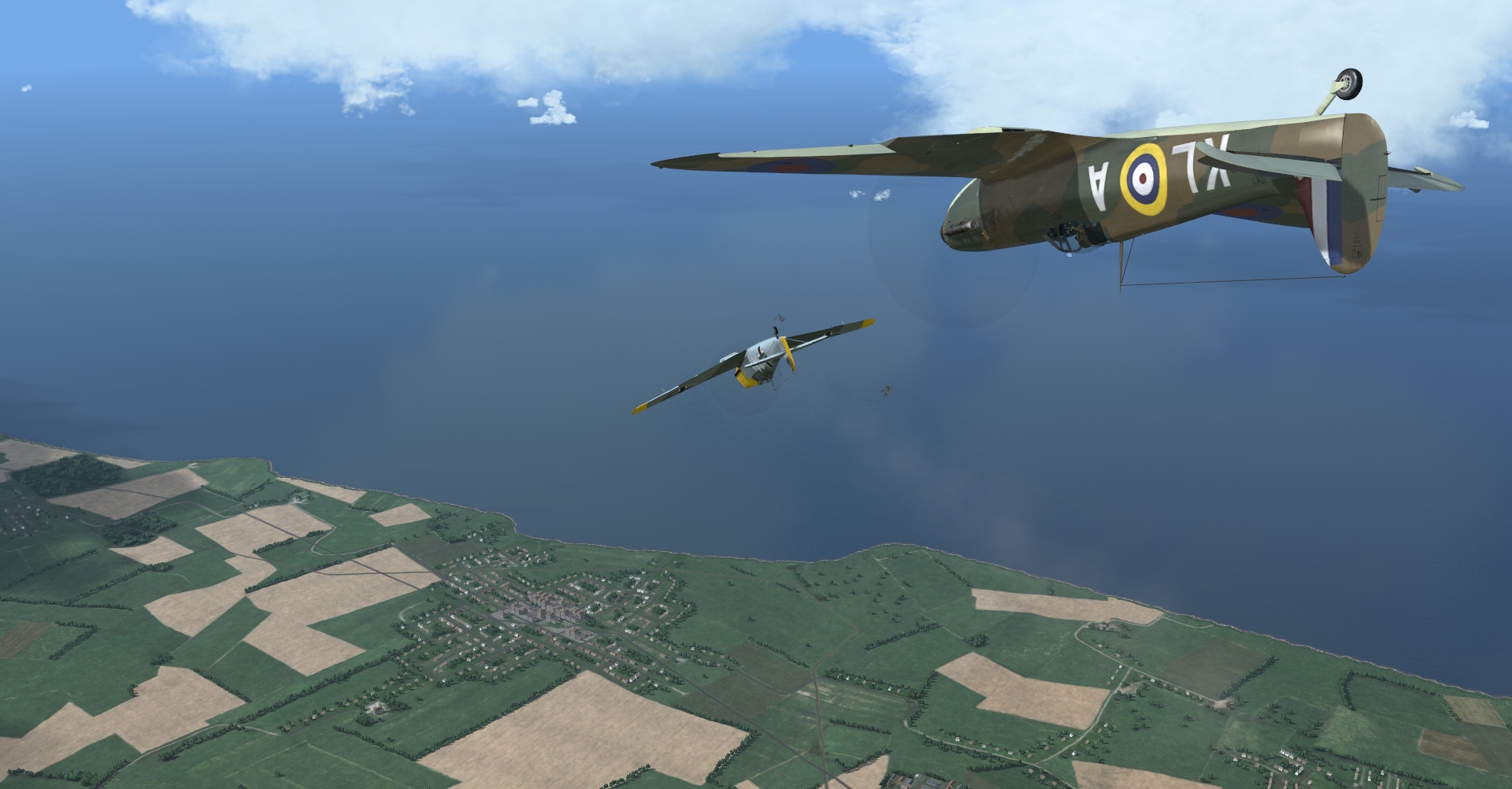 WOTR's first payware expansion pack probably won't include virtual pubs or messes but will feature the flyable Spitfire the game arguably should have launched with. Enriched with R. J. Mitchell's marvel, that admirable campaign engine should be even more appealing, and those wonderfully spirited bandits a tad easier to catch. 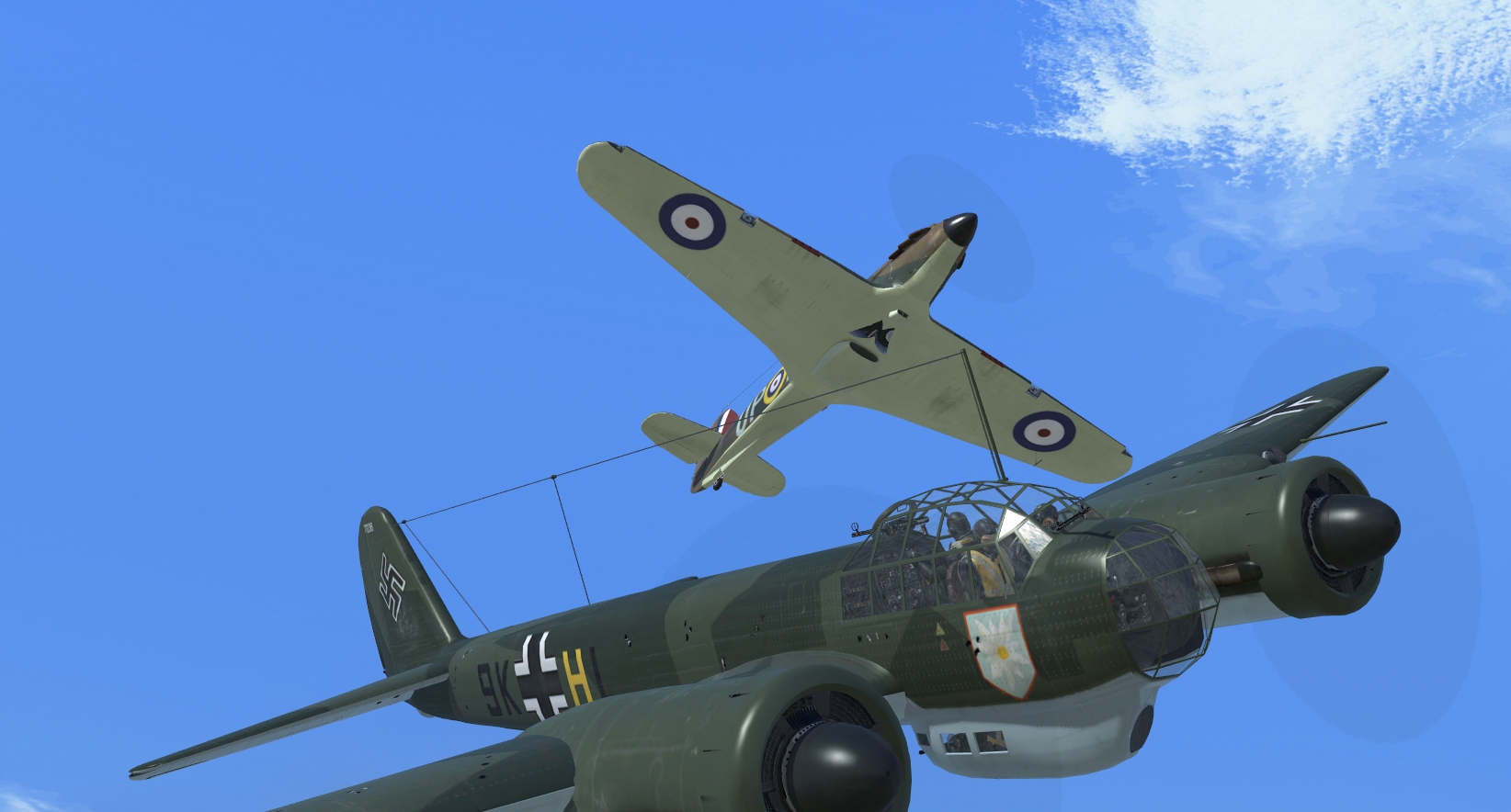 Assuming I can find it in my heart to forgive Old Brown Dog for clear-felling the New Forest, there's a good chance a coming Flare Path will contain a WOTR prequel to this AAR. If you've still got questions about the sim post them in the comments and I'll do my best to provide answers whilest relating the story of Neville Novichok's time as a BoB Brylcreem boy. 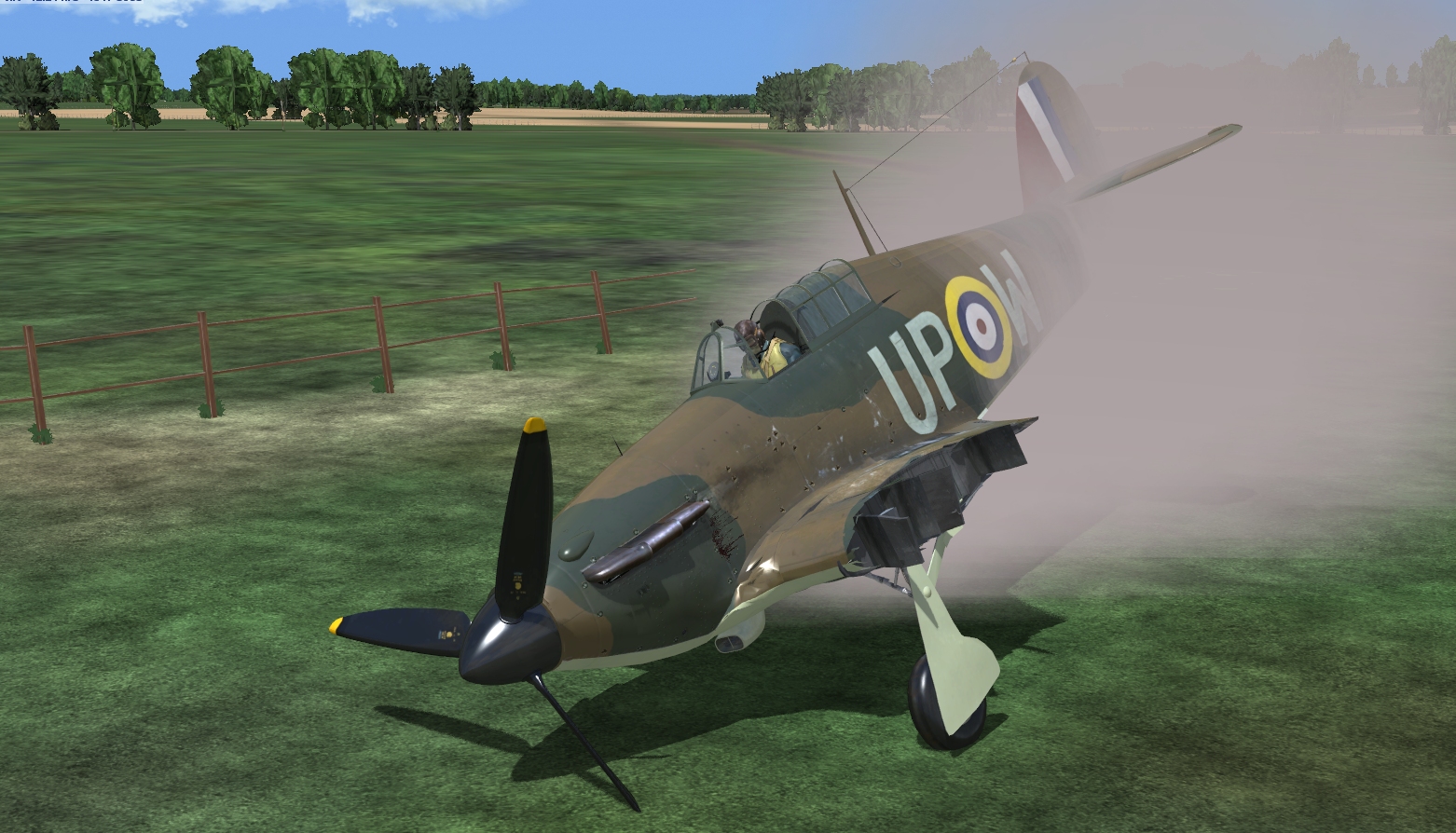