Although IL-2 Sturmovik's new Rise of Flight-style career mode looks decidedly unambitious when set beside the best the genre can offer a solo campaigner, it's a big improvement on what it replaces and, assuming you're playing with the 'iron man' box ticked and don't wander too far from assigned routes, a powerful drama amplifier. During his first five randomly-generated sorties over the Kuban bridgehead, my current in-game alter-ego, Nikolai Novichok, had several opportunities to inspect the Grim Reaper's shrapnel-sharp soul-scythe at close quarters. Will his luck and nerve hold for another five missions? 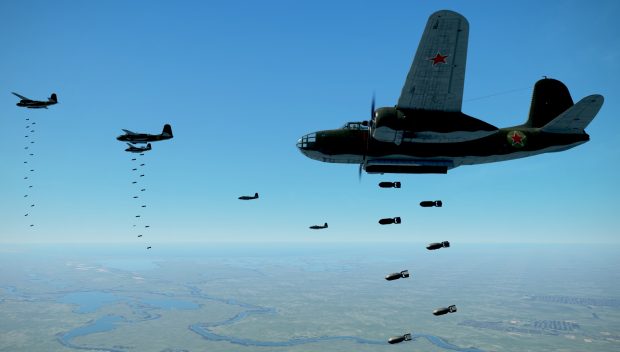 The fourteenth of June, 1943 is a day made for lake swimming and wild strawberry picking. Thanks to the ambitions of a certain A. Hitler, Nikolai and twenty-three of his comrades spend it dismembering German artillery pieces and German artillerymen near Krymskaya. 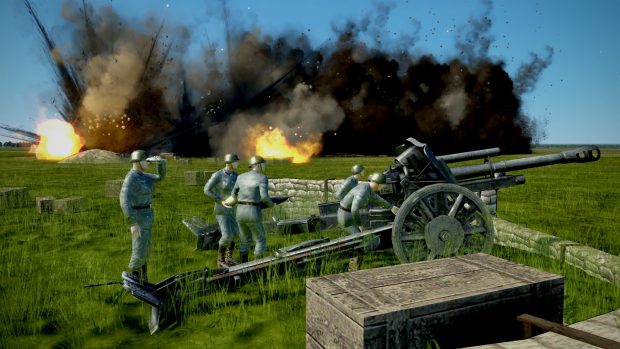 After a quiet ingress, a textbook high-altitude bomb run, and a few minutes of fruitless Stuka searching (radio messages suggest Ju 87s are in the vicinity) the draw of the deckchairs at Korenovskaya becomes irresistible and I turn for home.

Back at base the icon-dotted debrief map reveals that some VVS pilots had unforgettable afternoons.

The following day, fearing another drab milk-run, I ignore Flight Leader Sokolov's 'Stay in formation!' entreaties and journey to the Luftwaffe strip at Krasny Kurgan via a circuitous southerly route of my own devising. Disappointingly, the dog-leg reveals no mired Opel Blitz trucks, no daydreaming Ju 52s or dawdling troop columns, in fact no targets of opportunity whatsoever.

My detour means I'm still 25 kilometres from the officially sanctioned bomb bay evacuation point when the 'Primary Objective Complete' message appears (in French for some strange reason). Have I missed out on all the fun? Will there be anything left to eviscerate by the time I'm in a position to eviscerate?

Silly questions. For an out-of-commission enemy airfield, the drome at Krasny Kurgan feels remarkably in-commision when I finally arrive. All of the base's numerous flak batteries seem to have survived the raid, and be out for revenge. For a minute or two, purposeful yoke and rudder inputs baffle the gun crews, and I manage to kid myself that vandalizing a line of parked Heinkel 111s then fleeing to the NE is a practical proposition. Then the gun layers pull their socks up, the avant-garde flak-on-airframe marimba solo gathers pace and I realise I'm in serious trouble.

Crossed fingers and silent prayers fail to stop a whirling shard of steel from slicing through one of the cables that connects yoke to ailerons. Gravity claws at the stricken Havoc, hauling it earthward, while I battle to keep the horizon roughly horizontal. We pancake close to one of the shell spitters that engineered our descent.

Before the dust has settled, Nikolai and his two comrades are out, dashing for the sandbagged '88', pistols in hand. The startled LW gunners reach for their own sidearms too late to defeat the audacious assault. What they failed to accomplishing with their FAB-100s, the Red aviators set about achieving with the commandeered artillery piece. By the time my avatar and his assistants slip away in a purloined Sd. Kfz. 223 armoured car, most of the structures and vehicles at Krasny Kurgan are smoking ruins.

Oh, hang on a minute. Sorry. It appears the above paragraph is the result of concussion sustained during the crash landing. Nikolai and pals didn't actually storm any flak guns or drive back to friendly lines in a nippy Leichter Panzerspähwagen. They staggered from their broken bomber with hands raised and were promptly marched off to a PoW camp, along with the survivors of all the other A-20s sent to decimate Krasny Kurgan. 15/06/1943 was a black day for the 244th Bomber Aviation Regiment, and no mistake. 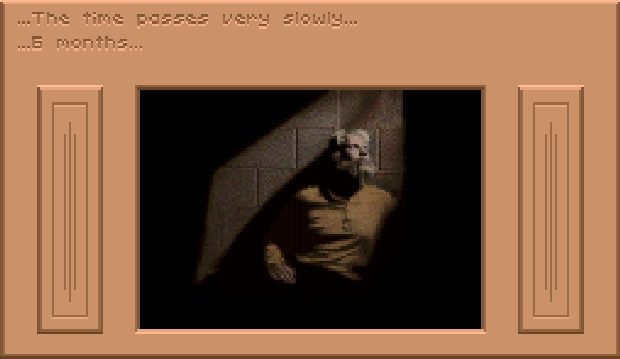 As IL-2 doesn't do beardy incarceration montages followed by brief accounts of miraculous escapes, it looks like I have no option but to turn my back on Nikolai Novichok at this point and take up the story of his cousin. 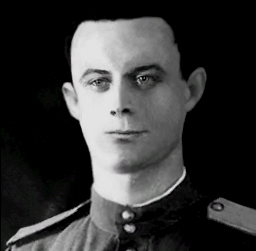 Allow me to introduce Neville Novichok. Rather fortuitously in the light of Sunday's RAF centenary, he's half-English and flew Supermarine Spitfires during the Battle of Kuban.

The donated Spits that helped the Soviets liberate the Taman Peninsula in 1943 were better machines than the ones that helped the RAF win the Battle of Britain in 1940. VBs rather than Mk Is, they packed harder-hitting weaponry (Hispano cannons in addition to rifle-calibre Brownings) carried more armour, and, thanks to improved Merlins, had better performance at altitude. 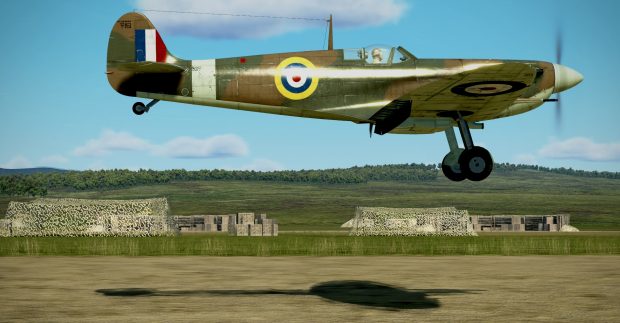 Once VVS pilots had learned how to exploit their key strengths (excellent manoeuvrability and rapid acceleration) and work around their key weaknesses (dispersed firepower and a relatively slow dive) they enjoyed considerable success with them. Whether Neville has the necessary talent to use his Brummie beauty the way aces like Johnnie Johnson and George Beurling used theirs remains to be seen.

08.30, 24/04/1943. Hearing an unfamiliar engine note overhead, suntanned toilers in the fields next to Krasnodar aerodrome, unbend their backs as four strange sylph-like fighters hasten upwards and westwards. The echelon of 57th Guards Fighter Aviation Regiment Spitfires is making for Abinskaya, a hamlet 70 kilometres away where Soviet troops are massing for a coming assault. Once there they will loiter for as long as their fuel reserves allow, in case the Luftwaffe attempts a spoiling raid. 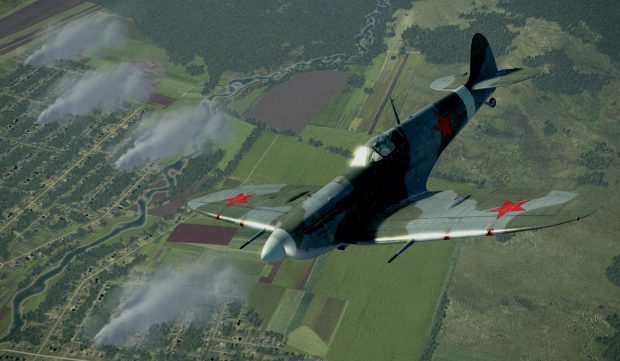 Slightly bored after twenty minutes of undisturbed circling, Neville Novichok is thinking about a crimson dragonfly that earlier that morning took a fancy to his shaving brush when a radio message from the Flight Leader turns his mind to less elegant creatures of the air. Andron Makarov has spotted four Bf 109s and four Ju 87s approaching from the direction of Anapa. 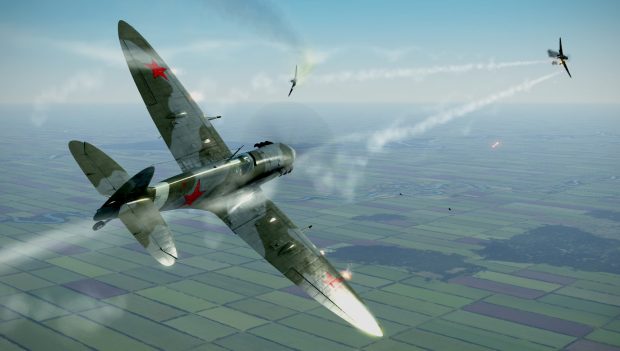 They have the numbers, but we have the height. I wait until a pair of Stukas is almost directly below me then pull my stick to starboard. A direction-reversing split-s puts me almost exactly where I want to be and moments after I dab my fire button for the first time one of the crook-winged refugee molesters begins to smoke. Breaking right in panic, the other dive bomber gets my second and third bursts. I'm about to give it a fourth, when it jettisons its bomb load and noses down seemingly done for. Two kills in twenty seconds. Not bad. And that pompous twit at RAF Prangford said I'd never make a fighter pilot! 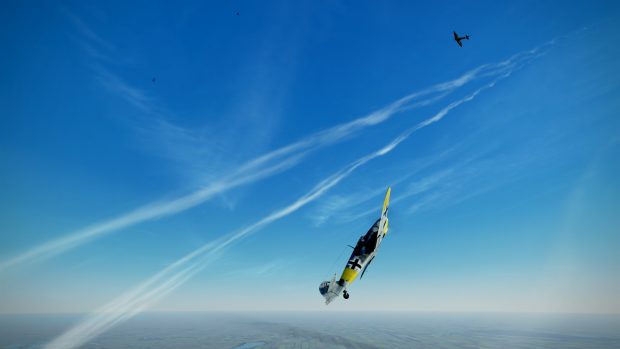 Once they realise there are wolves amongst their flock, the LW shepherds aren't slow to respond. I'm searching the sky for a third victim when my view is triptyched by vertical cannon shell trails. 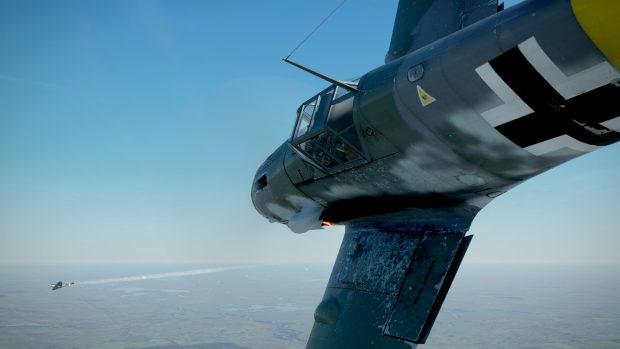 Bleeding energy and below me, the attacker struggles to track as I evade, but one of his mates closing from nine o'clock with a slight height advantage has better luck. Extremely impressive long-range deflection gunnery leaves my Spit hemorrhaging high-octane fuel.

Time to make myself scarce. I put my faith in Messrs Rolls and Royce and head for the deck, closely followed by the marksman that punctured my tank. The persistent so-and-so harasses me with his nose-mounted MG 131s for a couple of nerve-racking minutes before abruptly vanishing. On my return I discover, via the mission movie, the reason for his sudden departure. 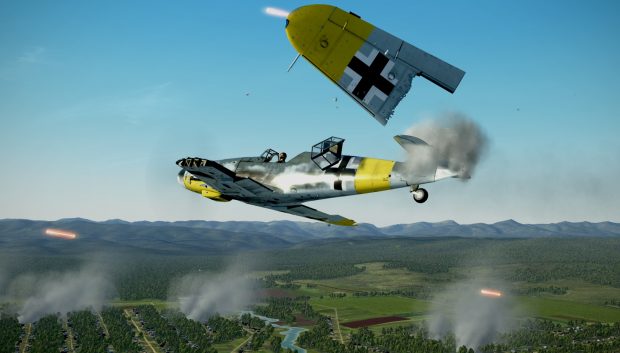 My solitary Stuka scalp (annoyingly I was only credited with one kill) is the only bright spot of a pretty disappointing day for the 57th GIAP. Two of the four Spits that departed Krasnodar in the morning, failed to return. Can we do better tomorrow? 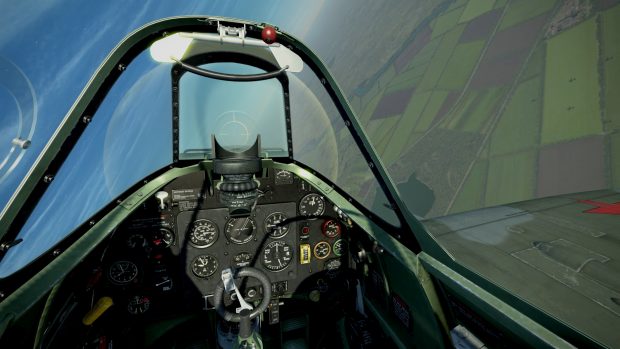 Да! All six machines tasked with escorting A-20s to Varenikovskaya early on the 25th, survive the sortie, and Neville touches down beaming from ear to ear after plucking two Bf 109s from the cirrus-streaked blue.

I suspect the pilots of said Messerschmitts hadn't encountered Spits before because they played right into my hands. Clearly no-one had told them that VBs can turn on a kopeck. 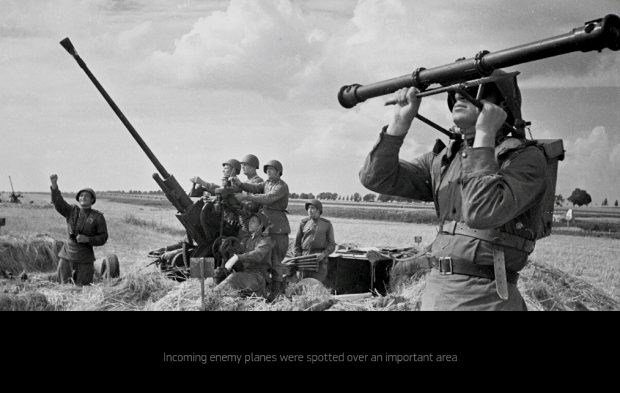 Shortly after lunch, we're back in the air, hurrying to intercept ground attack planes spotted near Krymskaya.

We arrive on the scene to find six Fw 190s savaging Soviet vehicles and guns while overhead an umbrella of four Bf 109s looks on approvingly. As there's just four of us, and the butcher birds are now unencumbered by bombs, I'm not exactly brimming with confidence when I plunge into the maelstrom. 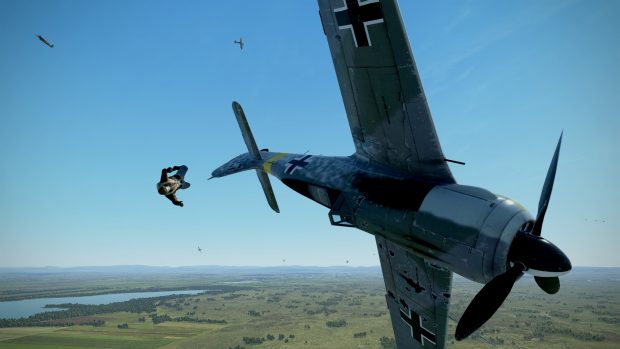 A smoke-wisp of self-belief becomes a tiny curl of incandescent flame when my very first cannon squirt leaves a Fw 190 with a frozen prop and, a few seconds later, a vacant cockpit.

Encouraged, I climb and roll, my eyes peeled for black crosses and yellow fuselage stripes. I'm not searching for long. A Fw 190 piloted by one Christoph von Breite's slides obligingly into view below. Thoughts rather than muscles manipulate my stick and rudder pedals. Down... down I go. 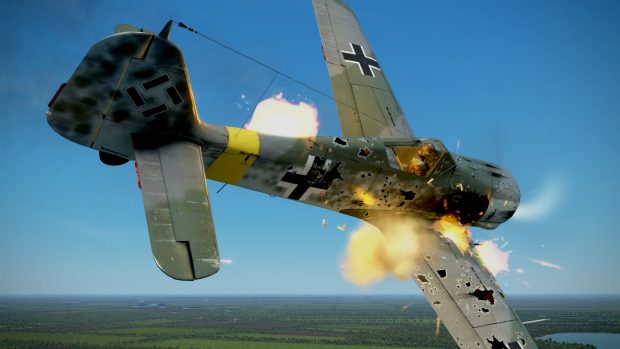 Arcs intersect. Fates intertwine. My Hispanos and Brownings bark and two thousand kilometres away in Leipzig, Christoph's wife collapses in the doorway of haberdasher's shop like a marionette with cut strings.

Ten versus four is now eight versus fo BLIMEY! 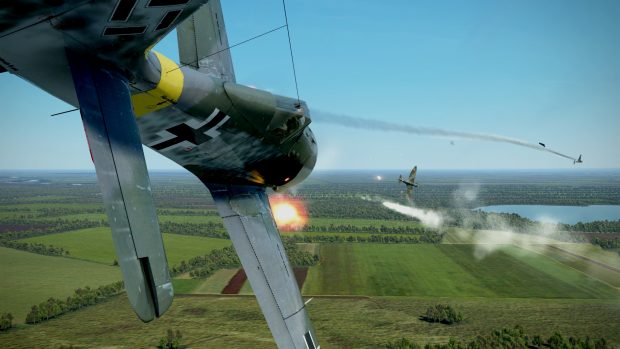 Somehow I failed to notice that Breite had a wingman watching his six. As I wrench my VB into a desperate spar-straining starboard turn, that wingman endeavours to do to me what I just did to his pal. 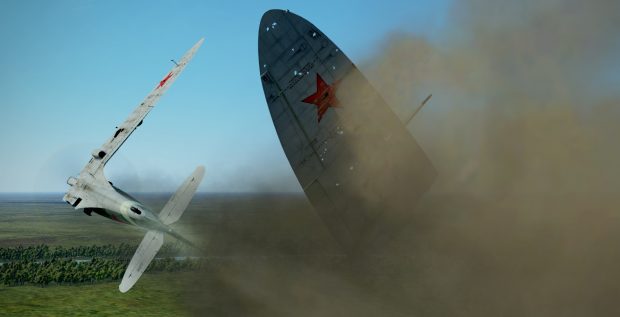 He endeavours and he succeeds. 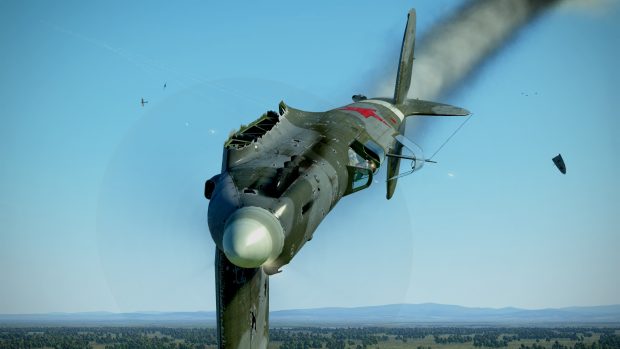 Shift + E? Alt + E? Ctrl + E! It's ages since I had to get out of an IL-2 aerodyne in a hurry. Eventually the canopy is sucked away by the slipstream and, frighteningly close to the ground, I part company with my maimed mount. 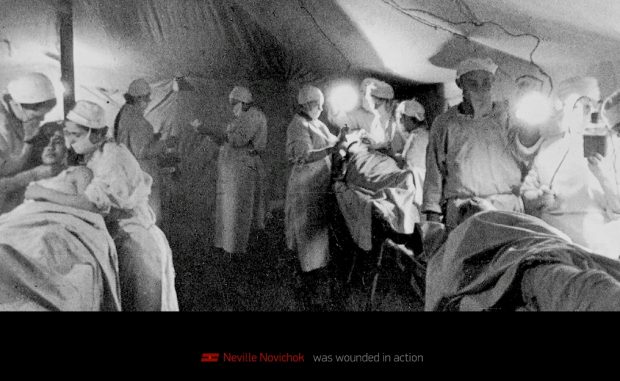 In the next instalment of The Novichok Diaries, the convalescing Neville reads the complete works of Dostoevsky, learns how to play contract bridge, and grows very attached to a wounded Po-2 pilot called Tatyana.