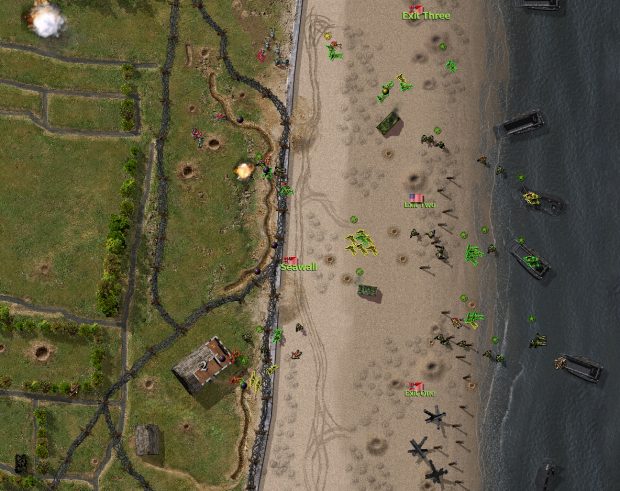 GOG.com persuaded another three Close Combat veterans to re-enlist this week. Close Combat: Modern Tactics and Close Combat: Cross of Iron are relatively recent Matrix productions that, at $40 each (currently on sale at $20) invite “mutton priced as lamb” accusations. Close Combat V, on the other hand, is one of the original quintet, happy to reflect the age of its engine in an enticing $6 price tag. 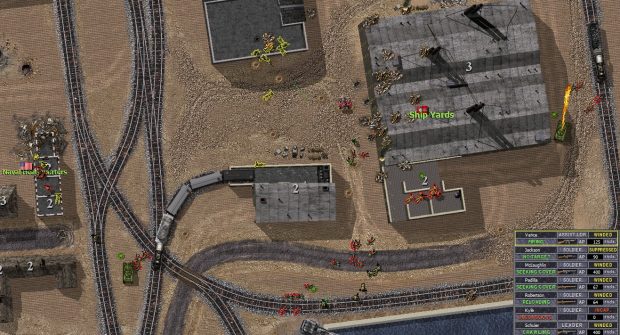 Although I was suffering from Close Combat fatigue and Combat Mission infatuation when I first encountered the fifth instalment of Atomic's top-down tussle series, I recall giving it a fairly enthusiastic reception in the pages of jaunty RPS tribute periodical PC Gamer UK. I don't have the relevant issue to hand, but suspect I grumbled about the unimproved AI and the failure to acknowledge British, Canadian, and Free French participation in Operation Overlord, then softened admitting I'd still rather spend an afternoon storming hedgerows and clearing maisons in the latest CC than spend an afternoon doing the same in one of the prettier 3D turnless WW2 tactics games that were then all the rage.

Used as the chassis for numerous fine mods, vanilla CC5 featured rather illegible tank sprites, hence its exclusion from the following competition. To win one of the three CC bundles* kindly donated by the good eggs at GOG and Matrix send me – timfstone at gmail dot com – an email listing the four tank types** pictured below in the next 48 hours. The trio of winners will be determined with the help of chicken bones and goat entrails*** on Sunday afternoon. 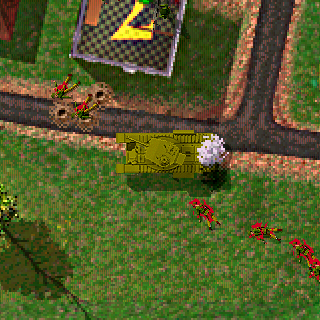 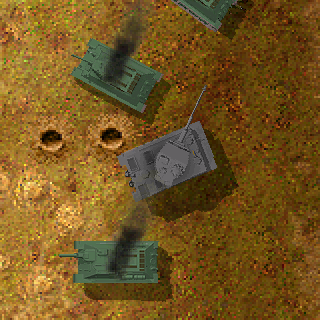 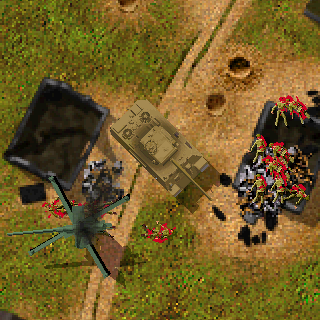 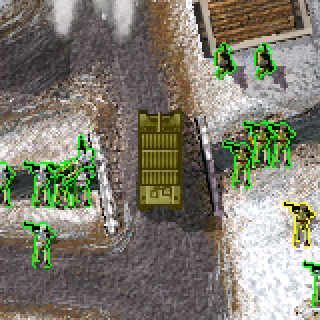 ** The AFV in the centre of the image is the one I'm interested in. Answers don't have to be too specific. If, say, a 'Matilda II' was depicted, I'd accept 'Matilda'.

No sly multiple entries or answers in the comments, please! 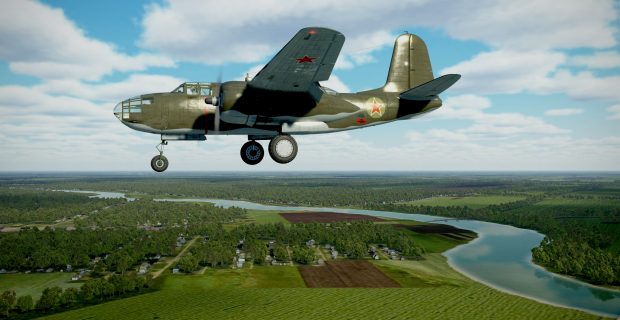 Last week's “IL-2 Sturmovik: Battle of Kuban is now complete!” announcement from 1CGS/777 included pretty pictures of A-20Bs and promising references to a new Rise of Flight-style career mode. Keen to sample the sim's long-game improvements and fly a facsimile of one of my favourite WW2 HE delivery devices, I threw my toothbrush, copy of Fraps, and lucky anvil into an old suitcase and boarded a train for Korenovskaya. What follows is an account of my first five days as a Havoc-equipped havoc wreaker. 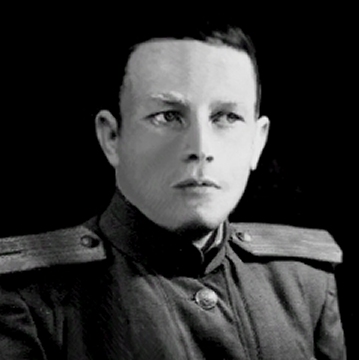 Meet Nikolai, my BoK avatar. Because I like the idea of him having spent his formative years sneakily shooting deer and snaring rabbits, I pick 'The Poacher' from the back-story list. 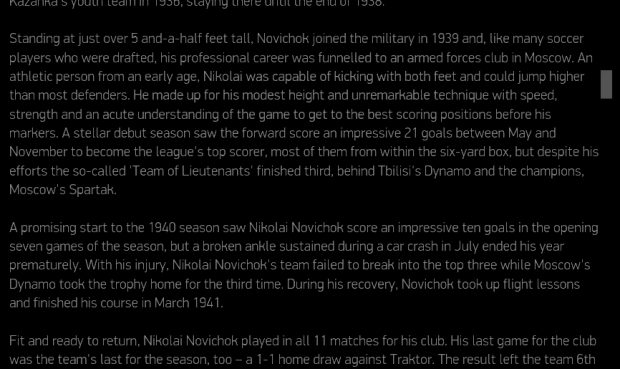 Hmm. Not exactly what I had in mind, but backgrounds that novel and plausible aren't too common in Simulatia. I'll take it!

Choosing a steed/squadron for my forward-turned-flier requires no thought. The Douglas A-20 bomber is irresistible. New to IL-2 Sturmovik: Battle of Kuban and a relatively rare sim flyable, the Havoc was one of WW2's hardest working yet least lauded warbirds. Fielded by most Allied airforces during the conflict, it served with quiet efficiency from the start of hostilities to the end, fighting on almost every front, in a variety of roles. I'd have prefered a 'G' version with a solid, cannon-crammed nose and a squat dorsal turret, but will happily make do with the appropriate-to-the-bridgehead-battle 'B' variant that 1CGS/777 provide. 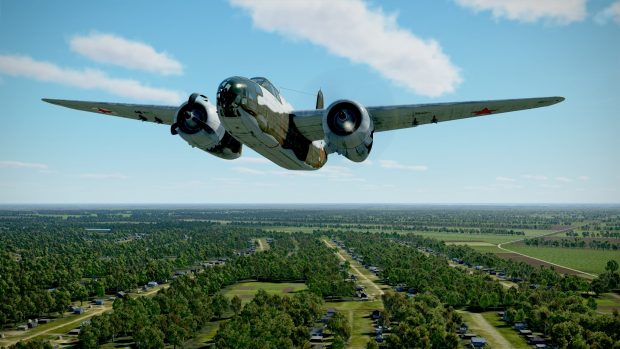 An hour spent getting to know the Havoc in the vicinity of my new home at Korenovskaya suggests that the devs have done their handling homework. Docile and robust, the A-20B leaves the ground and alights without drama, and will soldier on gamely on one engine if asked to. 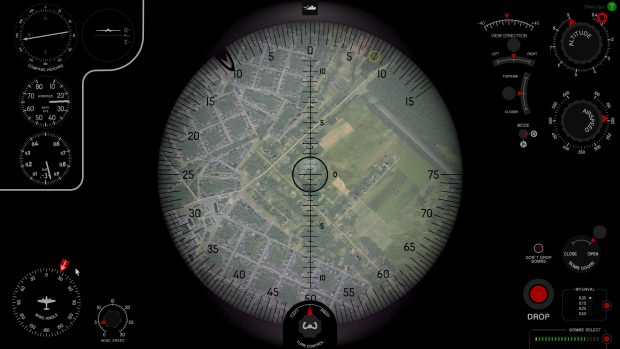 Manned by a crew of three (pilot, bombardier/navigator, dorsal/ventral gunner) it comes equipped with a simplified bombsight for high-altitude level bombing, and four Brownings, two of which are positioned with rear defence in mind. Compared to the last IL2BoS aircraft I attempted to bond with the Havoc is something of a teddy bear. 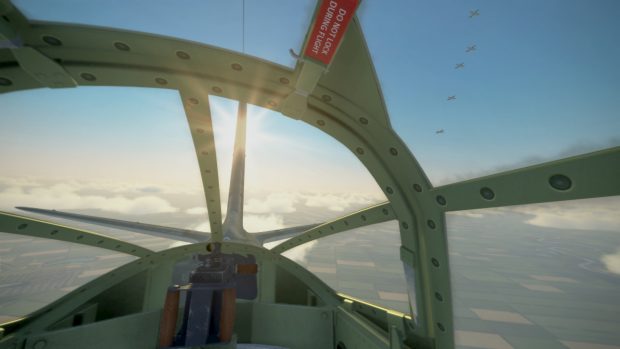 Nikolai's teddy bear is one of seven dispatched at first light on 09/06/43 to pulverize a Fascist supply dump at Natukhaevskaya. The outward leg feels like a navex. Unmolested by either flak or fighters we reach our goal without incident. Like bats leaving their cave at dusk, our FAB-100s exit their dark roosts en-masse, flutter for a few moments, shrink and disappear. Half a minute later, from the ventral gun hatch, I watch ragged lines of tawny explosions quartering the target. 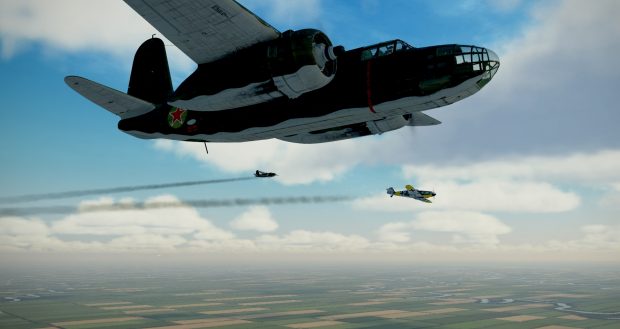 We're halfway home before the campaign engine deigns to answer the question on everyone's lips - “Where's the Luftwaffe?”. A schwarm of Bf 109s catch up with us near Ivanoskaya. Eager to greet the pursuers in person, I switch places with the gunner and proceed to inexpertly scatter tracer in the path of the nearest interceptor. He peels away, dragging a fluffy white boa behind him but not before he's raked a neighbouring crate. For the remainder of the flight Evgraf Vasilyev's A-20 trails black smoke and struggles to keep up with the formation.

The harassers harass us all the way to Korenovskaya, reckless tactics considering the number of Bofors guns dotted about the aerodrome. While we circle, waiting for landing clearance, our escorts and base sentinels set about cleansing the locality. They do their job exceptionally well. All seven of 244's bomb-buses land safely. I spend the evening sewing an Aviation Emblem and a Battle Merit medal ribbon onto my tunic. 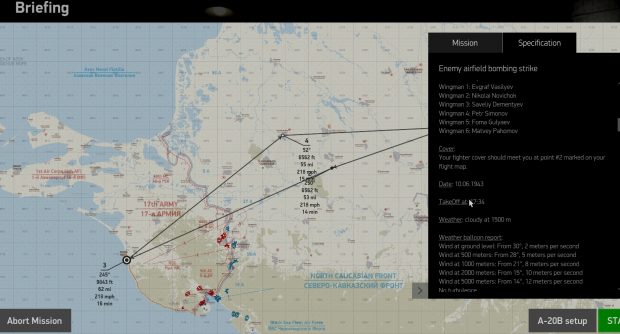 June 10, 1943. Off to the seaside today. The top brass have decided an enemy airfield close to Anapa needs landscaping. 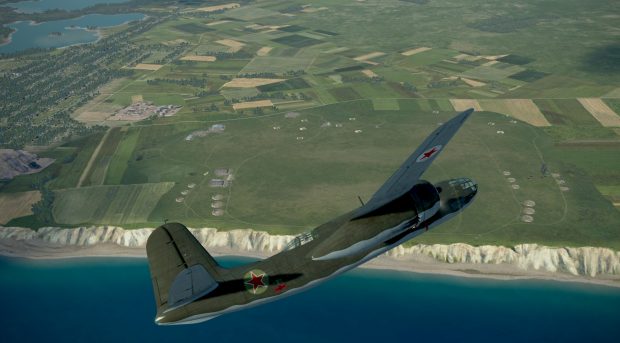 Ignoring the rebukes of the flight commander, I choose to drop my eggs at low altitude in a gentle dive. The experiment isn't a success (I somehow manage to miss a hangar the size of a football pitch) but it adds a dash of excitement to an otherwise pedestrian excursion. Once again the Luftwaffe is late to the party, and shows up without adequate aircraft to seriously trouble us. Finding myself utterly alone after my bomb run, I head home at treetop height expecting both strafing opportunities and trouble from roving bandits en-route. In fact I traverse 175 kilometres of Black Sea countryside without spotting any targets or agitating any hornets. The only Messerchmitts I encounter are busy tangling with P-39s (our escorts?) over the frontline and show no interest in stalking a vulnerable straggler. 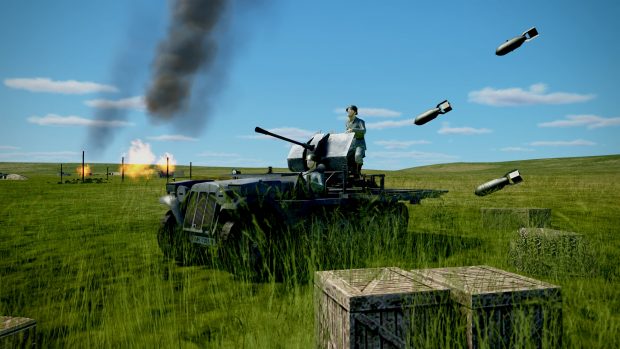 June 11. My sole victim today was a staggeringly inattentive flak halftrack. A bomb mode selection gaffe during a raid on an artillery position caused my entire payload to fall on one hapless Sonderkraftfahrzeug. Whoops. 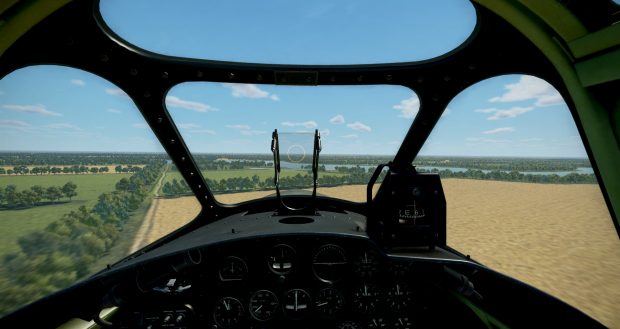 In a repeat of the previous day's folly, I then returned on my tod, daring any patrolling Bf 109s to try their luck. No bandits materialised and I arrived home to find that my extravagant lone-wolfing had been rewarded with a thoroughly undeserved Medal for Courage. 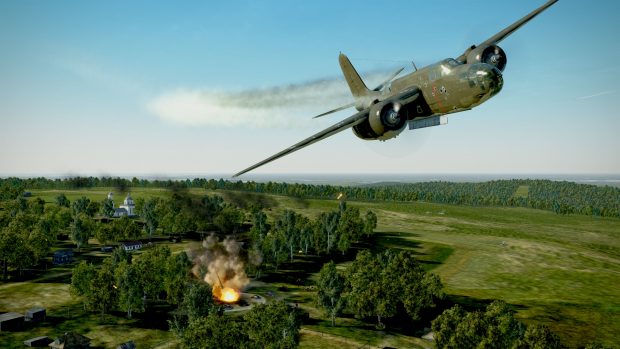 The following day the German flak flingers seem much sharper and more numerous. Tasked with pounding troop concentrations near the front, I brazenly disobey orders for the third time and opt to close rather than clobber from altitude. The intimate approach bags me three fat Panzer IIIs, an AA gun and an MG nest, but almost costs Nikolai and his comrades their lives. The A-20 that closes its bomb bay doors and darts for the cover of a nearby valley after completing three bomb runs, looks one steep turn or heavy landing away from the scrapheap.

Alarmed by venting fuel and streaming smoke, I choose to land at the nearest friendly airfield rather than traipse all the way home. Like all (?) incidental airbases on the campaign map, the outpost radiates sleepy desolation rather than frantic war-footing busyness.

June 13. No rest for the wicked. My fifth sortie is to be a Sunday outing to a faraway railhead. We're bound for Kerch which means a morning flit across the shallowest sea in the world. I wonder how easy it is to ditch a Havoc. 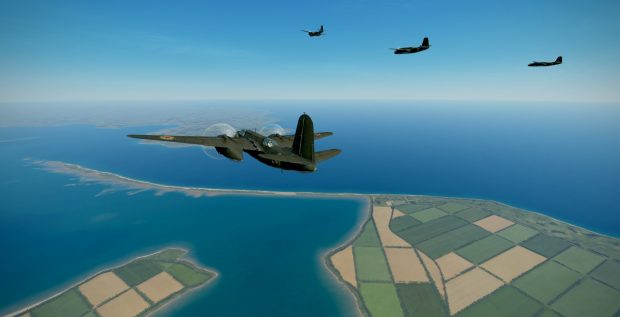 In a now-familiar pattern we run into a small party of Bf 109s about twenty minutes out from the target, and our Airacobras tally-ho while we cruise on unperturbed. Maybe the LW is busy elsewhere. Scanning the horizon for other bomber clusters - signs of other ongoing raids - nothing catches my eye.

Soon bomb-bay doors are gaping and the sky over Kerch is full of fin-stabilized Death. I circle observing the less-than-impressive results of the formation's bombing effort before lowering the glazed nose of my machine, thumbing the “start video recording” key,  and commencing my attack. 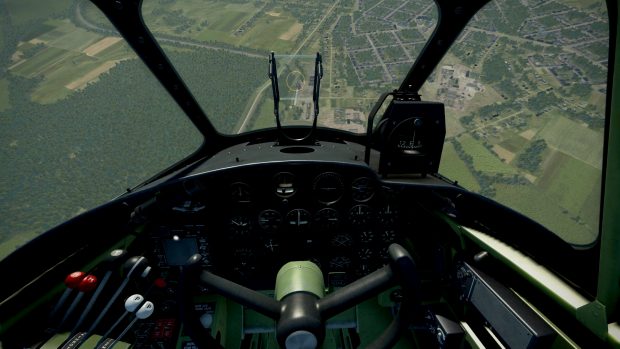 As the altimeter needle pinwheels I gently adjust the yoke, endeavouring to keep the railway station slap-bang in the centre of my gunsight. 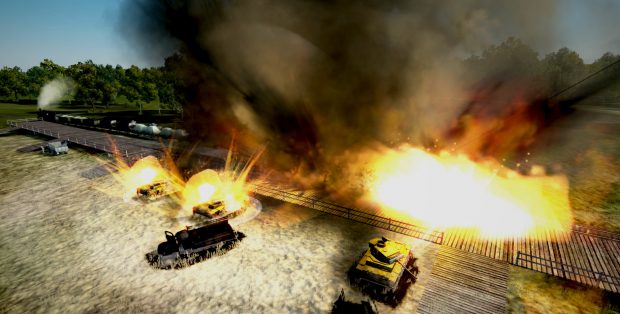 Blurred rooftops and buffeted trees dash behind the monitor surround. From behind me comes the muffled CRUMP-CRUMP-CRUMP of overlapping pandemonium. I resist the urge to pause, switch to free cam, and admire my handiwork (I'll do that later with the help of the flight video) and focus instead on dodging the chimney stacks that loom in my path like Deathchase tree trunks. For a second the Havoc forgets she's a seven-ton bomber and shimmies and skids like a fighter. The factory roofs flee, sun-tricked Black Sea waves taking their place.

Made it. Time to settle back and enjoy/endure another soporific thirty-minute cruise back to base. 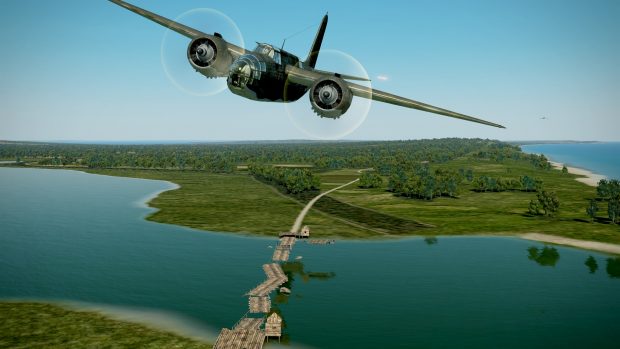 I've just crossed the impressively long and slender sandbank in the centre of the Kerch Strait when I notice a grey unidentified aircraft icon on my screen edge. When the grey text turns red and I realise I'm looking at an approaching Messerschmitt, I'm not overly concerned. Having slunk past Bf 109s on previous sorties without drawing fire, I'm fairly confident I'll be able to do it again. If I stay low and do nothing provocative, he'll probably just cruise strai...

Oh lord, is he altering course to intercept me? He is!

Suddenly I have a powerful hankering for the company of other Havocs. As an A-20 doesn't have the legs to outrun an Augsburg eagle I decide to drop to hedge/wave height and try some drunken meandering. With luck I can persuade the AI pilot - one Tobias Bohm - to stick a wingtip into sea or sand, or give my gunner a chance to plug him from the dorsal gun position.

A tense combat conga begins, every stutter from the rear MG giving me hope, every wisp of passing tracer from the Messerschmitt's twin underwing gun pods, provoking a violent weave to port or starboard. One day combat flight sim bombers will come with AI gunners that call out manoeuvre instructions. Until that day arrives, unfortunates like me will sweat and guess and hope. 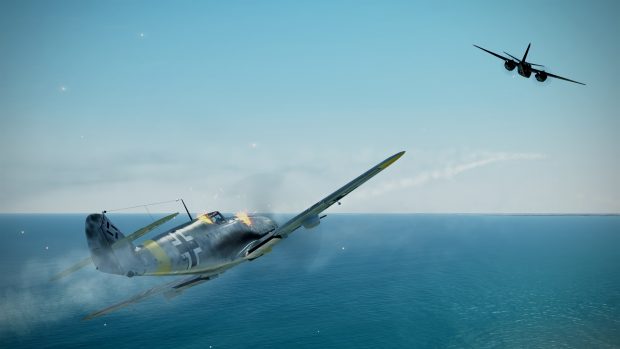 Eventually I can't stand the suspense any longer and decide to spring a surprise. I cut the throttles and haul back on the stick. As we rise, my gunner swiftly swaps positions and sends a stream of amber apoplexy snaking from the ventral gun hatch. The flurry of .30 calibre slugs strikes the startled German machine around the cockpit. Bohm decides he's done his bit and instantly abandons the chase. 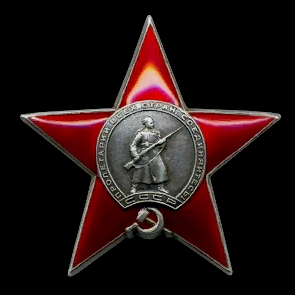 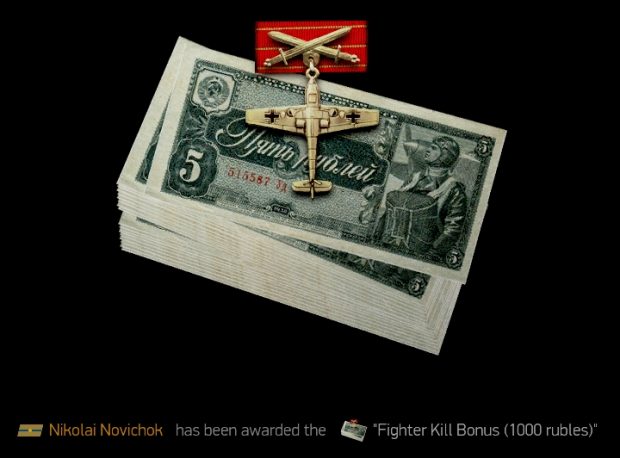 He's also wealthier and more highly decorated. For depriving Hitler's war machine of five tanks, three trucks, three railroad cars, a station, and a fighter during the Kerch op, and for completing a grand total of five sorties, Niki is awarded a rather fetching Order of the Red Star gong together with a pocket-defeating wad of five-ruble notes. Will he ever get the chance to spend those notes? Find out in next week's instalment of Havoc Havoc. 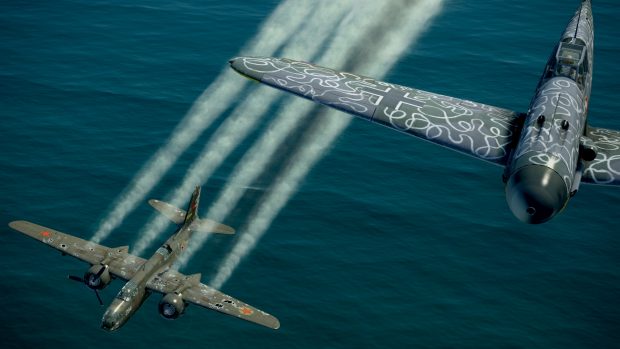