The Forgotten City, true to the spirit of its theme, is both a game that has yet to be released and is a game that has been available for years. While I've always been one of the few hold-outs that's been annoyingly "meh" about Skyrim, I fired up my copy this week to play through the The Forgotten City, which began as an extensive mod for Elder Scrolls V. In 2019, it is getting a stand-alone version that reinvents and expands its lore, but keeps the intriguing mechanics intact. Now that I've played it once, I'm ready to play it a dozen more times in its next reincarnation.

TFC feels like it hasn't been given its due. There was a quick trailer reveal at E3 2018 but beyond that it is also a game that folks have had a few years to play in its base state. And that base state is such a polished, fascinating, well made product; not just a prototype for a better idea. So I understand how it could slip through the cracks during Game Announcements Done Quick 2018.

The creator, Nick Pearce, wouldn't have started writing if he hadn't been punched in the face by a random dude on the street. For a bit of his personal history, and how this lead to him winning writing awards, I can't recommend this Kotaku interview enough. It also includes a more than 100 page design document that Pearce put together, before embarking on creating a game mod. I appreciate intense levels of dedication, but I can also see exactly why this detail-oriented work had to go in to making The Forgotten City work.

While we're doing a bit of outbound linking here, I'd be remiss to not include this blog post from RPS darling game creator Robert Yang about how the game presents player choice. Warning: a number of spoilers are included here. Feel free to skip if you're wanting to give this a pure spin.

For my first time through, I don't want to give too much away, but your Skyrim character drops through a hole into an ancient city where you first meet a dead man and then need to solve a series of mysteries building toward a central mystery of why this entire location is trapped in a forever mash-up of Tuck Everlasting and Groundhog Day... but with way more murder. The original mod is an engaging mix of counter-intuitive logic mastery and compelling writing, which I hope the new stand-alone title can update and expand upon. 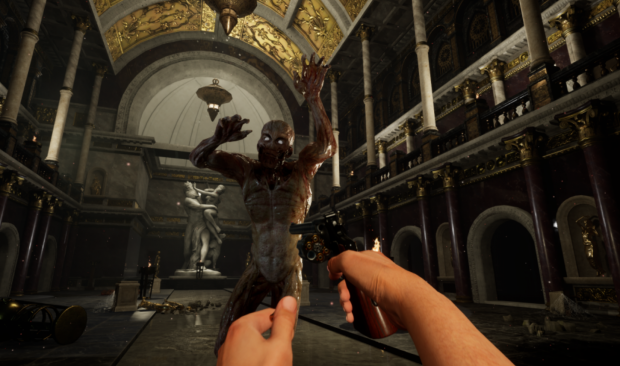 WHO GOT A GUN?

Check out the trailer from E3 below.

You can find the game on Steam and wishlist it now. It has a vague release date of 2019, but time is subjective these days.