There are two stages of packing for a move, as everyone knows. The first stage happens when you have loads of time before you have to leave, and is when you box things up in a way that makes sense. You slowly wrap up all but one of each piece of crockery in old wrapping paper and copies of The Metro, and put them in a box with KITCHEN written on the side. You put most of your books and DVDs in smaller boxes because they are very heavy. The majority of your clothes go into a suitcase.

The second stage is the panic stage, which is done anywhere from about a week from your moving date up to the second you hand your keys back. At this point you shove everything into wherever it will fit and have a lot of boxes that say 'GENERAL' or 'STUFF'. When you start unpacking these boxes, you get to enjoy being suddenly ambushed by a load of pants or a scented candle lurking in a box of plugs and batteries. Unpacking does a very accurate representation of this, whilst also being a very satisfying and sweet game of Tetris-with-stuff.

Packing is hell, but Unpacking sort makes me want to move house so I can unpack. I and many others have been quietly cooing over the idea of Unpacking for a while, and this weekend a demo of the first two unpackenings came out, coinciding with PAX X EGX this week. What you do is open moving boxes and take things out of them, and place them around the room. Once you've emptied a box it flatpacks itself out of existence. The game part is fitting in all the stuff you have in a way that makes sense.

The first room is a child's bedroom, from around 1997, the second a first apartment or - my instinct - a student digs in the noughties. There is a joy in seeing tape players get smaller, and the introduction of an iPhone and a big CRT computer screen. A real joy, too, in seeing what comes out of the box next. It's brilliant unpacking a bunch of clothes and finding a surprise toilet roll in the same box, and inferring that this is because there was a toilet roll on the desk or by the bed.

Each room is a very beautiful little diorama, and unpacking all the books and tiny cups and plates made me think of putting things away in a doll's house. The detail is amazing, to the point that you might even be able to recognise what some of the DVDs are. It also does a brilliant job at reflecting the annoyance of having too much stuff and not enough space to comfortably fit it into your tiny bastard kitchen. Where can I put the spatula? I want to put both the kettle and the biscuit jar on the side, pls, oh no, the toaster. 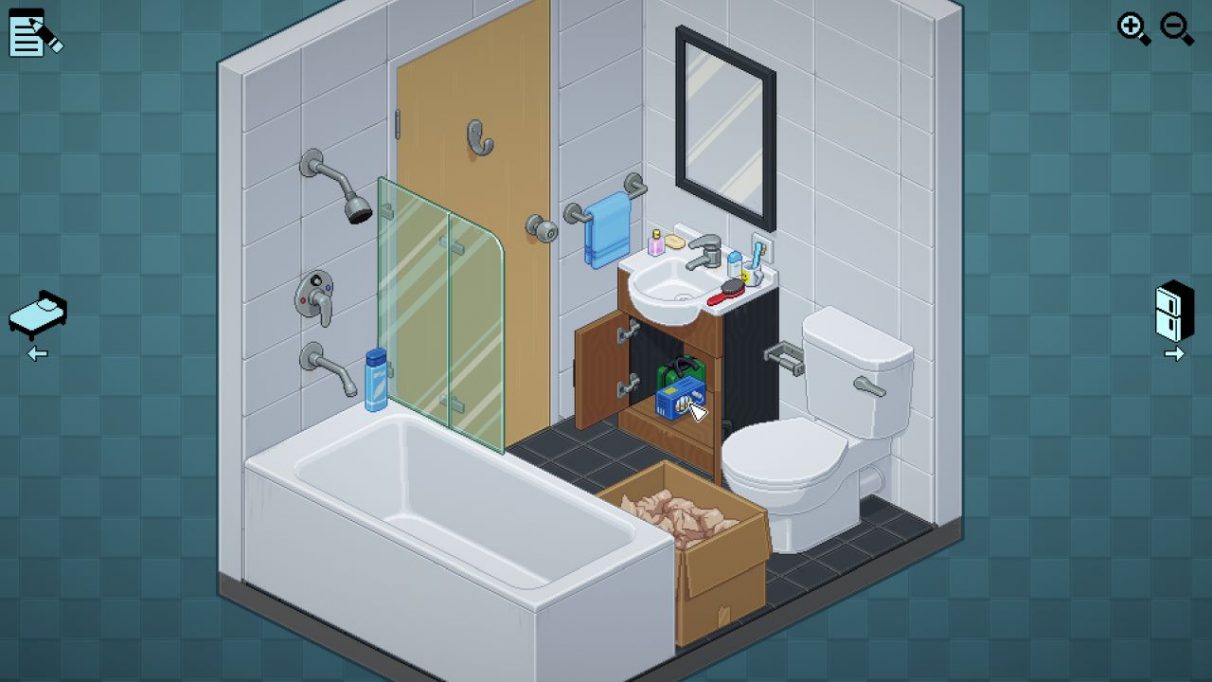 There is a very basic fail/win state to get over, in that if, once you've unpacked everything, some things are sort of in the wrong place, they will be outlined in red and you can't move on till you've found a better home for them. This isn't at all stressful, though, and really only requires that you think about how it makes sense to organise a room anyway. So, pyjamas can go in the wardrobe, but they can also go on the pillow because that's where a lot of people put their jammies ready for bedtime.

The very bestest thing about the demo is realising more about the person you are unpacking. I don't want to spoil it for you, because it's such a gentle but ongoing journey of discovery, so you should just go and get the free demo from Steam instead. Unpacking is out in 2021 and I am desperate for it.