Hong Kong has a popular snack chain called Aji Ichiban. Despite the name, it’s not actually Japanese, but I do recall going to these stores a lot whenever my family and I visited, where we’d fill our suitcases with its giant pack range of Chinese pork jerky and dried mangos.

Yakuza: Like a Dragon’s Ichiban Confections is also a snack shop, albeit one that specialises in Japanese rice crackers. It’s also unfortunately on its last legs - unless someone with the right business acumen can turn it around.

Sure, it’s his namesake, but most sensible people wouldn’t entrust their business to Ichiban Kasuga, a man who’s dumb as bricks, can’t even scrape together money for the yakuza, and living on the streets. Yet he’s got an infectious can-do quality to him, and an uncanny ability to turn everything he touches to gold.

So begins arguably one of the Yakuza series’ deepest mini-game timesinks, and the best way to rake in yen. Like everything else in the game, it gets increasingly ludicrous. The senbei shop is just a stepping stone to amassing a whole business empire, as your investments go from dodgy run-down establishments to getting staff to manage corporate buildings and glitzy night clubs.

Who better to run a high-end cabaret club than a ten-year-old kid with an escaped circus monkey?

Your staff are a proper wild bunch, especially once you start recruiting the oddballs you meet during side quests, who of course turn out to be model employees. Who better to run a high-end cabaret club than a ten-year-old kid with an escaped circus monkey and a giant vacuum cleaner? If you’ve got the funds, you can train them into a managing director in no time!

But your employees are also there to back you up during tense shareholder meetings that play out like mini RPG battles as you try to withstand a row of angry shareholders. The better you treat your employees, the more effective they are at pushing back against accusations of underperforming sales or bad investments. It’s a battle of persuasion rather than fisticuffs, but no less satisfying when you manage to placate the angry rabble into sitting the fuck back down. 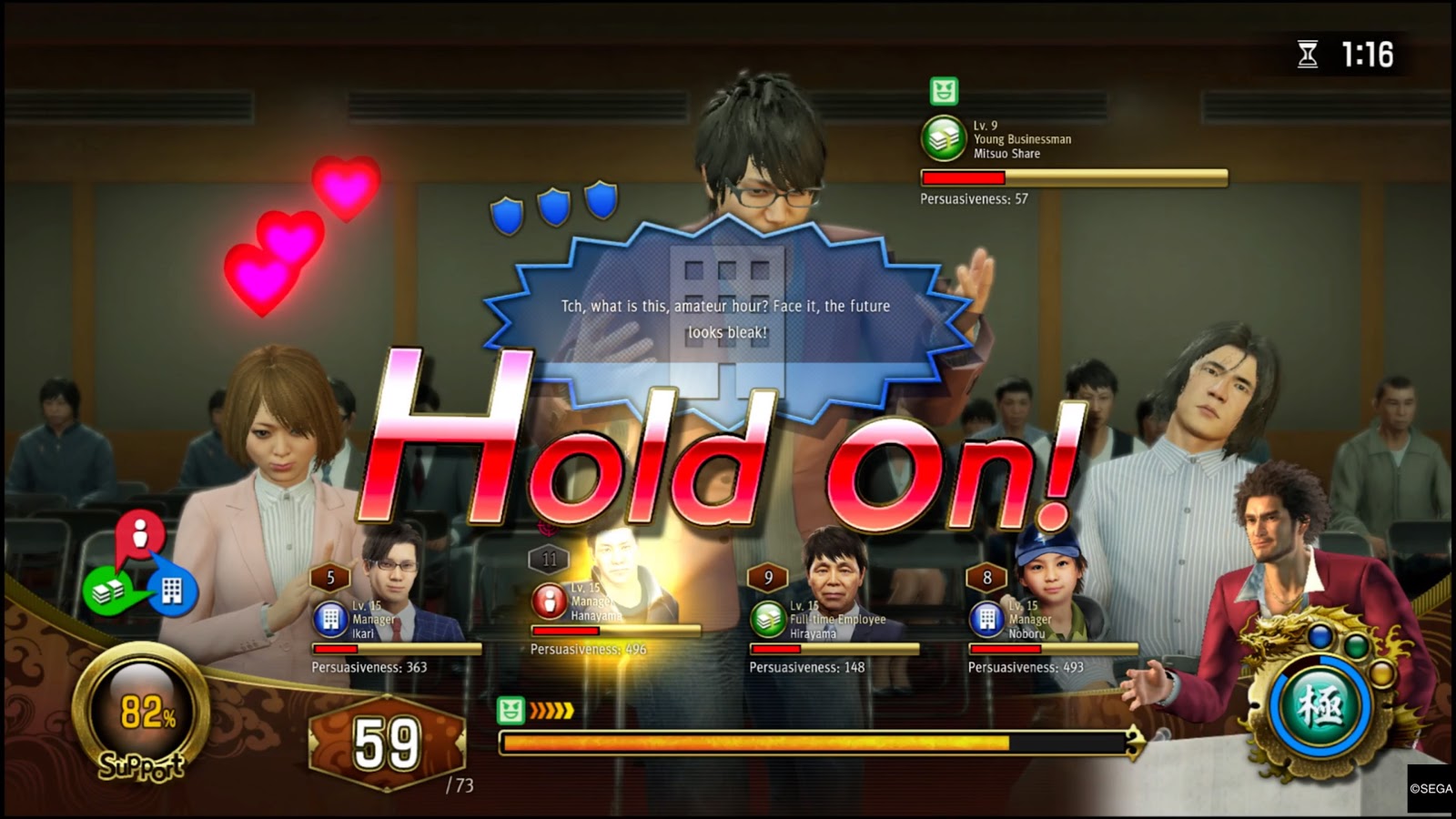 Occasionally, I catch myself wondering if this climb to the top of Yokohama’s business world is too conveniently sugar-coated. Am I not succumbing to the same old capitalist trappings, watching numbers rocket each quarter while businesses become disposable assets, sold as soon as the next profitable venture is in sight in the endless pursuit of exponential growth? And surely the answer to assuaging overworked and unsatisfied employees isn’t just throwing more money at them?

Yet, given how Ichiban’s heart is so raw and earnest, when you splash out on cheesy ads to boost your sales, which later become a pastiche of all that slick benevolent corporate branding that transcends product, you really do believe it’s delivered without a shred of cynicism. Plus you have to marvel that his ultimate move to turn around a room of shareholders is to launch himself down on his knees with a grovelling apology.

You’d love to see Bezos do the same.