When my brother and I were young, we would often harass my parents to spare a few quid for the arcades. Coins in sticky hands, we would immediately run-up to the first Time Crisis machine we saw and proceed to blow away terrorists to our hearts' content. It was amazing just how much power those little blue and pink plastic guns made us feel.

I have always had a deep affinity for games with excellent guns. From modern military shooters to fantastical sci-fi space operas, if there is a gun to be shooting, I am all in. And clearly, I am not alone. But of course, in the real world, guns aren’t as simple as holding right-click and spamming left. Real guns come with responsibility, unreliability and enormous consequences (which of course may all be reasons why we enjoy the fake ones). Enter: Disco Elysium.

Disco Elysium isn't the type of game I normally gravitate towards. The detective RPG meets nightmare existential crisis simulator is measured, thoughtful and provocative. These themes are at odds with my penchant for blowing things up with big rockets. But it is always worth expanding your horizons.

The moment Disco Elysium moved from stirring drama to one of the best games I have ever played was the moment I was finally able to handle a gun for the first time. In most games, a gun gives you immense power, but Disco Elysium stripped this power away and left me with the unfamiliar sensation of fear. 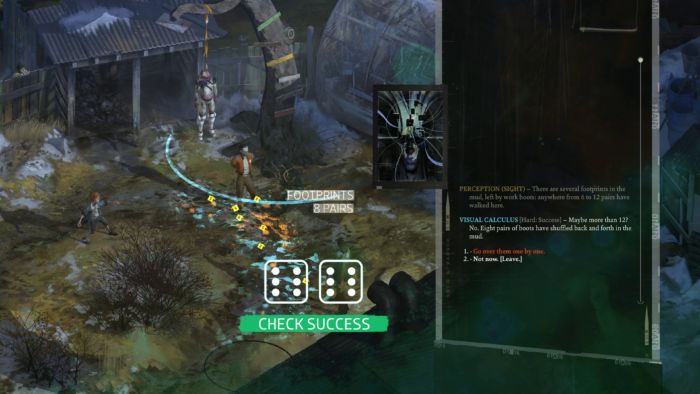 Early on in the game you and all-around great guy Lt. Kim Kitsuragi meet the murder victim whose death you're there to investigate, who has been hanging from a tree for several days. There are a few ways you can try and get him down, and one of them is to borrow Kim’s gun and shoot the restraint holding the body up there. It's a very difficult shot to make.

In Disco Elysium, there's no pointing to aim, no simple left-clicking, and certainly no 360° no-scope headshots from the top of a building (insert air horn noises here). Everything in Disco Elysium depends on your skills and a roll of the dice, so you're left with simple chance: a chance of either hitting your target, or of missing and hurting yourself or someone around you.

Of course, this is a detailed RPG, so a player could build their protagonist to be as physically gifted as possible, and wear clothes that help steady their aim, tipping the odds in their favour. Or you make him a neurotic socialist more interested in art history and speed, like I did. But whatever you choose, your chances of success remain just that: chances. The direct control is taken from you, so once you commit to firing that gun, you aren’t met with the instant flash of light and explosion of sound. The game rolls its D&D-inspired dice mechanic to decided whether you've succeeded or failed. Those precious few seconds of digital tumbling give you plenty of time to panic about what you have done. The die is literally cast. It's out of your hands. What will happen if I get this wrong? Who will get hurt? If I get it right will it even work?

I'm not saying all games should treat guns with the respect and fear Disco Elysium does. There will forever be a place in my heart for absolutely mincing a demon with a fat shotty. But Disco Elysium is a good example of how firing a gun isn't as simple as hitting left click, and it doesn't have to be in games either. Firing a gun in Disco Elyisum is still interesting and compelling, but it's thoughtful too.