Griefing, a term applying to any bad faith behaviour in an online game, whether it’s ruining things for your group or harassing other players, has reared its ugly head since early MMOs like Ultima Online. The behaviour existed even further back in MUDs, text-based multi-user dungeons, before the term griefing had been coined. Yet, going by the popularity of Untitled Goose Game, there’s clearly a perverse pleasure in bringing chaos upon a community.

Which brings me to Wattam, a game of action, exploration and puzzles, and like Untitled Goose Game, it's an offline game that could be viewed as a microcosm of online spaces. Think of each of Wattam's sandbox islands as a server and the hundred-odd objects around the world as its users. While the core of Wattam is about building connections with each other, it’s also about explosions and poops, sometimes at the same time.

These are both classic topics in the griefer's handbook. However, this being a game from Keita Takahashi, probably best know for the playful Katamari games, explosions and poop are re-contextualised into something joyously weird and fun. You’re probably no stranger to the concept of team killing in shooters, a friendly-fire grenade usually being enough to ruin things for everybody. In Wattam, the magic bomb produced from under a green cuboid Mayor’s hat sends everyone in its vicinity on a giddy rush in the air, laughing louder than if they'd inhaled a heavy dose of gas and air at the dentist. Instead of a destructive power to be feared, explosions in Wattam are playful, and have scores of characters clamouring for you to “Kaboom with me!”

Similarly, getting turned into a sentient blob of poop hardly sounds like an attractive prospect. Darius is a big mouth and its only ability is to ingest things smaller than itself and then expel them as colourful coils of poop. Given this, you might argue Darius is the playground bully, literally swallowing and shitting out the little guys. But in Wattam it's adorable being a poop! Characters giggle even as they're chased and eaten, and afterwards their swirly fecal form is modelled after the emoji variant. This even gives poop's their own game objective of pretending to be the ice cream topping on a cone. 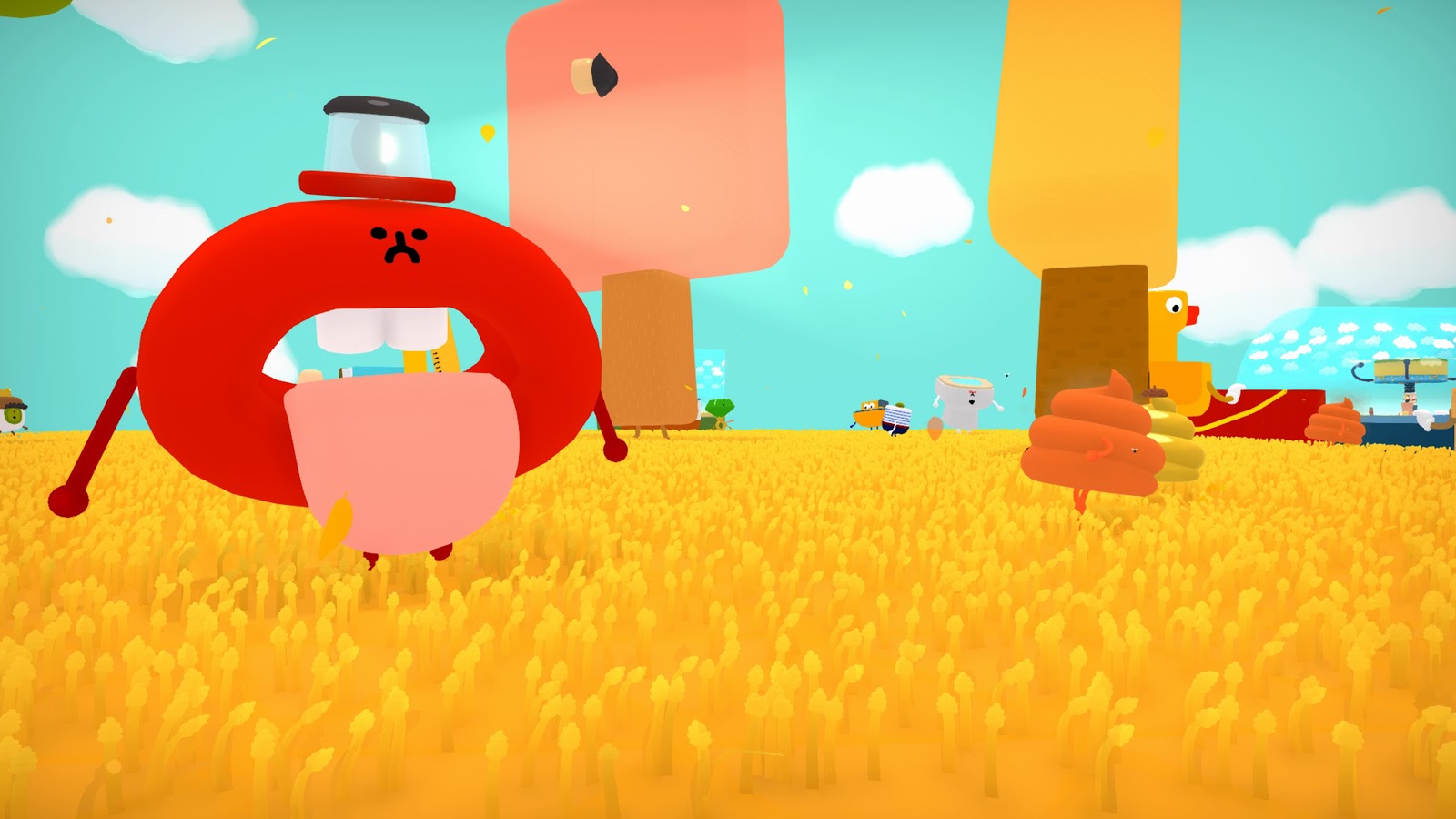 Being a poop has another perk because (when combined with the power of two other items in a mysterious process that I won't spoil) it’s the only object in the game that has the privilege of turning into gold. That’s right, Wattam gives a whole new meaning to polishing a turd (fun fact though: there’s actually a Japanese art form called ‘dorodango’ where you use just mud and water to make shiny spheres, which I discovered the TV show Mythbusters literally applied to poop).

The idea of safe social spaces isn’t new for developer Funomena’s Robin Hunicke, who also produced Journey, a game where positive cooperative experiences between online strangers is baked into the design. Wattam might not be a real online game but it still offers an interesting perspective on how you can detoxify familiar toxic behaviour. Otherwise, you can always consider it an outlet for harmless griefing before you log back in for another Overwatch session.