Weirdly, none of my favourite Assassin’s Creed Origins moments so far relate to assassinating. Then again, they never really did in the previous games. Instead they’re about buildings, specifically climbing them and going into them. So it’s appropriate that my absolute second favourite thing to do in Assassin’s Creed: Origins is tombs.

OK, so there are several extremely obvious and, frankly, attention-seeking tombs in Oranges’ Egypt, and because they’re so showy I held off investigating them for a good while. But there are more. The first I stumbled on was one near the opening area of the game, a training tomb, if you will, which featured a room stuffed with mummified cats. And yes, it was plenty to seal my excitement for the whole idea of tomb raiding in Assassin’s Creed. 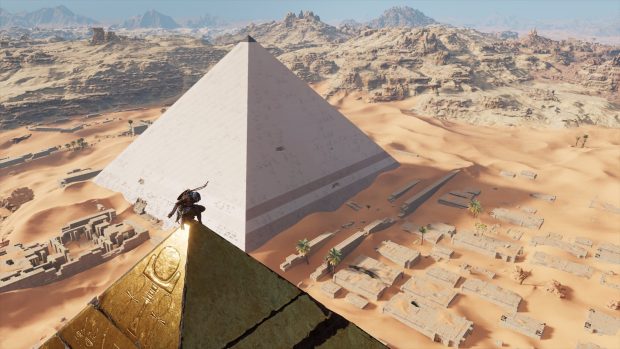 There are lots of reasons for appreciating a good tomb in Oranges. The big official ones are its equivalent of the big tombs in the earlier AC games and they award ability points. But there are other forgotten places to explore, and they all satisfy some of my innate fascination for blundering into deep passages that wind towards hidden chambers filled with riches. You’ll squeeze Bayek through narrow fissures, watch beetles swarming into the cracks of a wall weak enough for you to smash through, and slide under gaps.

And then, as you explore a pitch black hall, its broken pillars lit only with your guttering torch, a vast granite statue of a god will loom from the dark, its polished surface burnished in dancing gold by your flame. These moments are stunning. Oranges’ lighting is wondrously atmospheric, and a reminder that games don’t tend to do unlit spaces very well. They can be too dark to be practical, in which case you turn up the brightness in the settings. Or their shadows are just washed out, hardly contrasting with bright areas. In Oranges, though, you need to light the darkness if you want to see.

As such, one of the things I like to do in a tomb is to light them up. Bayek automatically holds his torch to any sconce or brazier next to him to light them. I like the sense that I might be lost down here, with all those thousands of tonnes of limestone above, if it wasn’t for the breadcrumb trail of lights I’ve left that lead out. And it also reminds me of the other thing games often do about light, which is to ask you to believe that the abandoned dungeon you’re wandering is just constantly lit by flaming torches, just waiting for someone to turn up and appreciate them.

Oh, there are problems with Oranges’ tombs. The official big ones are a bit gimmicky, with tooltips explaining what to do. And there’s not really enough varied, subtle and naturalistic challenge in all the places you find, with the same old sarcophagi popping up, over and over. I’d like to face some of their builders’ traps, get lost; I want to map them and wonder how to get to some void my eagle’s sensed deep within the solid stone. And maybe I want to bring back something more valuable and interesting than just a few coins from pots, a blue-rarity spear from a chest, and an ability point.

But as Bayek heads out of another burial chamber, leaving all their piles of actual riches behind, maybe he’s just leaving its wonders for another to claim. I’m happy to wait for another game to try to capture the magic of tomb raiding.