Day 21! This the last actual day of work for RPS this year. That means days 22-24 are already stuffed and waiting, even though the doors won't open until 1pm on each day. Can you even wait? I bet you can. I bet you don't even care. I've walked right into this.

It's Slay The Spire!

Alec: By a comfortable (or uncomfortable, depending on who I’m trying to justify spending hundreds of hours playing pretend battle-cards to) margin, this is the game I’ve put the most time into this year. It’s inexorably entwined with playing endlessly during surreal days and long nights with baby Imogen snuffling away on my chest in the back half of this year, but obviously I’m not at all massively, helplessly emotional biased in favour of it for that reason.

Spire is endless. By which I mean, it nails endlessness. It’s hard to imagine a point at which I’d be tired of what it does, all the hundreds of permutations upon its simple concept of playing cards one after another. It’s like saying I’m tired of eating when someone’s just gifted me a Deliveroo subscription that guarantees a different cuisine every day for a year. (Can someone please do that, actually? My Paypal is [REDACTED]).

My gaming highlight of the year is the new-ish third character in Spire, The Defect. I don’t mean the day of their arrival. That day I tried The Defect out a couple of times, was roundly murdered and so muttered darkly to the cat about how a great game had been ruined by pointlessly fiddly additions for the hardcore gonks. 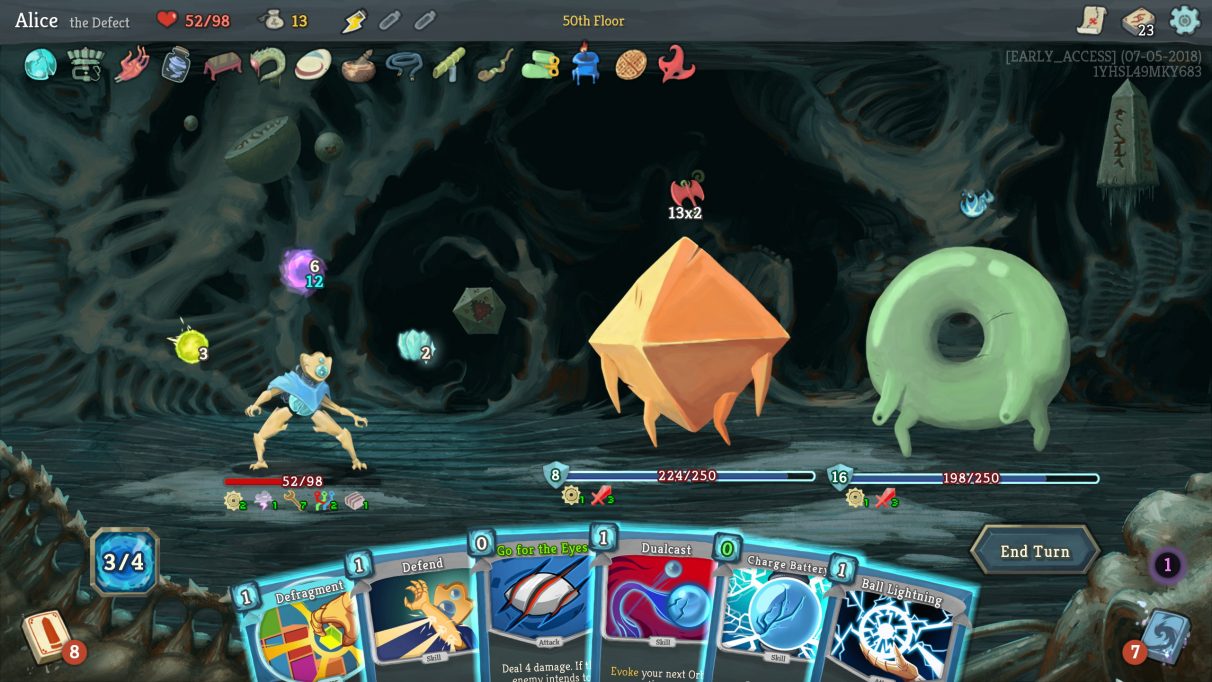 I mean the day a couple of weeks later, when I came back to Spire after my sulk had abated, and – hello yes I was a student in the 1990s – I saw the Matrix. I’d been trying to play The Defect as I would the Ironclad or Silent, which, well, is about as sane as trying to play the Silent like the Ironclad. Slow learner, me. So instead I played The Defect like The Defect, and all these new permutations revealed themselves, and I was in love all over again.

Which is the essential beauty of Spire, in a way. This wee-small card-battling thing, with ‘just’ three characters, but each of those characters feels like its own game entirely. And – still! – whichever one I choose, it feels like a brand new game. Impossible stakes. The glorious revelation, every time, of card combinations or outrageously risky strategies I hadn’t even considered before. The drama, the shoulder-shaking highs of triumph, the bollock-throttling shock of loss. 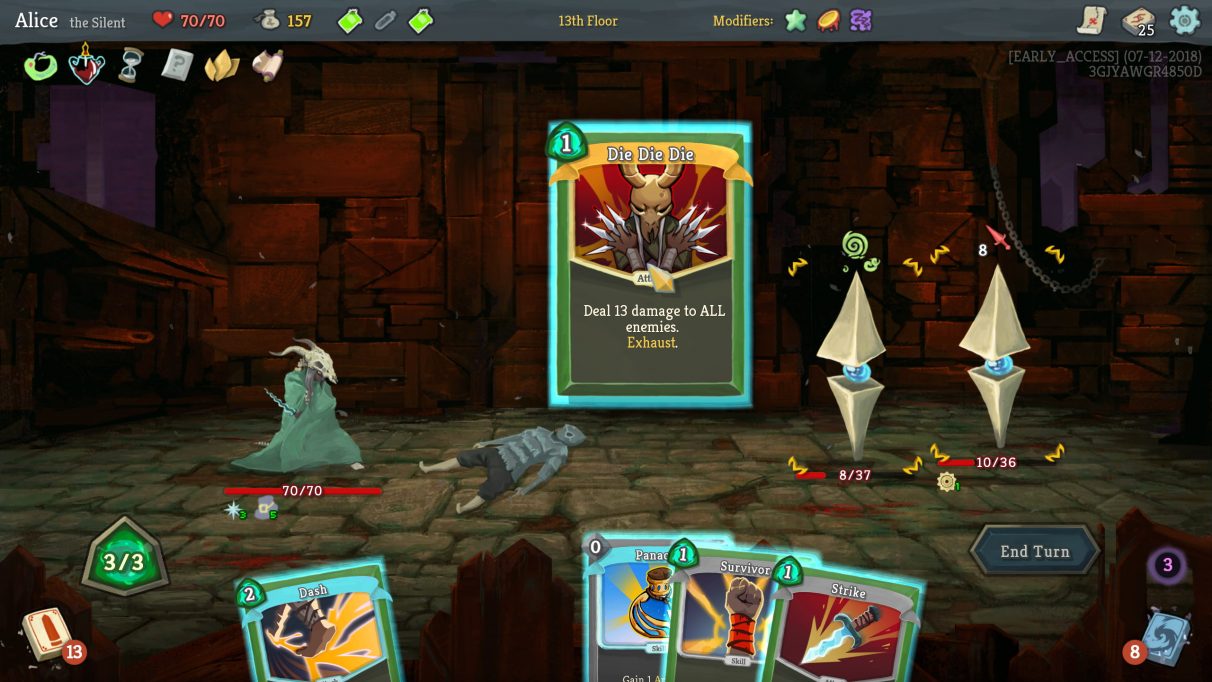 Brendan: Slay The Spire was tested on Netrunner prosand it shows. Or rather, it doesn’t show. Because it’s easy to notice when a game has all the wrong numbers living in its guts, yet perfectly invisible when those numbers are exactly right. This card-flinging strategy game has some good numerical gut flora is what I mean. Okay, let me put this another way. It is the videogame equivalent of one of those little eagles that balances on the tip of your finger by its beak. It looks like it should fall, and yet it stays. I’m trying to say it’s a perfectly stabilised work of art and numbers. Will you please just keep up with these metaphors? Honestly.

I know the numbers hiding under these cards are painstakingly tuned because if I don’t play for a few months, and then come back, the smallest differences feel radical. A card that once cost 3 pips of energy suddenly costing 2 pips makes my eyes bulge like two ping pong balls. It shouldn’t. I mean, what a tiny change, what a miniscule tweak. But that one point of energy, guys. That one energy. That’s going to change everything.

Matt: I’ve spent years hearing people talk about games they wished they could tear themselves away from. Games like yawning black holes, sucking up any free time were silly enough to let near them. That had never happened to me: I’d played some games plenty, sure, but not to the point where I felt guilty. Then I met the Spire.

Gosh, it felt good. Every decision was worth savouring, every card choice building towards decks that could wind up being criminally powerful or pitifully weak. Each turn presented a fantastic mini puzzle, a test of priorities and possibilities. I relished the learning, the gradual march towards mastery over a machine powered by never-ending surprises.

Eventually, of course, the surprises stopped. But I didn’t. Evening after evening, I’d find myself plugging back in. Ascension mode, where each victory piles on another handicap to an ever-growing tower, no longer felt painful or gruelling. It gave me another goal to work towards for another hundred hours, and I was grateful. At first. 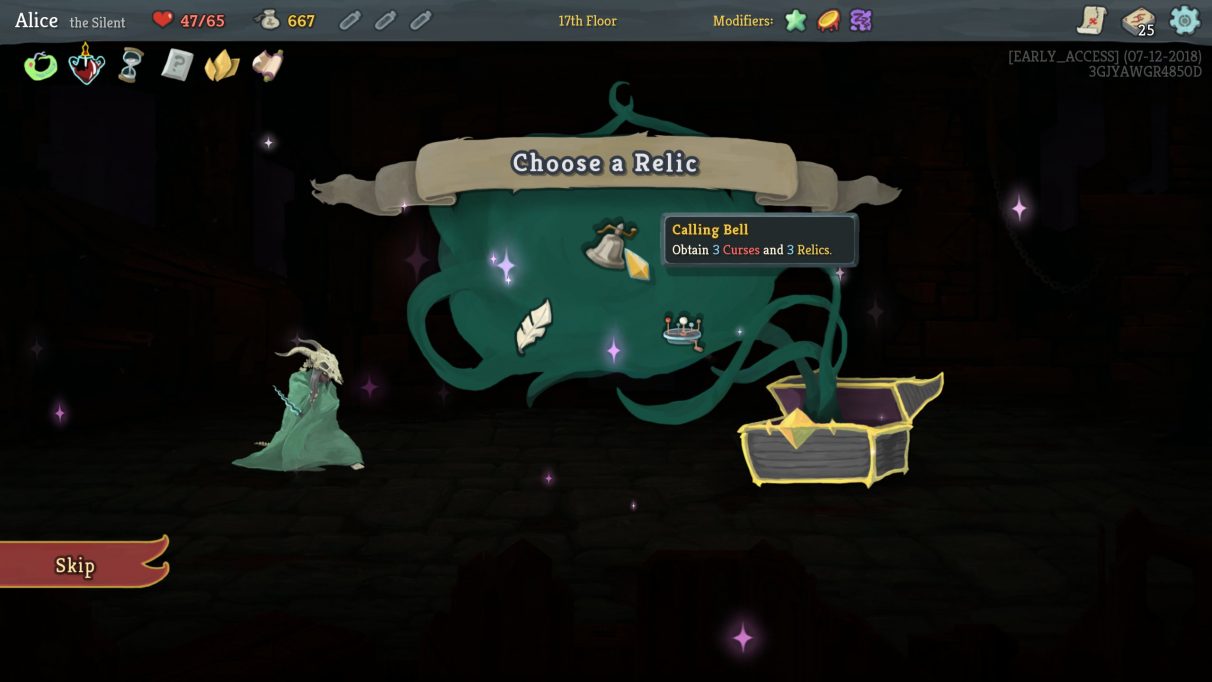 There’s something about Slay The Spire’s intricacies that stop it feeling stale. The near-weekly influx of new items and encounters have been part of its pull this past year, but I think I’d have kept playing without them. I’d have still felt that urge to start yet another run, to spin its wheels and try to make my fortune where they landed.

Because that’s the secret: two-tiered compulsion, two layers that bolster and merge into each other. Every shot at the Spire is a gamble where success lies at a confluence between skill and luck. Victory always comes as a result of well made decisions, but those decisions aren’t always there to be made.

In other words, it makes you feel like you have more control than you actually do. There are many factors that make Slay The Spire astounding, but that’s ultimately what makes it so compelling.

I’d recommend it in a heartbeat. Just don’t fall into the same trap that I did.

Alice O: Hi, sorry, I should have written something here because I'm always going on about how much I adore Slay The Spire but I was too busy playing Slay The Spire. Okay, sorry, bye.