Roguelike card game Slay the Spire has swept through the RPS dungeons like a powerful disease, covering us in tiny, number-shaped pustules. In search of a cure, we spoke to its designers, Anthony Giovannetti and Casey Yano of Mega Crit Games. Read on to learn some of their methods and future plans. We've already told you they'll “almost certainly” be adding more characters. But did you know they tested the game on expert Netrunner players?

For strangers to this card-collecting crawler, it’s a single-player roguelike about ascending a horrible spire, either as the sword-wielding Ironclad or the poison-toting Silent. You battle monsters by throwing cards at them, and build your deck as you go. Anthony Giovannetti and Casey Yano are the principal designers, two developers who first met in college. After some time in the wilds of the software industry, they reconnected and started work on the game.

Giovannetti is a massive fan of Netrunner, the asymmetrical cyberpunk card game that’s played in person, rather than on PC (artwork pictured below). He even runs a fansite about it, stimhack.com. This has been a benefit, he says, when designing the tightly woven card sets for their odd heroes.

“I’ve basically always been a pretty huge card game player, that definitely influenced me,” he says. “And I think Netrunner is pretty superbly designed.

“It was useful because since I’m part of the really competitive, top-tier community in there, I was able to reach out to some of the best Netrunner players, and have them playtest our game and get feedback really early on. I think that was really useful, especially when we were starting out and prototyping and just kind of finding our place.”

But even Netrunner has its problems. Like many card games, it can feel bloated or packed with filler. Will Slay the Spire eventually become similarly bogged down, or will they reach a point where they decide: ‘okay that’s enough’?

“Well,” says Giovannetti, “we definitely don’t want to put too many cards into one colour for that reason. So right now we have about 75 cards for the Ironclad. If we just bloated that out to 200 cards for the Ironclad, then you would have no ability to make any planning at all. And we think that would be a much worse experience. We are much more likely to make more characters and just give them all unique card pools, or do things that let you change your card pool around. 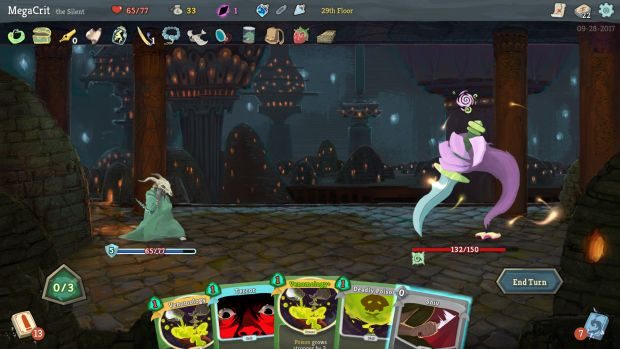 That third character is still behind a lock, however, and still being pieced together. I’m curious about what this next monster-killer might look like, what tricky cards they’ll have hidden under their robes. Sadly, the designers are staying tight-lipped about it for now, even though they have a “design direction” figured out.

“It’s not a character that was done on release,” says Yano, who works on the game’s art as well as programming. “I think… that people are assuming it’s done and we were going to release it like a week after the early access launch or something. We’re getting some weird vibes like that. But it’s definitely something we’re working on after we went to early access. So until it’s ready for primetime, we can’t really reveal it. And I think we’re definitely not trying to spoil it in any capacity. That’d be a bad move for everybody.”

I wouldn't want to guess at the new character's appearance. The monsters of the Spire are oddities, surreal rats with mushrooms growing out of them, conch-like metallic beasts that wake up from a peaceful slumber and suddenly grow insect legs. Some enemies are just weird shapes mashed together. Why does Yano illustrate the creatures this way? 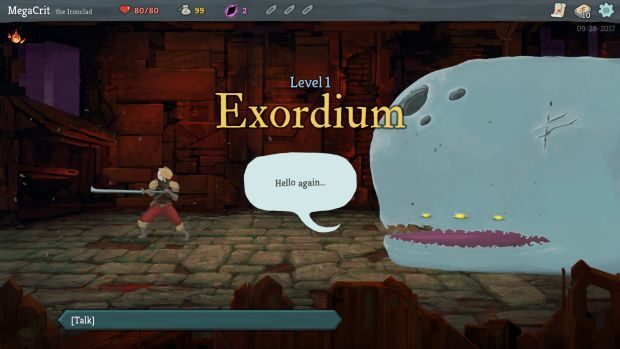 “It actually really irks me when I play a really generic game,” he says. “That’s a pet peeve… We just started drawing some characters for the game initially, and it just didn’t look very interesting. It was like, all right, let’s get a warrior or a zombie in there. And I was like: ‘Ah, this doesn’t really stand out’. So I started drawing weirder characters, and I was happy drawing stranger characters.”

Giovannetti chips in, talking about their early prototypes. At one point in their work, Yano made a clear example of those plain, clichéd baddies they ought to avoid.

“Casey, he pulled up some games on Steam and was like: ‘All right, see this right here Anthony, look. We need to definitely NOT do it like this. We don’t want anything to be so generic that it’s just another X or another Y.’” 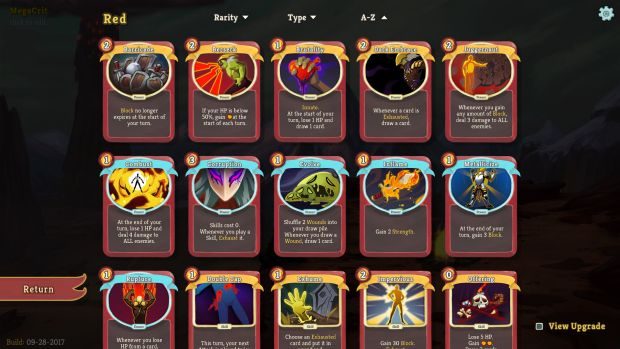 They both live in Seattle, Washington but usually work apart. However, they’ll meet up on what Yano calls their “intense design days”. These are days specifically set aside to throw ideas around.

“We sometimes generate upwards of 50 card ideas and 20 enemy ideas in a single day,” says Yano. “And on those more intense days, we talk about the kinds of enemy and what kind of characteristics they would have… and those abstract concepts have to be translated into monsters. The design comes first, and then the enemy. And then the art is kind of made for the design, instead of the other way around.”

One enemy that has frustrated the spire slayers in castle RPS is the Time Eater, a hunchbacked slug who punishes you for drawing lots of cards. He gets stronger the more cards you play, feasting off your momentum. Both Alice and I faced him with high energy builds, only to have our diarrhoea decks turned against us. Are they doing this to us on purpose!?

“Currently,” explains Giovannetti, “when you reach the boss section… if you have not fought a boss yet, it will put that one in [one you haven't yet faced]. So the first time you go through it, there’s an order. And after that it’s totally random.

“We’ve had people go: ‘Oh if I'm playing a Shiv deck that plays a million cards, are you forcing the Time Eater in there, because I swear I’m always fighting the Time Eater when that happens’. And that’s not the case. It’s actually totally random. It just seems that way.” 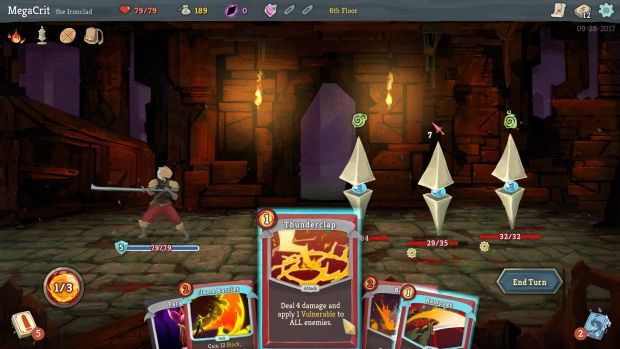 I’ve yet to conquer the clock slug, and haven’t unlocked all of the cards yet, but I still feel like I’ve seen most of the game. Other players might feel the same. However, the designers have plans for more cards, enemies and relics between now and a summer release (you can read their roadmap here), among other things.

“Potions are definitely getting a huge bump,” says Yano. “We could have a potion that’ll let you upgrade stuff, or transform stuff, or let you escape... I think currently the concept of what the potions do are very vanilla, so there’s a lot of leeway for that.”

“We also want to add a lot more events to the game,” adds Giovannetti. “Especially ones that are kind of like the vampire event, where they’re very transformative to the play experience when you get them. That’s a good example of the kind of event we want more of...”

With Netrunner as an influence, and its players as a testing ground, Slay the Spire has the potential to keep adding characters and cards, at least until the mental bank full of surreal and monstrous shapes dries up. But its pair of designers also seem to want to distance themselves from some characteristics of the CCG – the bloat, the filler, and, most importantly, the cost.