Door 19 doesn't have a handle, you have to live that chrome life and jack in to unlock it with your preem quickhacks and look I'm running out of the jargon just open it, you know what it is.

Graham: Cyberpunk 2077 is a buggy mess, and a trash RPG, but that doesn't reflect the thrilling experience I had while playing it. It's a game that does quiet and loud very well.

Night City is loud: a big, brash, cacophonous metropolis, that's one of the best open worlds I've ever explored. That it's also one of the most fragile - the more you try to interact with it, the more it falls apart - ultimately doesn't matter to me. As a place to explore and look at, it's glorious, particularly if you ever squinted at drawings of Mega City One as a teenager and longed to see more.

The quiet is even better: Cyberpunk 2077 has some of the best conversations in any game. Late at night around a campfire, or squeezed into a booth at a blaring nightclub, or on a long, rainy drive across town, dialogue is allowed to stretch out, relaxed and personal. I finished the game with a dozen characters I liked and wanted to spend more time with. In a medium where NPCs are often little more than deliverers of exposition, or simply terrible assholes, Night City's residents are unusually human. 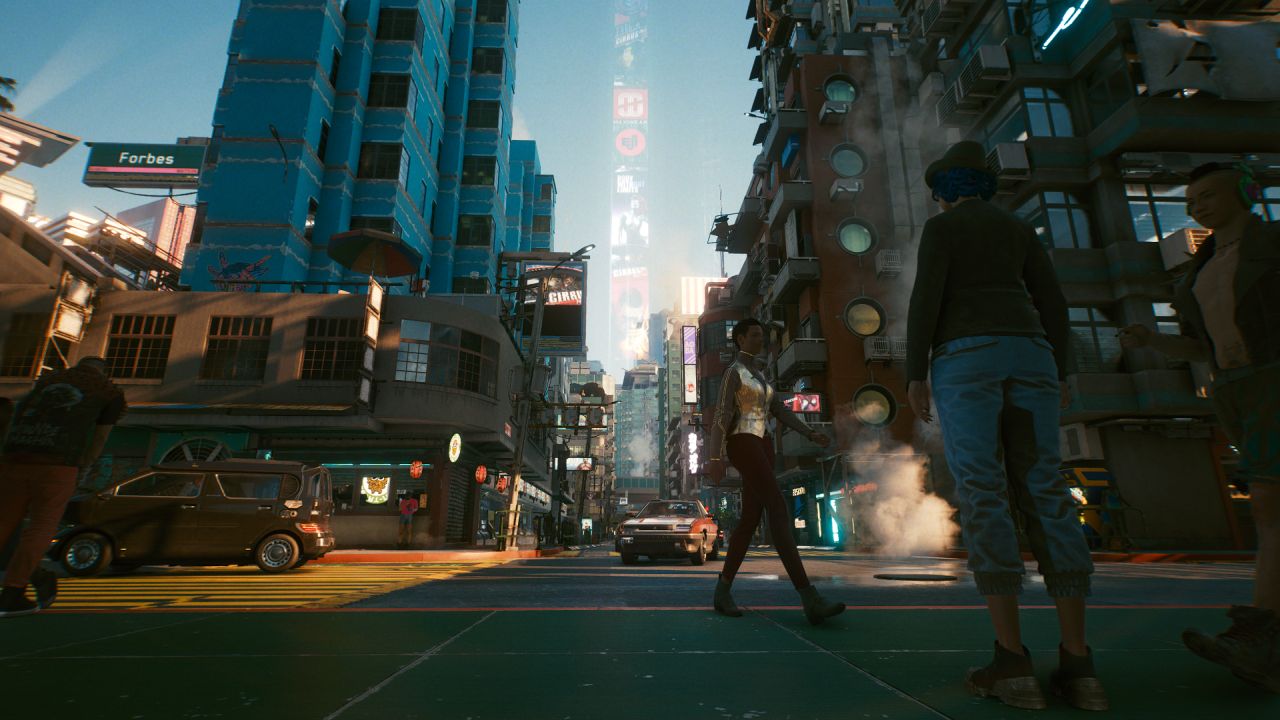 Alice0: Bug fixes cannot make Cyberpunk 2077 a great game. Too much is fundamentally a bit crap. Stealth feels perfunctory without interesting consequences and escalation for mucking up. Skill trees are bloated with uninteresting 2% boosts. Sifting through a deluge of random guns for ones that fit my style is boring. Crafting specific guns is a huge chore and unreasonable stat point investment. Buying anything in a shop is 1) outrageously expensive 2) almost pointless because you'll soon find something better. The consequence of breaking the law is either losing a minute of my time in a boring way or reloading my last save. The game has so much wonderful fashion but it's wasted because clothes are tied to stats, so V ends up dressed like a drunk toddler and finding a good-looking garment is only disappointing. Ah, I've so many more aspects to gripe about but they come down to: it's at the intersection of The Elder Scrolls, Grand Theft Auto, and Deus Ex in a configuration that does not mesh well. I'm still hugely enjoying myself.

Night City elevates a janky-but-interesting 7/10 into a game I've already played more this year than anything other than Destiny 2. God, I adore Night City. I grew up with Judge Dredd, trash dystopian B movies, the 90s game Quarantine, and industrial music growling about sticking it The Man, so I was bound to have a soft spot for it all. Cyberpunk 2077's realisation of these aesthetics and ideas is more than I'd hoped for. It is, as Alice Bee has already said, a right looker. It's so big! It's so garish! Everyone is so weird and colourful! It's so messy! It's all so much! As long as I don't move slowly enough to see the stupid NPC behaviours and technical limitations, I am delighted drowning in the noise as I barrel through alleys and under concrete canopies.

What's especially pleasing is that we're free to explore so much. You can climb a whole lot more than you might think, especially once you get the double-jump legs. I rarely ever drive or use fast travel because running through Night City is a treat in itself.

Night City elevates a janky-but-interesting 7/10 into a game I've already played more than most this year.

I can't tell you how Cyberpunk 2077 will end up. I imagine bugs will eventually be squashed. Beyond that, I do half-expect CD Projekt Red might eventually relaunch it with a load of features overhauled and expanded in a huge 'Enhanced Edition' update, like with their first two Witcher games. Even if they don't, I'd be happy with this as an expensive walking simulator. Oh, but yeah, I do quite like the cyberpunk detective story running through it all so far and the cyberpals I'm meeting. Wouldn't really know - my attention is obviously elsewhere.

Ollie: As I watched the end credits roll after my first playthrough of Cyberpunk 2077, I felt a bit empty, a bit dejected. I thought at first it was because I'd rushed through the game and didn't get to experience it properly. I also thought I was disappointed that the game wasn't better in nearly every way. Both those things were true, but as I sat with my thoughts, I realised that the real reason for my despondency was that I actually missed the characters. In a very small way, I was mourning the fact that there were no more experiences to be had with them.

Yes, I'm talking about Judy and Panam. Both are treasures, and I won't hear a bad word against them. Their stories were startlingly hard-hitting, and the quests involving them were absolutely the highlights of the whole game. They felt like humans who had experienced pain and loss and hardship, and still managed to keep their heads high and help out those in need. They wanted above all else to support, and to feel supported. Any moment with Judy or Panam was guaranteed to be a high point in terms of writing, voice acting, and player immersion. Not since Pyre have I felt such pain at the prospect of having no more interactions left to explore with characters in a game. For all its flaws, Cyberpunk 2077 deserves a spot on the advent calendar for this in my book. 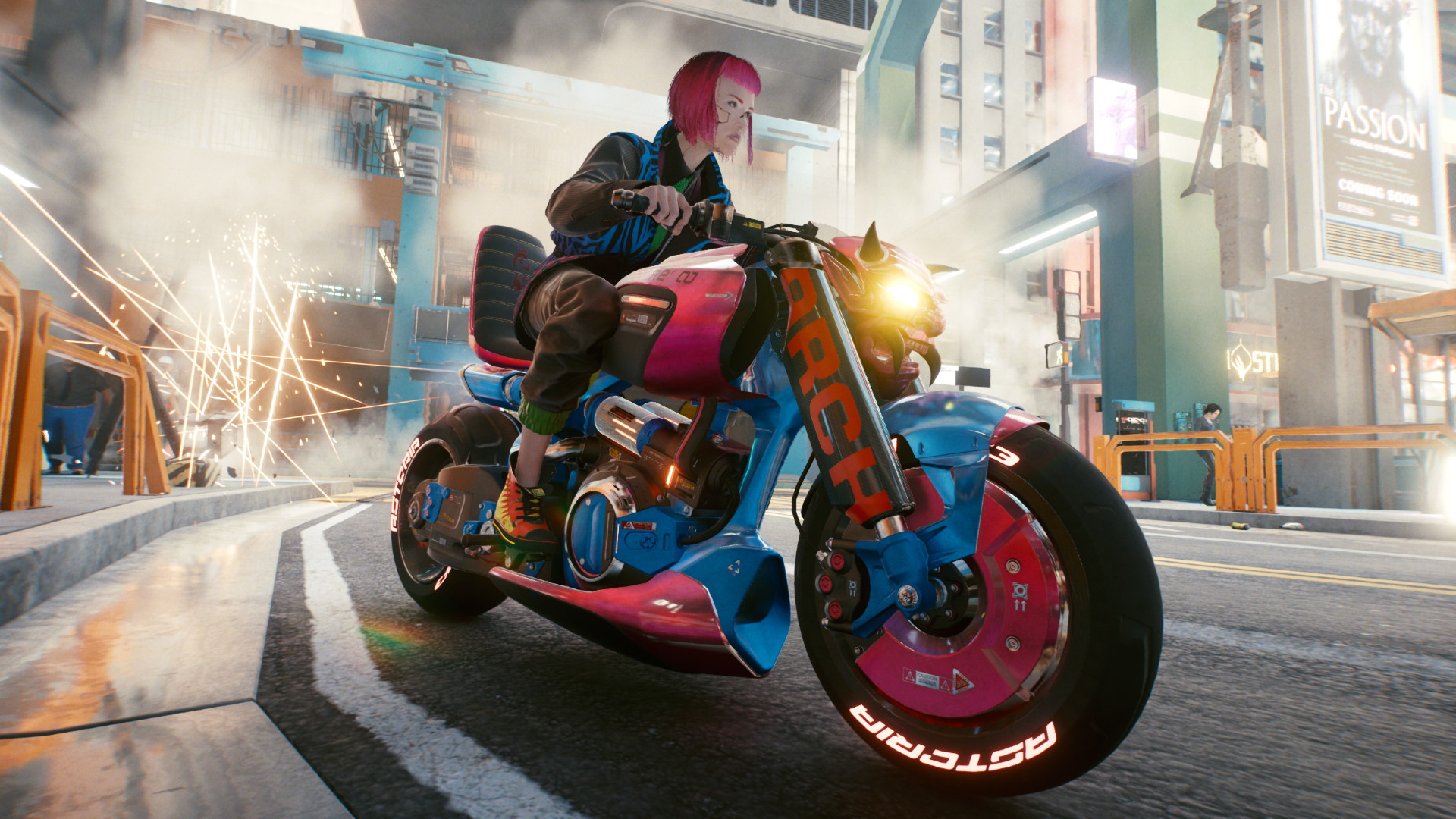 Alice Bee: Your flat has an entire separate room where you keep your weapons, but a burrito vending machine in it in lieu of a kitchen. I approve of this kind of forward thinking design. Imagine V bringing a date back there. "We're having burrito for dinner. Again. Lol. Don't go in there, that's where my guns sleep."

I have a lot of problems with Cyberpunk. I see a lot of people saying it's "fine" on PC, but it's... it's not. It seems to spend most of its time trying to annoy me while I'm playing it, like a really cute puppy that keeps peeing on your carpet - but I knowingly brought the puppy into my home. Last night I called my car to me and it spawned with a truck sort of half in the back of it. I approached with extreme caution. Then, just as I was about to get into the car, the truck exploded out of the back and half of my car's doors fell off. Even if Cyberpunk didn't have bugs, loads of, just, the core systems are well on the wonk, as the others have said. And unlike the others, I have found the story to be poorly paced and shallow so far.

This seems to be the common experience from people I have spoken to. Like, we complain about all of Cyberpunk 2077 loads to each other and then go: "It's good though, innit?" (I understand this is the same as the relationship that fans of The Walking Dead have with The Walking Dead). I think if you understand that before you play it, you'll be fine.