Matt and Nate have been playing Ancient Enemy, a singleplayer card battler that looks a lot like a murderous version of Majhong, with a dash of Slay The Spire. It’s made by Shadowhand developers Grey Alien Games, and also RPS founder Jim Rossignol, but let’s not talk about him.

Nate: “Uno, but the Banner Saga”. That’s my take. It’s a game about knocking cards off a big pile, based on which ones have numbers one lower or higher than the one you’re holding. But you’re a depressed, tired wizard.

Matt: Can we talk about the wizard first? I want him out of the way. He’s a resurrected mage from olde times, now back to undo the apocalypse. The entire story is him just rolling up to places and saying something dreary about how alone and sad he is. It’s a shame, because I was interested in the idea of exploring British folklore, but wound up skimming past pretty much all of it. Once you’ve seen one fungal boar, you’ve seen them all.

Nate: I mean, it’s good melancholy! It’s probably not cool for me to praise it too highly, cos of the aforementioned thing about who wrote it, but it’s properly forlorn and really sets the mood. That’s why Banner Saga came to mind, to be honest. Though I do agree with you; the whole thing about corrupted fey creatures was really interesting, and I kept hoping it was going to plunge into full bizarro Arthurianism, but pretty much the whole story comprised scene-setting vignettes.

Matt: That wasn’t the only way it failed to blossom into something more, sadly. I did enjoy myself overall, but murder Mahjong gets awfully samey. The flow of useful new tools and ideas seemed to dry up, and I wound up going into every battle with the same loadout. 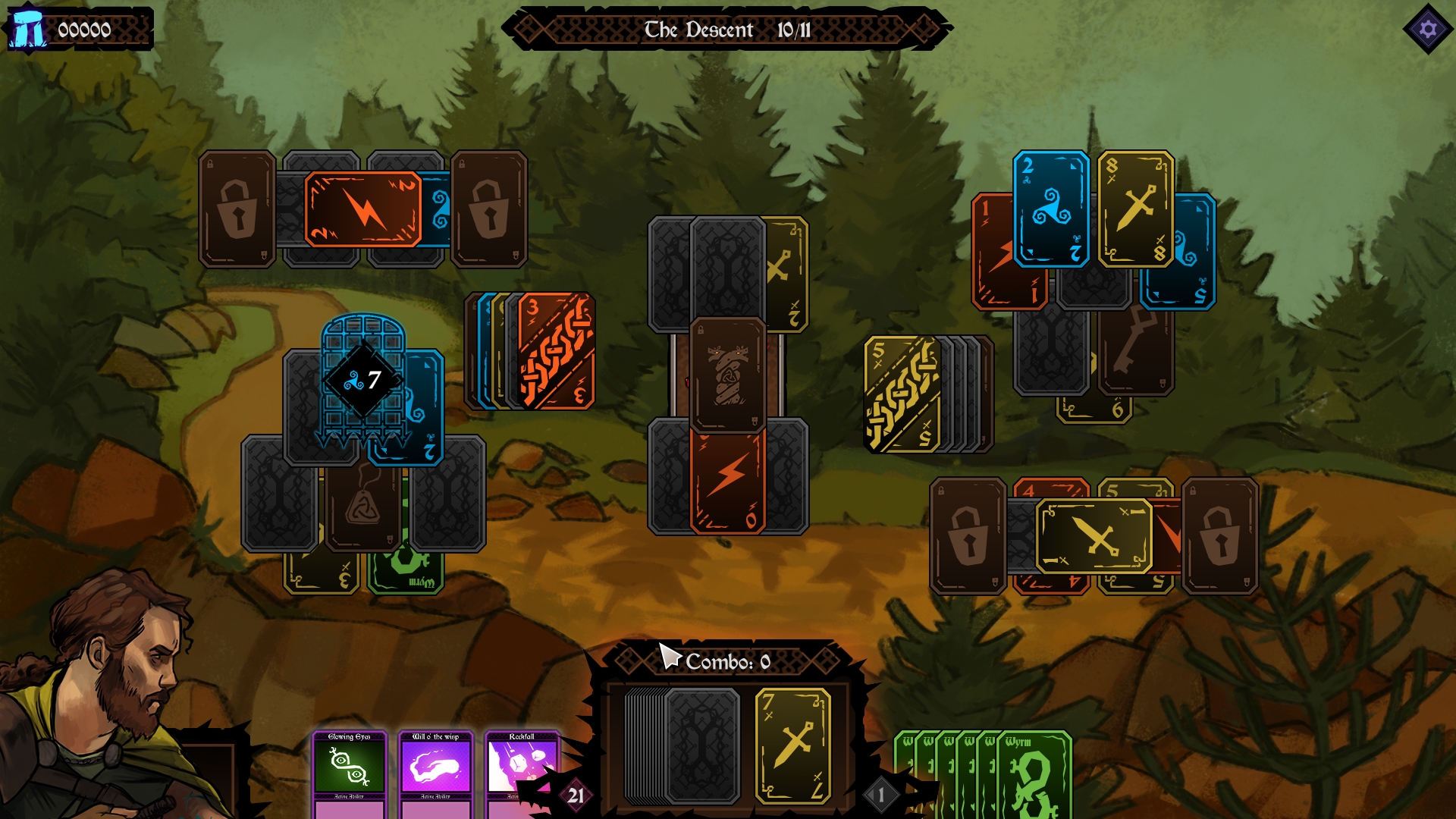 Nate: For me, the whole RPG side of the game felt like a string of wasted mechanics. There were all sorts of different damage types to do and to block, but a relatively limited set of situations where you needed anything more than one or two basic, effective attacks. In the end, switching out abilities was something I rarely had to do, and felt a bit of a chore more than anything else. Certainly, I couldn’t really find any ways to make particularly different builds or loadouts. By the way, did you ever find a different physical attack beyond the basic “stab”?

Nate: Also, the potions and stuff… now, it might just be me, but I find that potions are useless in probably 75% of the games that include them. They always give the impression of being too rare to squander, but then go on to clog up your inventory because you’re hoarding them. And in Ancient Enemy, they have the added downside of ending your turn when you use them - so I found it was almost always a better idea to honk up a big combo to get in a giant attack, than use one.

Matt: Yep! One of the late-game potions instantly recharges your abilities, but why would I ever want to do that when I could, um, charge up my abilities by actually playing the game and building up a damaging combo?

Nate: Right. Pretty much my entire load out was geared towards trying to keep my first round of card-plucking going as long as possible, so as to batter the Frankenstein in question in just one, two or maybe three gigantic strikes. This leads me onto the next missed opportunity - the Slay The Spire-style tells as to what the Frankenstein were about to do next. It was great in principle, but it only mattered insofar as telling me how many turns I had free to go berserk on combos. It only ever mattered if the Frankenstein were attacking - by buffing defence or taking potions, they were just signing their own death warrants. Also, a big combo streak usually involves picking up loads of free defence cards anyway, so even if an attack was in the offing, I’d rarely need to sacrifice an attack of my own in order to block, as I’d always accrue sufficient shielding in the process of charging up my gigastab. 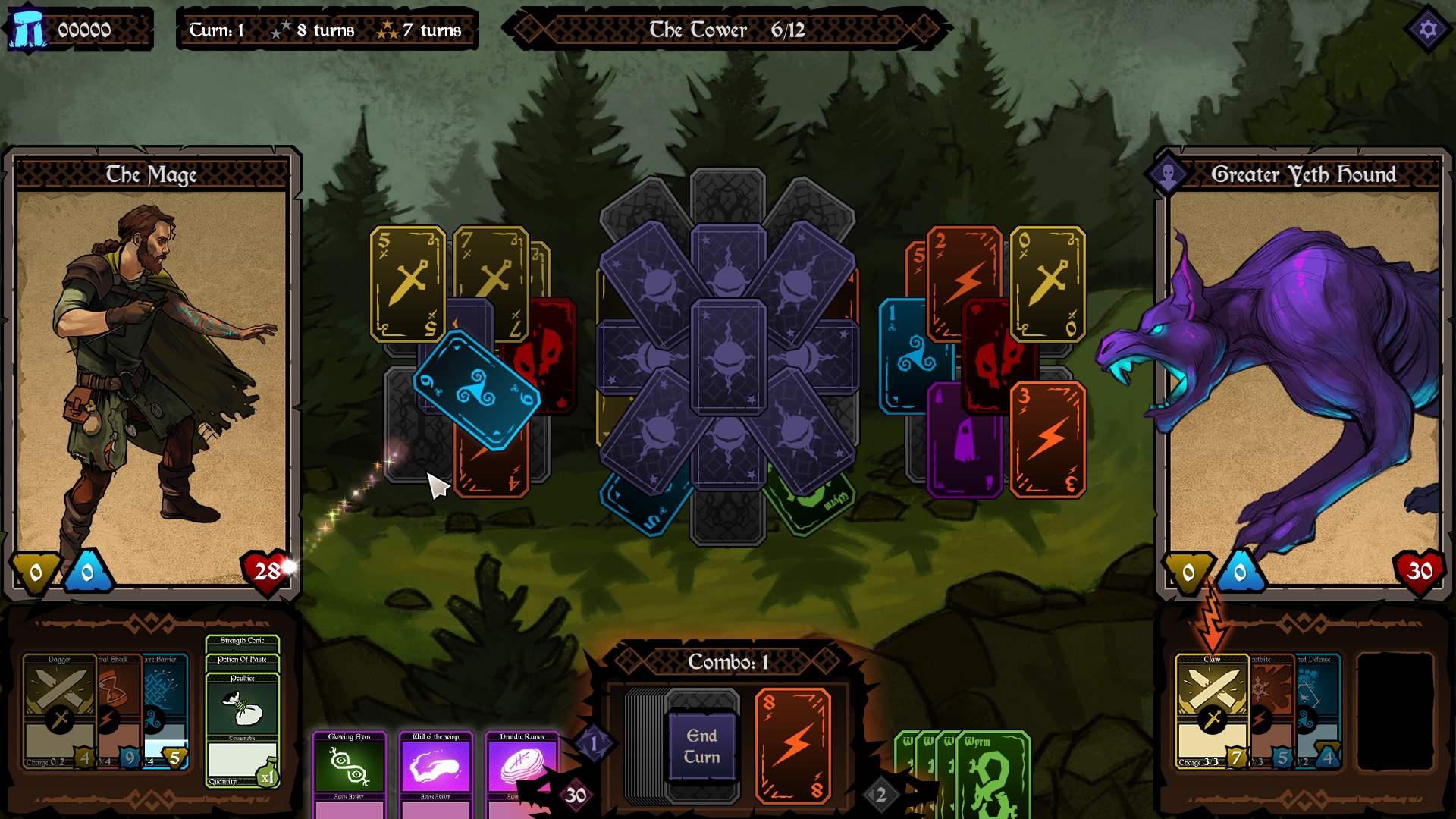 Matt: I’d say that’s all the Slay The Spire injection really needed to do. It lets you sink into those turns that wind up going well, where you wind up in a zen-like state of card-smushing. It’s a specific frame of mind. You start seeing the board in terms of ladders, nudging in points where you can hop on and off by using abilities. I trained myself to look for points where an ability would let spring up to another juicy chain of numbers, for instance, and did have to put some thought into when to best use them. You only get to use each ability once in each encounter, so the decision feels significant.

Nate: And here’s why everything I’ve said so far isn’t really that much of a criticism. Because while Ancient Enemy has more wasted mechanics than a kwik-fit run by pissheads, it doesn’t really matter, as all that stuff is pretty superfluous. What this game really wanted to be was a relaxing, atmospheric card puzzler, but its parents wanted it to be a turn based tactics game, and forced it to do a load of GCSEs it wasn’t really into, like "items" and "skill trees".

Matt: You’re just bitter because you failed RE, clearly. The battles are the best bits! We both agree they’re dressed up in pointless and/or ignore-able faff, but they give you more to chew on than the (equally common) puzzle-y encounters. Rather than biffing a bad, the puzzles are about tearing through cards to unveil items and power-points you can use or invest in future encounters. My problem is that solo-puzzling doesn’t give me enough to think about. There are nuances, with gates that unlock by playing specific card types and a couple other quirks, but without any sense of threat I found myself clicking away on autopilot. 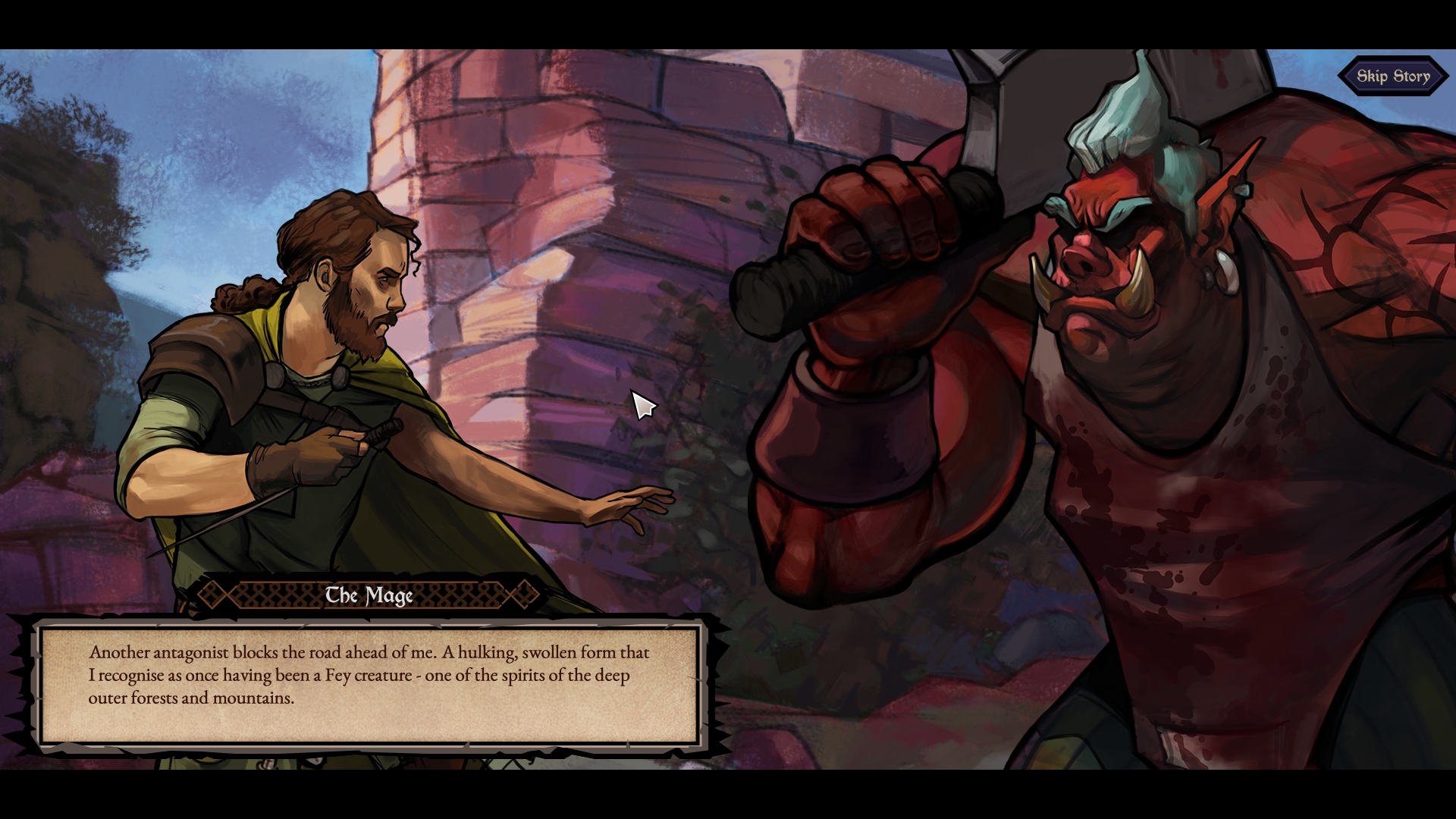 Nate: Yeah, it’s a tricky one. For my part, I would have liked to have seen the narrative woven in to the puzzles a bit more, maybe? Like, when a gate opened, old Misery Wizard could have found - I don’t know - the bum bones of his old favourite hound or something, and had a ghost dog to help him for the rest of the puzzle. And there we are: the puzzle stages were effective but a bit bland, and the fights were exciting but bogged down with unnecessary features. And yet… I really enjoyed it all?

Matt: Comparing games to baths feels a bit rote, nowadays, but I think that’s exactly the type of relaxation you’re describing. I got that too! It feels cosy, predictable, satisfying. But I think for me the water goes tepid too quickly. 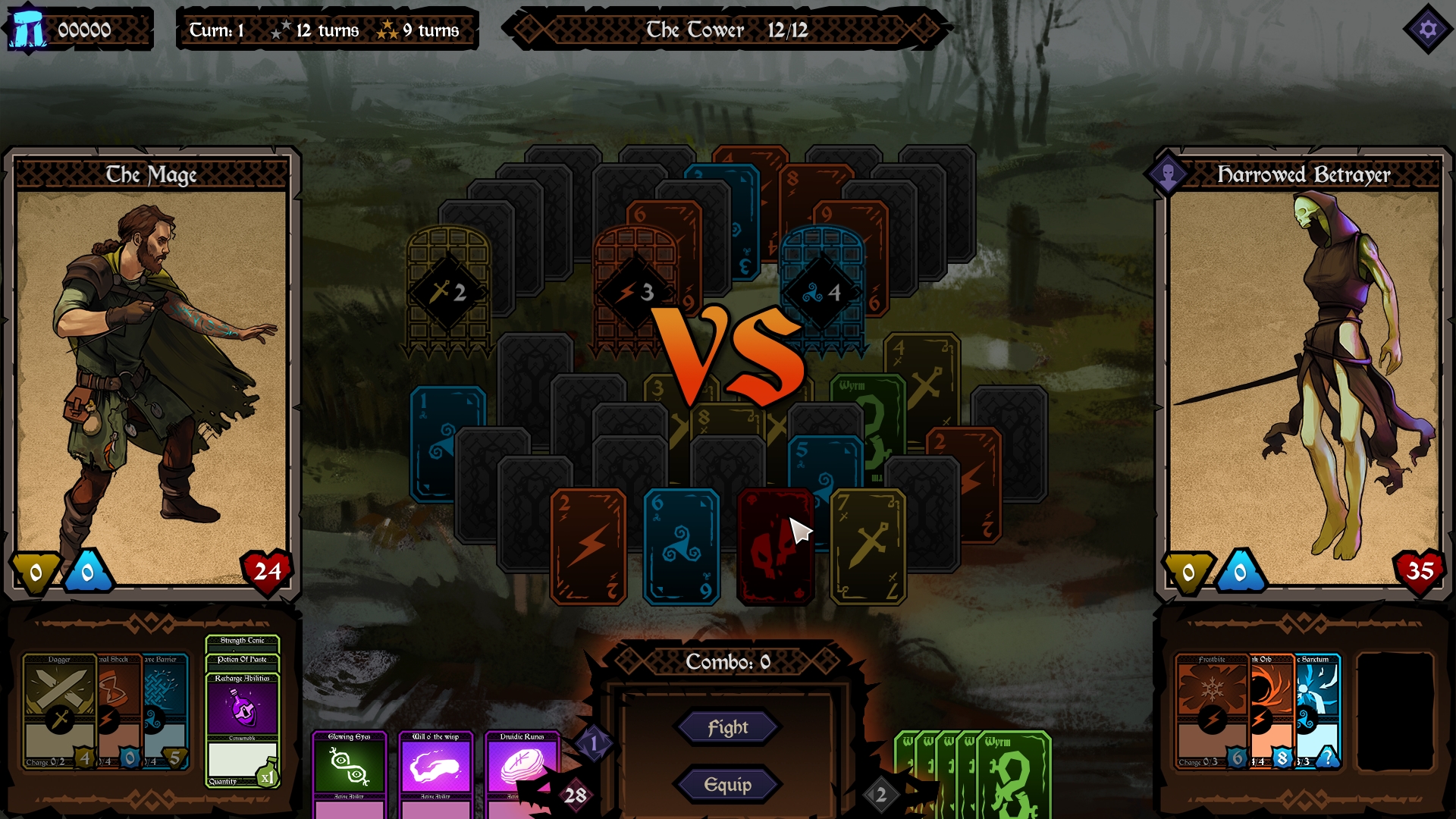 Nate: It’s a recommend from me, but perhaps a situational one. I played through most of Ancient Enemy in one sitting, on a weird Easter Monday stuck inside during a pandemic, and it was just what I needed. This is a time when simple, satisfying, brain-consuming games are worth their weight in gold, and it’s neither here nor there that it fell short of being the next Slay The Spire. The basic card game is a good’un, it’s solidly moody, and that’s enough. My mum used to spend a devastating amount of time playing FreeCell Solitaire on an iPad, and she would have properly rinsed this game. I think it’s a good game for mums.

Matt: It says a lot that you played it through in one sitting, while a chapter every evening was more than enough to leave me sated. But yes, I’m with you on the mum thing. If your mum is into Sudoku or fungal boars, please show her Ancient Anemone.

Disclosure: as mentioned above, Jim Rossignol, a founder of Rock Paper Shotgun, wrote story and dialogue material for Ancient Enemy.