Since there's good odds you're either stuck at home right now or are soon to be, I thought it might do us all good to have a bit of story time. And today, I want to tell you the story of King Beef. It is a tragedy: a tale told by an idiot, full of mace duels and uranium armour, and signifying nothing. Nothing except, perhaps, the psychological dangers of taking social distancing a bit too far. King Beef is one of my personal library of custom RimWorld scenarios, and I talked about it in a post last October. And with the recent release of RimWorld: Royalty, I figured it was the perfect time to wheel out the King once more, and see how he would fare in a galaxy where genuine kingship was now within his reach. He fared appallingly, as it turns out - but let's take a trip together, and find out how: 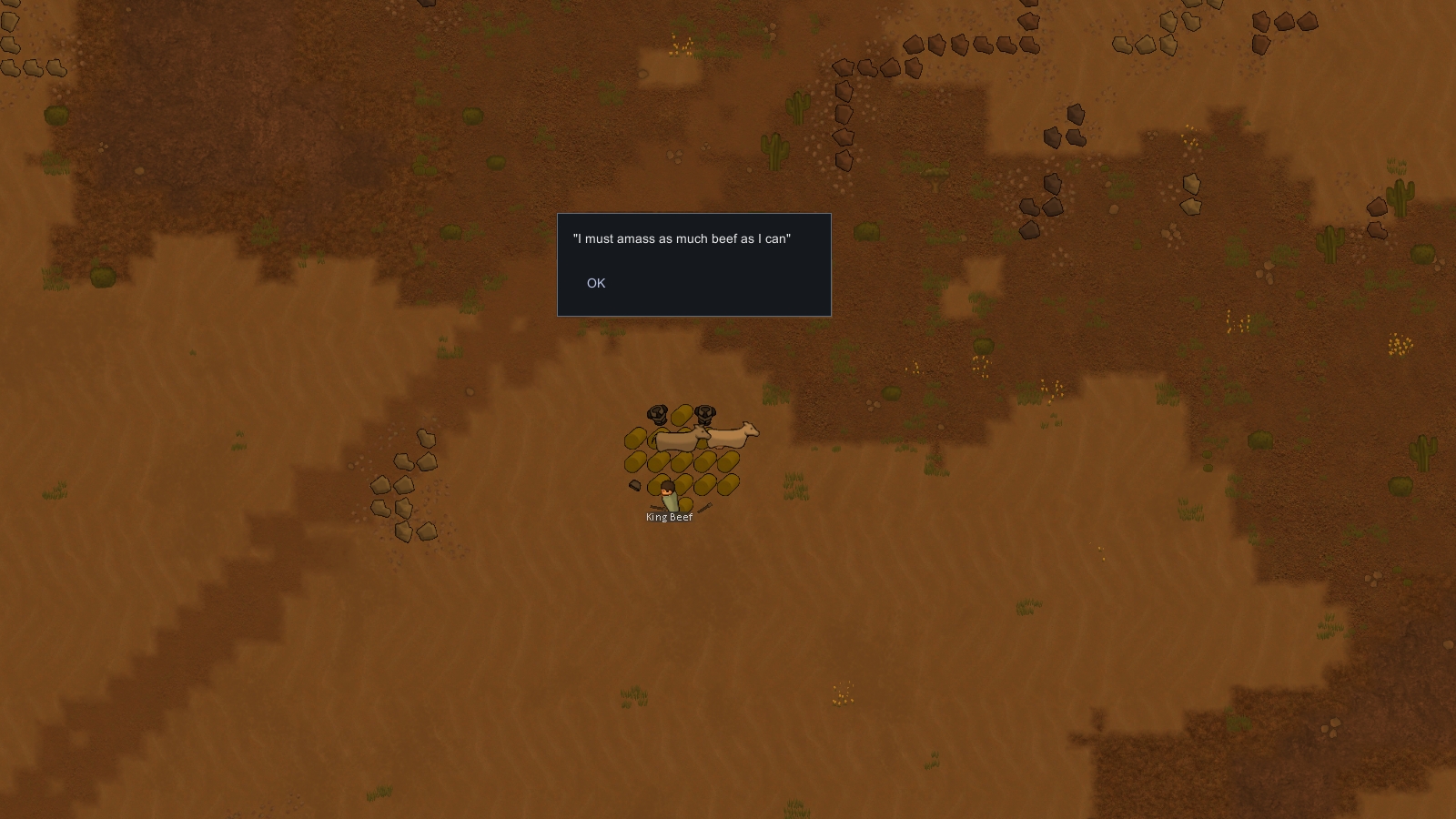 King Beef wakes with a roar of incomprehension, amidst a huge stack of hay. That hay has saved his life. When his ramshackle barnship broke deep and came apart on the void reefs of the Diogenes cluster, its wreck crashed down on an arid nearby moon, and the King would have been obliterated, had he not been having a rage-nap in the feed store for his spaceborne cattle ranch. Looking around him, the King sees that only one breeding pair of his herd have survived the impact, along with his sole possessions - the solid uranium armour and matching mace which, in his eyes at least, proclaim the divine legitimacy of his rule. Plus a spare set, just in case.

Once his shocking new circumstances have filtered through the hosepipe-like tangle of his brutish nervous system, the King has only one thought: "I must amass as much beef as I can". With his mission set, our monarch gets to work - but while he sets to it, we should find out more about the man himself. Who is King Beef? 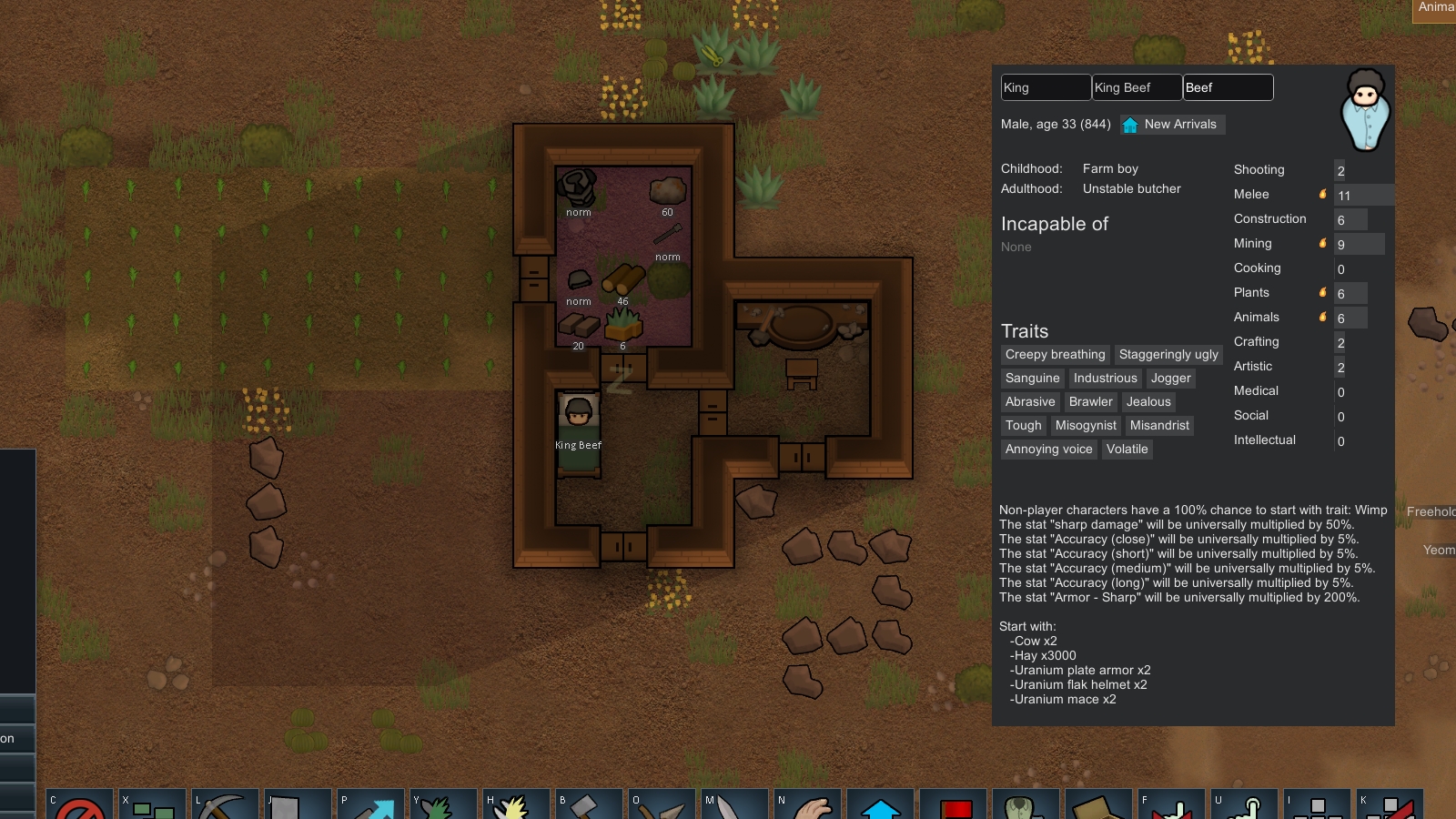 King Beef is not a complicated man. He is a farmhand who became a butcher. A butcher who became an astronaut. An astronaut who found a mace forged from uranium, and lost his mind on the black edge of space. With nothing but his herd for company, King Beef has paced the deck of his fusion-driven barn for 33 subjective years, but thanks to the reckless shortcut through the Diogenes cluster which brought him here, relativistic distortion has meant that his life has spanned nearly a millennium of objective time. King Beef neither understands, nor cares about, that.

Also on the list of things King Beef doesn't care for are: other people, social convention, and the concept of "having enough beef". On the list of things he does care for are just two items: being strong, and acquiring a huge quantity of beef. Item one is covered, at least, as he still has his strength. Beef is an ungainly colossus of a man - wearing his massive, unpowered armour all day every day has made him something like a hybrid of Geoff Capes and a rusting JCB digger, and thanks to the low gravity of the moon he has landed on, everyone he might encounter here will have the constitution of a bag of quavers, when weighed against his enormity.

But to maintain his horrid power, the King must have Beef, and so he has begun constructing a ranch. Although he has landed in a completely barren landscape, he has found a few saguaro cactuses, and felled them to make a simple cabin, where he can cut boulders into rough-hewn blocks for further expansion. As the cows nibble at the hay mound outside his door, King Beef settles into his cactus-wood bed (in full armour), and dreams of gravy. 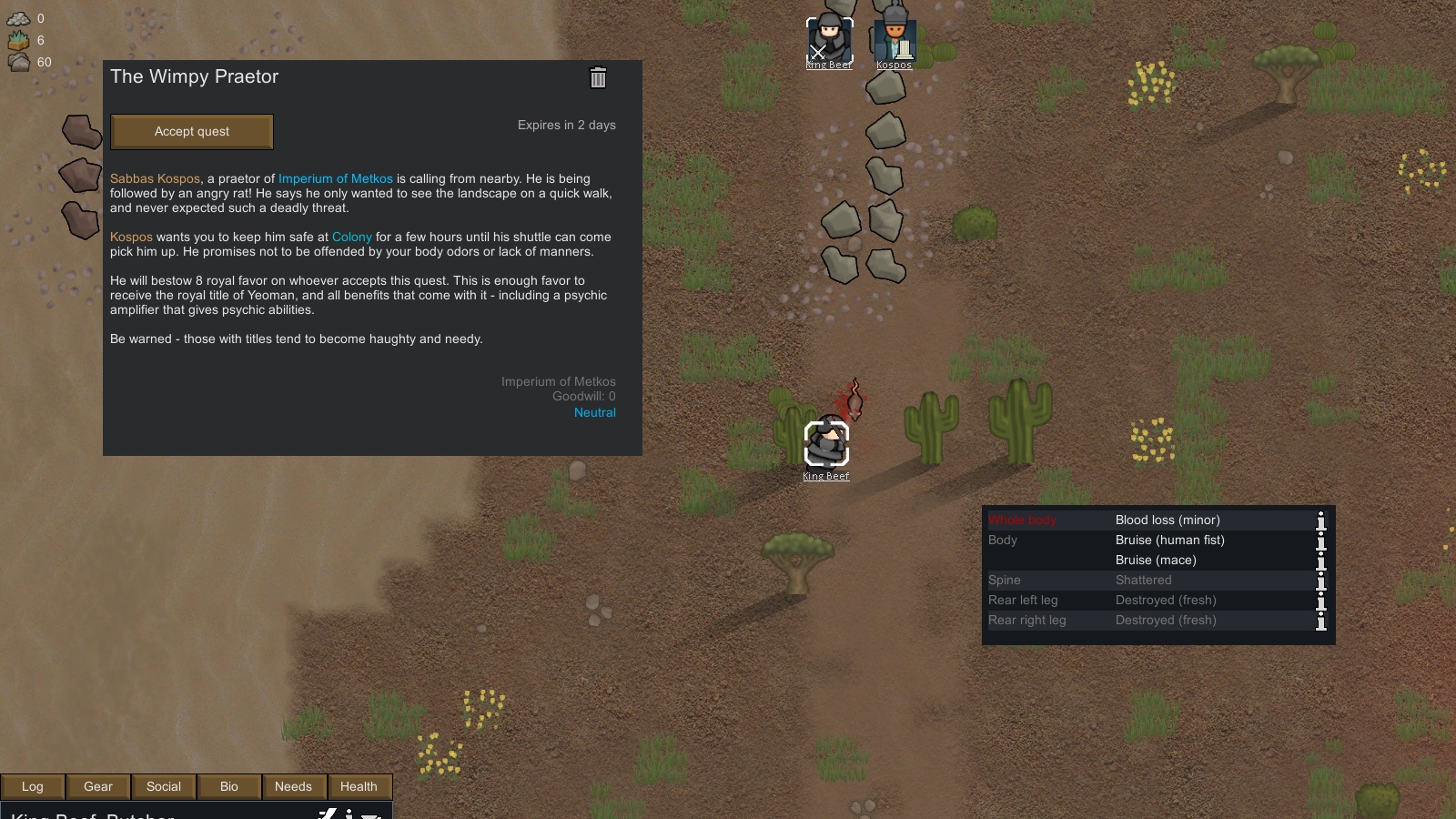 After three days, the King has managed to sow a corn field, and pile up enough slate blocks to create a crude hay store. He is just considering expanding his own quarters, when he receives a call on his Nokia 1100 (his ringtone is the theme from 'Gladiators'). The call is from Sabbas, a Praetor of Metkos - the decaying empire which oversees the local systems. Enfeebled by the moon's low gravity, Sabbas is being pursued by a... rat, and begs shelter at the King's homestead. Beef obliges wordlessly, trudging past the panting, terrified officer, and annihilating the rodent's entire back half with a single, passionless swing of his uranium bludgeon. The Praetor is unnerved, but rewards King Beef with the official title of Yeoman of Metkos, and a psychic implant that gives him the power to ignore pain. The King is pleased. 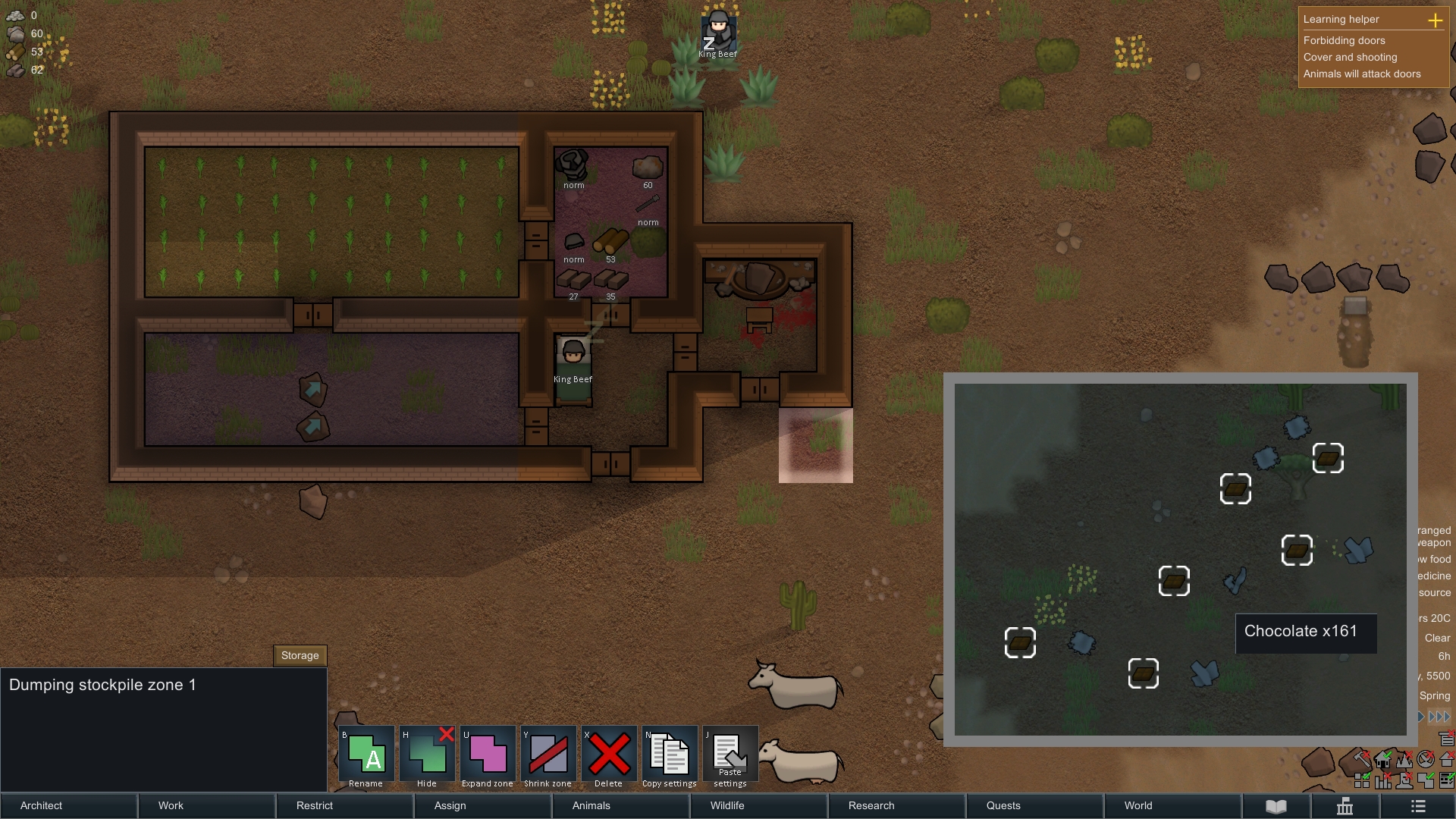 On the day he plans to finally move his hay stock into the new slate barn, the King wakes to find that a confectionery freighter has fallen foul of the void-reefs, and has scattered 161 delicious chocolatey Space Bars over the nearby desert. This is a welcome relief, as he has been sustained up until now only by foraged agave fruit and a single, half-flattened rat, and he gurgles with sullen satisfaction as his brick-fingered hands scoop the bars from the sand. The chocolate bars are molten inside their wrappers from the thirty degree heat, but King Beef is the sort of monster who doesn't enjoy chocolate from the fridge, and just squirts them into his mouth like grim toothpaste. 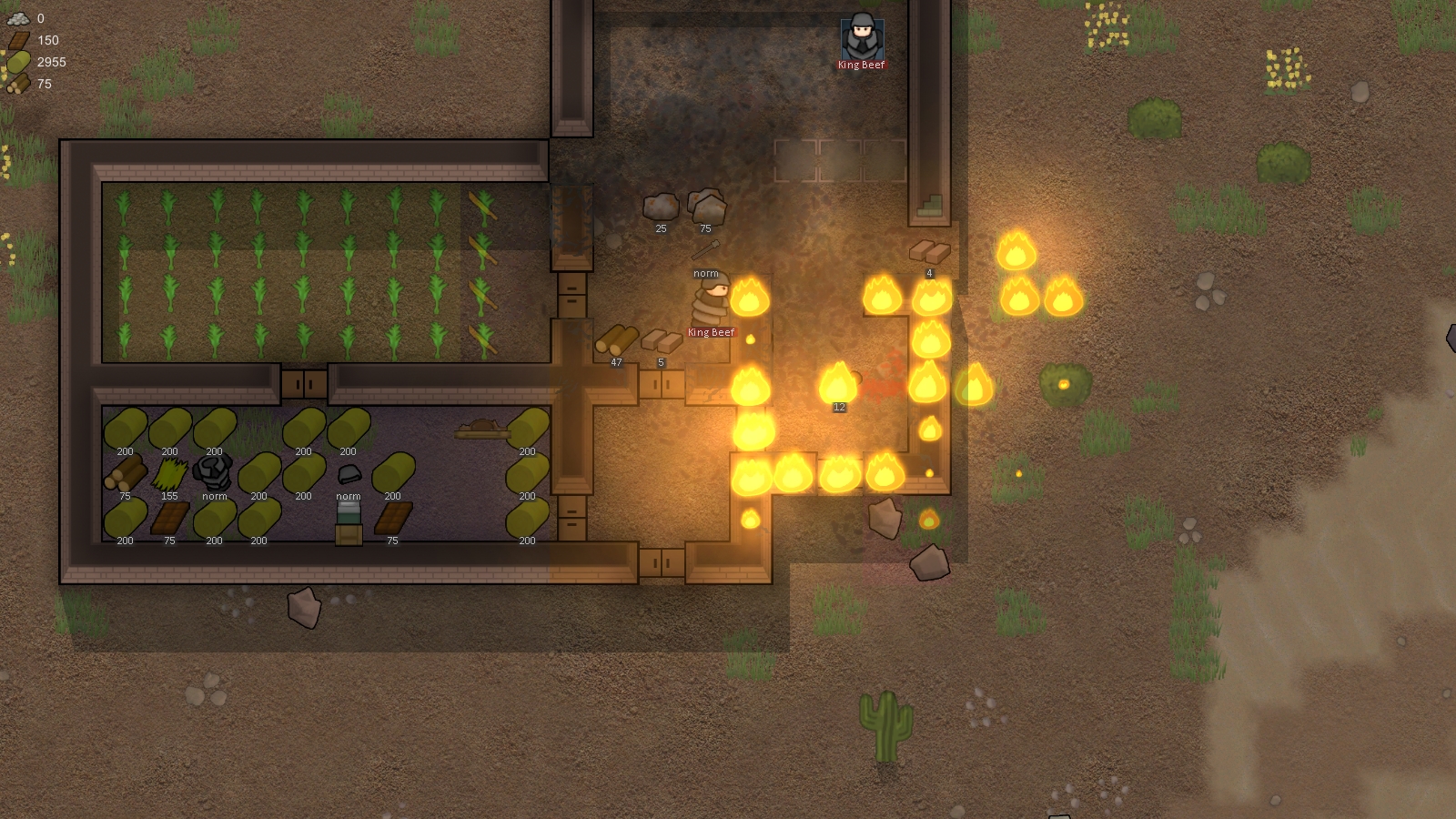 At the height of summer, a thunderstorm ravages the plain on which King Beef has built his home, and since it is the only freestanding object for miles around, it acts as a lightning rod. Just before dawn, the King is woken by flames sweeping through his crude living area, as the fire burns out the wooden core of his homestead. He sustains horrific burns while salvaging his spare set of regal armour from the inferno, but thanks to the Praetor's gift he is able to psychically ignore the pain, and so even though his hands are raw and blistered, he beats out the fire in his cornfield with his usual blank, steady gaze. 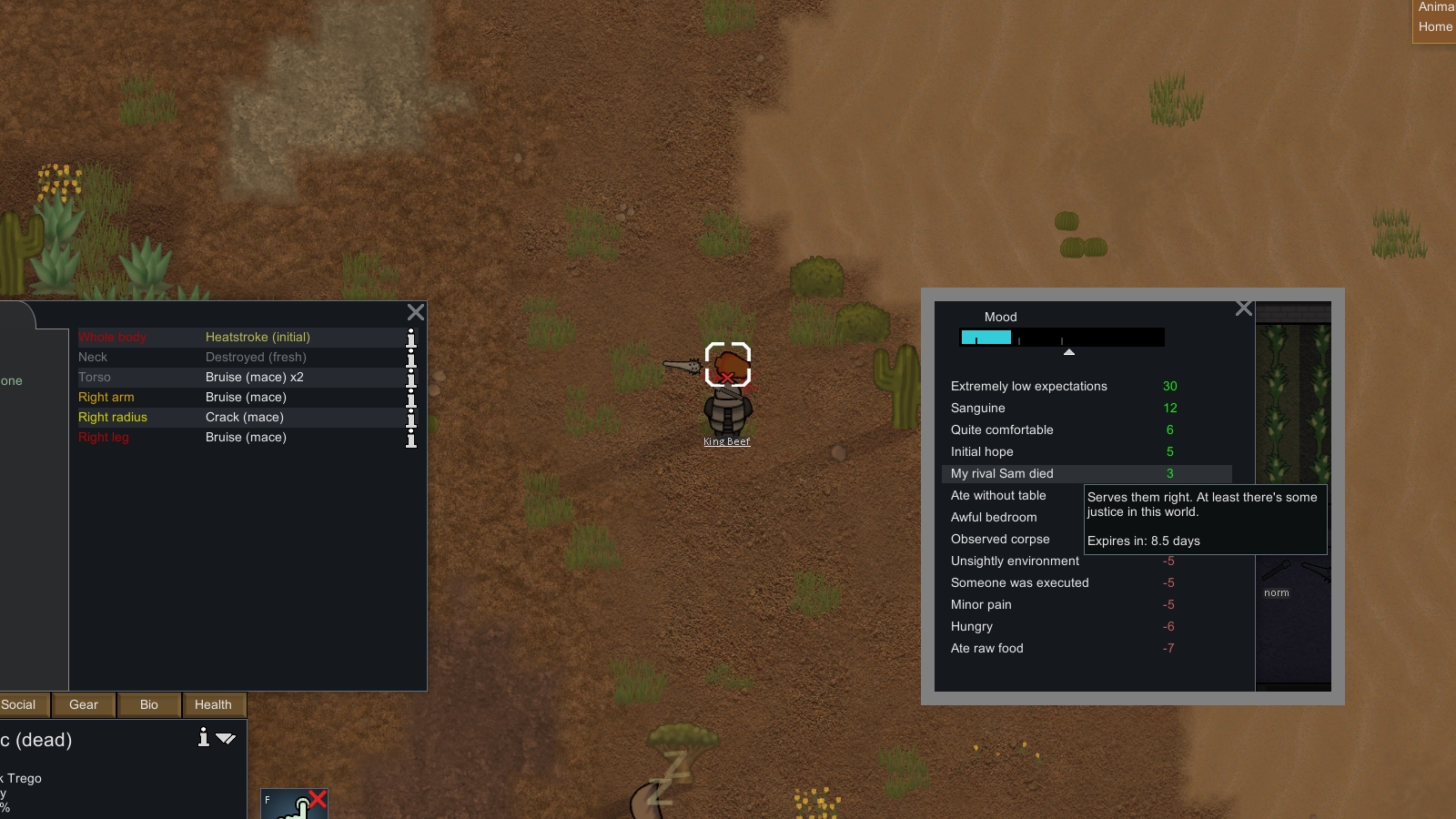 King Beef rebuilds his home in stone, and allows himself a larger, more comfortable living area. But as his castle grows, the locals begin to hear tales of the strange ranch being built in the scrubland, and grow covetous. Over the course of the next week, as a heatwave strikes, the King sees off incursions from three separate, club-wielding chancers. But their blows might as well be the flapping of a fledgling sparrow's wings against a fox's jaws, and Beef is pitiless in his retribution. One intruder has their neck flattened so comprehensively by his maul that their head vanishes altogether. But as the spray of cranial matter patters gently to the dry soil, the King feels only faint satisfaction - for the raider, it transpires, was their old rival Sam, and an old grudge has at last been settled. 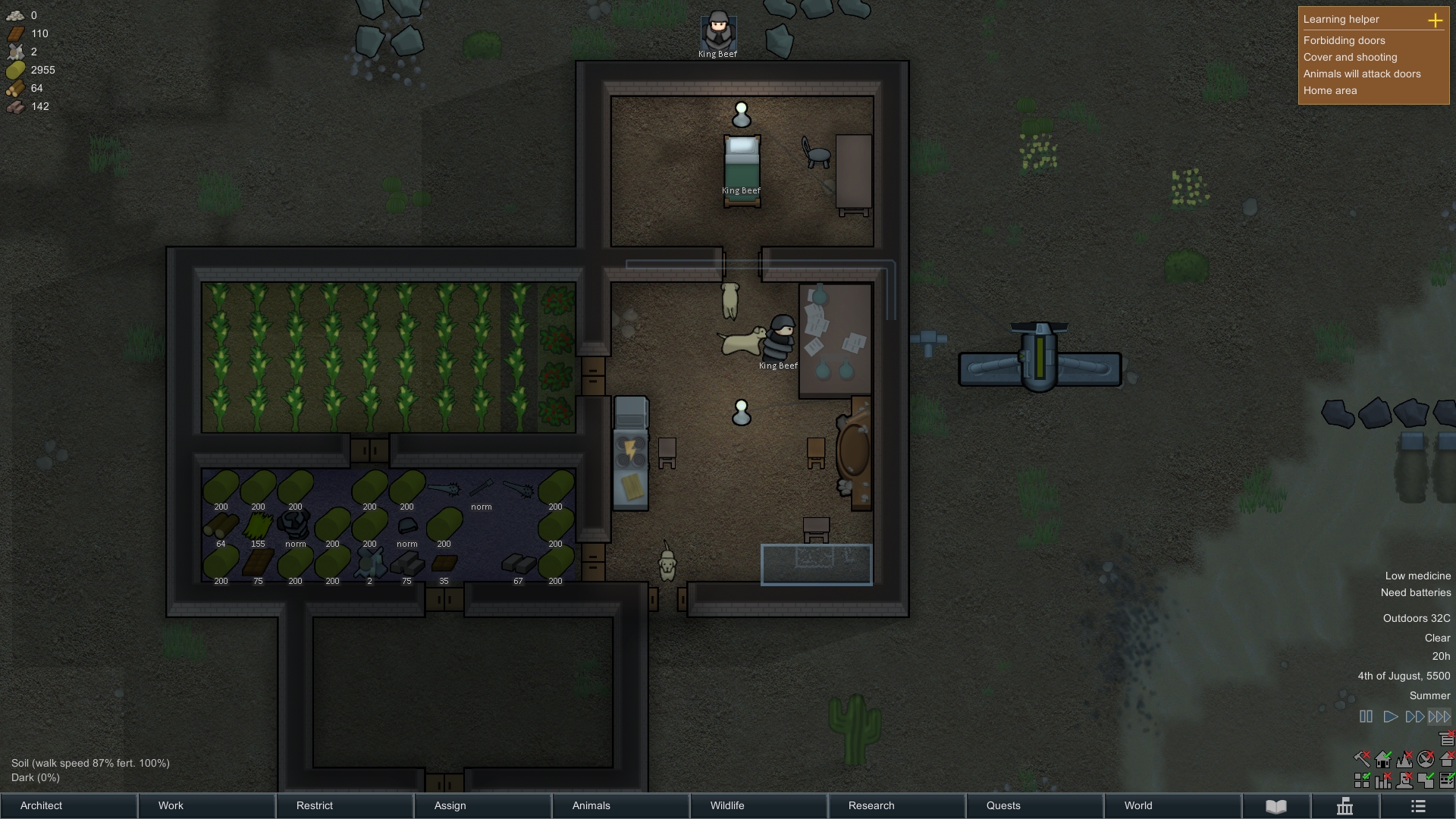 Growing uncomfortable in the heat, the King digs some compacted scrap out of a nearby hill - the compressed remnants of some former civilisation - and uses it to construct a wind turbine. He intends to use this to power a cooling unit, which will eventually provide the means for a beef freezer once his herd is up and running. But the King does not know how to make a battery to store power when the air grows still, and as he sits down at his "research desk" to puzzle it out, it occurs to him that he barely has any idea how to think. Three labradors wander out of the dark, and he accepts them as the Hounds of King Beef, but they have no secrets to teach him when it comes to electronics. 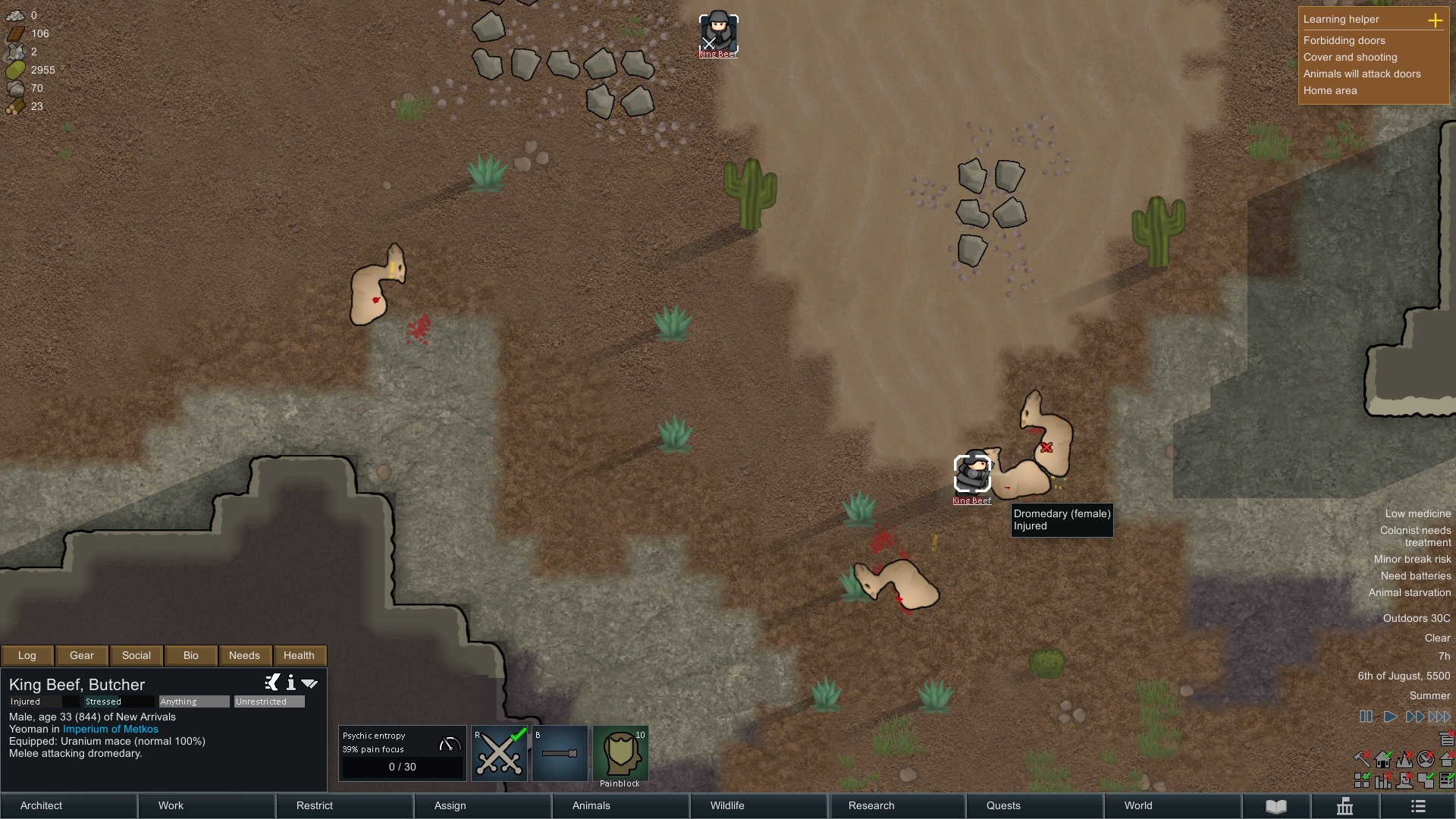 The dogs, as it happens, provide Beef with a welcome distraction from the prospect of having to invent the battery from scratch. Unlike his bovine subjects, they are not content to eat hay - or at least, not without it being blended with meat to make kibble. And so, with a light heart and heavy fists, the King staggers out into the desert and beats an entire herd of camels to death, before dragging their carcasses home one by one. Imagine this harrowing moment from Conan The Barbarian, but repeated again and again over the course of a long, relentless hour. 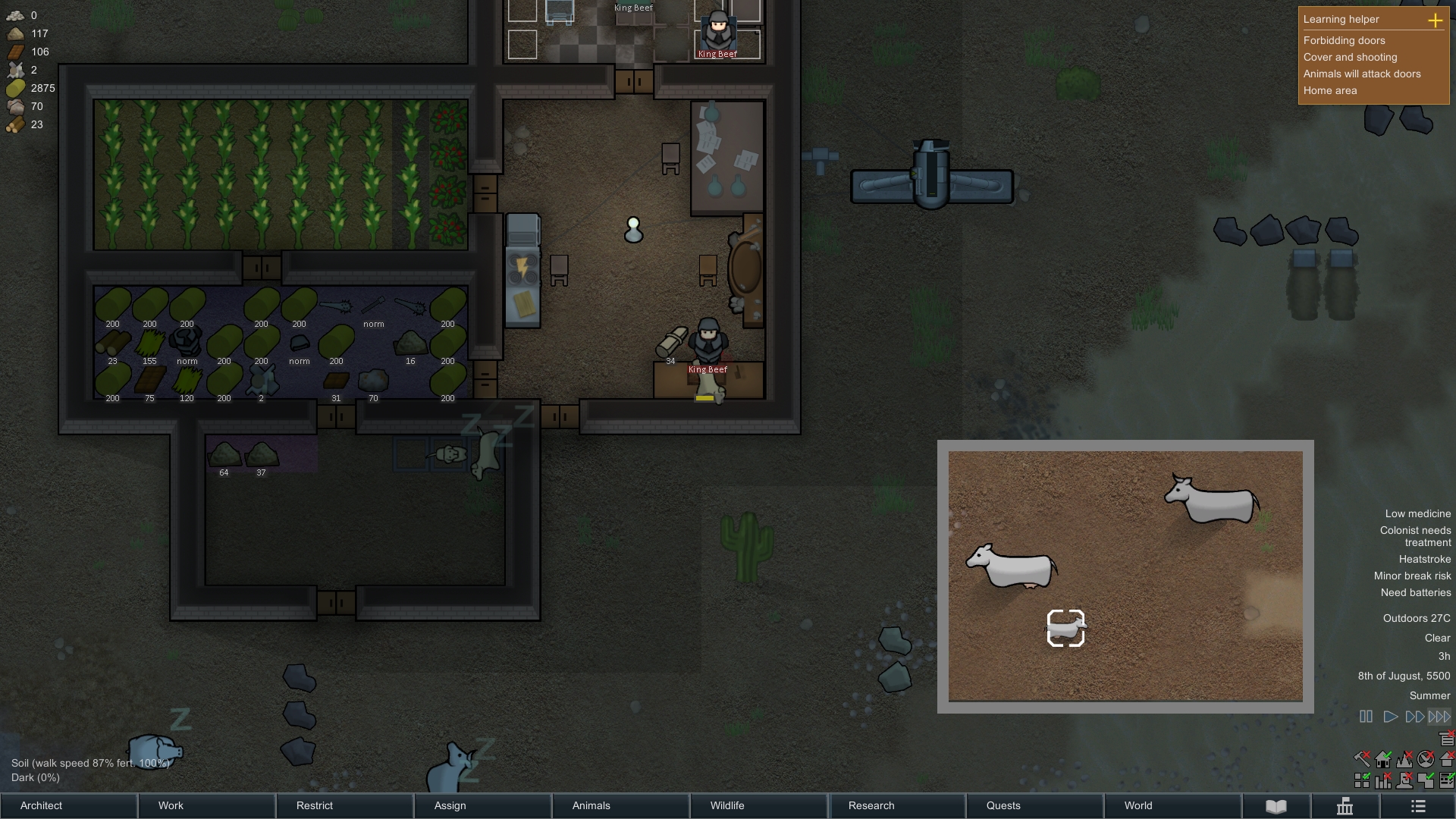 Alas, King Beef gets so into his work that, by the time the first batch of kibble is ready, one of his Hounds has starved. Feeling the nearest thing he can to genuine remorse, he waits until the dogs have fallen asleep in the barn that night, and by the next day at dawn, there is at least one more sack of kibble. That same day, the King's sole cow gives birth to a calf, in what he takes as a sure sign that God has forgiven him for the sin of dogburgers. 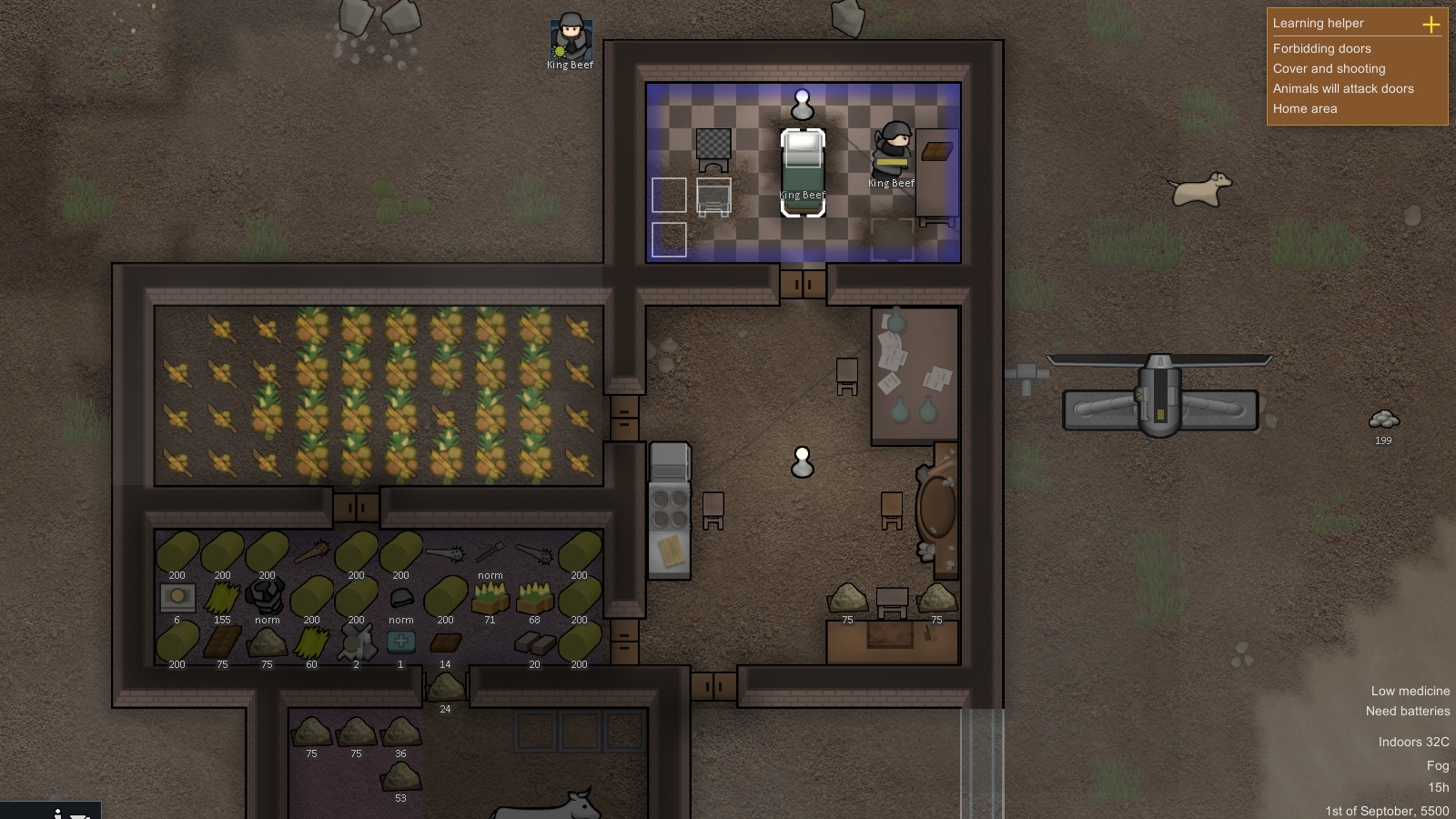 For a while, King Beef knows something like contentment. Although his crops are stricken by a blight, he has ample food now for both his Hounds and his herd, and he himself can enjoy a diet of pure chocolate. He even makes a chess set to teach himself to think, and paves his bedroom with ornate sandstone tiles to the extent where - quite accidentally, and for the first time in his wretched life - he has created something that could be described as beautiful. 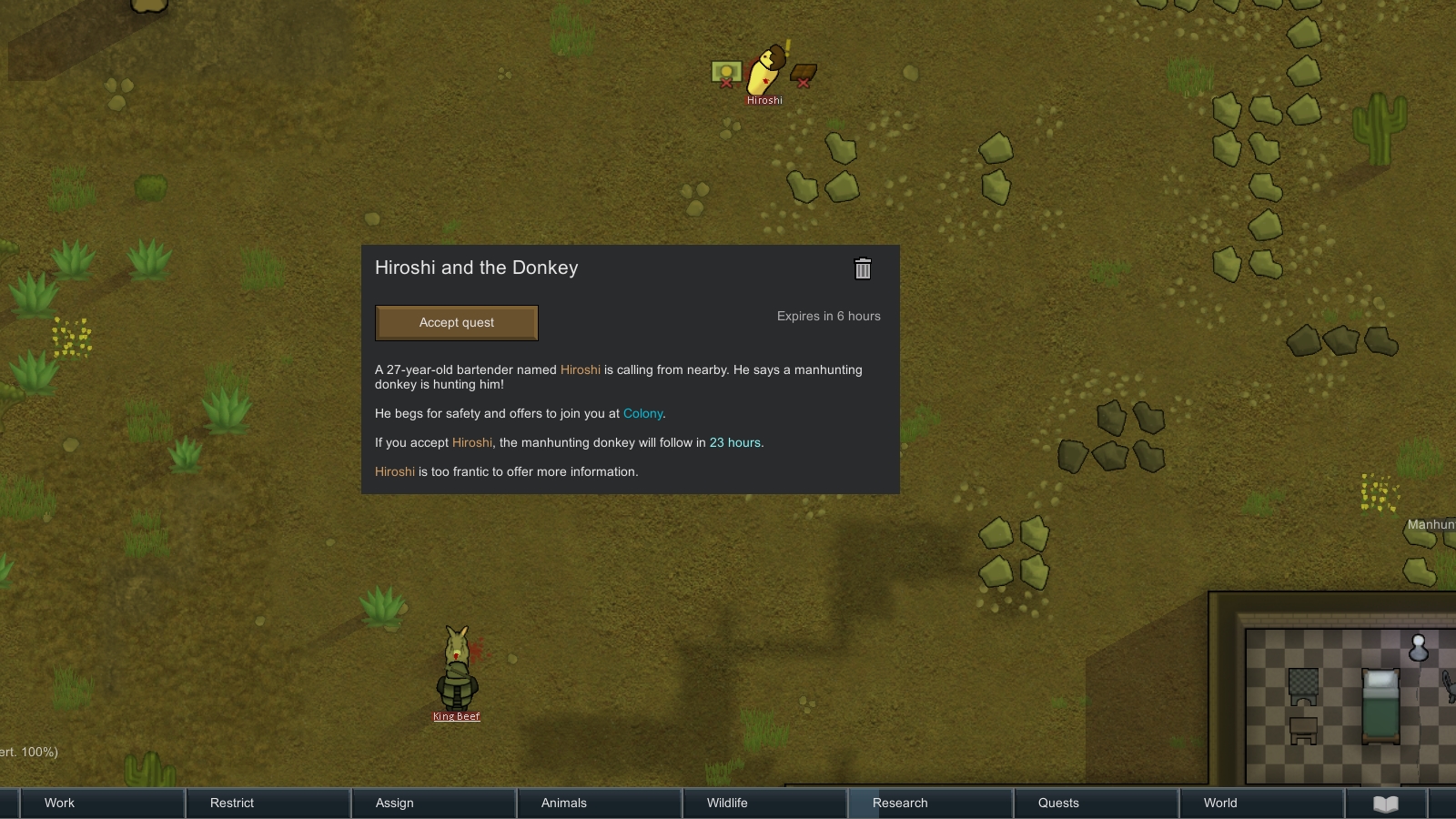 This prosperity cannot last. As a great cloud of toxic fallout settles over the scrubland, forcing Beef to pen up his beasts inside the barn, a sense of gloom settles with it. The air thickens to a perpetual, greenish-yellow twilight, and Beef is about to lock the homestead doors when the theme from 'Gladiators' pipes up from his Nokia. A naked bartender called Hiroshi is being chased through the chemical fog by a donkey, and begs to be delivered by the fists of King Beef. Usually, the King would balk at the idea of company, but he is making zero progress on the battery project - perhaps this new serf might do his thinking for him? He wades out into the caustic mist to do battle. 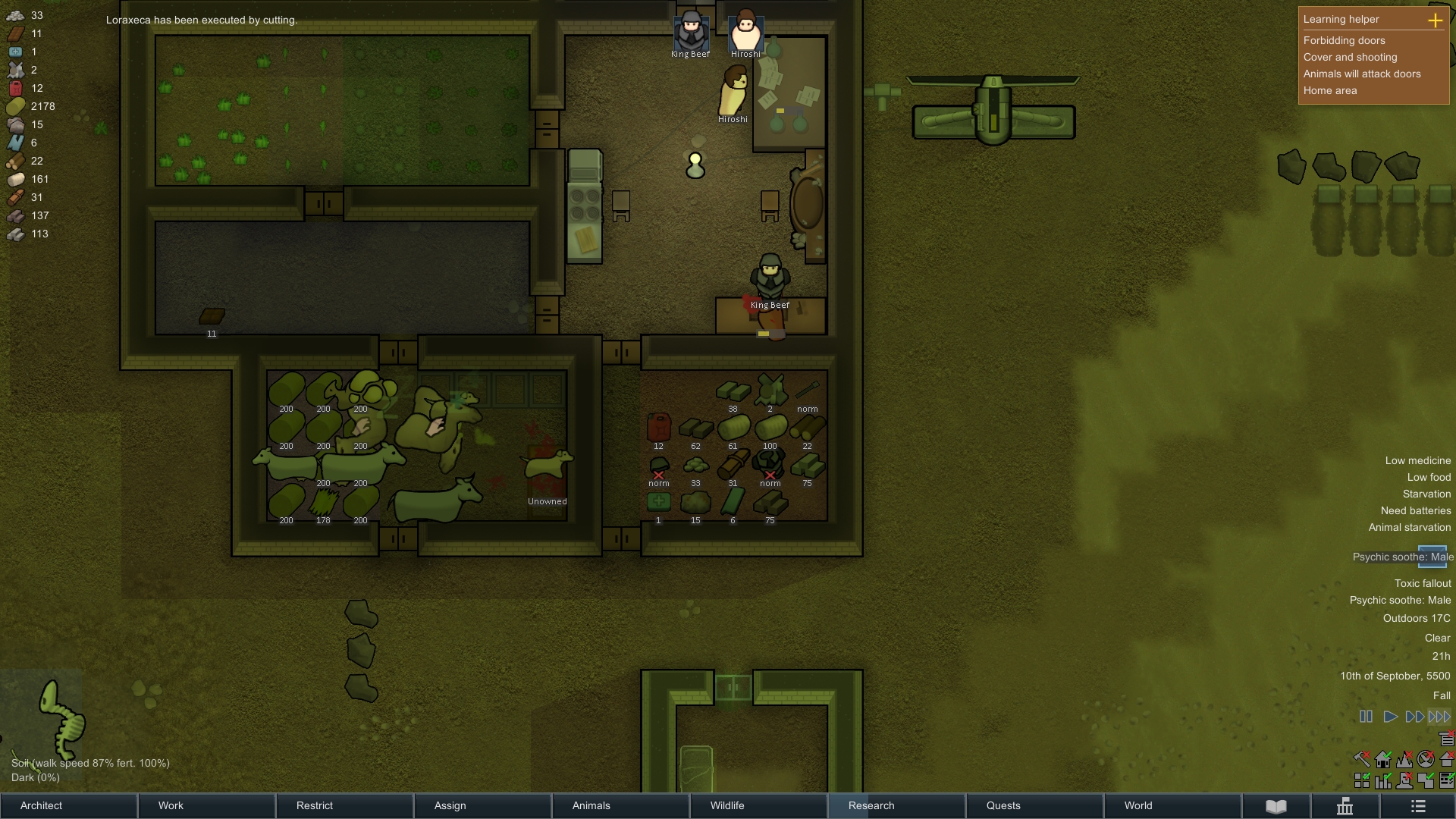 Hiroshi is an easygoing fellow. He is happy to sit and begin work on battery-inventing, in fact, the moment the King has gruffly patched up the donk-marks in his torso. He even rescues a pair of camels from the toxic gloaming, and tames them. But over the next few days cooped up with his titanic, heavy-breathing host as the fallout worsens outside, he begins to wish he had laid down and welcomed braying death at the hooves of his pursuer.

King Beef is simply unbearable to live with. Each day begins with Hiroshi being woken with a coarsely-delivered insult, while being lightly strangled. Each day ends with a game of chess, that the King does not take well to losing, and Hiroshi is pelted with pieces all the way to his sleeping bag in the hay store while being called "a big piss" by his liege lord. Eventually, the last straw comes when they run out of chocolate and camel milk, and King Beef growls that he is "going to get some meat". When he returns, he is dragging the day-old carcass of a human raider, and Hiroshi can take no more. Bellowing in frustration, he cracks, and starts hammering away at his captor's stupid spare armour with a wrench.

King Beef merely shakes his head in sorrow, and withdraws his mace. 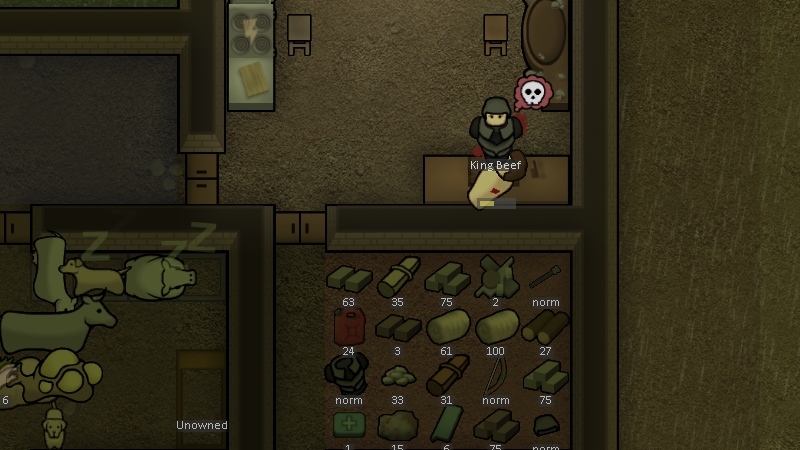 The Tragedy of King Beef will conclude on Wednesday.