You may have noticed I've written a fair few words about Nvidia's new RTX 2060 this week. It's a good graphics card and I like it a lot. If it had existed three years ago when I wanted to get Matthew a graphics card for Christmas that could play The Witcher III at 60fps at 1440p on max settings, I probably would have bought it instead of the GTX 1070 I ended up getting instead because it seemed like the best compromise at the time.

Of course, the only way to tell if a graphics card is any good is to play some games with it. Specifically, the same three-odd minutes of said games over and over and over again so you end up with a uniform set of data you can use to compare and contrast across a wide variety of cards, resolutions and graphics settings. And let me tell you, you start to notice some really odd things when you've played the same 90 seconds for the 1800th time in a row.

Batman is definitely in the crowd of Hitman's Paris level 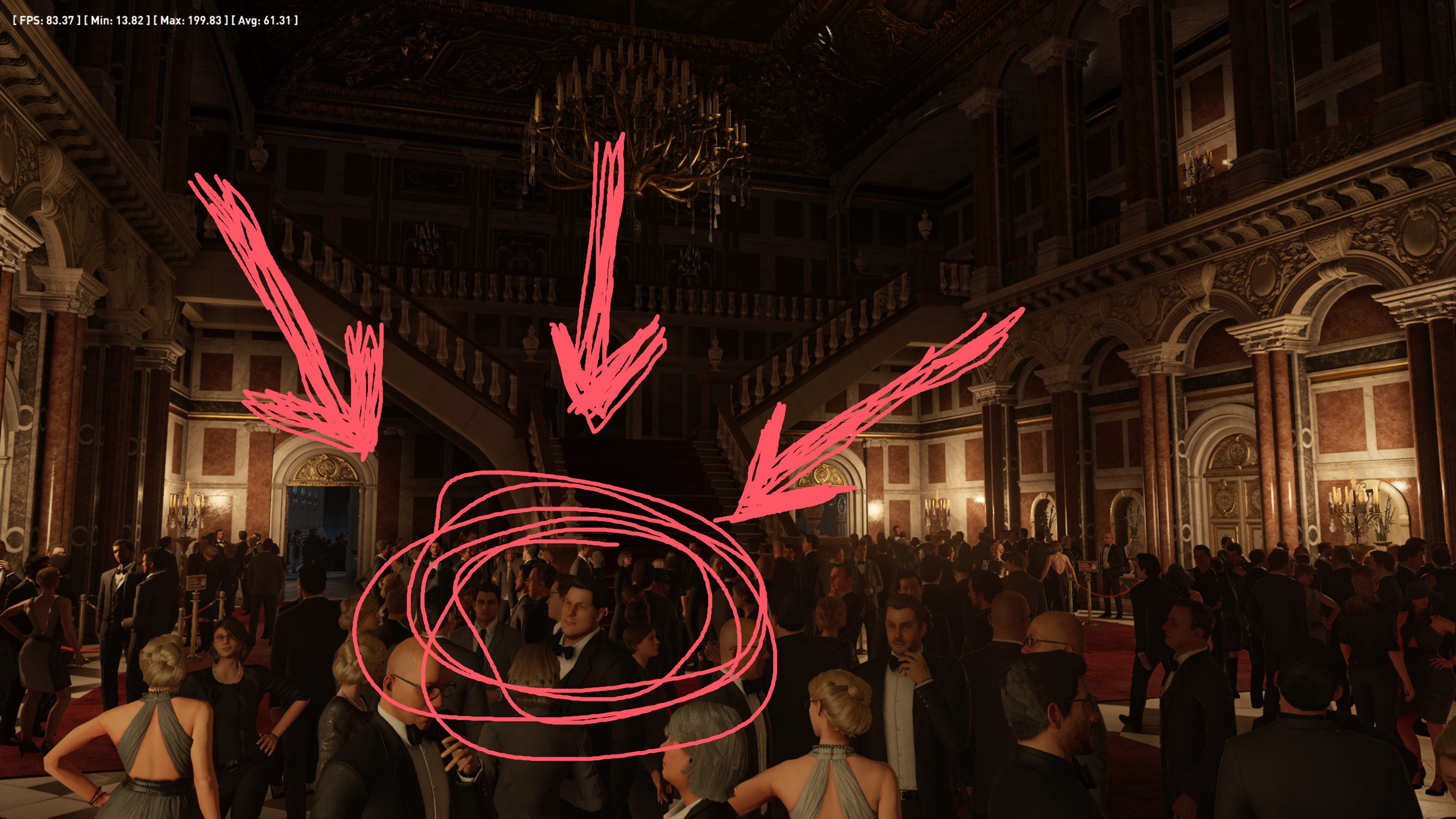 THIS GUY. Definitely Bruce Wayne, no doubt about it. Ironic, really, considering Hitman 2 ended up being published by Warner Bros. MAYBE IT WAS A PLOY ALL ALONG.

There are two tracks that play when you fire up Forza Horizon 4's benchmark tool, but Beck's Colours (embeded above) is definitely my favourite. I probably listened to it more times than any other music track last year (as I've explained in a previous supporter post, a lot of my time's spent listening to video game soundtracks so normal music doesn't get a look in very often). I have no idea what the lyrics are, though, because I'm too busy using its short, truncated beats to sing the game's minimum and maximum frame rates. Try it. I promise it works. Forty-five *dun dun* to sixty-three, forty-fiveeeeee too-oooo siiiiiiix-ty three. It works, right? RIGHT!?

Assassin's Creed Odyssey can be very rude for no reason

I mean, sure, the main game is full of smooching and bonking everywhere you look, but it seems the benchmarking tool thinks the swooping camera is, in fact, Kassandra or Alexios as they pass through the opening temple. The attending guard isn't best pleased about this, and will often shout wildly at the wind telling nothing in particular that it should really think about getting lost OR ELSE. Occasionally, though, he drops an abrupt F-bomb almost as soon as the benchmark gets going, which took me by surprise the first time it happened, and I've sort of resented him ever since.

I'd go and tell him to do the same in-game if I actually knew where he was, but despite having stabbed my way through almost 90 hours of this damn thing, I still don't have a clue which city it is that Ubisoft used for their benchmarking tool, because they all look EXACTLY THE SAME. Curse you, sweary guard man. You live to see another day. 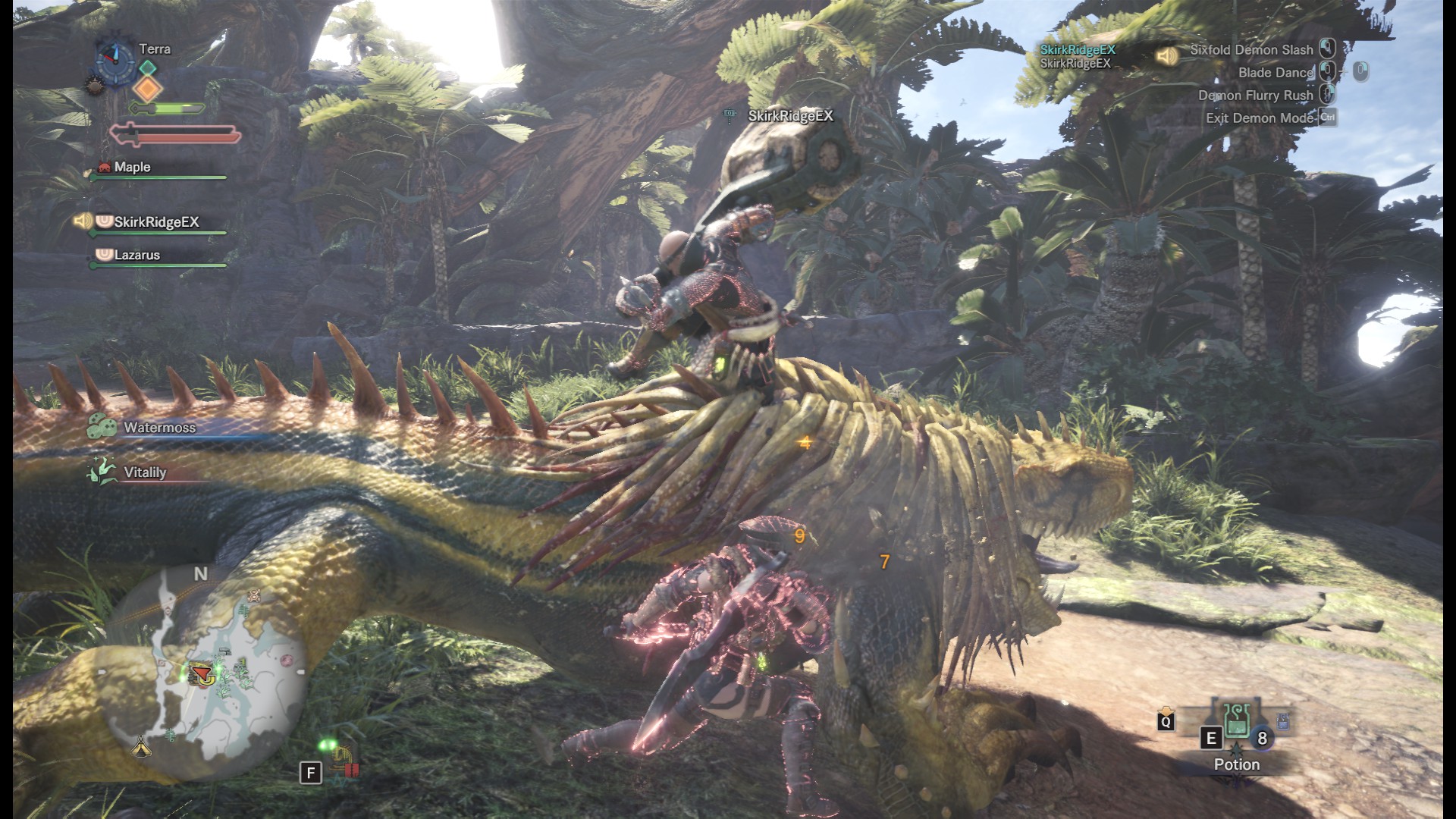 Dinosaur fashion sim Monster Hunter: World doesn't have a benchmarking tool of its own that I can use to test performance, but after getting side-tracked numerous times trying to find big enough monsters for my big Monster Hunter: World graphics performance guide, I've now honed my MonHan routine into an incredibly well-oiled machine, particularly if the Great Jagras is in town.

You see, I no longer have to go looking for the Great Jagras to see if the frame rate tanks the moment a giant dino appears onscreen, because I know exactly where it will be and how long it takes to get there. In the time it takes me to do a lap of Areas 1, 3, 4, 11 and 2, the Great Jagras will have risen from his slumber and gone to chow down on some poor, unsuspecting Aptonoths back in Area 1. Bish, bash, bosh, I've recorded min and max frame rates for a big chunk of the surrounding area and got a nice easy monster fight under my belt as well. Job done. Now I just need to work out what to do with 9754 Great Jagras armour sets I have sitting in my inventory wardrobe. 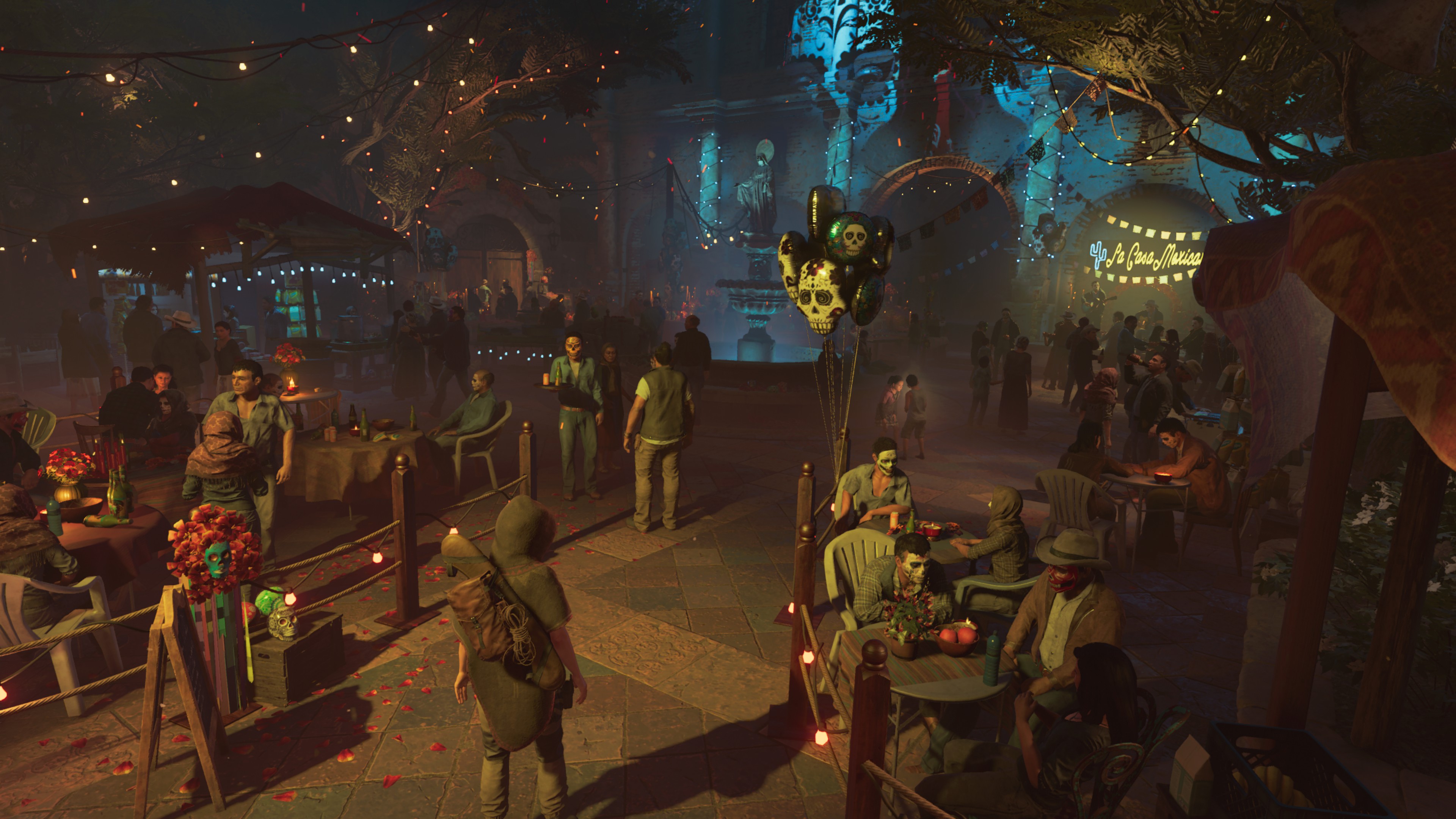 Most people will probably spend all of 15 seconds making their way through Cozumel's town square right at the beginning of Shadow of the Tomb Raider, but if you stick around and walk back and forth and back and forth around the fountain like I've done for the entire eight hours and counting of my total play time, you'll find that Lara and her best friend that definitely doesn't have a death wish Jonah have a surprisingly touching and wide-ranging set of exchanges.

They talk about everything from whether Lara's heard from her other best friend Sam lately to how the smell of food from the nearby stalls is making her feel a bit peckish after nearly dying in yet another cave in. Jonah asks about how Lara's injured leg is doing, whether she'd like him to buy any Jaffa cakes(!) for her (d'awww) if he saw anyone selling them, and even jokes about Lara preferring the company of the Stormguards and Deathless from their previous adventures when she remarks about how she isn't really 'used to crowds'. I particularly love the bit where he asks Lara what she was smiling about when they walked past a florist. Turns out the chap had dahlias for sale, which were the favourite flower of Lara's mother.

They're small touches, but they add character and depth to these silly polygon people, and whereas I looked at Jonah before and saw nothing but an idiot who didn't know how to say no to clearly bad holiday offers, I now see a proper human being who cares deeply about this mad woman and is concerned for her well-being. He's a sweetheart, really, and the amount of care and detail Eidos Montreal have put into this scene make it a very pleasant place indeed to have spent eight goddamn hours in.

Doom's Super Shotgun is just the best, but the finishers are even better 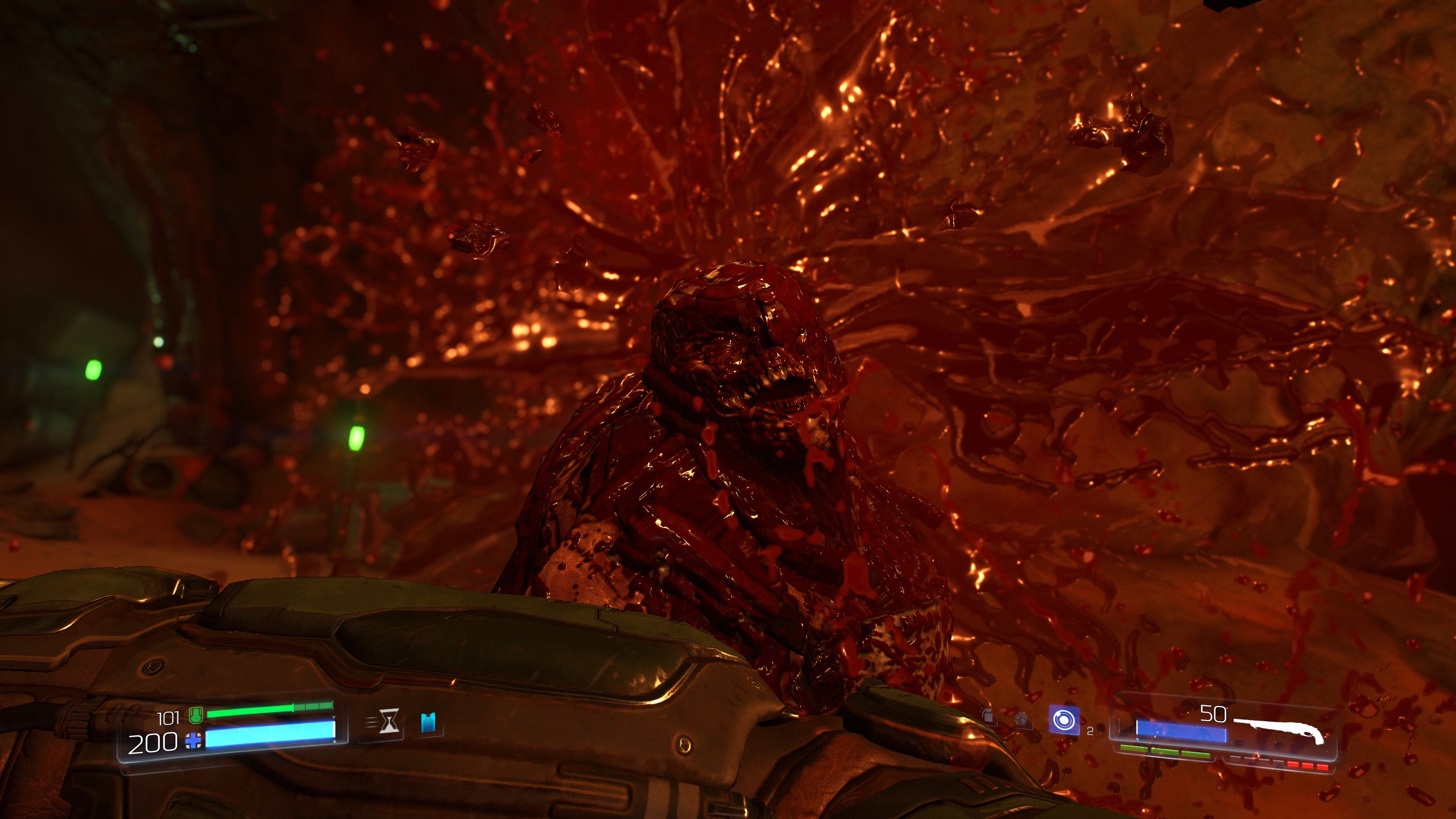 The Super Shotgun remains the finest video game gun known to man, but good gravy are Doom Guy's fists powerful. Phwoar. Just look at all that lovely gore and demon viscera. Man, that never gets old.