When I wrote about Assassin’s Creed Odyssey on Monday it was mostly centered around the awesome power of Kassandra’s kick. It was a little bit undisguised thirst for Kassandra. I asked Graham if my review of Assassin’s Creed Odyssey could just be Kassandra fan fiction and he said he would love to publish fan fiction on RPS, which isn’t a no but isn’t a yes either. Both Kassandra and Alexios have a bit of something going on. A presence. A swagger. A way with both the ladies and the men.

This is, of course, the first Assassin’s Creed where you can get biz-ay. It’s not a delicate dance of making the right in-game decisions and giving someone enough presents that their I Like You meter is full enough for a relationship. But you can choose to flirt with people, and choose how brazen that flirting is, and sometimes that results in a discreet fade to black. The text of these relationships is uncomplicated, leading to hilarious and messy subtext. This is especially the case with Odessa, my first love in the game. (This article has spoilers for a couple of side quests in Odyssey, btw).

Odessa wasn’t my first successful romance in Odyssey. That was a really horny old lady kicking around Delphi. She asked me to gather the ingredients for an aphrodisiac for her husband, who was having trouble keeping up with her (despite her “dozens of lovers”). When I returned with the bear testicles and deer tongues he was, for some reason, unwilling to drink it. This lead to the Carry On-esque situation of him sitting outside his house for a day, whilst I spent 12 in-game hours, minimum, going at it with his wife. Afterwards he was like “You’ve more than earned your drachmae!” and I was like “Wow, you have a very liberal relationship, congratulations.” That couple is together to this day, I imagine. Paying mercenaries to shag the nice lady, while her husband sits outside playing the lute and entertaining friends. They’re probably very happy.

The easy confidence with which Kassandra flirts is something to behold. Once you’ve pointed her in that direction, she is an irresistible freight train of sexiness. You can choose to be more subtle, and say you’d like to read epic poetry with them or something weird like that. There’s usually a middle ground option as well. But Kassandra, who is, as far as I can tell, socially fearless, will also just go fully for it, with reckless abandon. She will throw herself into the flirt. Thus there is always an option to say something like “So I assume you have a bed back there somewhere?”. She doesn’t follow up with “D’you want to go and shag mad on it, like?” but I feel that it’s heavily implied. Kassandra isn’t a savage, though: if someone isn’t into it, she isn’t into it. If the object of desire isn’t up for being desired, she’ll drop it and be as cheerful as ever when they ask her to go and deliver a ceremonial olive branch to their recently wedded uncle, or whatever the original point of the conversation was before Kassandra tried to derail it. 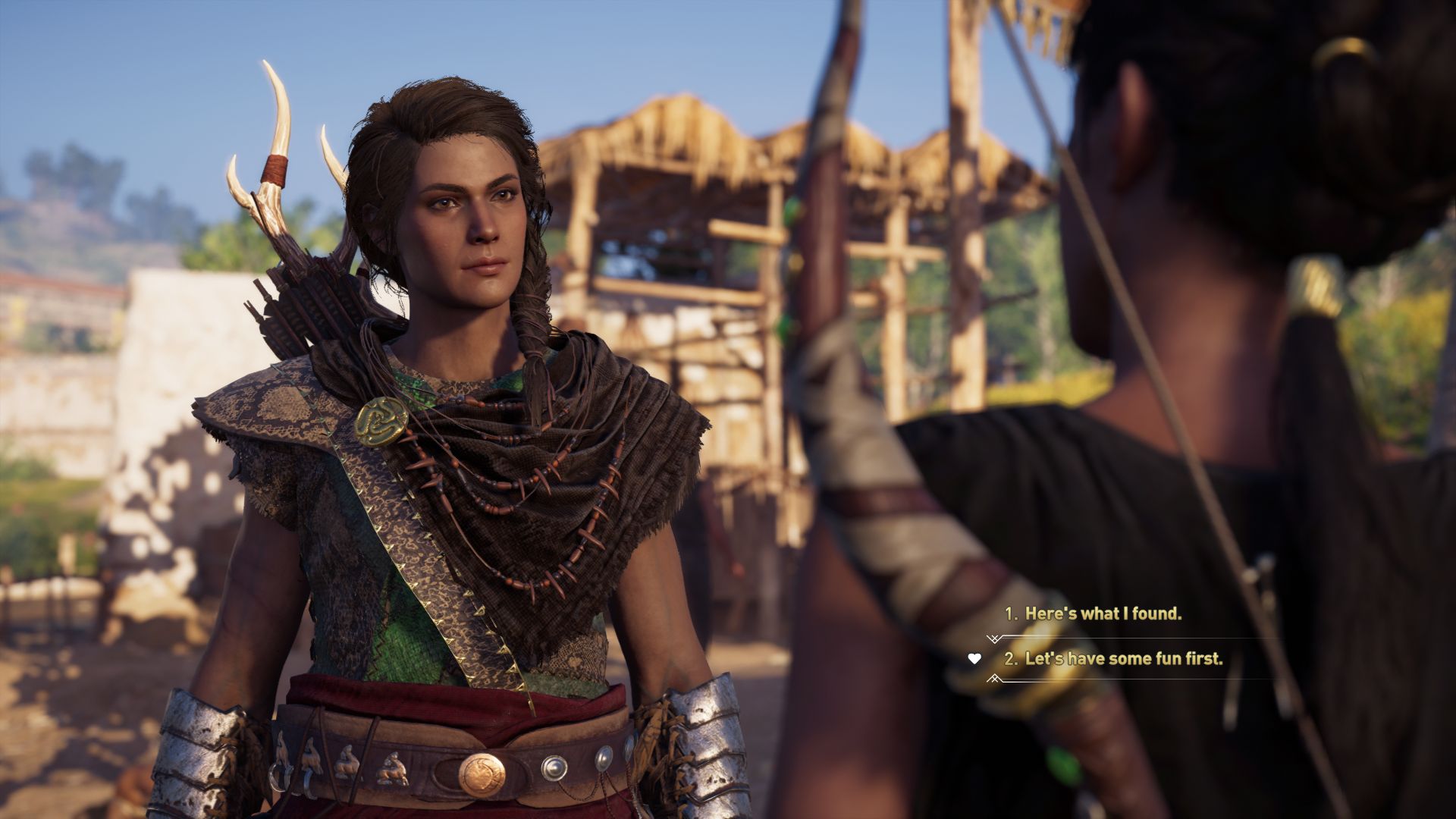 Odessa both is and isn’t up for it; she well fancies Kassandra (because we all do) but sadly her chores take precedent. This then becomes a vehicle to get Kassandra to do said chores, and it is very funny. You can meet Odessa on the island of Ithaka, next to the starting island. She’s been captured by soldiers whilst poking around Odysseus’s palace (which you are then poking around as part of a main quest line). Odessa is apparently descended from the legendary king, and is named after Odysseus -- as is the game, incidentally! The original Odyssey is an epic poem about Odysseus being so bad at getting home that it takes him 10 actual years, which is pretty bad considering most people can manage it in an evening after a bottle of wine, even if they fall asleep on the tube. This is why “odyssey” now means “a long and meandering journey.”

This also applies to getting in Odessa’s pants. When you first meet her, you can start laying it on factor 30 thick, but she (reasonably) just wants to go home. When you meet her again you’re all “How could I forget that face” at her, and she says there’s nothing she’d love more than to go and have it off except there’s that thing she has to do… This process is repeated a few times. Things Kassandra respects the pussy enough to do (it is allowed for me to write that because I am a girl): murdering some mercenaries; totally believing there is a conspiracy against Odessa; sneaking into a heavily guarded house and stealing a bunch of evidence that Odessa has actually been up to some shady shit; the shopping.

Eventually Kassandra and Odessa did get it on (Kassandra picked Odessa up and it was great, she is very forceful, I love you Kassandra). Because Kassandra is an irrepressible horndog, you can then ask to have sex again, almost immediately. And then I asked Odessa to join my ship’s crew because in real life that is a terrible, terrible idea. You should never have a fling with someone and then offer them a job. That is not Sparta; that is definitely madness. But in this video game you are a giant weightlifting pansexual girl pirate, and now your ex is your lieutenant, and she boards ships and stabs people to death by your side.