I haven’t had a lot of time to play Assassin’s Creed Odyssey (a weekend and a bit) and it is also a very big game. Soon I will be able to give you an appropriately epic review, with a Chorus and mistaken identity and children murdering their parents. All that great Ancient Greek stuff.

However, there are already some initial impressions that I think it’s important to share with the world. These impressions are mostly about the kicking.

First of all, though, we should be honest about something: so far, and unless something massive changes, this isn’t the second coming of Hercules in RPG. I love Assassin’s Creed, and stuck with it through weird cockney and posh French Aristocrat times. I was of course thrilled with and by Assassin’s Creed Origins because it was new, and not largely the same game spaffed out every year but in a different European capital city. Odyssey feels very much like a cool Greek reskin of Origins, not a brand new RPG take. The map is very big, your best mate is an eagle, you’ve got loads of cool gear to choose from, and so on and so forth. There are additions and changes (for example, mercenaries actually feel like a threat now, and you can flirt with nice ladies sometimes) and the interweaving of ancient myths is very cool. This is a good game, and you can shag people in it, but the love child of The Witcher 3 and all your favourite BioWare games it ain’t, and you’d be wrong to go in expecting that. 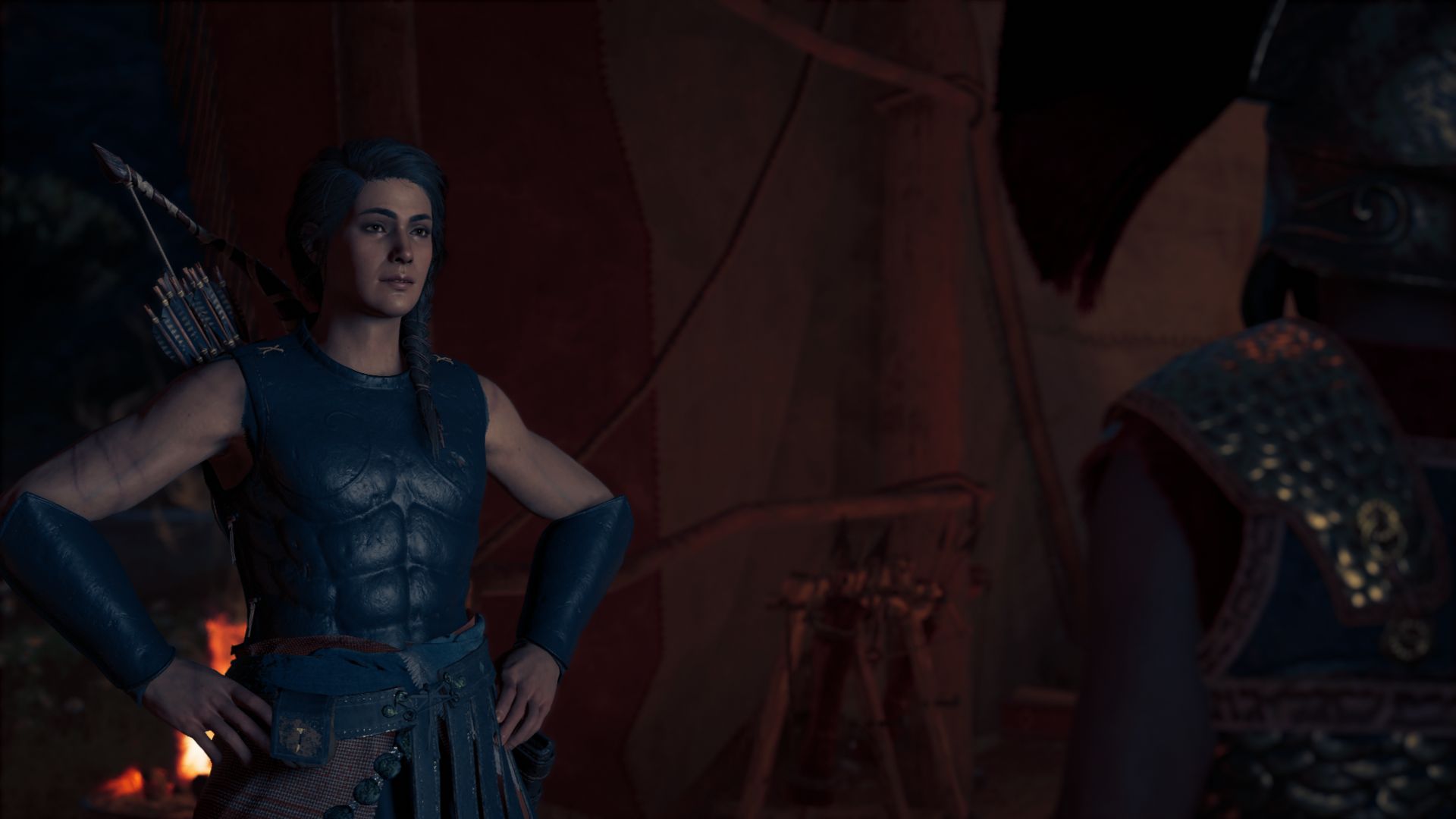 Secondly, we must also discuss Kassandra. Kassandra is the best thing to have ever happened to me, and I love her. She’s got a hairstyle like a smart-casual Loreal model, and though you can pick dialogue options to be nice or nasty, whatever you choose Kassandra’s attitude is to take no shit. This AC is decidedly more brutal than the last, because you have the broken end of a spear instead of a nice neat hidden blade, which means Kassandra assassinates people by impaling their motherfucking throats through-and-through. She has, as the kids say, no chill. Her hands are the size of dinner plates. Kassandra could smush me into paste like cheap baklava.

This brings us to the main thrust of my early impressions, because Kassandra also has a kick on her like a deadlifting kangaroo. You’ll have seen the kick in some of the early promo material because Ubi surmised, correctly, that if you’re playing a Spartan in a game set in ancient Greece, the public consciousness will demand that said Spartan can do that cool Leonidas-in-300 move. You have to unlock it as a special ability and you must absolutely make it the first thing you do when you level up. 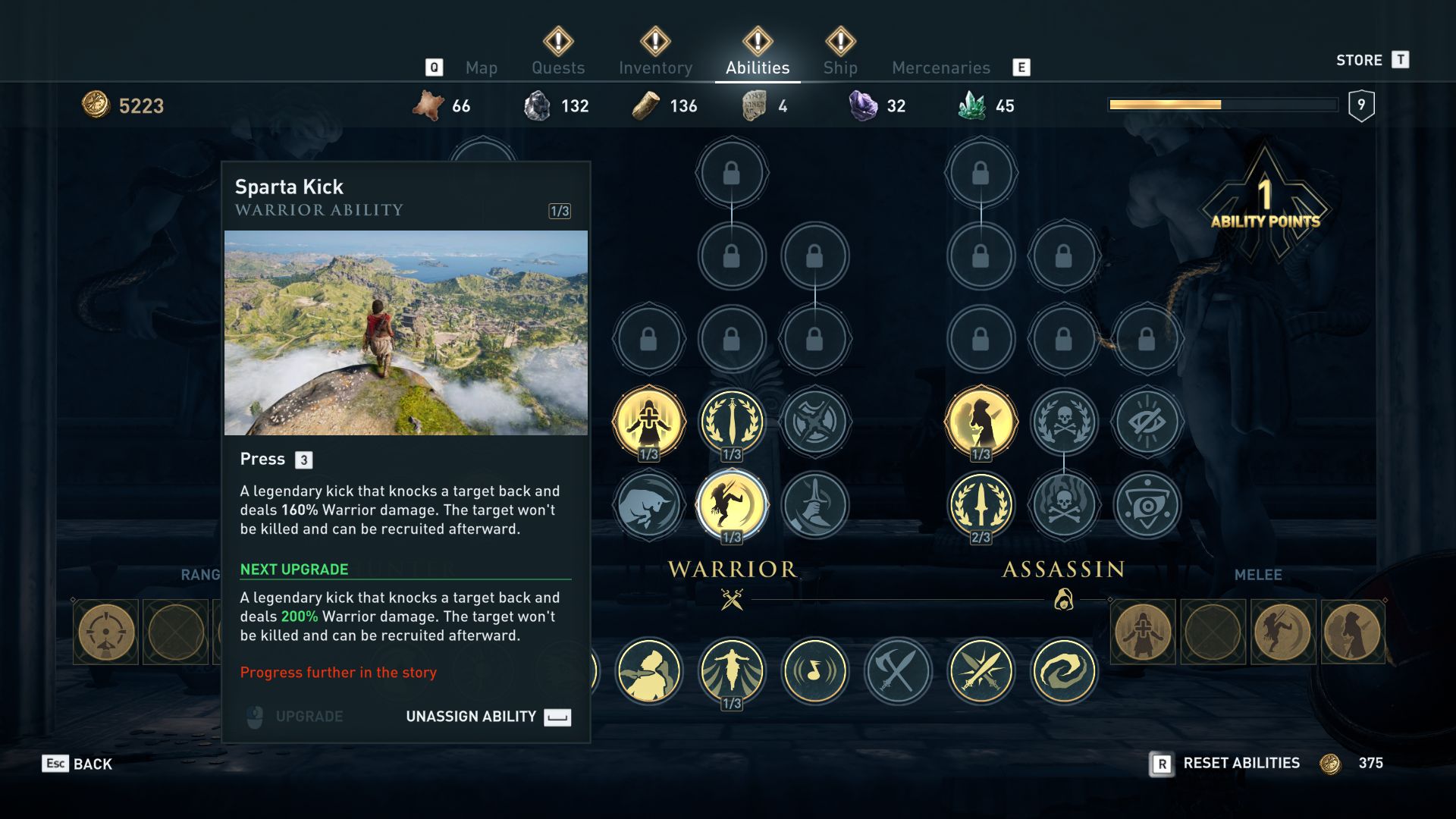 When you kick someone in AC Odyssey you launch them about 10 feet in the direction you kicked. “Someone” here also includes most animals, by the way. Kick wolves to death. Punt a ram. Anyway, you will soon learn that there is almost no problem that can’t be solved with a suitable application of foot. Especially if you’re near a cliff. Because if you kick someone off a cliff, or a tall enough set of stairs, that person will die when they hit the bottom. And killing someone refills your special attack gauge, aka Kick Juice, leading to theoretically infinite kicks! I have now used this technique as a shortcut in many situations. You can take out mercenaries three levels higher than you are by positioning them close enough to the top of a wall. They will go absolutely flying. Boarding a boat? No problem! Kick those idiots into oblivion and/or sharks mouths.

It is a balletic move. There is an animation team somewhere that absolutely deserves a raise. Kassandra plants her left foot, collects herself, draws her right knee what seems like entirely up to her chest, and then unleashes a kick like the fury of titans. And she will cover any distance to kick an enemy once the decision to kick has been made. She will leap into a kick. Zeno of Elea’s new paradox: by the time you try to run away from Kassandra kicking you, you will have already been kicked. Time doesn’t slow down when you Sparta Kick someone, it just feels like it does. And the kick can be improved! This isn't even the kick's final form!

Also there’s a big statue of Zeus with his willy out in the starting area, I guess?