If you click on a link and make a purchase we may receive a small commission. Read our editorial policy.
Developer: MuHa Games
Publisher: MuHa Games

God does not play dice with the universe, I once read on a Mini Milk stick, but Thea 2’s pantheon of Slavic-inspired deities seem well up for a game of cards. You don’t play as a mortal in this hybrid strategy role-playing game, but an all-powerful entity guiding the life of a hapless schmo in their quest from wanderer to chosen hero of a blossoming settlement. Thus began the chronicle of Cabbage Joe.

Some say that on the night he was born, the wrinkled green full moon somewhat resembled a giant luminescent cabbage. Some say that he had some cabbages in his portrait and I’d already been thinking up character names for hours. Whatever the truth, he was the Bok Choy-sen one, Savoy-er of mankind. Like all heroes of renown, Cabbage Joe had an unbreakable bond with a magical spirit animal: a pet crow that increased his perception skill. A useful trait for, among other things, gathering vegetables. And so it was that Cabbage Joe and his Cabbage crow set off for adventure. 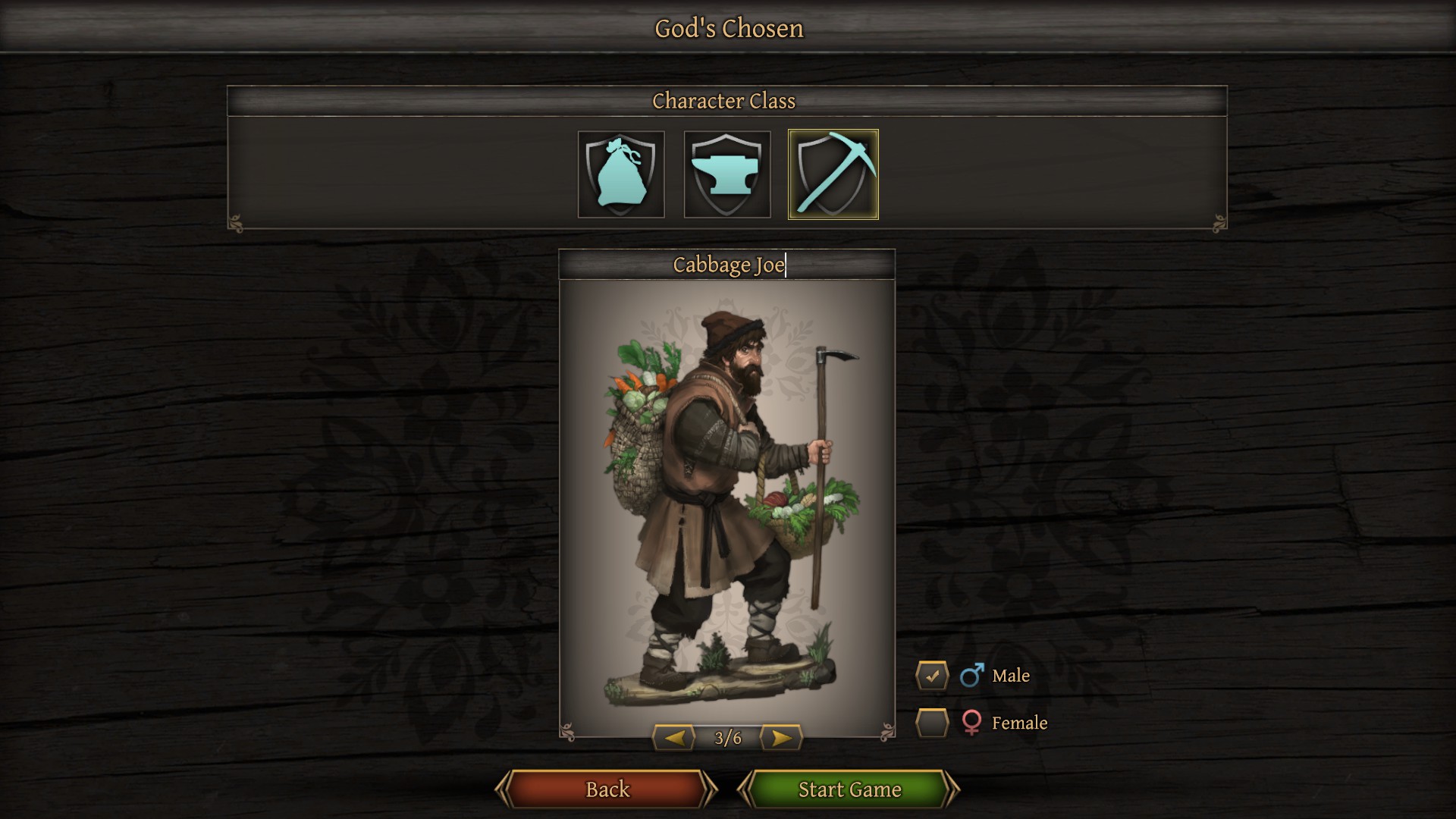 He's part of a group who'll be walking around a hexagonal map and getting into card-based fights, while other characters take care of a home settlement. The opening menu allows you a bit of freedom over your starting party, and since Joe is more acquainted with vegetables than the ways of war, I thought it best to stick a warrior in the party to handle the swinging of sharp implements. An additional craftsman rounded out my starting trio. There’s a few more specialised classes you’ll encounter later, but these three roughly correspond to what you’ll spend most of your time doing. Picking up things, crafting things, and hitting things that try to stop you doing the first two in peace.

Aside from the combat, this is all achieved through initially daunting but reasonably intuitive menus. Characters aren’t restricted to certain activities, but those with higher statistics or specialisations tend to get the job done a lot quicker. A warrior might take three turns to catch a fish, for example, while a dedicated gatherer equipped with the gathering tool you just made from some wolf bones might only take one. 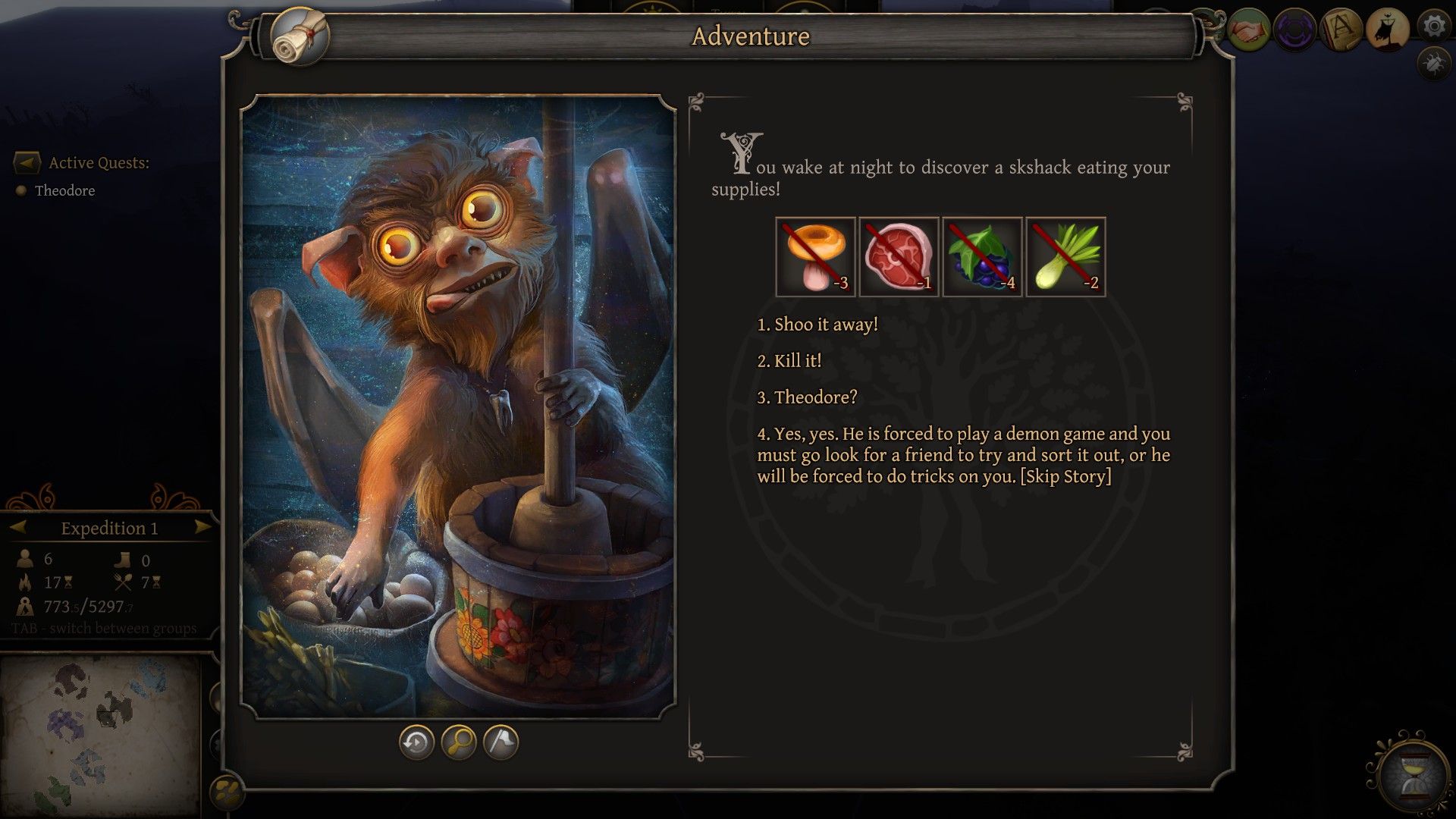 This is all done in service of surviving long enough to experience as many of Thea 2’s extremely entertaining random encounters as possible. Brendan mentioned a deluge of connect-the-dots fantasy faff in his Thea: The Awakening chronicles. There’s still a whiff of that stuff here, but it’s made palatable by a good helping of Witcher-esque self-awareness and fairytale subversion.

The world is separated into islands. You’ll eventually need to craft a boat to visit later (more difficult) islands, but initially, you’ll be travelling on foot, via movement points, across a hexagonal grid. Both resources and story encounters are marked on the corresponding hexes, though many encounters are random. Also marked on the map are settlements, which can be either be hostile, neutral, or friendly, depending on your past actions. After you’ve used up all your movement points, you can break camp for the night, which accelerates healing, and allows you to gather resources. Once you’re all out of movement points and have set everyone to the gathering of shiny rocks, you hit ‘end turn’, and start again. 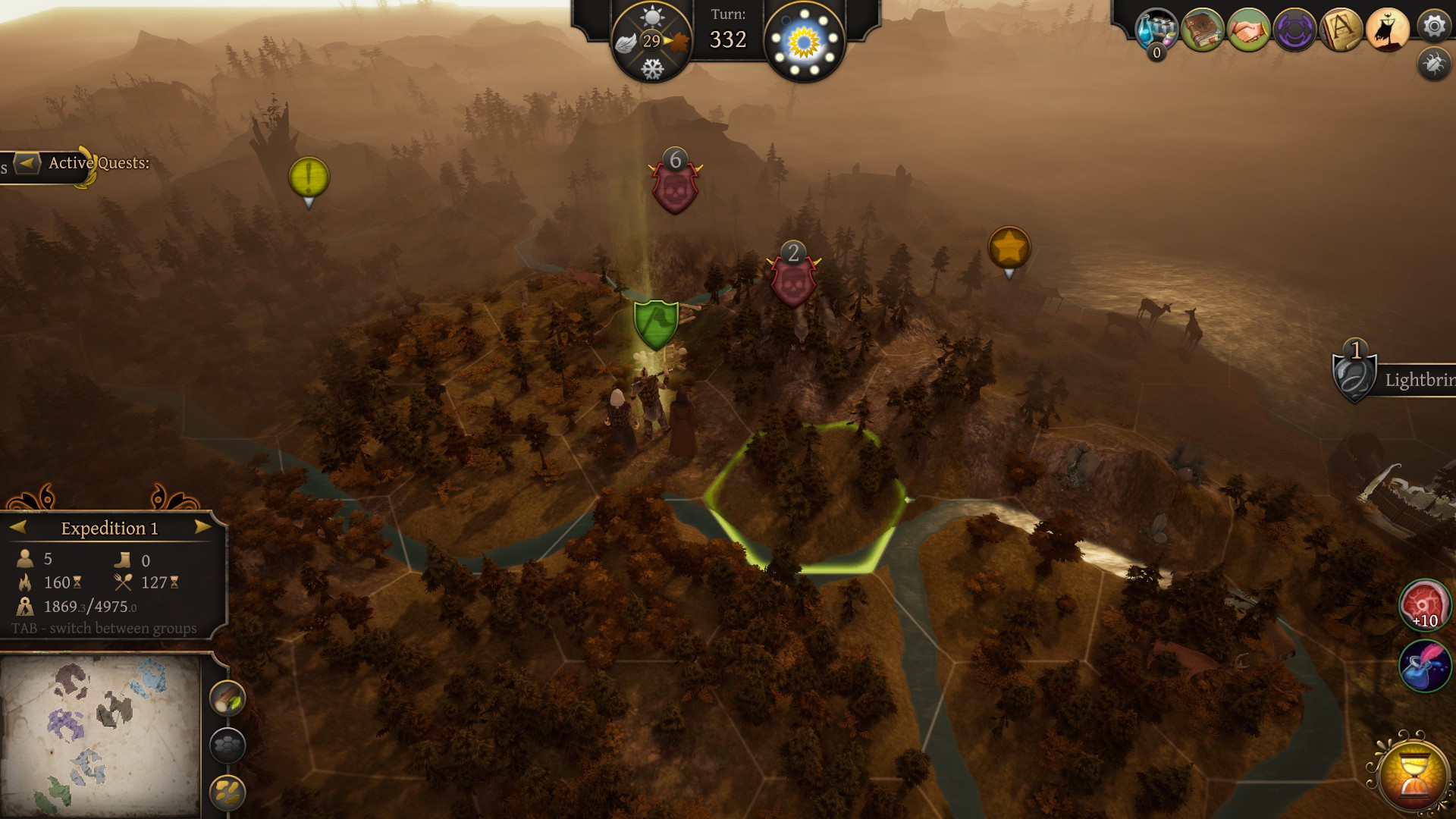 It wasn’t long before Cabbage Joe and his retinue were attacked by some hungry wolves. Despite their obvious confusion at why they were defending a man whose only skill in life was acquiring large amounts of leafy veg, the party sprung to his aid. Such challenges in Thea 2 come in three flavours. You can hit things, you can hit things with your mind, and you can hit things with your soul. Each character has six different statistics, two of which correspond to each type of challenge. An attempt to slay an evil pine cone demon tests your physical skills, but you could alternatively try to convince the pine cone to abandon his life of crime and go find a nice Christmas tree to relax, which would test your sanity. Which makes sense because, mate, that’s a pine cone. Characters have separate health bars for each type of challenge, all of which are potentially fatal if they drop too low. This may sound needlessly complicated, but it usually comes down to checking what your party is best at, picking a colour, and playing a card game. 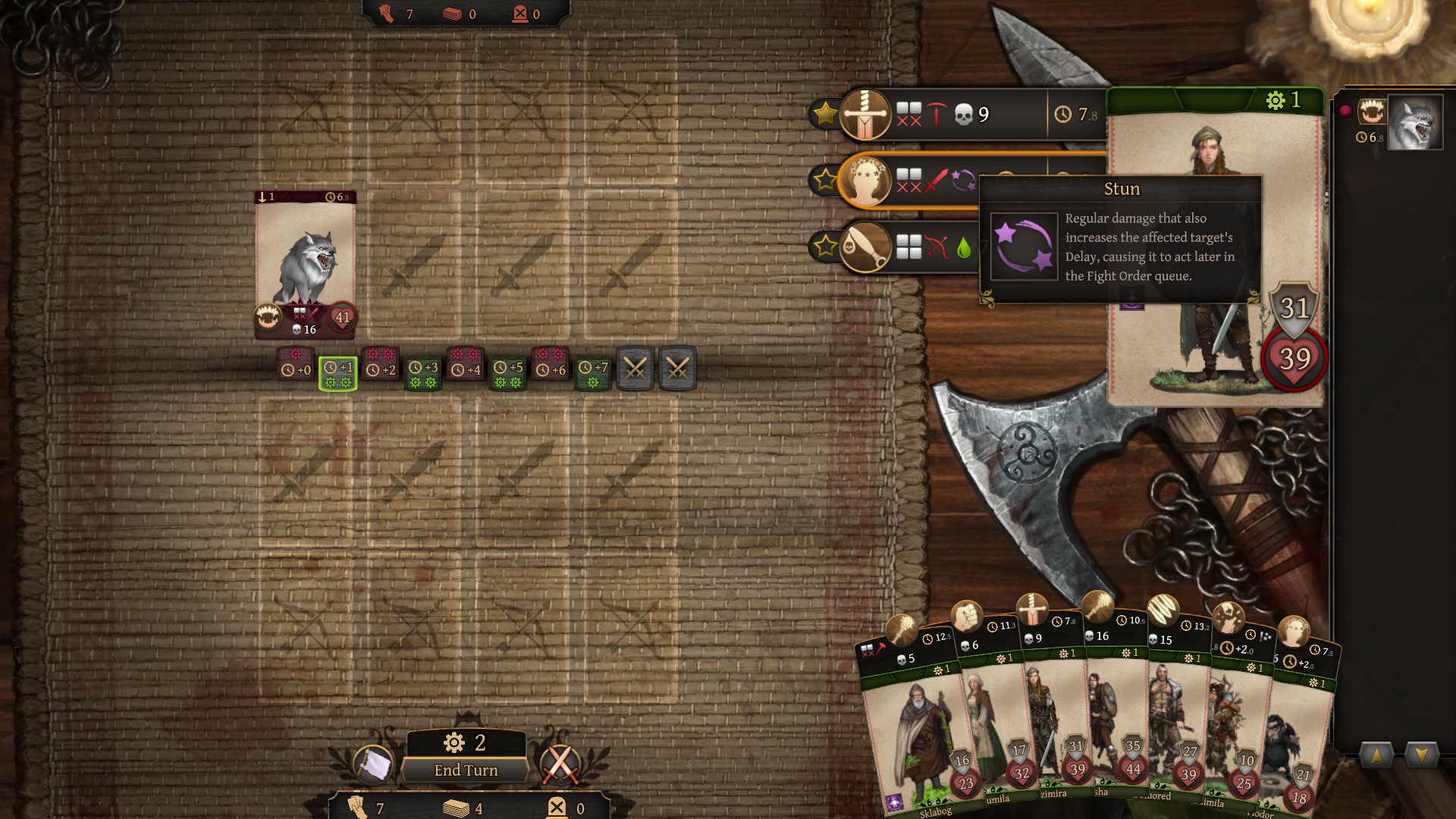 This card combat is based around action points, turn order, and using abilities to maximise the effectiveness and speed of your own actions while slowing down your opponents. It’s turn-based, but the game also keeps track of a ‘delay’ counter to decide which actions are resolved first. As the planning phase progresses, you’ll be given more action points to use, but also steadily increasing delays. You can save action points for more elaborate plays in later phases, but also risk taking a lot of damage first as a result. You’re also penalised for relying too heavily on one character, as repeating the same actions with the same character costs additional action points each time.

Some encounters don’t give you a choice in which skill to test, however, so you might end up being forced to watch in horror as your scouting band of warriors headbutt each other to death over a particularly fiendish riddle. You can and will, after cornering yourself into unwinnable encounters, be forced to contend with the occasional party wipe. It’s here that Thea 2’s fiendish roguelike tendencies emerge from the whimsical waves of happy adventure, like a hydra from a fishbowl, and munch on your progress. Dead or otherwise incapacitated characters are gone forever. If your main character gets smushed, you’re given a chance to sacrifice two others to bring them back to life. If you can’t, or don’t want to, then that’s you finished. 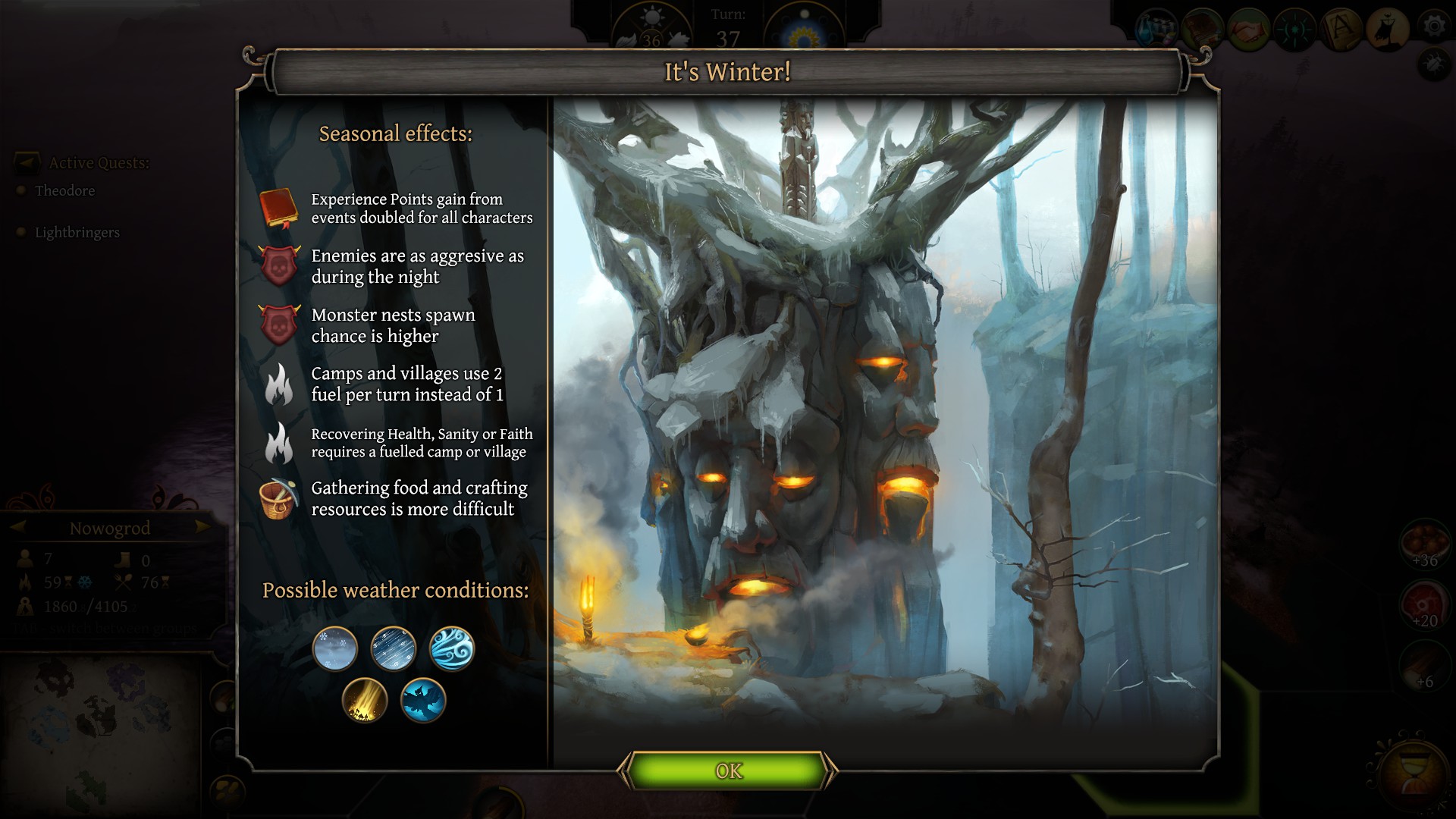 The game then tallies up how many pinecones you battered, turns survived, and other heroic deeds, and awards you some ‘god points’ which you can use to unlock more gods and bonuses to use on your next run. Cheaper bonuses might be things like some extra starting experience or the aforementioned magical crow of perception, whilst more expensive ones might get you let you select a rat as your main character, or use powerful magic weapons.

This is all very nice and informative and excellently written, I hear you cry, but tell us more about Cabbage Joe. Please, calm yourself. I will now continue. 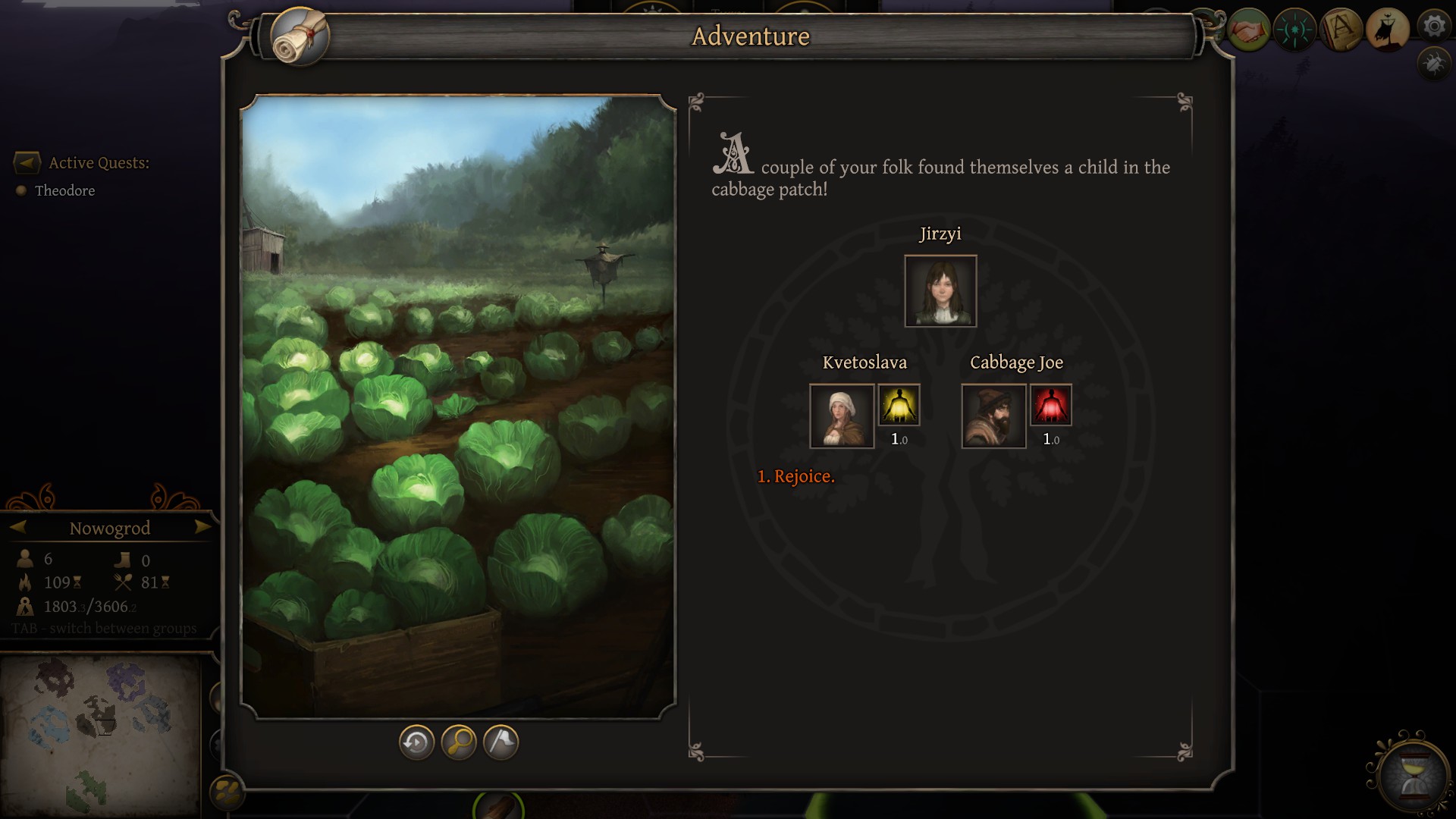 On top of being a card game and an RPG, Thea 2 purports to be a 4X game. This is debatable, but since genres are big slippery, stodgy, ephemeral things, like the porridge-coated ghost of a beached whale, I’ll take it. Cabbage Joe was probably sitting on a beach making necklaces out of shells or something when the gods of genre convention punched through the fourth wall and informed him it was time to build a settlement. This is the ‘expand’ portion of the presentation over, as you can only actually build one village.

Settlements are useful for a lot of reasons, but mostly they allow you to create buildings which confer all sorts of bonuses on your party. You can build a sawmill to automate wood gathering, a school to improve research, a trading post to entice traders to visit, and so on. There’s only around ten buildings in total, with most of them becoming unlocked when you collect higher tiers of resources. A simple wooden watchtower might provide a meagre bonus to your party's health regeneration, while a watchtower constructed from rare crystal wood does a much better job. Rare resources need to be crafted from other slightly less but still extremely rare resources, and each one needs to be researched before it can be put to use. Building itself works the same way as gathering and crafting. You set some suitable party members to the task, and hit ‘end turn’ until something good happens. 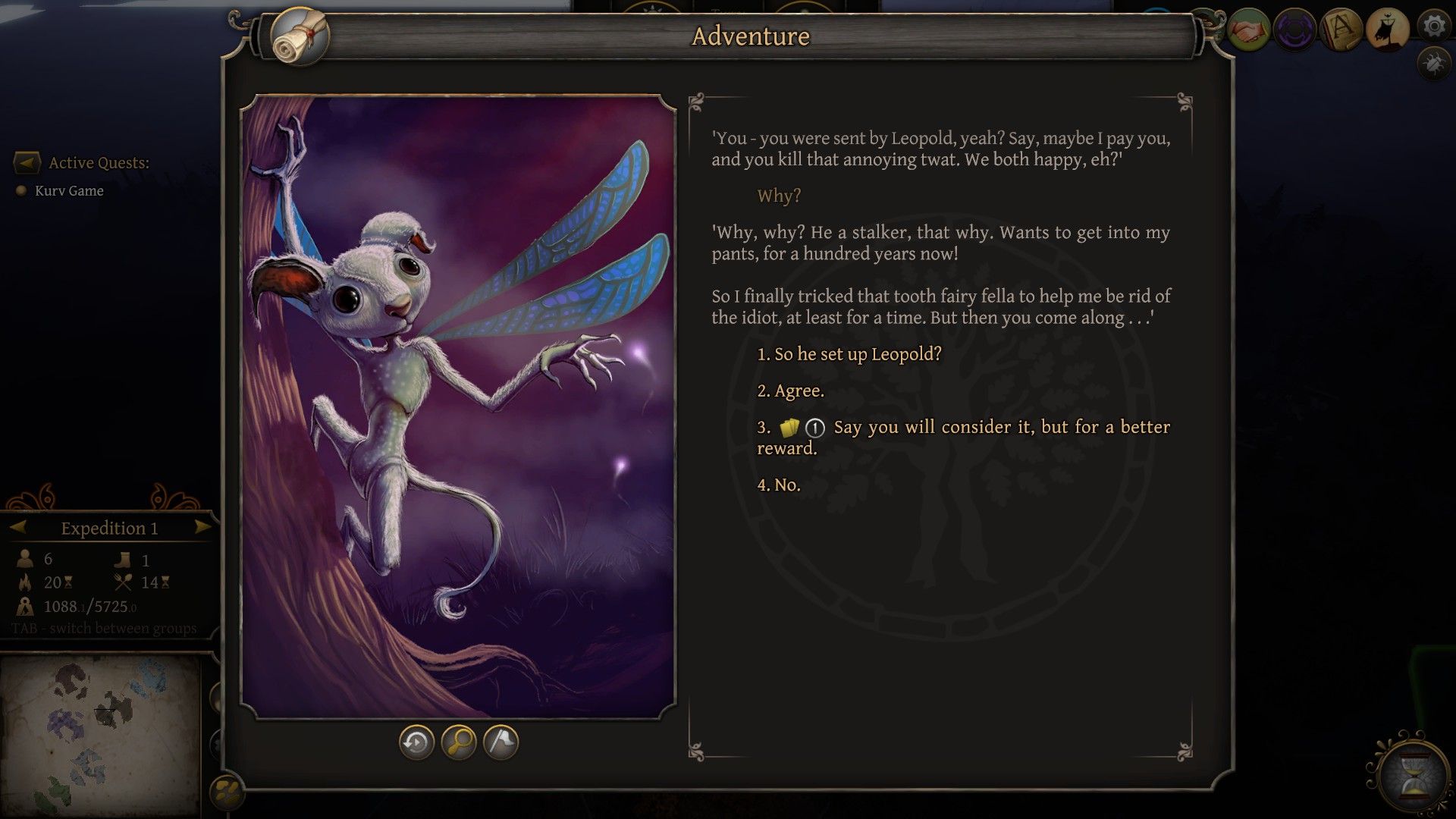 I’ve spent a lot of time here talking about how the various statistics and systems work together in Thea 2. It’s a complicated game with a lot of ideas, and almost nothing I enjoyed about the game seemed like it was a result of them. Thea 2, like so many roguelikes, is a little box you poke to make stories come out. A bard with math for blood and dice for a tongue, humming the refrains to a hundred disparate ditties and leaving you to reconstruct them into something coherent and exciting and hilarious and odd.

Thea 2 isn’t the hours I spent numbly crafting and cooking, or the card combat which I ended up auto-resolving ninety percent of the time, or the genuinely frustrating way my beloved Cabbage Joe was mercilessly crushed by a camp of bandits after clicking my way into an unwinnable encounter. Thea 2 is the child brought to my villagers via stork, who grew up to be a purple whirlwind demon, and spent their life studying rat corpses so I could learn how to build wishing wells. It’s the time my entire party got sick because a demon decided it would be fun to poo in my food supplies. It’s friendly dwarves who rob you blind after extending your hospitality, and evil-looking goblins who bestow blessings on you after sharing your food. Thea 2 is interesting in a ‘may you live in interesting times’ sense. An imperfect thing that I can’t help but feel affectionate towards.