If you've ever come back from holiday to find that your flatmates/children/parents have flooded the kitchen/dyed the cat blue/thrown out all your original Jethro Tull LPs, then spare a thought for the Tomb Kings, Total War: Warhammer II's first all-new DLC faction. Once upon a time, they ruled a pseudo-Ancient Egyptian empire in which scholars quested for the secret to eternal youth and tyrants went merrily to the grave, confident of resurrection in paradise. Several millennia and a couple of necromancy wars later, the mummified Kings stumble from their pyramids to find their bodies reduced to KFC leftovers, their southern homeland of Nehekhara trashed, and the continent awash with bearded barbarians, talking rats and stupid sexy dinosaurs.

Unfortunately for all the younger races, the Tomb Kings are far stronger in death than they were in life. I spent half an hour getting to grips with their quirks, including a series-first crafting system. Here are my thoughts.

Not all undead are alike. The Tomb Kings have some things in common with Total Warhammer's existing post-death faction, the Vampire Counts, but they have plenty to differentiate them as well. Where the Vampires are a freeform plague, raising hordes in the blink of an eye and corrupting their neighbours, the Tomb Kings are all about fortifying their turf and recovering the treasures - and terrors - of their golden age. 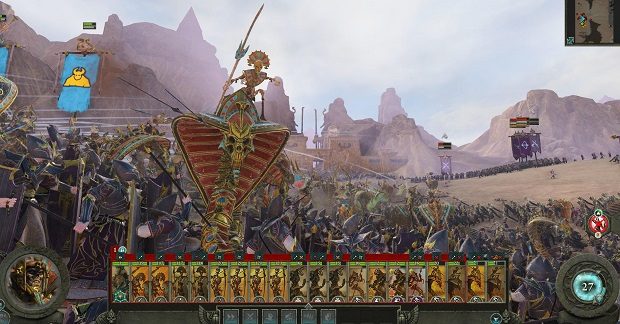 In battle, they enjoy the same broad advantages and disadvantages as other undead: they're impervious to fear, with basic units crumbling to dust instead of routing, but they blend the threat and sorcery of the Vampire Counts with decent archery and artillery. On top of that they have a cool feature called the Realm of Souls bar. The bar fills as your units take casualties, like a big bucket of ectoplasm. At set intervals it slops over, spilling lifeforce back into the mortal plane and triggering mass heals and resurrections among your skeletal units. Top it up completely and you can summon a detachment of Ushabti, living statues of the Nehekharan gods who are superb against anything man-high and squishy.

This adds a layer of calculation to the standard undead tactic of swamping enemy elites with unbreakable cannon fodder while your munsters chew up their supports. Sacrificing units is rarely sensible regardless of faction, but as the Tomb Kings, the more cheapo skeletons you throw into the blender, the better for the rest of your army. As the opposing general, you'll want to keep something in reserve to manage the eventual Ushabti comeback and resist the temptation to massacre the Tomb King grunts, lest you rejuvenate the heavy-hitters around them. It's a recipe for some gruelling clashes, with the line between a Pyrrhic victory and a close defeat drawn very thin. 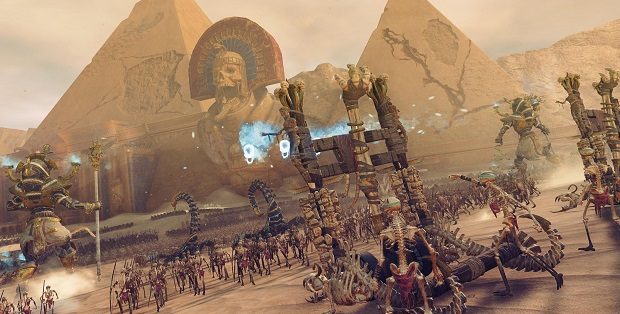 Tomb King units come in roughly two flavours, the trundling skeletal legions and powerful vintage war constructs such as mecha-scorpion skirmishers, rampaging sphinxes that may double as missile platforms, and my personal favourite, the Hierotitan, a big stone thug with a staff and the ability to incinerate things by looking at them. As fearsome as the latter may sound, I suspect that Tomb King archers and catapults will prove more of a headache for players used to stomping vampires - especially Orc leaders, who have morale issues vs undead aplenty without having to worry about a relentless bombardment.

The Tomb Kings are weakest as an army when you're on the offensive, especially against dwarves and turtling Lizardmen early on in the game. “I've been doing a campaign recently as Arkhan the Black,” notes associate designer Gary Deans. “At first he'll come up against Bretonnians, who are quite fragile, so you can go through them quite easily with your starting units. It's when I come up against the dwarves that I just hit a brick wall. I had to go around their main defences to their more isolated settlements to get rid of them, because dwarves are hard for the Tomb Kings purely due to their high melee defence, armour and overwhelming firepower - they can just blow you away.” 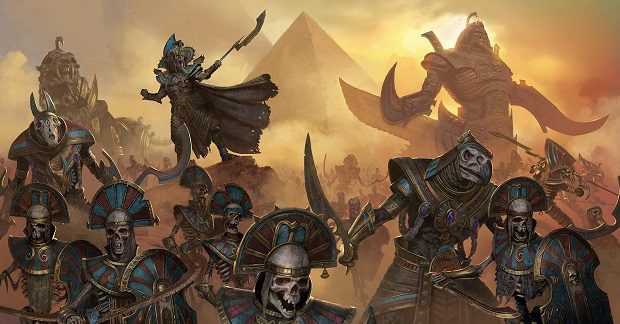 In terms of their economy, the Tomb Kings have a hefty base advantage: you don't need to pay for unit recruitment or upkeep, because every last resident of Nehekhara is already a willing undead thanks to all those centuries of blasphemous experimentation. The catch is that each unit has a strict initial recruitment capacity that must be raised by building structures and resurrecting noble dynasties, the Tomb King equivalent of research. Rather than recklessness, this actually encourages caution, as you balance a fundamental resilience against a greater risk of spreading your forces thin when you topple provinces.

The other major departure at the strategic level is crafting, whereby you combine trade goods with Canopic Jars (also used for research and construction) via the Mortuary Cult to obtain weapons, talismans and Legions of Legend, such as Carrion fliers equipped with noxious bombs. “Trade goods have been in many, many Total War games and in the past they were just a way of making a little more money,” notes Aldridge. “But now you're incentivised, because you might want this bespoke custom unit that can do stuff nobody else can do, or you might want this legendary piece of armour.” The Tomb Kings don't benefit as much from post-battle drops as other factions, he adds. “They're about reclaiming their civilisation, taking the treasures that were lost to time or those horrible Greenskins, the treacherous men of the north who've invaded Nehekhara.” 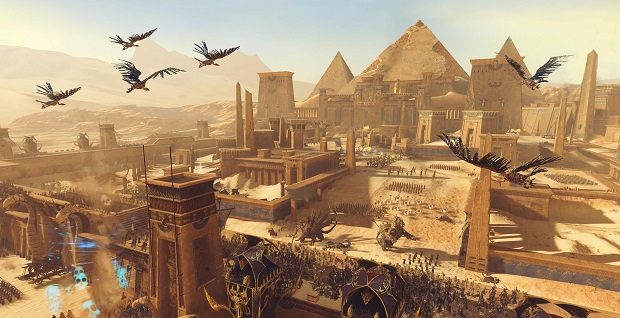 The Tomb Kings roll with four Legendary Lords, each playable in both the base Vortex and expanded Mortal Empires campaigns. The easiest to pick up is Settra the Imperishable, king of kings, who begins each Vortex campaign in Nehekhara itself, just below the Orc Badlands. Settra is good at three things - population growth (which presumably translates here to digging out mausoleums faster), keeping the peace and ploughing through footsoldiers in a flaming chariot. A little to the north there's the aforementioned Arkhan the Black, who is chummy with vampires and can recruit their units once you've erected certain structures. Across the western sea in Lustria you'll find High Queen Khalida, who is very much not chummy with vampires and confers poison attacks and bonus ammunition on all her units. Last but not least, Settra's disgraced high priest Khatep gets to hang out with the Dark Elves in Naggaroth, where he specialises in faster research, army movement and casualty replenishment.

Unlike the Lizardmen, elves and Skaven, the Tomb Kings don't compete for control of the Vortex in Total Warhammer II's unexpanded campaign. They have bigger fish to fry in the shape of the Books of Nagash. The Nagash in question was a dread necromancer who, back in the day, came close to zombifying the planet before the Skaven engineered his downfall (and who may, Aldridge hints, show up in the game later). Scattered across the realm at random, each book confers a powerful faction-wide buff. Collect all nine and you'll unlock an optional ending scenario by the Black Pyramid at the heart of Nehekhara. 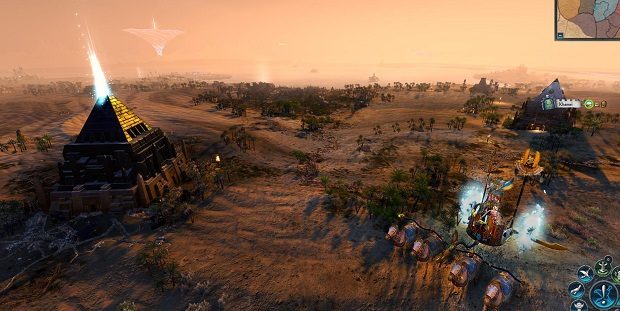 The Tomb Kings can also perform rites that don't play into the endgame. The Incantation of Khsar generates sandstorms throughout all your provinces, shredding trespassers while raising the odds of a successful defensive ambush and allowing all your units to stalk. The Great Incantation of Geheb, meanwhile, lets you summon a whirling cloud of scarabs.

The lack of a dedicated mini-campaign is disappointing, but Aldridge contends that this is based on feedback to previous DLC packs, and suggests that between Mortal Empires and Vortex, seasoned Warhammerers won't feel the omission. “The Tomb Kings in Vortex are very much story-driven with an epic climatic finale, as with all our DLC packs. In Mortal Empires we still have all the nice new features like crafting and the Books of Nagash, but they don't play into that driving victory condition - you get to fight who you want to fight.”

Watching The Creative Assembly bend Warhammer without breaking it has been one of the great pleasures of the past few years, and the Tomb Kings feel like a strong addition to the roster - a breath of fresh air for vampire generals (and Skaven packmasters) who are weary of skulking in the shadows and scavenging from battlefields. The Kings aren't some intangible horror, nipping and jabbing - they're a monumental past hell-bent on dislodging the present, stomping all those upstart civilisations back into the sand. I look forward to finding out just how much havoc they can wreak.

Rise of the Tomb Kings will be available on January 23rd and will require the Total War: Warhammer II base game to play.