You have to respect clever, and clever is oozing out of Tower Of Time [official site]. Not just an RPG with the guts to try its very own combat system far more intricate than us dungeon crawlers are used to, but also the use of Early Access in a way that makes it seem like an advantage to the player rather than the developer.

Tower Of Time is, at first glance, a traditional isometric-ish RPG, presented in beautiful swishy modern graphics. Click the mouse to move, click on things to interact, attribute skill points and skilfully assign attribute points, and worry about your armour. On top of that, and perhaps a touch crucially, it's also good at these things. It takes place in a familiar fantasy setting featuring a rural human world where cataclysmic events leave almost no sunshine, in which societies are falling as food becomes scarce, and a hero whose childhood marking by a hidden magical throne might make him the one who can change the future. Soon you learn of other regulars, the elves, the orcs, and so on. The writing is a touch purple in places, and definitely leans heavily on the old "for it was to be"-type fantasy stodge, but the atmosphere is immediately established and the characters likable.

Set in a magical tower, buried upside down in the ground and forgotten by generations of humans, you play a character that - for plot reasons - you don't actually see much. Instead you control a gang of his chums, who explore and descend, with the intention of finding and wielding these unknown and potentially dangerous powers in the hope of rescuing your dying world. But it's during your first combat encounter when you realise that this is also rather different.

And, if I'm honest, at first a little disconcerting for me. Because I am not Mr RTS. In fact, Mr RTS is my sworn enemy, and the two of us rarely speak. While obviously multiple RPG games have attempted to implement RTS combat in the past, perhaps most famously the Spellforce series, I've not seen it done like this before. Far smaller scale than Spellforce's fields of battle, this is more of an extension of the pause-based combat of latter BioWare games, taken to its natural strategic conclusion. Enemies move in real-time, and while you can slow time down to issue commands, you must think on the fly as you play your characters' abilities and unique skills to deduce the correct methods of attack.

Borrowing the JRPG concept of having fights take place in a special playing field rather than on location in the main game affords the combat an almost sports-like set-up, where the pitch is pre-defined (albeit with semi-randomised layouts of walls, spawn points and so on so the fight is different each time), and how you use it up to you. Different enemy types have very different approaches to attacking you, and rather than simply choosing who to hit and with what, you're asked to think slightly further and work out ways to manipulate enemy placement or movement. Maybe you'll try to split them up to make them weaker while defending your more fragile ranged characters, or perhaps you'll place too-temporary magical walls across the battlefield such that your tanks can rush in to absorb blows.

Enemies come in waves, and from a number of spawn points, which also dictates how you position your characters, and how you attempt to approach any battle. You can see what percentage of the attack you've countered so far, but you don't know what's coming next beyond the hint of the enemy types spied before the battle begins.

The complexity of this is designed to become more important the higher you set the difficulty, with a Story mode for those who don't want to worry at all, Easy for breezing through it, Normal for me to struggle with because that's the mode you're supposed to play when reviewing, and then a couple of levels above for those who want to test themselves. According to the game, at the highest difficulty the developers say you'll have to somehow work out the exact right set-up of your own fighters to match the attack and perfectly execute your moves. Eek

For me, on Normal, I'm managing! I've lost a couple, but won them on the next try, and felt bloody great about it. I guarantee this means that anyone who cares about real-time strategy, or even their advanced RPG tactics, is going to find Normal too easy. I know this from decades of reviewing RPGs, commenting, "Cor the combat's tough on Normal!" and being met with varying degrees of "huh?" from harder types. The tougher levels are there for you, but for those like me, rest assured this is - so far as I've reached - manageable. And indeed you can switch the difficulty down at any point.

Which brings us to that other Clever. An RPG in early access is perhaps often to be avoided. Who wants to play an incomplete story-driven game, right? But in a Larian-like fashion, newbies Even Horizon have very smartly released with the first third of the game feature complete. The second third is due later this year, and the final portion on full release early next. The early access is being used to see how players respond to the combat system, to test it in fire, and to tweak accordingly, such that on the release of the complete game they should have the encounters neatly balanced. So sure, going in now might mean you hit combat spikes or plateaus, but you won't be playing a game that's still covered in scaffolding with half the rooms undecorated. It's rough in places, absolutely, but it feels solidly playable. 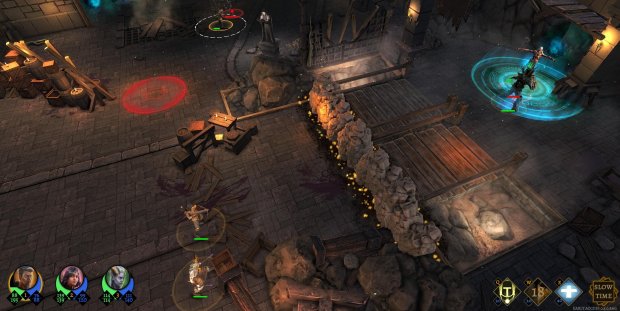 There are, it shouldn't be any surprise, areas that need a good deal of work. And it's mostly in feedback, both major and subtle. After a while pootling around, completing the pleasing array of missions on the first floor of the dungeon, I experimentally took a trip back to the surface whereupon I discovered - by accident - that I could qualify for an upgrade. Upgrades are very unusual here, not reliant on gathering XP, but rather gold and blueprints. I didn't notice the game alerting me that I had all I needed for this if it did, and then to be able to train my characters to a new level I had to visit the Armory to buy the ability, then visit the Barracks to spend even more gold training each character up to level 2. What a muddle. After this, more skill points are available, which is pretty essential for the ramping difficulty in the tower.

More subtle feedback issues come with the lack of any sense of impact of a job done. Make a new item in the Blacksmith and there's no "clunk" or "tada" or anything. So much so that I accidentally made two identical breastplates because there was no sensible indication that it had been done. What a waste of crystals!

Combat, which is of course the reason it's presently in early access, could do with some significant work too. Most immediately, with the addition of some AI scripting for your characters. Each has an array of abilities, but left to their own devices will just spam their most basic attack on the enemy nearest. It'd be splendid to be able to instruct your bowswoman Maeve to sling some fire arrows on occasion, or have druid Aeric think to plonk down a healing totem when another hero's health is dangerously low. Micromanaging the crew is, of course, a big part of the point, but when you're directing tank Kane to taunt a mob to distract it, and then having him throw up a magic wall to prevent attacks from another side, you physically can't also be getting Maeve to place a Hunter's Mark down on a busy spot of enemies. To be able to pre-program a few conditional attacks or defences would make a big difference.

Also, good gravy, it needs a quicksave. The game is heavily reliant on your saving to maintain progress - get into a battle you're simply not capable of winning yet (and not all fights are player-initiated, there are ambushes), and you can either endlessly, pointlessly repeat it after every defeat, or go back to your last save. If that was a good while back, then oof. That to save involves Esc, Save, click slot, Save, Back, Back is perhaps a little much when there's an F5 key sitting around doing nothing. Oh, and the other minor tweak I crave is a button to press to reveal interactive items. Not for treasure, as I get that this is a bonus gained by scraping the hidden corners with the cursor, but for important story items and the like, it'd be nice not to miss them.

It's very pretty, too. The tower, upside down as it is, is also very magical, and the gaps between the floors are great dangerous stretches - that's something neatly displayed as you walk the sometimes-impossible ceilings. Battles are often extremely lovely to look at too, especially the neat colour choices for slowed time, versus the traditionally ARPG bright purples and greens of full-speed battle.

There's an airy arcadey quality to the exploration, but the depth pours in via both the details and the combat. Where it sorely lacks is in establishing the characters you control. An extended opening sequence sees you play as a young boy, then that guy as an adult, and then suddenly he's just sat in a chair unseen while some friends it doesn't even vaguely introduce are the ones you play. You get to know them a bit as they chat, but it desperately needs to make the player care about them at all from the off.

But more than anything else, I'm constantly bowled over by just how complete and solid this feels. At one point, nosing around a library, I chanced upon a book that when clicked on offered a few minutes-long animated, voice-overed cutscene! There's piles and piles of lore here for those who want to read it, and for those who don't there's still a decent surface story with intriguing themes of magic being an alien property to this fantasy world, and its impact on society.

I'm totally sold. I love this. It's a superb mix of easy-going exploration and smart-but-possible combat mechanics. And I'm loving it in a "right now" way, rather than in a "I can see how this will be great when..." way. I think some will find it too light, but honestly, there's enough games for those some, and goodness knows how hard it is when you ramp up the difficulty - I've no desire to find out. I think there's no greater accolade I could afford it than to credit it with exciting me about combat tactics - something that usually sees me running from a game with my arms flailing above my head.

This is a huge, deeply developed, beautifully crafted RPG, novel in all the right ways, and it's not even finished.