Train Station Renovation is coming out on Steam Early Access later this week. If it sounds like the sort of game published by PlayWay, you are correct, because it is. I was initially intrigued by it because train simulation games and renovation simulation games are both quietly but enduringly popular. The idea of a crossover between the two felt both odd and necessary at the same time.

It is a game where you go to derelict train stations and un-derelict them, picking up rubbish and replacing furniture and what have you. It sounds quite boring, and honestly it sort of is, except it also sort of isn't. Having played the first couple of levels, I can confirm that Train Station Renovation, far from being mundane, feels frankly bizarre. It has left me with nothing but questions. And lots of screenshots of sweet, sweet graffiti. 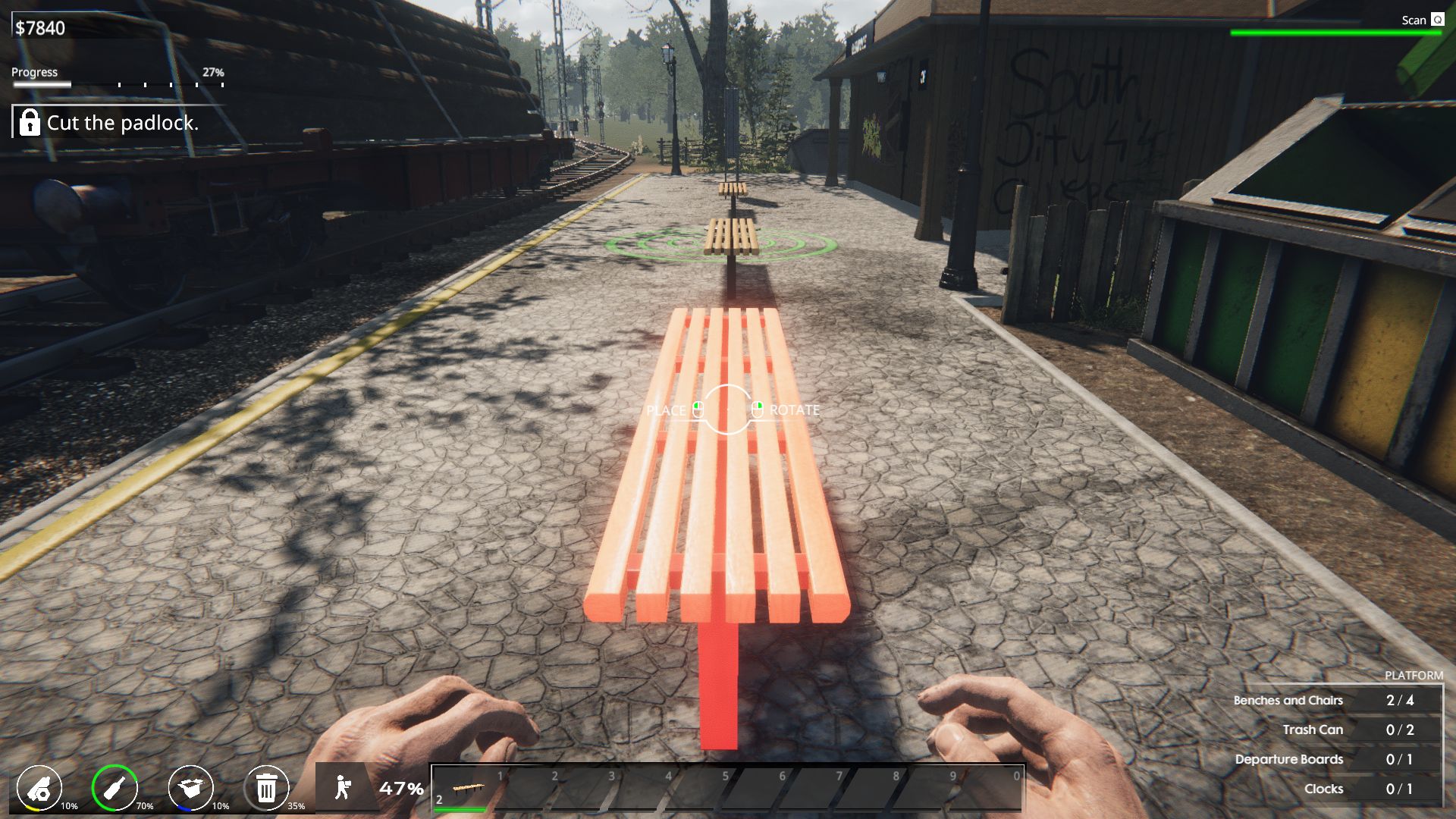 Aside from putting in ticket machines and replacing toilets, TSR is a mostly a game about sorting rubbish correctly. You can get a mixed skip, for chunks of concrete, old tires, and black bin bags of general detritus, but you can also get a recycling skip, which is segregated into glass, plastics and paper/cardboard. You get a monetary bonus for sorting your rubbish correctly, and a fine for putting improper bits in the recycling. It is a strangely deep system for refuse removal, but I quite enjoy it. 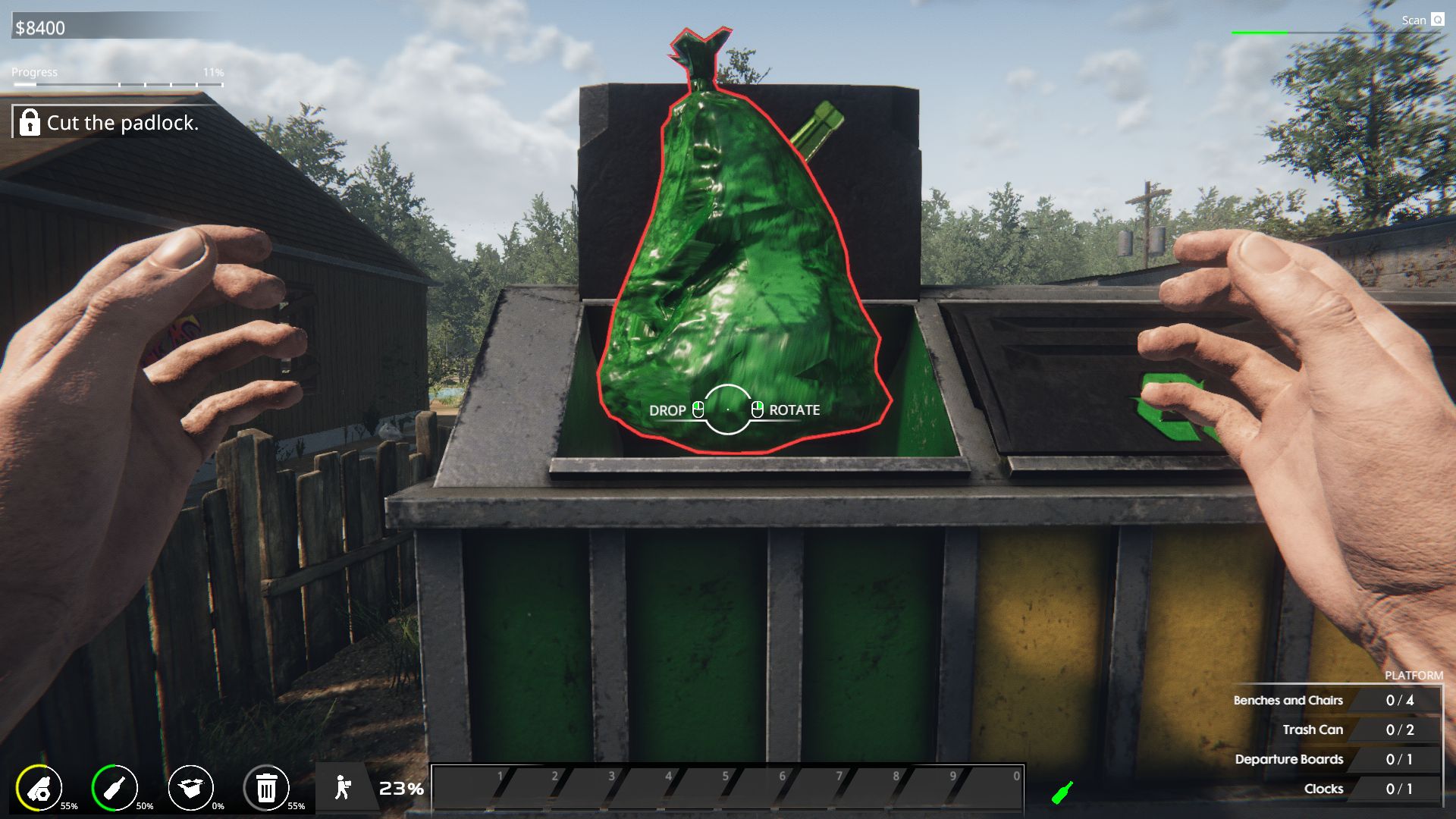 Like most games of this ilk, completing tasks like cleaning the floor, repainting walls, or scrubbing off the graffiti (we'll get to that) is a case of pointing in the right direction, selecting the right tool, and holding down the left mouse button. In something like House Flipper, this is fine, because the world - the premise - makes sense. You buy a house, make it nicer than it was when you bought it, and sell it on for profit. This goes on all the time, to a greater or lesser extent during economic turn downs.

But in TSR, the comparatively menial labour means my mind is free to wander and wonder. Rail travel is a weird one, isn't it? The UK has an extensive rail network, and it used to be even bigger. The village I grew up in used to have a line running through it, but when I lived there it was long since gone, the rails pulled up, but you could walk along the old route to get into town. It was a deadzone for phone signal. And these days, rail networks don't get expanded often. It's quite a big thing if they do. Look at HS2. 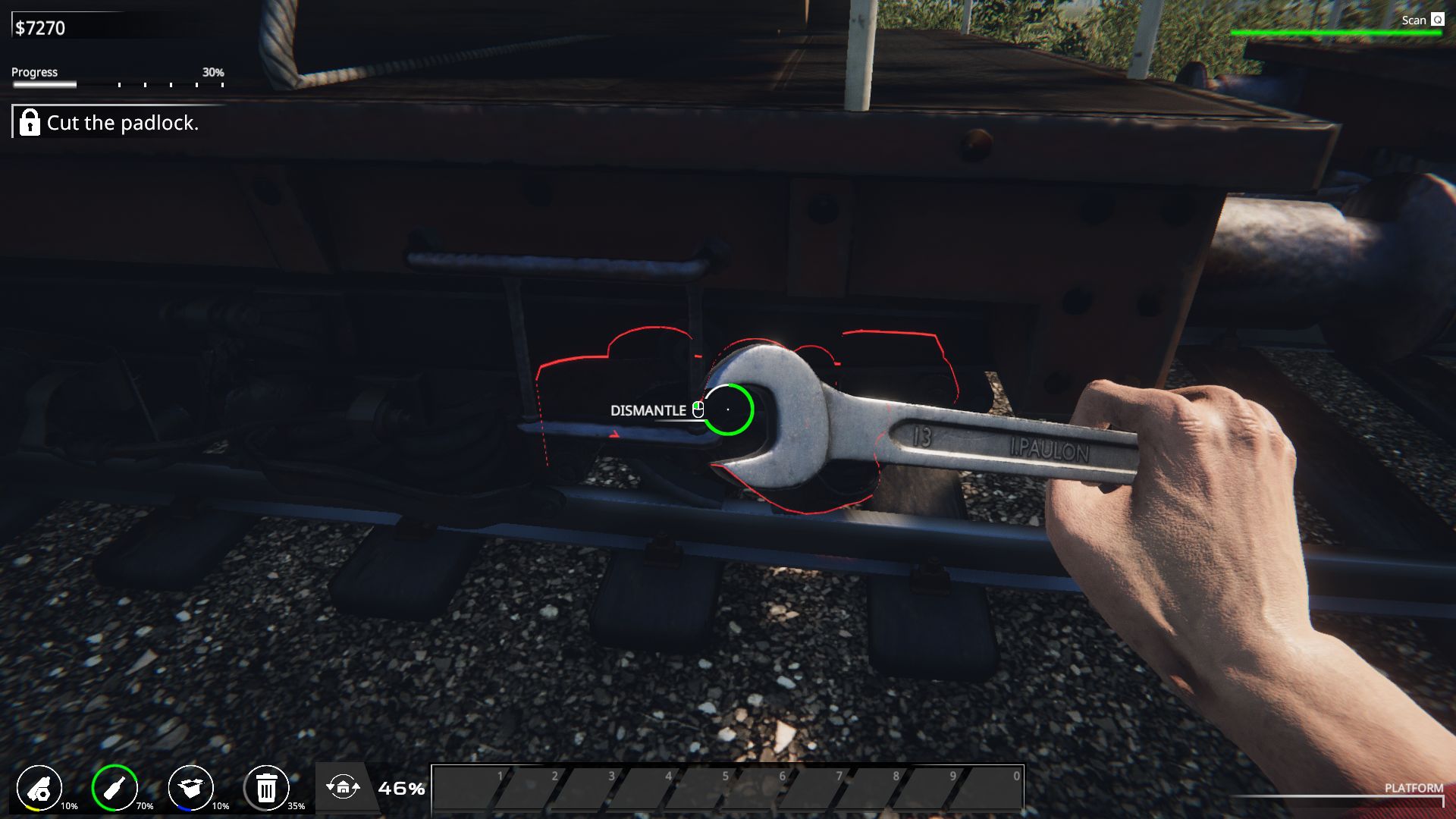 So, re. Train Station Renovation: first of all, and this may be my ignorance, but it seems weird that you're a one-man construction company that specifically renovates derelict train stations in one small area of the US. It doesn't seem like a growth market. There's niching down, and then there's niching out. I would also welcome more information about the county this is taking place in. Is the local government making robust investments in improving the transport infrastructure? Why do I suddenly have all these stations to renovate? Is the line still at all operational?

This may, I suppose, be expanded upon in future updates, as this is still an early access game. And on another level, mine is not to reason why. Mine is to place benches and sweep away cobwebs. And yet! In the first level I had to replace some broken wheel mechanisms on some carriage beds. They were carrying loads of timber, and were just... there, in the station. Do they belong to the station? Who left them there? 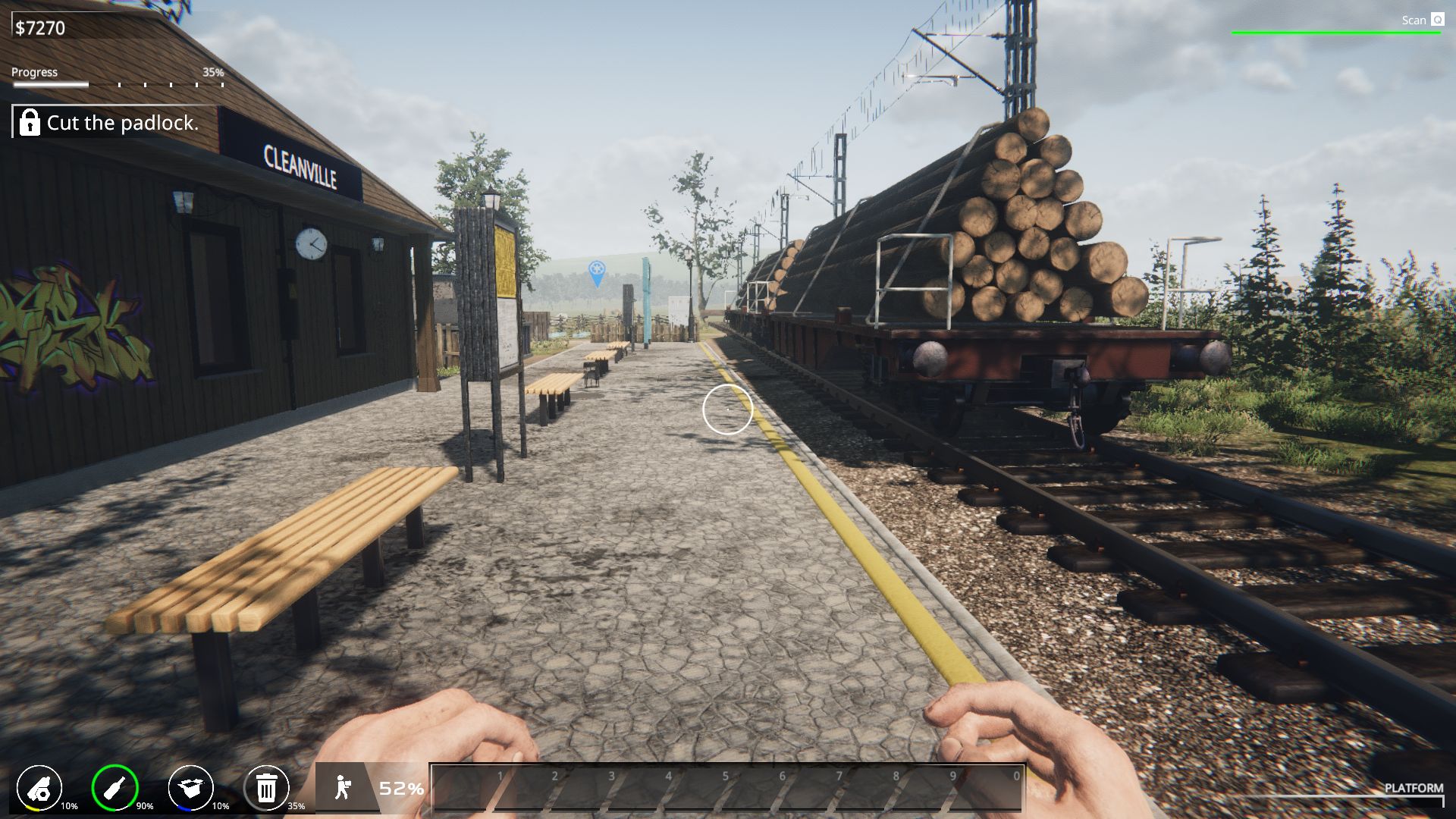 Also that same station has this photo of an eldery couple stuck on the wall of the stationmaster's office, and you cannot remove it, which makes that station canonically haunted if you ask me. 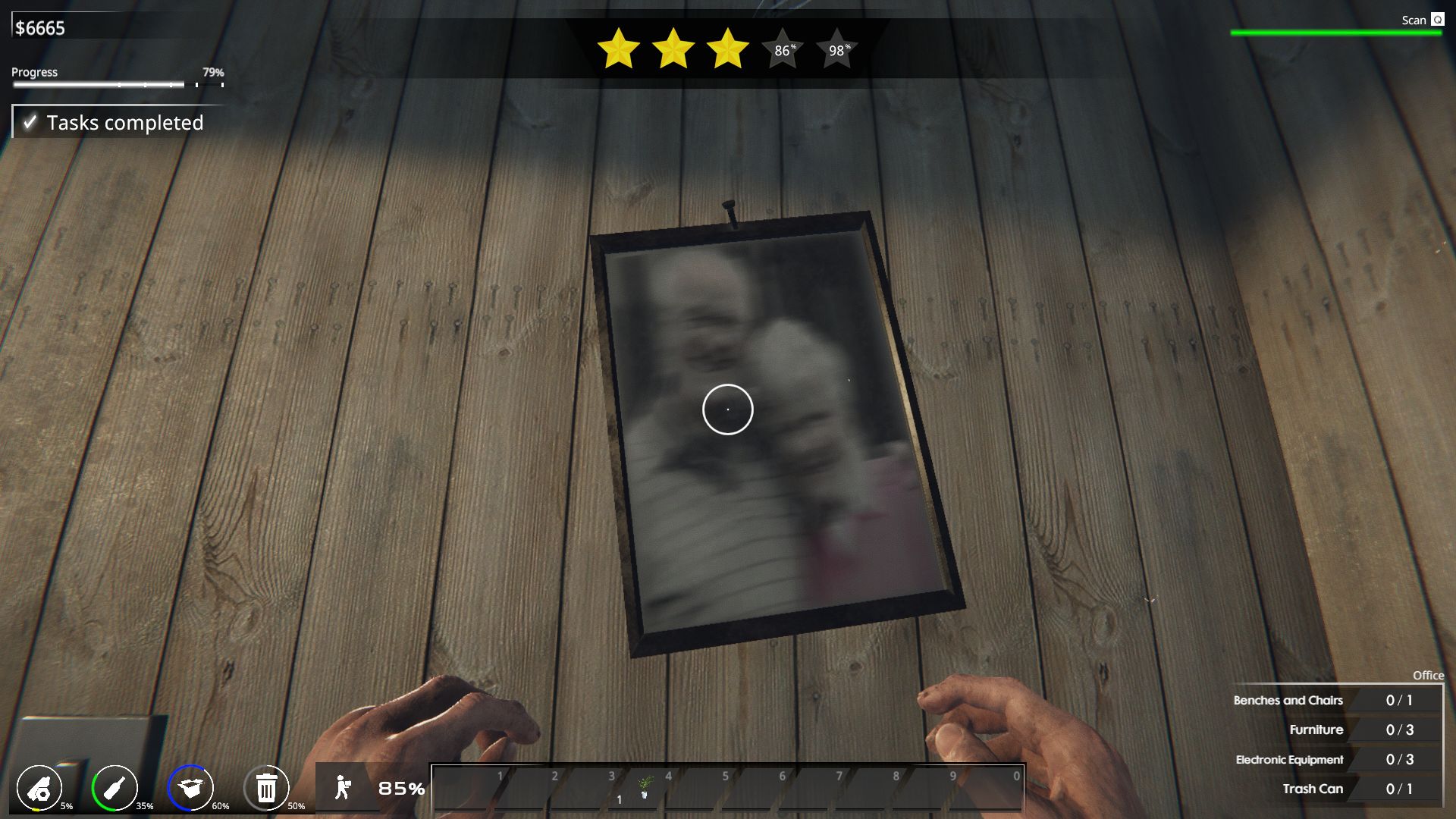 Finally, the graffiti in Train Station Renovation is amazing. You're supposed to clean it off, but a lot of the time I didn't bother, because it's a mixture of delightful nonsense and actual art. Here are some powerful examples I have seen so far: 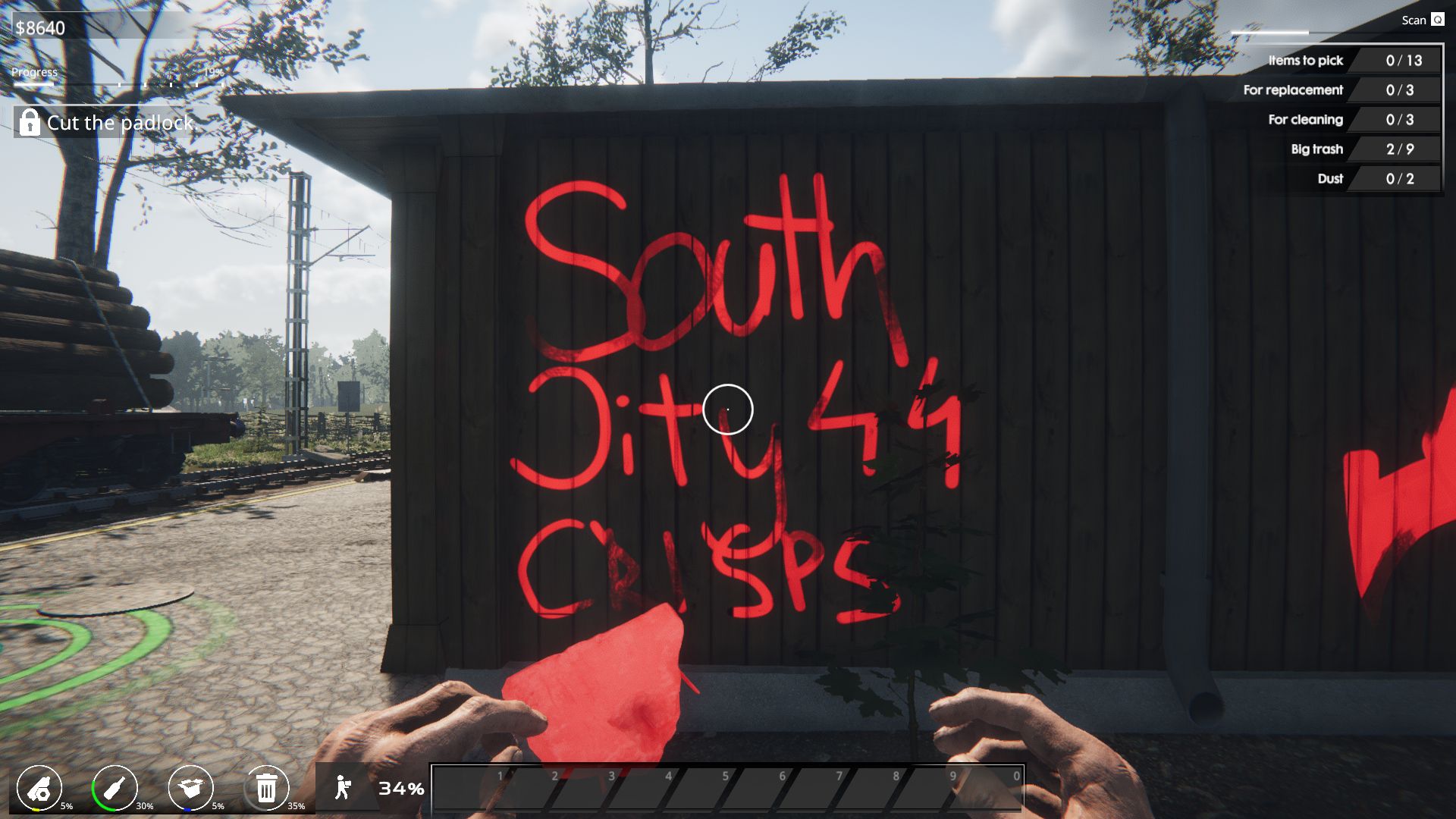 The area in and around the first station appears to be the stomping ground of a gang called the South City 44 Crisps. From the name, and the general quality of their graffiti, we can assume they are a rag tag band of 14 year olds who heard about the Crips and Bloods and got confused, poor darlings. I love them, and their graffiti. 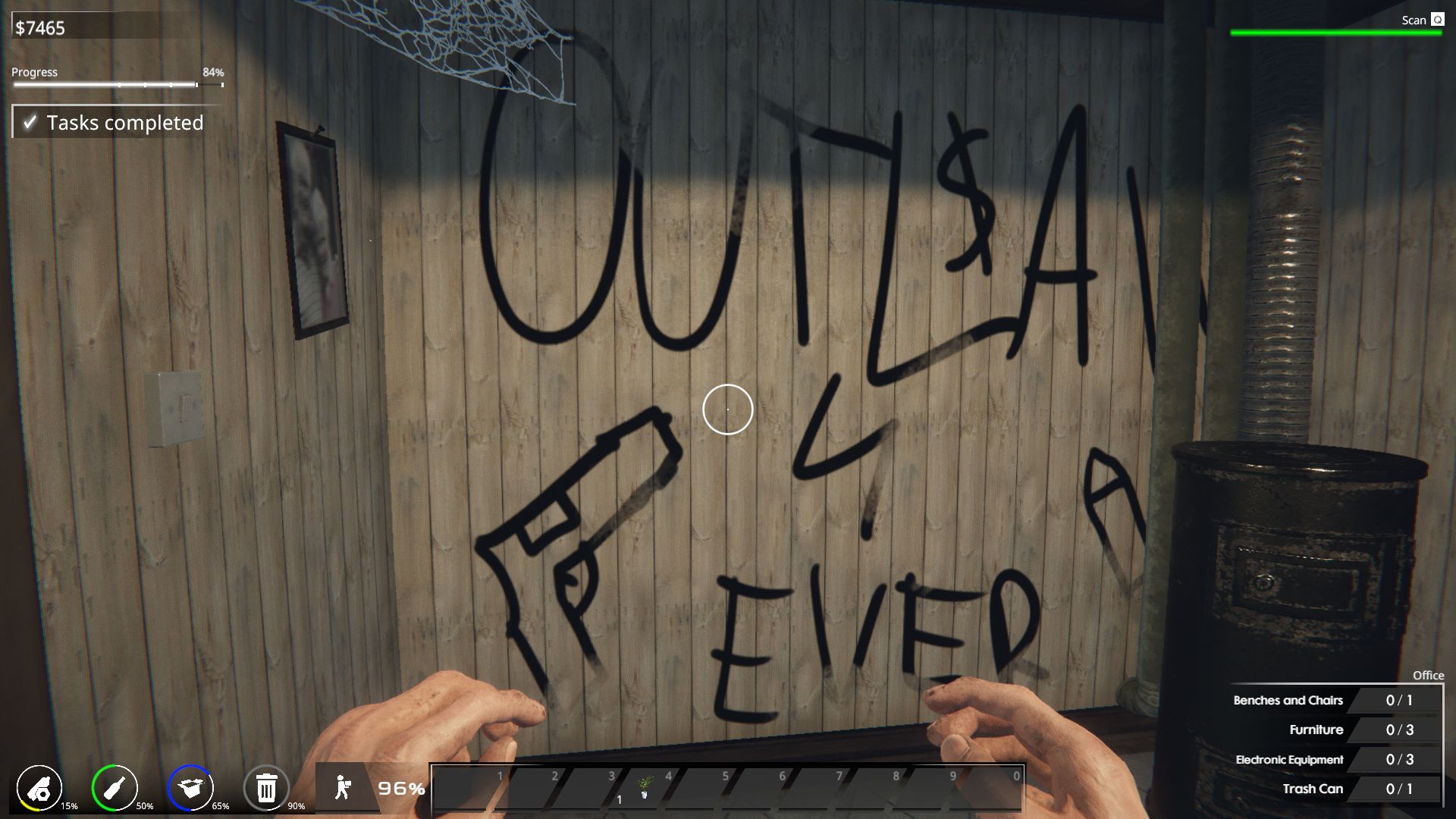 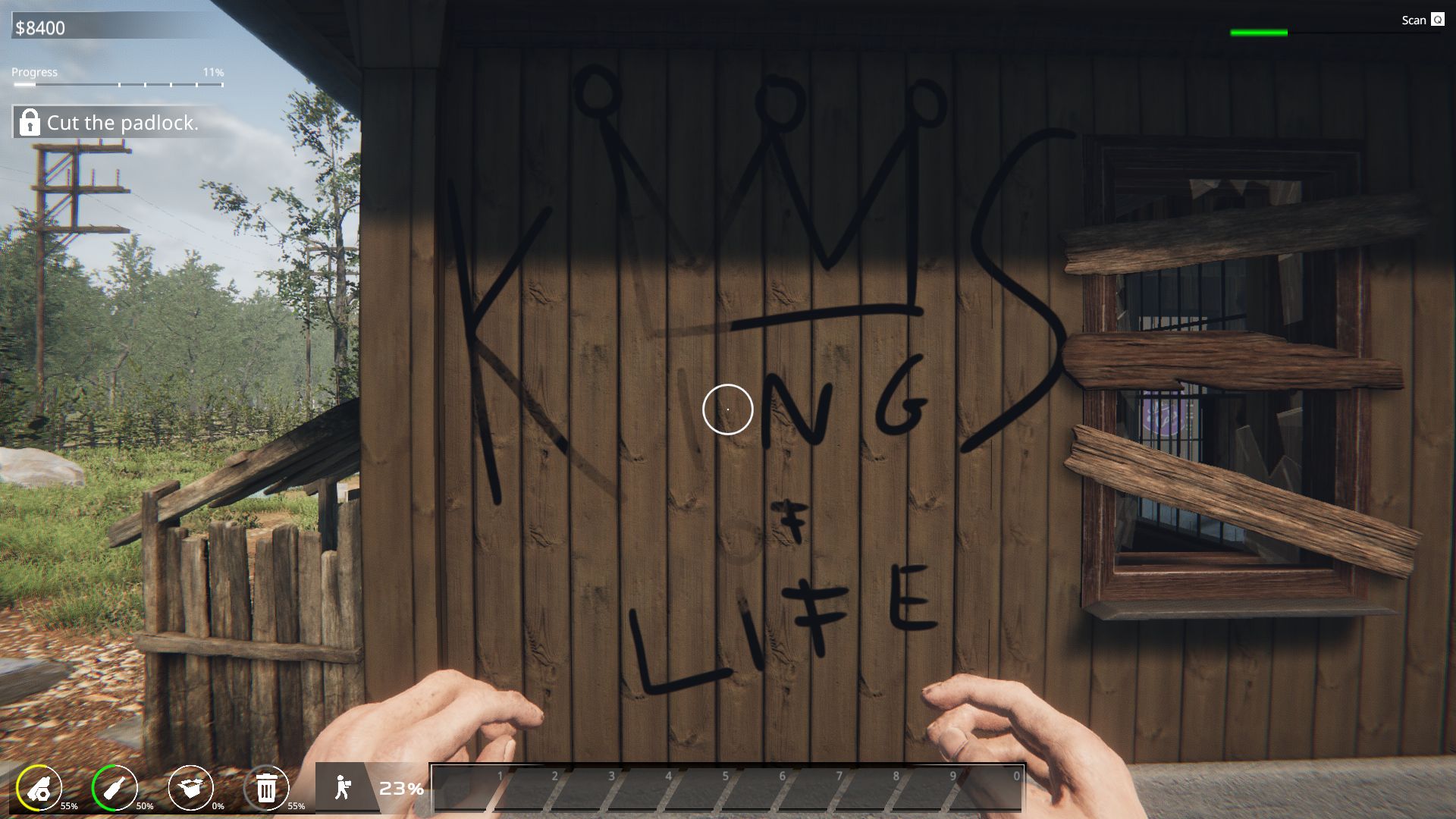 Slightly more advanced than the Crisps' work, the CLEAN ME graffiti was the only one I did actually clean with relish, because it was a clear imperative. 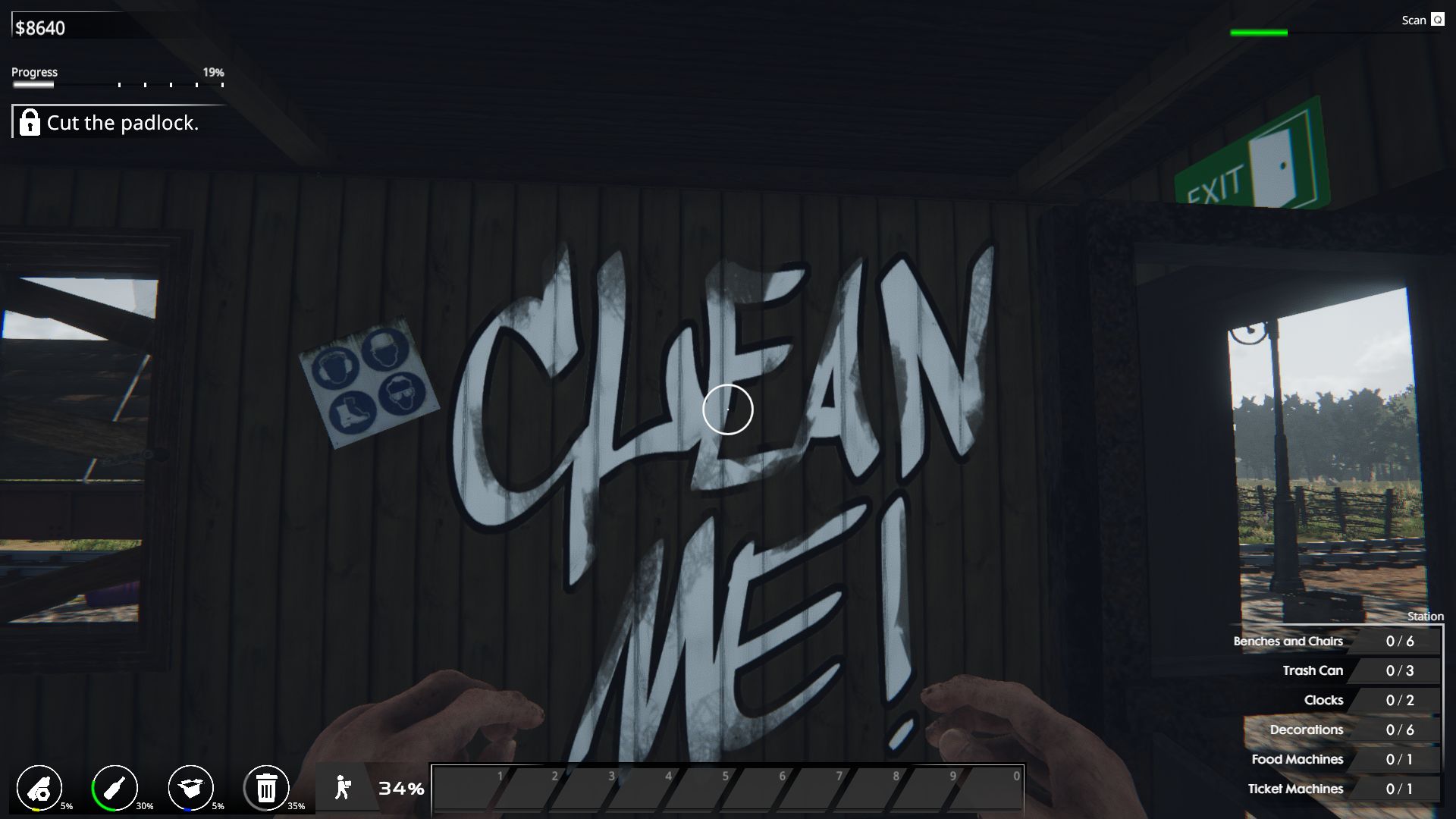 I did leave the large WTF tag on the side of the utility building, though, because it accurately repped the state of mind I was in after playing this game for half an hour. 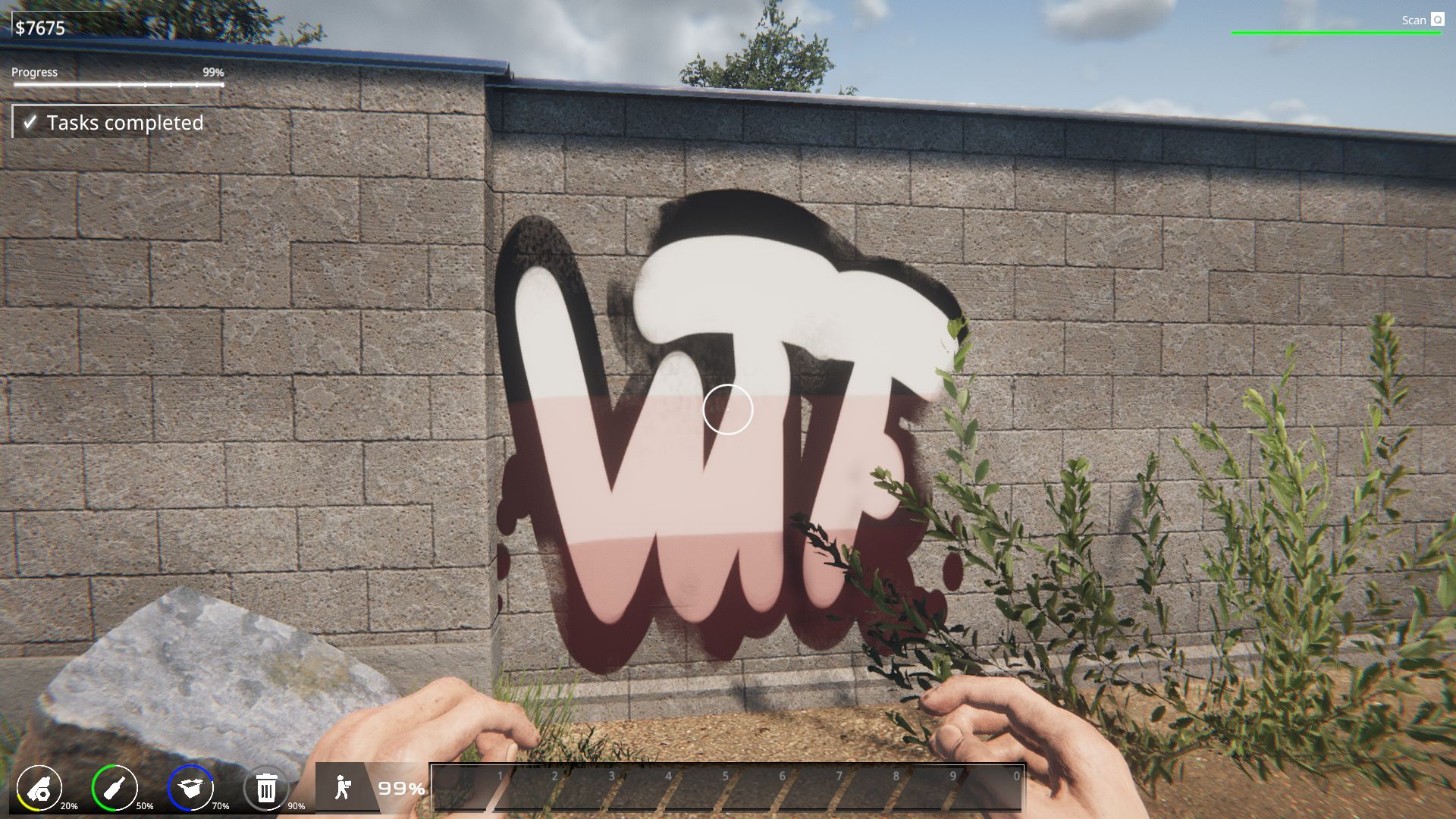 The second station is by the sea, and the building has a bit of a nautical and/or ship theme going on. Thus, I left all the graffiti of sea stuff: an angry octopus, a mermaid with her tits out, a large and beautiful anchor. 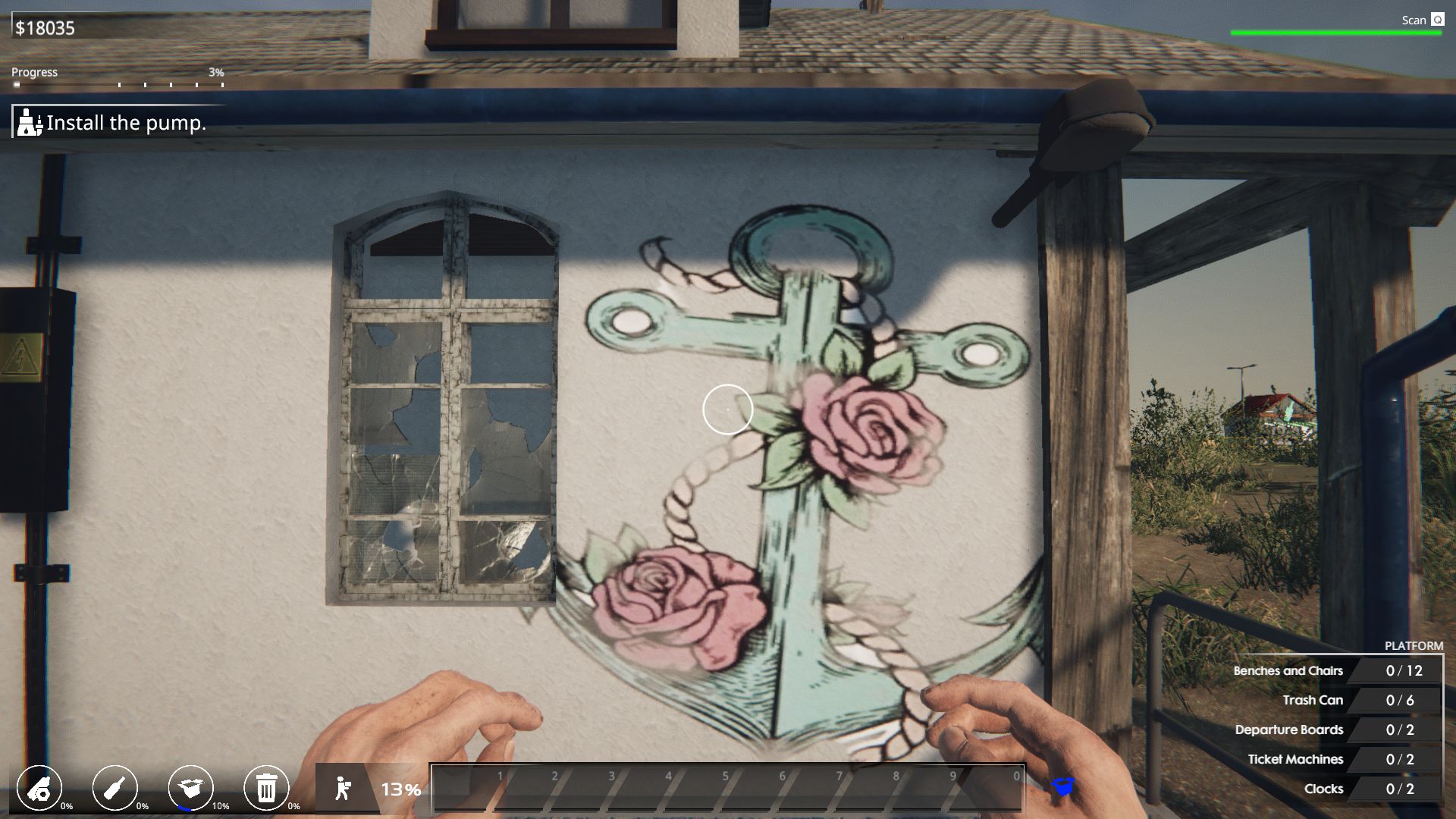 Then there's this very confident bit of fourth wall breaking: 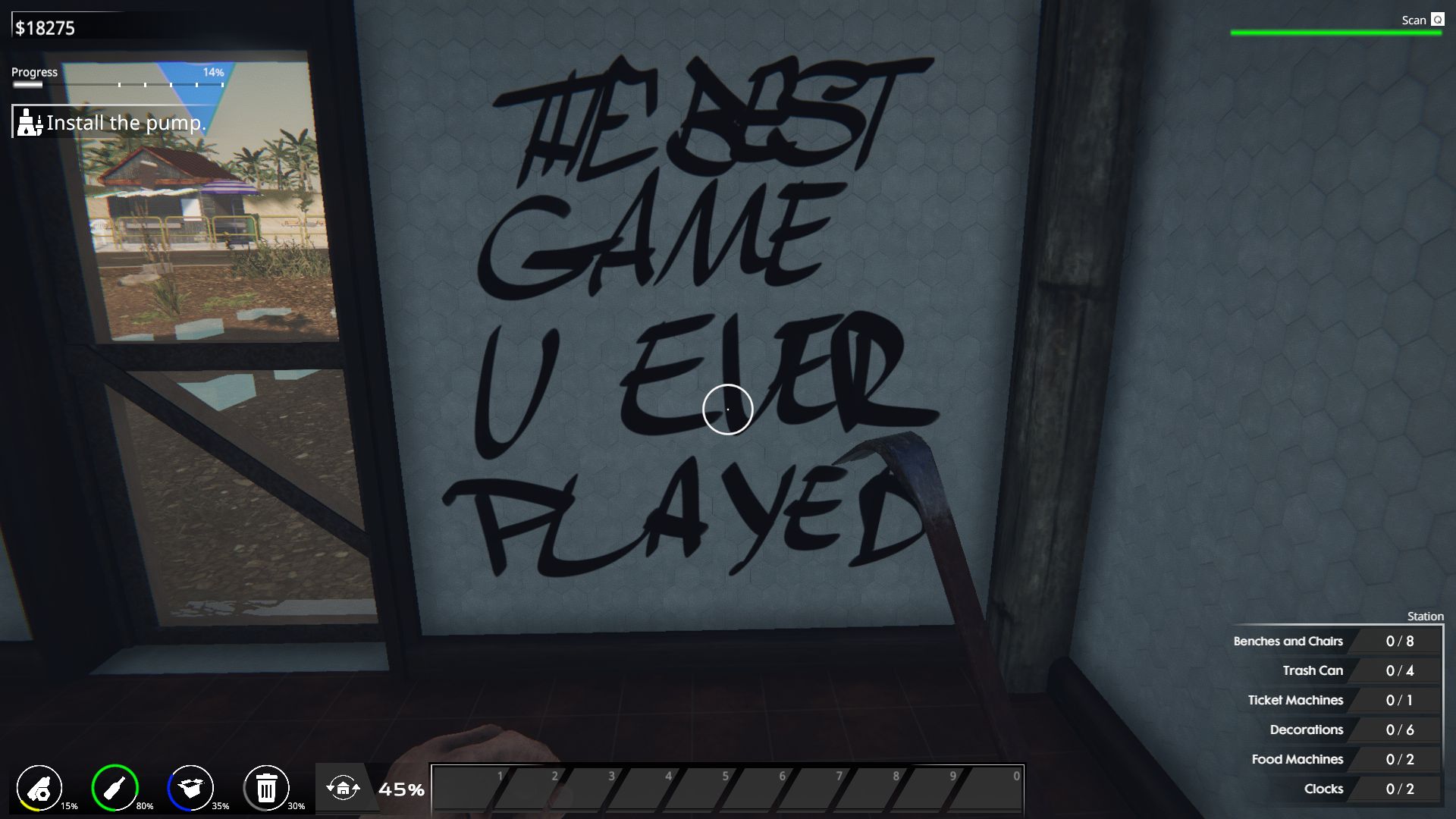 And finally, the cherry on the weirdo cake, the crowning glory, is this absolute fucking masterpice: 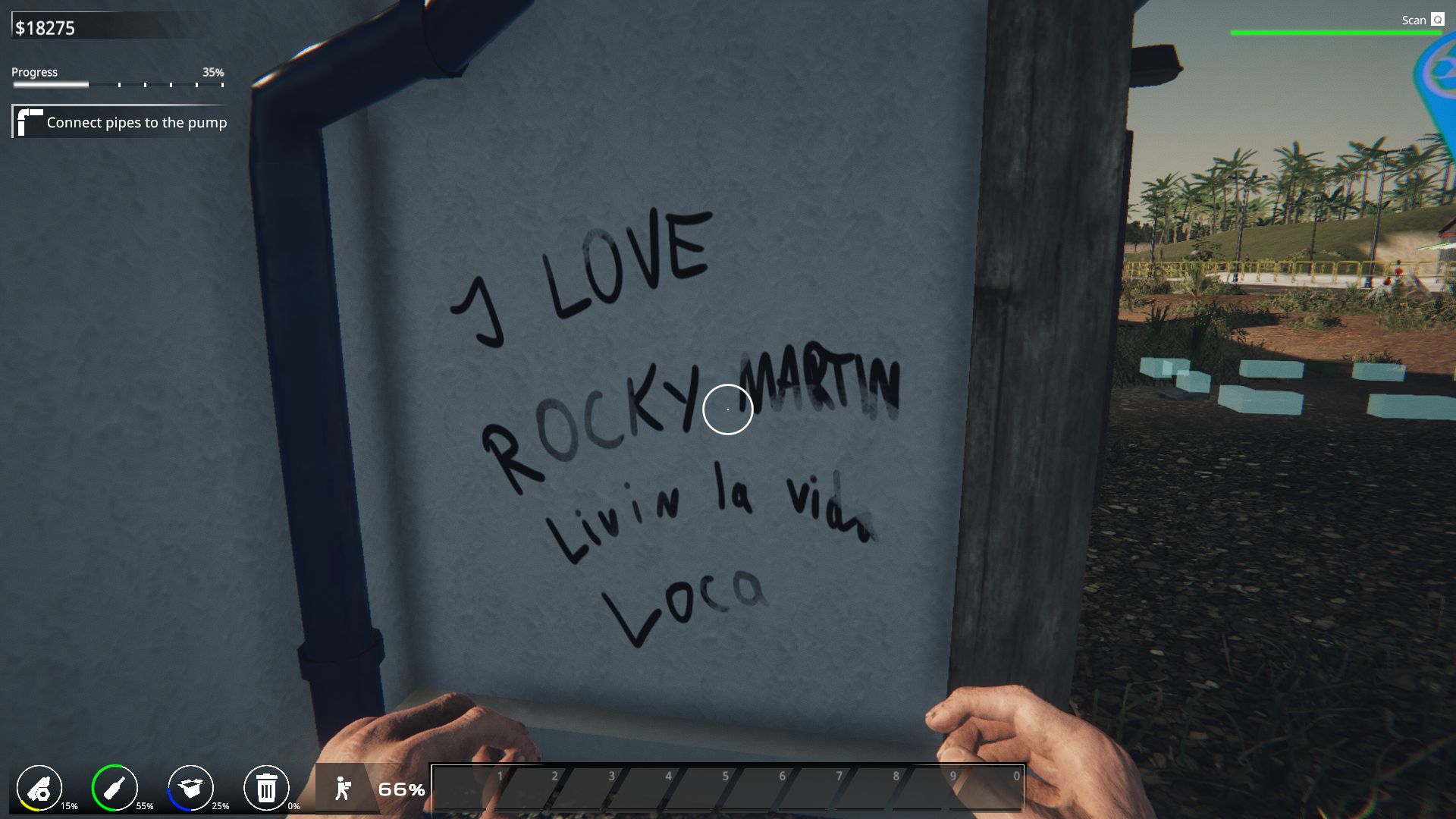 At time of writing, I remain mostly baffled by this game, and consequently am a fan of it.

Train Station Renovation is out in early access, via Steam, from April the 30th. You can demo the first level for free already, though.