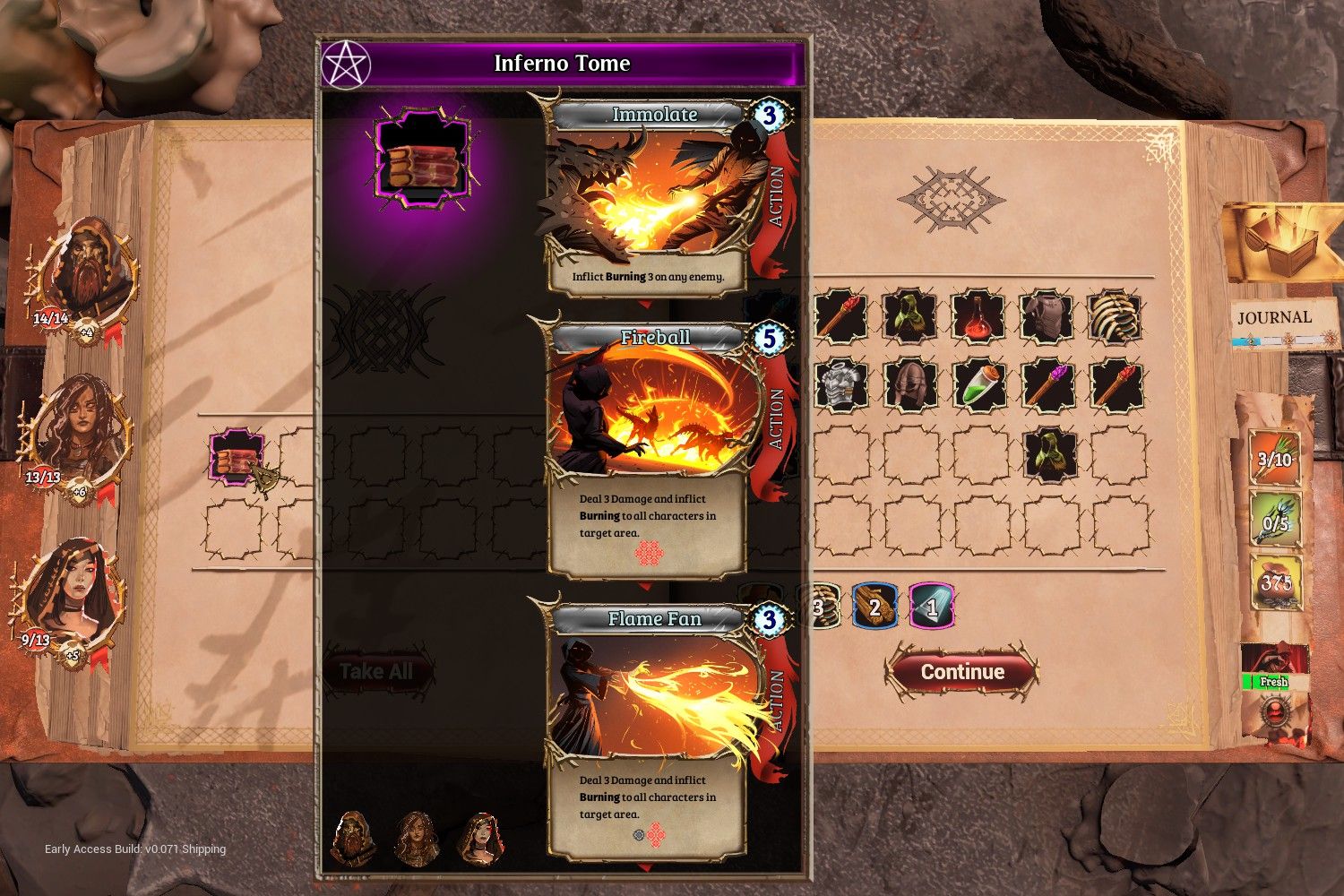 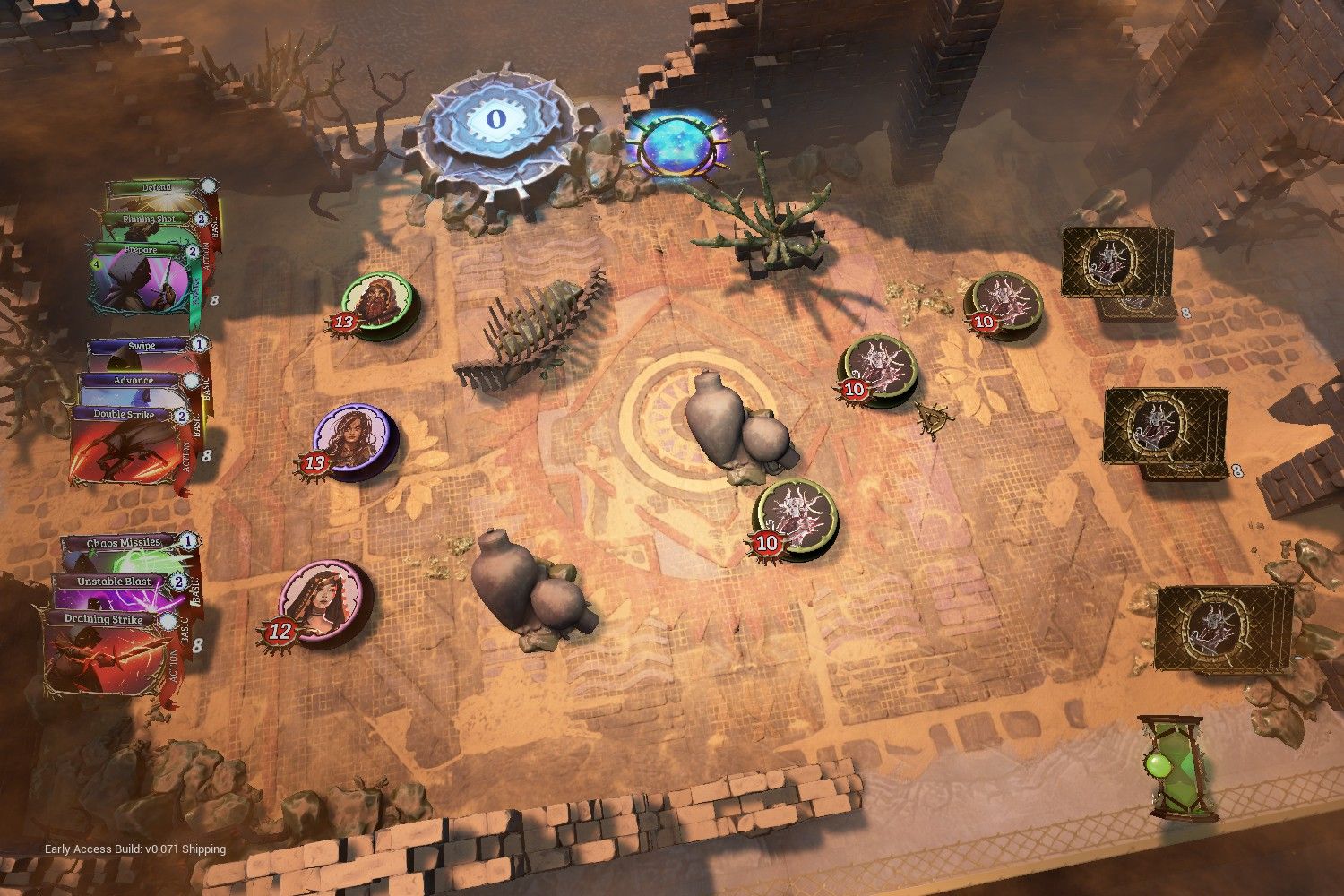 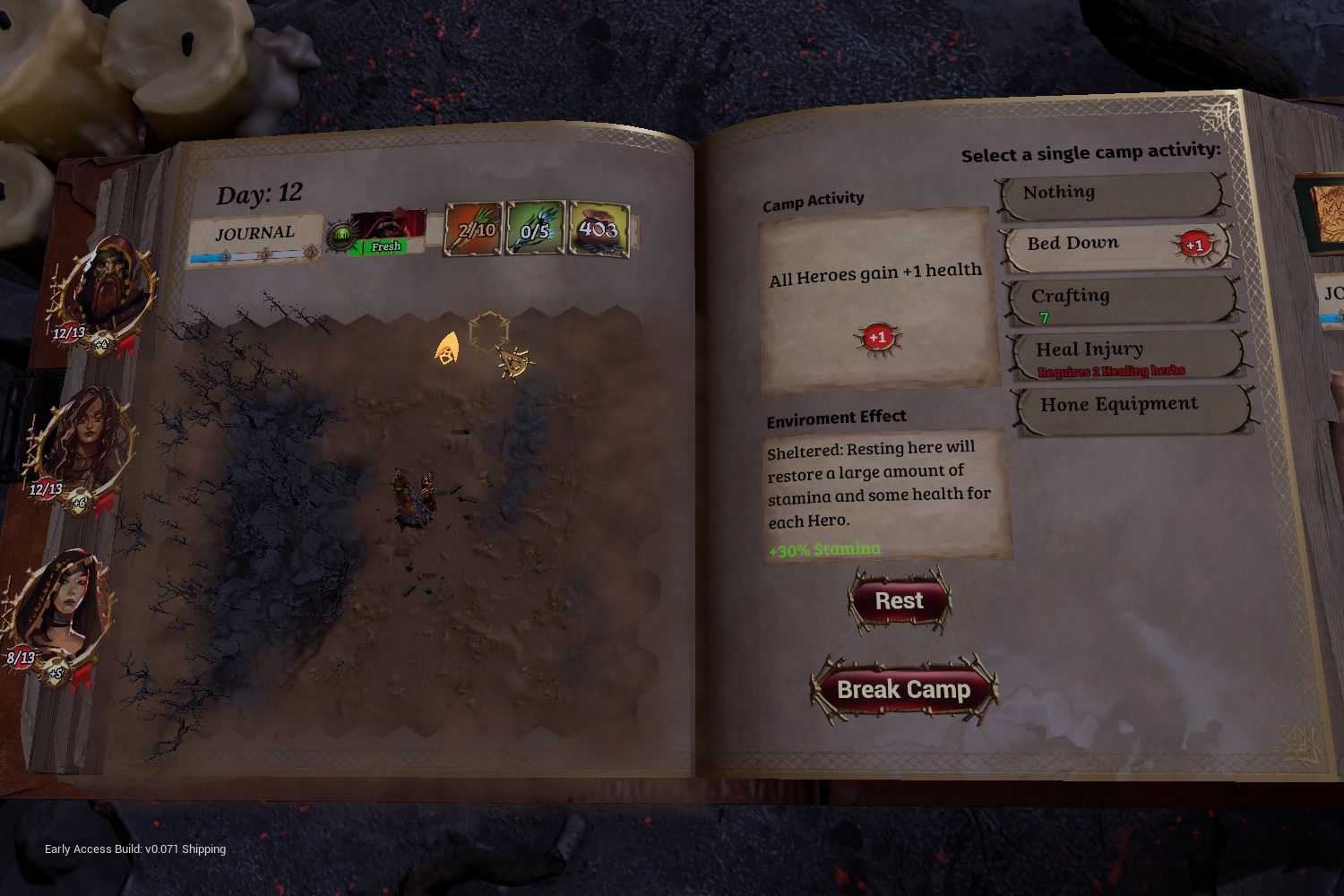 Premature Evaluation is the weekly column in which Steve Hogarty explores the wilds of early access. This week Steve went on a post-apocalyptic deck building quest in Trials Of Fire, but failed to save a servant from stoning.

Release: Out today (early access)
On: Windows
From: Steam
For: TBC

Trials Of Fire, besides having such a generic sounding title that you forget it every time you’re not looking directly at the words, is a turn-based, single-player, deck-building, choice-driven, procedurally-generated, top-down, role-playing strategy game, set in a post-cataclysmic, dark fantasy world. It’s part The Road, part Tolkien offcuts, as you guide a miserable band of fighters through a blasted wasteland in search of a series of Emerald MacGuffins that will reignite a fallen civilisation and bring balance to the something something.

Familiar questing tropes aside, this is really good. The world is presented as a thick ledger, a beefy tome of a storybook that when cracked open reveals the landscapes and battlefields on which your little dudes do all of their adventuring and scrapping. Pencil sketches extrude themselves into stone arches and crumbling ruins, rising out from the page like a psychedelic pop-up book. Inventory and equipment screens are found by leafing back and forth through bookmarks and tabs. The unwavering dedication to this nested reality perspective is impressive, and from the title screen to the moment you quit back to the desktop, the game never pulls away from the vantage point of standing above a book about the time three people went on a big walk and got into a bunch of fights with rat people. 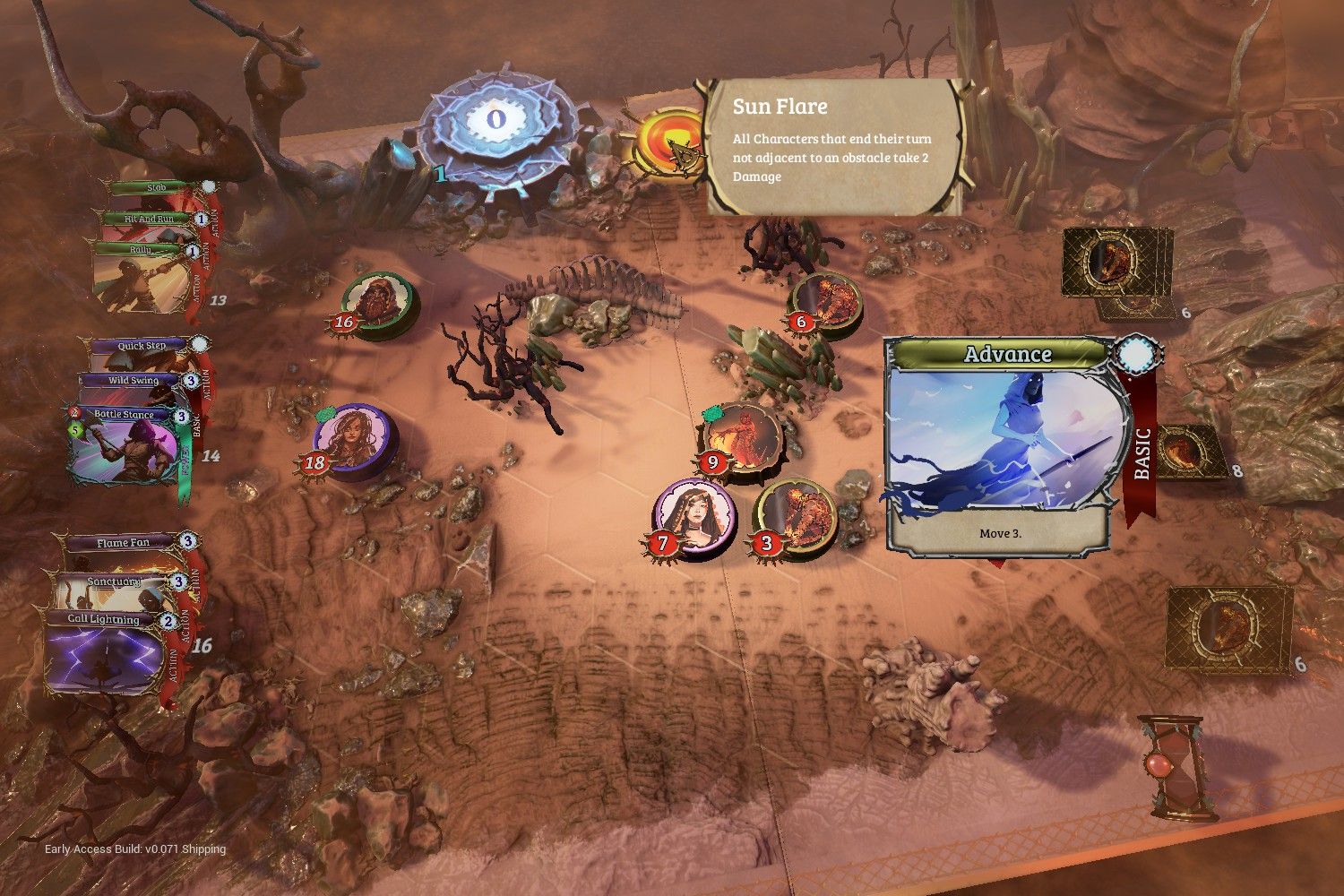 This is a deck-building thing, which means that fights shake out by playing cards from your hand that enable you to move, attack, cast spells and buff your boys and girls. The battles are arranged like hexagonal chess games, your fighters represented by chunky counters that can be moved around the playing area either by activating movement cards, or by discarding cards to give you the willpower needed to get around the board. Each fighter draws three cards from their personal decks at the beginning of each turn, each with varying willpower costs associated with playing them, and it’s up to you – the reader – to decide which cards are discarded for willpower, so that others can be played.

Cannibalising your drawn cards to feed your team is a strategic balancing act that prompts you to think tactically and to consider your next few moves in advance, as the limited supply of willpower is shared among your three fighters. By way of example: you’ve got an archer, whose basic deck includes cards that will boost his ranged damage if played before an attack. So if mister archer man were to draw the card that lets him take a couple of steps before attacking with plus one damage, alongside a card that lets him fire an immobilising shot, you’d likely want to sacrifice a couple of your sorceress’s spell cards to let him realise his ambition of moving and attacking in the same turn. Similarly, your wizarding sorceress can pop off a powerful and expensive magic fireball attack that pretty much requires that the rest of your team stands perfectly still and watches. Your third fighter is a warrior, whose deck is jam packed with spicy melee attacks, and needs to navigate herself to enemy-adjacent tiles to do any good. 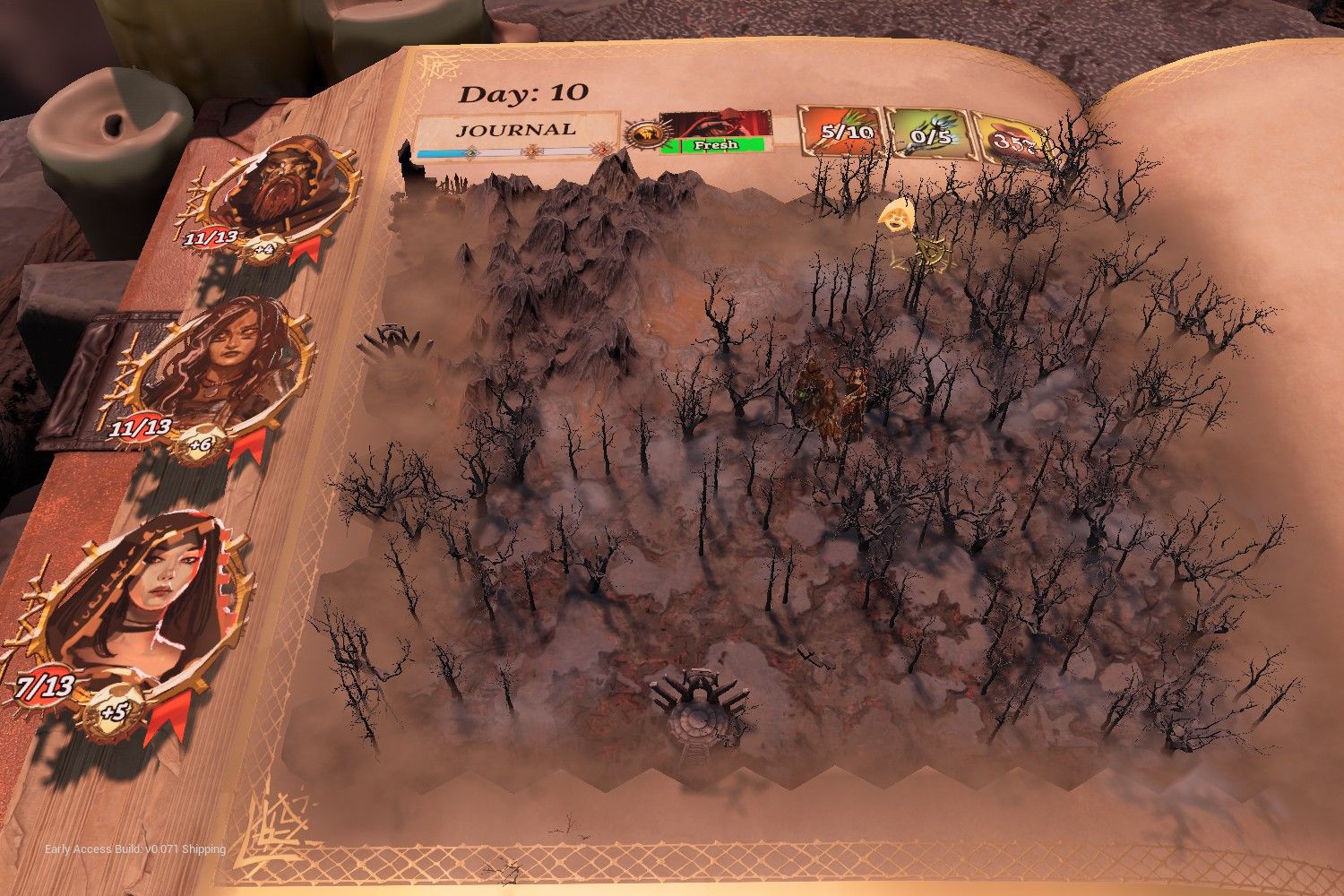 Your deck evolves as your fighters level up, with the option to swap out old cards for new ones, and decks remain small enough to stay manageable for even the most dim-witted of card strategist. Everyone’s got two movement cards, for example, so when presented with the opportunity to add a new card that say, moves four spaces and adds two points to your defence stat, it’s pretty obvious which card you should replace to keep a balanced deck. Or, if you’d like to tune a fighter to be a little more agile, you could stack their deck with more movement cards to ensure they have more opportunities to draw them.

On top of that basic set, any weapons, accessories and armour you equip will add one or more cards to your deck. This is the meat and veg of the deck-building exercise, and higher grade weapons will often come with downsides that have to be mitigated by adding some balancing cards into the mix. My archer found a fancy Met Gala robe that turned him into a willpower-generating engine, but doubled any damage he took from baddies. By slipping a few defence-boosting cards into the deck, I turned him into a sort of armoured cheerleader, whose job it was to hide in the bushes and shout encouraging things at his teammates. 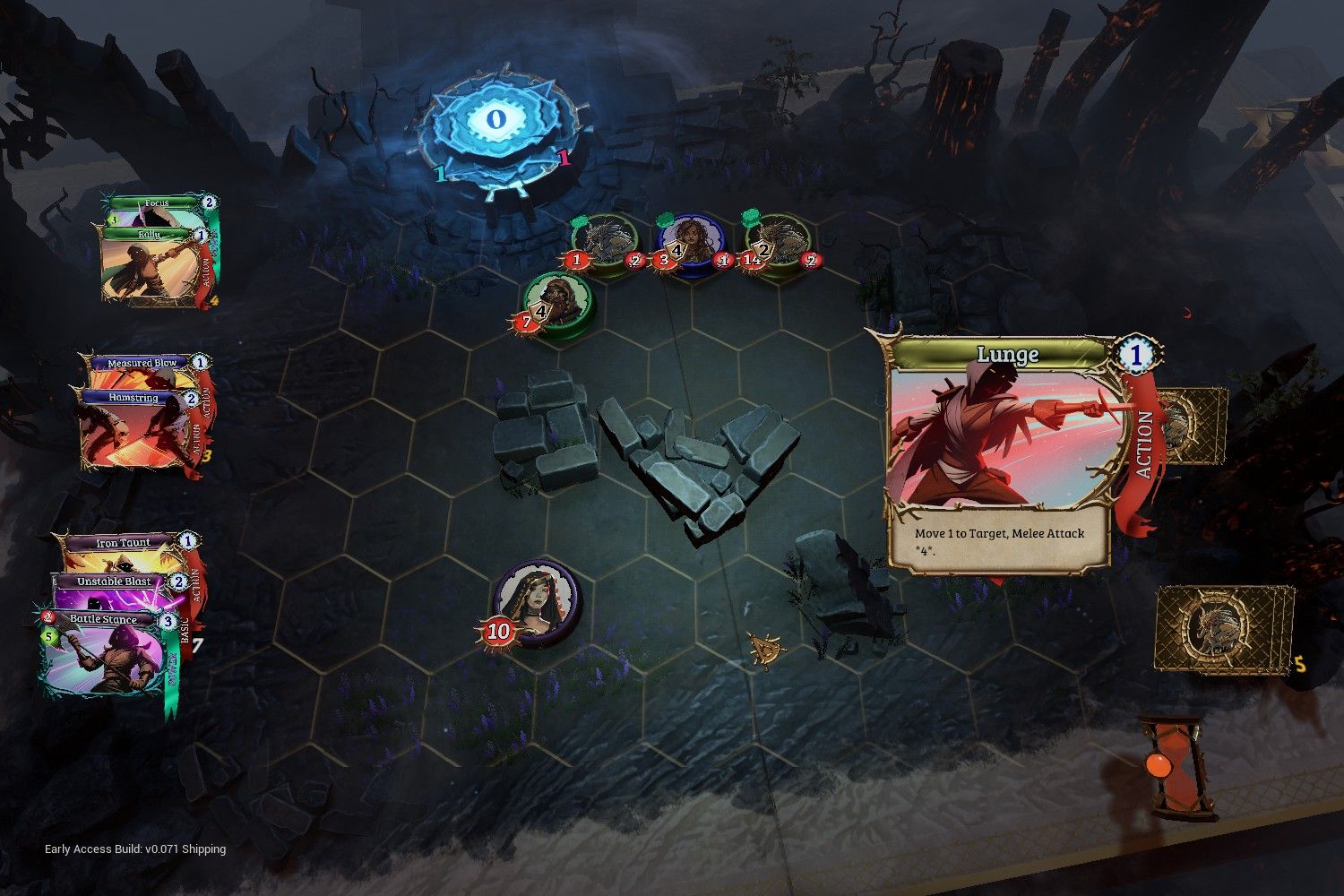 That’s the card fighty bit. On top of all that there’s the overworld, another tile-based map across which your crew must adventure in search of their precious orbs or whatever. There’s permadeath and a survival element to contend with here, as your food supplies are constantly dwindling and must be topped up by landing on glowing event tiles, which present you with a few paragraphs of story and some moral choices to fret about, usually ending in combat. Go hungry or fall off a cliff, and the game starts feeding useless fatigue and injury cards into your deck, tripping you up in battles until you can make camp and rest.

This part of the game is a wall to wall miseryfest, the kind of unrelenting bleakness that would make Cormac McCarthy himself wince, with diseased caravans of emaciated refugees dragging their dying children across the wasteland in search of water, or rat bandits torturing their prisoners to death in abandoned villages, or a friendly wizard who got crushed under a big rock on his birthday. 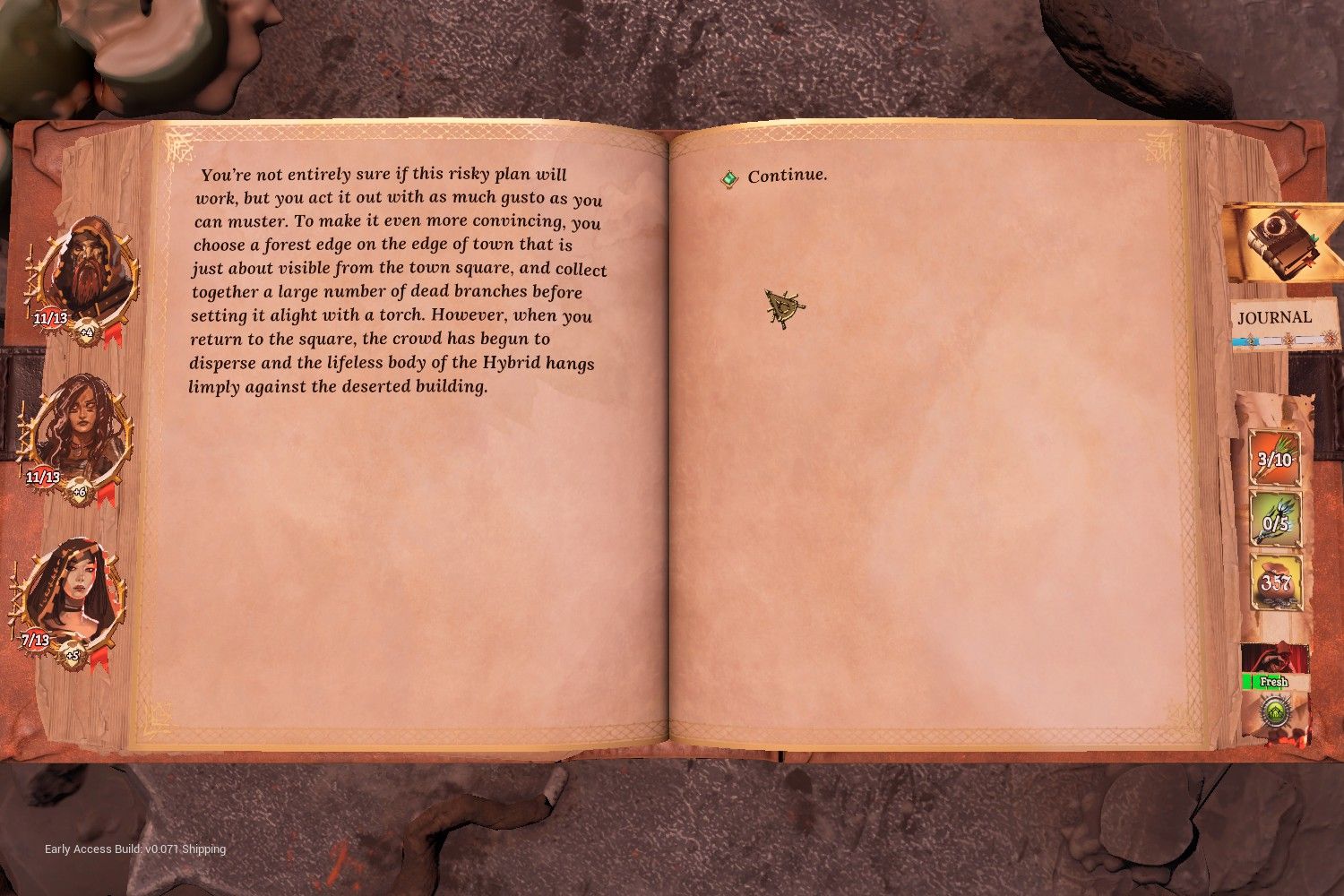 Nothing very nice is happening in Trials Of Fire. On one particularly grim occasion, I was given the option to rescue some unfortunate servant who was about to be stoned to death by an angry mob, by starting a fire in the woods and shouting that a dragon had done it. But by the time I’d created the diversion and returned to the village, confident that my cunning plan would work, the guy had been stoned to absolute ribbons in my absence. Just a big pulpy mess of servant smeared across the town square. No card in the world could piece him back together again.

Trials Of Fire strikes a refreshingly desolate tone in its storytelling, and nudges you towards selfish actions, or at least non-interventionist ones, especially once your resources run low and your empty stomach and broken legs start to poison your deck with fatigue cards. If the knife-edge, house of cards survivalism of roguelikes appeals to you, then this deck-building tour of a ruined and unwelcoming fantasy landscape will be right up your morose little alley.