Remember when Twitch Plays Pokemon was all the rage? Imagine that, but Twitch chat isn't playing the game, they're betting on it instead. The Twitch channel FFTBattleground has set up tournaments of AI bots playing Final Fantasy Tactics against one another that viewers can bet fake Gs on.

Final Fantasy Tactics still isn't on PC and though I won't call this the next best thing (there are spiritual successors like Fell Seal: Arbiter's Mark for that) it's still quite neat on its own. Similar to other bot-run channels on Twitch, and specifically modeled after SaltyBet where viewers use fake currency to bet on fighting game matches, there are a ton of chat commands you can use to interact with the tournament.

To start with, you'll have 1000 Gil in your pocket to bet. You'll want to turn that thousand into more by placing bets on a team and earn XP by aligning yourself with a winning group. The command "!allegiance [color]" in chat will let you join one of the eight current teams: Red, Blue, Green, Yellow, etc.

Matches go pretty quickly and can be difficult to follow. Bots don't exactly spend time pondering their next move, so whatever skill or spell each unit uses often pops on and off screen in the game's menu before you've got a chance to read it. I personally haven't played FFT in a minute—by which I mean two decades—so knowing the moves just by visual effect is going to take a bit of relearning. 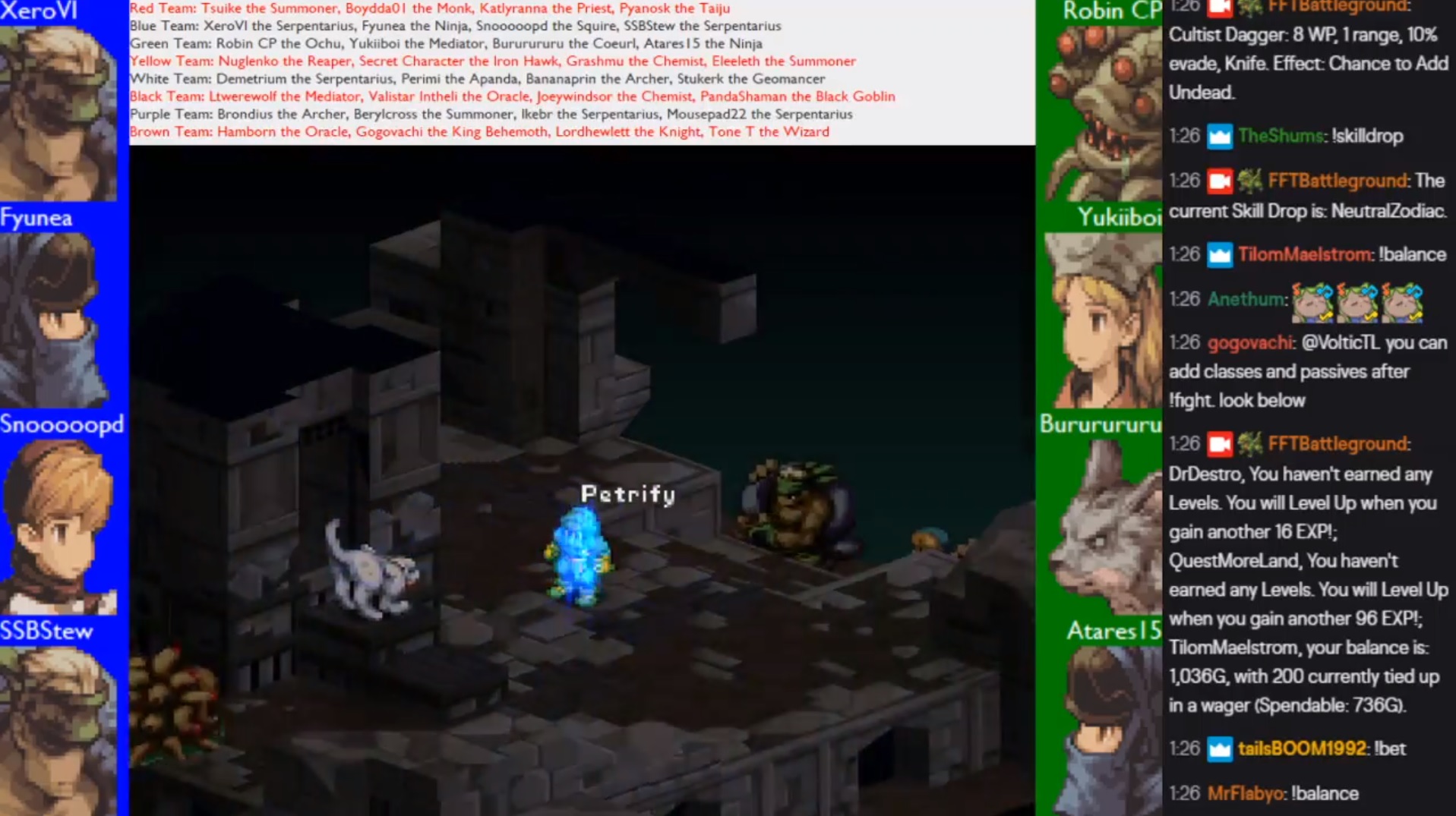 Once you think you've got it all figured out, you can try to grab a spot on screen with the "!fight" command which will give you a chance to have a unit on your team named after you. If your team wins while your doppelganger is fighting, you'll gain extra XP beyond what you earn just by pledging your allegiance. Feel free to use the "!allin" command to bet all your Gil because even if you lose you won't fall beneath 100G, leaving you a chance to build it back up again.

The person running the FFTBattlegrounds channel says that it is still in "early beta" with more ways to spend your won Gil planned for the future. Despite the early rough edges, the siren song of automated matches calls to many. Over 900 people are watching the Blue and Green teams duke it out on the Murond Death City map. At least for now—that will change in just a couple minutes.