Most games that put you into the shoes of the bad guys are about reveling in evil, gleefully causing havoc and destruction like a toddler who's got into the stationary box. Obsidian's RPG Tyranny [official site] is different.

“I find a lot of fiction that centers around good versus evil tends to be unsatisfying, as evil always exists as a strawman for the ill-prepared underdogs to beat up with the power of naïve violence and good intentions,” says Matt MacLean, narrative designer for Tyranny. “I think video games often try too hard to make sure you don’t relate to your victims, and so villains are made unrelentingly villainous, and allies are made into some combination of saccharine hangers-on or tear-jerker red-shirts waiting to be killed in order to shock you into thinking death means serious storytelling.”

But how did it all work out, and what new cruelties will the upcoming expansion expose us to?

In many ways Tyranny begins after the chaos and fire that most evil-centric games depict has died down, and you're left to explore the bent and broken husk of the world lingering in its wake. Tyranny's world is one where everyone has been touched or corrupted by evil, a fantasy dystopia where you play not as one of the downtrodden, but as one of the Overlord's minions wearing boots of +1 oppression. 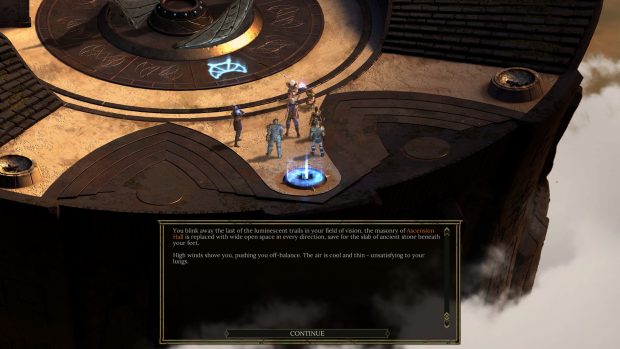 The goal of the game, as MacLean describes it, was “to make sure whatever giant society of evil we created made some sense.” Obsidian wanted to show evil not just in its most gurning and maniacal form, but as a factor of everyday life. Indeed, perhaps the most unique aspect of Tyranny's depiction of evil is how ordinary it often seems.

“Our Overlord needed to have some sort of empire that wasn’t comically sadistic to the point of imploding, so Kyros needed to be equal parts ruthless warlord and stable civilization builder,” MacLean says. “Our regular folk needed to be universally afraid of Kyros and that meant they should be chronically ignorant, as understanding tends to counter fear. Most importantly, the agents of evil that the players meets in the game needed to be a proper mix of revolting and relatable.”

As narrative designer, it was MacLean's job to build the game's story, and to flesh out the world and the characters within it. With such a specific focus, you may think it would be difficult to make the realm of the Tiers and its inhabitants seem varied, but MacLean expalins that writing the characters was one of the easier parts of the job. “Like our own world, everyone in Tyranny needed to be the heroes of their own story, because every ‘evil’ person is a good person going about their righteous day doing their righteous thing, happily preying on something to live,” he says. “Evil isn’t a thing most of us set out to do, it’s more the unintended consequences of learned mistakes.” 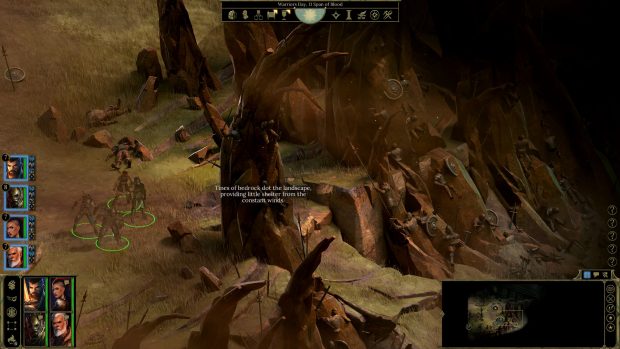 Of course, Tyranny's world includes the more extreme personalities who would prosper in such a society. “It’s easy to write empathetic sociopaths, as the really good sociopaths are charismatic, engaging folk,” MacLean says. Where the project became tougher was in writing the 'good' people who had managed to survive the war, and how the necessities of that survival had altered them. “The game takes place three years into a war, so you don’t meet the weak, the eager, the depressive, or the overly-courageous – they’re all dead. What’s left is a people who, by necessity, had to grow a sense of humor, humility, and streetwise to live to the present day.”

The biggest challenge stemmed not from creating the characters who populated the world, but from combining the typical mechanics of an RPG, particularly the branching narrative, with the world that Obsidian wanted to build. “It’s hard to make a world that is convincingly ‘locked down’ by the rule of some allegedly awesome super-evil, that provides you with lots of choice and yet never has you instantly executed for treason/heresy/breaking some sort of law,” MacLean says.

Obsidian solved this by establishing the player at the higher-end of of the game's social hierarchy, although still a few rungs from the very top. This is an unusual choice for an RPG, which tend to throw the player at the bottom of the lowest pit in order to give them something to climb out of, but as MacLean points out: “This let us have a world of corrupt laws, albeit one that the player is immune to and can perhaps leverage for fun, profit, or maybe nobility.” 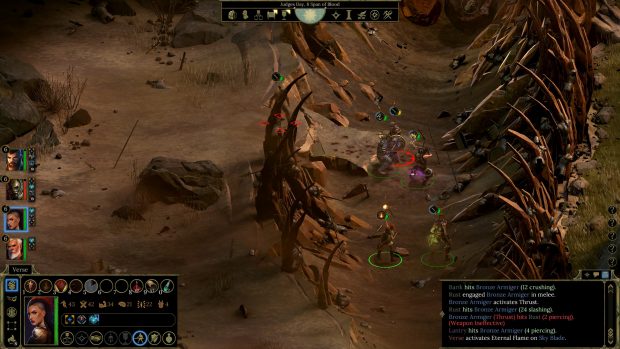 Another problem that Obsidian needed to solve was – in a society where evil has already won, how do you then give the player something to do? The solution here was to turn the knives inwards, to have the fighting shift into infighting as thoughts began to turn away from final victory, and more toward who would reap the most spoils. But this led to another issue; the need to contextualise the maelstrom of inter-factional politics that the player was about to be thrown into.

The result of this was the Conquest mode, a text adventure that takes place before the game begins proper, which provides an overview of how the war played out, and let's the player make a few choices that influence how various factions perceive them as the game begins. Interestingly, Conquest mode was one area of Tyranny that proved difficult to build, and one that MacLean worried, “for the length of development”, would go down badly with players.

“An earlier version of the conquest paired attribute and skill gains to the conquest, and a part of me really enjoyed how the past-defines-your-training vibe meshed with the game’s learn-by-doing system. But it was a level of complexity too far. Players would find themselves not wanting to select things because the story was good but the systemic gains weren’t,” he says. 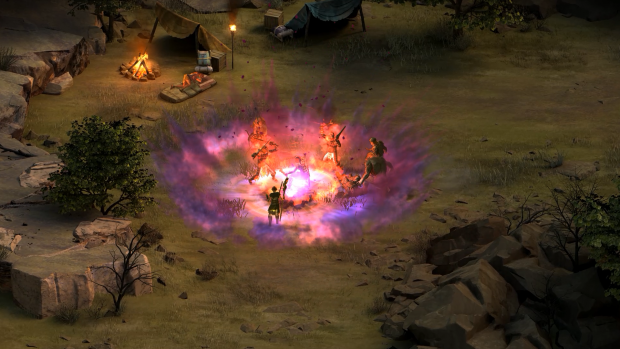 Although MacLean feels Conquest mode was ultimately successful. One issue that the team didn't fully solve was blending the focus on evil with the epic fantasy story that is generally expected of an isometric RPG. MacLean states the team “wanted the players' choices to matter”. But this meant creating a huge amount of content that could only be explored fully with multiple play-throughs, and MacLean admits that “not many gamers have the time for that much gaming.”

“While I love making choice-driven games with branching dialogue, 'Next time, a linear game' was a frequent mantra uttered when we found ourselves having to make short conversations many thousands of words long just to accommodate prior choice and conditions,” he adds.

Nevertheless, Obsidian has decided to further explore the world of Tyranny with an expansion - colourfully named Bastard's Wound. For the DLC, Obsidian wanted to create something that would be of interest to Tyranny players both old and new. “The parameters for the DLC’s design were something that players not yet finished with the game could play, so that gave us the opportunity to add something we just never got around to making – an area accessible in Act 2 that you travel to on your own schedule and not based on exactly where the main story is pointing you next,” MacLean says. 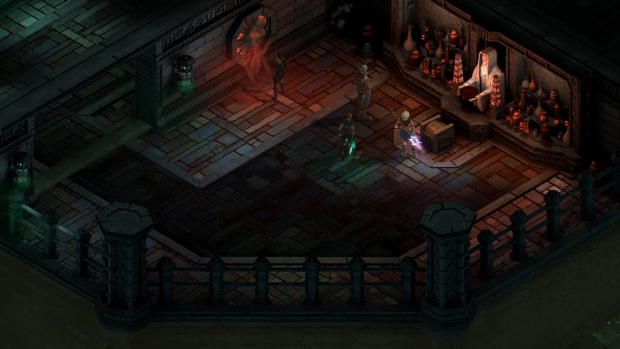 The developers are tight-lipped on details of Bastard's Wound story, although MacLean does say that the expansion is “less about the immediate conflict of the Disfavored versus the Scarlet Chorus and more about the ripples and consequences of the larger war.” But the expansion will add character-specific quests for three members of the player's party, namely Barik, Lantry and Verse.

This is an aspect that the vanilla game was lacking, that more personal connection between your character and your party. However, these quests will be unrelated to the game's core reputation system: “if we had placed something like loyalty or fear requirement for one of these quests, and you fire up a save game where you’ve already opted for the other thing and there’s no more conversation/game left to steer your way into the quests, you’d be rightly annoyed.”

Bastard's Wound will also address some of the more general complaints about the vanilla game, one of which was an overemphasis on combat. “While adding a strictly pacifistic route through things wasn’t quite in keeping with the general vibe of Tyranny, Bastard’s Wound features quests with more optional violence,” In addition, Obsidian wanted to ensure that, when violence does happen in Bastard's Wound, it's better contextualised than it sometimes was in Tyranny. “We also wanted to have less situations where someone already hated you from prior events, bridges seemed pre-burned, and combat was inevitable,” he says. 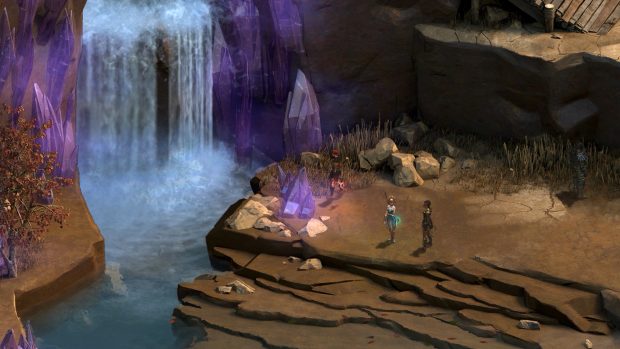 It's also worth noting that, alongside Bastard's Wound, Obsidian will be making some tweaks to the vanilla game that will be available to everyone. “We’re doing a free update to the base game that adds and modifies a few things here and there,” MacLean says. This includes new voice-overs to parts of the game that were previously text-only, and the fixing of certain story “bugs” by adding new dialogues and conversations. “In short, we've been working on a lot of cool improvements that all players will be getting, not just those who get the DLC.”