Underworld Ascendant is a game for anyone who has ever tormented a GM during a tabletop RPG session. The maps have been drawn up, the traps have been primed and all of the plans are coming together. You're deep in a dungeon and the story is about to take a very unpleasant turn. And then...

“You said the spikey pillars are made of the same wood from which the ancient throne of Catharsia was carved? Fine. I'll set fire to them.”

“You can't do that...there are another six distinct phases of this particular peril...”

The 'Ultima' branding may be gone but Ascendant is as close to being a true Ultima Underworld sequel as we're ever likely to see. It has the same recipe of Dungeons and Dragons concepts mixed with immersive sim qualities, and sees some Underworld and Looking Glass alumni reunited at OtherSide Entertainment. The studio is also working on a System Shock sequel and before watching a live playthrough of Ascendant, I was keeping my excitement in check. 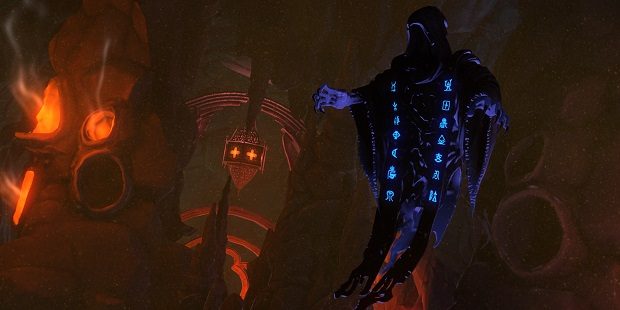 Original Underworld designer Paul Neurath and Warren Spector are among those veterans working on the game, and I wanted to see evidence that they had new ideas for this dungeon crawl rather than simply a desire to reheat old ones. In the livestream and during a Q&A afterwards, they showed plenty of evidence that Ascendant will be looking forward as well as back, and using modern tech to revitalise some old tricks.

On the surface, it's tempting to call it Prey: D&D Edition. I'm talking about Arkane's Prey, a game that already has DNA in common with Ultima Underworld and the Looking Glass family of games. There's a similar emphasis on players creating solutions to problems using a variety of tools, and the environments that I saw are designed to enable as many approaches as possible.

One interpretation of that might be the addition of ventilation systems to every dungeon, so that you can crawl through spaces unseen rather than taking guards on with your weapons and magic, but Ascendant is more inventive than that. There are various magical plants, from which seeds can be plucked. The most notable is a sort of glue plant that allows you to stick objects to walls or ceilings. It's a hybrid of Thief's rope arrows and Prey's goo gun, and I enjoyed seeing steps and bridges constructed using objects that had previously seemed like background trash.

This is a game in which you can levitate a crate, move it through a fire with your mind, and then lob it over a skeleton's shoulder-bone so that it crashes into a wooden support behind that skeleton and starts a larger fire that results in collapsing struts, falling boulders, and a dog's delight of shattered bones to chew on.

It's also a game in which a tester discovered that spinning blade traps can be rendered inert if you lodge something in the mechanism. That's because traps are actual physics-driven objects rather than simply being kill-boxes surrounding an animation. It's also a prime example of what I see as the central appeal of Ascendant: screwing with the creators of the game. 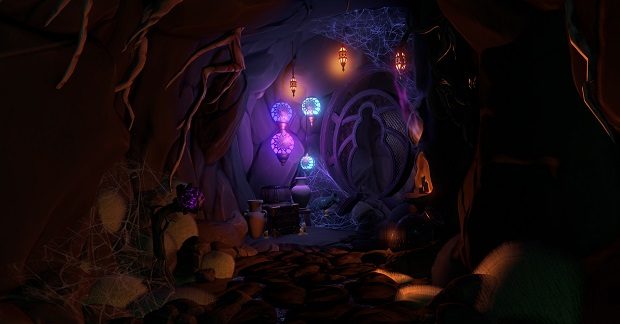 Don't worry. They want you to break things in interesting ways, so it's not as if anyone's going to be offended if you spend your time trying to stack monsters on top of one another and then pushing them into a ditch. All of the experimentation might be directed toward finding solutions to problems, because there are plenty of monsters to kill and quests to undertake, but I got the distinct impression that messing around with the physics and AI will be encouraged for its own sake.

It's an RPG that's about play rather than steadily rising numbers. I'm sure there's a plot but what I've seen so far suggests that making my own sub-plots with titles like “Do skeletons burn?” and “The man who was glued to a boulder” will provide plenty of entertainment. The one thing I'd like to see more of is the ecosystem of monsters and factions; everything in the livestream was player-driven to an extent, and I want to know how well the game's systems intertwine when hostile creatures encounter one another.

Ascendant is very appealing already though. There appear to be some rough edges, particularly relating to stealth which seemed a little too mechanical at times as the player character lingered just outside detection ranges in a way that made the connective tissue and triggers of the world seem just a little too obvious. That might change though, as this isn't a finished build.

The consequences of actions are at least clear. Even when guards started to swarm across a cavern, ruining what had seemed like a perfect infiltration, the cause was obvious. Create a ruckus and you're going to get unwanted attention.

Fantasy Prey was my initial take and I stand by it, to an extent. The more I watched, the more Ascendant reminded me of another game though. It has something of Divinity: Original Sin about it and I think that the goals of the design might be closer to Larian's than I originally thought.

Both are games that are, in different ways, trying to replicate elements of pen and paper roleplaying. They're doing this by providing players with tools and then using their own systems to react as often and as convincingly as possible to the actions undertaken with those tools. In Underworld that's in the physics of the world and the AI, and so much will depend on how well the latter works, and how well constructed the various areas of the world are.

As a basis, it's fascinating though. An RPG that drops you into a space and gives you freedom to explore and engage with the inhabitants with as few restrictions as possible. It's what I want from an RPG, that sort of freedom. It's not the freedom of an open world, it's freedom of approach within a world that has obvious hard limits.

Ascendant has a clear ruleset and it wants you to test how far you can push those rules. I look forward to breaking it.