Healthy eating is for suckers. Here we are, at the height of a long overdue spring, and everyone here has a persistent cold. In May, no less. I've even been going outside, and just last night I ate a vegetable. Well, there'll be no more of that. Instead, a steady diet of Unknown Pleasures will surely cure all ills.

Humanity has something something apocalypse, something probably nuclear I think, something thing noise words and now confined to living in orbit around Earth. Okay great, now we step in, and it's our job to build a little settlement across a handful of small but extremely tall icy pillars towering over the toxic planet.

Cliff Empire is both like and unlike other city builder games. You plonk down a storage area and little drones start flitting about delivering resources to help build, keep your little people (a mere number, here, but an important one) going, and turn ore into manufactured goods to be sold to a big cargo ship that warps in on a cool little stargate you also built (you did build one, right? Oh dear). Resources don't seem to be fixed, but are extracted and processed at a steady rate depending on how many farms, fisheries, factories etc you have.

Once things are stable you can expand to other pillars, but you also need to keep the environment in mind. It may already be an icy wasteland but it could get even worse, and we did kind of ruin it once already.

I love the stark aesthetic, with the near-monochrome settlements all crisp and clean in the foreground, the enormous and pretty scenic views out of focus, and the pace is pleasant and relaxing. I particularly dig the very dark nights coupled with the option to make the cursor an enormously powerful spotlight. FEAR ME, LACKEYS. I SEE ALL.

El Tango de la Muerte (Spanish for "everyone knows that Sin, come on") is a rhythm action game, but a surprisingly unique one. It works a little differently to most, as instead of hitting notes or moving particular parts of your body, you're pressing directional buttons to move about the dancefloor. This is the tango, after all, and consequently emphasises the dramatic movement and use of space, some deceptively tricky irregular beats, oh and sometimes instead of dancing you're fighting to music, and if you miss too many steps you'll get shivved.

For you see, it has a story too. And a jolly fun one, set in 1920s Buenos Aires, with all the melodrama you might expect. The art is reminiscent of the Canadians from South Park, with cut-out characters scuttling oddly about and tilting when they talk, which works well with the movement during the dances.

It's rather short, but it's a good laugh, the music's great, and when else are you gonna play a game set in Argentina, let alone a period drama? I stumbled a fair bit with some of the sliding moves as getting the exact distance/timing never quite clicked, but I probably just need more practice.

An absolutely gorgeous puzzle game about a nameless, voiceless Hero who casts aside his bloody sword and takes up a pen. As his whole world is drawn in ink, he can use the pen to create simple shapes that help him solve puzzles and retrieve his prized stamp collec... sorry, his girlfriend.

If you're on a coal-fired laptop you might think this is ideal simple fodder that'll run on anything, however! Inked is a story within a story, whose artist will periodically look away from the story to his room, neglected after some kind of emotionally devastating experience that he's obviously using his art to work through. There's a lot of anger there and it's not yet clear how healthily the game will resolve that, but I was very intrigued. It helps that the puzzles are, well, fine. They're not particularly difficult (a plus for me, and anyone else who tends to respond to getting stuck by just playing something else), but they're paced alright, and though it might seem shallow, the understated music and very attractive art are a reward in themselves.

Monster Prom (American for "end of year dance taken far too seriously") could have gone horribly wrong. I mean, the game, not the concept of a prom full of vampires and ... well. It's a dating sim about picking a monster, then building up your stats and hopefully relationship(s?) with other monsters at school, with the goal of asking one to the prom. Or you can choose to go on your own, regardless of whether anyone is interested.

It's a very hip sort of game, full of lighthearted references to feminism and politics and modern internet culture, which is where some games fall flat on their face, but Monster Prom handles it all with such a light comedic touch that it does exactly what it sets out to do. It's silly and over the top but never smug, performative, or self righteous, and it made me chuckle regularly. There's even, I think uniquely, a multiplayer mode, where you and the up to three friends that I too definitely have can go a woo-in' all at once. Sadly I have not tried this, because my many friends are intimidated by my extreme charm. [Alyse Stanley played the multiplayer mode for her full Monster Prom review, which went up earlier this evening. -Ed]

Put it this way: On my first go I ended up the Flame Princess-esque lover and consigliere to an ambitious, moderately evil gorgon who, with my support, also became a powerful crime lord. This is everything I have ever dreamed of.

Another quick parental note: though not gratuitous, it is very sweary. 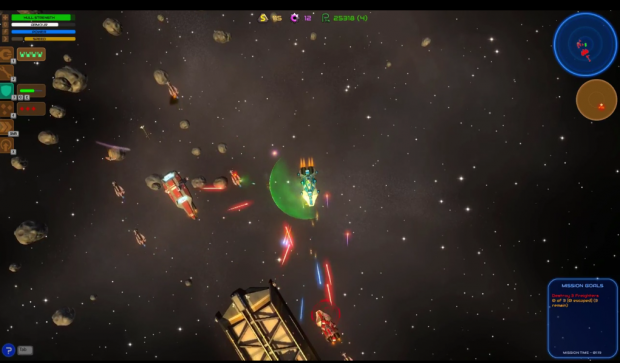 Space Battlecruiser (English for "stop this") is a shooter about a battlecruiser in space. Probably, anyway - who really knows the difference between a frigate, cruiser, destroyer and all that? Nobody, that's who.

In contrast to the typical fighter, your ship is a big, lumbering old thing, too slow to reliably dodge many attacks, but chunky enough to shrug off a hail of fire as long as you patch up now and then. And of course, you have some damn big guns.

This isn't the full on capital ship combat sim we've all wanted since the last serious attempt, but it's a great middle ground between the zippy little blaster and ponderous titan styles of spacefight. You're slow but can still dodge a bit, vulnerable but can take a pasting if you're careful, powerful but not overwhelming. The constant low thrum of your humble flak cannons, the middling but handy lasers, the welcome challenge of timing and aiming your artillery just where a foe will turn into it. It's satisfying stuff, even if it is a tad easy.

The effects are solid, and there's room for a little tactical variation - I tend to favour timid sniping but am not averse to ploughing into a reckless melee, where multiple sources of damage can really mess you up, but those beautiful point blank broadsides make it all worthwhile.

There's a strategy layer too, as you salvage ... salvage from wrecks and spend it on upgrades and new weapons, and choose specific sectors to attack in order to disrupt and weaken an enemy war economy. Fairly lightweight, but that's all the structure it really needs.

This has been another very close contest - you won't go far wrong with anything here - but ultimately the only reason I had for not making Monster Prom Pick of the Week is that it's interactive fiction yet again. But here it is. 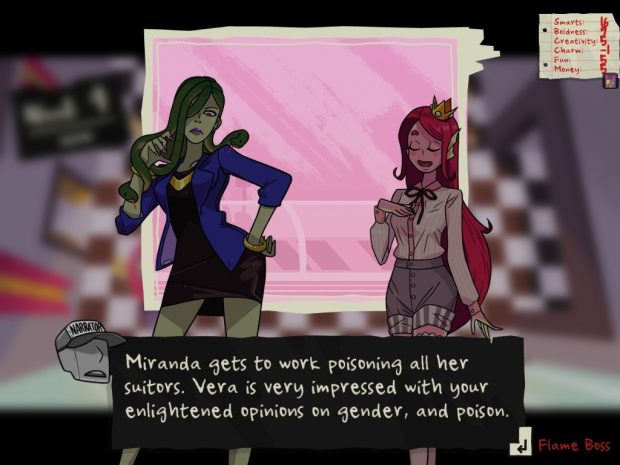 Call me predictable, it's fine. But when a dating sim makes jokes about dating sims and they're actually funny instead of agonising, somebody did their job right. "Dating sim" is arguably a misnomer if anything, it's really all a vehicle for fun dialogue rather than the usual overwrought story crossed with a sex pest encouragement programme.

Now, if you'll excuse me, I need to get working on the next batch of games, and a massive bowl of chips.