High school is already a nightmare without having to woo literal demon spawn, but multiplayer dating sim Monster Prom makes you want to relive the experience over and over. At times obtuse, at times hilarious, this is an education in monster romanticism. But you may not learn the same lessons as my friends and I, because its real strength lies in how varied each playthrough can be.

It follows typical dating sim logic: There are only three weeks left until prom, and you have to make the monster of your dreams swoon for you, or risk going stag to Spooky High School’s biggest shindig of the year. You have the choice of six suitors, from your typical werewolf and mermaid princess to a hipster vampire Instaphile and an undead thrill-seeker high on ecto-cocaine and constantly Yaaas-ing. 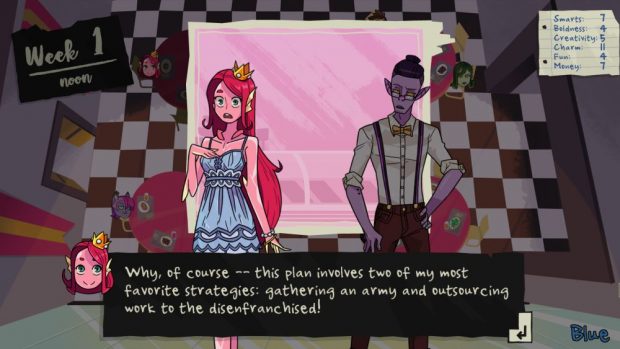 The characters designed by developer Beautiful Glitch each check a box for certain high school tropes, but modern twists keep them feeling fresh, like how the otherwise stone-cold gorgon resorts to tsundere when flustered. Voicing by famous anime voice actors like Cristina Vee and Youtube stars like Arin Hanson and Cryaotic give the characters a believability despite Monster Prom’s few spoken lines. And Arthur Tien’s lovely art only further piles on the personality.

Playthroughs last between 30 and 120 minutes depending on the number of players and whether you choose to play a shortened version or the full experience, a flexibility that proved valuable when trying to corral my friends into sitting down to play a dating sim. Players pick from one of four avatars, naming them and choosing gender pronouns that have no effect on who you can date. My team went with SpoopyGal, MrGame&Watch, Creamkid, and Ichigo. There’s also online multiplayer if your gang’s a little less local. 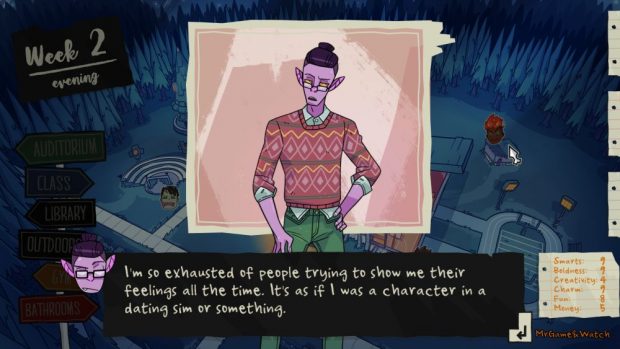 To begin, a personality quiz from a teen magazine applies its “PH.D. in bullshit” to figure out your kinks (a.k.a your stats) and which suitor you’re destined to bump into for the rest of the game. It feels a bit unfair to determine your love interest so early in the game before you’ve even had a chance to interact with anyone, but Monster Prom seems designed with re-playability in mind above all else. 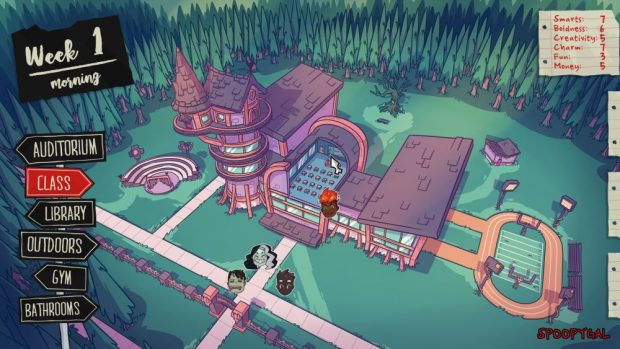 But where Monster Prom truly transforms the dating sim genre is in its four-person multiplayer mode. Choosing where to spend your time would usually be a straightforward decision, but with only one person allowed at each location, the process becomes an exercise in managing limited resources. The cafeteria offers a similar dilemma, with suitors often grouping together at a single table. Sitting with your crush could box another player out for that round, and, especially if you’re both pursuing the same monster, things get competitive quickly. 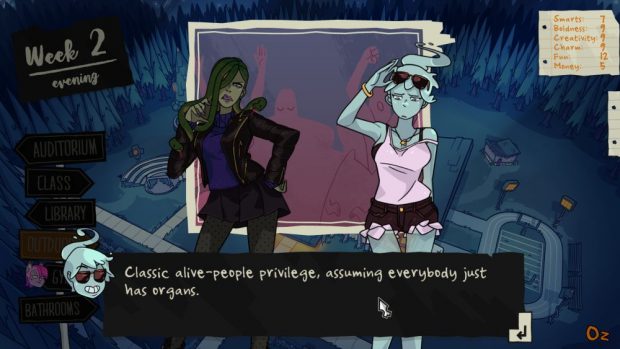 Multiplayer mode also adds special weekend ventures in which randomly selected players can sabotage or boost their friends’ chances with certain monsters. The events centre on typical high school hangouts, like getting together for a public execution of traitorous infidels or a deathday party featuring guillotines and alligators.

At the latter, the socialite spectre Polly asked my friend if my character would die anytime soon, you know, so we could, like, totally chill together in the afterlife. My friend could either respond that I planned to live until a ripe old age or say that I was a risk-taker who Polly could easily take out without anyone suspecting a thing (+1 boldness for possibly inciting a murder).

If only every dialogue option were as straightforward as these moments. On a mechanical level, Monster Prom is surprisingly obtuse. Passing most speech checks requires specific stat levels, and figuring out whether a choice sounds more fun or charming or bold feels like a shot in the dark most attempts. And since requirements seem to increase as the game progresses and each wrong choice costs you points, guessing wrongly too often early on creates a spiral of failure. 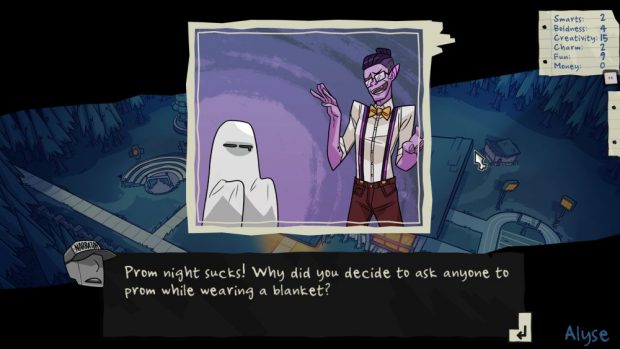 Another feature it fails to outline is how event items can completely lock you out of dating certain characters. Despite spending most of the game with the hipster vampire, he wouldn’t have anything to do with me because I spent the whole time with a blanket over my head pretending to be a ghost. However, one item did net me one of 22 secret endings. After buying a corpse, I wore it on my head the rest of the game, frantically trying to convince my friends it was the hottest new fashion accessory. By the end, I’d spent so much time defending my rotting companion that I couldn’t think of anyone, living or otherwise, better suited to be my prom date. 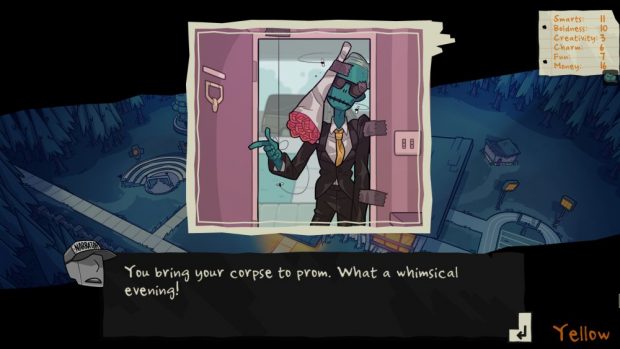 With so many of the variables behind the courting process left up to guesswork, it’s no wonder the only one of my friends to score a date was the person who had never played a dating sim before. Monster Prom’s saving grace is that its hilarious writing makes it a joy to play multiple times until you’ve cracked the formula of its mechanics. And with its hundreds of events and nearly 1,400 different outcomes, most playthroughs unlock new dialogue and storylines.

Maxing out a stat to win over your favorite monster requires spending multiple days at the same location, a tedious process in other dating sims but the writers for Monster Prom packed in enough craziness to ensure each visit is interesting. Heading to the library racks in cash while you mine bitcoin or orchestrate your own gambling ring, and no recess is complete without a spontaneous 300-person rave. In one interaction, the werewolf Scott gains his own following of forest dwellers, or “furries” as he delights in calling them. It sparked a very awkward lesson when my friend didn’t understand the reference.

And repeatedly visiting the same location begins to build a narrative specific to that playthrough. While constantly hitting the gym to raise my charm to Casanova levels, I watched two of the suitors develop their own anti-sport: Artball (where there are no points, because the best score is the one in our hearts). By the next visit, the entire team was playing a match, though they had to summon Vincent Van Ghoul to help establish some ground rules. One of my favorite of these mini-stories was helping Miranda the mermaid discover Tinder and walking her through how to properly respond to the dreaded “hey.”

It may take a few tries to discover how to land a date, but playing Monster Prom is some of the most fun you’ll have trying to figure out a game’s mechanics. By making the goal competitive in multiplayer, it challenges the dating sim genre in a wholly unique way, and its combinations of events and endings make every playthrough feel like it’s your first time (this is the part where I wink suggestively).